Jeff Tucker continues to fly around his home state and, this time, he takes a look at FlightBeam’s joint-venture project with iBlueYonder.

Hey Sim fans! If you’ve been watching the HeliSimmer.com website, you probably got a chance to see my review of ORBX’s great TrueEarth Oregon series.

Well, I have a surprise for fans of the Pacific Northwest, FlightBeam Studios has released a fully compatible Portland International (KPDX)!

What makes this airport so special?

Well, if you remember in the TE Oregon review, one of the disappointments I mentioned was that KPDX is one of the gateways to the Pacific Northwest Region. Along with Seattle-Tacoma International (KSEA), those two airports handle a majority of major flights into and out of the region. 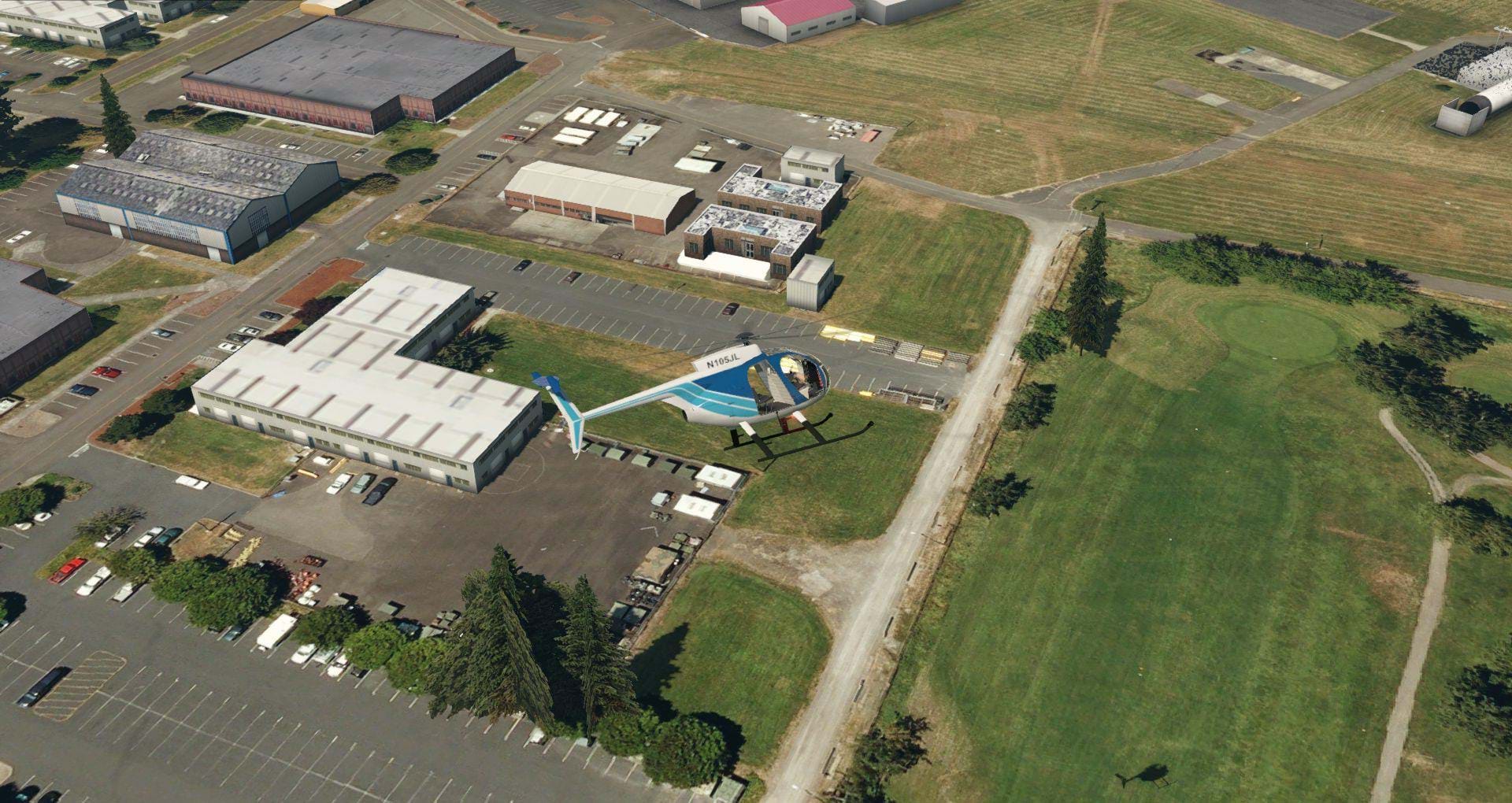 Flying low over the National Guard base, one can easily see how exquisitely detailed and corrected the ortho scenery is.

FlightBeam’s KPDX is one of those gateways and the fact that it seamlessly integrates with ORBX’s scenery just makes it all the better – but wait, there’s more.

If you’ve been in the simulation community for a bit, you’ve likely heard the name Bill Womack. Amongst scenery development circles, he’s kind of a big deal and rightly so. Bill started his flight simulator development career back in 2003 with some amazing Alaska Bush sceneries for FS2002.

Over the years, Bill has honed his craft through several different simulators and is now widely recognized as one of the greatest contributors of high-quality and performance-friendly sceneries available. Plum Island (2B2), Nantucket Island (KACK), Pearson Field and many ORBX Pay ware airports all have Bill’s hands finely crafting a rich and inviting atmosphere that really captures the spirit of General Aviation and the aviation community as a whole.

Home of the Redhawks! The 142d Fighter Wing now flies F-15C’s and have for a few decades. Don’t call the number on the billboard unless you really want to join the National Guard.

Really, that’s what always makes Bill’s sceneries so captivating to fly around, I feel they really truly capture the community involvement that is such a hallmark in General Aviation.

FlightBeam Studios , founded in 2009, joined forces on this project with iBlueYonder , Bill’s own company that he started in 2013, to meticulously handcraft the entire airport and local surrounding region and then integrate it into ORBX’s TE framework. Bill himself took many of the source photos used to create the airport and with help from the airport manager, faithfully reproduced the airport to exacting detail. 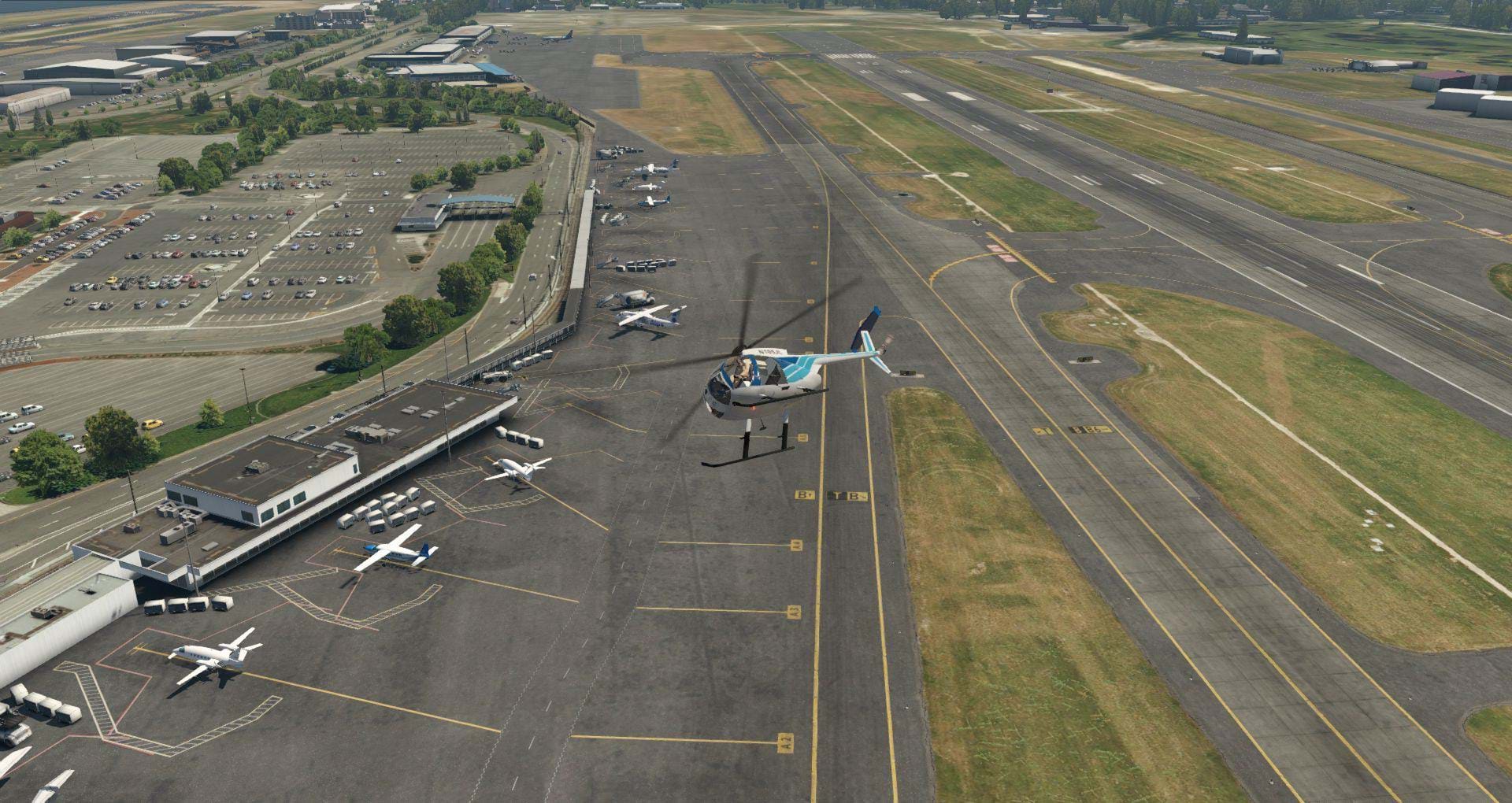 Detail of the beautifully-rendered airport ground textures and accurate taxi diagrams. Nothing is out of place except Piaggio Avanti’s and Swiss Alps planes are not usually parked there, its usually Dash-8’s or CRJ’s.

For a bit about Portland International, it was originally founded in 1926 as the Swan Island Municipal airport before being dedicated by Charles Lindbergh in 1927.

The airport was situated North West of downtown Portland just on the edge of the mighty Columbia river. By 1935, it was apparent to The Port of Portland that the airport was inadequate for the traffic it was serving thus starting several upgrade programs. Those upgrade programs were desperately needed during the Depression-Era economic slump and employed over a thousand men to help bring the airport to modern standards. 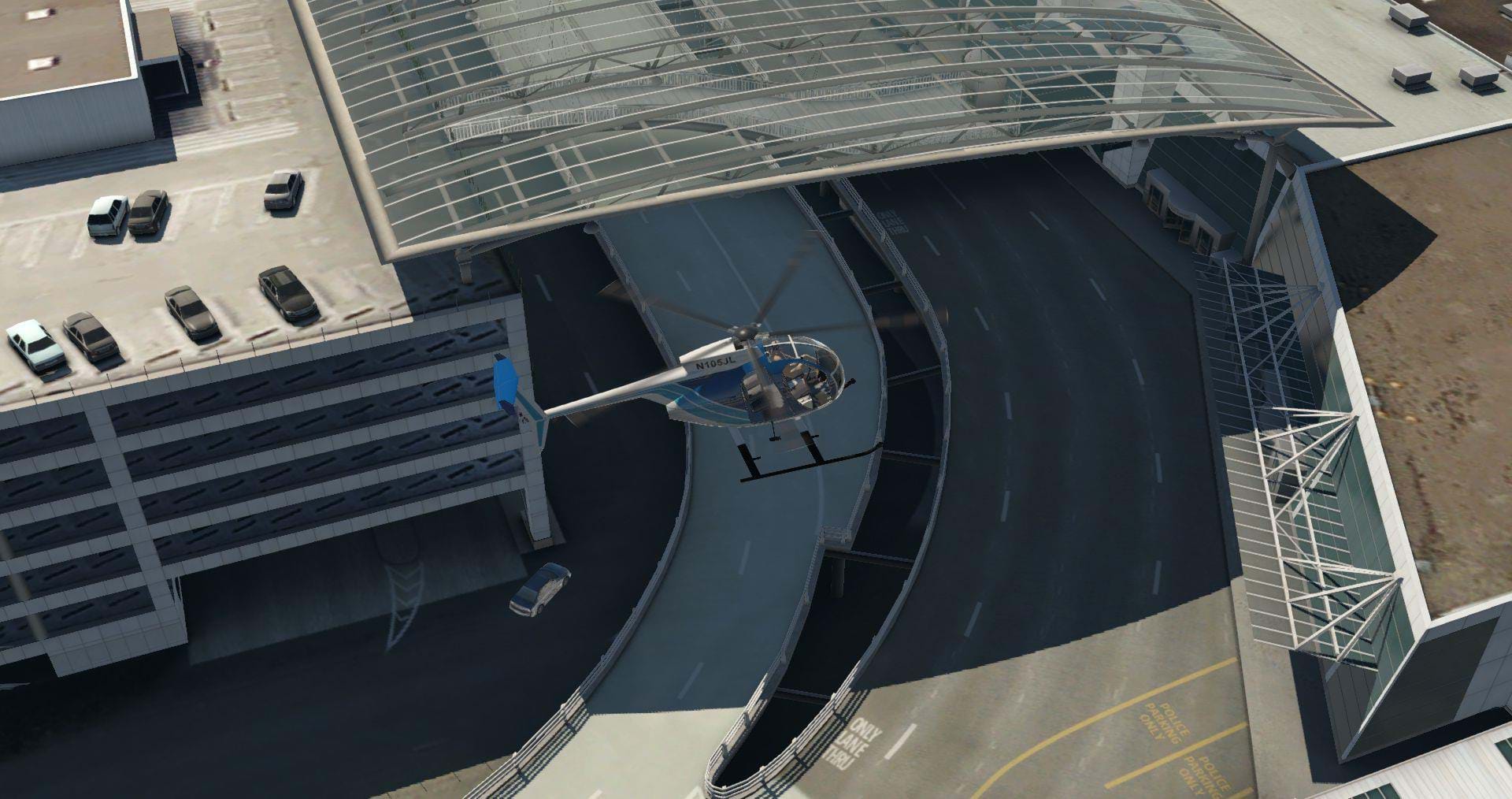 The 1950’s saw the opening of a new terminal which was then further upgraded 1980’s. KPDX has seen steady expansion since. Portland International now encompasses 3,000 square acres and handles 90% of the passenger transport into and out of the region.

For a bit of personal history, KPDX secures a firm hold in my own memories. I still remember being just a boy and one of my favorite outings was when my father would finally relent to my pestering and we would make the 40-minute drive to the airport. Back in the early 90’s, there was a stretch of gravel along Marine Drive where airport watchers could park and watch departures and arrivals.

We would sit there for hours, me with my toy planes and my dad would point out various airlines or (later) I would tell him about which airliner was taking off or landing. On lucky days, we would go walk the concourses (this was prior to some of the strict airport security implementations post 9/11) where I could get a closer look at the large aircraft. So needless to say, this airport is pretty important to me. 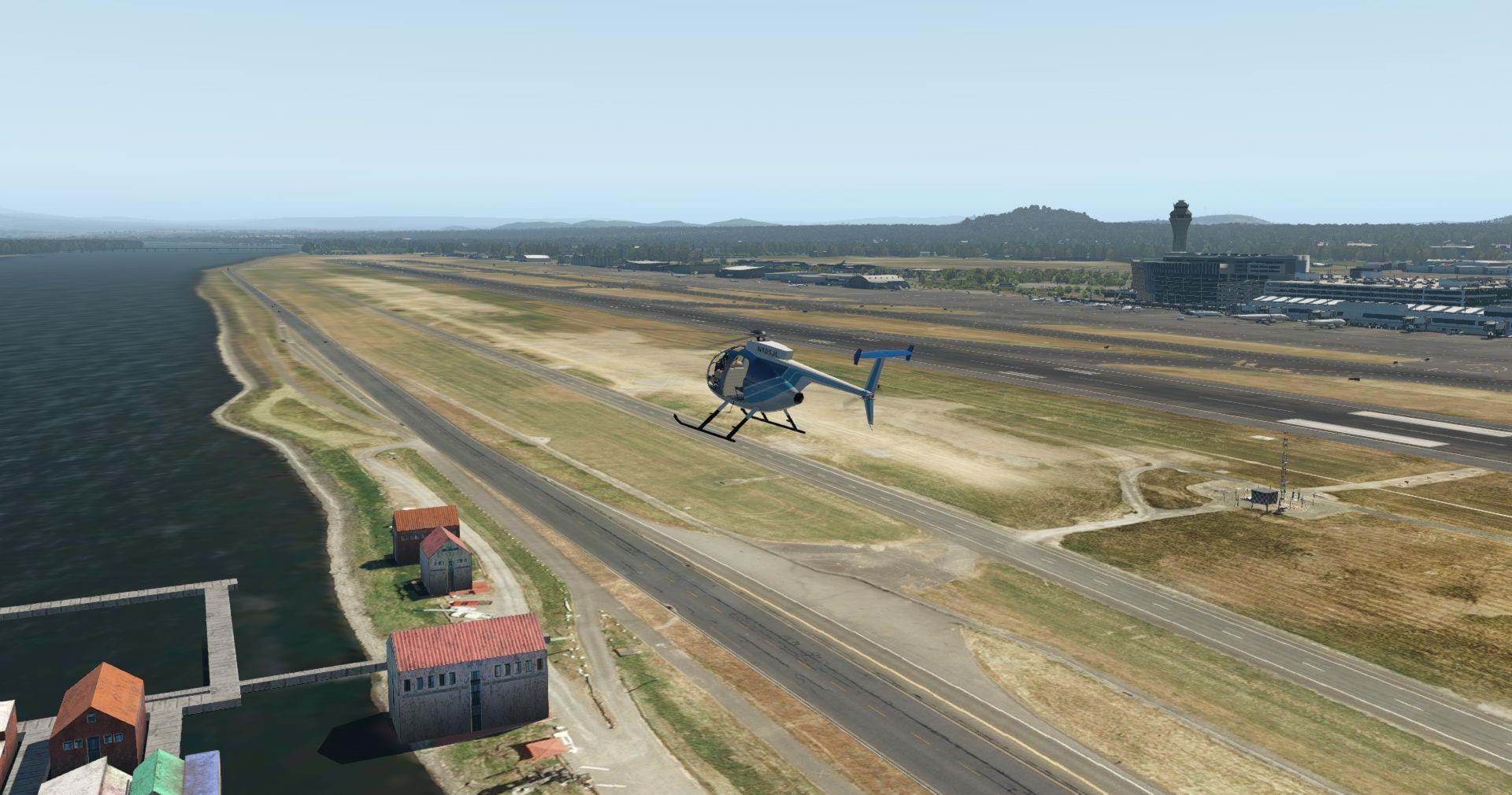 FlightBeam and Mr. Womack didn’t disappoint. I was extremely pleased to be offered the opportunity to review this scenery and I’m sure my (over?) excitement shows.

Installation was a breeze on account of FlightBeam’s auto-installer. Upon firing up the simulator, the first thing the user notices immediately is Bill’s almost obsessive attention to detail. Key textures at the airport are rendered in 4096x4096 high resolution and utilize PBR for much of the facilities.

Additionally, FlightBeam’s SAM plugin enables real-time marshallers, gate animations and some hangar door animations. SAM works seamlessly with X Plane 11 and installs with the scenery package. To get a gate to function, park the airplane, remove fuel flow and turn off the anti-collision light and the gates sequence. 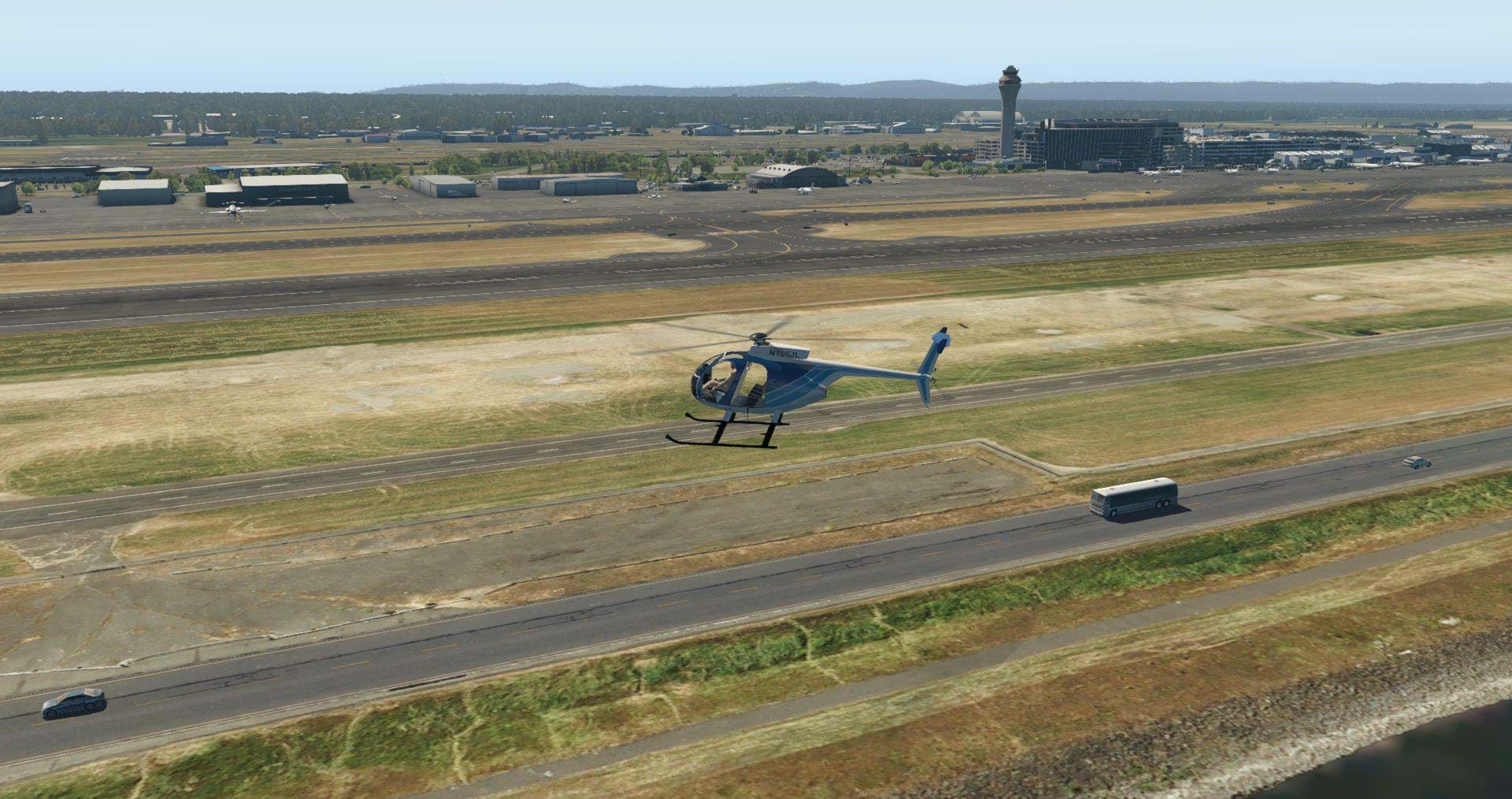 Marine Drive and the (now closed) airport watchers parking that I have such fond memories of.

High resolution orthophotos cover all the surrounding ground texture and it is a treat to look at. One of the key features of Bill’s work is that his ortho textures are always crisp and beautifully corrected to really give an accurate reflection of the surface.

Since larger airports are often a visitor first stop in a new state, that’s where a particular state can give their first impression to new business and tourism. Portland International is no different and the extensive terminal upgrades and traffic flow is no exception. 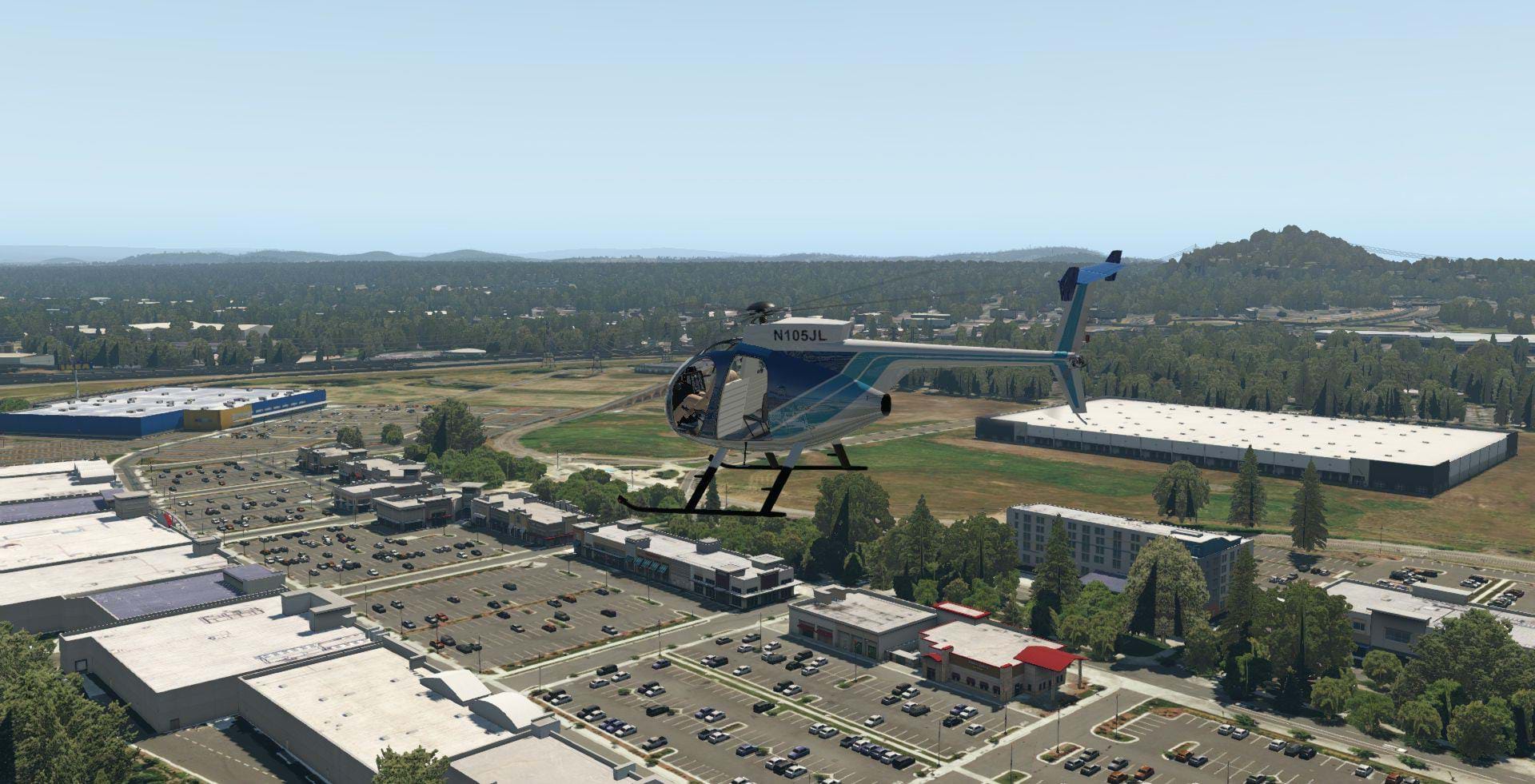 The Cascade Mall just east of the airport….hmm, this gives me an idea.

Often, in most simulators, those details are lost on default scenery or just ignored. Not with FlightBeam or Mr. Womack; specifically, a lot of care and detail went into faithfully reproducing the terminal, connecting service buildings and least of all, the portions of the airport where people will interact with aircraft.

Terminal buildings texturing, jetways, marshal and service vehicles, aprons and hangars are all beautifully crafted using photography often taken by Bill himself. Along with a working relationship with the airport manager, Bill was able to get access to several structures that most average visitors never get to see and faithfully reproduced them as well.

Sadly, I discovered that all this amazing attention to detail in conjunction with ORBX TE Oregon took a significant impact on my framerates in VR (after further discussion with Bill, it seems the culprit here is, indeed ORBX’s TE). I would get five frames per second (FPS) or less at the airport or flying around with the camera pointed toward Portland proper. In normal view with the sliders turned all the way up, I could easily still achieve 25-30 FPS and no stuttering.

Maybe this Best Buy has the new Thrustmaster F/A-18C stick in stock! Nope…

What is there to do for helicopters though?!

Well, true international airports are not really helicopter-friendly. Often, we just do more to clog up the airspace and slow the ebb and flow of fixed-wing traffic. But, if like me, you fly more than helicopters on your sim, then this airport is a must have.

Coincidently, there is no better way to explore all the details Bill included other than by helicopter. But so much more than that, the helicopter industry thrives in this region. Portland-Troutdale (KTTD), is a short 5-minute flight from the ramp at KPDX and serves as the gate-keeper for the glorious Columbia River Gorge, one of the most scenic helicopter flights on the west coast. Portland-Troutdale is also home to Hillsboro Helicopters helicopter training branch and Portland provides a wonderful opportunity for student pilots to get their first taste of busy airspace. 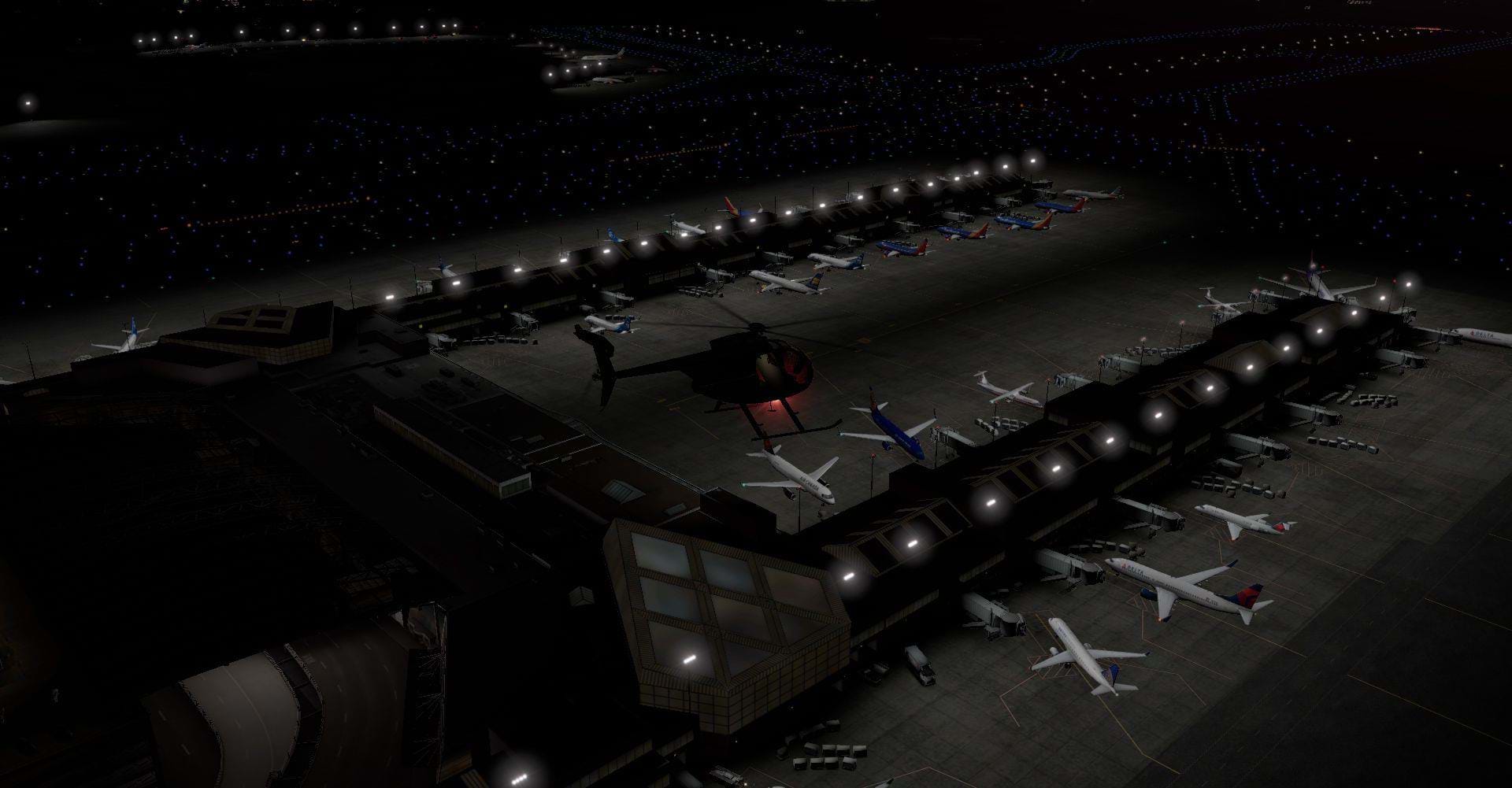 Beautiful night lighting throughout lends to the immersion.

Additionally, with downtown Portland only being a short 10 minutes away, KPDX serves as a great starting point for people wishing to explore their new ORBX TE Oregon scenery.

Is there anything that is specifically focused for helicopters at KPDX? Sadly, there isn’t; but in Mr. Womack’s defense, KPDX doesn’t really have any facilities that are purely-helicopter focused and he stayed pretty true to the actual KPDX so I didn’t expect anything special in that regard. (PS: Bill, if you want to do KTTD or KHIO next as they are helicopter heavy, let me know and we can get you all the source photo’s you need). 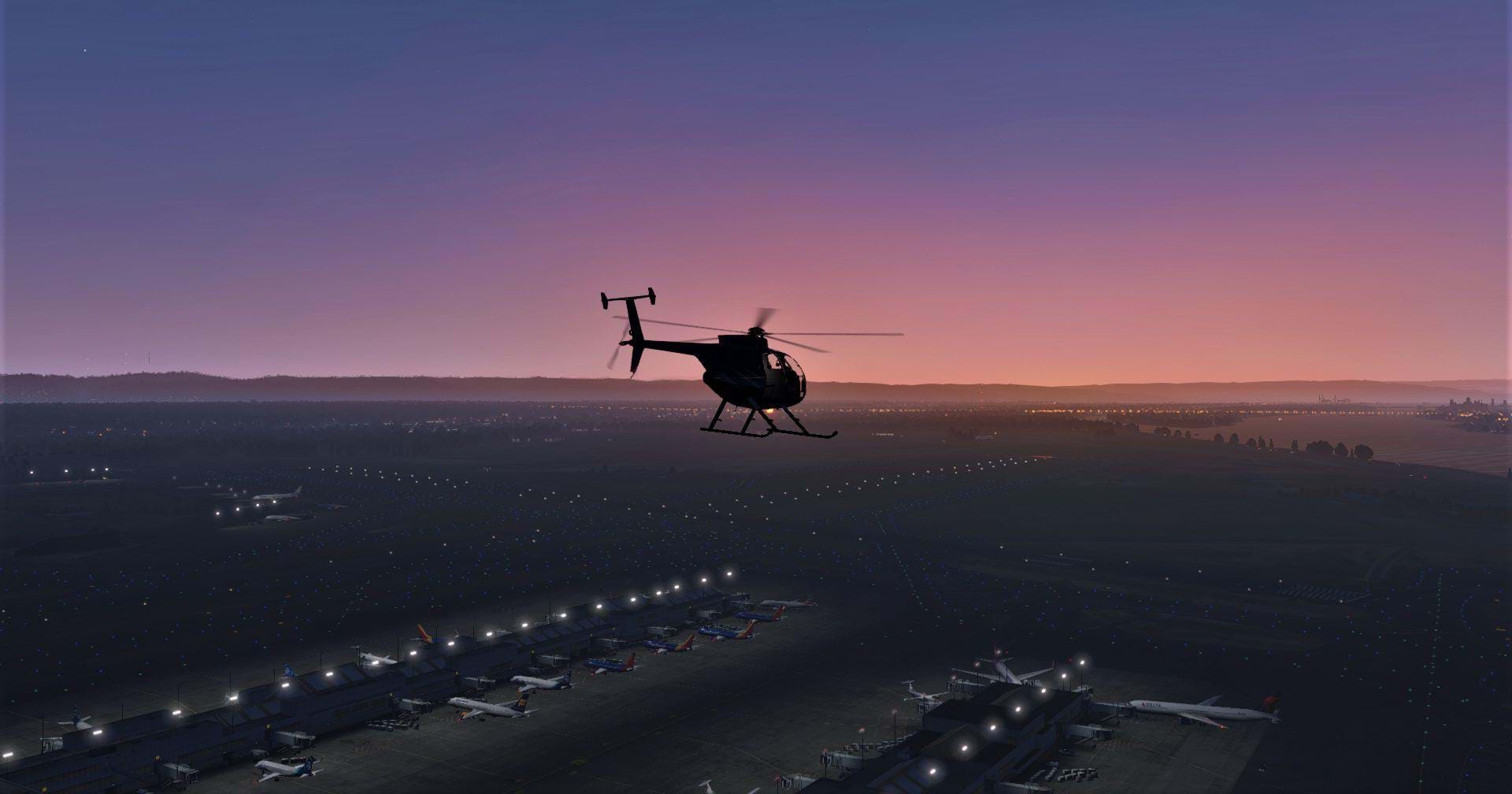 FlightBeam Studios and iBlueYonder make a match made in heaven by providing a high-quality, beautifully rendered rendition of KPDX that fits in with the TE Oregon and gives simulator pilots the perfect gateway to explore this expansive and purely breath-taking region. High-resolution textures and PBR work exquisitely places the pilot, airline or GA, into an immersive and well-executed region.

Installation 10
Mesh 10
Textures 9
Buildings 10
Frame rate impact 7
Total score
9
* The above final rating is calculated from a weighted average and not the direct arithmetic average. This means that some elements of the review will have a higher influence in the final score than others.
Click here to purchase/download or more information