With VR, sims definitely became more immersive as they put us “inside the cockpit” but that immersion breaks once we start using devices such as a mouse to interact with buttons, knobs and other panel tidbits. So, we start dreaming of having our hands in the sim. 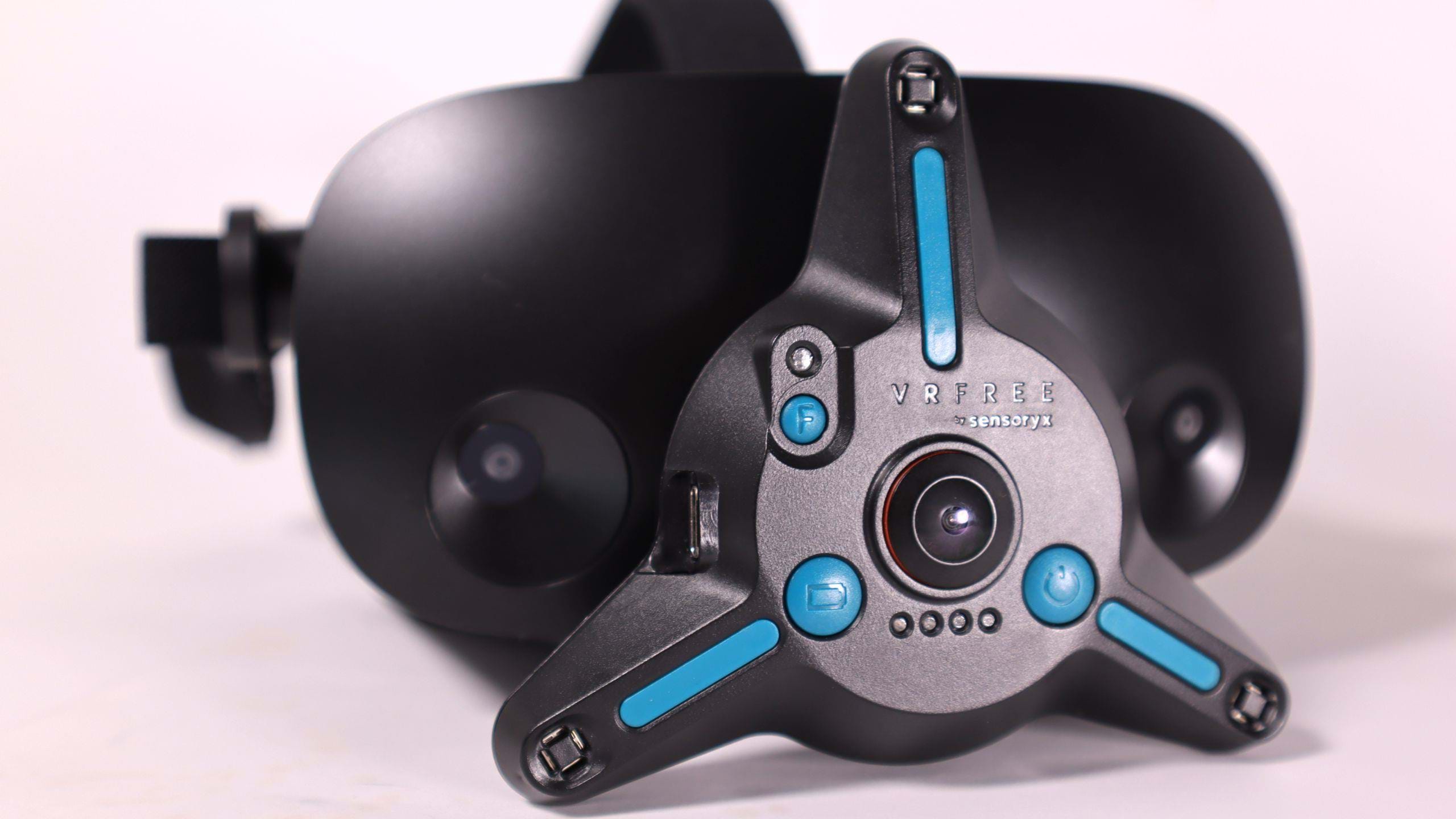 And therefore, some companies have done so, with several types of solutions. Sensoryx has being one of the companies that has been helping spearhead the progress of such solutions and they have released quite an advanced (and complex solution): the VRfree gloves .

I have been following their progress for some time, watching every bit of news and all the videos that came out and, 4 months ago, I finally saw something Sensoryx had been waiting for quite some time: native support for DCS (you can watch their video below).

And so, it was time for me to take a look at it and at native support.

Sensoryx sent me a new version of their kit, I set it all up, and sat inside the cockpit.

All right, this is the hard part. Setting the VRfree gloves is going to take you a while as there are a few steps that you need to follow. Do make sure to follow the instructions slowly and calmly. If you miss something, you may need to redo it. 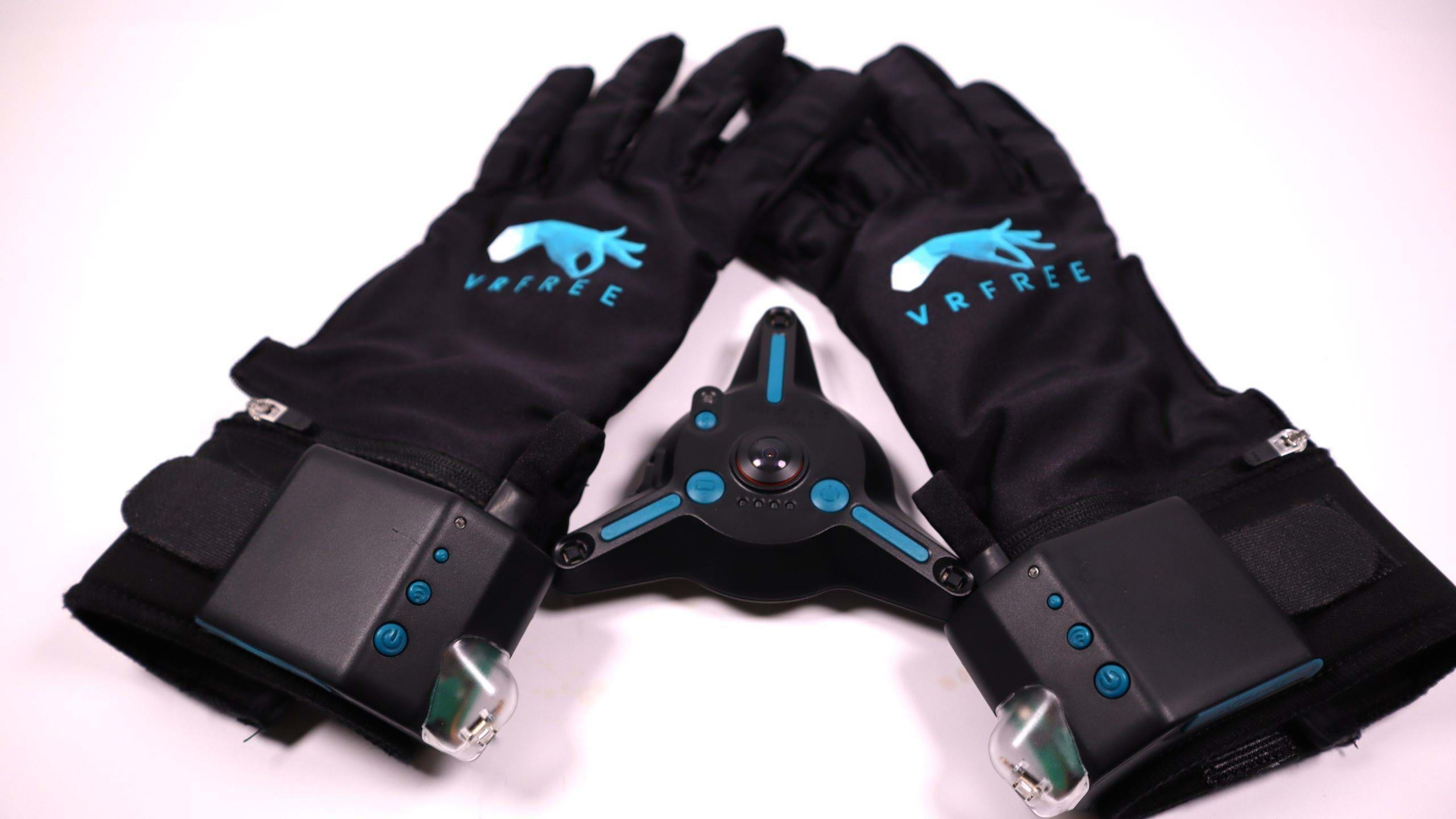 You must first actually assemble all the different parts, and that’s not really a big deal. Just follow the instructions.

The rest of the process is the hard part. I have to say that, between getting myself tangled on the cables and my own inability to take these steps smoothly and with precision, I had to go through the whole process a few times and, honestly, I am still not quite happy about it. For now, it’s working and that’s what matters the most. 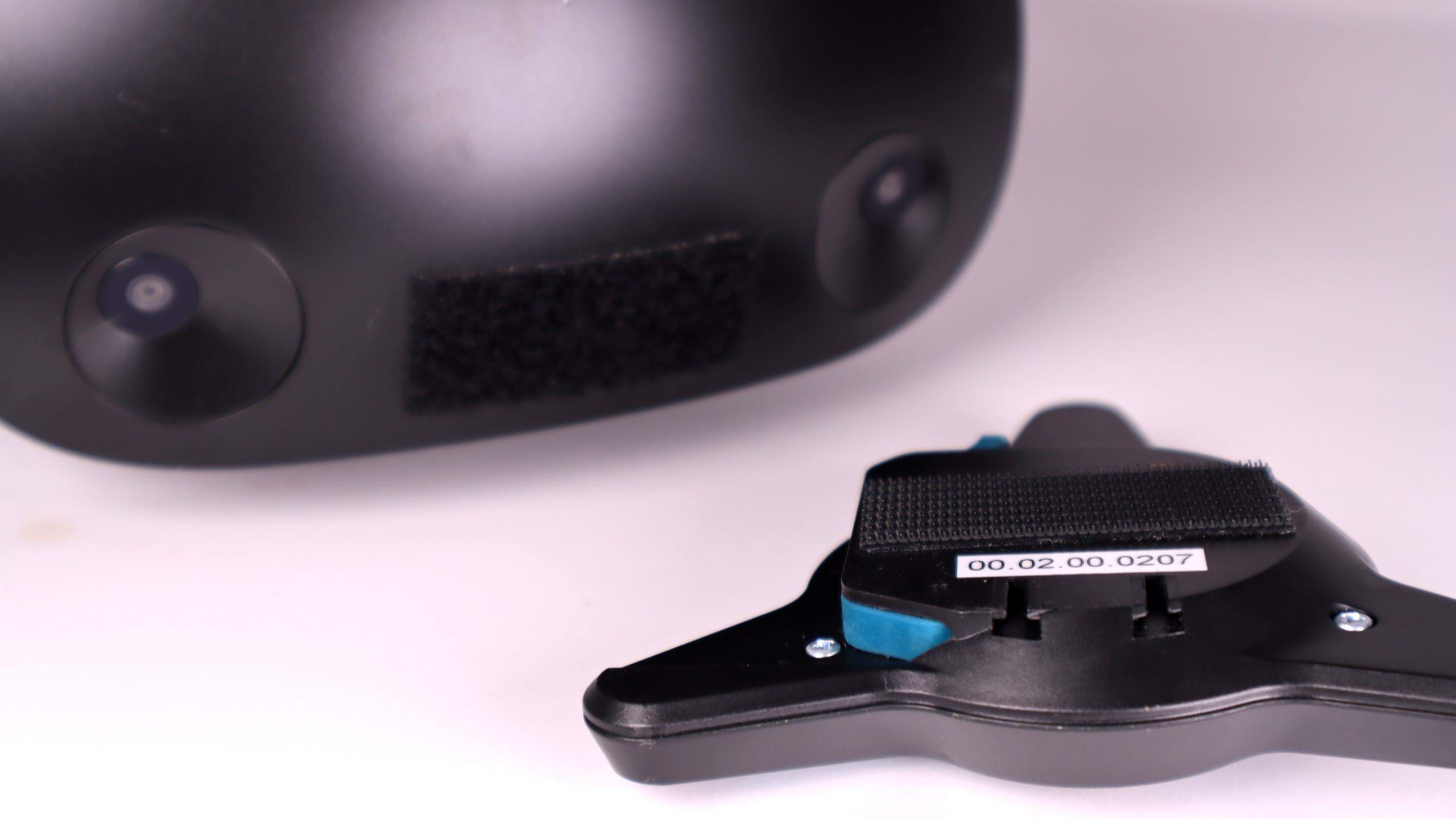 Just keep in mind that there’s no way you can skip the manual and the tutorial videos on this one, trust me.

I will leave a few links here for your reference. Make sure you check it all out:

I don't want to make it look a lot harder than it is but we are talking about a high-precision system here and everything needs to get properly calibrated. The thing is: we're talking about quite a few moving parts. And I mean that literally.

Setting things up in DCS 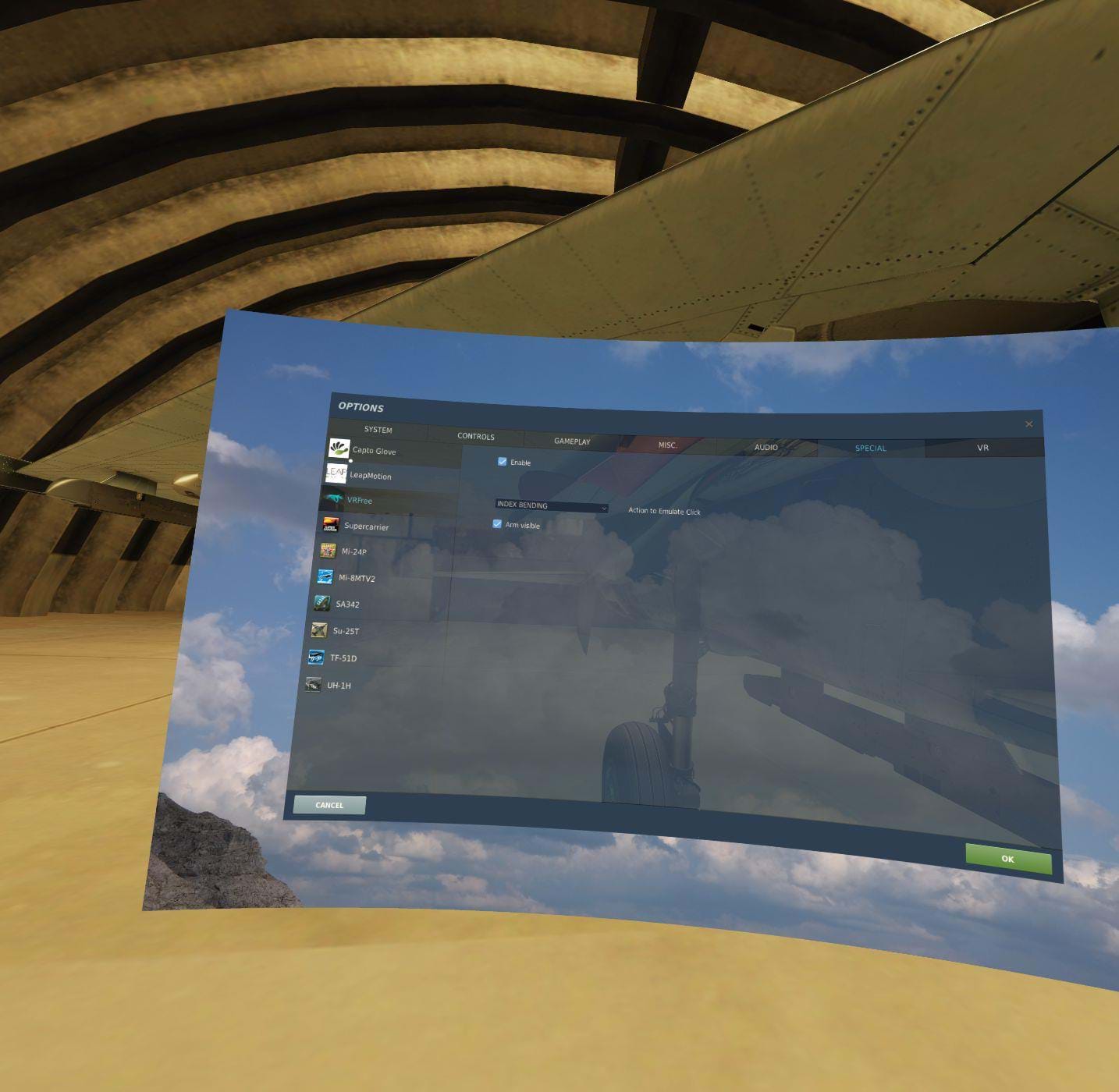 After you set things up in Sensoryx’s own software, it’s time to let DCS know what you’re up to.

Enter the options menu and, on the top, you’ll see SPECIAL and VR. Let’s start with SPECIAL and then select the “VRFree” option on the left.

Enable and set the rest to your liking. The “Action to Emulate Click” setting is used for the “laser” ED added to the gloves, meaning you can point at something and “click” on it. I really couldn’t get it to work but, honestly, what I wanted to do was to pretend like I’m flipping switches, not pointing at them remotely. So, I left it as it is.

I did choose to get my “Arm visible” though, of course.

The second thing is to enter the VR option and make sure you have “Tap controls with your fingertip to activate”. And that’s pretty much it. 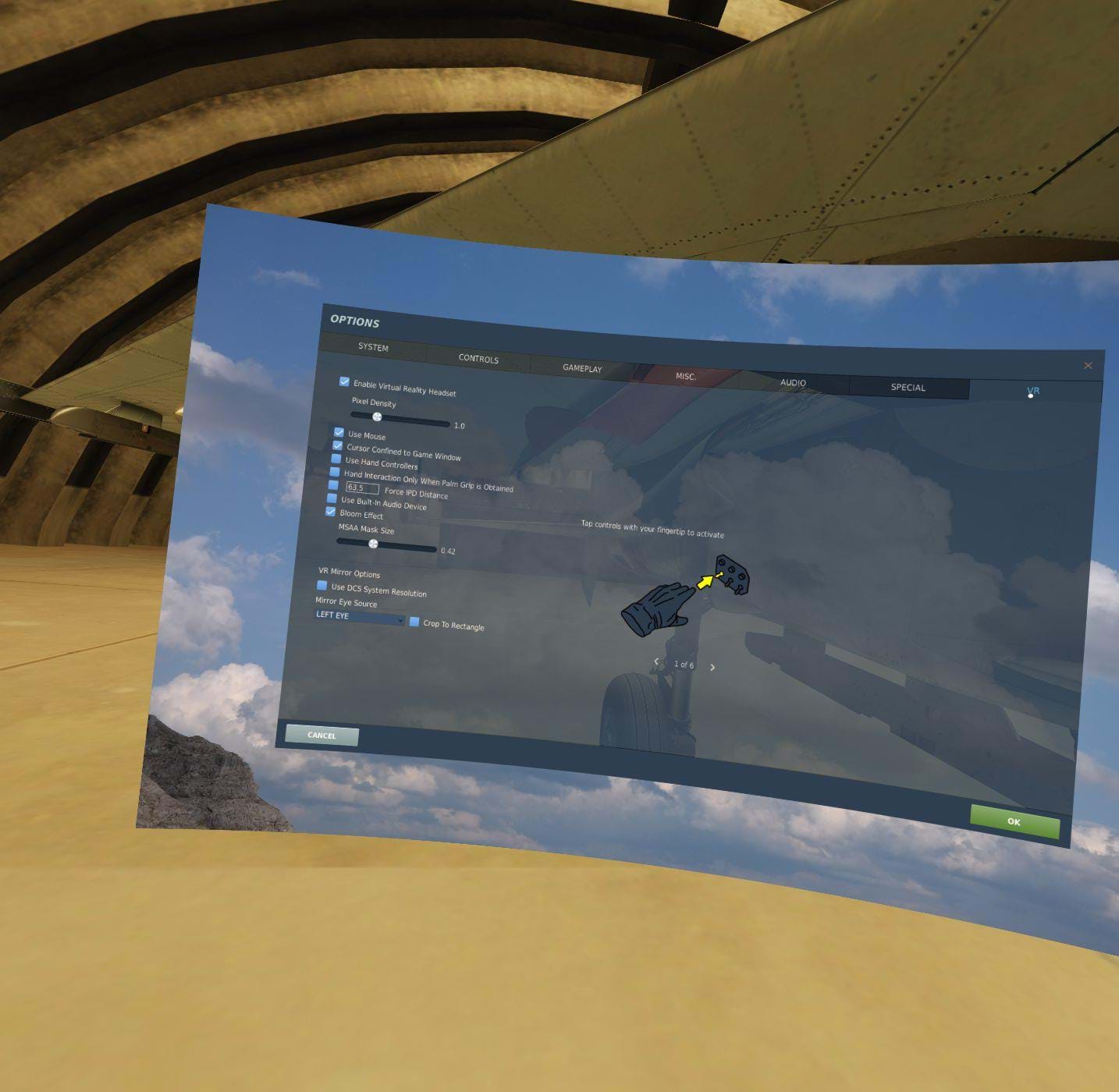 No, really, it is. Inside DCS, that’s all you need to do. 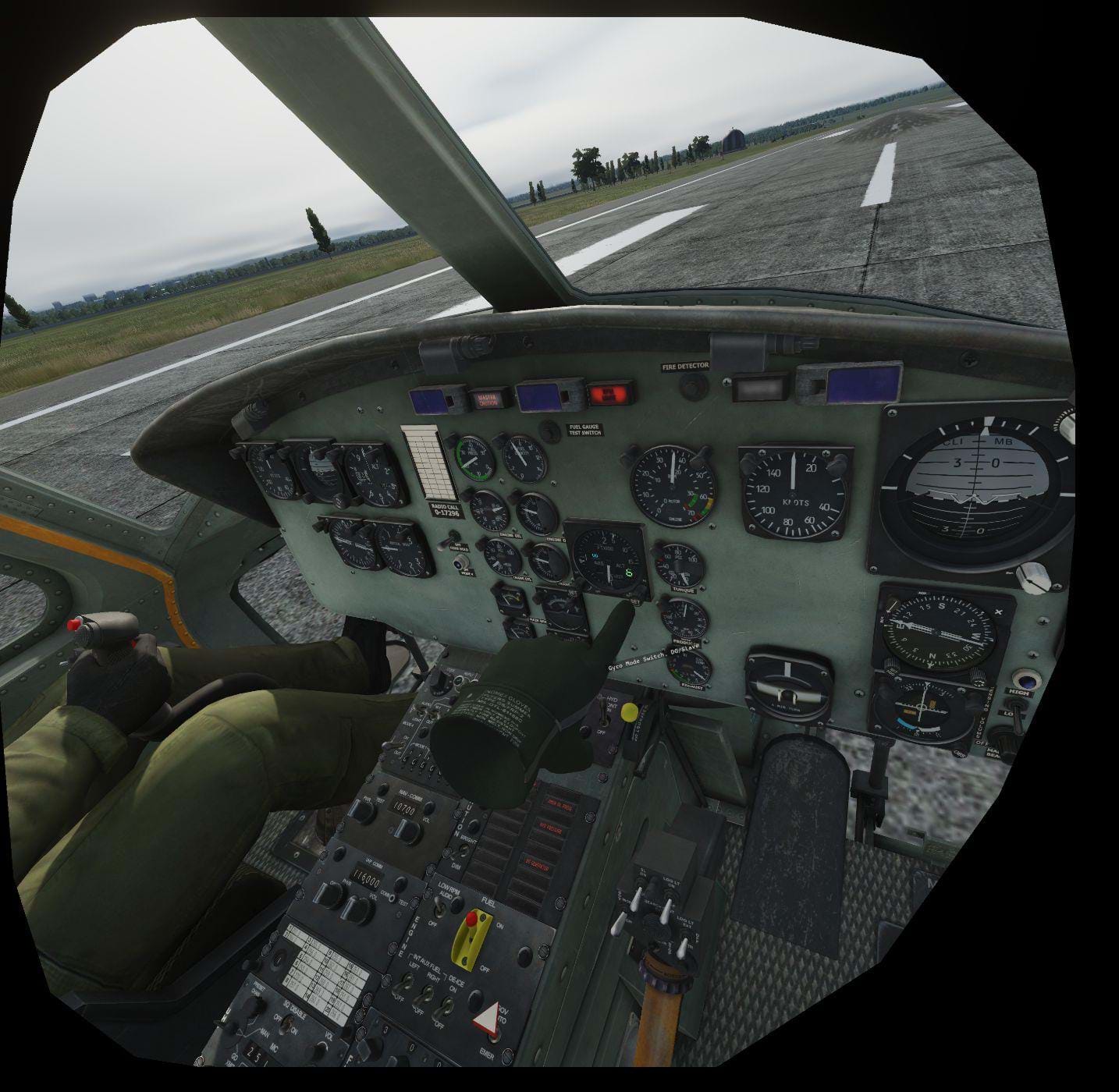 I was really eager to give it a try, so I got into the Huey and start screwing things, clicking on all clickables, flipping all the flippables and rotating all the rotatables. Pretty much leaving the panel a complete and utter mess.

Which means: it works!

It takes a bit of time to get used to it (don’t leave your finger on a switch constantly, for example, as it will start flipping in both directions like crazy), but it’s usable.

Even the rotary buttons work a LOT better than I was anticipating. These are always a big messy to deal with, but they just… Worked!!!

I entered a new flight and started the Huey from cold and dark to airborne and back to the airfield, all while just using my hands. Yes, I did mess up a bit here and there before I got used to it, still, I was able to control everything with my fingers. 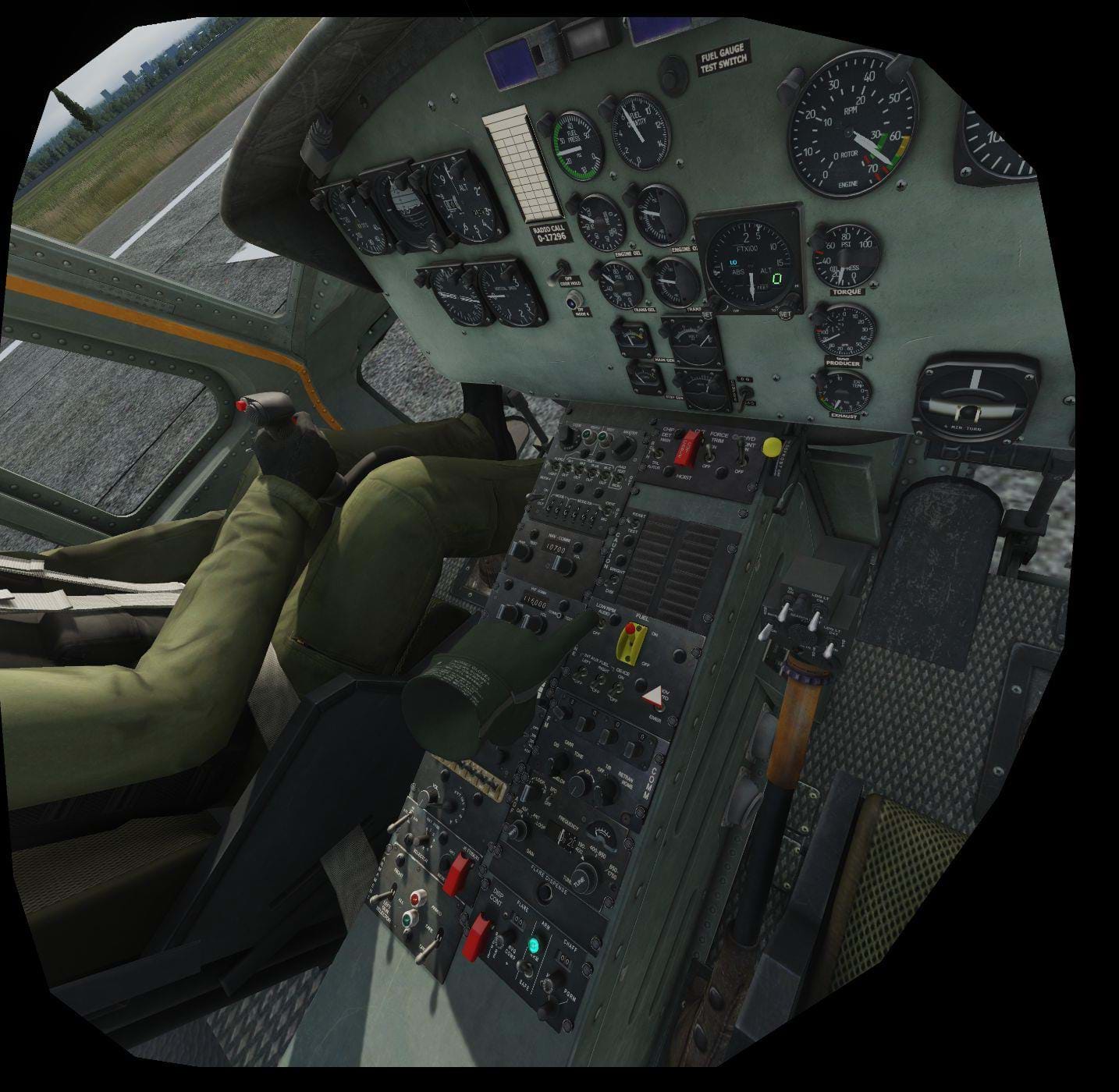 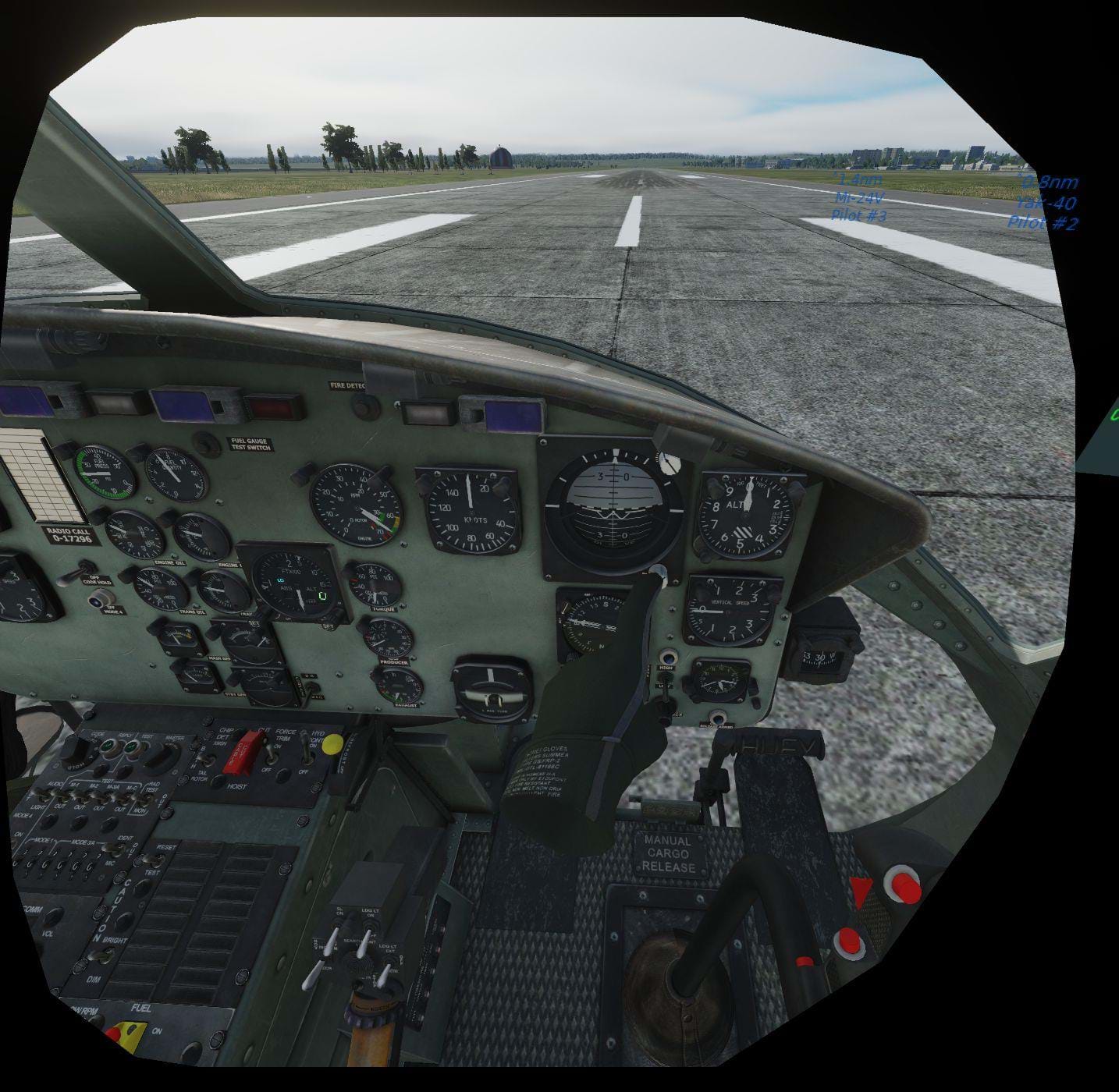 I needed to lean forward a bit sometimes, of course (we also have to on a real helicopter) so make sure you have plenty of room in front of you. Don’t be like me and almost break a finger against your desk. You have been warned.

Me, my HP Reverb G2, the Pro Flight Trainer Puma and the Sensoryx VRfree. I could just place it all in the middle of the room and have a blast.

(I think my wife wouldn't like to read that last paragraph)

Before I got my Reverb G2 unit, I had tried it with my HTC Vive and the non-native plugin. I have to confess I had less issues with the Vive back then, but it was a blast already. Not having to rely on another software layer (something I also mention further down the road on this article) is a bless.

The Sensoryx gloves are responsive and quite precise. Switches, buttons and knobs in a cockpit sim are not exactly giant objects and I managed to hit most of them. Of course, it takes time and getting used to it, but, eventually, we get the hang of it.

Here's another important detail, for the VR helicopter pilots: most of us are right-handed, meaning we use our mice with the right hand. How many times did you have to control your cyclic with your left hand so you could interact with the cockpit, making it awkward? I almost crashed a few times because of it (on occasions where I was not trimmed, for example).

With the Sensoryx VRfree gloves, we can use the left hand to directly interact with the cockpit, never removing the right hand from the cyclic. And that, right there, is a major win for me.

I would like to have the ability to change something, though: after some time, you start to feel your hands hot because, well… You’re using gloves, right? I wish there was a version in which we could have a lighter/cooler way of controlling things with our hands. Between these and the headset, we are starting to get really warm and cozy. In situations of stress, which happens sometimes in DCS, it may become a bit uncomfortable.

My thoughts on the technology

All right, here’s the thing:

The technology is not easy to develop and it’s really not that easy to use. I had a hard time getting everything calibrated and ready and, like I said before, I am still not 100% happy about it.

I blame it partially on myself and the fact that I may not be taking the steps and doing all the movements correctly (take a look at the setup videos and you’ll know what I mean). I also blame the technology, of course. If it didn’t need all that stuff, I wouldn’t be showing my ineptitude to myself and possibly the world (trust me, those hand poses on the screenshots are a lot uglier if you look from the other side of the hand).

Unfortunately, we need to live with the shortcomings and what it’s needed to make it work.

But here’s the thing: it works. And that blew my mind when I got it to work after solving a few issues, including a problem with my Reverb G2, which prevented me from leaning forward and accessing the panel.

There are a lot of moving parts with these technologies. The amount of software layers we have is incredible. In my case there’s Windows Mixed Reality (WMR), SteamVR + SteamVR for WMR, DCS, Sensoryx’s drivers in the middle, the actual headset, the gloves and main unit, there’s just a lot of stuff that work their magic. It’s absolutely incredible that all this works together. 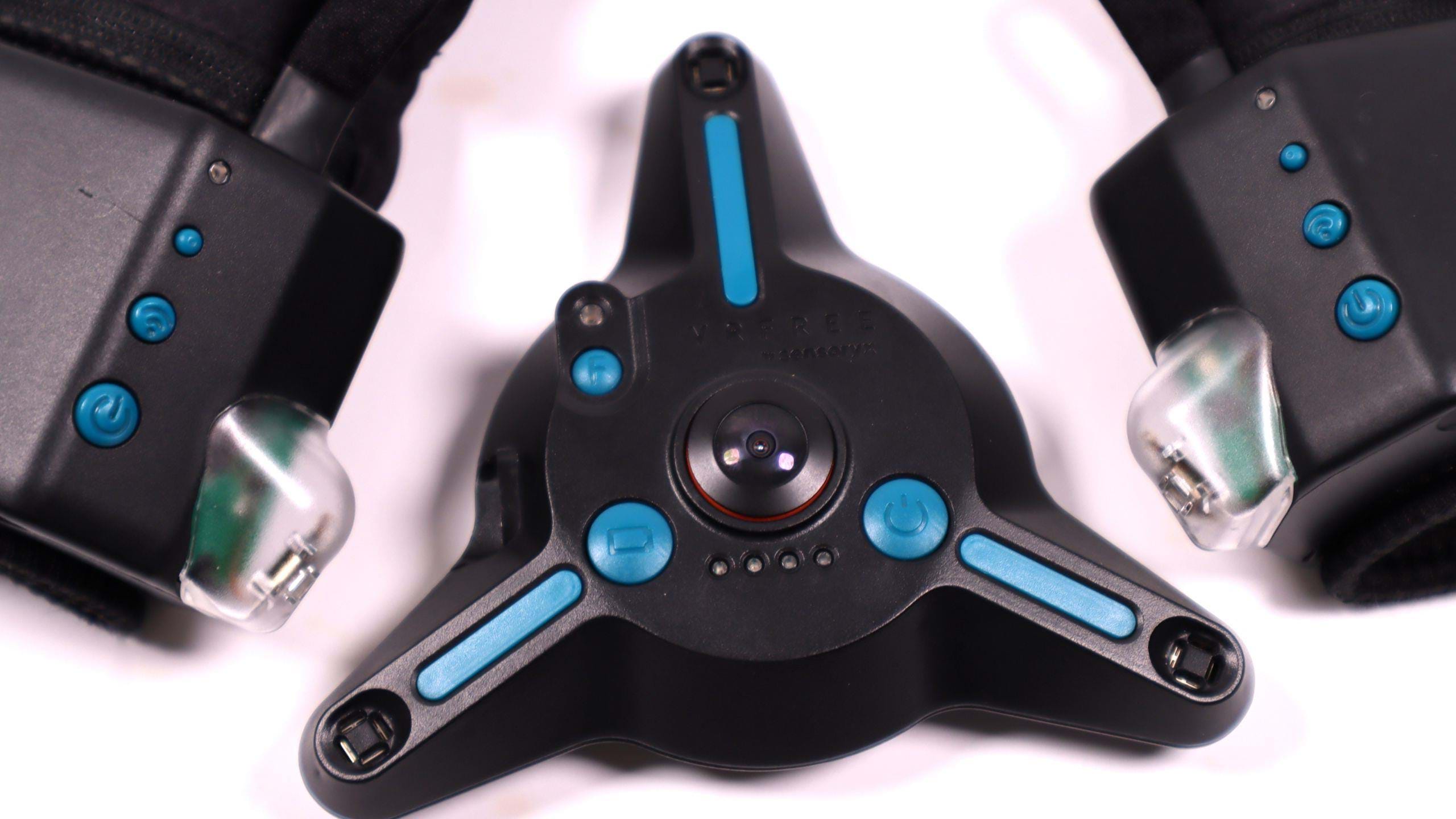 I’ll be honest you all of you and tell you that this is not an easy investment to make. And it’s also not a foolproof piece of technology. It does come with a price tag that a lot of you won’t find interesting and, like any other recent technology, you’ll find its quirks and issues.

Nonetheless, if you are one of those guys that likes to be an early adopter, you have the money and you want to increase your immersion in the sim by quite a bit, these types of solutions are the way to go.

I must admit that I have no other experience except with the Sensoryx VRfree gloves but, despite a hard setup curve, once it works, it’s just an amazing extra layer that lets you dive right into the sim and enjoy it in a more “realistic way”.

Like I was saying above, sit yourself in the middle of a room with your controls, your VR headset and the Sensoryx VRfree gloves and that’s pretty much all you need. Yes, you could do the same with your mouse but come on! This is, definitely a lot more fun! And immersive.

Cut to the chase here! Would you recommend it?

That is really a hard question. And not because the hardware doesn't do a good job. That has nothing to do with it.

Here's the thing: if we were talking about something that was really cheap, I would definitely tell you to go for it. I will not put a price tag on what I think would be considered cheap because I really don't want to insult Sensoryx. I understand all this technology is expensive. Between the hardware, software, R&D, marketing, production capacity, etc. all this adds up REALLY fast and in quite a steep curve. I don't believe producing these is cheap at all.

For the price, though (CHF750 or the equivalent in your currency) it's hard to go ahead and "recommend it", right out of the bat, with a huge smile on my face, because the price tag doesn't help me here. But, again, I don't think that's Sensoryx's fault. This is expensive technology.

Nonetheless, if you already have an amazing gaming rig, your controllers, a good headset and you have the extra money to spare, I can definitely say this is something you should be taking a look at. If the money is not an issue for you, yes, then yes, I do recommend it.