How do you improve something that’s already pretty darn good? Can you even do it? Can you turn a 10 into 11? Spoiler alert: yes, you can.

I love little gems. I love those small little things that improve your simming (I also love the big ones, by the way, so feel free to send me a full-size helicopter cockpit!).

Be it quality of life improvements, gadgets that allow you to better control your helicopters or small modifications to existing hardware, sometimes it’s the little things, those little gems, that manage to put a smile on my face.

And it so happens that I am about to tell you about one of those little gems that actually cross all the 3 checkboxes above. It’s a quality-of-life improvement, it allows for better control of helicopters and it’s a modification to something you may already have in your simpit.

You may remember K-51, a Russian fellow simmer that has developed an affordable collective , based on VIRPIL electronics. And by “affordable” I am not saying it’s “cheap” as in “it’s of bad quality”. It is affordable, yes, but the quality is quite decent.

You can read our full review on the K-51 collective here but the bottom-line is: it’s a great product and it’s not just us saying. Everyone I’ve been talking to that has purchased the collective says the same: they are very happy with it.

Well, K-51 is back. A few weeks ago, we got word that something new was coming out from his shop: a modification for the VIRPIL pedals .

That left me curious but also skeptical. What could it possibly be done on a rudder pedal system that was already very good? I mean, without making it an actual helicopter anti-torque pedal? The VIRPIL pedals ( we reviewed the VPC Warbrd rudder pedals ) are not made for helicopters but they can be easily adapted, and I specifically requested the Warbrd because it was the simplest one in the family. If this can do it, its big brothers can as well.

And it can do it. I gave it a 10 out of 10 and was really impressed by the quality and adaptability of the pedals.

So, yeah… A modification? Oh, and K-51 was even bolder in his statement (well, OK he was really humble about it, but I am adding a bit of flair and drama here to prevent you from falling asleep). He said it could improve the use of pedals in helicopters.

Call me curious. Well, call me even more curious.

K-51 told me he had come up with a system that would allow to add friction to the pedals so that we could either counteract the spring or add a bit of, well… friction, as we pushed the pedal with no spring.

If you read the review I did on the pedals, I of course mention the fact that we can remove the spring of the pedals easily, which is something I value a lot since most helicopters don’t have a centering mechanism. The anti-torque pedals are either connected directly, hydraulically or through electric systems but whatever the system used, you always feel some pressure against your feet as you push the pedals.

Remove the spring on the VIRPIL pedals and that pressure is gone. You will need to counter it with the other foot so that you don’t push the pedal all the way to the front and get yourself into virtual trouble.

Having a way to have that pressure AND control how much I can have it on the pedal is certainly something that got my attention because that would make the 10 out of 10 pedals… An 11? Something like that? OK perhaps not an 11, because we don’t have that on our rating scale, but it would definitely improve the pedals a lot.

Of course, I got really interested in it. And curious, not only about how much of a difference it would make, how fluid it would be (we don’t want any weird jumps on any of the controls), how difficult it would be for us to modify the pedals and how would that cost.

This modification is sold as a DIY kit, meaning K-51 sends you a nice package by mail which include a few parts (the kit), some instructions, and you’ll need to get your Philips screwdriver, some Allen keys, and find a place to install the said kit.

Scary? Yeah. I didn’t like the idea of disassembling the pedals either. But here’s the thing: the instructions are quite clear and the VIRPIL pedals are really well built.

They are built as a mechanical asset. I can’t really explain it, but the hardware is done in a way that messing with it makes me feel safe. I don’t feel I am going to break anything, there are no weird parts that break as you take them apart, no glued pieces that come off and you don’t know how to glue them back, nothing.

It’s just metal parts bolted together. You do need to have some care with some of the nuts of the base as they can drop on the floor when you remove the rubber feet but that was the only thing that I really had to be very careful about as not to lose them. Other than that, it was really nice and simple.

I pushed that fear aside and went for it.

What does it actually do 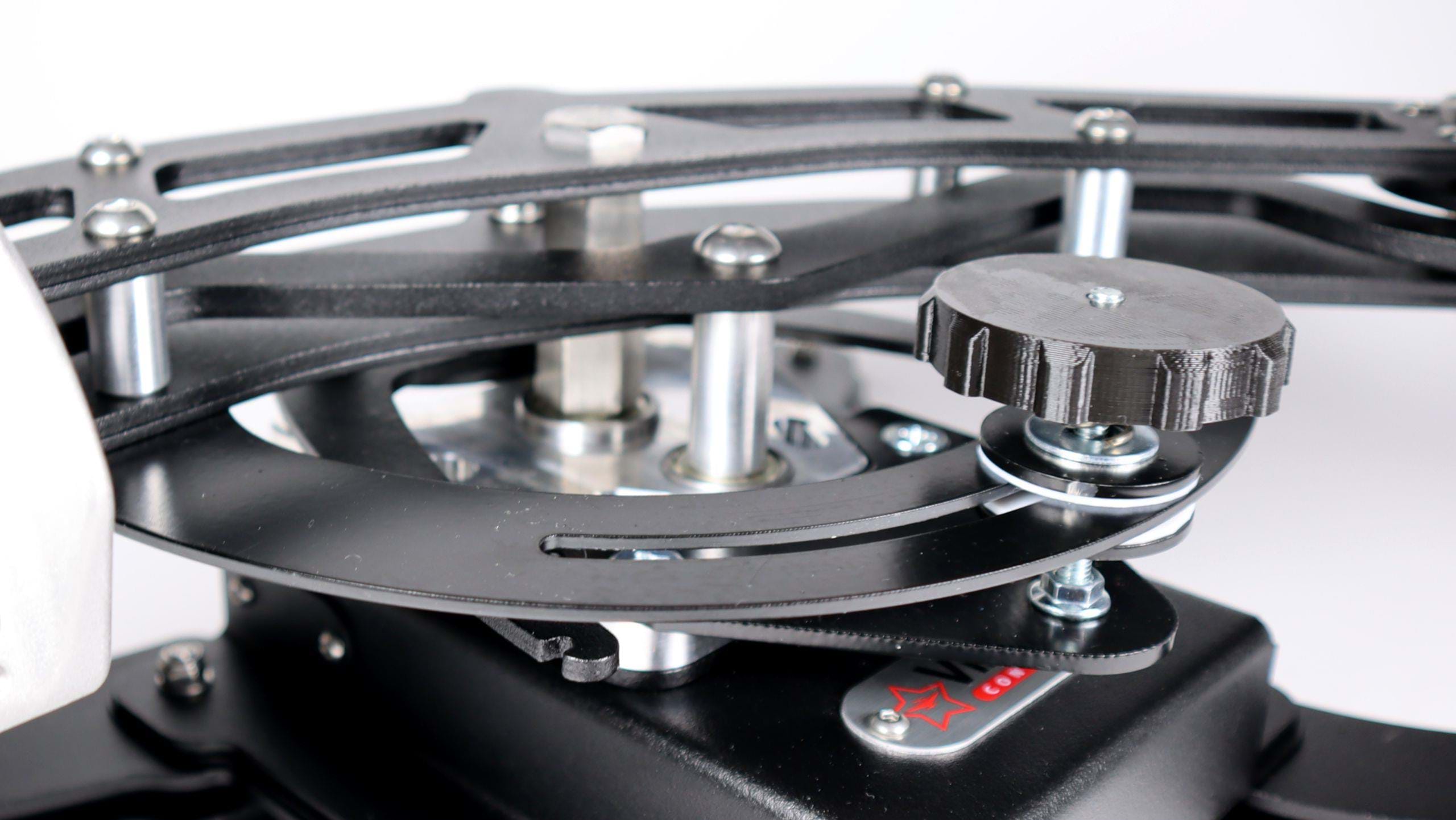 In a nutshell, this kit will have you assemble an arch which will attach to the moving part of the pedals and a fixed part which will work as a “sandwich” with that said arch in between 2 nylon washers. 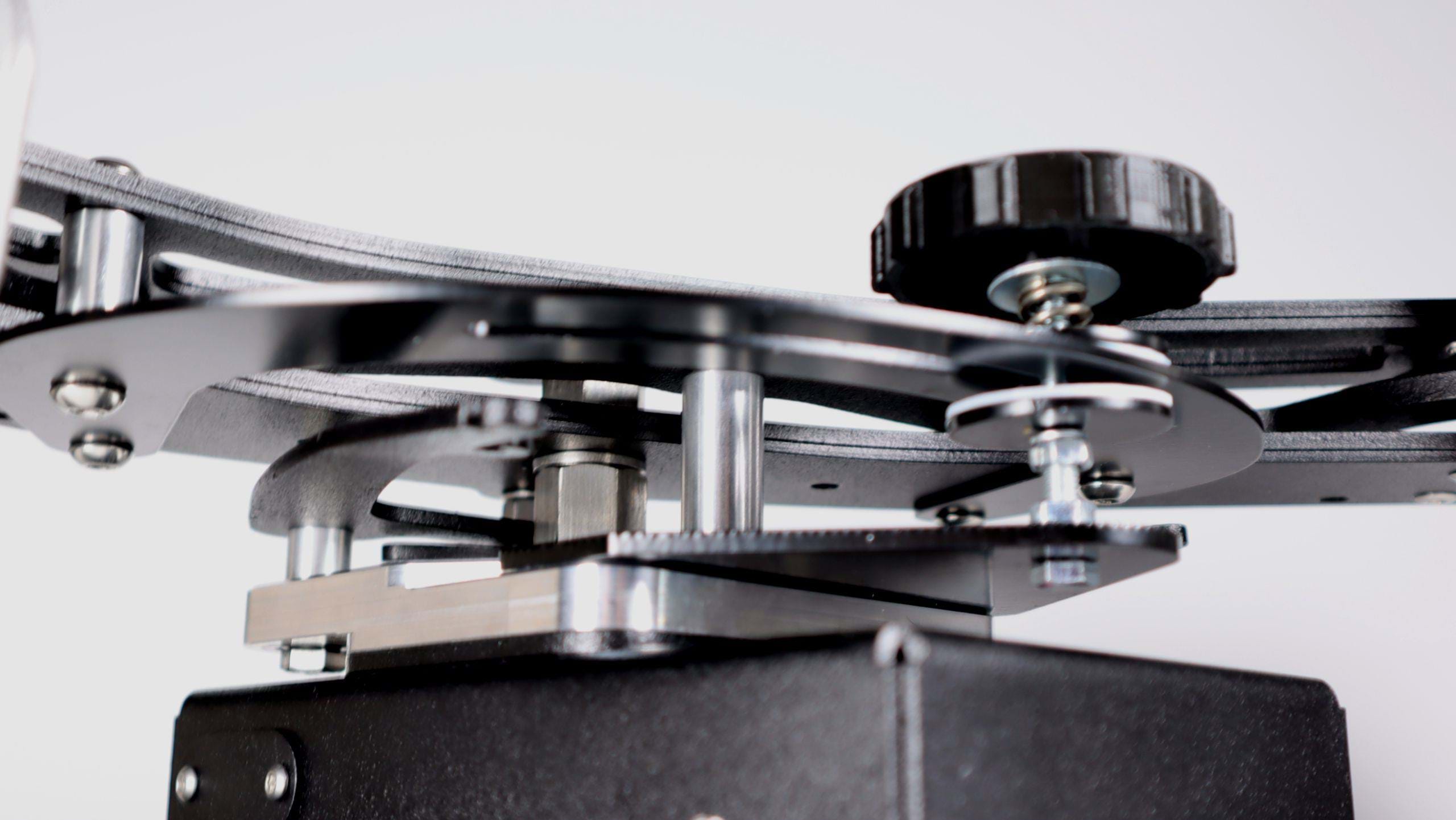 By tightening or loosening that “sandwich” you will increase or decrease friction on the arch, making it harder or easier to move the pedals. All very smoothly too.

And it works. Simple. Genius.

What’s in the kit 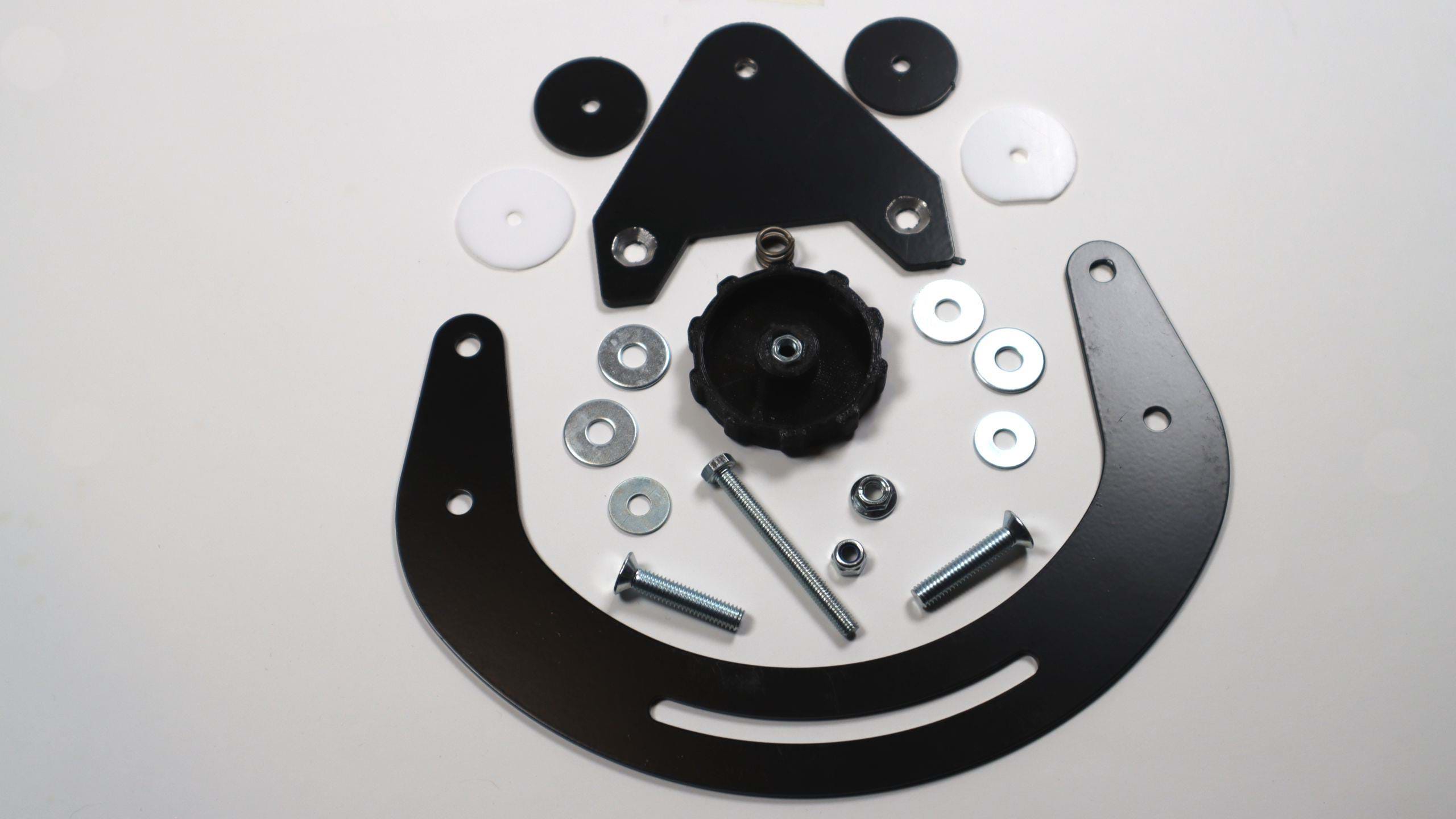 The kit is comprised of a couple of flat metal pieces, a few screws and nuts, metal and nylon washers, a small spring and a plastic handle which you use to loosen or tighten the damper system.

When I started assembling it, everything fell nicely into place. The dimensions are all correct, K-51 sends you everything you need, and I never felt like I was harming the pedal in any way.

The black parts are smooth and have a nice glossy coat on them. They look nice with the pedal.

I took me about an hour or so to assemble it as I was taking it very slow and had a few interruptions now and then. I didn’t want to rush it anyway, so I took my time in assembling it. 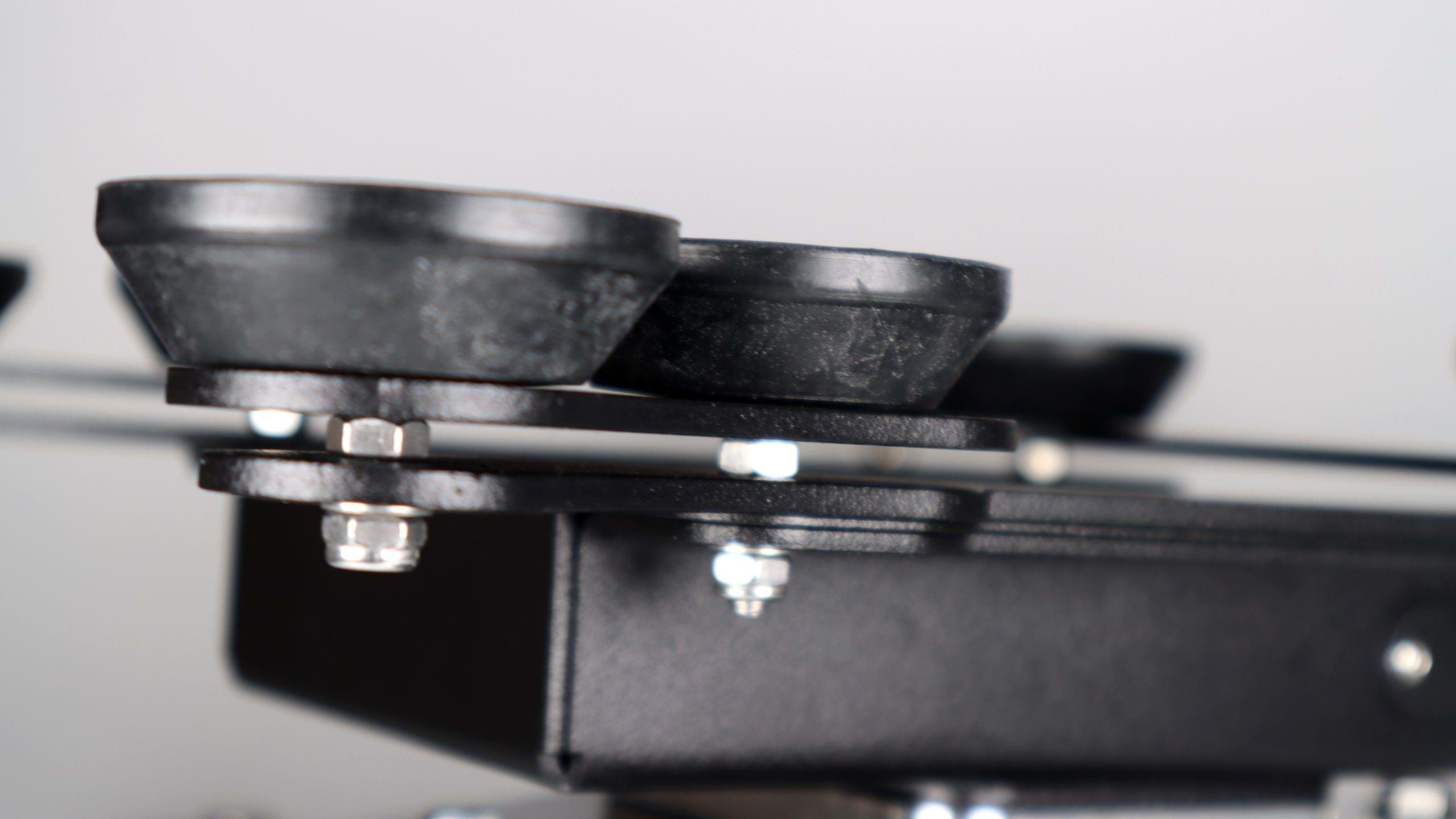 Be careful with the little nuts in between the plates. If you completely remove the rubber feet, they can move and fall. It's not too hard to put them back but it's time-consuming – and you can actually lose one of these easily as they are small.

Like I said, the instructions were clear and the assembly pretty uneventful (again, beware of the nuts hidden between the base plates – they will fall down if you completely remove the rubber feet).

As you probably know, you can place the fooplates at different distances from the center, for increased comfort and convenience. 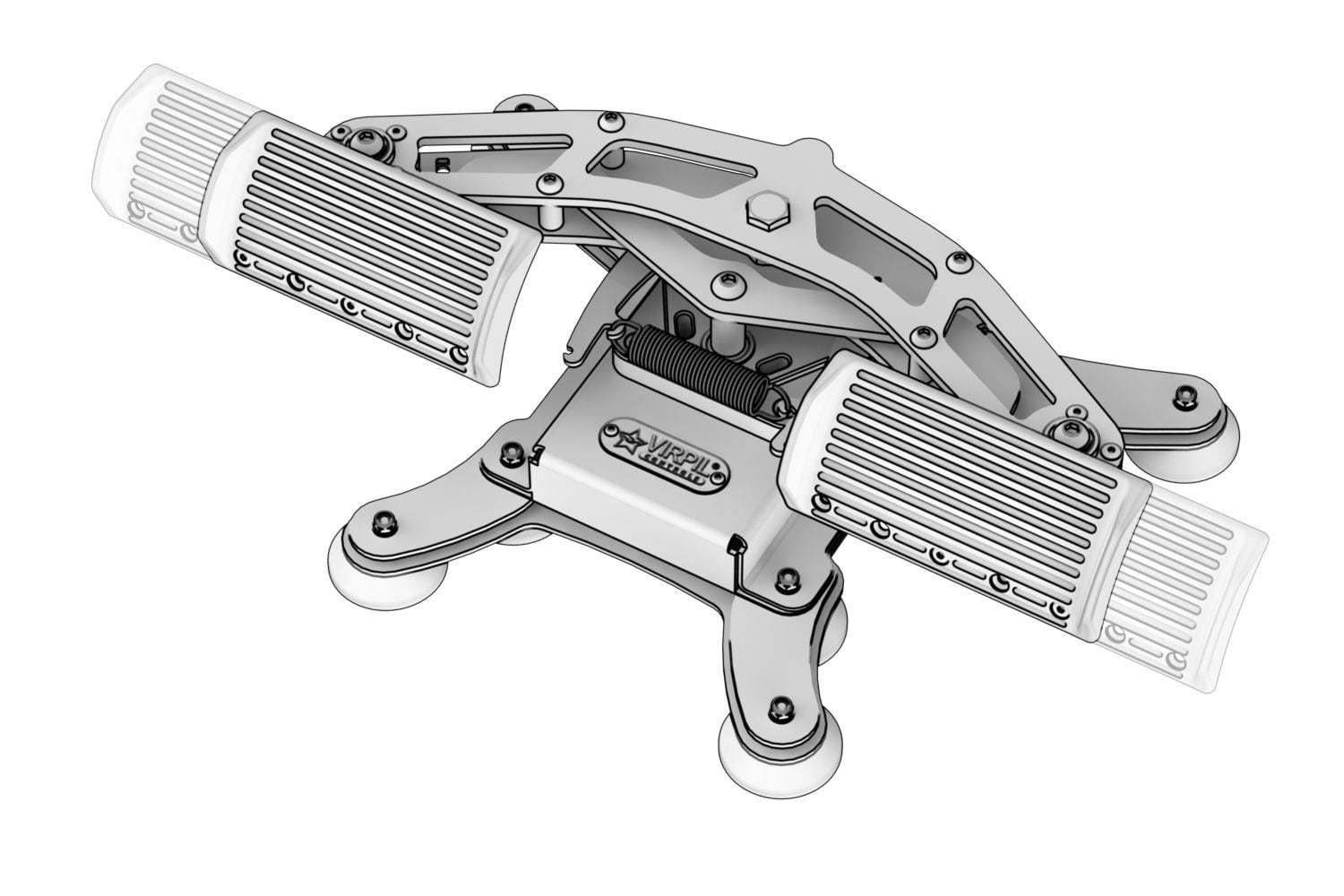 With this modification, though, you will have to place the footplates in the outmost position, otherwise it will either touch the “arch” or not fit at all. 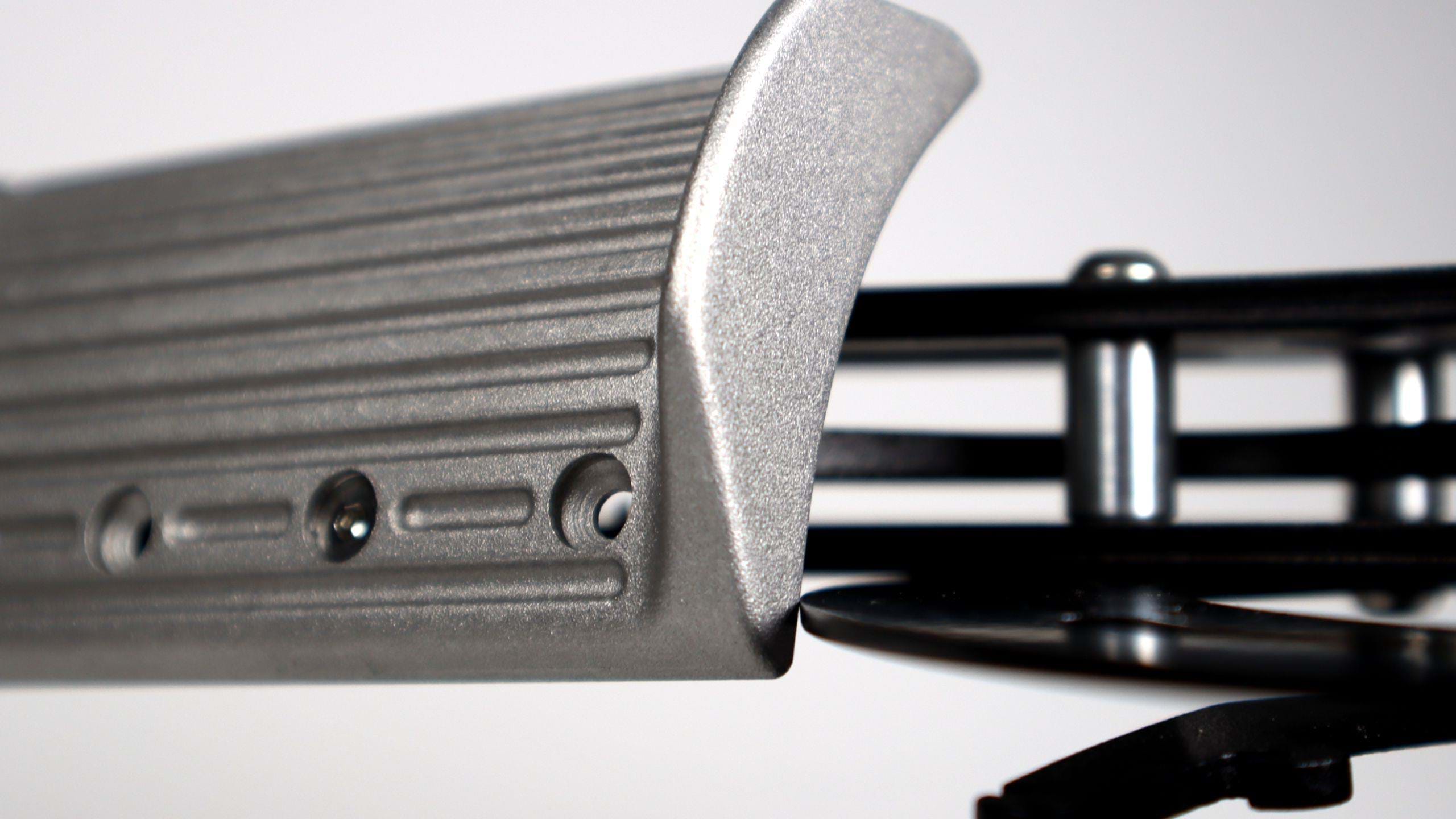 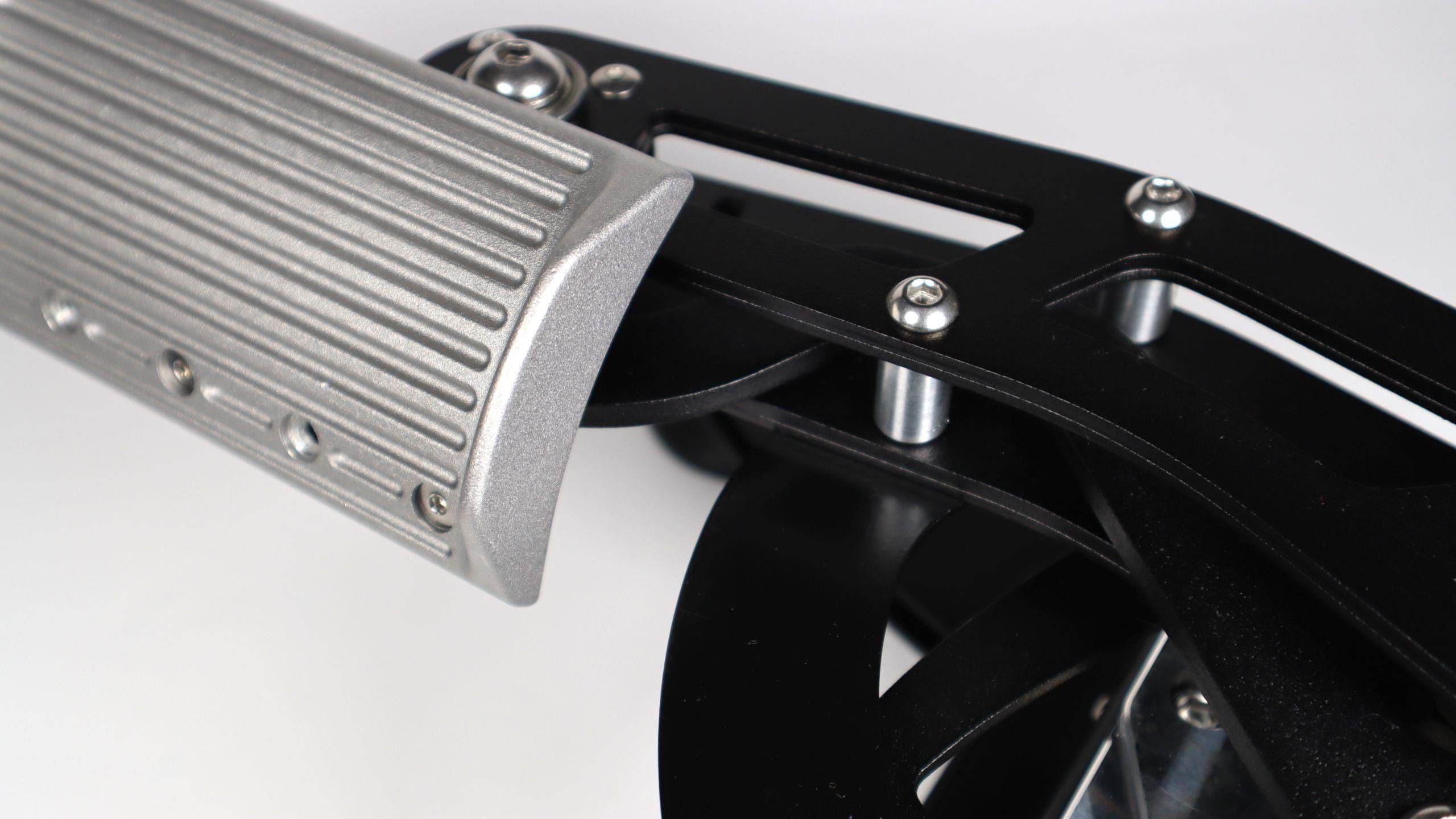 I personally don’t think that’s an issue as I just had to move it a bit so that wasn’t much of an issue. Do make sure you can use it that way before ordering the kit, because you will need to change the position of the plates. It’s not optional. I don’t think that will be a problem for most simmers, though and the benefits vastly surpass the small nuisance. 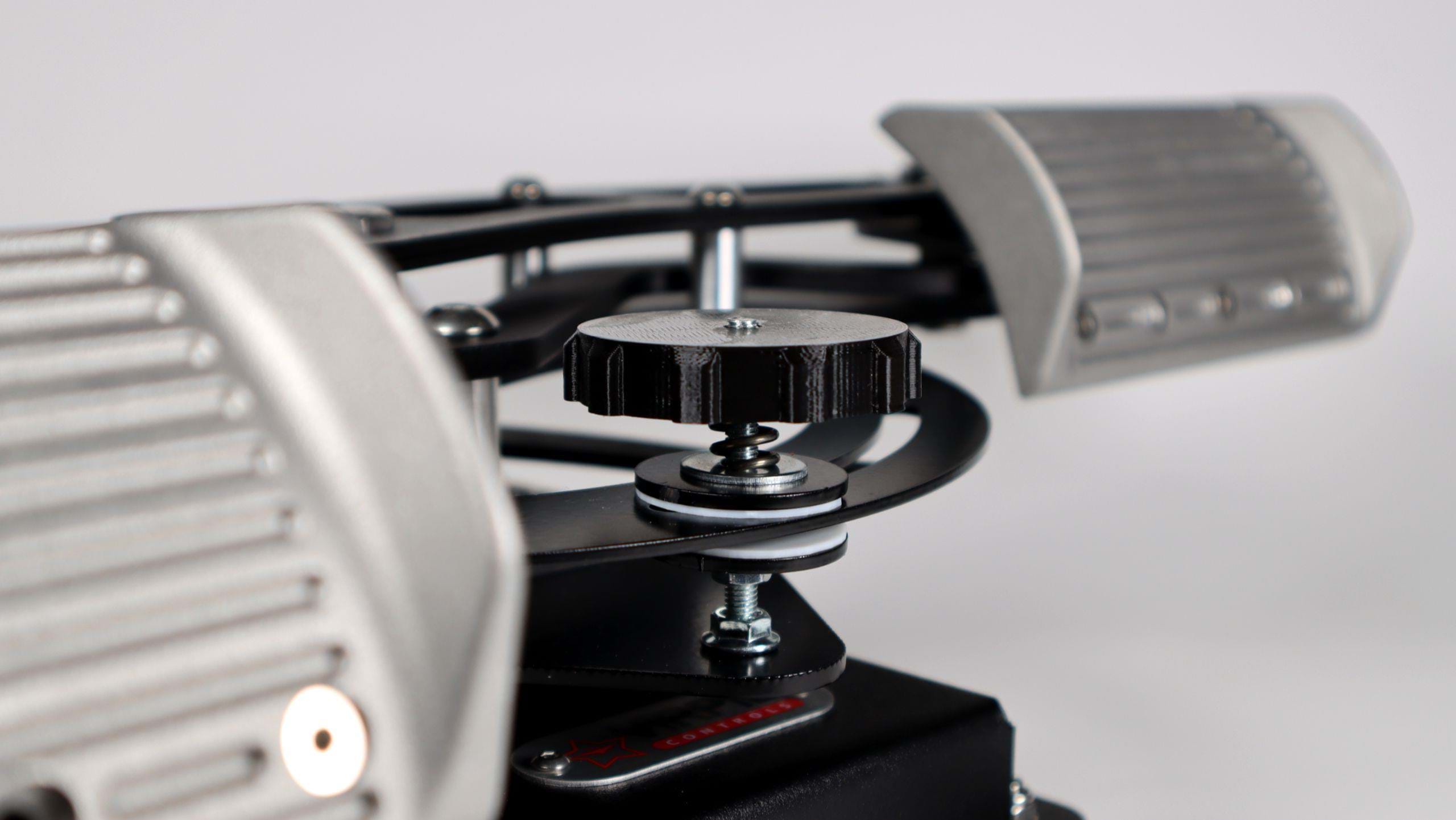 I tweaked the friction a bit as it was a bit too heavy, and I was stunned by the difference. I had the spring removed, of course, and the pedal was no longer loose.

With the damper, I get pressure on my feet, which is great feedback and I actually feel like I have more control over the helicopter.

I also don’t have to compensate with the other foot to prevent the pedal from moving too much, which reduces stress and eventually we get less tired.

I decided to add the spring just to have a feeling of how it would be with it. I am definitely not going to use it, but it was nice being able to relax my legs a bit more to keep the pedal in a certain position. This can certainly be of great value for fixed-wing pilots as well, or for those that only fly rotary but still prefer to have the spring on.

I'm impressed. This kit is crazy.

First of all, it’s crazy because it works so well. I wasn’t expecting to feel so comfortable with it so quickly. I was hoping, I would but I wasn’t really expecting it to work this well.

And it’s crazy because this kit costs 20 Euros + shipping.

You read it right: 20 Euros and it makes a huge difference. At least for me it did, and it improved the VIRPIL pedals even more, especially for helicopters.

At this price point and considering quality of the materials and the different it makes, I have to say this is probably one of the most outrageous little gems I have seen out there, in a good way.

Considering the price and the difference it makes, I have to recommend this to everyone that uses VIRPIL pedals, even if not for helicopters. But I’d say there’s where it definitely shines. It's really a no-brainer.

K-51 doesn’t have a website yet, but you can contact him here . Keep in mind this is a 1-man-show so there’s some waiting time on the orders and sometimes there’s a delay in replying to messages or emails.

Installation 9
Ease of use 10
Performance 10
Build quality 9
Design 10
Total score
9.5
* The above final rating is calculated from a weighted average and not the direct arithmetic average. This means that some elements of the review will have a higher influence in the final score than others.
Click here to purchase/download or more information