Komodo Simulations has been in the market for some time and I have always been very keen in trying their gear. They were at Cosford this year so, obviously I grabbed the chance to give it a try. 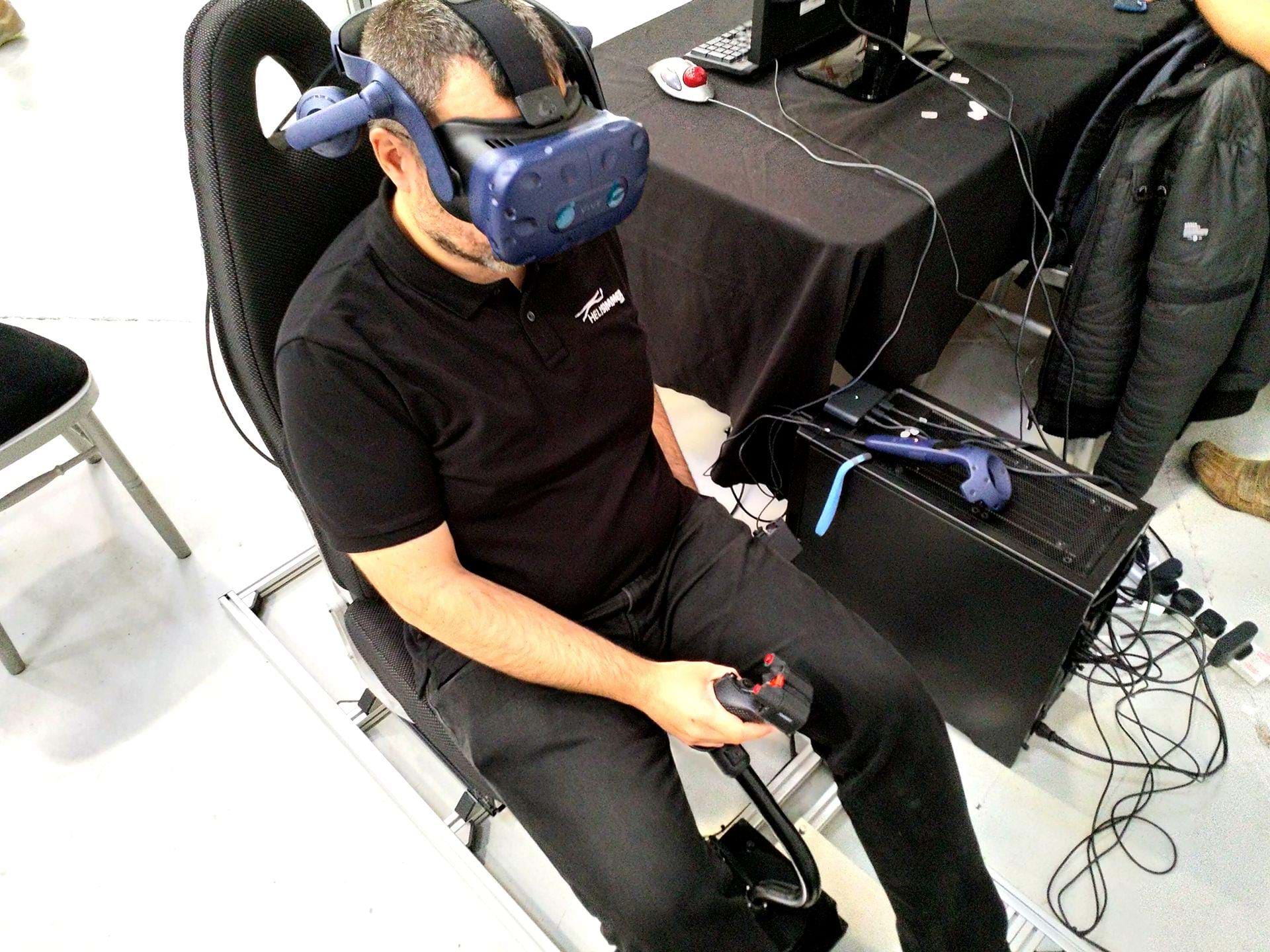 While this is not a proper review – I would have to spend more time, in different conditions and trying a lot of different things – I think the little time I had to give Komodo’s EC-135/145 cyclic and collective as well as Komodo’s more generic pedals gave me a very good feeling for the product.

Before we proceed, a note: I will not do any direct comparisons with the kit I personally use right now (the Pro Flight Trainer Puma). The Puma is a different system from the Komodo products, even though, in the end, both products emulate helicopter controls.

Like I mentioned earlier, I tried the EC-135/145 kit of which you can find the cyclic here and the collective here.

The pedals were the generic Komodo pedals, which are your regular inverted “L” shaped model, with no toe-brakes. 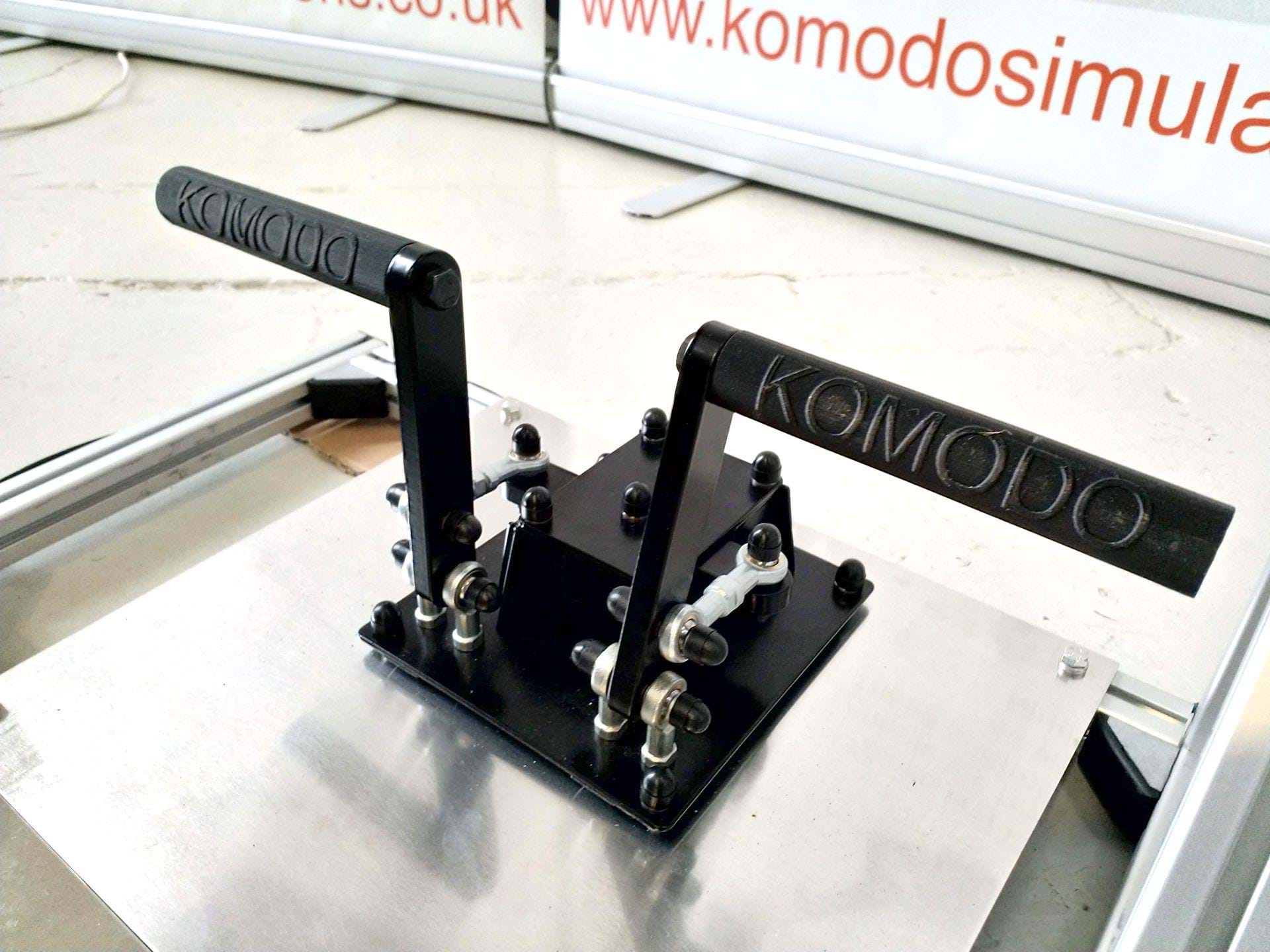 The number of buttons, switches, hats and I don’t know what the heck more the cyclic and collective have is absolutely staggering. I think you could assign a button for each alphabet letter and write a document with that thing (evidently, I am exaggerating, but it IS a lot).

The controls were assembled on an aluminum frame which had a couple of vertical poles where the HTC Vive Pro lighthouses were attached to. There was an amazing seat with real AS350 foam. 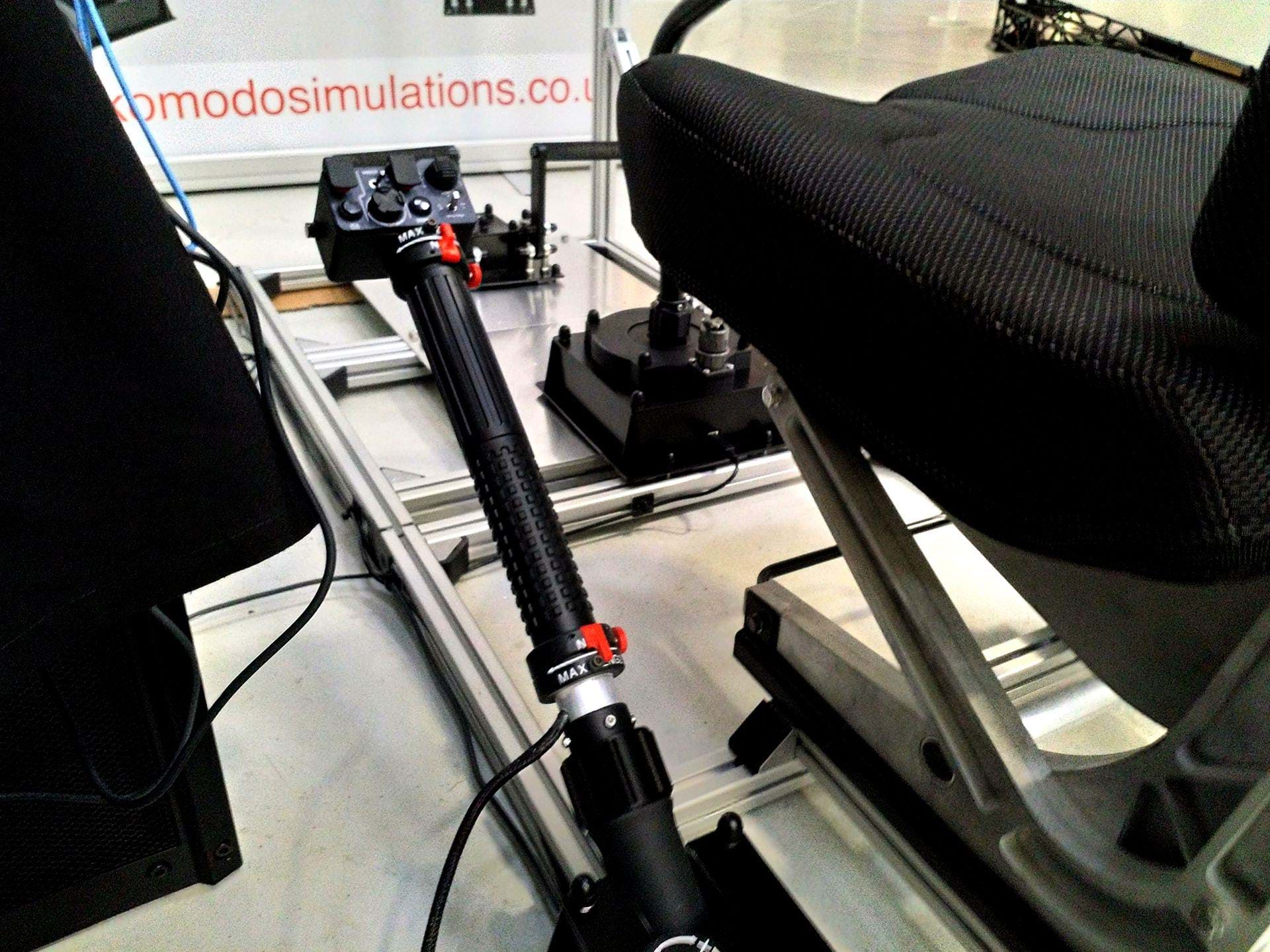 Note to Komodo: you need to start selling that seat. I loved it!

The whole system is quite bulky, and you will need some dedicated space for it but everything you need, except for the computer, is right there. 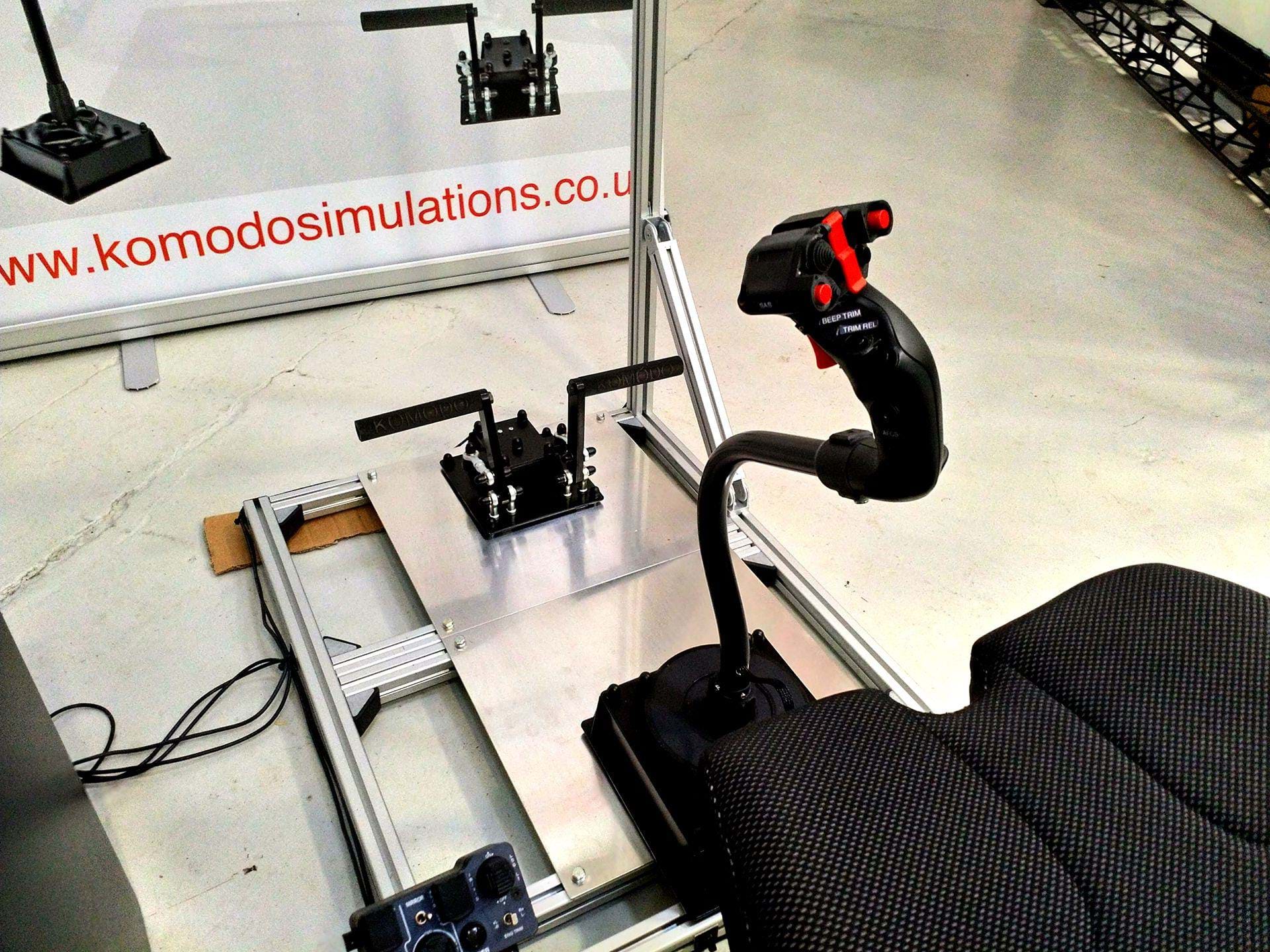 I was very curious to try the controls and so I sat as soon as I could and took the DCS Huey for a spin to start with.

The first thing that hit me was how smooth and low resistance the controls are. Especially the cyclic. I could move it precisely all around and it felt very solid.

The same for the pedals (which seemed a bit too lose for my personal taste, but I got used to it easily). The collective was a bit too stiff but nothing that I couldn’t change by reducing friction.

After taking a minute or two to get used to the overall feeling of the controls, there I was, happily cruising around the Huey and enjoying it as if I was at home – with the notable exception that the Vive Pro was giving me a much clear image and the computer’s performance puts mine to shame.

If you keep your movements smooth and steady, the controls will do their job. I already mentioned that I didn’t have a lot of time to try the controls as we were at an event – and I like to test gear for some time before I commit to rate it or provide a long-term opinion on it – but they worked very well for the duration of my small test and I didn’t see anyone complaining about them throughout the weekend. 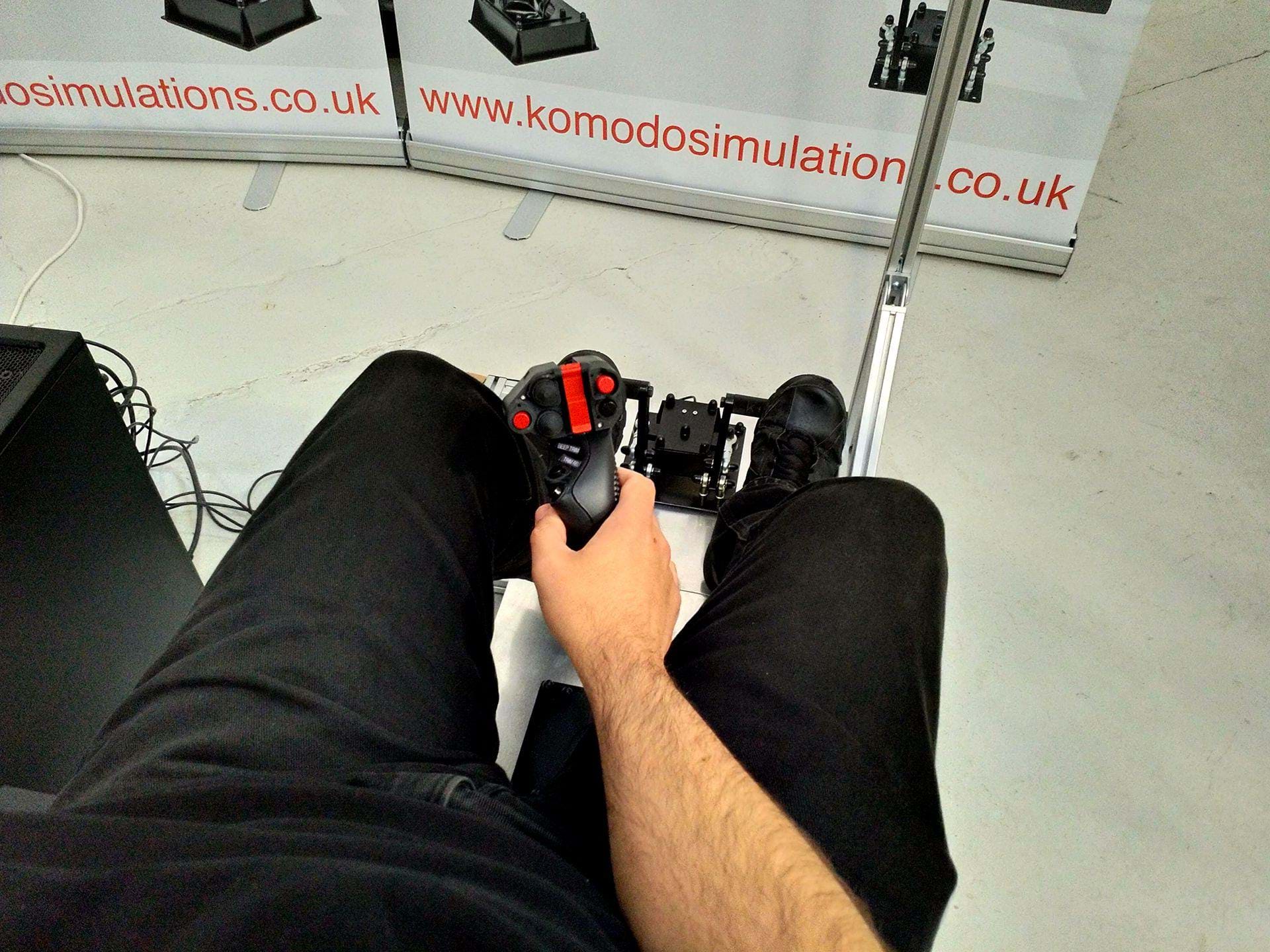 Above everything, the smoothness of the controls, in particular of the cyclic.

I love how we have such a number of switches and buttons. Being a replica of the real deal, it has to do with the fact that the real controls have them as well but the sheer fact that they are there is a joy for those that need to have more controls at their fingertips.

Especially if you use VR.

I loved the seat as well and, although it’s not part of the kit, I must compliment Komodo on that as well. I loved that they took it to the show, even if they are not selling that (at least not right now).

Some details to be improved

I wouldn’t say there were things that I didn’t like. I think that there’s room for improvement just like there is for any other product out there.

I’ve had the chance to talk to the Komodo owner and CEO, Richard Price, about a couple of things I noticed and thought about at the show. Richard took any feedback (from me or anyone else that talked to him about anything) very professionally and has done a lot of follow-up questions, asking about suggestions and providing some initial thoughts on what we were saying. He was clearly already thinking about solving anything we’d be suggesting or asking about.

The first thing that I talked about Richard – which is something I had asked him about before – was the fact that the Komodo controls need to be attached/assembled to something and that this “something” is usually a frame or board that takes a lot of room.

My simming space is the exact same space I work at (I am self-employed so I work at home) which means I can’t have a lot of space occupied by a large frame.

I keep my Pro Flight Trainer Puma unit stowed under my desk, to the side and I manage to get my legs next to it comfortable, but the Puma is a compact design, very different from the Komodo controls.

Having this ability to get stuff out of my way is not just a plus for me. It’s a necessity and it’s something that, for me, helps me decide which kit to get. I suspect this is true for a lot of simmers out there as well.

Richard said he had an idea on how to solve that. I can’t wait to see what he’ll come up with.

The other thing I told Richard about was a bit of a side movement on the cyclic “trigger”. The trigger button seems to work just fine, but you could make it move sideways. He was aware of and it’s already fixed for the newer orders.

Komodo’s gear is not cheap.

With the amount of time and the quality of the materials use, it couldn’t be. Not to mention the time spent in R&D (which is something people never remember and that takes a huge toll on the final bill). Also, these are assembled, manually, in the UK where labor cost is higher. Not to say that if they where assembled in other countries the cost would reduce by a lot. There would be some cost reduction, but I am afraid that quality could suffer as well.

And, of course, the fact that the number of units sold is so small that building those at a larger, industrial scale, where prices drop considerably, is impossible, doesn’t help either.

We are a niche inside a niche. A small market of very passionate folks. But still a small market, and that has its consequences.

In the end, I have to say I loved the controls. Again, and I must reinforce this, I did not spend enough time with the controls to do a proper evaluation and review.

The controls feel great. The overall feeling is quite similar to the Puma, which I own for a couple of years now (or a bit over that). There are things I like more about the Puma and there are things I like a little more about the Komodo. The feeling on the cyclic, for example, is something I like better on the Komodo cyclic, but the system is very different from the Puma. The Komodo has 4 dampers whereas the Puma uses a regular gimbal with friction. So, yes, the difference is notable.

If you ask me if I recommend the controls, yes. I do recommend them. Even if I only have used it for a bit of time.

I’ve met a couple of Komodo users on the spot and I have talked to someone else that uses them as well and they say the kit they have (one of them for over a year) feels pretty much the same as the brand new one Richard brought to Cosford.

I can’t wait to see what Komodo’s solution for storing their controls will be. I think that if they solve that, a lot of new and former customers will be very happy.

Learn more about Komodo Simulations at the official website.