Vortex Ring State: what is it, how to prevent it and how to get out of it

Apr 05, 2017 | by Sérgio Costa
Tutorials, Hazards and emergencies
One of the most dangerous situations a helicopter pilot can get into is called Vortex Ring State. Learn what it is, how to prevent and how to get out of it.

Vortex Ring State (also known as VRS or "settling with power") is one of those things that we really don’t think about it until someone points it out to us. I remember the first time I read about it a few years ago, and I thought “oh yeah, that makes sense”.

A few helicopters have been lost because of it and, if you are not careful enough, it can bite you really hard and bring you down. It’s that nasty.

Anatomy of the Vortex Ring State

In a pretty basic, easy form of explaining it, Vortex Ring State happens when you fly through your rotors’ downwash (faster than it, actually) and, because of that, you lose lift.

Rotor blades are essentially wings and they require good, clean (as in undisturbed) air to be able to generate lift and keep your helicopter flying. The movement of the blades causes the air to move, generates vortices and disturbances, which don’t make it for a healthy environment to create more lift. 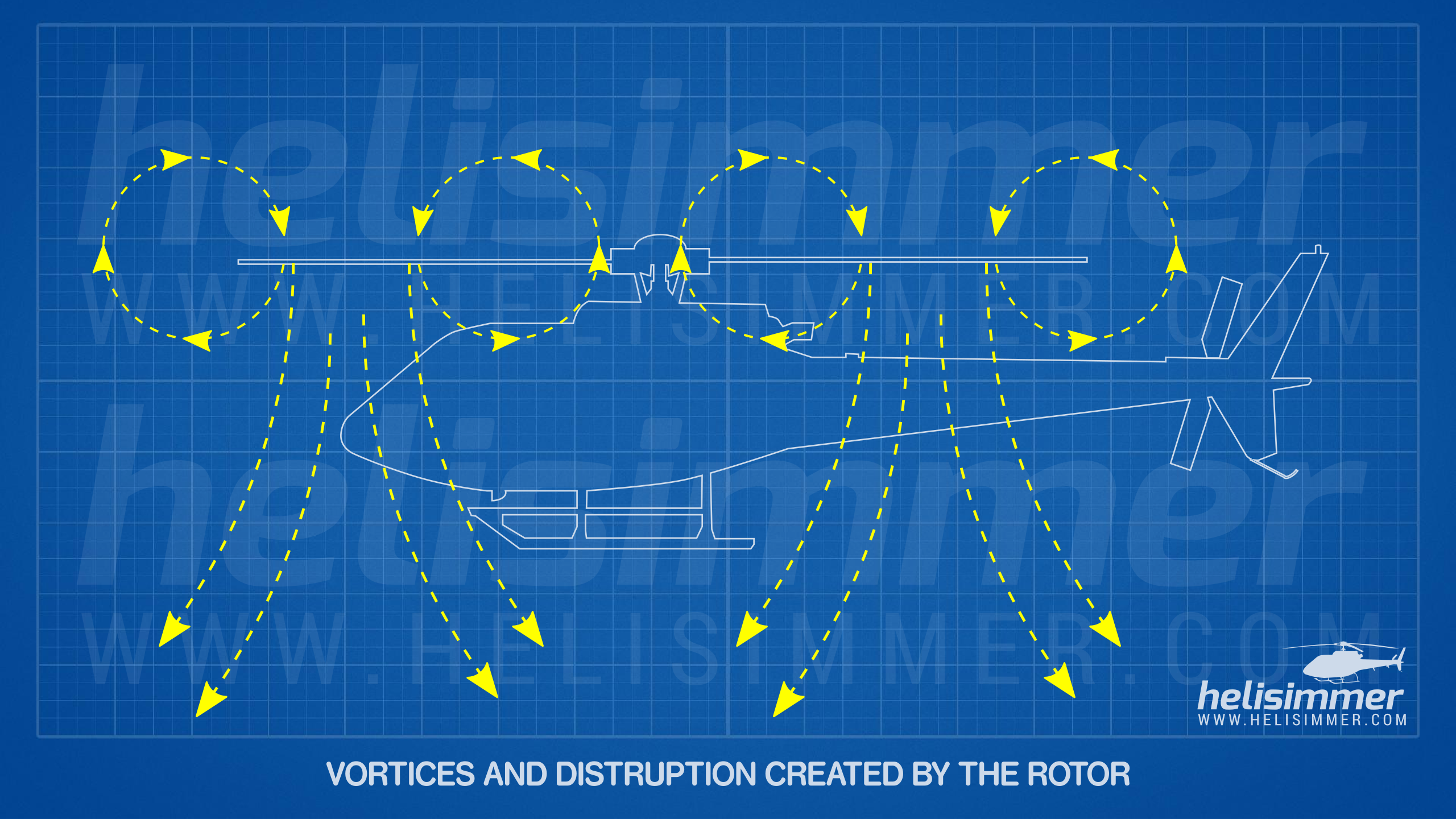 As you move forward, you are leaving that disturbed air behind you. If you are hovering, you are pushing that air below you but your blades can still pick up “fresh air” that’s above and around them.

If you start descending too fast while staying on the same place (horizontally speaking), you might get into serious trouble. 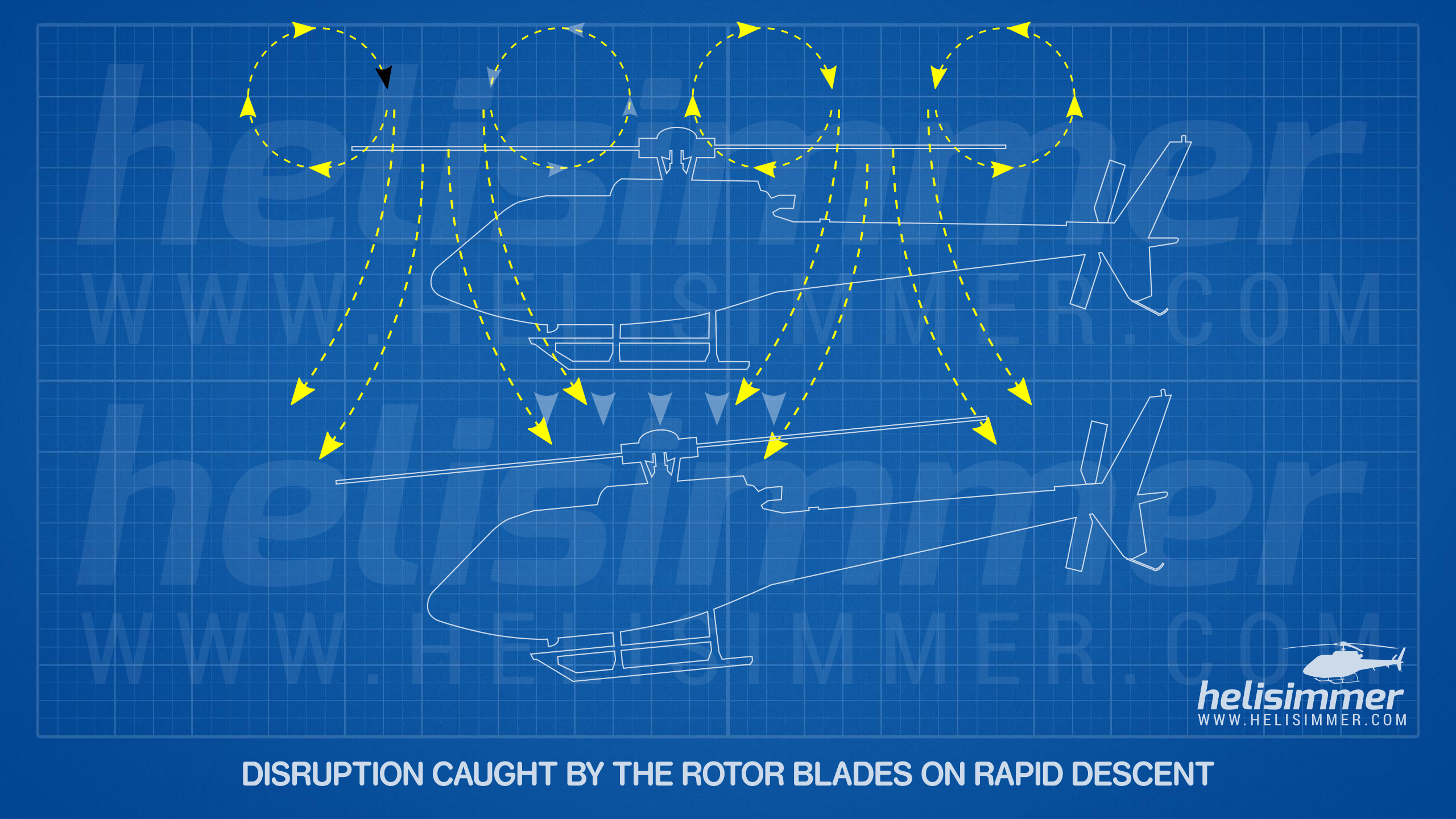 You see, by doing that, you’ll start descending faster than your own downwash (the air coming down from your rotor). You’ll start to pick up all the disturbed air and vortices that will make it hard – or even impossible – for your rotor blades to generate the lift your helicopter needs to stay in the air.

So, descending too fast while not moving horizontally can help you get into VRS. But how fast do you need to be moving in any given direction? You should be moving at above your transitional lift speed. That's the safe speed.

There's also another factor you should consider: power. You see, vertical and horizontal speed are not the only culprits here. You will also need to have power applied (hence the expression "setting with power"). If you are descending with 20% power or more, at a high rate of descend and low horizontal speed, you'll be all set up for chaos.

If you don't have these factors into consideration, you will lose lift and you will fall from the sky.

But you can both prevent and fix it.

How to prevent VRS

First of all, if you understood what causes VRS, you can easily avoid it: avoid 100% vertical descends (with no lateral/front/backwards speed).

It’s always a good idea to descend with some sort of horizontal motion (if possible, going forward) as to try and get away from your downwash, all the disturbed air, so you can still feed your rotor blades with nice, solid, clean air for all that precious lift we need.

While doing so, you’ll still want to keep an eye on your vertical speed. Anything below 800 feet per minute is a good vertical speed. If possible, keep it at 500 or less, to make it safe.

If you do need to descend vertically (as to land on a tight spot, for example) do keep your vertical speed under control and under 500 feet per minute. Some say that 300 would be the ideal but that depends on the helicopter you are flying. It does sound like a good rule of thumb, though.

In the sim, I try my best to keep my vertical speed under 500 when moving slowly (and, even so, I’ve had my share of surprises – especially in DCS).

So, in a nutshell: keep your vertical speed low. If you are moving vertically only, keep it super-low. And expect stuff to go wrong fast if you happen to get distracted.

But that’s part of the fun, right?

How to come out of a VRS state

Coming out of VRS is not hard – if you have the altitude to do so.

In a way, VRS is a lot like stalling a fixed wing. First of all, you can get out of it you have enough altitude. Secondly, you’ll need to do something that will go against your instinct.

When you stall a fixed wing, the tendency for a new pilot is to pull the stick as to raise the nose and gain altitude. We all now that will get you killed. What you should do is pull the nose down to get some speed and, hopefully, get past the stall speed, get some air flowing on those wings and survive.

In a helicopter, once you enter VRS, you will start falling from the sky. What do we do when we lose altitude on an aircraft? We pull the collective up, right?

In this case: wrong. Very much wrong.

You see, pulling the collective up will hurt you a lot more than will do you any good. By doing so, you are increasing the blade’s angles and, as such, you are disturbing more and more air and reducing your chances for your blades to start providing any lift. In a lot of cases, you will actually start falling faster!

If you enter VRS, the first thing you’ll need to do is to lower your collective, all the way down. Then you’ll want to get out of that cylinder I talked about previously. You’ll do that by moving your cyclic in any direction. For obvious reasons, we usually do it forward. If you have an obstacle in front of you, you’ll want to move sideways. Honestly, it doesn’t matter in which direction you move as long as you get out of the disturbed air and you don’t hit anything while trying to do it. 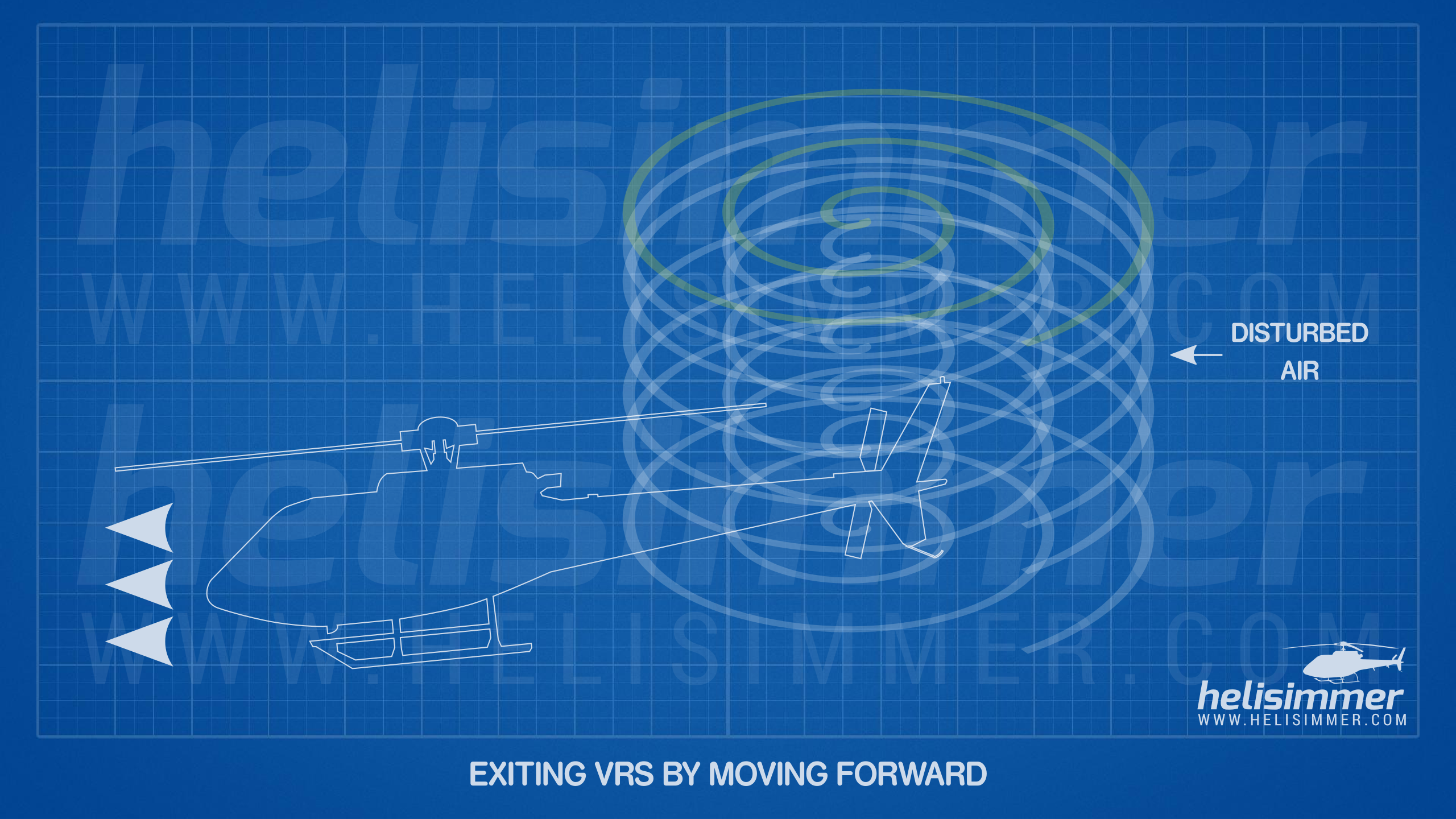 Once you leave the disturbed air and you feel your helicopter is falling less, do add some collective and get out of that situation.

Again, you can imagine that you can only do this if you have enough altitude. If this happens and you are too low, the chances of you biting the dust are quite high.

Practicing these skills in a simulator is safe and fun. Do try to get into VRS and moving out. Learning to do so will be as important as learning how to prevent it. You’ll never know when things go bad and you’ll need to get out of a sticky situation.

Vortex Ring State is not present on most simulators out there. FSX and Prepar3D surely don’t implement it. Some developers have been able to somewhat mimic it to some extent but not very realistically.

At the time this article was written, X-Plane does have some sort of VRS but it’s not correct as you can get out of it by pulling the collective up (something we’ve seen above that we should avoid at all costs). It's the most similar to what happens in reality except for that fact.

DCS and FlightGear also have it correctly modeled with a high degree of success, although they are also not perfect. On FlightGear, though, it will depend on the quality of the aircraft you are flying.

I’d like to thank Joe Hudson for all the help and support while writing this article as well as the video.