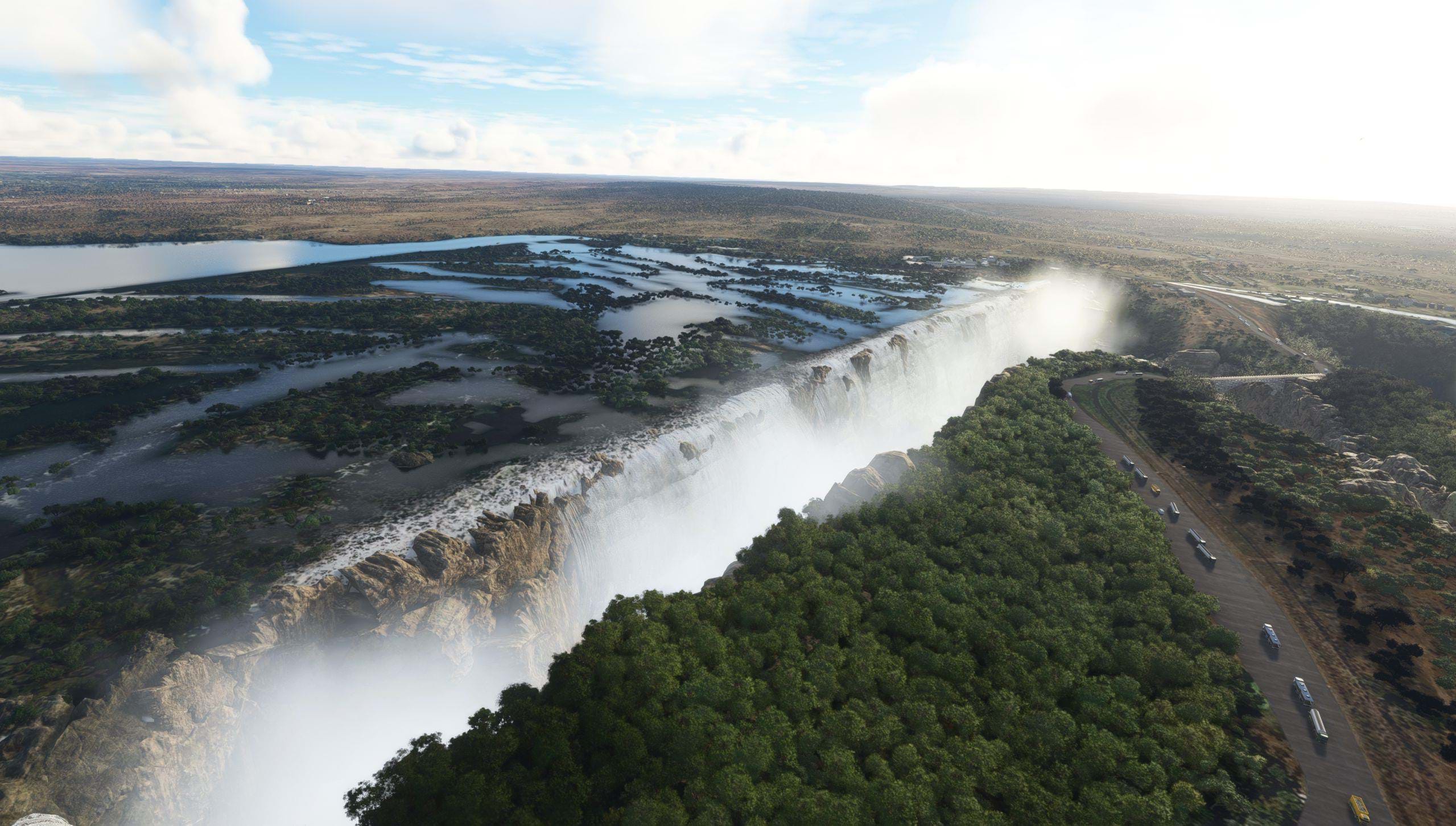 I’m a sucker for African scenery. I don’t know why, I just am. Perhaps it’s the vast planes with nothing but desert and (mostly) unobstructed views.

Or it’s perhaps the sense of isolation that makes us understand how helicopters are definitely in their environment, connecting remote regions and acting as a lifeline.

Either way, I am a sucker for African scenery. 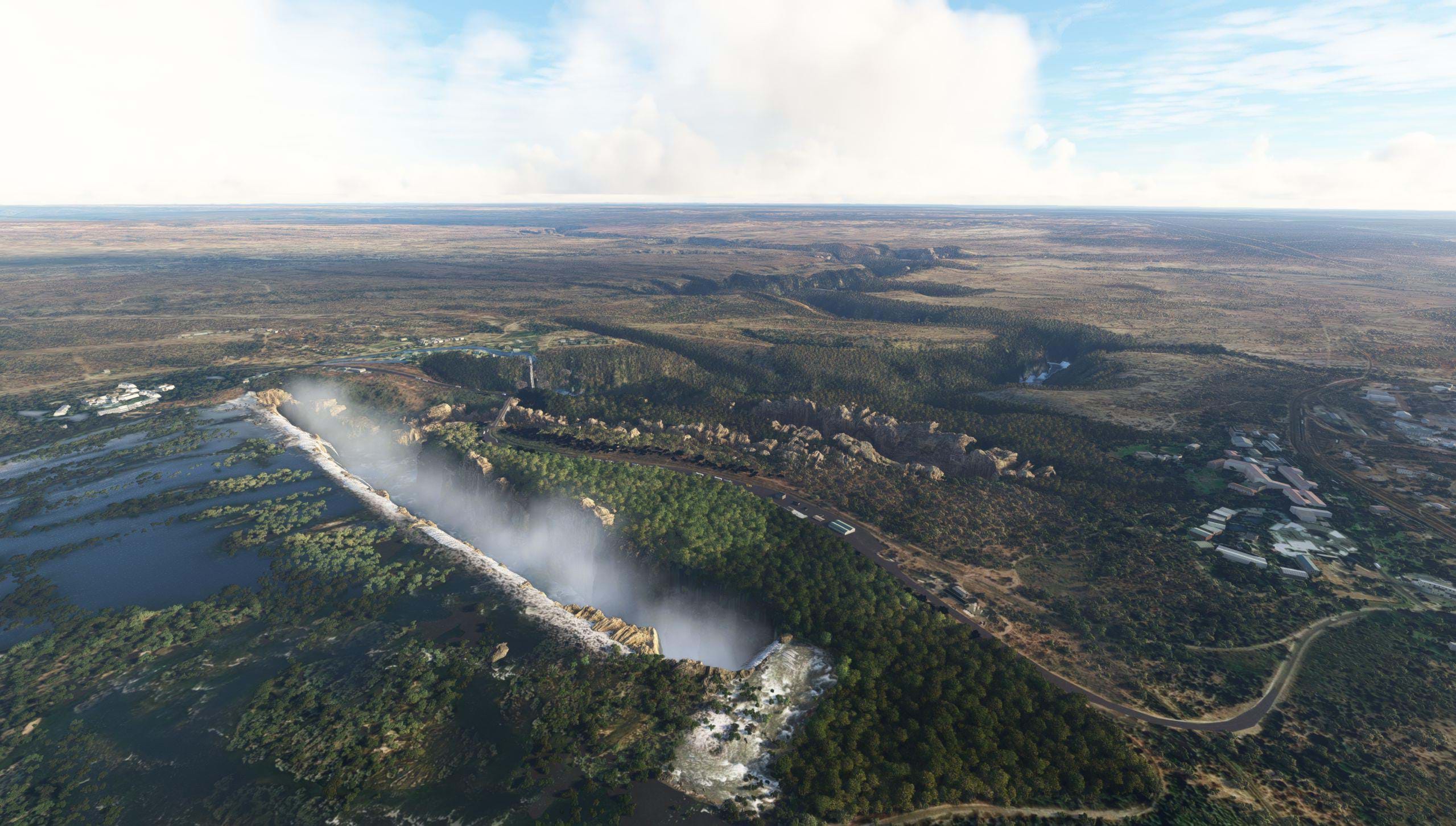 When Jeppeson2001 sent me an email about his work, Victoria Falls Scenery Pack, he definitely got my attention. MSFS does a great job at depicting these regions but there’s always something lacking if you don’t put some manual work into it. Well, it’s pretty much like that anywhere, to be honest.

I was particularly interested to check out the falls. And I’m sure a lot of you are as well.

Victoria Falls and the Zambezi River

Victoria Falls is part of the Zambezi River, the 4th longest river in Africa, and a big portion of the border between Zimbabwe and Zambia. It actually crosses 6 countries: Zambia, Angola, Namibia, Botswana, Zimbabwe, and Mozambique. Yep, that’s big all right. 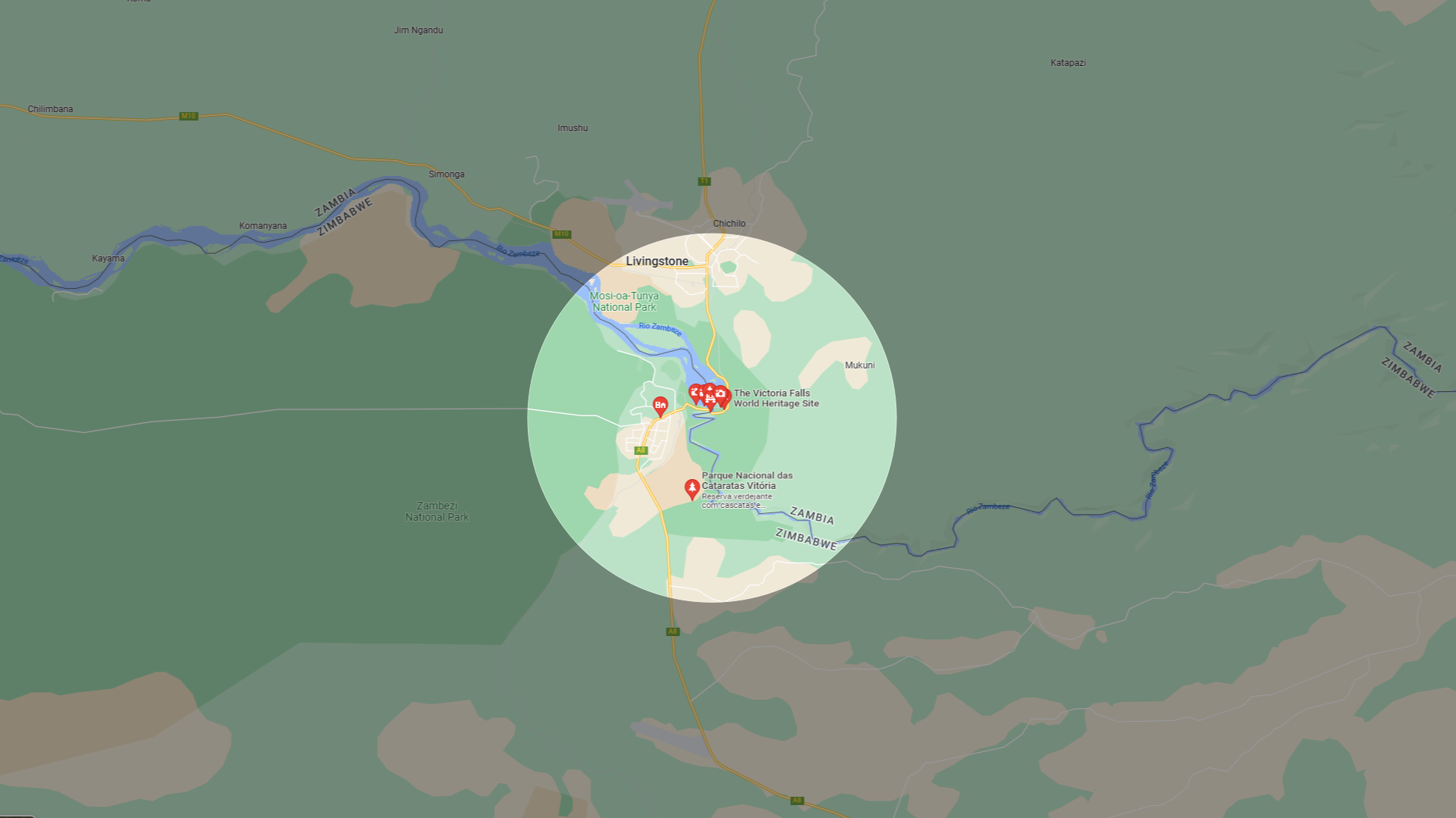 I have to address the waterfalls right away. I’ve always loved those images taken from the air of huge waterfalls, with lots of mist that make it both impressive and scary. And that’s not something we have in Microsoft Flight Simulator right now. Not even Niagara Falls, after the US and Canada updates. Disappointing!

Jeppeson2001 has our back, though. Victoria Falls are exactly like that and there is a lot of mist in the air, making it absolutely stunning. I remember when I first saw the screenshots and the video before the release, and it seemed breathtaking.

Then I saw it in the sim. And, trust me, the video doesn’t make it any justice. Especially if you fly using VR. Which you should, by the way.

Jeppeson2001’s Victoria Falls are gorgeous and command a lot of respect. I was obviously very curious to see them close. REALLY close. But I was actually, genuinely anxious when I started flying toward it. Which is kind of odd. After all, this is just a sim, right?

Nonetheless, between the amazing scenery in general, VR, and the very convincing mist around the falls, my brain was fooled enough to believe I was getting myself in trouble.

Let’s start with the beginning. Installation is not hard, but it can be tricky for some. Unfortunately, for a few users out there, the ‘community’ folder is a bit elusive as people didn’t pay that much attention when installing the sim and setting the location of this folder. To make things worse, it seems that it gets placed in a very obscure place for some users and it seems there are 2 community folders, so you’ll have to know which is the right one.

This is not, of course, the developer’s fault. After all, installing the scenery is really just a matter of copying the scenery folder and pasting it into the MSFS ‘community’ folder.

But this may still be an issue for some users. While not a huge fan of installers for addons, I think it could be a way for users to get their products in the right place faster.

So, while I do not fault developers – like Jeppeson2001 – for the MSFS clunkiness in this area, I can’t really say installation will be easy for everyone. No, it’s not complex, yes, most people will be able to install it in the right place but there may be exceptions.

To be honest, experience says exceptions will always exist but it’s good when developers manage to try and make it an easier experience.

Again, this is nothing against Jeppeson2001 or his scenery. I had no issues installing it since I know exactly where my ‘community’ folder is. 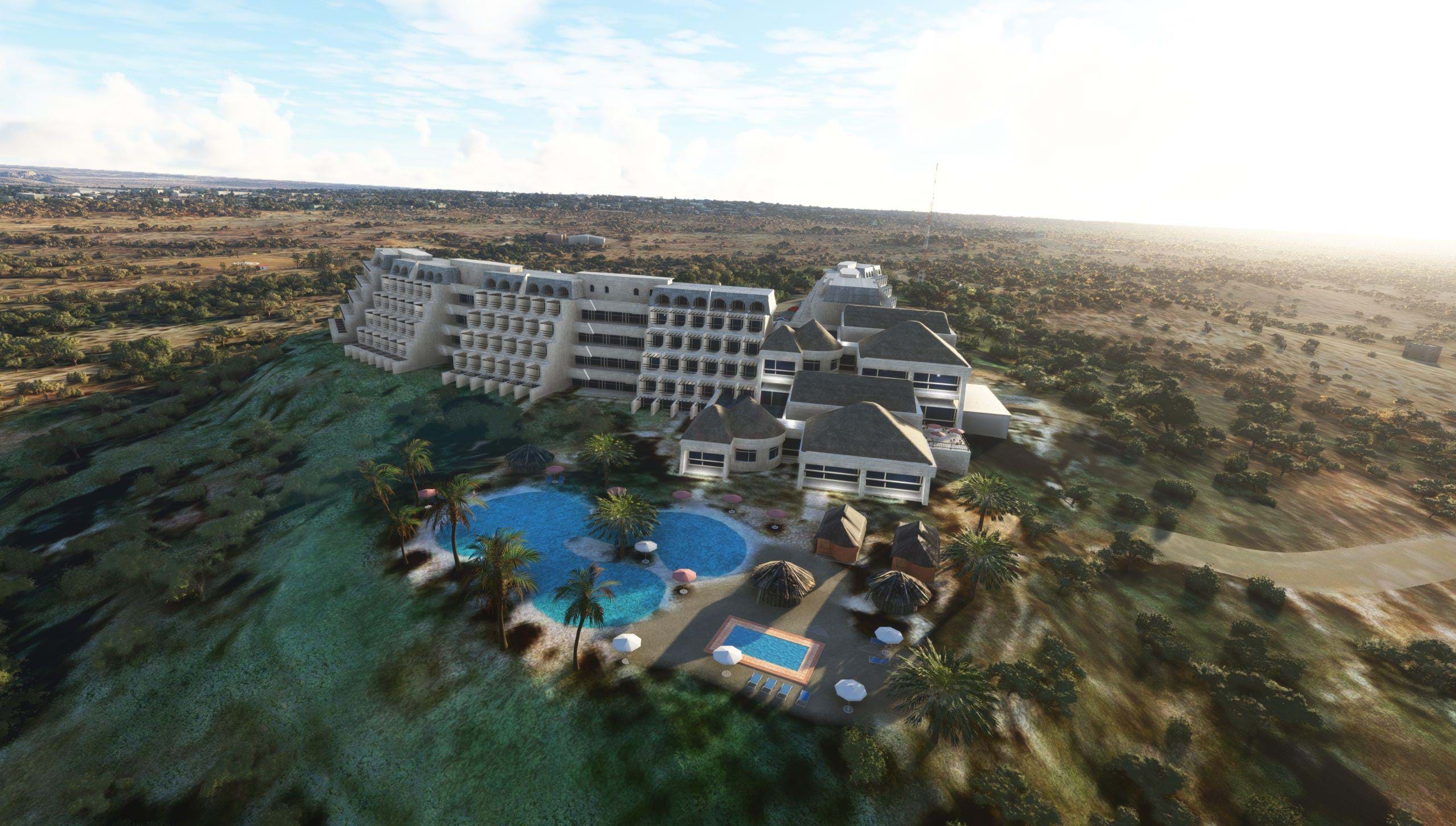 This beautiful area has quite a few resorts around it as well as some heliports and helipads scattered around. Companies offer lots of activities, which include helicopter rides. This means there are a few airfields and/or heliports such as Elephant Hills Heliport, placed right next to the Elephant Hills Hotel, for example. But there are other landable pads scattered around, some of them quite interesting and challenging. 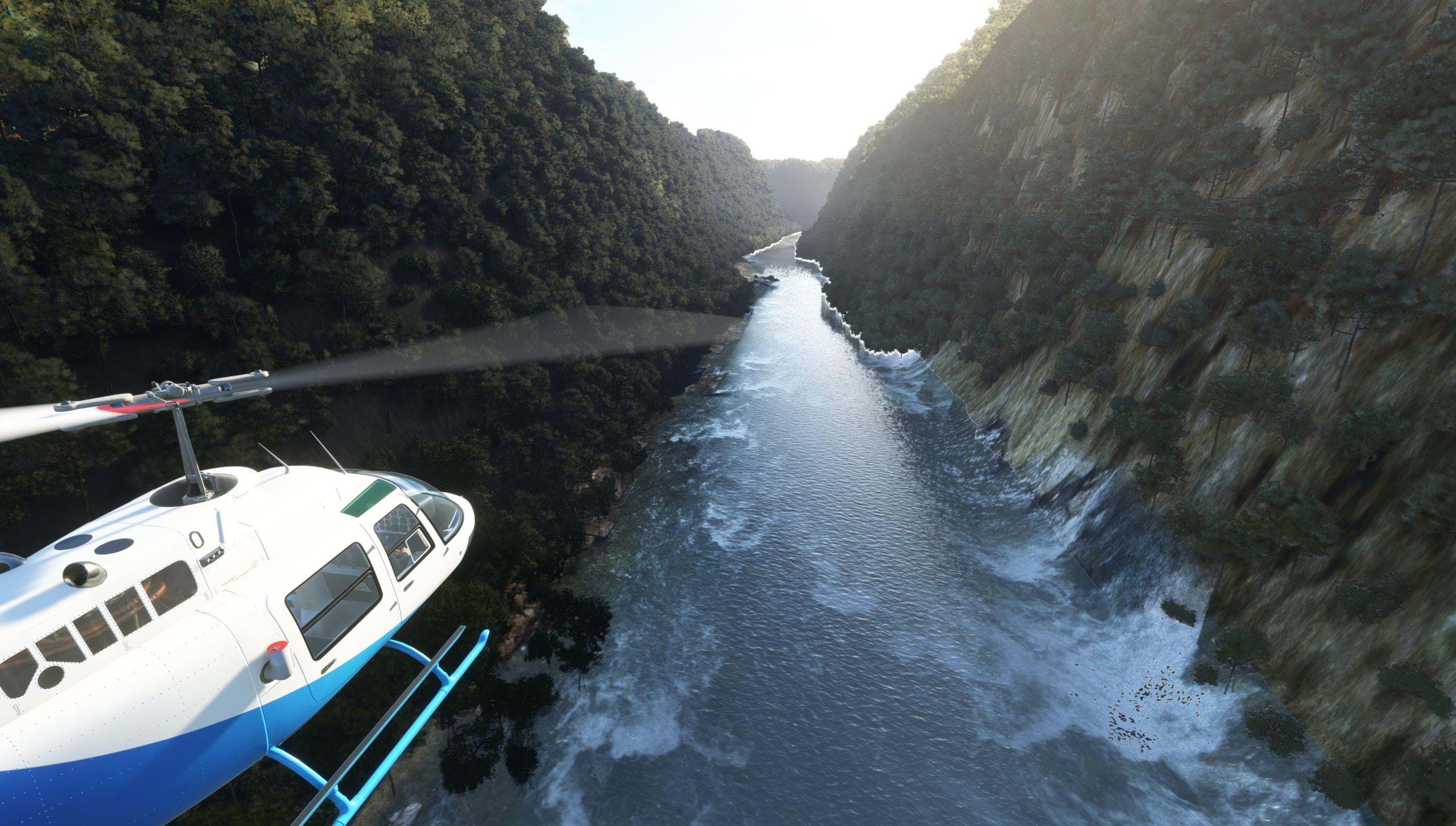 Right after the falls, the river carved some deep valleys. A real sight – and a fun place to fly right above the water while trying not to become a smear in the valley walls. Not recommended in real life, I would say, but a blast in the sim.

The river also has some rapids, and it seems tourists love going through them. This presents itself as another flying opportunity since there are some helipads in the margins of the river to provide assistance to the rafters, transport them to and from the locations, etc. 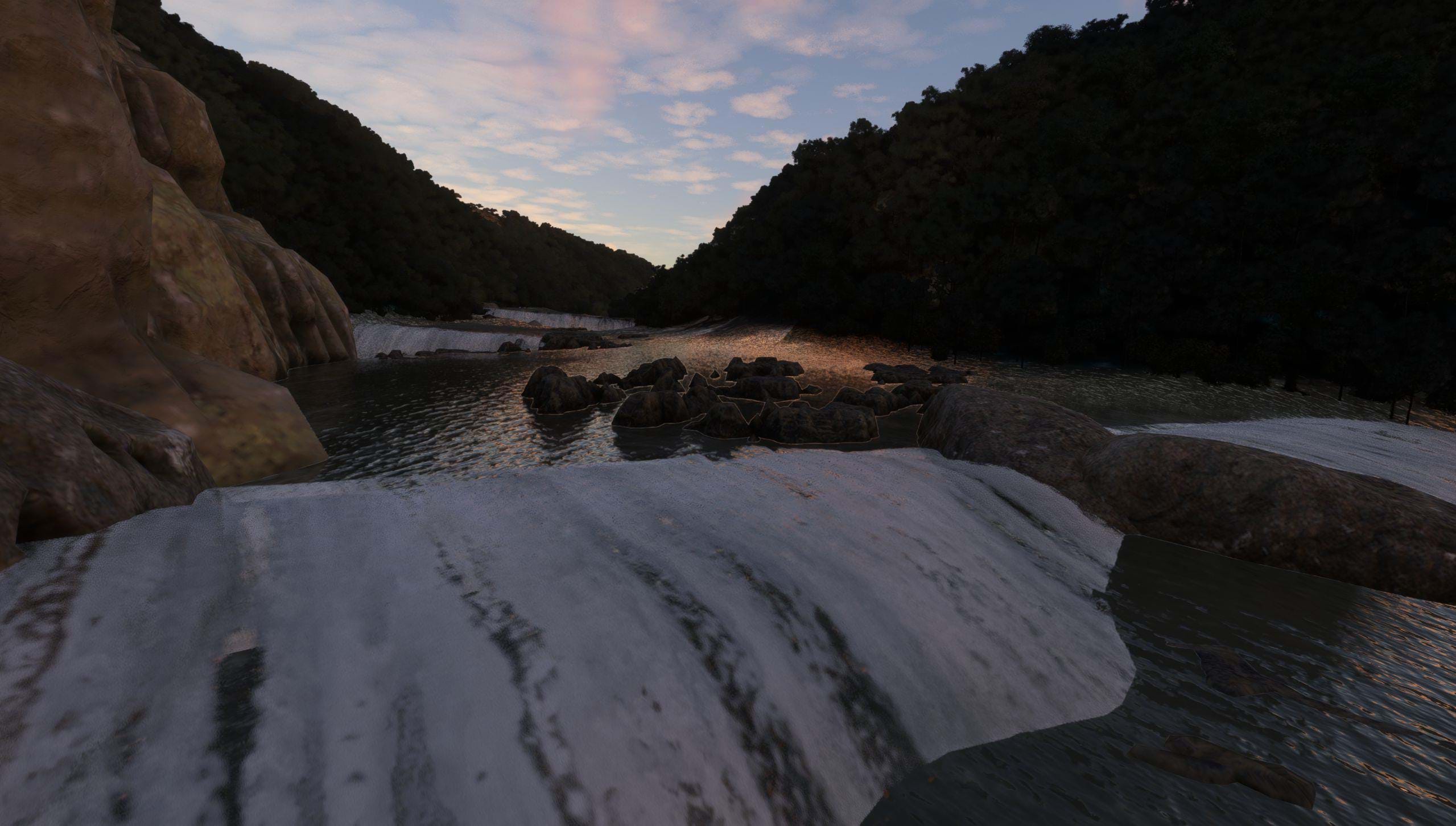 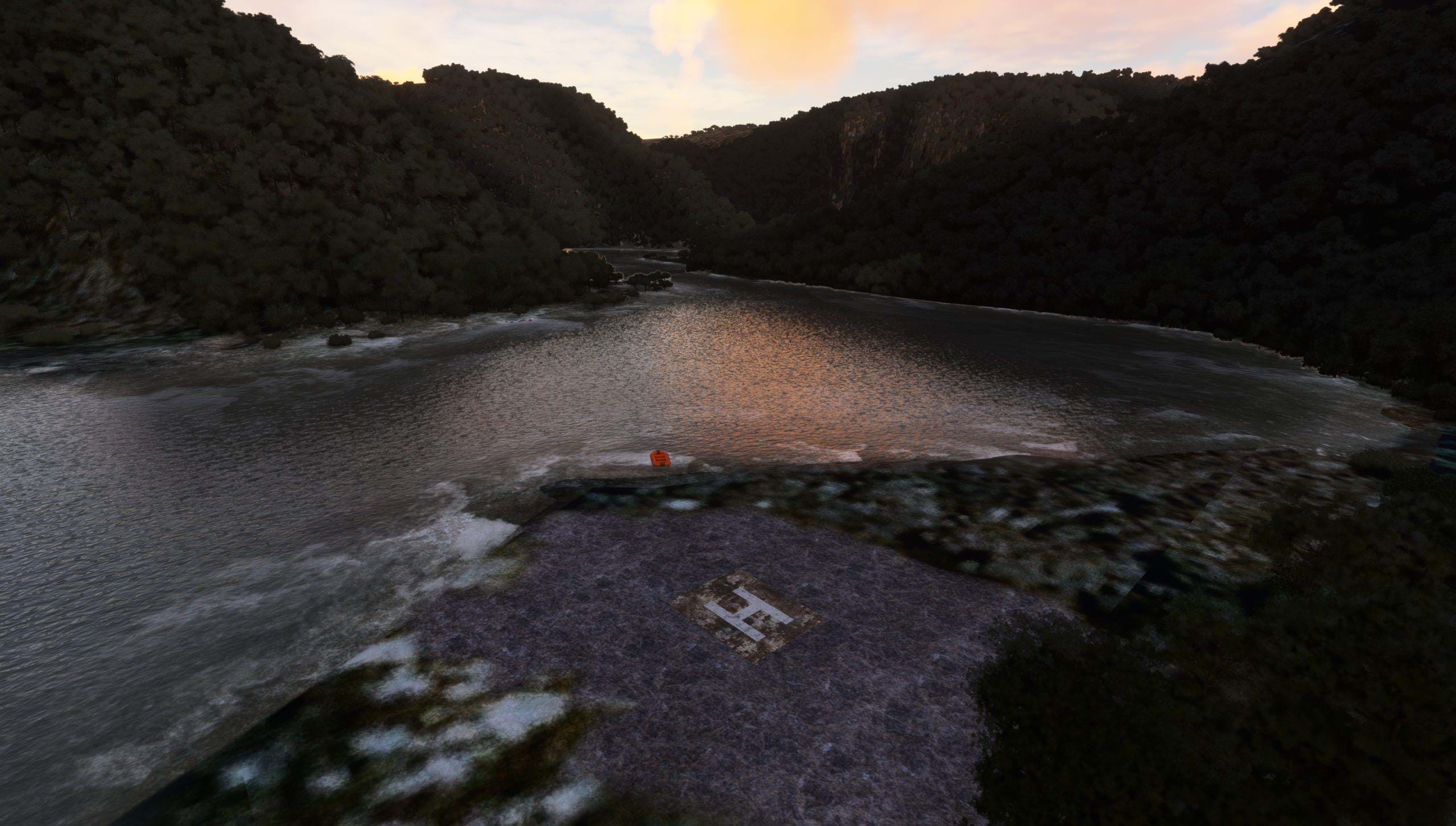 Oh, and you may see some activity in the river as well as there’s, at least, one small vessel cruising around. Nice touch. 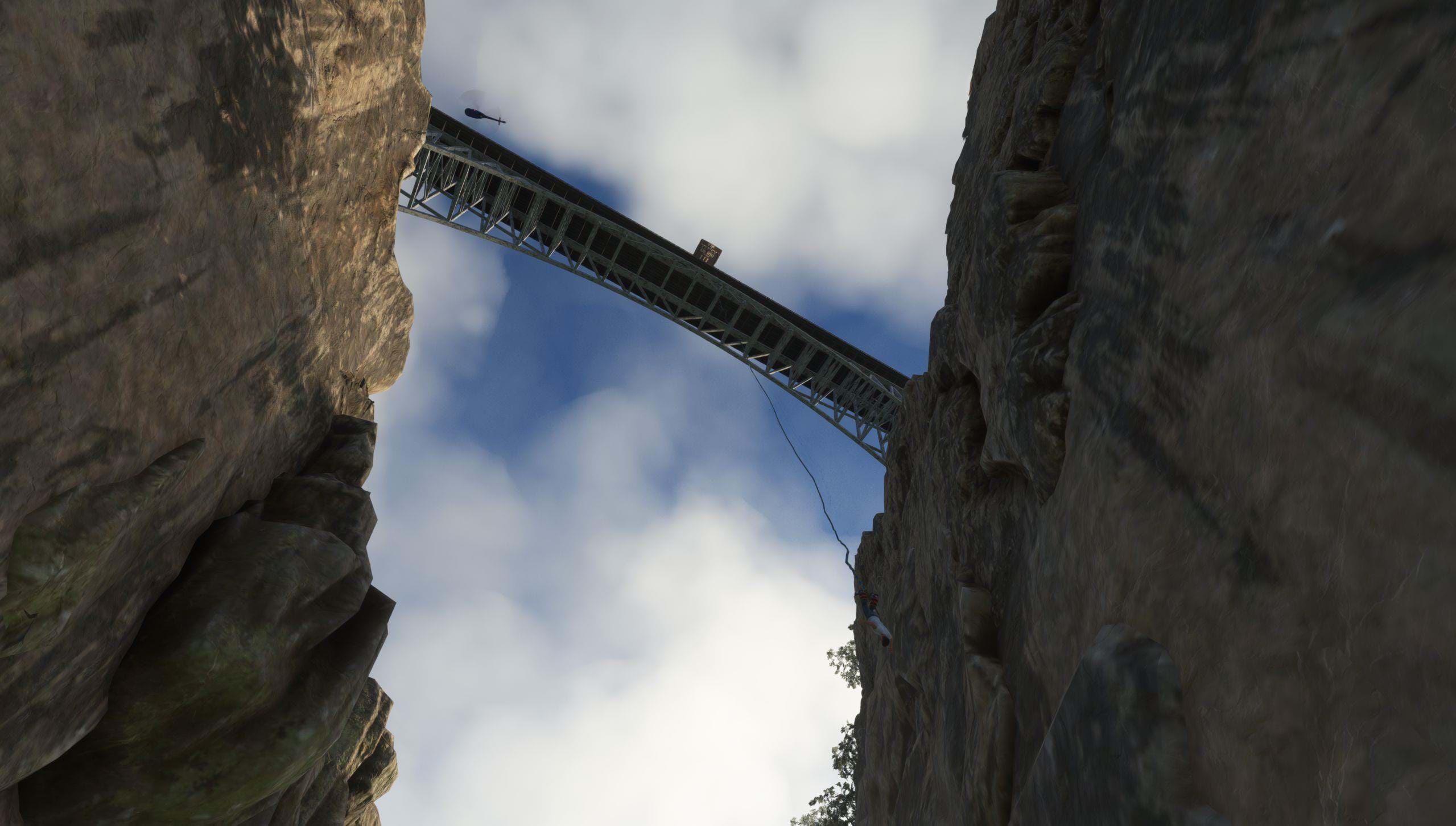 Right after the bridge, when the aforementioned valley begins, you’ll find the Victoria Falls bridge. It’s a modern metallic structure where vehicles can cross the gap and apparently folks like to jump from. 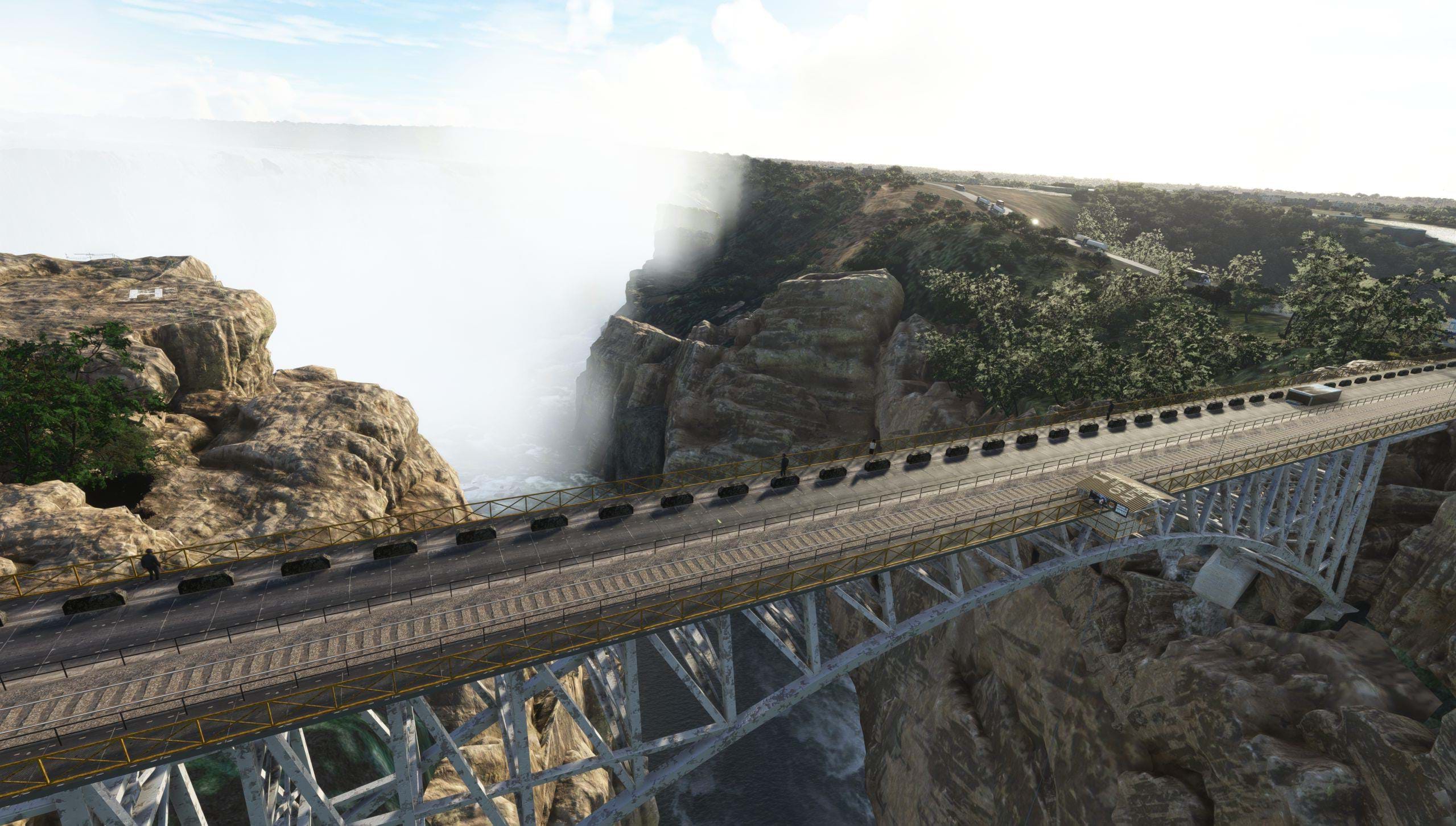 With a bungee attached, of course. And Jeppeson2001 added that as well so you can see a bungee jumper have fun at the location. Just make sure you time it well if you plan on flying under the bridge! 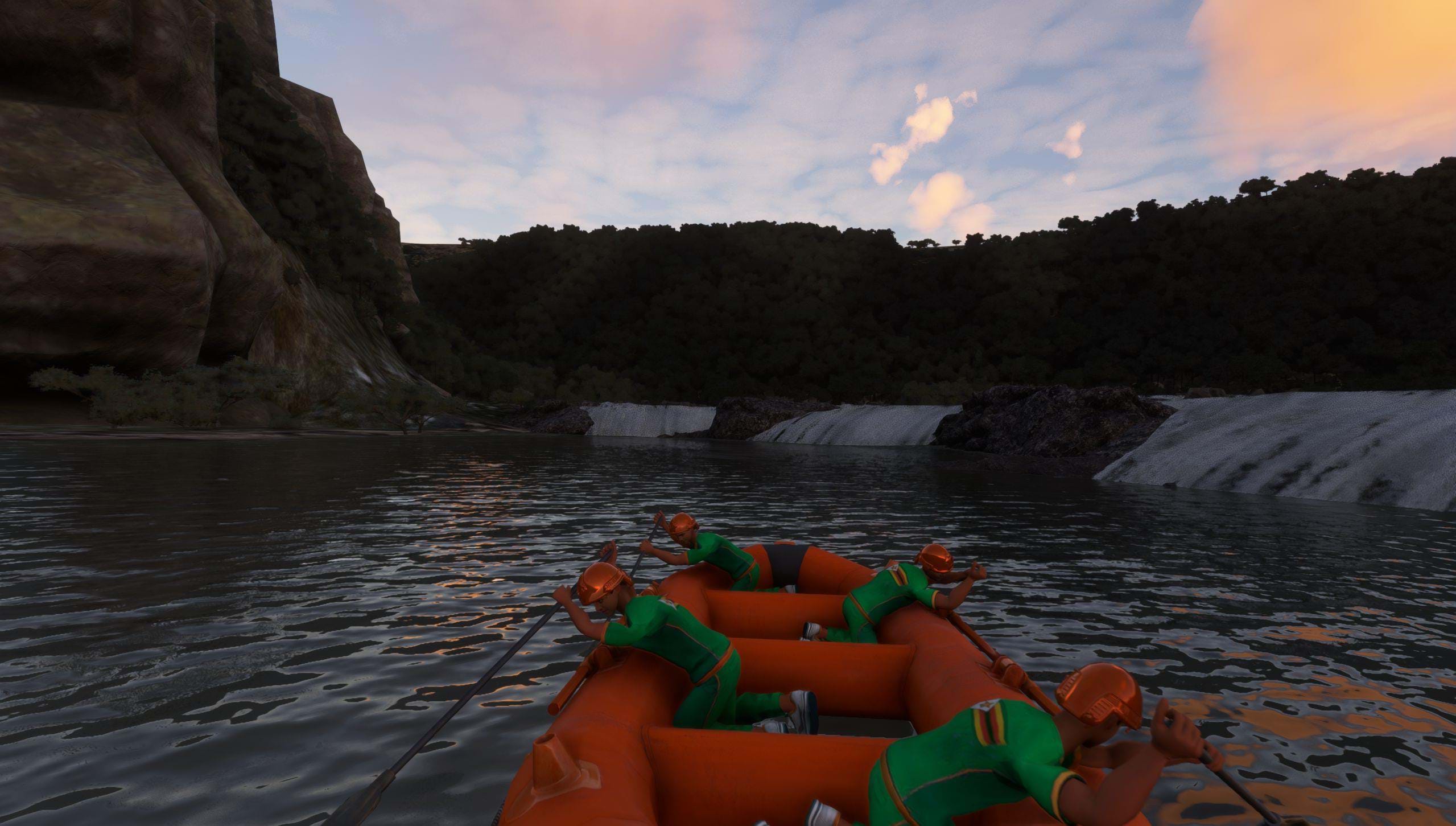 The bungee jumper and the raft are not the only animated little details. At one of the airfields, you will be able to see a hangar with animated doors. Once the doors open, an R44 will be brought out, stay there for a while and then go back in. 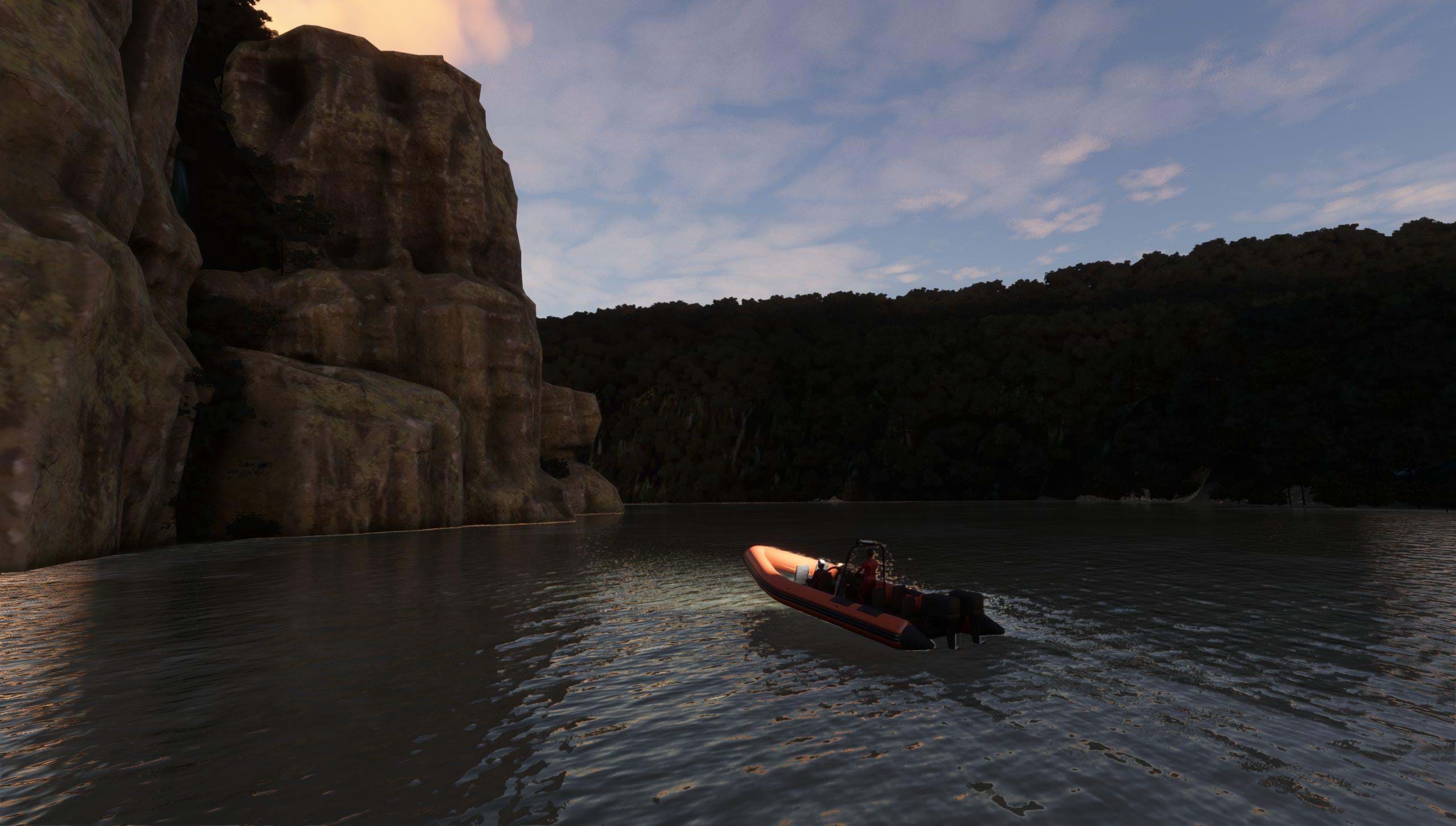 You can also see some animals moving around the area and beware of traffic since there’s an ultralight flying near the falls.

All this adds to the immersion and makes the scenery much more alive and dynamic.

There’s lots to do here, really! You can transport passengers to and from the hotel, bring rafters to several locations, do some air safari runs, follow the river and show it to tourists, perform some cargo transportation, carry nature conservation teams… The possibilities are endless.

Or you can just fly around and enjoy the scenery! 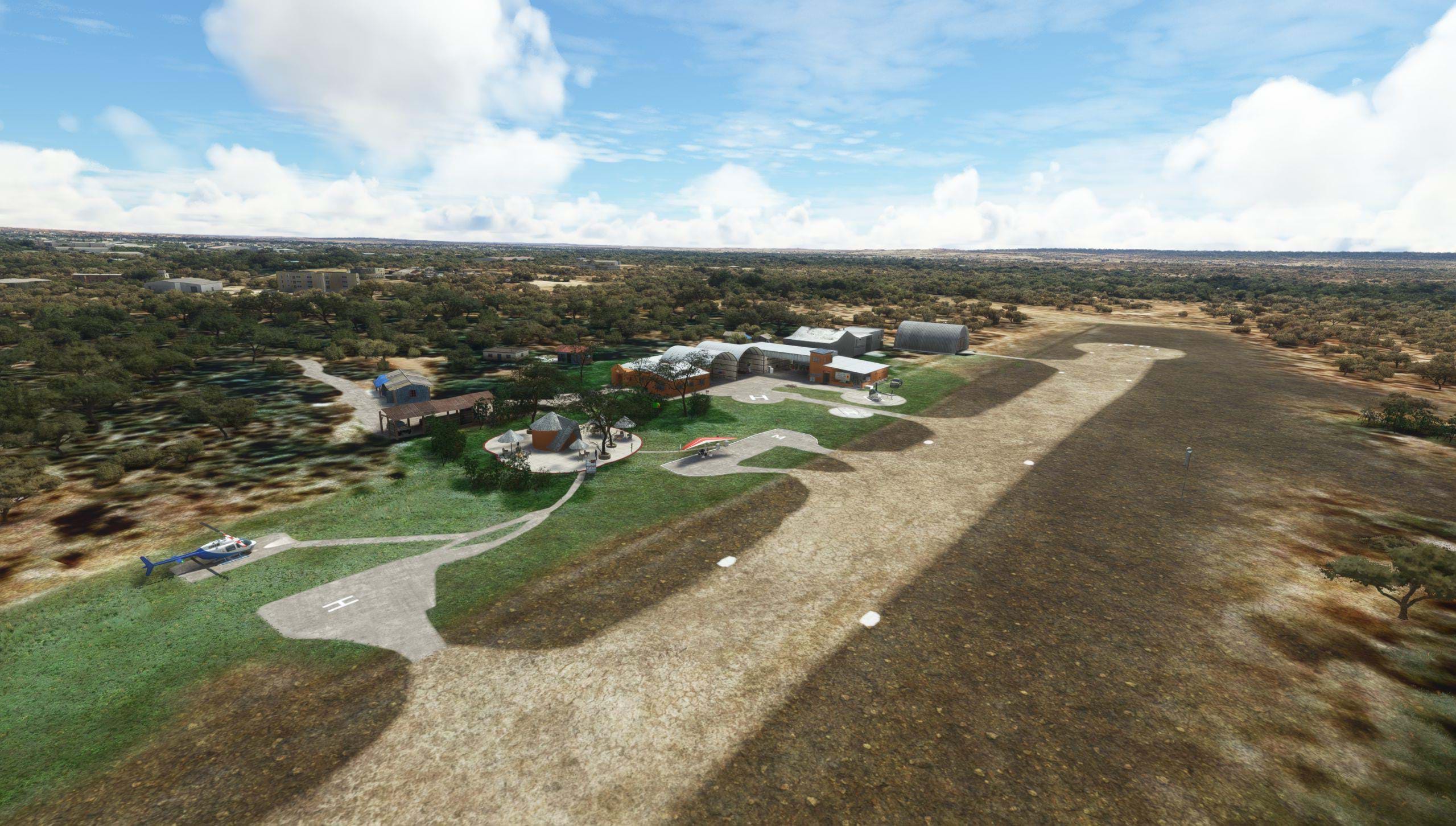 All right, we have to address this.

The gorgeous waterfall with all the mist?

That can ruin your framerate.

I can fly around the area in VR with decent performance (please don’t ask me about the framerate numbers – I honestly don’t know and don’t care; as long as it’s fluid, I’m good).

Even around the waterfalls, the framerate was decent, but I noticed a drop. It was visible that the computer was struggling a bit more even with my i9 and RTX 3080. It wasn’t enough to render MSFS useless, but I noticed something was going on.

Especially when I dove into the falls, but I don’t expect you to do that – unless you’re really curious like I was.

In general, the scenery is not framerate heavy and I believe most won’t have any issues if they have a decent graphics card but perhaps folks with a 1080 or lower-end 20xx or similar cards may have to start tweaking their settings a bit. I’m just speculating here since I tried this with a 3080 as I said. 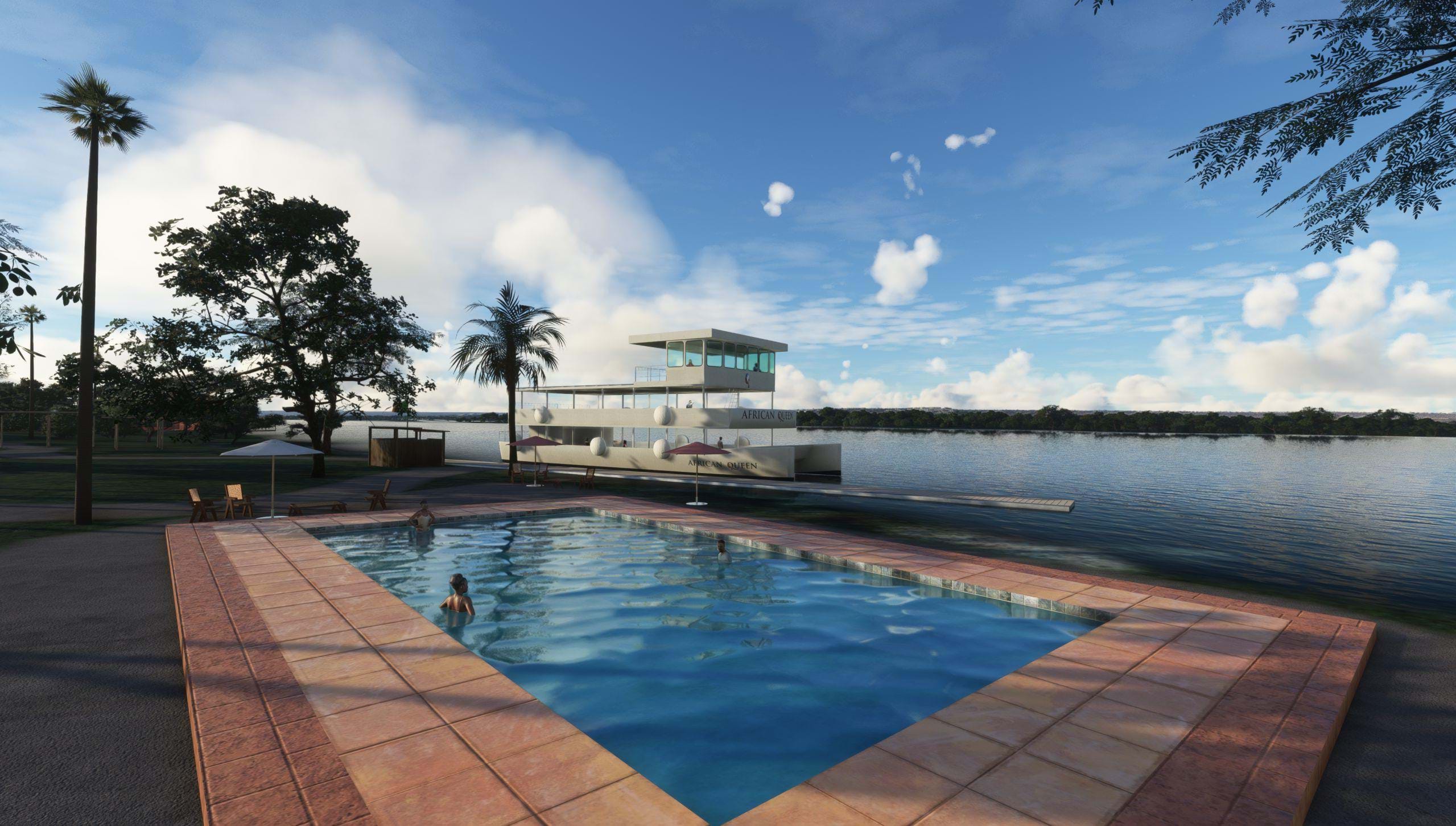 I can’t think of any reason not to get this scenery. Quite the opposite.

Unless you are not a fan of big, wild nature areas, I can’t think of a reason not to get this scenery. At about 17 Euros (or the equivalent in your currency) you are getting what’s probably the most impressive waterfall in MSFS right now, at a gorgeous location with lots of nice things to do.

Installation 9
Textures 10
Model 10
Visual impact and quality 10
Frame rate impact 8
Total score
9
* The above final rating is calculated from a weighted average and not the direct arithmetic average. This means that some elements of the review will have a higher influence in the final score than others.
Click here to purchase/download or more information