Mar 06, 2018 | by Jeff Tucker
Hardware
Review, Hardware, Thrustmaster, Warthog, Rainman Simulations
The Thrustmaster Warthog is one of the most sought-out joysticks in the market and there are very few simmers out there that haven't heard of this product. But good products can become better and Rainman Simulators helped it out with the Warthog adaptor kit. 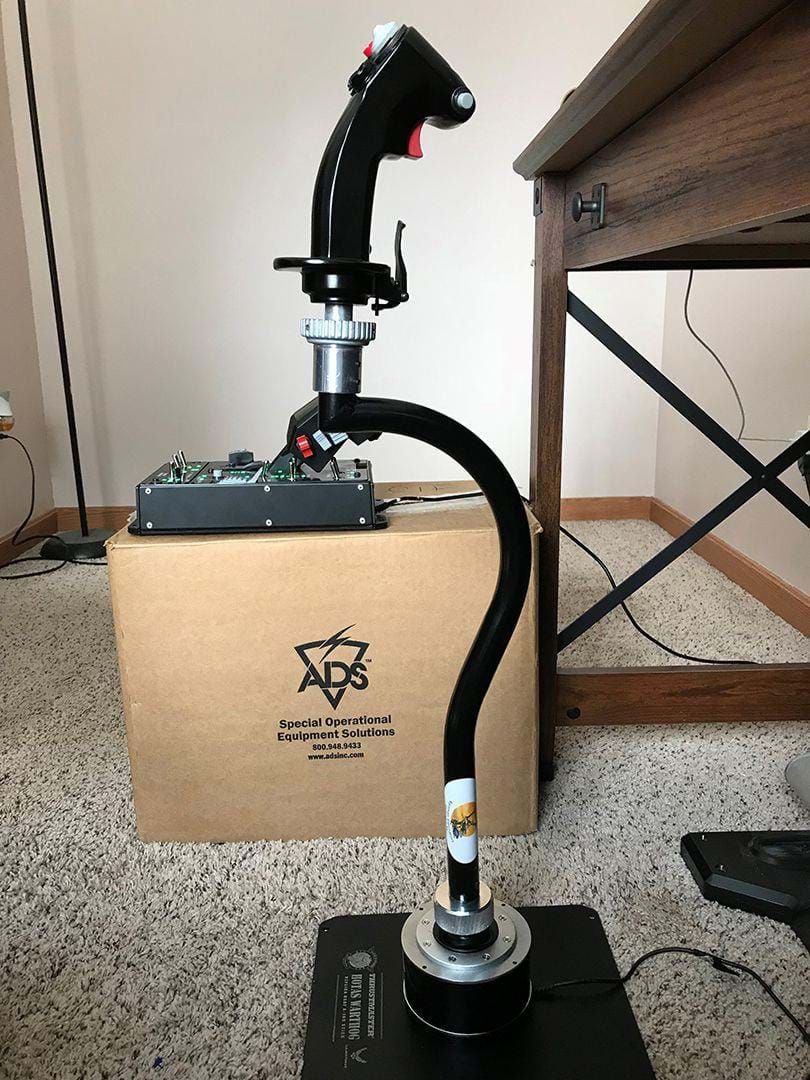 Like most hobby/enthusiast flight simulator pilots, I enjoy this hobby on a budget. Surprise expenses, family issues and any number of other situations may pop up that requires me to delay my next, planned, upgrade to my simulation equipment.

Yet, every once in awhile we bite the bullet and drop that big chunk of change on that item or that product we’ve been drooling over, and our simulation experience gets that much better.

A large following of simulation enthusiasts would argue that, as far as control peripherals go, Thrustmaster has been a constant in the game and as technology evolved, so did the quality of their products. Yet, while they have been the standard bearer for some time in the market of affordable, accessible controls, slowly new companies are edging into the market and bringing consumers better and better product – that’s not a bad thing for us, the consumers.

As with most people, as soon as the Warthog became available, I anxiously chipped away toward my simulator fund waiting until I could purchase one. But when I did purchase one, I was both pleased and a bit disappointed.

Most companies producing flight simulator controls must stick with a baseline constant. And while some delve into specifics (yokes for example), usually those are only “easily suitable” for a certain type of aircraft.

Sadly, as helicopter pilots, we’ve had few companies that have really descended from the stratosphere on pricing (big hint to you – companies) while also tailoring components for helicopter flight. It’s getting better every day, but we still have some ways to go.

Most of the bone-stock controllers come equipped with heavy centering springs, 30 billion lights and wrapped up in a plastic pipe and cheap- feeling controller. It’s only recently manufactures have been listening to us and starting to make solid product.

But even those solid products come with some inherent flaws which many of us live with. The Warthog was a good step in the right direction for its time. Not only was it solid metal (which, not a majority of common aircraft have metal control heads, but they also have more money to replace them) and high-quality gimbal with a setup simple enough most of us could modify.

As an example, the first thing I did was pop that giant Warthog centering spring out, move the four smaller springs above the clutch plate and then cruise around fat, dumb and happy; at first. After a few hundred hours flying with the stick this way, I started to notice the wear this was having on the components.

My springs were getting soft and creating more and more noticeable “detents” which was making flying more difficult. Also, I was feeling less fine-tuned movement near the center. I needed to fix this.

This is where Mark from Rainman Simulators comes into play. I had been browsing options for some time looking for either a replacement or a modification that I could perform at home that wouldn’t require me breaking out a soldering iron, power tools and a welding torch. My requirements were simple:

Now, to be upfront, Komodo Simulations is the next step for me. There is a lot of very promising work expected to be out Komodo’s shop very soon that is tailor made for helicopters and priced for the average joe.

But, for now, I needed something that I didn’t have to mess around with too much. I had contacted Mark once before and asked a few questions but, in the end, decided to keep looking. Then I got word a few weeks back that he was having a sale of his custom built, wired and easy-installing 24.5mm Warthog Extension kits.

I couldn’t pass up the offer. I hit the “Buy Now” button, shipped off a $175 US Dollars and waited.

The product shipped quickly from Australia and right to my mailbox. Mark was communicable and friendly the entire time. I was concerned seeing a bubble-wrapped bundle in my mailbox but, some-what excited as well. I pulled it open and was very pleased at what was inside. 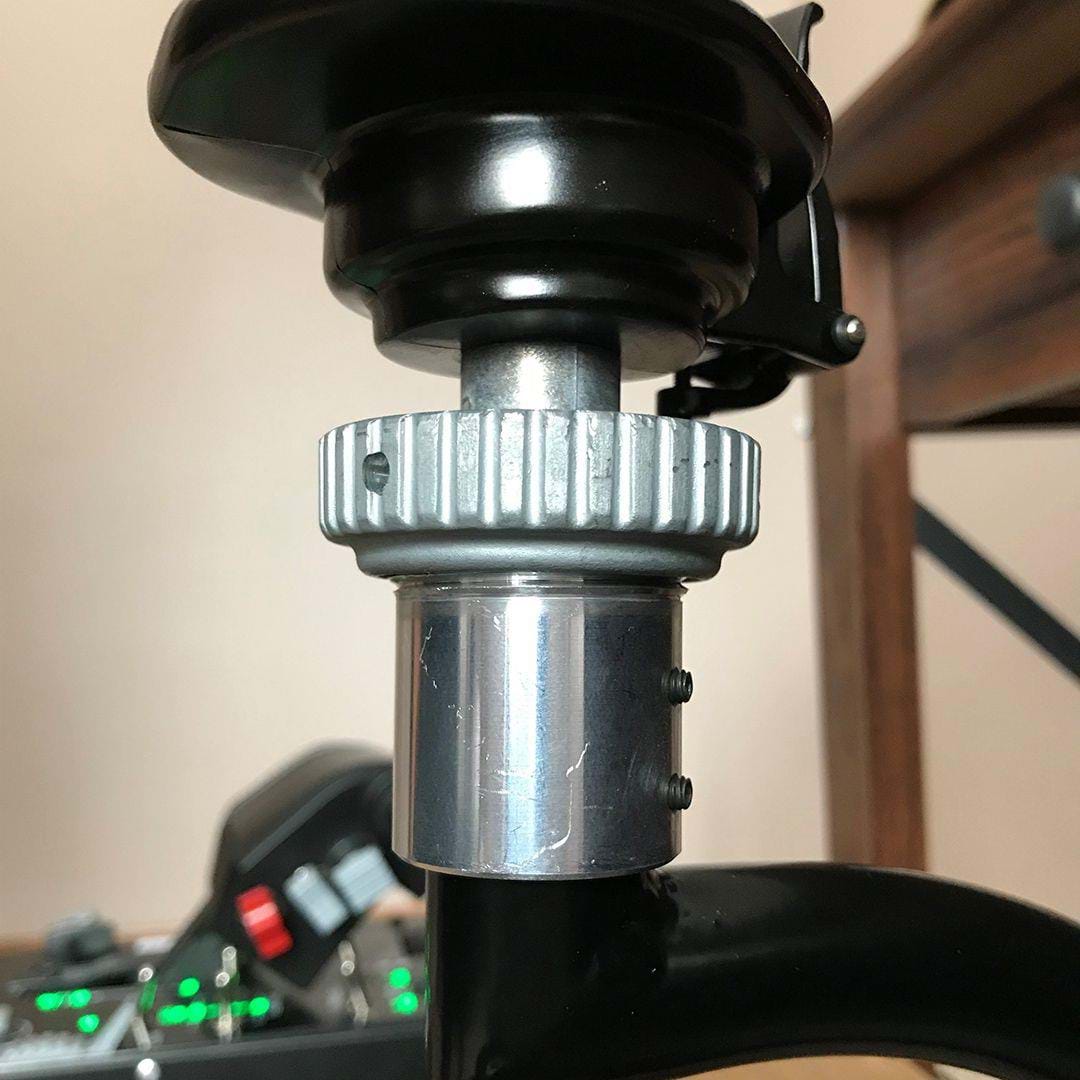 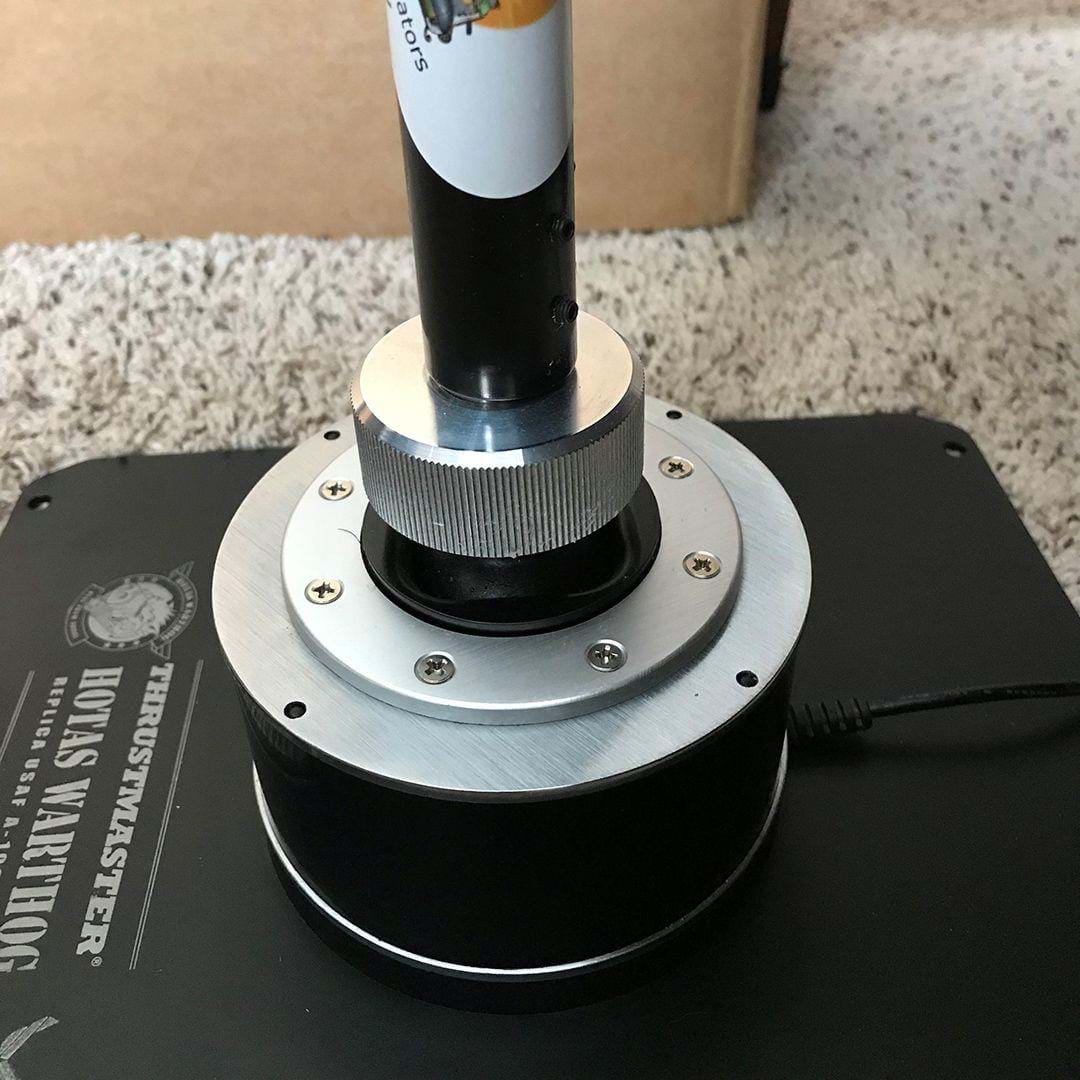 Mark has created a beautiful product. It was as easy as re-installing my centering spring, screwing the handle onto the extension with the built-in threads, plugging in his custom-fabricated wiring loom to the base and screwing the extension onto the gimbal.

It took me five minutes; I was very pleased! Additionally, on the base, there are exposed set screws which enabled me to adjust the cant angle of my stick. Most helicopters are usually offset a few degrees to make flying more comfortable. It was nice being able to adjust this to the Warthog stick.

After loading up X-Plane, I will admit, life wasn’t perfect. I quickly had to figure out how to fly with this new extension. Like anything else, once we do something, it changes how we perceive what “right feels like” and has the potential to make us more critical.

In flight simulation, this is a recurring issue and seems like a continual issue I’ve had pop up while talking to developers and designers of flight simulation equipment. I know how a real helicopter flies. I also know how simulators are limited on re-creating that feeling. I’ve had to struggle to find a happy balance between the two and lived with the fact that, as I fly helicopter simulators, I adapt to how those fly like I would any real helicopter.

After tweaking my control calibration in X-Plane (by simply re-teaching the simulator where center is and how far aft/fore/left/right I can move the stick), life was great. The extension is still a little stiffer than what one would feel flying a real helicopter. But, that would require ordering a new spring and realistically is probably not something I will do anytime soon as Mark’s extension really goes a long way to balancing that gap between realistic and adaptable.

I can easily fly planes and helicopters with the stick the way its setup with the extension attached. 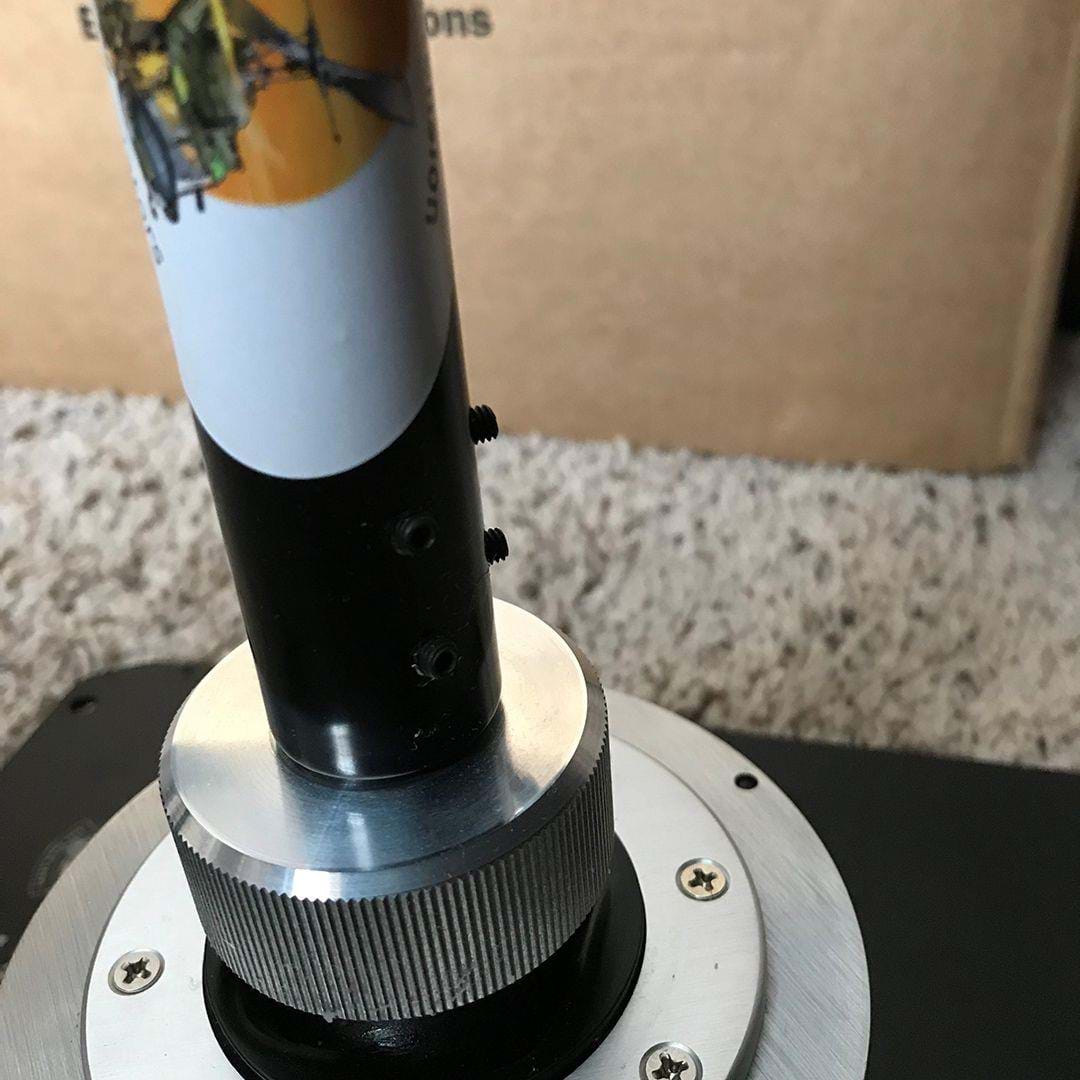 Digital Combat Simulator required more fine-tuned control tuning, but I would expect this from any change in hardware. I had to specifically adjust the X Axis sensitivity (usable range) to account for how I have my stick individually setup.

After a few more hours of flying and tweaking, I eventually found the perfect balance and now, I couldn’t imagine flying without Mark’s extension.

As I said, a Komodo Simulations product is still in my future. But even when that happens, it will not be because of a failure of Rainman’s extension. It will merely be to step that much closer to what I know – I wouldn’t be getting rid of the Warthog, that would just be reserved only for fixed-wing flying and even then, I would still want one of these!

Yet, as a very affordable, easy to install and no-nonsense product, you can’t get much better than Rainman Simulators Warthog extension.

Where to get the Rainman Simulators Warthog adaptor kit

Contact Rainman Simulators to know more about how you can order it.

I thought it was a bit expensive for what the product is, but is still easily affordable when comparing other options. The stick sits a bit high to account for the threading on top of the extension and I figured, if that were that shorter, it would make it more adaptable to a wider range of chair and cockpit setups. It has plug and play capability. It will require the user to modify their existing controller sensitivities depending on what their playing. But overall, simple, easy-to-use, great product!

Installation 10
Build quality 9
Total score
9.5
* The above final rating is calculated from a weighted average and not the direct arithmetic average. This means that some elements of the review will have a higher influence in the final score than others.