Goooood day folks, this is Bel Geode, on leg three of our Purple Hat Tour. We're in the tropics at Nimbus Simulations TFFJ, St. Barthélemy! 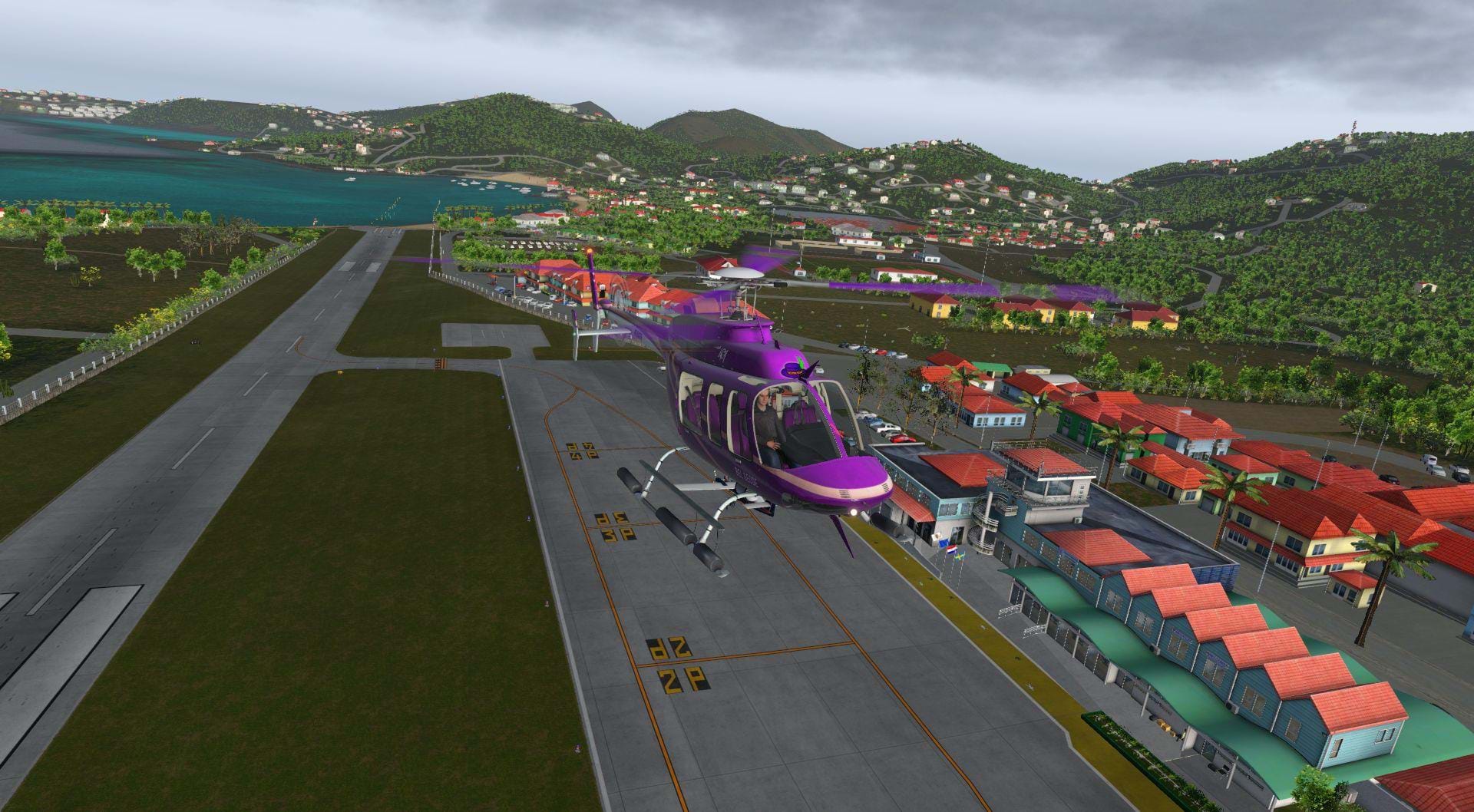 Most of us flight simmers are probably already familiar with St. Barthélemy from its neighboring island of St. Maarten. Of course, in real life, a few short months ago, both islands were devastated by Hurricane Irma. This review and the accompanying YouTube video are dedicated to all those affected by this natural tragedy.

I also want to take the time to give huge thanks to Nimbus Simulations for the review copy of this scenery!

St. Barths sits about 22 miles southeast of St. Maarten, and has the distinction of being home to the third most dangerous approach in the world, according to The History Channel (take a guess in the comments as to what # 1 and # 2 are...).

A volcanic island only about 10 square miles big, St. Barth's has changed ownership a few times over the centuries, originally being settled by the Arawak and Taino Indians. Christopher Columbus named the island for his brother, and eventually the French settled the island and began cultivating cocoa. The island was given to Sweden in 1784 in exchange for trade rights, then back to France in 1878, after storm and fire ravaged the island a few years prior.

It remained under the auspices of Guadeloupe until about 2007, when it became its own collective, still under French rule. While Sweden was responsible for the island becoming prosperous, almost everything on the island is named in French.

Everything that is, except the main town of Gustavia, and the airport we will be reviewing, named for the former king of Sweden- Gustav III.

We're now going to take a closer look at the island, through the eyes of the incomparable Nimbus Simulations. While the airport is definitely a centerpiece to this tropical jewel, it is hardly the only eye candy that Nimbus has given us in this payware package for X-Plane 11 and 10.

But let's start with the airport itself anyway.

An Approach to Remember...

Without a doubt, one of the true tests of skill for most GA flight simmers (excluding most of us helicopter pilots), is the treacherous approach into Runway 10. You've seen this one... This is the second most popular tourist spot in that neck of the woods (behind Maho Beach on St. Maarten), despite having signs imploring people not to loiter in the area, for fear of being hit by low flying aircraft.

By low flying, they mean LOW flying. It is not uncommon for approaching general aviation craft to come in so low that you can literally reach up and touch a landing gear. The approach itself is not a precision approach, leaving very little margin for error. Let me emphasize this... VERY LITTLE margin for error. Too high, you won't touchdown at the appropriate spot and run the risk of rolling right into the bay, and possible sunbathers. Too low and you'll hit the hill before the runway, and possibly take out a few cars or pedestrians using the busy traffic circle conveniently placed on short final. 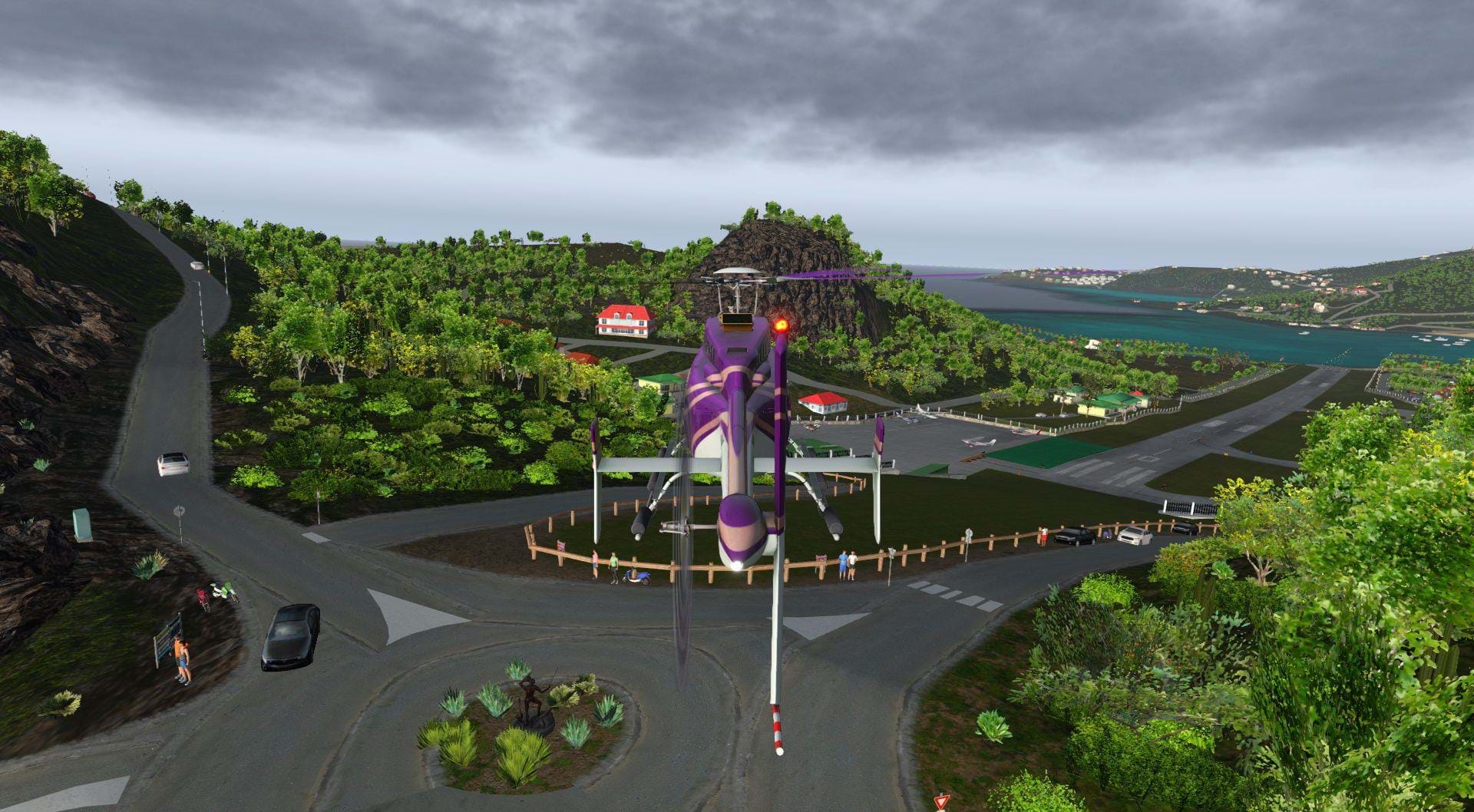 Needless to say, us helicopter simmers have it considerably easier. But I do not recommend trying this in a fixed wing aircraft unless you are confident in your ability to pull off this challenging approach. I would definitely not recommend trying it at night. The only thing more disconcerting than this approach at night is a night aircraft carrier landing.

With that said, Nimbus Simulations has covered the proper slope, and given a real approximation of how dangerous this approach can truly be. Incidentally, trying to maintain a stable hover in rising winds off the beach... It's a handful.

You'll also be pleased to know that there is a helipad by default at the airport, just for us rotorheads. 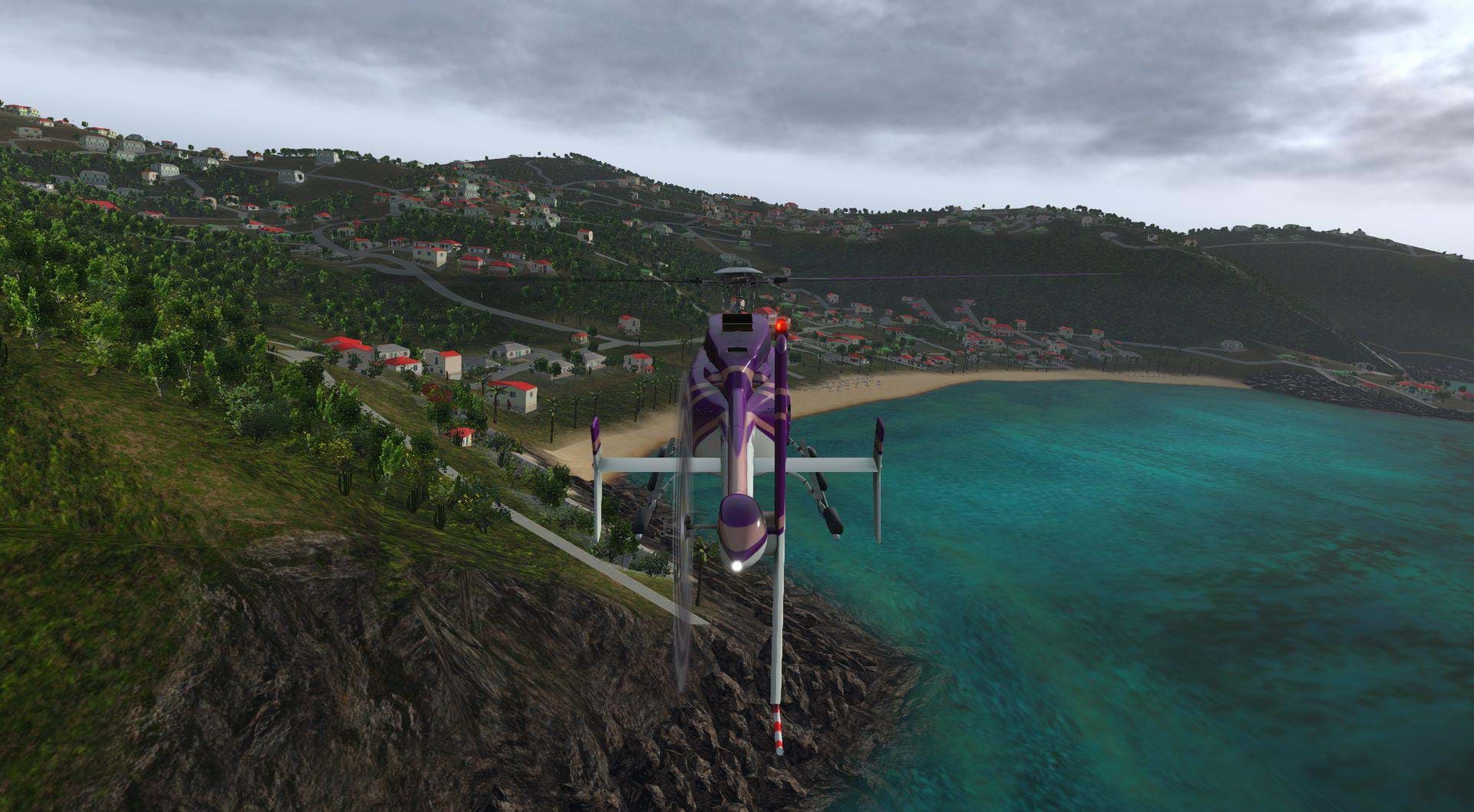 One of the most interesting things about this island is that some of the villages that pepper the coastline are named “Anse” something. Anse, translated from French means little bay, or alternately, handle. Given the shape of St. Barth's, it is not uncommon to find communities such as Anse des Cayes, and Anse des Flamands built up around these little bays.

Nimbus Simulations has gone to great lengths to depict the many areas of the island where people call home. From modest cottages, to the priciest chateau for the affluent, it's all here. The variety of homes is also impressive to note, as each village seems to take on its own character. While there are common themes to a lot of the houses, as you would expect for tropical style dwellings, you certainly feel like you are visiting different neighborhoods simply based on the architectural styles incorporated within.

Even the island itself, with its lush and varied flora, and in some places, harsh rocky slopes has its own unique style to it, that is unmistakably the work of Nimbus Simulations. It should go without saying that the island takes full advantage of the technology X-Plane 11 brings to the table, with regard to shading and shadows, as well as the rich colorful palate that certain weather and times can bring. The terrain mesh is so finely tuned that the island gently undulates where it should, or bears stark angles around the mountains that should have them.

In short, you FEEL like you are in the eastern Caribbean. 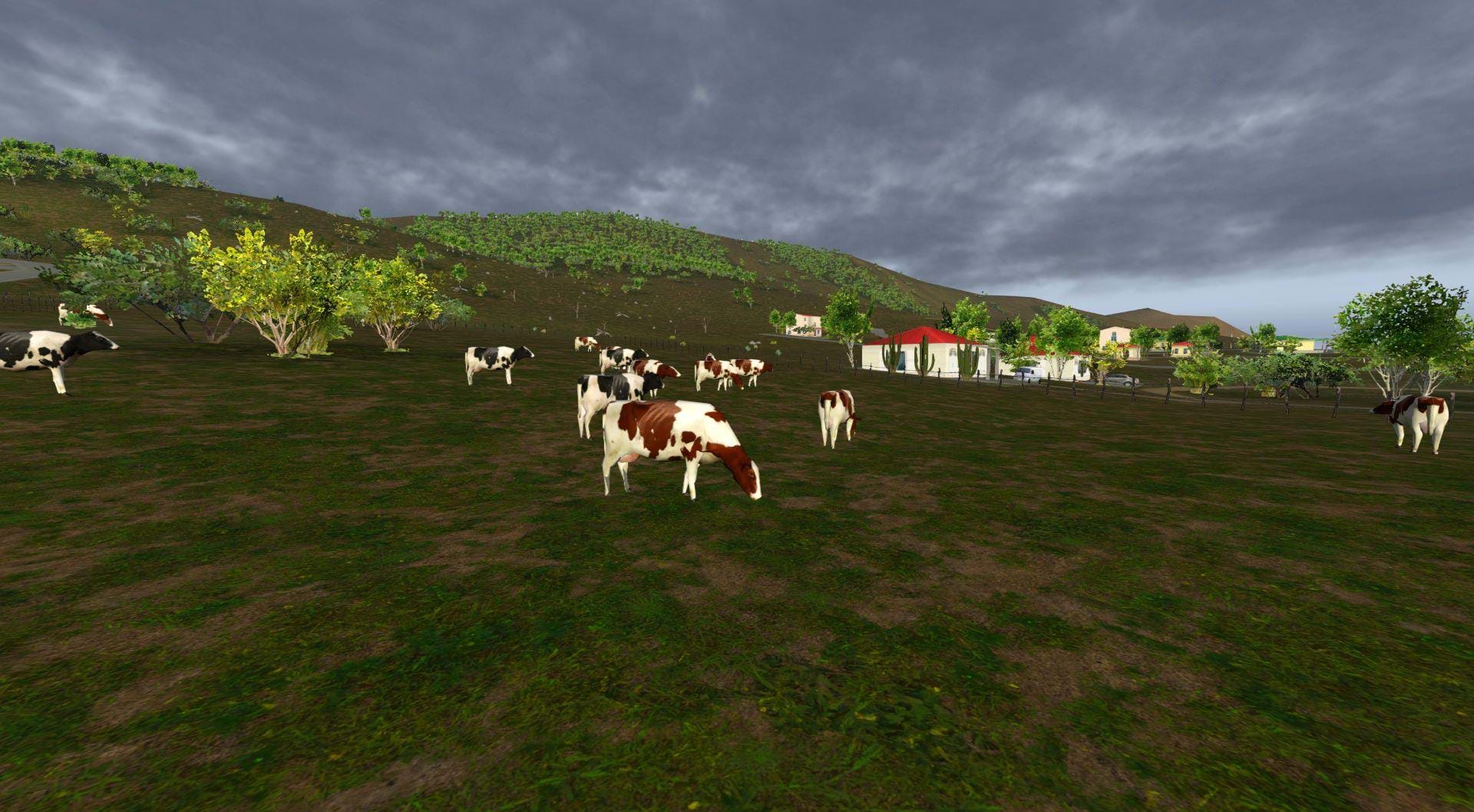 As cars make their way around the island, and people congregate in certain areas, it is clear to see that this island is full of life. However, that is not the only forms of life Nimbus has chosen to represent here on St. Barth's.

Yes... You are seeing cows.

Since the island is not ideal for farming (with the exception of the cocoa tree, which can grow on any tropical hillside), it certainly has ideal spots for raising livestock, or creating fisheries. Folks, I can honestly say that this is the first scenery I have encountered that comes with cows, and they are magnificent! I spent more than just a few minutes hovering over them in awe, and I am not ashamed to admit this. Unfortunately, they are not animated, but they are fantastic nonetheless. In fact, the only thing on the island that is animated would be the cars on the roads.

This is forgivable though, since most of us would rather not spend 10 minutes staring at cows from our Bell 407.

Or... maybe that's your thing too. I won't judge. Just don't tip them over. 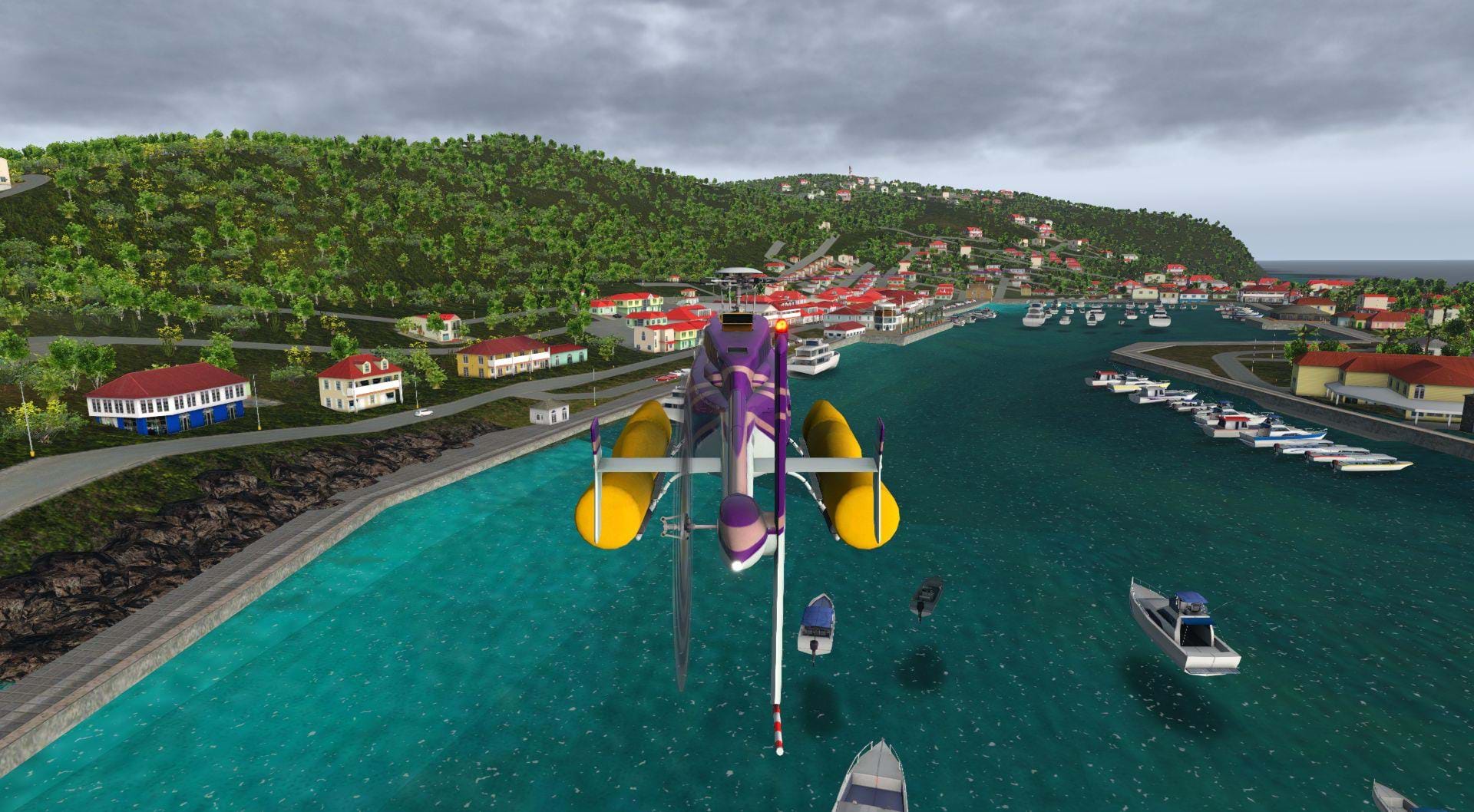 Without a doubt, one of the coolest areas of the island (airport and adjoining beach aside), is the capital town of Gustavia, and its harbor.

Aside from the visual treat of eastern Caribbean architecture, and notable landmarks such as Fort Gustav, with its ruins and lighthouse painstakingly recreated, the harbor itself is a sight to behold. One of the things Nimbus Simulations has done to separate themselves from the pack is to give the impression of how crystal clear the water in Gustavia harbor really can be at times.

How they were able to accomplish this was to hand place boats anchored in the harbor and creatively place “underwater shadows”, which when seen from the air, immediately register with your brain that this is a shallow waterway of translucent ocean water. The result is striking, even when seen on cloudy days. The mind plays tricks on you and you can swear that the shadows move depending on your position.

One of the best optical illusions I have seen thus far.

If there is a down side to the gorgeous water, it is that unlike the default X-Plane water that surrounds the island as “deep ocean water”, it does not reflect the sunshine as readily, and comes across as “painted on”, when viewed in certain lighting conditions. I am sure that a compromise had to be made between making the water transparent, and going for the artistic license of creating the realistic boat shadows. It is probably not something most will pay attention to however, so not something to crucify Nimbus over.

If I could have made one suggestion prior to this scenery being made available, it would have been to add a large enough yacht that I could land on with a helicopter. If you have the same idea, you may be happy to know that you can easily do this yourself within WED, the World Editor available from Laminar Research for free. 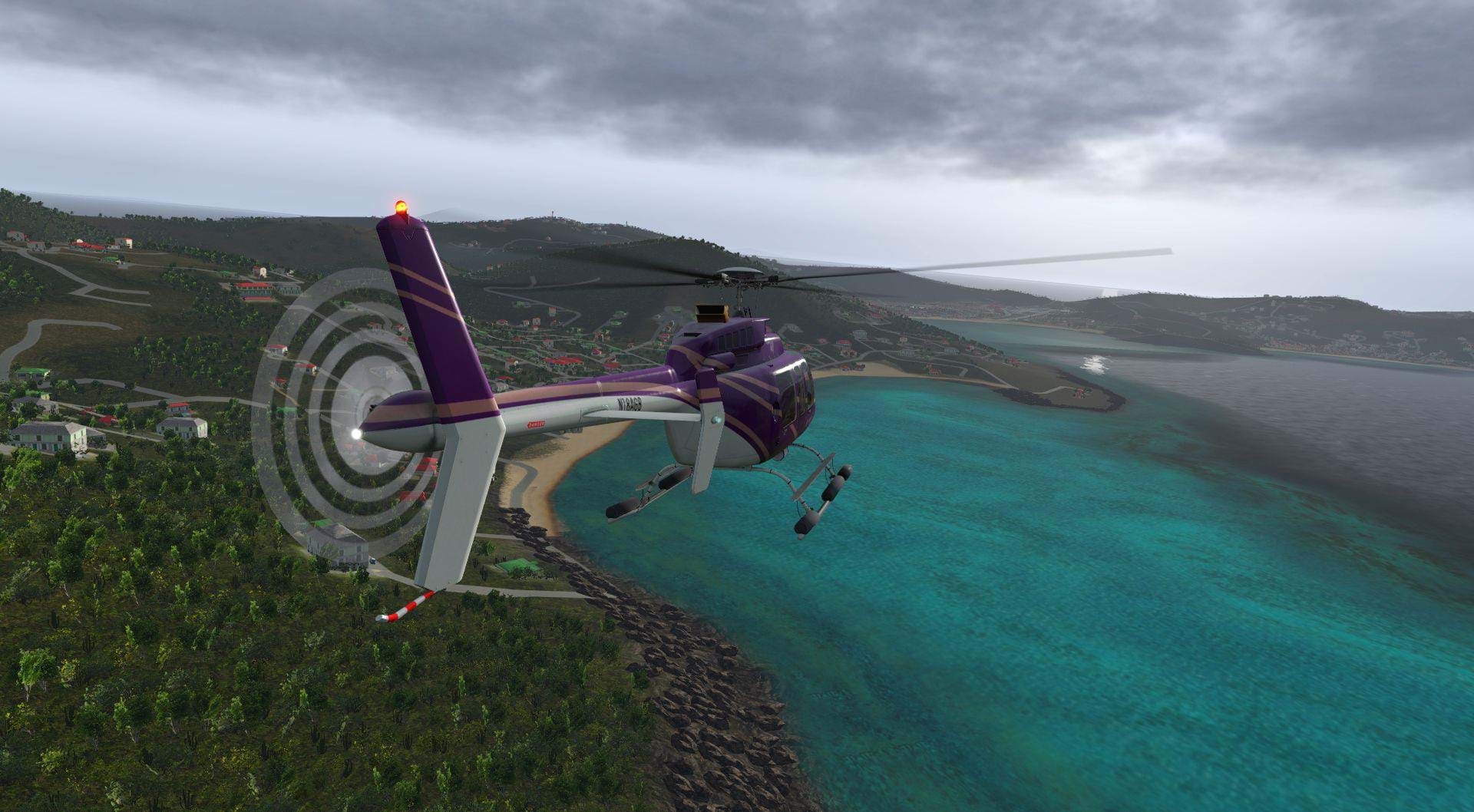 Nimbus Simulations has proven time and again that they are a cut above the rest, with both their attention to detail in their scenery as well as their practicality when it comes to sim performance for both scenery and aircraft. Installation is as easy as you would expect. Simply drag and drop into your “Custom Scenery” folder, in the main X-Plane directory.

St. Barth's is no exception to this trend for which Nimbus is known. While it would have also been nice to get St. Maarten attached to this, the way some other developers have done in other simulators, when you REALLY get down and into every nook and cranny of this island, there is so much to see that you will undoubtedly be getting your money's worth.

Once Laminar Research makes their rumored ATC and AI updates to X-Plane 11, it will be fascinating to see how AI handles the approach into runway 10, or if they will opt to land the other way (considerably safer for plane and pilot). For us helicopter pilots, be prepared to practice your hovering skill, as you take in all the nifty little villages, and hidden gems that await us.

As far as VFR flying goes, St. Barthélemy may be a small island, but it is chock full of intriguing vistas.

Be sure to say hi to the guy with the phone on a selfie stick. Try not to hit him as you come in to land.

Check out the video!

The review video as part of the “Purple Hat Tours” (as well as other amazing videos!) may be found on the Bel Geode YouTube channel.

Installation 10
Mesh 10
Textures 9
Buildings 10
Visual impact and quality 10
Frame rate impact 10
Total score
9.8
* The above final rating is calculated from a weighted average and not the direct arithmetic average. This means that some elements of the review will have a higher influence in the final score than others.
Click here to purchase/download or more information