Goooood day folks, this is Bel Geode, and we're on our second stop in the Purple Hat Tour. This time with iBlueYonder's Nantucket Memorial Airport.

I'll remind you that the goal of this series is to take a look at new scenery that I feel is optimized for VFR pilots (such as us “rotorheads”). I also have an accompanying video on my YouTube channel.

It's Autumn, so today we'll hop in the old Wilco/Feelthere Tiltrotor and check out Nantucket Island. 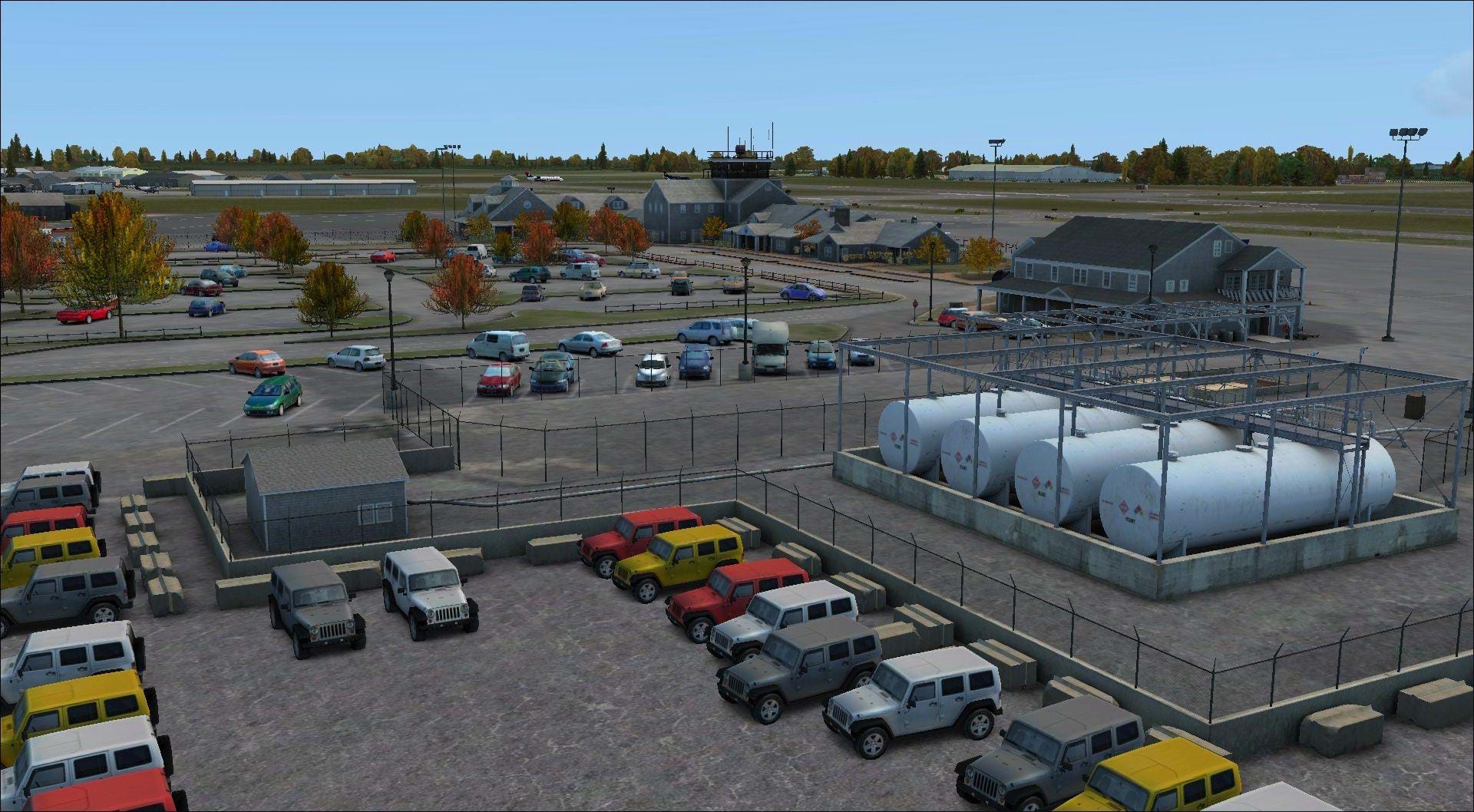 iBlueYonder is the brainchild of Bill Womack. If Bill's name does not sound familiar to you, perhaps if I mention the Orbx sceneries Siletz Bay State Airport, Cushman Meadows, Bear Gulch, or even Stark's Twin Oaks Airpark (one of my favorites), that might jog your memory.

In 2013. Bill announced that he was forming his own company, and set out to create some of the most picturesque destinations imaginable. Since that time, he has given us such gems as the freeware Heron's Nest -- a private island complete with your own hangar and seaplane base... Bring your own bush/float plane though.

Nantucket Island marks his first FULL scenery package under the iBlueYonder name, and it is impressive indeed. 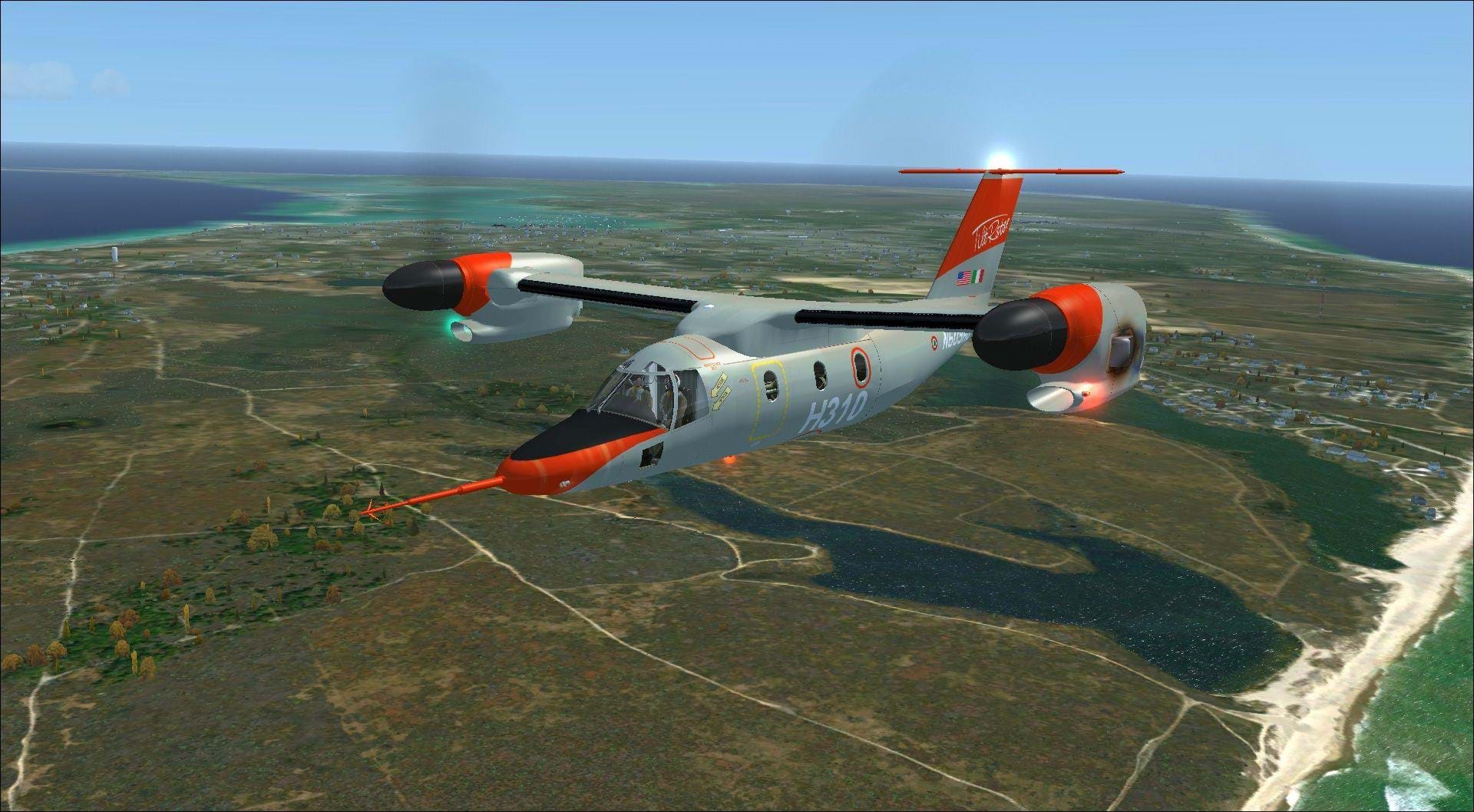 One of the first things one notices when flying into or out of iBlueYonder's Nantucket is the realism. Bill has gone above and beyond to ensure that not only are you seeing what the actual island looks like, but everything intrinsic to the location. This includes the hardy vegetation scattered around, the distinctive Cape Cod style housing, the daunting cliffs of eroded beachfront, and the many, many shoals and tidepools that dot the island.

Everything is hand placed with meticulous detail. The terrain texture you are greeted with is ortho-photo, right down to the rugged coastline. The scenery meshes well with vegetation addons such as the previously reviewed TerraFlora, and around the airport, Bill himself has added his own trees and 3D grass. Since the detail has been amped up, this island becomes a joy for both helicopter pilots, as well as GA airplane pilots. One can fly up and down the coastline all day long and marvel at the waves. Go inland and try your hand at one of the bush strips near the southern point of the island, or if you have floats, try your luck landing on the inland shoals.

Just be careful along the eastern end, as those bluffs are rather impressive, and tend to pick the winds up something fierce. Luckily there are three lighthouses on the island to help you navigate, aside from the beacon at Nantucket Memorial Airport.

If there is really only ONE negative that I could point out, it is the lack of helipads for us, rotorheads. When I met Bill and his wife at FlightSimCon 2017, I made mention of that to them, and Bill has assured me that in upcoming sceneries he will definitely keep the helicopter community in mind.

In the mean time, we are VTOL... WE can land ANYWHERE! There is no shortage of places to visit on this island. 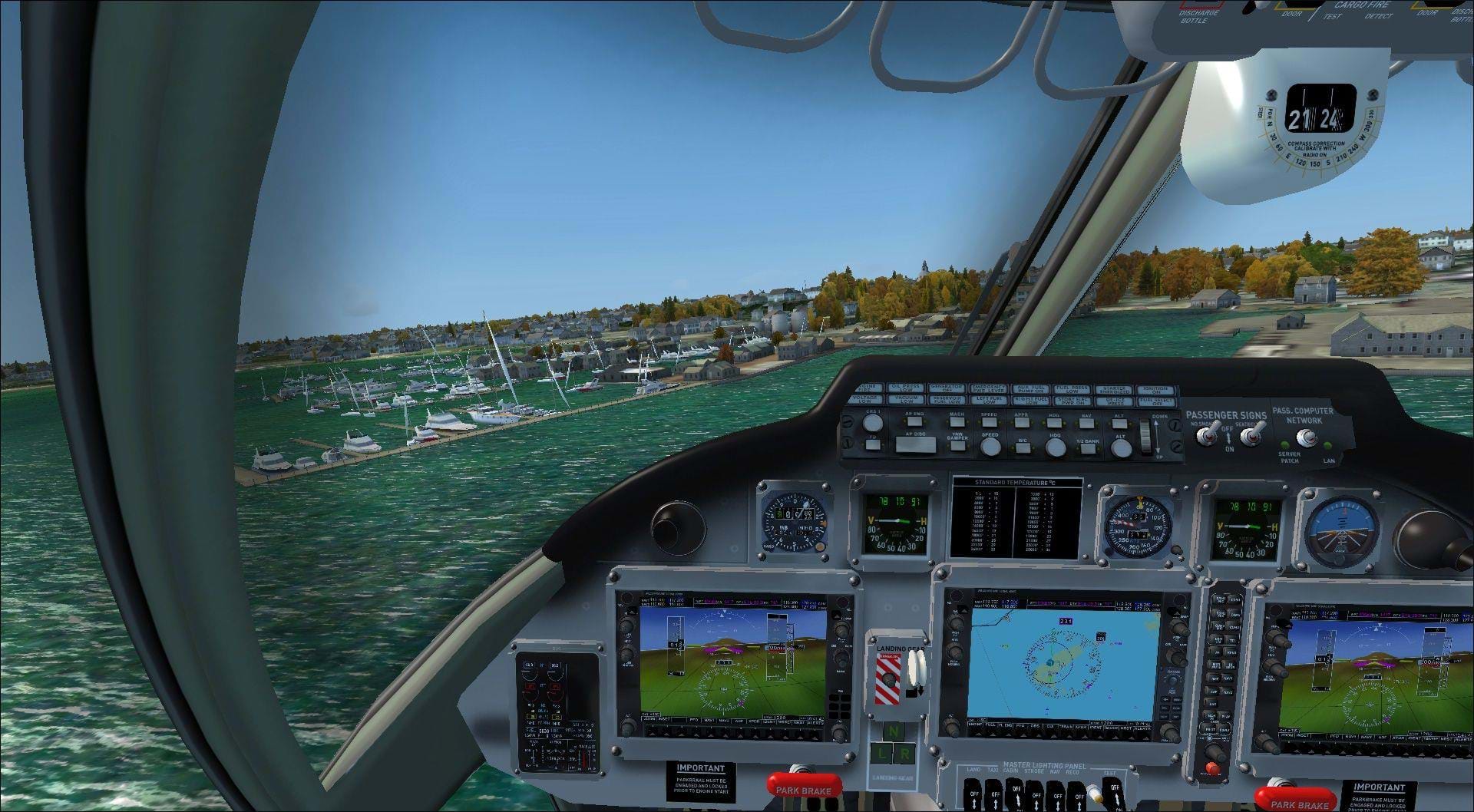 One of the things that Nantucket is well known for, is being a playground for the affluent. This small island has arguably some of the highest real estate value, and while it may seem that the houses are described as “quaint”, or even “cozy”, do not let that fool you. These are top dollar properties all across this island.

Not surprising then, that iBlueYonder has chosen to make appropriate scenery objects to fill out the town of Nantucket. Each Cape Cod house fits in its lot, and the abundance of churches, docks, and warehouse buildings (some storage units being as old as WWII), will definitely give you the feel that this is a self-sufficient community that prides itself on its upkeep. 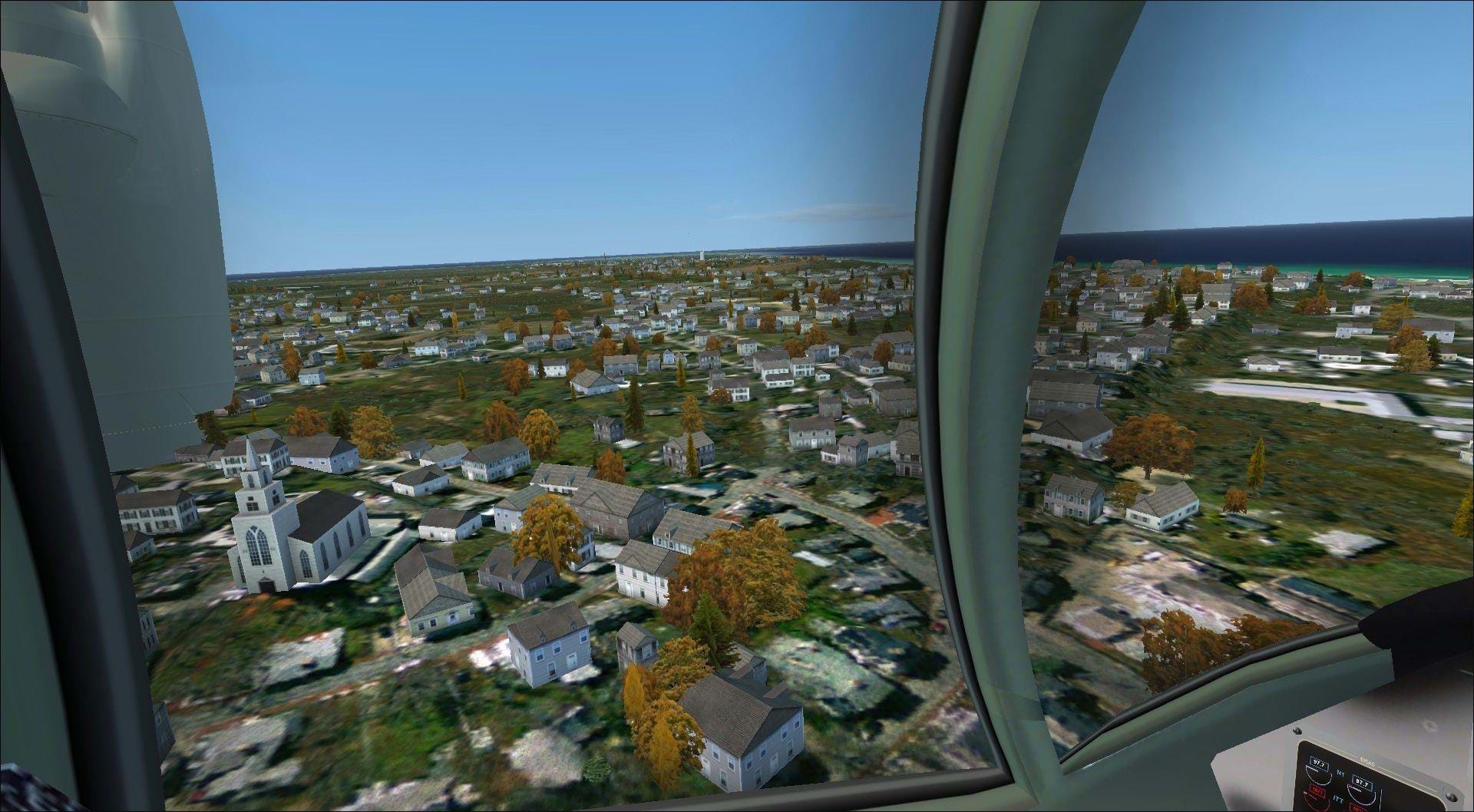 Since this scenery works for both FSX (boxed/steam) and Prepar3D (v3 and in testing as of this writing for v4), you can play with the amount of autogen you see. For a real treat, if your computer can handle it, put autogen to extremely dense, and see just how many houses (and sailboats) Nantucket actually has!

For those who would rather ride the waves, than fly over them, a regular ferry AI to Cape Cod arrives and departs from Nantucket Harbor. Unfortunately, no, you cannot land your helicopter on it, or its base in the harbor. Yes... I tried it. 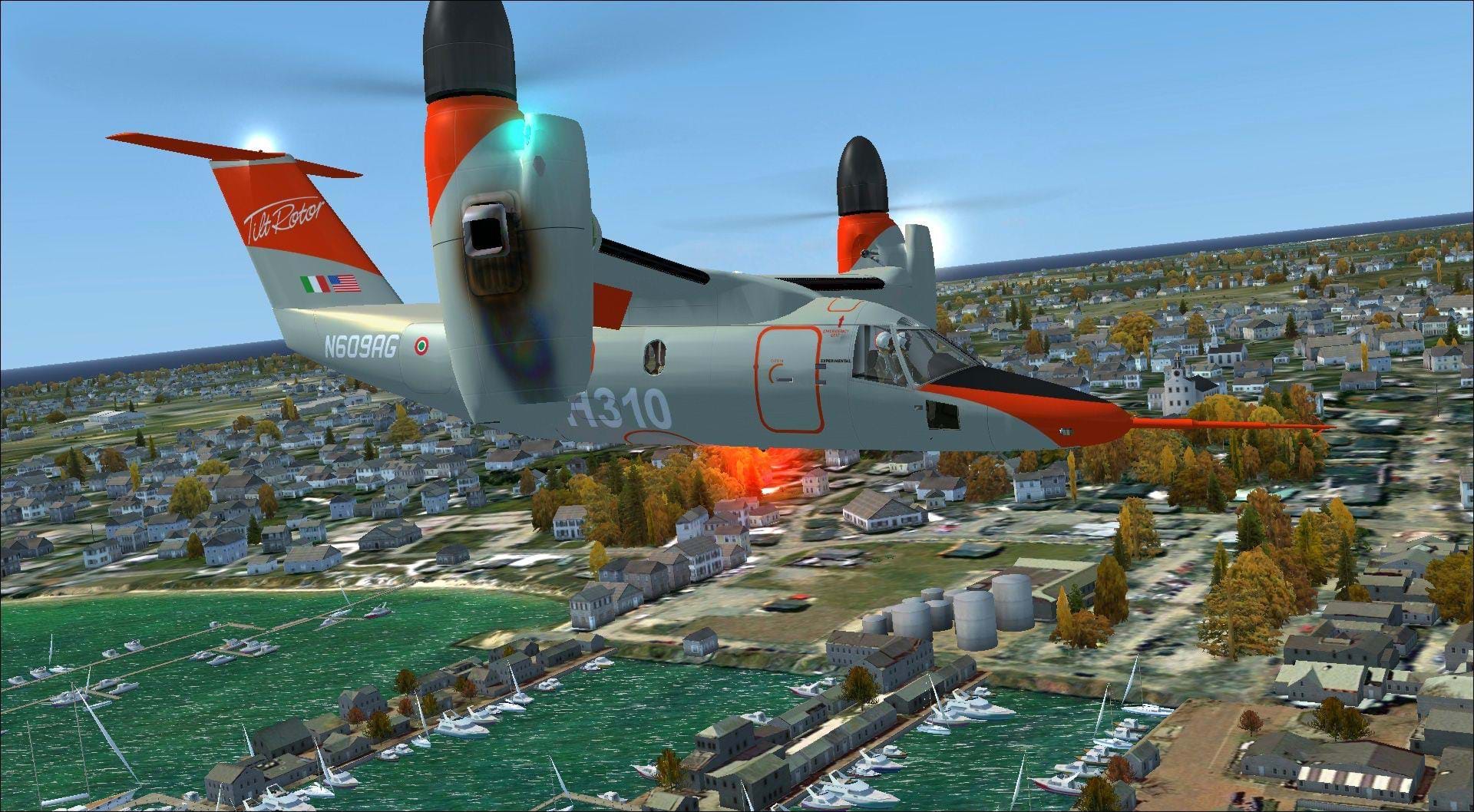 For the visitor to Nantucket, undoubtedly one of the more interesting sights to see are the three lighthouses that dot the island.

I for one, am a fan of lighthouses, so naturally I had to find them all. The first one is easy to locate, if you have found the harbor. The Brant Point Light marks the entry to the Nantucket Harbor, and is easily identified by its boardwalk leading to the structure. Though this is one of the shorter lighthouses on the island, it nonetheless has its own charm to it. 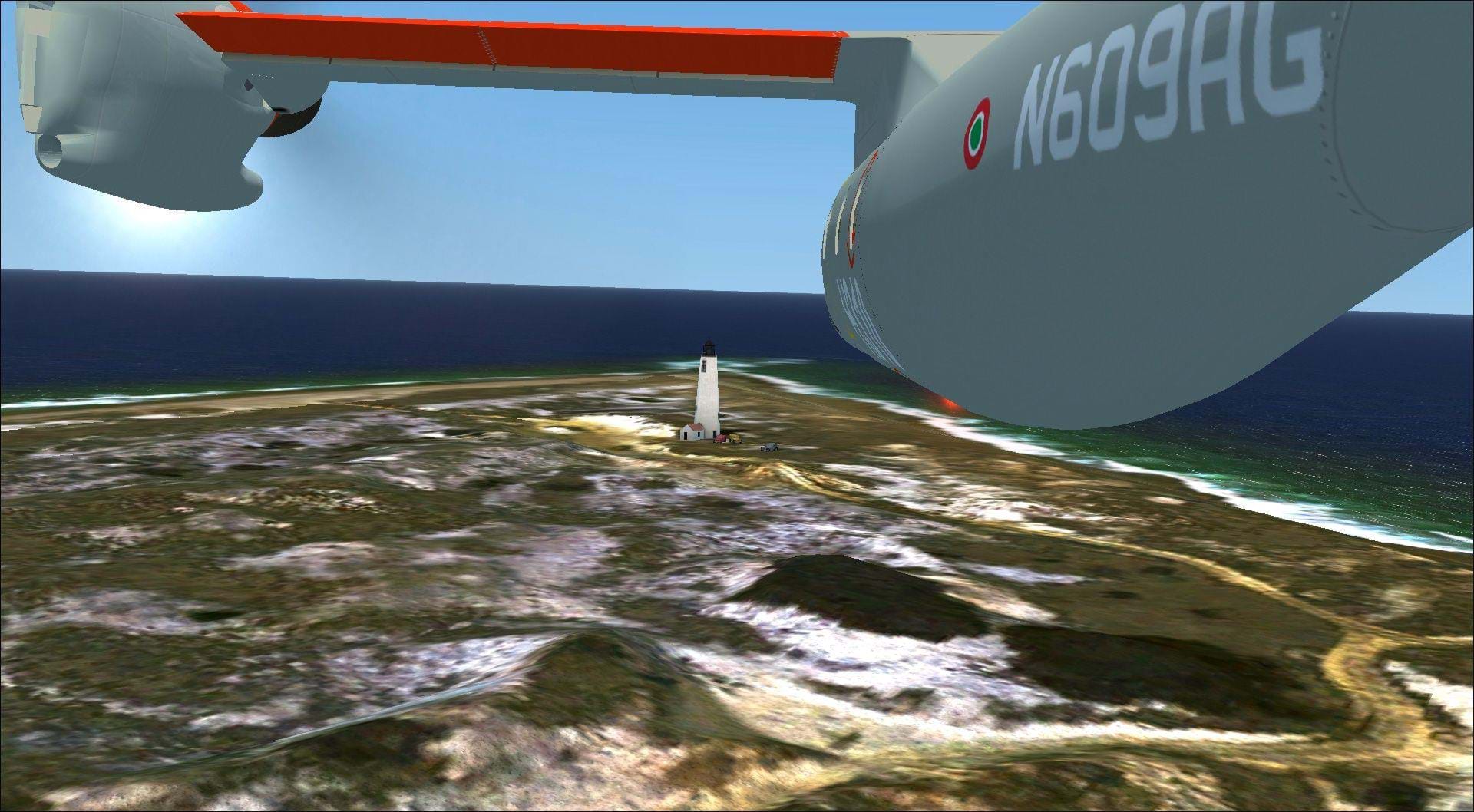 For our next lighthouse though, you will need to follow the coast to its most northerly point. There you will find Great Point Light (formerly Nantucket Light). This lonely lighthouse has had a history of being destroyed and rebuilt. Originally opened in 1784, it succumbed to fire in 1816. The replacement stone tower was built a year after and lasted till March 1984, when a storm toppled the whole thing. It was rebuilt once more in 1986 as the current structure that sits defiantly on the dividing line between the Nantucket Sound, and the merciless Atlantic Ocean. 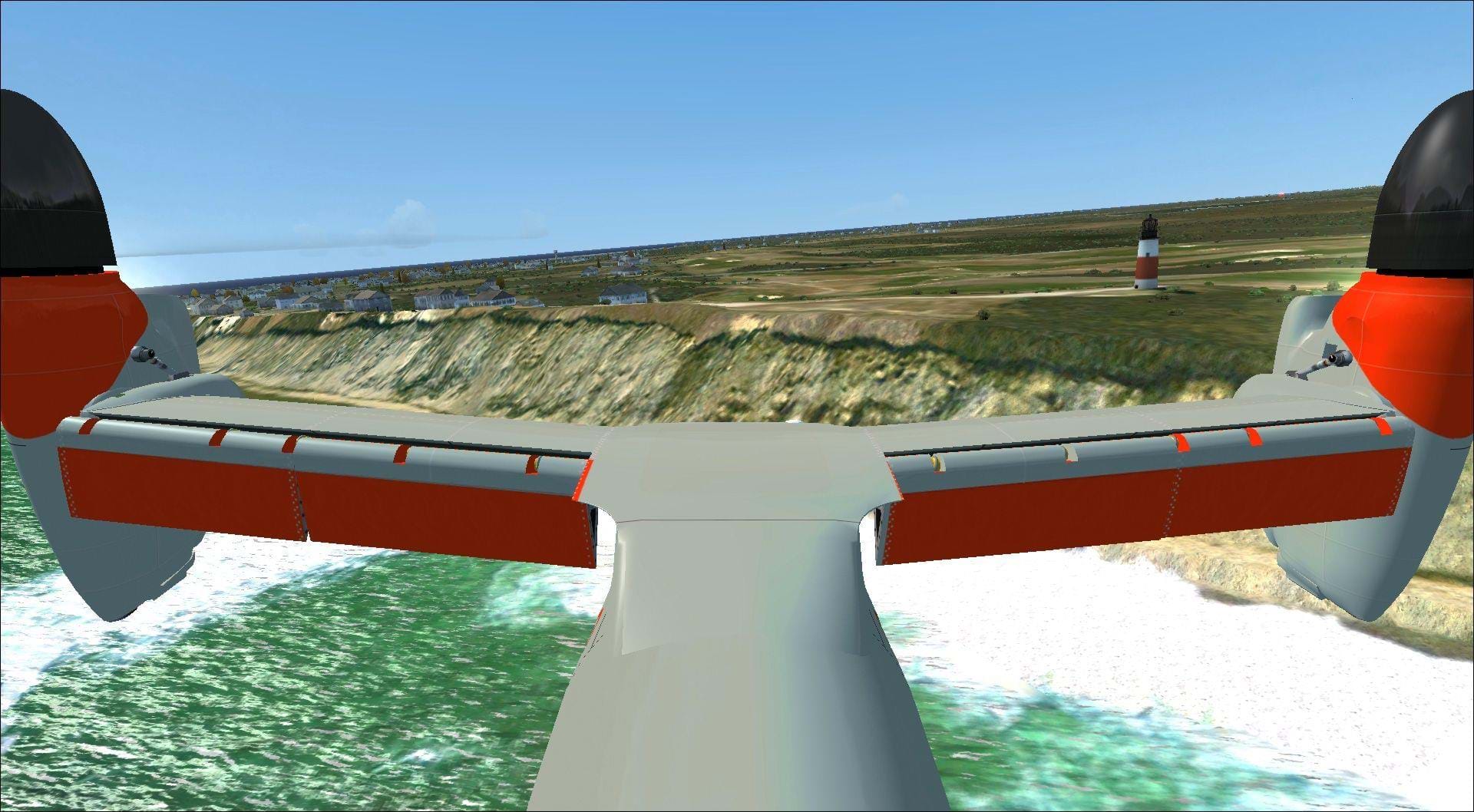 Our third lighthouse sits in an unusual spot, and although it does not have the calamitous history that Great Point does, it does have the honor of being the only lighthouse physically moved.

Sankaty Head light sits halfway down the eastern coast, an area whose shoreline has been eroded over the ages by the aforementioned merciless Atlantic Ocean. Menacing bluffs leading to treacherous shoals out to sea, make water navigation an ordeal. So, in 1850 it was decided to build this lighthouse to warn mariners of the devious eastern coast.

All was well until the beach erosion threatened to topple the red striped lighthouse into the sea. In 2007, the Sconset Land Trust had the structure physically moved 400 feet away from the disappearing coast. Hopefully where it is now, it can remain for another hundred years, before Mother Nature comes knocking.

All of these landmarks and more are available for you to explore in this scenery. There is even the original farmhouse somewhere on the airport property, where good old Holm gave the ok for those young whippersnappers to land their fancy airplanes on his lawn. 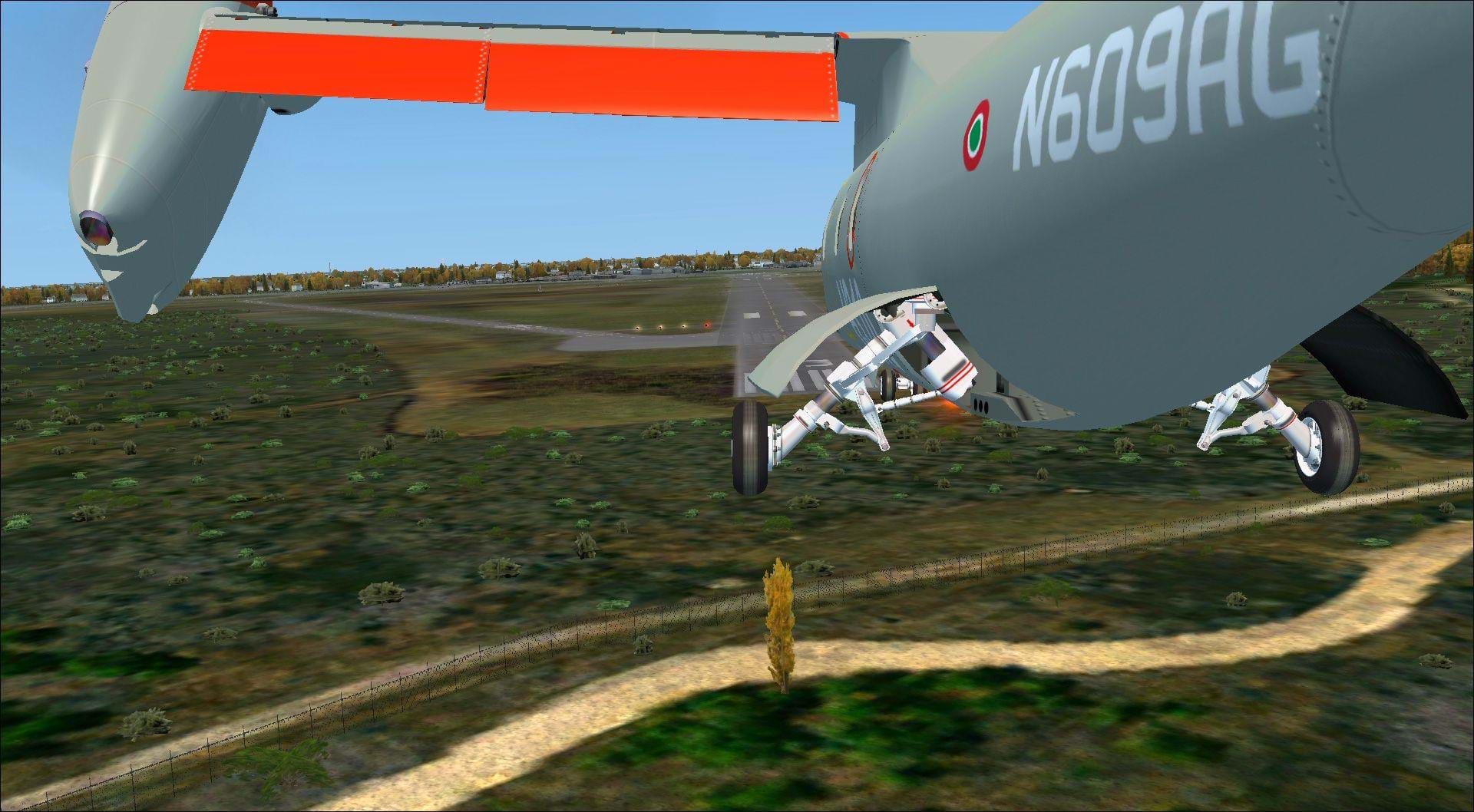 As iBlueYonder's first full scenery as a company, there is little to dislike. The two things that I found that I am not a huge fan of, the airport ground texture (which relies on a terrain file in FSX/P3D that does not fit for all types of terrain), and the lack of helipads, are hardly deal breakers.

When I first got home from FlightSimCon 2017, I was so impressed by both Bill and Dawn, that one of the first things I did was purchase this scenery. I have not been disappointed.

As I mentioned earlier, Bill is in the process of testing this scenery for P3D version 4. When last we talked, he also mentioned a desire to have it in Dovetail Games' Flight Sim World, pending receipt of their SDK. It is my hope that both of these projects will be completed soon, then you can use the unified installer for any iBlueYonder scenery to add those versions to your sims, should you have them.

So, you want to run an air taxi service between the mainland and Nantucket? This is the island for you. Park where you want at the airport, and shuttle those upper-class fares to their destination in faster time than the old ferry.

Check out the video!

The review video as part of the “Purple Hat Tours” (as well as other amazing videos!) may be found on the Bel Geode YouTube channel.

Installation 9
Mesh 9
Textures 10
Buildings 10
Visual impact and quality 9
Frame rate impact 10
Total score
9.5
* The above final rating is calculated from a weighted average and not the direct arithmetic average. This means that some elements of the review will have a higher influence in the final score than others.
Click here to purchase/download or more information