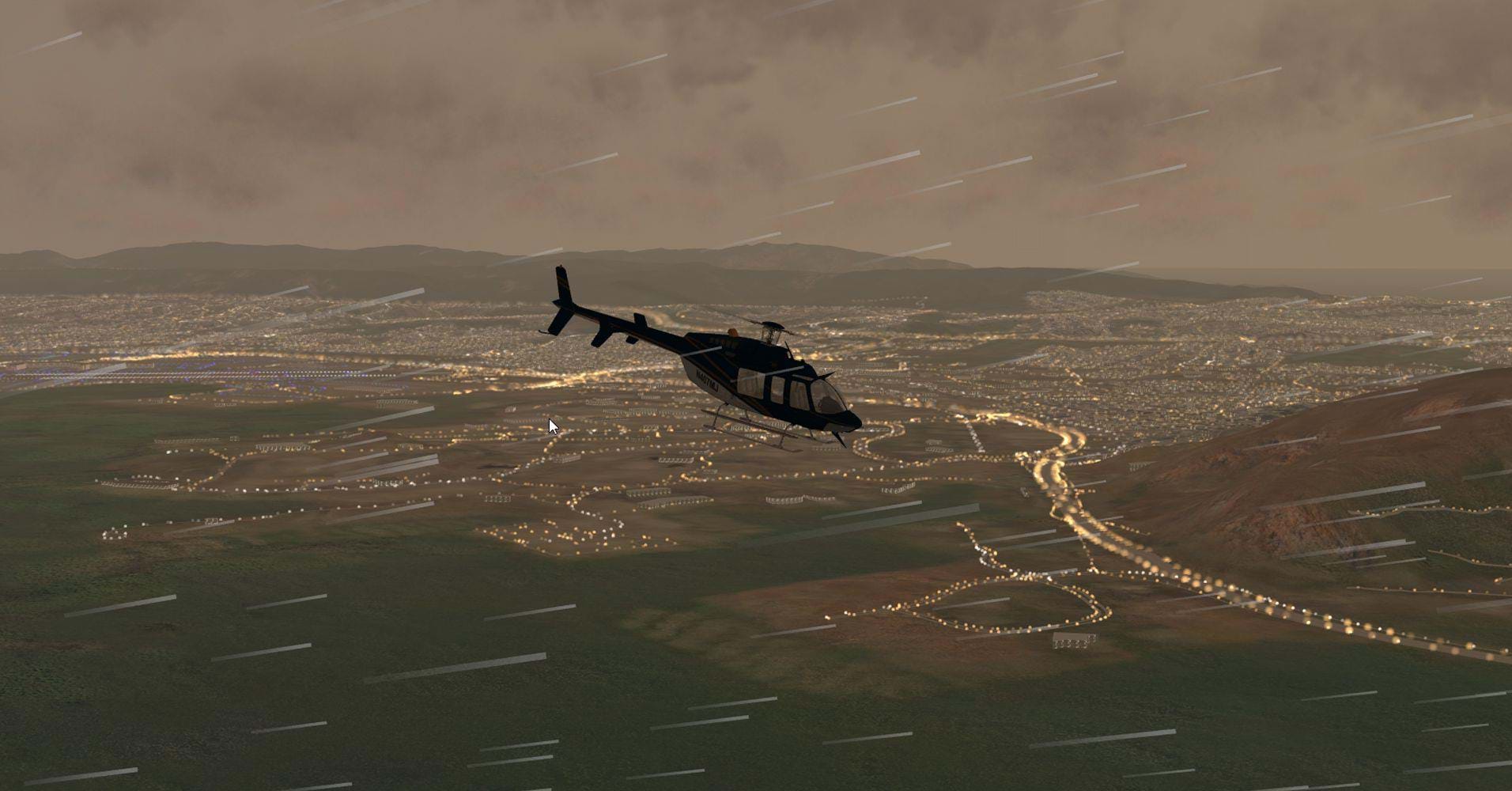 FlyInside is better known for their addons for simulators that had (until some time ago) no support for VR. Namely X-Plane and P3D which, for quite a while, were only VR-capable using FlyInside’s software.

And what a nice job these folks did.

As we know, X-Plane and P3D have now native VR so FlyInside lost a big chunk of the reason why they got in business in the first place. Granted, FlyInside has some cool features that, for a lot of users, still has them use the software but, let’s be honest, I am pretty sure sales started to drop or will be dropping very soon for FlyInside.

And that, I believe, was a big part of why they decided to develop their own sim.

A preview? But it’s already out!

I know it’s out, but I can’t call this a review. We’re talking about the first public version of a software that’s out as an early access release.

Do we need a new sim?

This is the question we hear every time someone talks about the development of a new simulation software.

Do we really need a new sim?

Well, as much as we need a new car manufacturer. It's not like we need their cars but you never know when this new manufacturer doesn't come out with something really good or a technology breakthrough.

I don't think we need a new sim because our current ones are no good. What we need is for companies to bring new and better features or technologies to our sims. And that path might take us to have a company developing a new sim.

Did we need X-Plane 25 years ago? No. But here it is, it has grown, it has built its own community and it’s been slowly crawling into simmers’ hearts.

So, no. Don’t expect it to be a sim that “you need” because, if you are happy with the sim you have right now, you “don’t need” another sim. But do keep in mind that these new sims can make our hobby progress so, in the interest of the hobby and our community, you should, at least, take a look at it. Especially since there’s a free trial waiting for you.

FlyInside Flight Simulator is still in early access. The current version is 0.3.1.0 (not even version 1) so don’t expect a fully finished product.

It was also made with a mentality of “VR-first” so you can expect a very nice VR experience in terms of performance and a lot of the user interface (UI). In fact, the sim is very fluid in VR, but you quickly understand why.

The scenery is not very complex, there aren’t a lot of trees out there and you still don’t have things such as traffic on the streets (cars) or even water. It was a bit of a letdown, but it works, and it keeps performance high.

In a sense, it reminds me of Aerofly AFS2 which also has great performance in VR but then you start noticing these things and it adds up: less stuff to process equals better performance.

AFS2 does have the ability to land on top of buildings (or crash against them if you are not careful), though and the scenery is custom built and very polished. The scenery in FlyInside Flight Simulator seems to be some sort of procedural creation based on Open Street Map, which can make things odd. Like buildings in the middle of non-existant bridges, for example, such as the one below that seems to be heading to Alcatraz (yes, this is San Francisco). 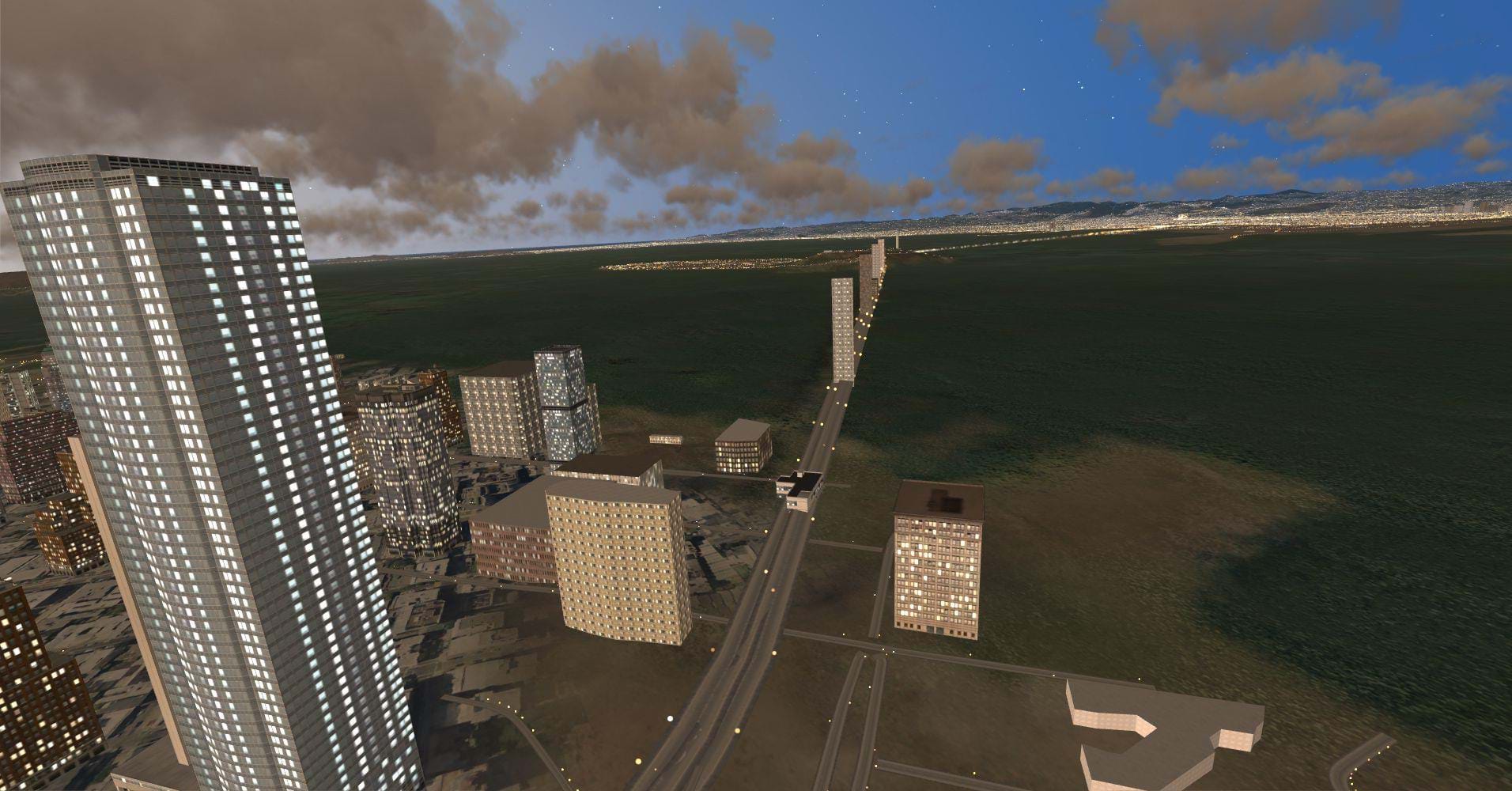 The clouds are very well done and, even with a cloud-filled sky, the sim behaves brilliantly. Lighting is extraordinary. Visually speaking, my only problem is the scenery itself. I just wish FlyInside had upped their game on this area.

VR works very well (as expected from a company that has been built on top of it) so that’s a good experience for you to have right there.

Oh and I did find helipads. But they were not landable, though... 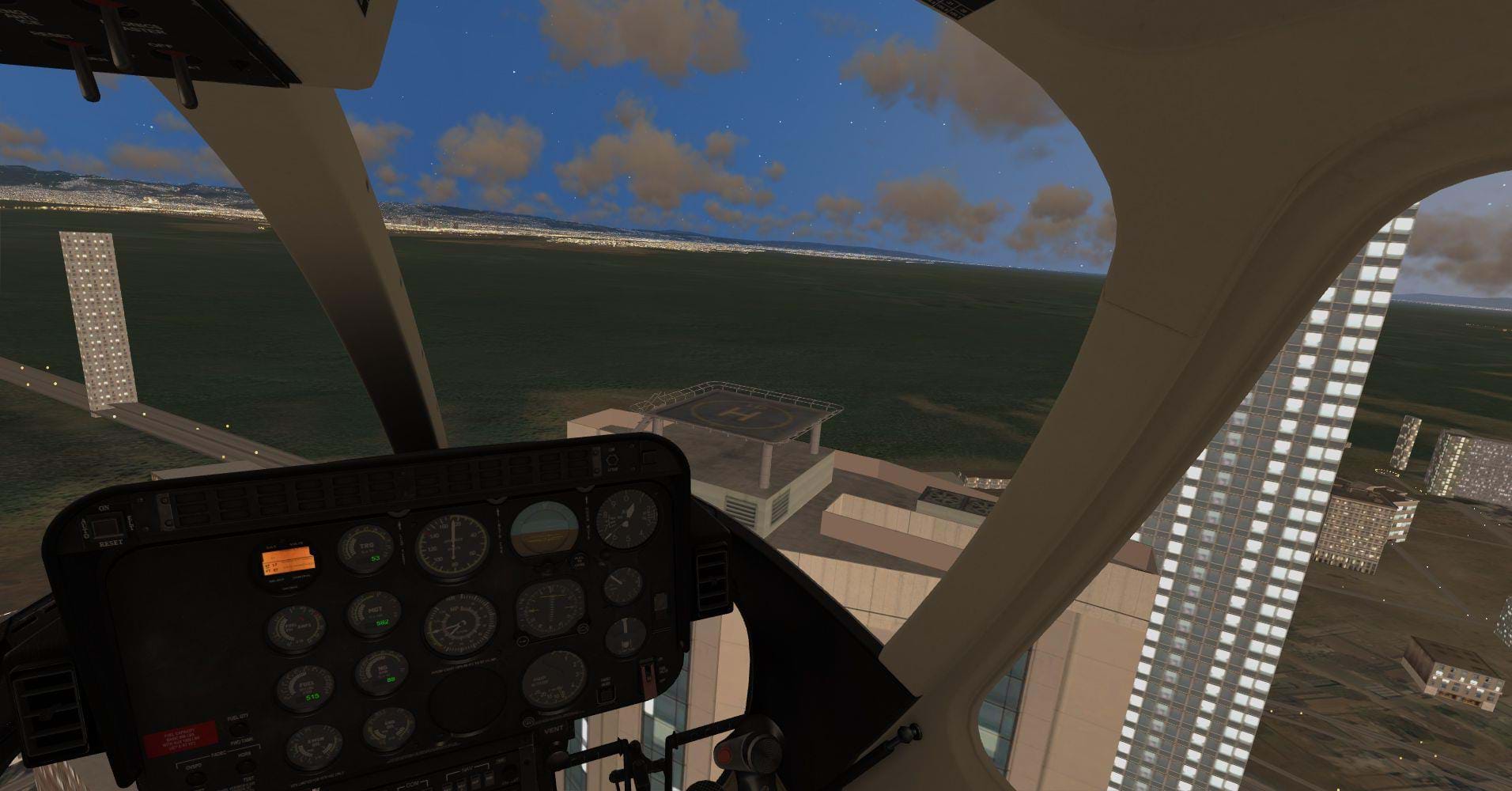 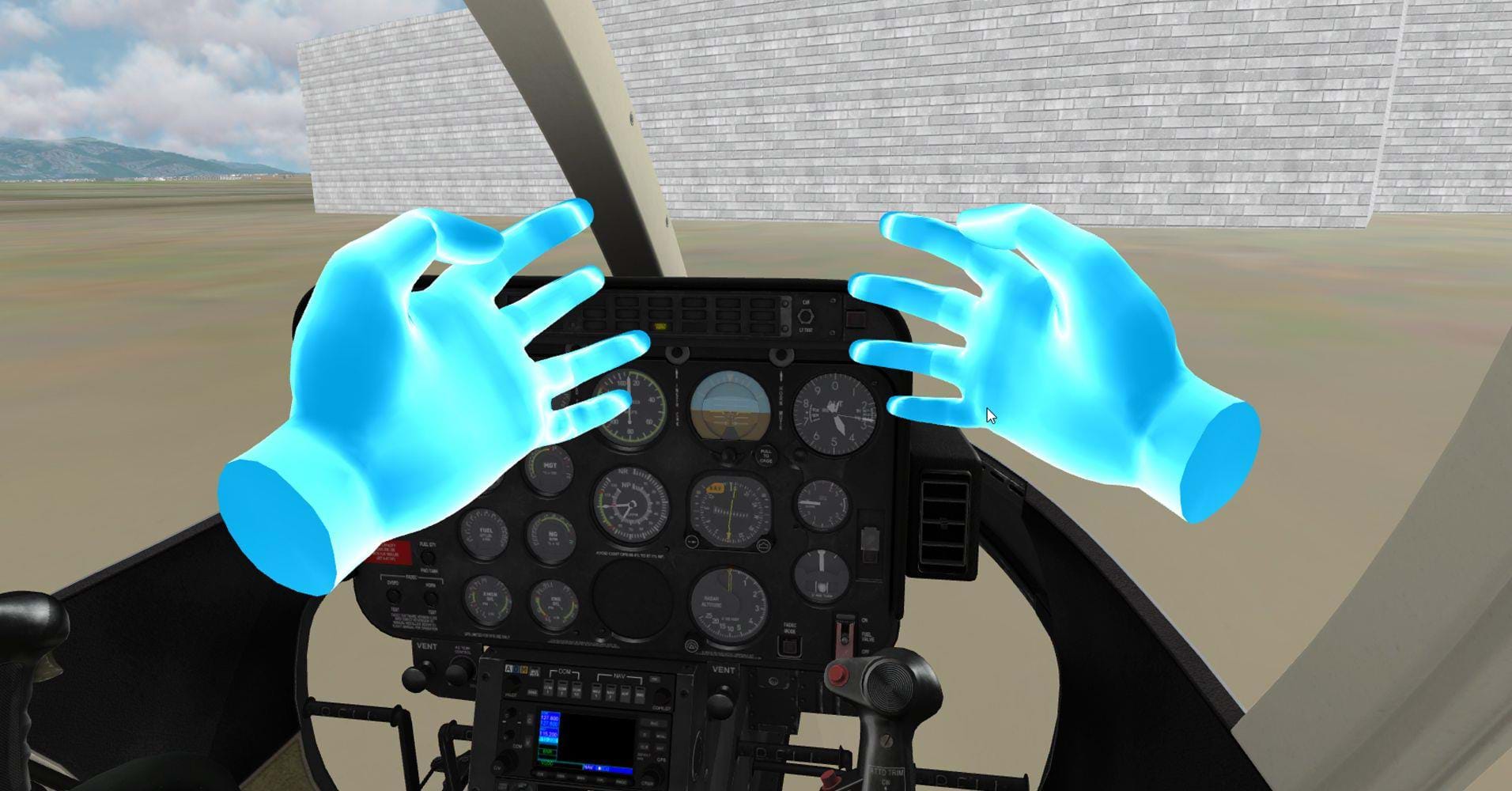 The good news is that FlyInside Flight Simulator supports things such as Leap Motion right out of the bat but.

The bad news is that I‘ve had some trouble using it as, as soon as I visualized my hands, they would just freeze and stay there. I couldn’t use Leap Motion and, eventually gave up on trying it out.

FlyInside Flight Simulator comes with 10 aircraft (although there were 13 on my list but 3 of them were repeated – remember, this is not a final version, so you will find issues and bugs for sure).

9 out of those 10 aircraft are Milviz creations with the last one (a 717) belonging to TFDi design. Clearly, FlyInside wanted to focus on other areas, so this might have been a good tactic: outsource the aircraft from companies that already do a good job with them.

On this version you’ll be able to fly the following:

As well as the helicopters mentioned on the next section. This makes it for a quite nice, and varied selection of flying machines for you to try out.

Tell me about the good stuff: helicopters! 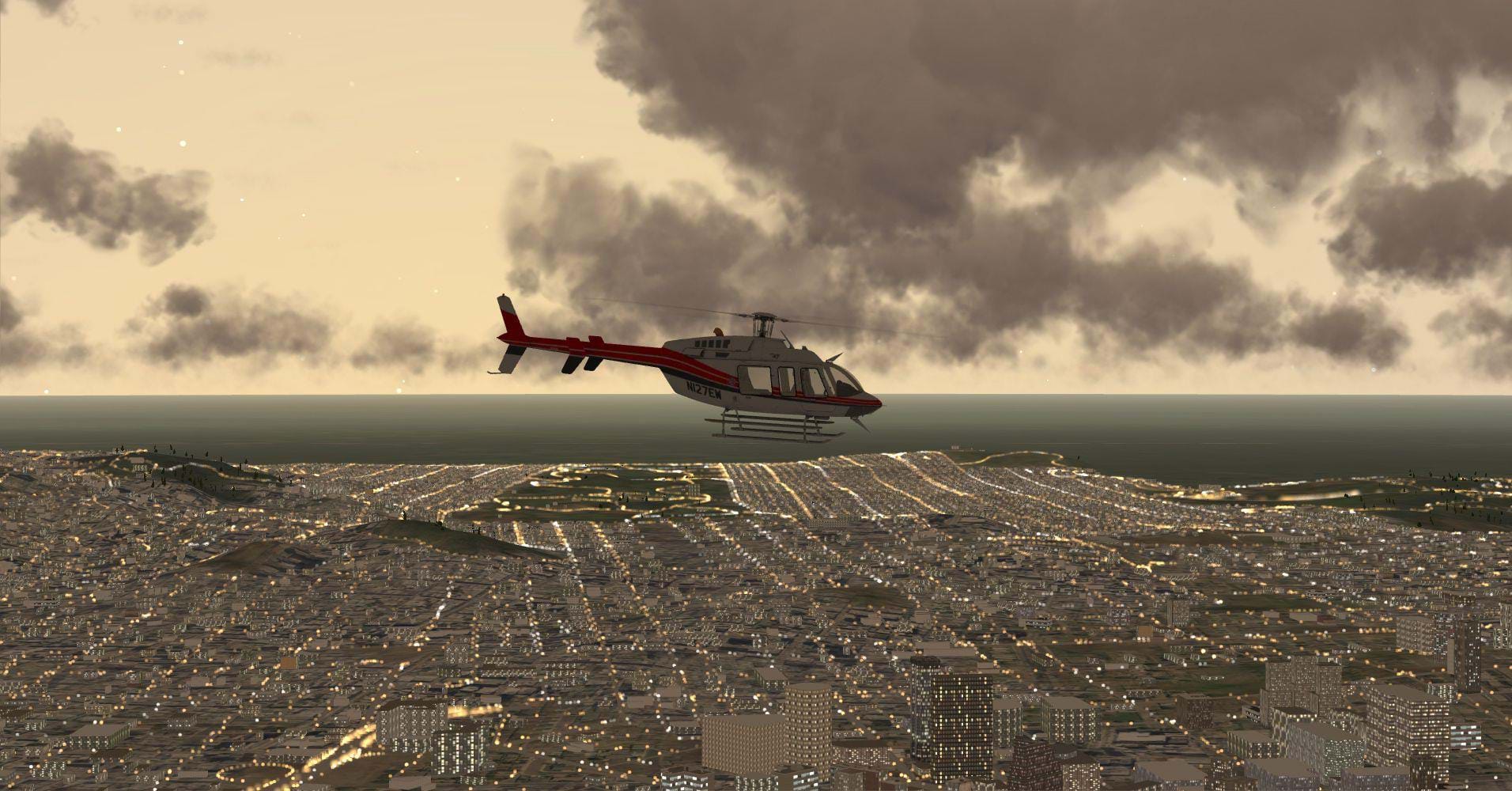 And here’s where it starts to get interesting, right? Right!

We should be used to it right now and you will probably hear this a lot whenever a new sim comes out, but helicopters are not exactly the priority when it comes to the development of these types of software – unless it’s a specific helicopter sim.

Yes, the folks at FlyInside were kind enough to add 3 helicopters already (which is more than some sims do for us – check out X-Plane with the… less-than-perfect S-76 and Aerofly AFS2 doesn’t even have its R22 out yet). But the flight model is not there yet.

It does feel better than the one FSX/P3D comes with by default, in the sense that the helicopters are much responsive. They are not sluggish at all and you need to take some care while flying them. But once they gain forward speed, they are very, very stable, unless you move the cyclic a lot (even with no null zones).

There’s a change of vertical lift as you move the cyclic – as one would expect – but things like translational lift or in-ground-effect are not present. Gain some speed from zero and your rate if climb stays the same through the whole operation (unless you move the cyclic or collective, of course). 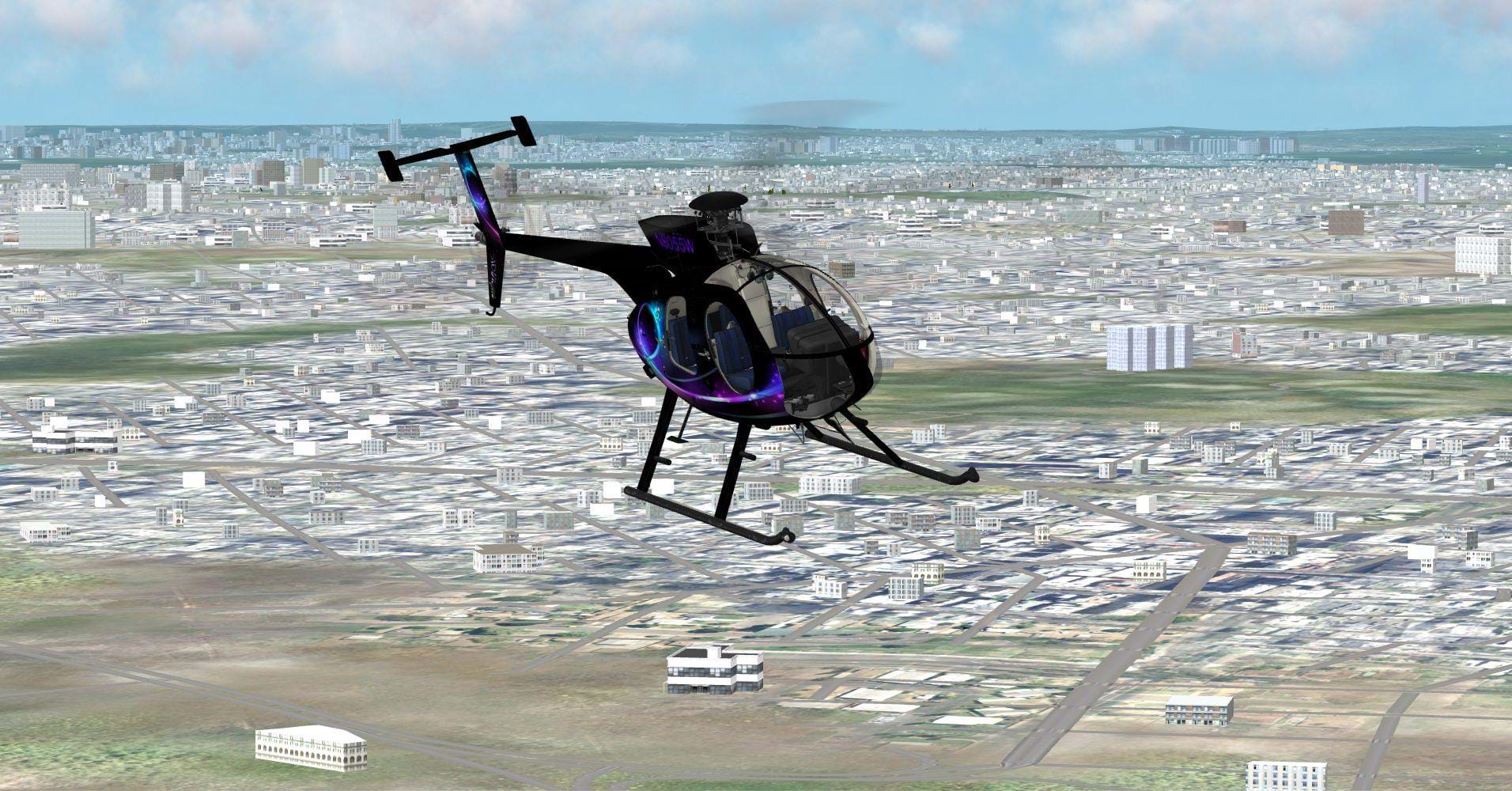 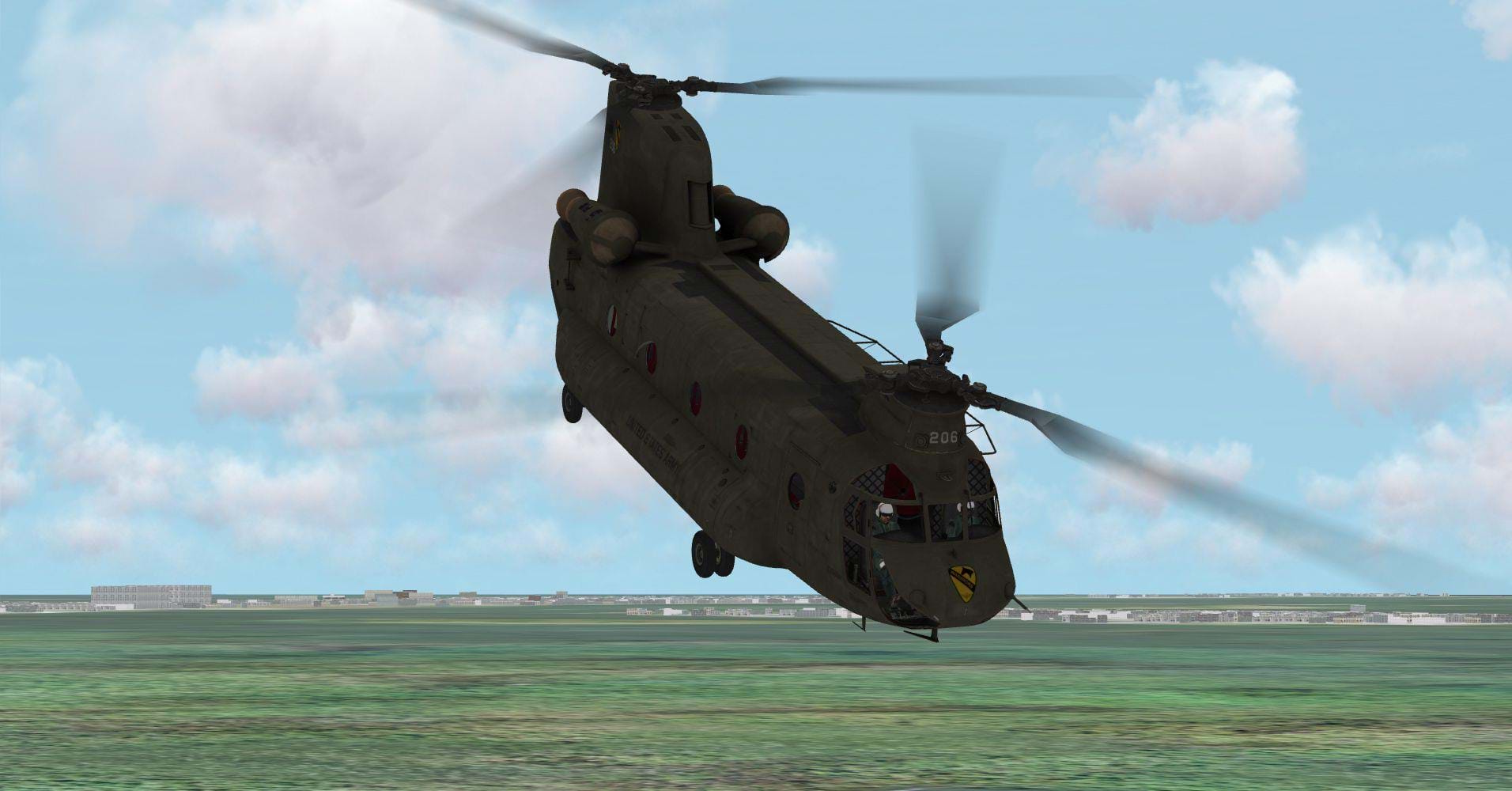 Get off the ground and your lift remains the same as well.

FlyInside told me they are planning on getting the flight dynamics right. They told me they want to add “ETL, VRS, auto-rotations, over-torque, etc.” and, when the time comes, they will be counting on our community to help them out.

Until then, though, you can fly around but don’t expect a great FDE for helicopters.

One of the things I noticed is that the B-407 has some torque which forces you to use left pedal. I couldn’t feel it – at least not in the same amount as with the 407 – on the 530 but it’s good to know that, at least, something’s in there already.

Flying around with any of the 3 helicopters was nice. Again, VR works pretty well and MilViz has done a great job at modelling these aircraft which are already veterans in the ESP (FSX/P3D) platform. 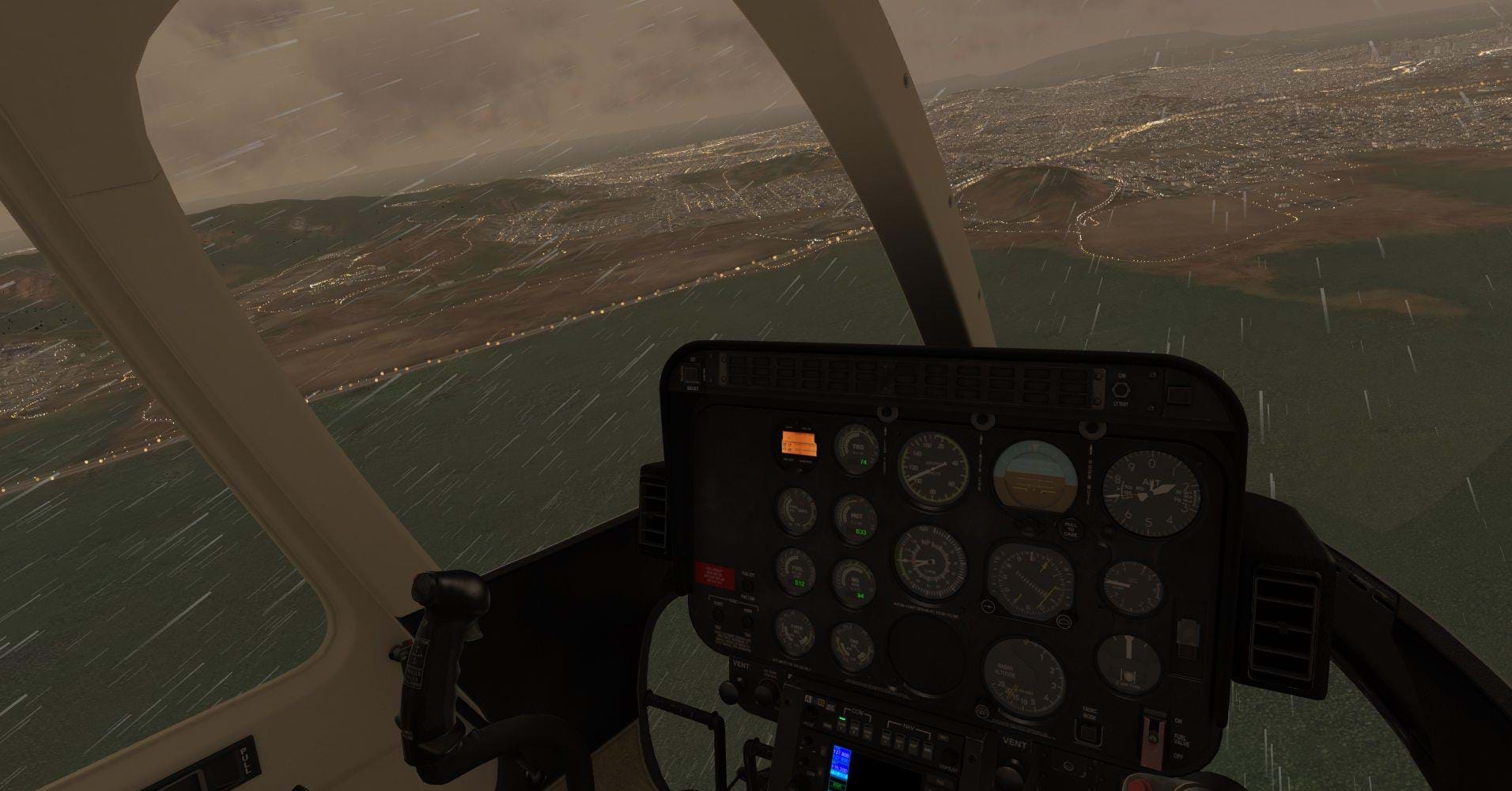 I believe FlyInside Flight Simulator is the product of the need FlyInside had to bring something else to the community, apart from the addons.

They seem very passionate about the sim (I don’t know of a simmer who wouldn’t if they had the chance of working on something like this) and very truthful regarding their intentions to make a nice product.

Right now, it’s an early access version. A not-very polished one, in my opinion and the UI could use some work.

There will be bugs and issues (such as going underground, for example, as you can see below) and you won’t find a lot of what you are used to on other finished sims. 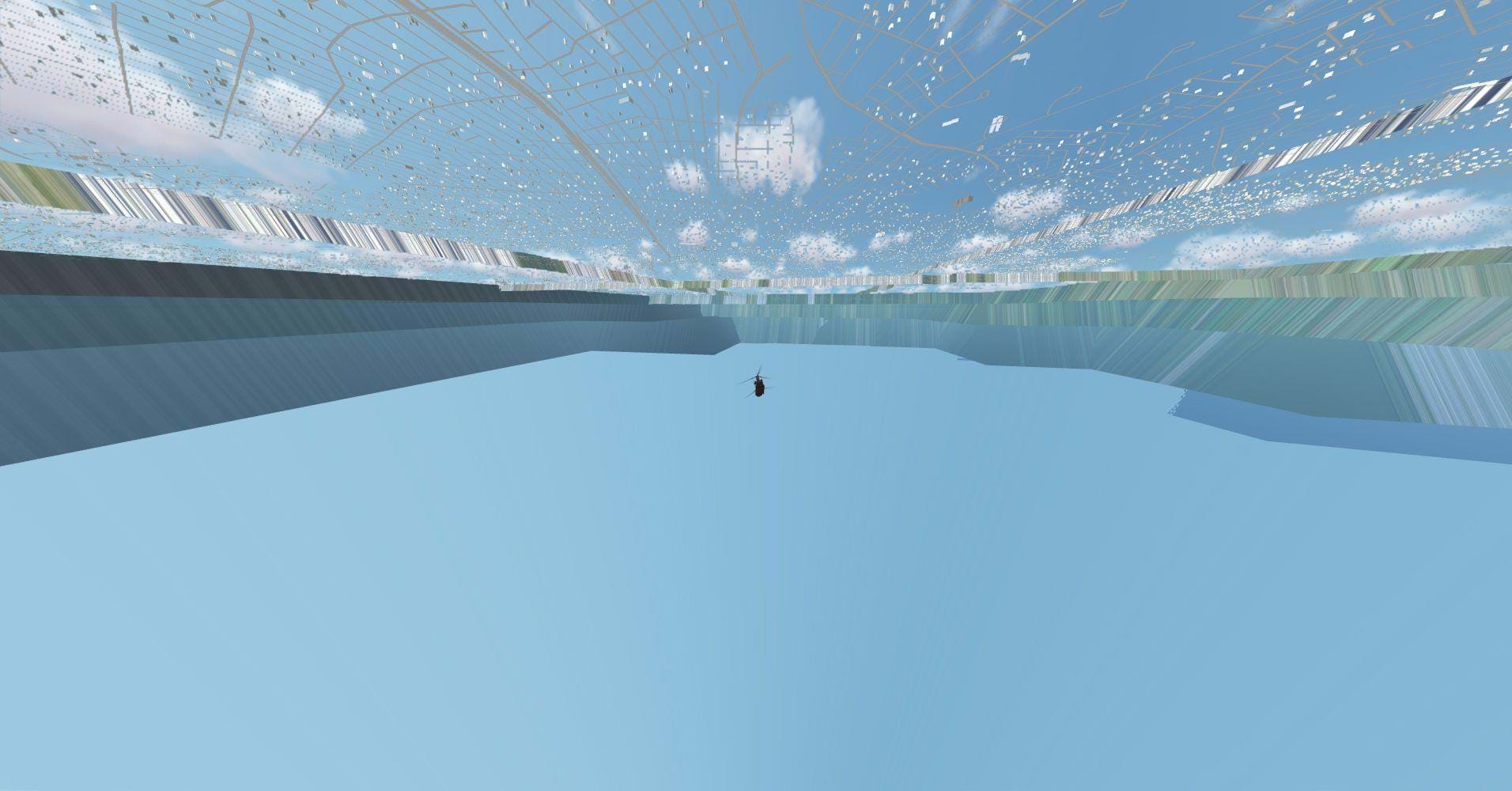 The fact that the team’s using aircraft developed by other companies is, in my opinion, a good strategy as it removes the need to have resources/people allocated to this area but, in my perspective, FlyInside has a very, very long path to walk until the community looks at them as an alternative to the sims that are out there.

Frankly, being a “VR-first” sim will not, automatically, make it a better sim. A lot of folks still don’t use VR and the ones that do are adapting to the needs of the new sims.

With the update of game engines to Vulkan (IPACS already did that on AFS2 and Laminar Research has been working on it for some time), as well as the evolution of graphic cards and CPUs, I think FlyInside will have to put a lot more on the table for the simmers out there.

It’s very hard to get a simmer to spend more time and money on a new sim. It’s one thing for someone to use P3D or X-Plane and purchase DCS, for example (being a different and combat sim) but it’s a whole different thing to get a P3D user to switch to X-Plane or vice-versa or even look at a new sim.

My concern though is that, as a community, we do the same we did to FSW and kill it.

But we cannot just bash them or disregard them because they are not our favorite sim.

X-Plane was not my favorite sim for over 20 years. Nonetheless, right now, it’s what provides everything I want as a simmer. Who knows if, with time, a good strategy and our support, FlyInside might not be my future sim of choice.

So, should I get it?

Look, you have a free trial available. You don’t need to ”get it” but you can, at least, give it a try. That’s the kind of question that doesn’t require an answer.

Where to get FlyInside Flight Simulator

You can get the free trial here and purchase it here.

FlyInside is working on their helicopter flight model