No, HPG didn’t release a new model, but from what they have recently released, it might as well be. 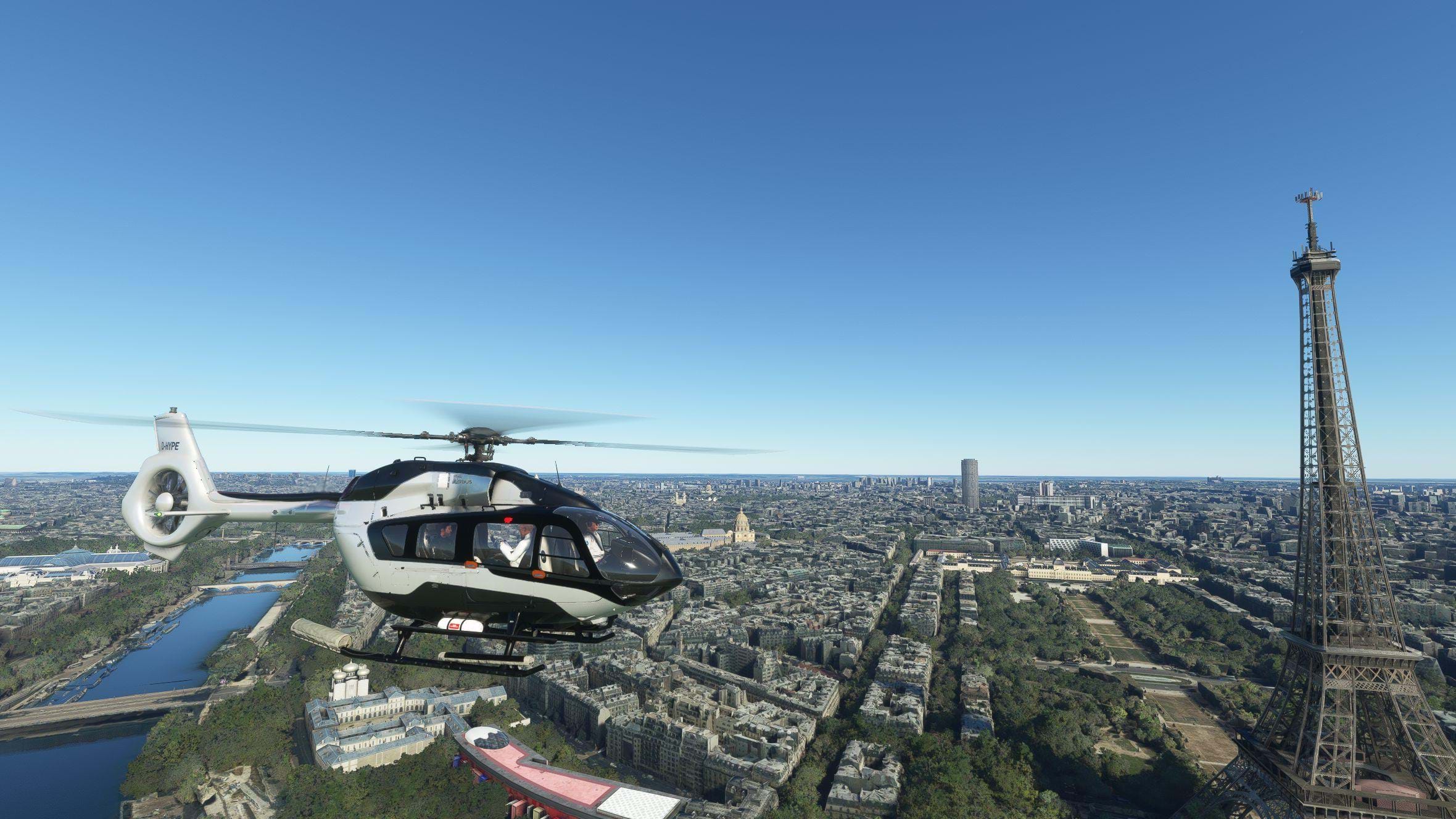 Let me start with the same sentence I used in a recent post I made on our Helicopter Flight Simulation group on Facebook.

If you have asked me about the Hype Performance Group H145, you know that I haven't been particularly enthusiastic about it.

I also want to do the following disclaimer: this is not a review but rather an update on the project. I will be saving a review for a later stage, probably when the helicopter reaches the final version.

I have reviewed their previously (freeware) H135 and, despite the amazing work they had in adding a helicopter(ish) to Microsoft Flight Simulator, it didn’t do it for me.

A year ago, the H145 came out and you may or may not have noticed I didn’t write a review on it. I had spoken about the 135 and the 145 was in its early stages. It seemed to me like I would probably be beating the dead horse and saying the same things over and over. 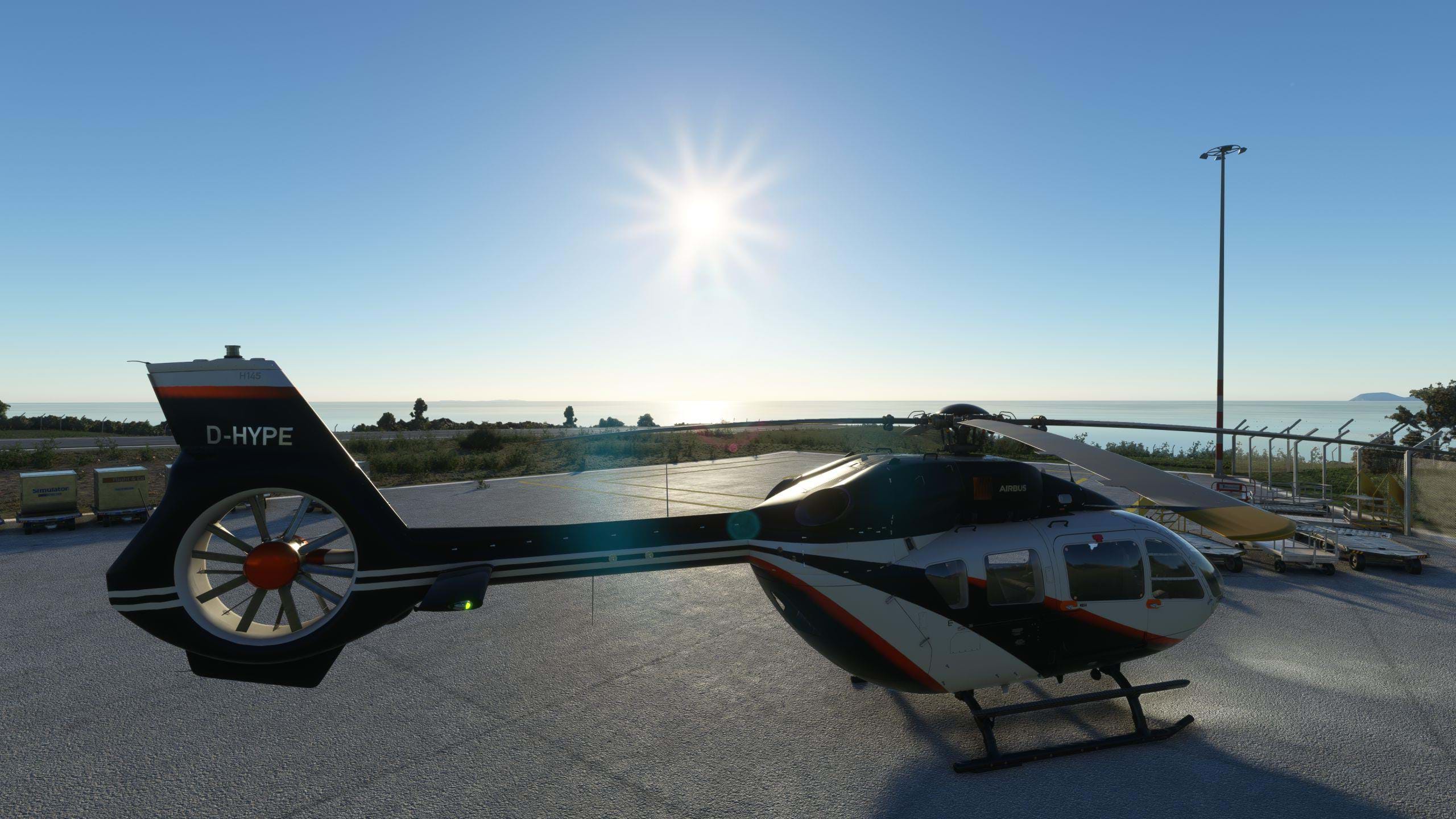 Once again, the flight model felt weird. It felt too stable. For lack of a better term, it felt like it was “on rails”. If you have the H135, or an earlier build of the H145 do the test yourself. The best way of checking it out is by using the anti-torque pedals.

Turn left or right and then center the pedals. You will notice the helicopter speeds up and down pretty fast. It’s binary. Full speed or full stopped. There is no inertia. It felt stale.

And perhaps because of that stability – and the fact that there were no other helicopters to enjoy the amazing scenery – the HPG H145 grew a lot in popularity. 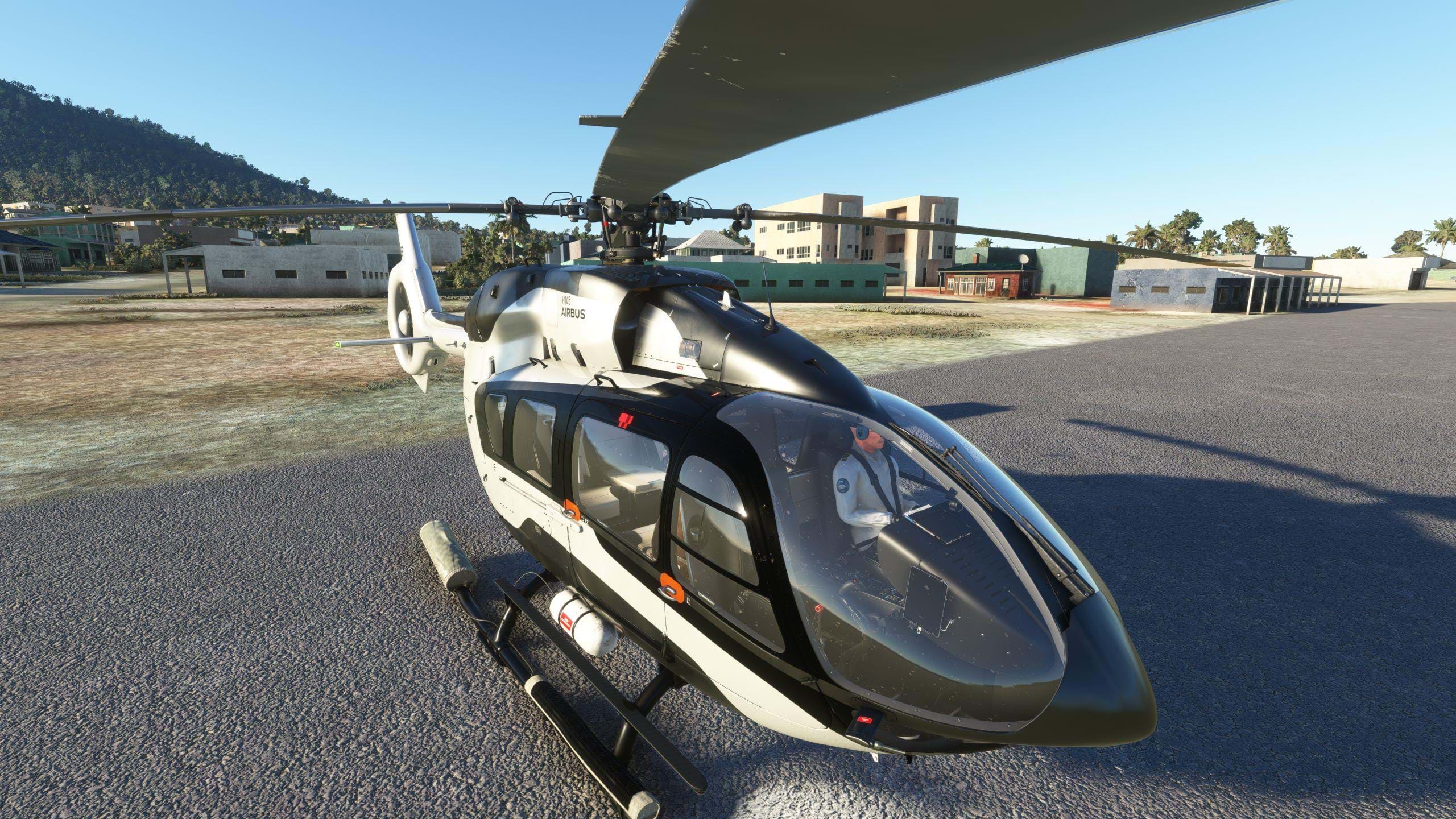 HPG had a beautiful model, complex systems, a lot of great features and the team is quite accessible.

But, for me, for what I want in a helicopter, the H145 just didn’t do it. All that stability actually threw me off big time as I couldn’t predict the behavior of the helicopter. It was as if it didn’t follow the laws of physics.

I ended up spending more time on the RotorSim Pilot R44 than on the H145. Heck, I didn’t even touch the H145 except to try some builds now and then. But back to the R44 I went.

A couple of days ago or so, Steve of HPG messaged me and told me they had a new build available with a lot of work been done on the flight model, added inertia and a few other things.

Oh boy. I was in for quite the treat.

The rebirth of the HPG H145

I could feel the difference in the flight dynamics as soon as I started pulling the collective up.

The helicopter felt more alive, a bit quirkier. I immediately sit a bit straighter in the chair. The 145 got my attention as it was ready to come out and play.

I pulled the collective a bit more and it wanted to tilt. I got it straight and picked her up. “This is not the same H145”, I thought.

I pushed the cyclic to gain some speed and then decelerated to stop. WOW! Was that inertia? I tried it again. Same result. I did a pedal turn and centered the pedals and the helicopter was no longer responding in binary. 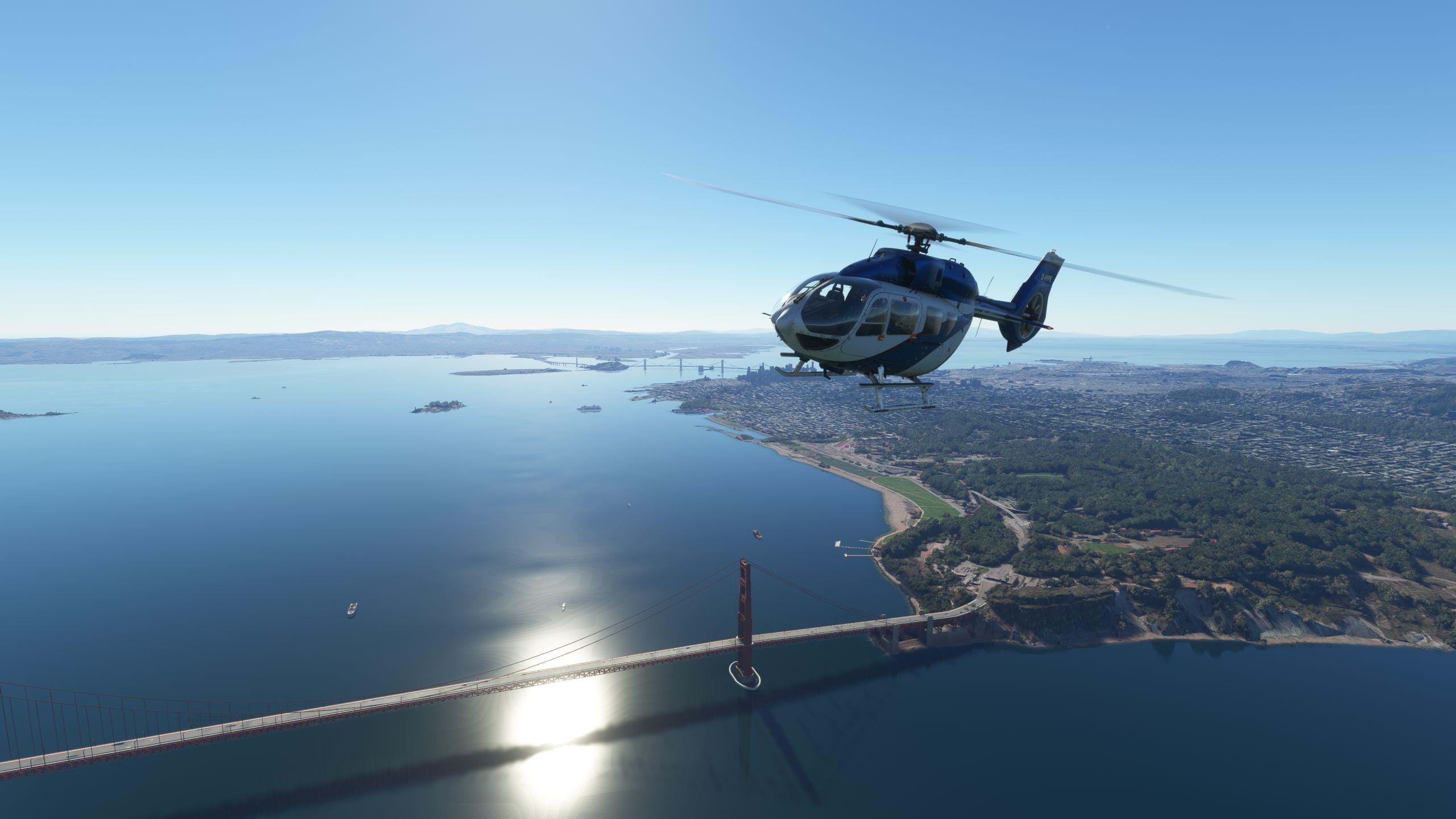 It was no longer on or off. No longer all in or all out.

I pulled the cyclic side to side and the helicopter behaved a lot like a pendulum. It was so much different from the earlier versions of the H145. It felt like a completely different helicopter altogether.

I took her for a quick spin, flew some patterns, a lot of slow flying around the airfield and I could predict the behavior a lot more.

Here’s something funny: you would probably expect a stable/linear flight model to be easier to control and more predictable. Being so used to flying helicopters in sims, it was the opposite for me. The stability made it unpredictable for me. I expected the helicopter to behave like a body moving through the air and that wasn’t happening.

But with this new version, it does. 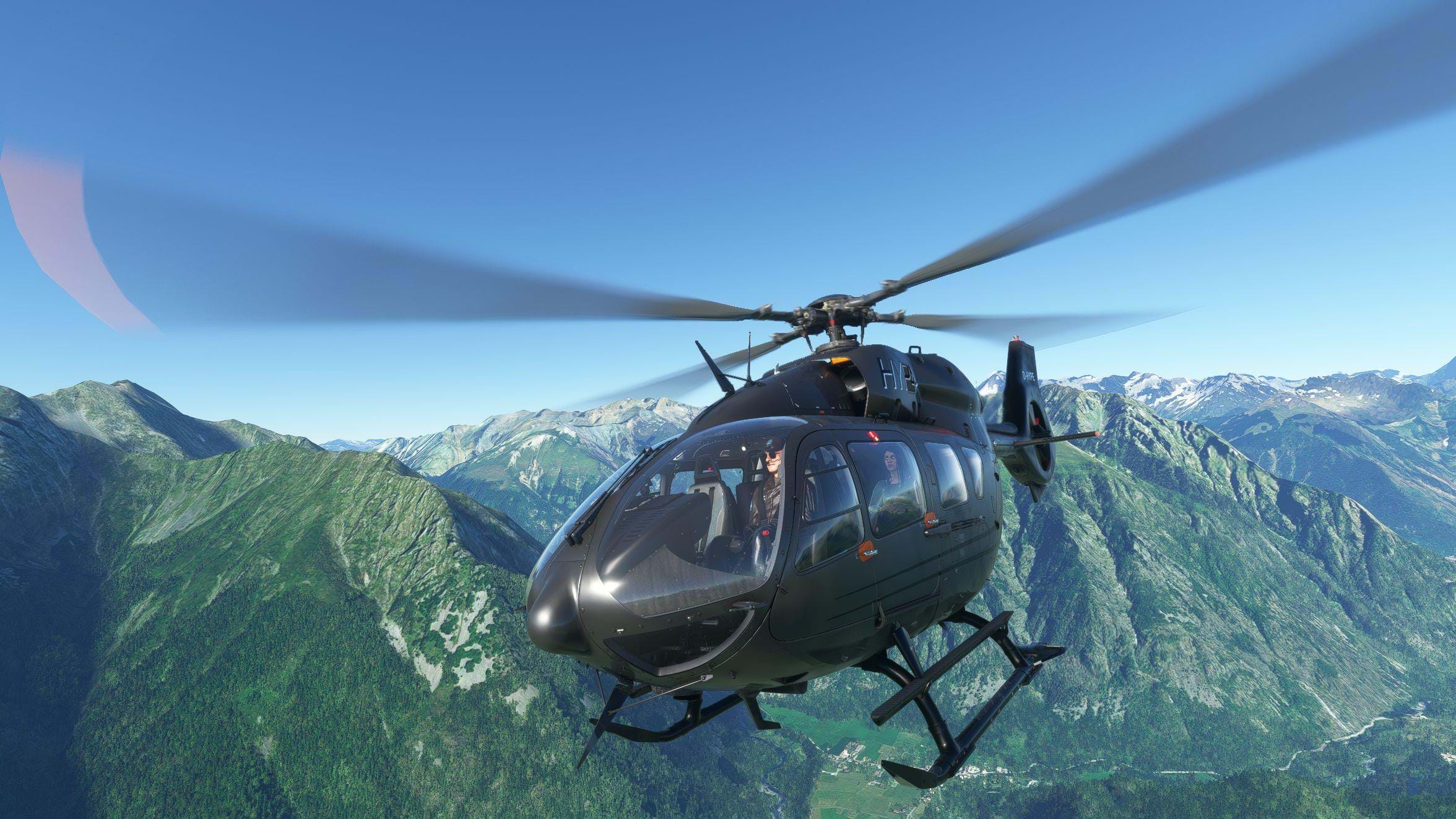 The Hype Performance Group now reached a point of maturity that allows me to enjoy the helicopter and the flight model.

It finally behaves more like a helicopter. The latest update completely transforms the H145 and makes it a much more valid candidate for me to put some flight time into it.

In case you didn’t get the latest update, you should probably have gotten an email from the team with a link to download it. Go get it and check it out. It makes a world of difference.

If you don’t have it yet, you can purchase it at the Hype Performance Group website.