Flying online is great but only if we follow certain (spoken or unspoken) rules that will help us keep everything fun for everyone. 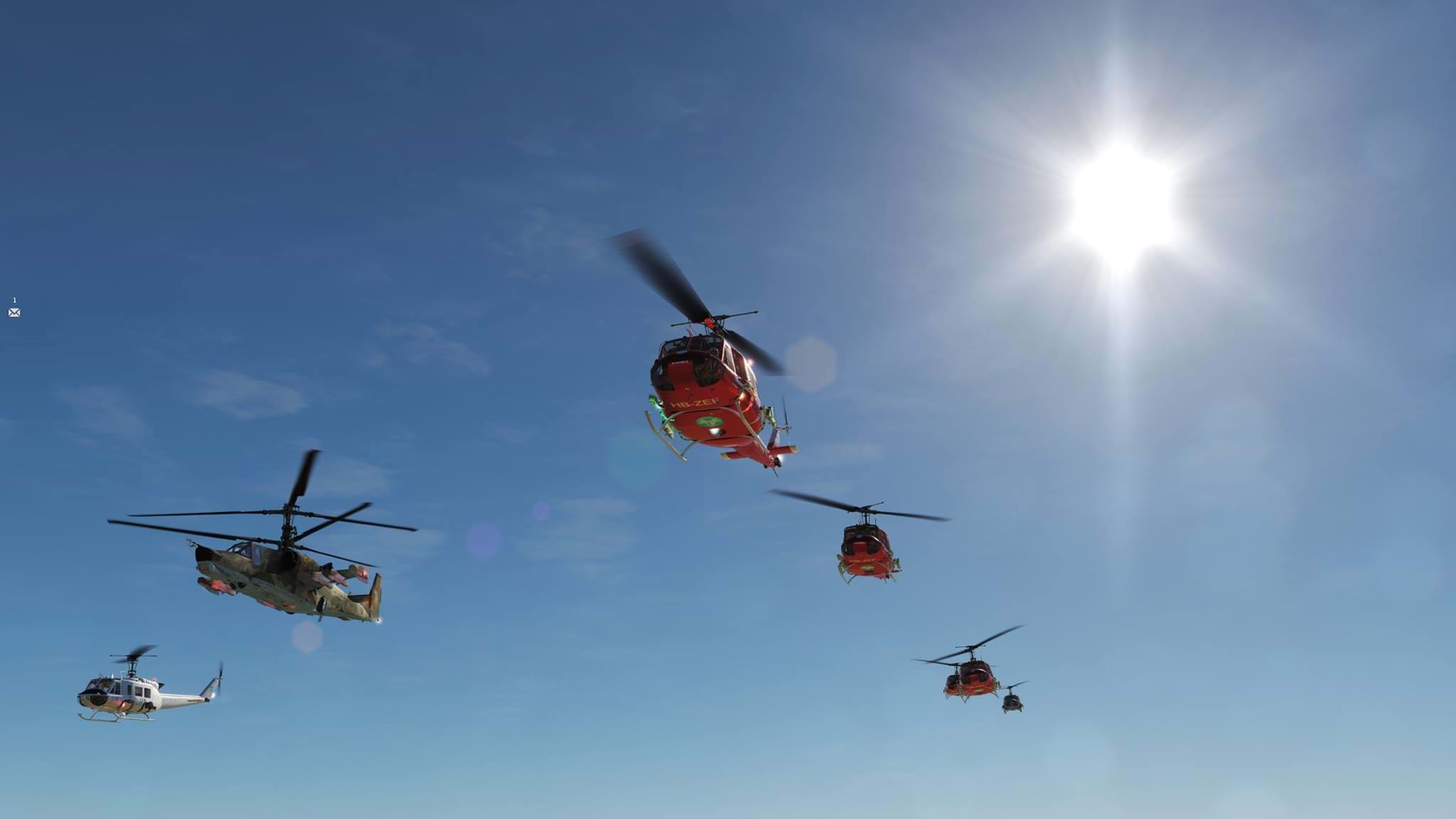 Greetings fellow helicopter enthusiasts! Hopefully our past articles on flying online and using communications in flight simulators has been put to good use and a few of you have been able to hop online and start chatting to fellow sling-wing folks.

While those articles were good starters, I’m going to dip into a more sticky matter here: online flying etiquette. I know (most) of us can remember back when we were kids. We would go visit the extended family, Grandparents, cousins, or even accompany parents to social events hosted by their respective careers.

Before each of these events, I always got the talk: “Make sure to chew with your mouth closed, don’t put your elbows on the table. Always rise when a lady is coming or going to the table,” invariably, I would chip in, “But Dad, does cousin Becky count as a lady? She’s just a girl and only earlier we were chucking pine cones at squirrels,” My Dad would look at me with a scowl, “Yes, even your cousin Rebecca you knucklehead.”

So, it was always with great trepidation when she would arrive during Thanksgiving dinner at Grandma’s (and no end of giggling on her part) that I would awkwardly set my fork down and half fall over myself when she would get there. Later, while climbing our Grandma’s giant Oak out back, she would invariably ask, “What was with you standing up when we got to dinner? You looked like a dork.” I would shrug and make sure to kick some bark off the branch in her direction, “I have no idea, something about you being a girl.”

Although, it wasn’t until I was much older, while courting girls and later, my career, placed me in a position to attend formal dine-in’s and events that I would silently thank my Pops for those starter lessons in etiquette. Military events are usually a formal event, rife with position and rank and every one of those father-son discussions come flooding back to me in a wash of nostalgia.

It comes with little surprise then that there is etiquette in aviation. But what about simulated aviation? Has anyone ever written any rules? Should they? Furthermore, who are “they” and what makes “them” an expert on the matter? 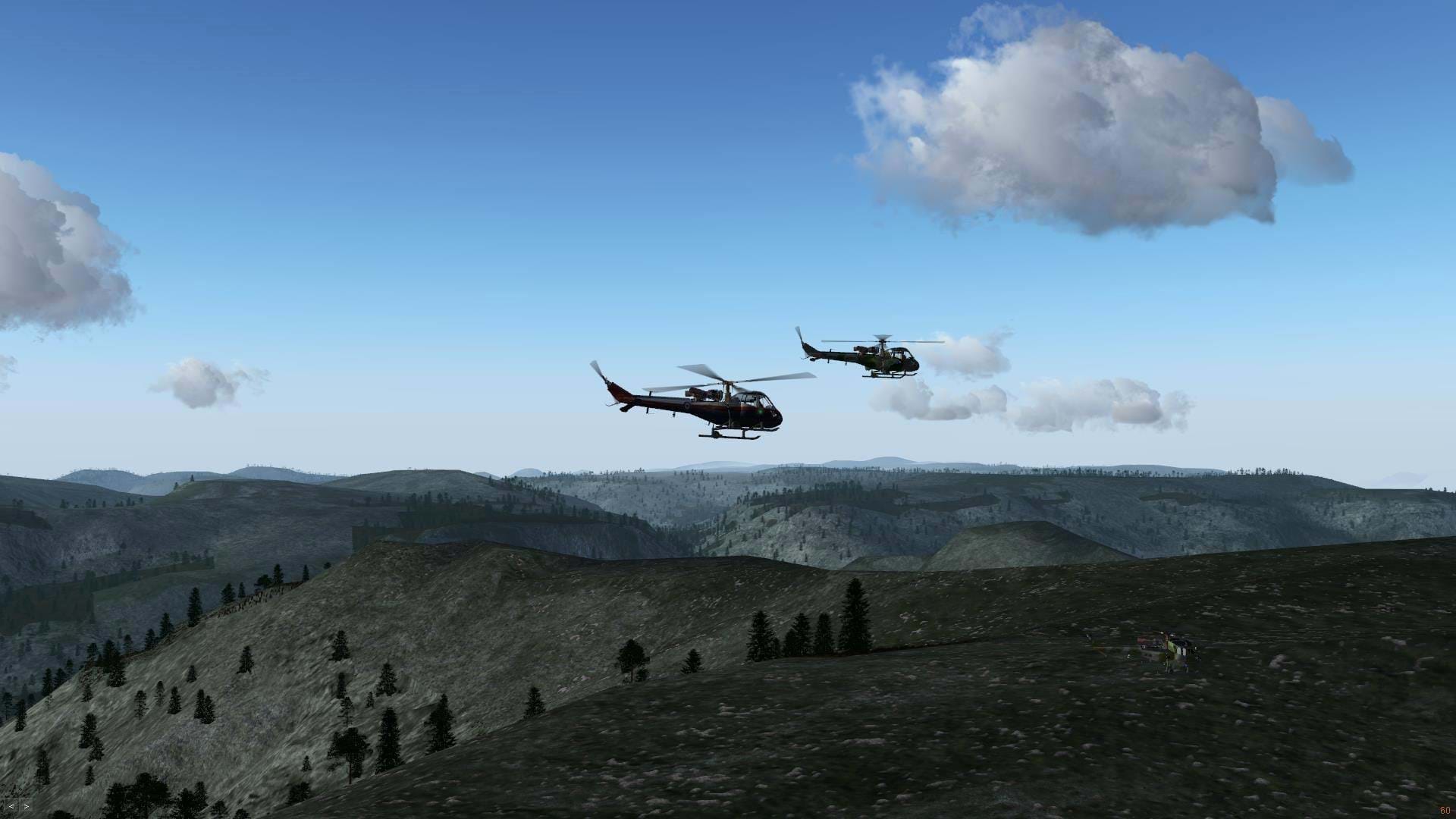 Well, as far as I’ve seen, nobody has published a set of definitive rules for flying online. There have been plenty of suggestions and I know back in the days of FSX multi-player (now Steam) and Digital Combat Simulator, often times, the server owner will post a set of rules or guide lines to abide by. But how many of us actually read these? That last question is rhetorical, please don’t answer that.

In fear of making myself sound like a curmudgeonly stick-in-the-mud, I would strongly encourage most people to review the rules prior to jumping into a server and then doing the best to abide by them. Not because they are the rules and we’re trying to take ourselves too seriously, this is a hobby after all. But potentially, the person whom is the wrath of your spiraling, failed attempt at a Red Bull loop might not be as amused at your smoldering crater that may contain parts or all of his or her digital aircraft as well.

I’m not usually one to flock to multi-player servers to enjoy my spare time. Although, I have a close group of friends who genuinely enjoy the experience so inevitably, I get dragged into the fray with them.

If you’re a DCS fan and you’re reading this and haven’t tried multi-player yet, its an experience I strongly suggest. There is a wonderful feeling of accomplishment that is achieved when you’re part of taking a goal or an objective and are able to employ a helicopter to do this. But be forewarned, there can also be much frustration.

The other night, one of these fateful friends of mine and I decided to hop onto the Aerobatics Server on DCS. It’s a wonderful little spot that has been running for quite a while. If timed correctly, one can meet a host of colorful and interesting characters and have a blast cruising around in jets or helicopters and challenging each other to eccentric challenges. It’s also a fantastic way to make friends.

Some of the best friends I have now, I’ve met playing on the Aerobatics server. Sadly, the experience can also be immensely frustrating. The other night, I got ran into by an F-15, SU-27 and had another player in an Mi-8 that wanted to have a persistently annoying game of “stare at each other while hovering as close as possible.”.

I didn’t know this other player and hovering in one spot waiting for him to crash into me (which invariably happened) was not my idea of a good time. Especially while my friend and I had an entirely different agenda. I must say, after my third airborne incursion, I started to lose my temper. 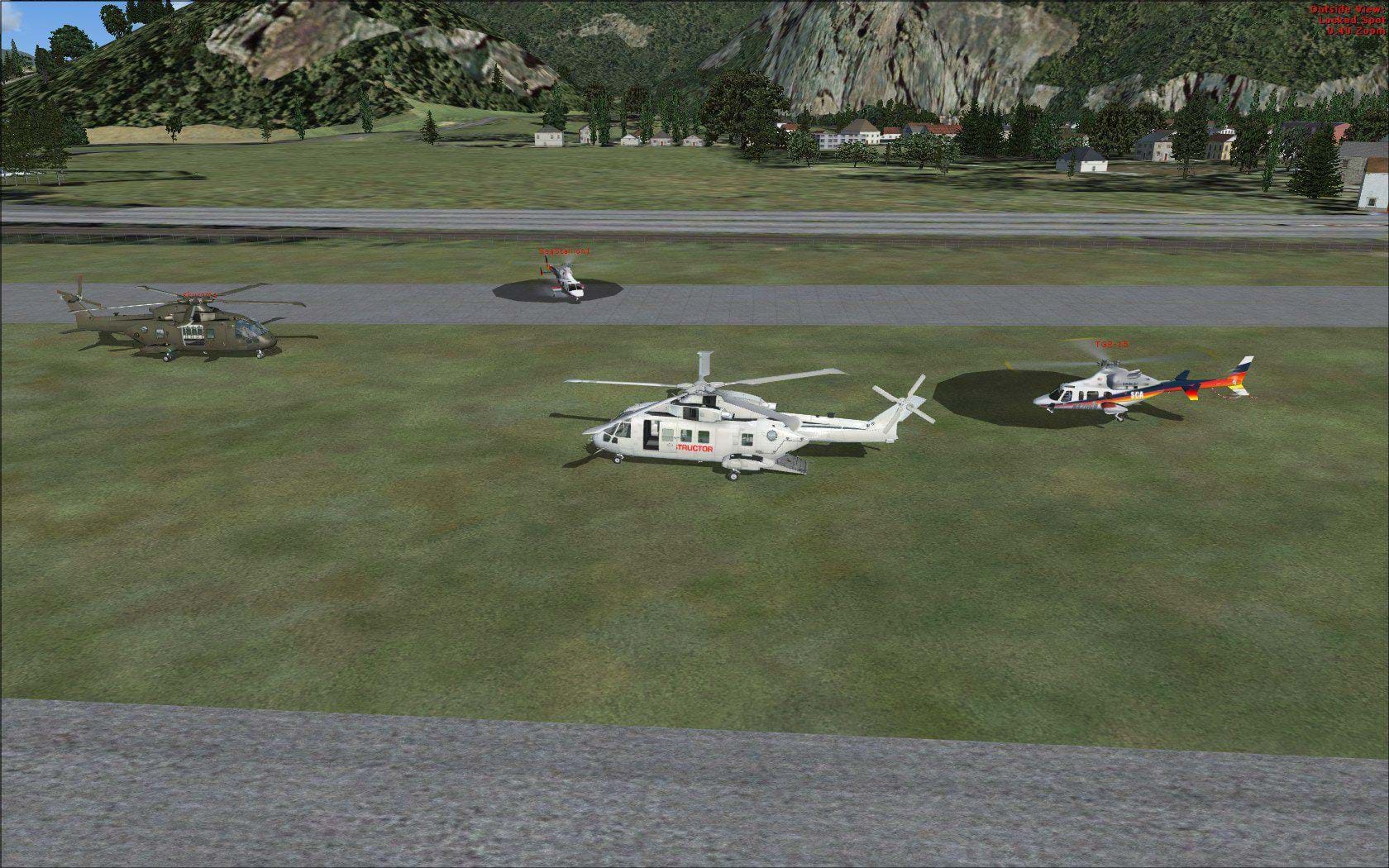 In real flying, airborne incursions are a gravely serious matter, especially in helicopters. Rarely do airborne love taps see either party walking away successfully, and its even more rare in helicopters.

Often, it ends in disaster and the loss of life. The wonders about simulation is we don’t have to worry about aircraft repairs, replacement or that pesky side-affect of aircraft crashes, death. But what if the player whom is the vengeance of our helicopter air show isn’t particularly keen on re-starting a potentially complex aircraft three times in a row?

Rather, our botched attempt at a hammer-head sees the resulting player type a stream of obscenities, quit the server and promise to never come back. Worse yet, maybe it forms a negative-habit transfer to all simulated-helicopter pilots?

Sucks for us, right? Sad, we lose another fixed-wing pilot. Actually, it is. Most of the good multi-player missions available on DCS require team work. The fighter-jocks screaming around at Mach 1 chasing MIG’s have their role to play as well as the helicopters thumping around down on the tree line.

The jets provide Combat Air Patrol (CAP) or Close Air Support (CAS) for the helicopters so we can swoop in, emplace friendly troops or armor to hold an objective. Although we, helicopters, don’t have that fast mover support, its really easy for those MIG’s to sweep in there and clear us out (usually right at the objective after we’ve flown 15 minutes at 80 knots to get there).

So, what are some things we can do as a community to make sure we can rely on other players when we need them or even just to help sustain an environment of friendly flying?

Some players don’t use voice, don’t really care to take the hobby seriously and can just be lost being brand new players. Invariably, if you’re on a server that has the word “aerobatics” anywhere in the title or description, you’re going to find players who insist that their doing the best air show on earth yet refuse to use any voice or chat communications. 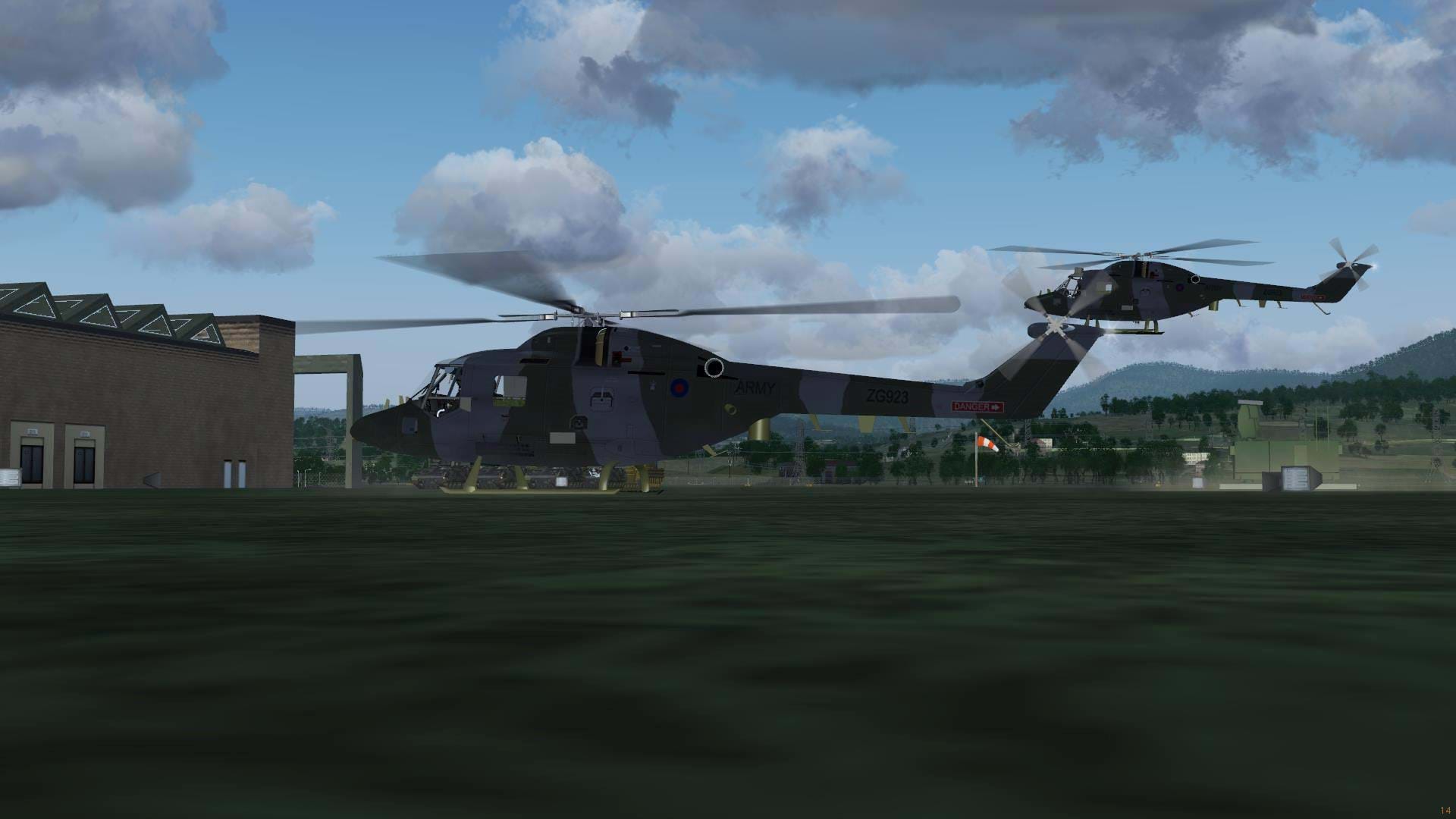 Or worse yet, they only play the Top Gun soundtrack on a loop over the chat channel. If your one of those players, I will find you, I will cut your internet line… Wait, sorry, wrong audience.

We just have to accept sometimes we will run into those people and take it as a risk of flying online. But also, there are plenty of alternatives! Any reader can hop into the HeliSimmer discord and put out an open call to players and then host their own DCS server or any other multi-player enable simulator! It’s a great opportunity for us to get to know each other and potentially a way to get Sérgio to stop yelling at me about not spending enough time in the HeliSimmer discord!

Fly safe, fly neighborly and I’ll see you all later!