It’s not every day that we (common mortals) get to try a motion platform. Fortunately for me, there was one at FlightSimExpo 2019. 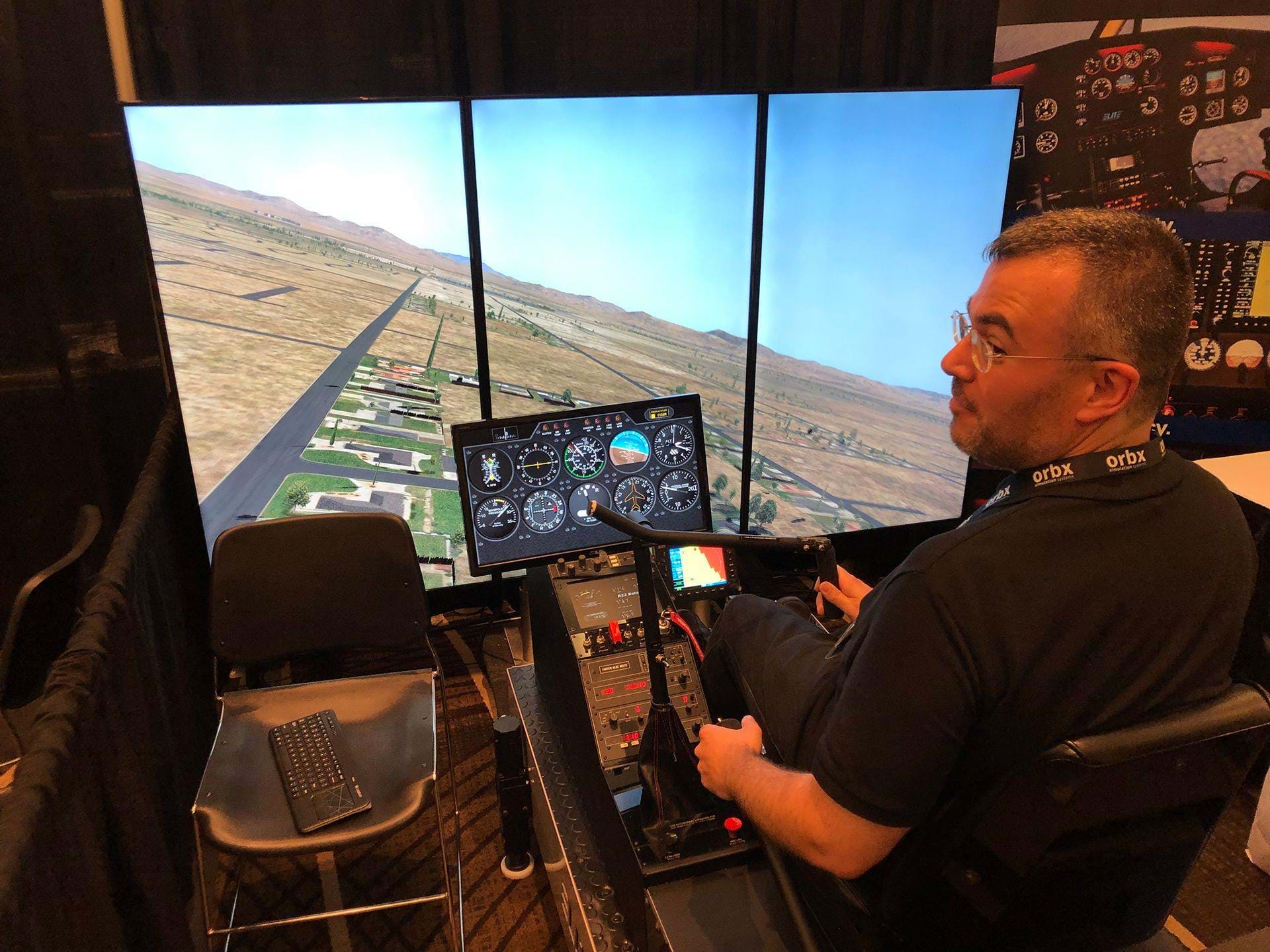 Even cooler than that? Elite invited me to come over and even reserved a time slot so that I (or, in this case, we) could check it out.

So, we did. I grabbed Jeff Klatt (instructor pilot and a fellow member of our Facebook group) and Fred Naar (author of HTR and Airland and student pilot) and off we went to give it a try.

Elite is selling 4 types of products (2 single and 2 dual-pilot, both with and without a motion platform). The one we got to try was the Elite TH22SM, which is the single-pilot, motion platform one.

All the models are FAA approved for real helicopter pilot training, “including credit towards private, instrument, commercial & ATP and Recency of Experience for IFR”.

So yes, make no mistake, this is a professional platform.

The sim it was using was X-Plane and the image system comprised of 3 monitors placed vertically. The instrument panel was built with a single monitor and it also had a small GPS on the side.

The kit simulates an R22, which is still one of the most – perhaps the most used trainer in the world, which makes it a valid and obvious choice.

The platform itself is developed by D-Box and the sim sits on top of it. It has 3-degrees of motion and it’s not exactly a new player in the market, which means the company already has a lot of experience in the field with lots of units being seen on sims worldwide. 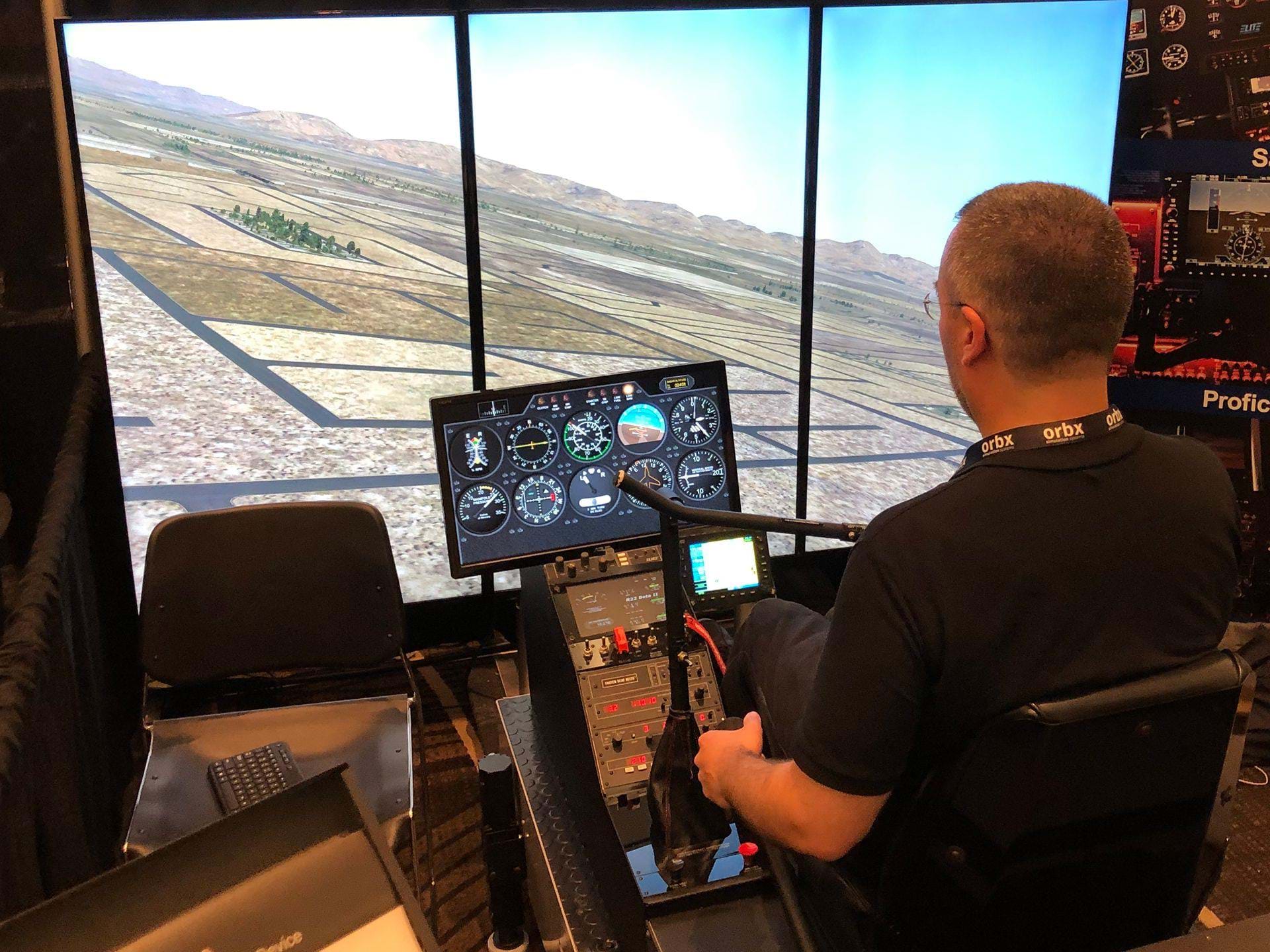 The overall feeling was quite nice, and I had the same feeling I’ve had when I sat on a real R22: that thing is really small. Despite the fact that there’s nothing around you, you do realize the 22 was not built for big people. It feels small, even in sim format.

The seat is adjustable, so I could get myself a bit more comfortable (thanks to Sid Somvanshi, one of the developers of the platform that helped me out with that).

As I flew around and felt used to the platform, I started to do what I always do best: try to break it. Not in a bad sense, but I like to try and feel how things react when you are a bit more drastic.

The platform seemed a bit slow to respond on some of the more abrupt movements I did but I did exaggerate a bit and I kinda diverted from what you could call your regular flight.

I tried some hovering, autorotations and other maneuvers and it always hits me that having some sort of physical sensation is really important. We tend to feel stuff more than see it and it happened on this platform, although there’s something that I felt missing and Jeff pointed it out to me as he asked me to do a maneuver. 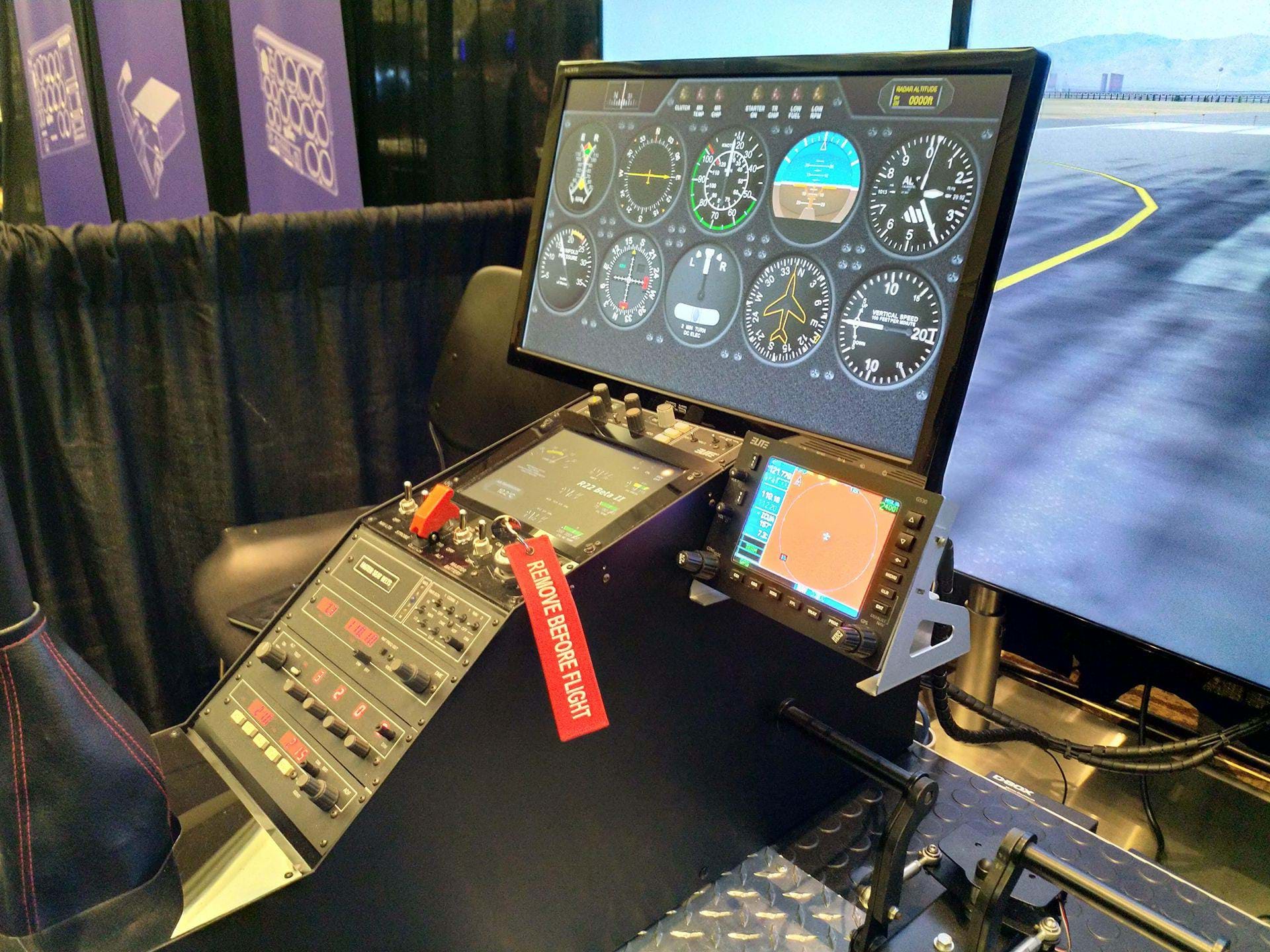 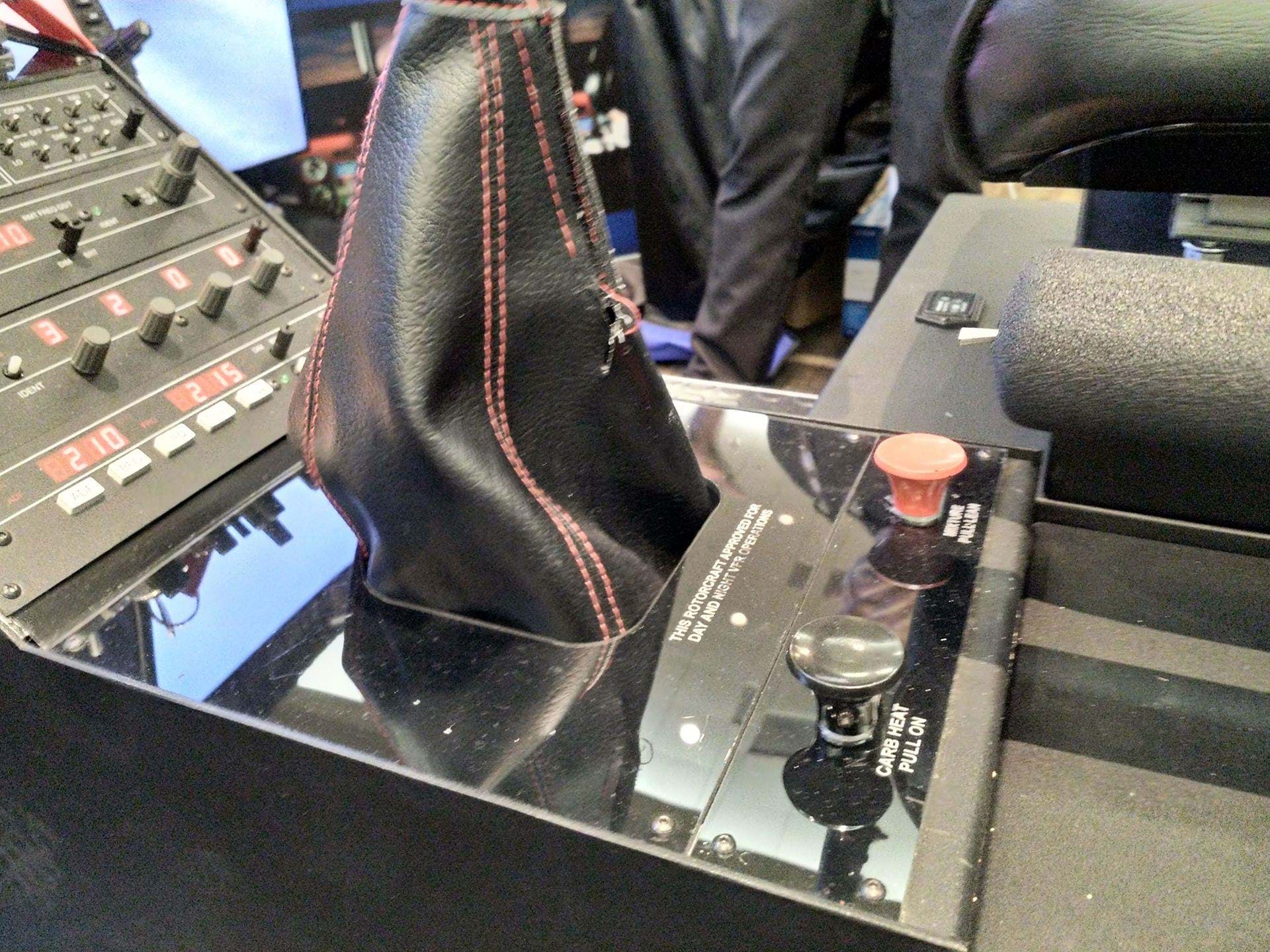 Jeff asked me to fly straight and then push one of the pedals to see the reaction of the platform. There was none. At least not the one we expected. We would expect to feel the platform react to the sudden change on the behavior of the helicopter so that I would feel the lateral force.

But nothing happened. And there’s a reason for that.

After trying the platform, I had a small chat with the team and realized that X-Plane is sending data directly into the D-Box platform. This means that there are no filters, no custom logic in-between, nothing.

What the platform is doing is actually mimicking the roll, pitch and heave (vertical lift), making for the 3-degrees of motion, and that data is coming directly from X-Plane.

Since it’s the actual roll and pitch (let’s forget the heave for now) that’s being used from the sim instead of the forces, flying straight and pushing the pedal generates no motion unless you also move the cyclic (which I didn’t).

We could argue that this is a weak point for the platform, but I don’t see it like that. If forces were to be used instead of roll and pitch, there would be a point in which the platform would not be able to keep on moving in a given direction.

Also, we would definitely reach another point where we would be flying straight in the sim but sideways/rolling to one side because of a previous lateral force.

Regardless of this “limitation” (I wouldn’t call it that, to be honest – the platform does its job, and this is something that hardly anyone could circumvent without a much beefier price tag) I really enjoyed the platform. Fred and Jeff seemed to have a good time as well and I have to thank Jeff for pointing me out how to test, and pinpoint, something that I was missing but I didn’t know what.

After I got what it was, I actually enjoyed the platform even more since it didn’t feel weird to me. I just embraced it for what it is and what it can do. If you do that, you forget these details and focus on getting the most out of it.

There is, of course, an instructor station and Lauren (the person that contacted me to visit the Elite booth) has shown me a bit of what can be done using SimControlX which I already knew of but never actually tried it.

I loved how fast things change in X-Plane as you tap the various options in SimControlX and the coolest thing is: it’s available to the public at the Apple App Store.

Another cool thing? It’s compatible with P3D as well! 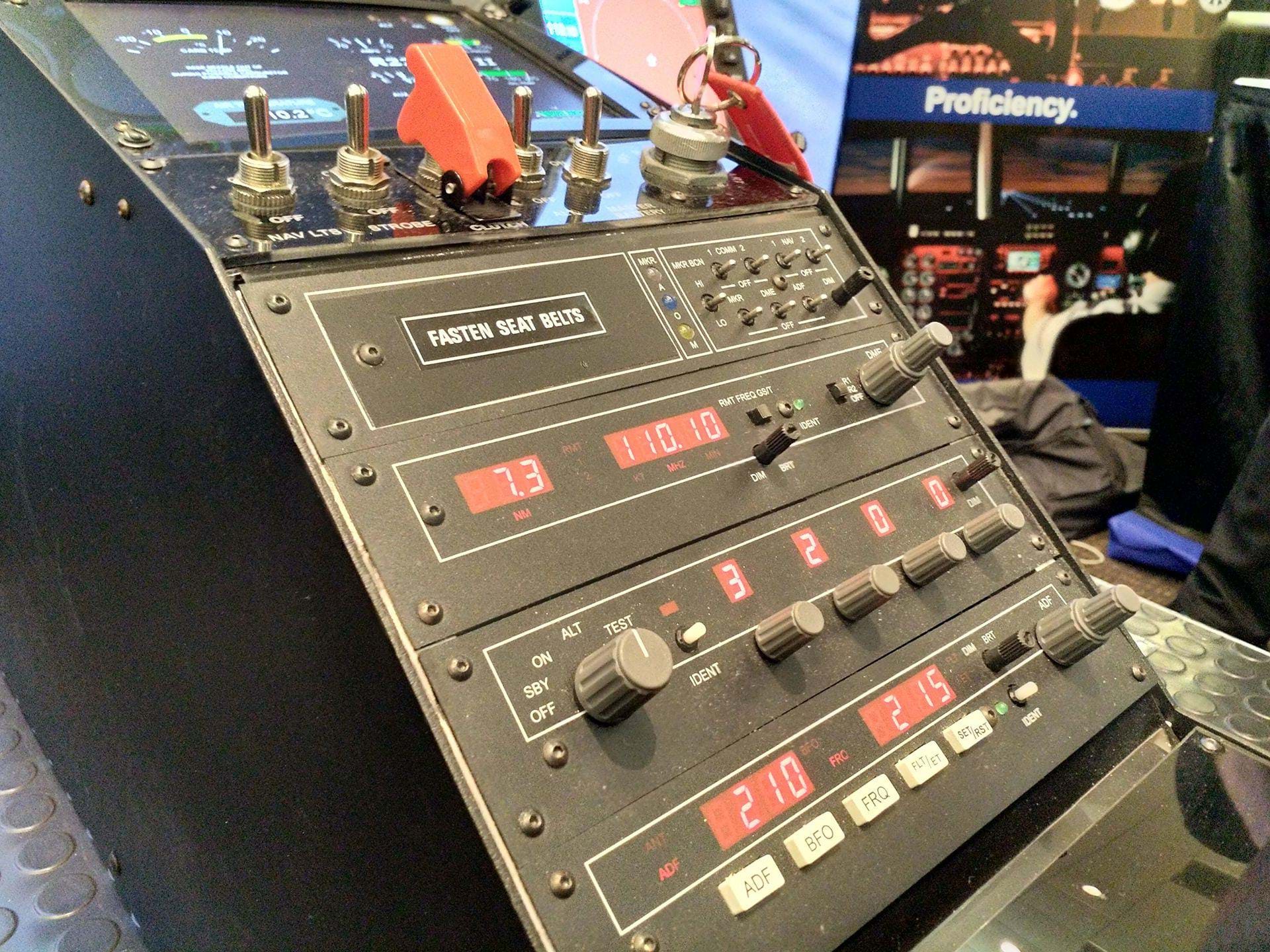 The Elite TH22SM R22 motion simulator is a professional tool. Period. We’re talking of something that costs over $50,000 and was simply not built for the hobbyist.

It’s a serious training device that can help flight schools save a few hours of gas and maintenance as it’s possible to do a few hours on this platform rather than on a real helicopter.

Is it worth it? Well I have no flight school so I couldn’t answer that. In theory, it seems it should.

A flight school won’t obviously replace their helicopters with this system but perhaps, with the right number of students, a bit of risk reduction (less hours flying a real helicopter means there’s less chances of something bad happening – well, same chances but less hours in the air… You know what I mean), less fuel, less maintenance and also the ability to entice kids into trying out a sim and growing the interest for helicopters – which may, in turn, bring you new students in the future make this a rather interesting unit.

As for me, I had a lot of fun trying it out and talking to the team. I have to thank Lauren Brown for her kindness invitation and Sid Somvanshi for explaining some of the stuff and bearing with me as I went a bit more technical. Oh! And Sid is one of our readers! Hey, Sid!

Flight schools and instructors: if you’re looking for a training solution, make sure you check out what Elite has to offer.