VSKYLABS released their second helicopter for X-Plane. The Mini 500 is a kit helicopter that has proven to be very fun – but it can bite you pretty fast. 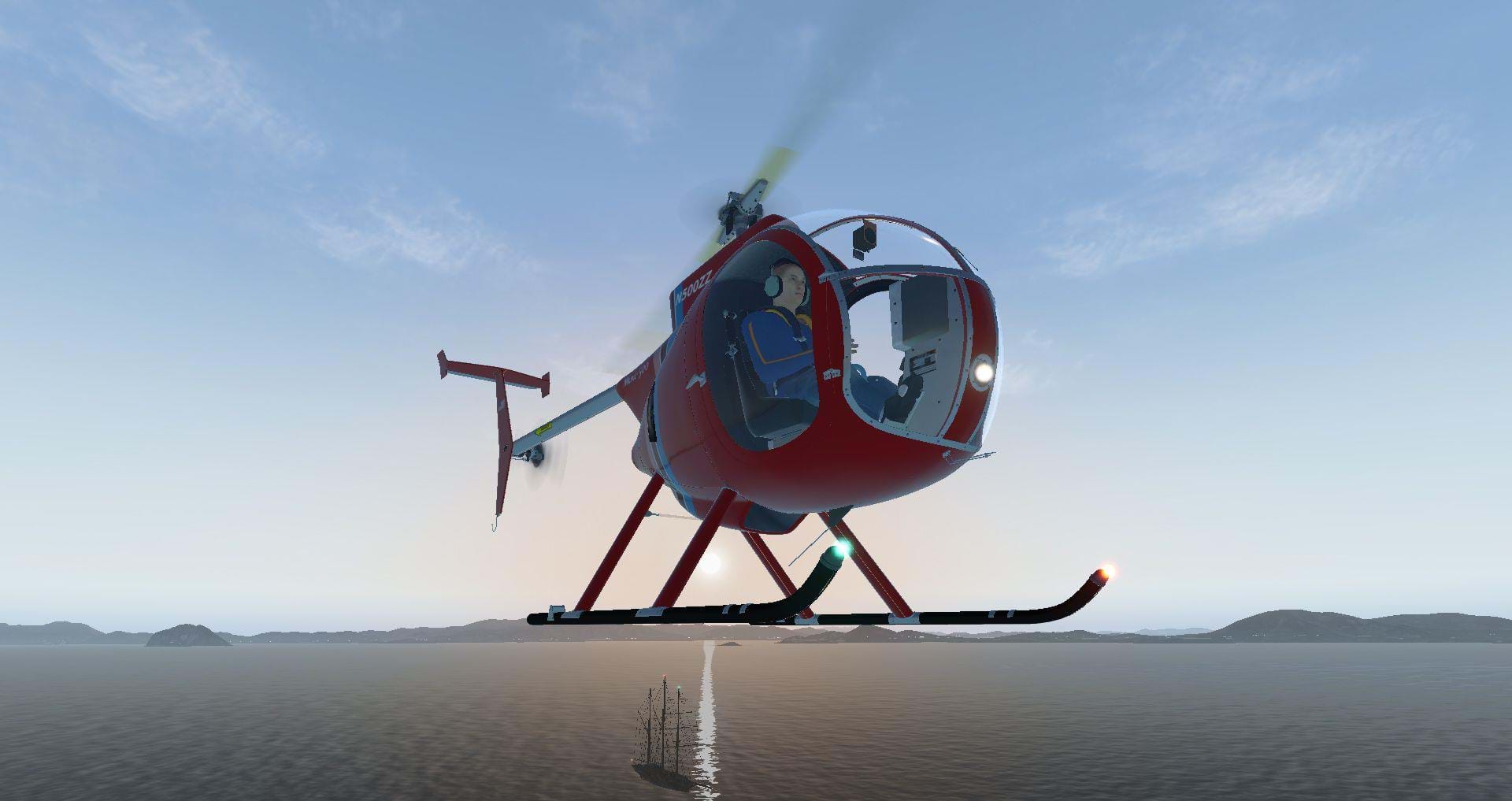 As I already mentioned before, VSKYLABS’ approach to development is quite unique and interesting. They aim at developing addons that doesn’t require specific development for X-Plane (plugins), which can be a challenge in many ways.

Not building their own plugins means they are at the mercy of what X-Plane offers them, which, for some, may be a scary thought. Not for VSKYLABS. Actually, they embrace it.

For the Mini-500, VSKYLBAS is debuting their “Test-Pilot” series of products, where they are using Laminar Research’s Experimental Flight Model for X-Plane, which you need to enable in X-Plane’s General Settings. 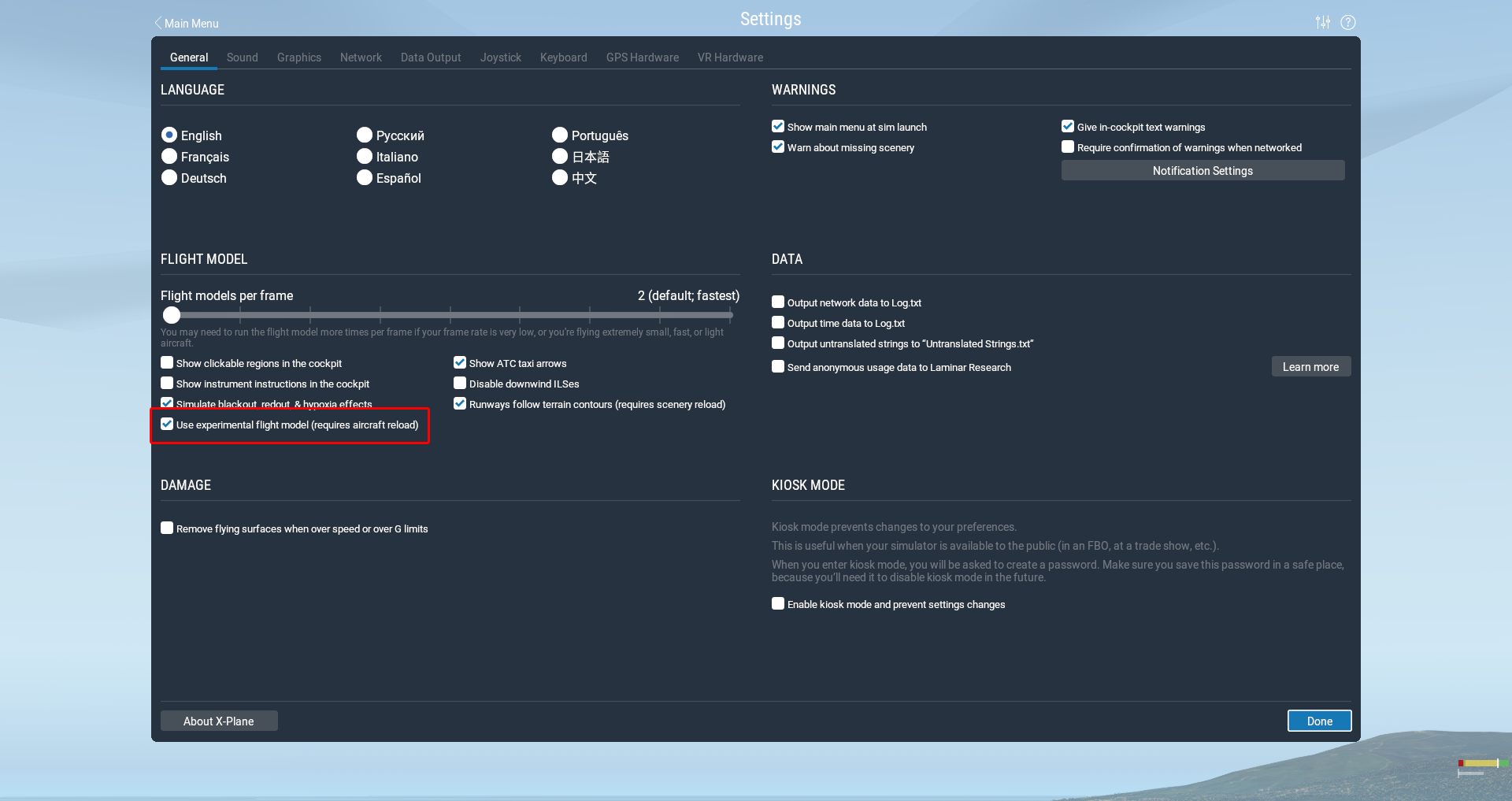 That’s right: the team is already spearheading the development of aircraft using this flight mode (with what’s both good and bad as with any advancement in software development). 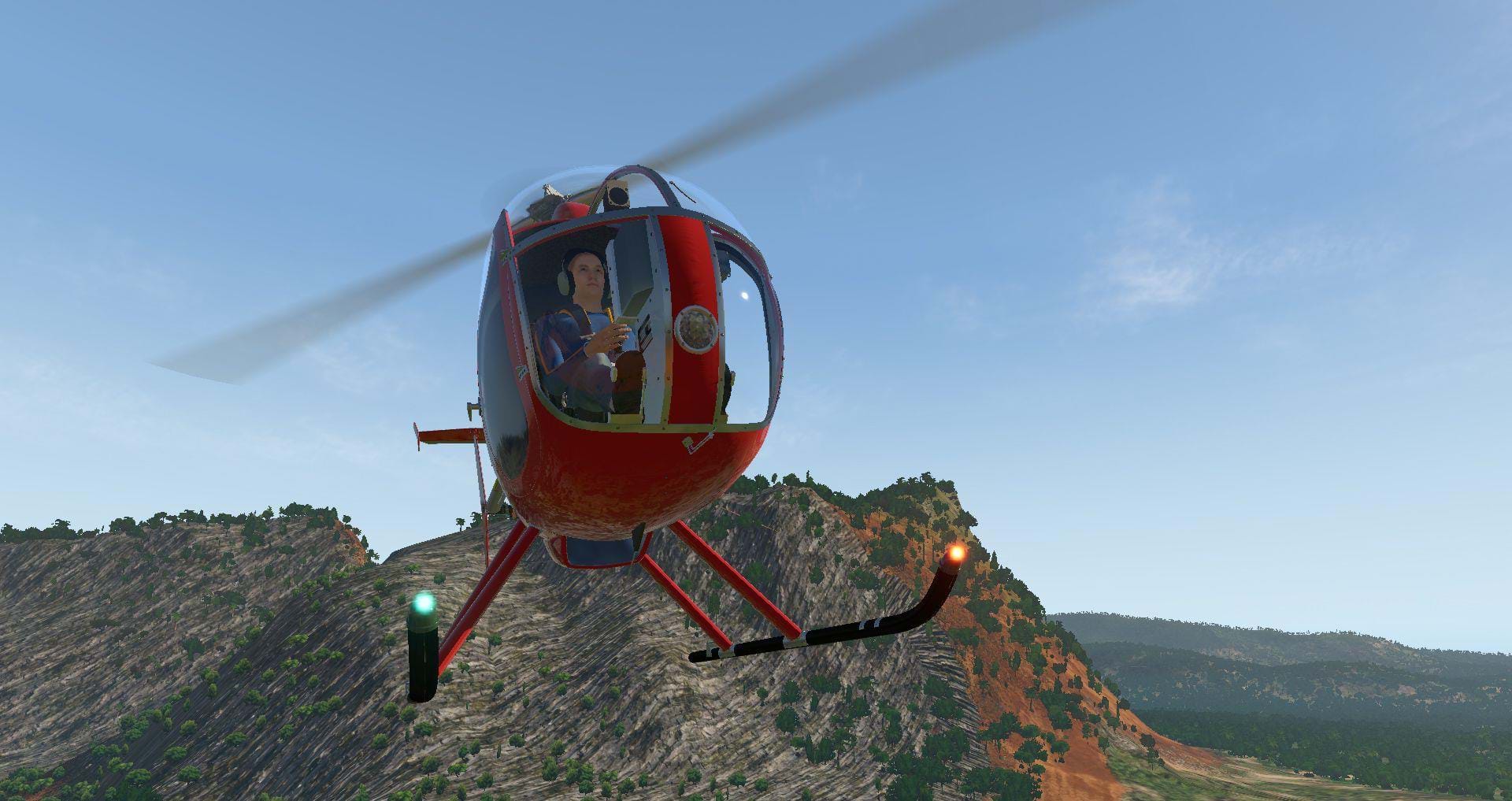 First of all, you should know that the Revolution Mini-500 is nothing like a regular MD500 nor it has nothing to do with the model, except that it resembles it shape. Everything else is like comparing apples and oranges.

The Mini-500 was designed and built in the 1990’s by a gentleman called Dennis Fetters who wanted to make a home-built kit. No joke. This thing was sold unassembled and you’d have to build it yourself. 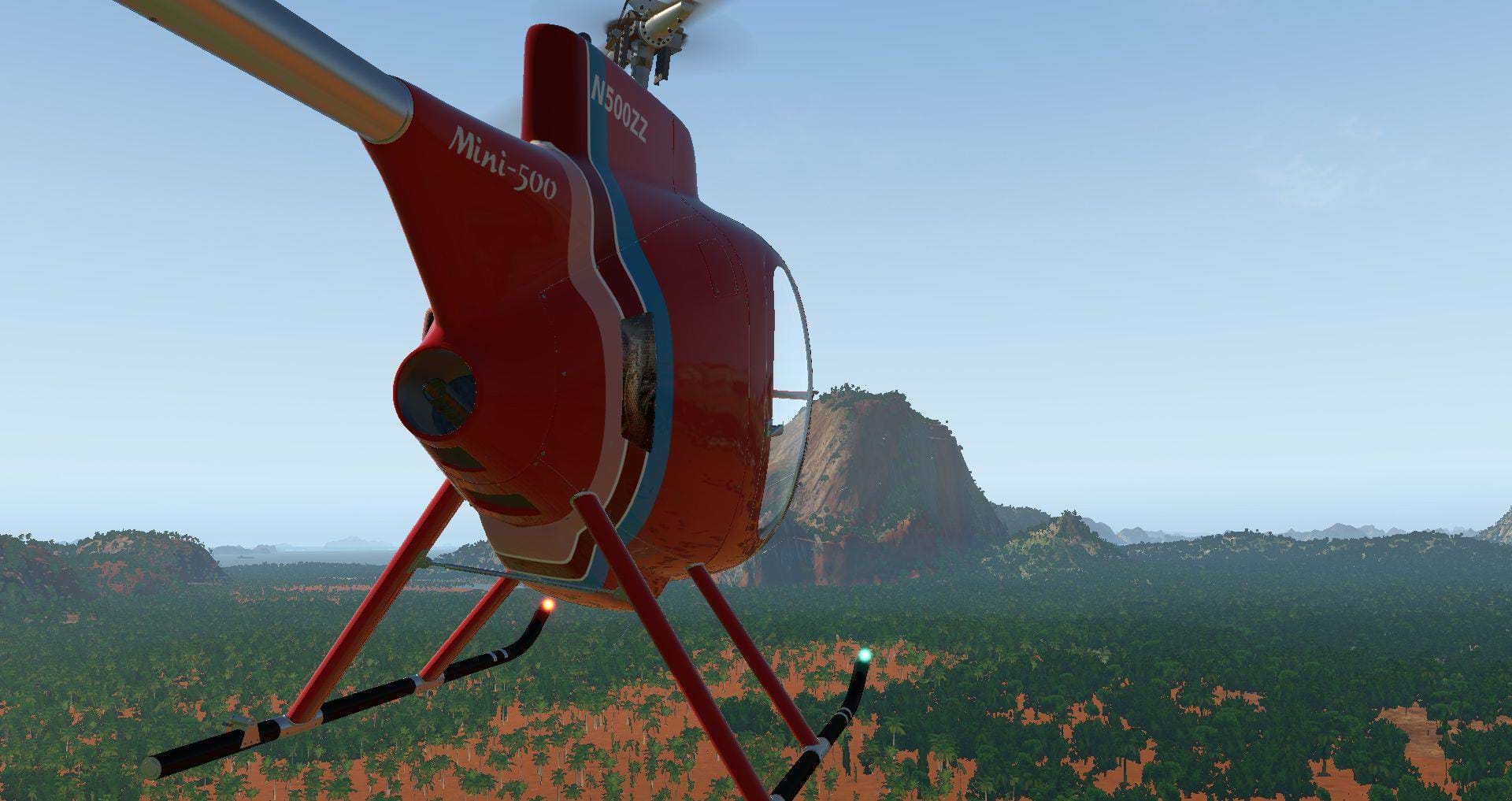 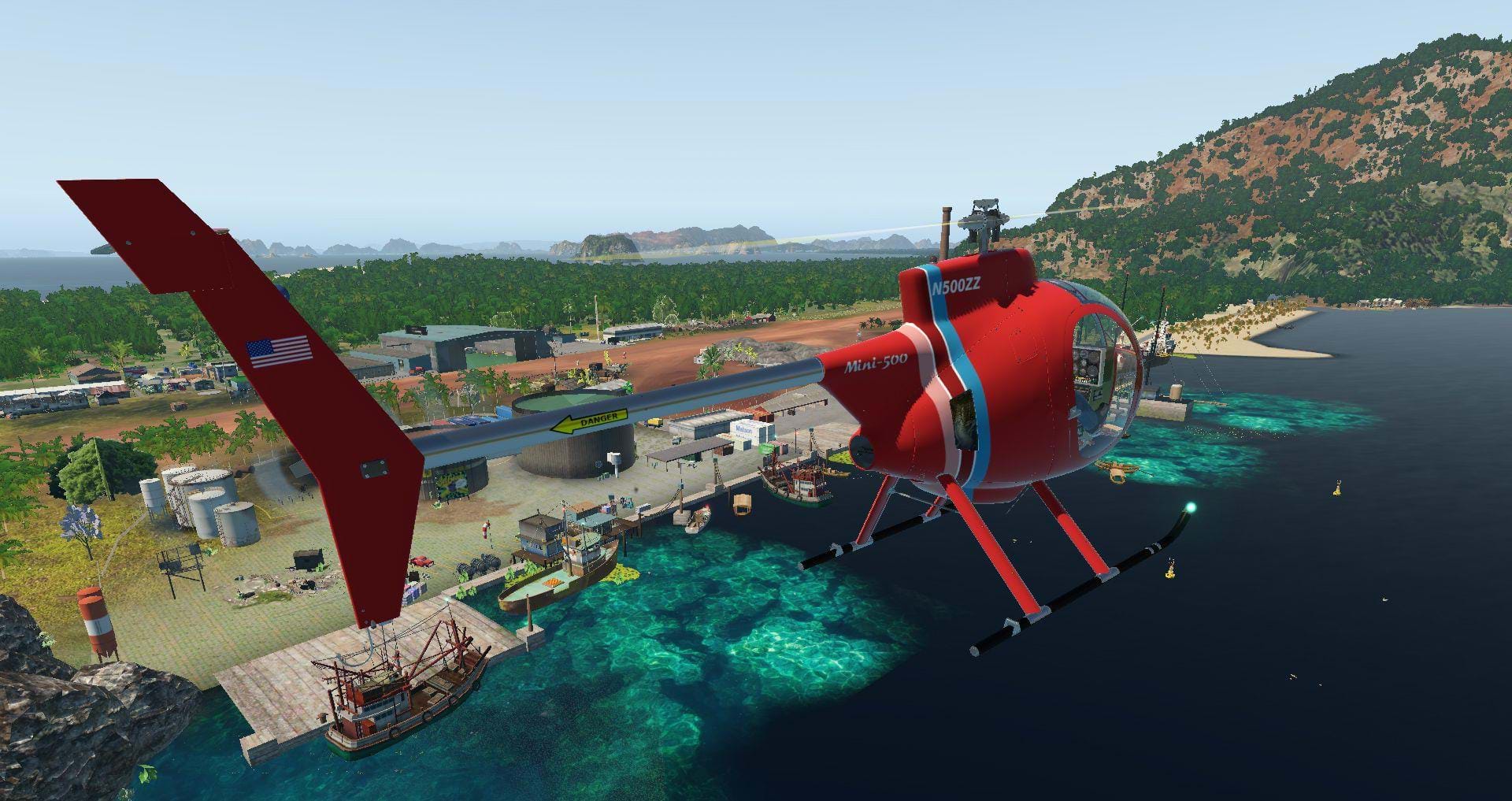 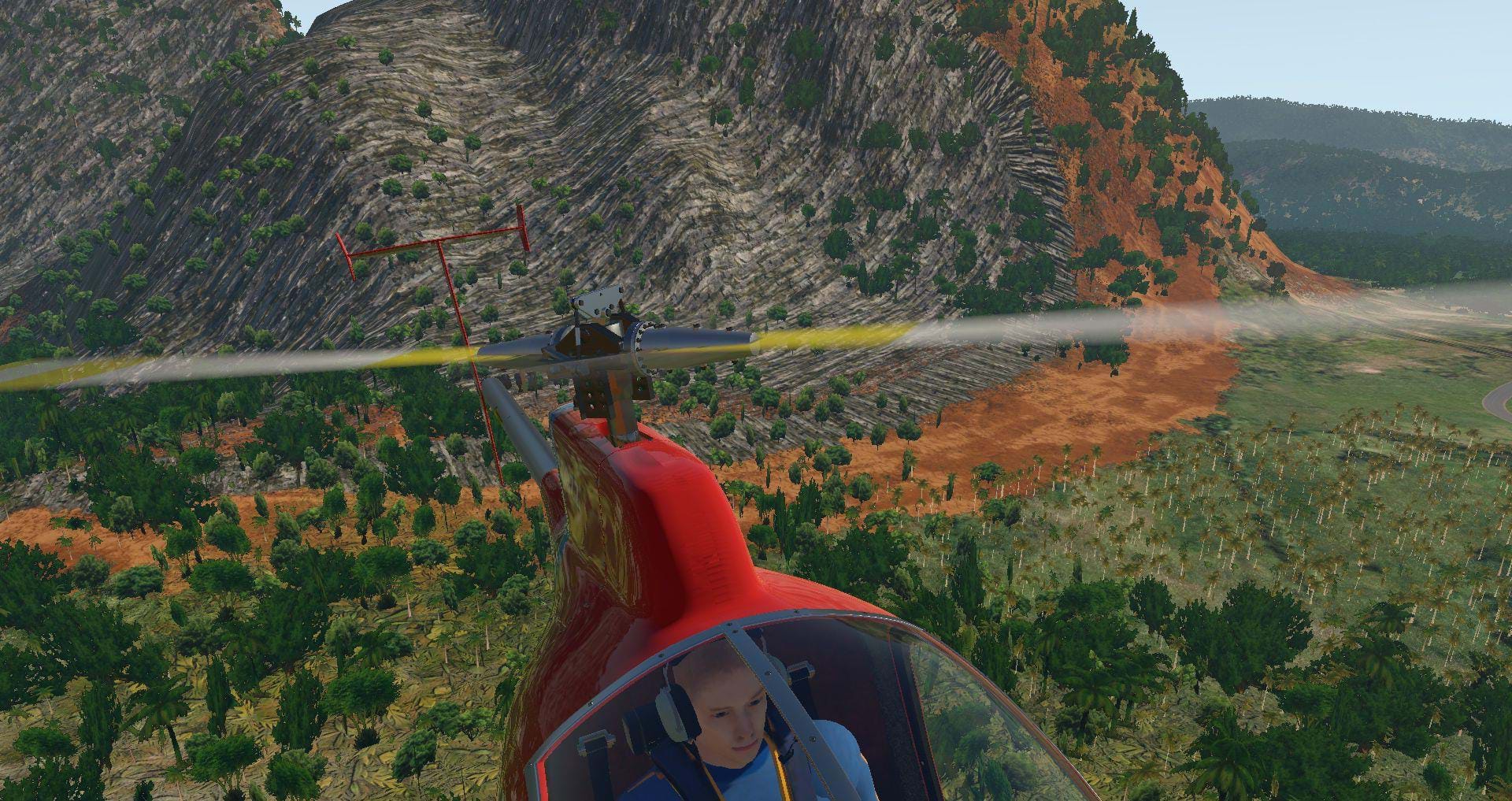 VSKYLABS had access to a lot of data and did their homework on this one to make it as realistic as possible. Bear in mind that, as a kit, the Mini-500 is both a very lightweight helicopter and, well… a kit. So, it will not behave like any other “regular” helicopter and it will have its quirks.

A word of advice: read the manual prior to start doing any crazy stuff such as autorotations. This is not your normal helicopter and it shows. 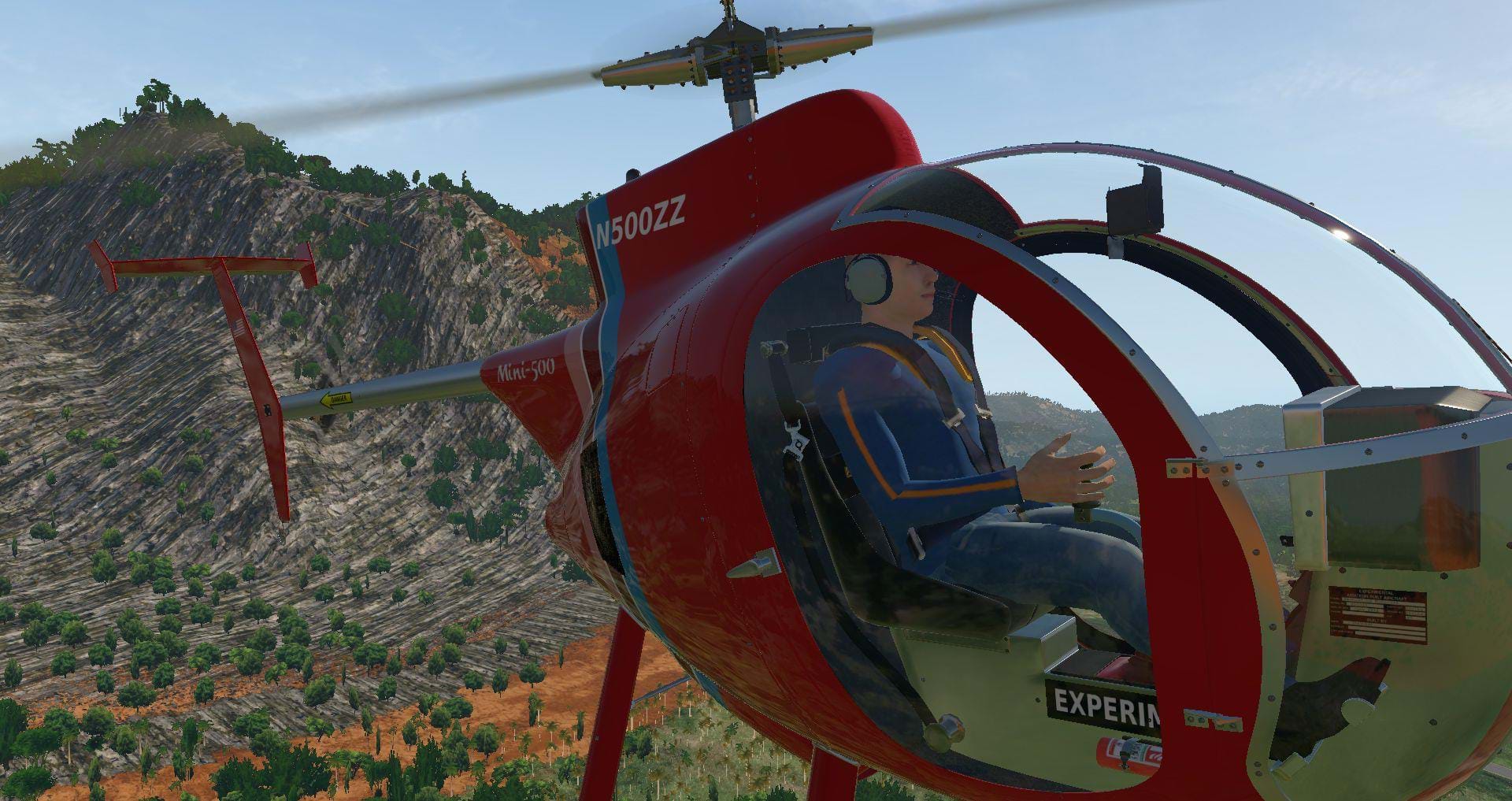 As per the official website, here are the Mini 500 features:

For a small package, VSKYLABS added quite a bit of nice features. Mast bumping on this baby? Mmmm… Seeing is believing.

And I saw. And believed. 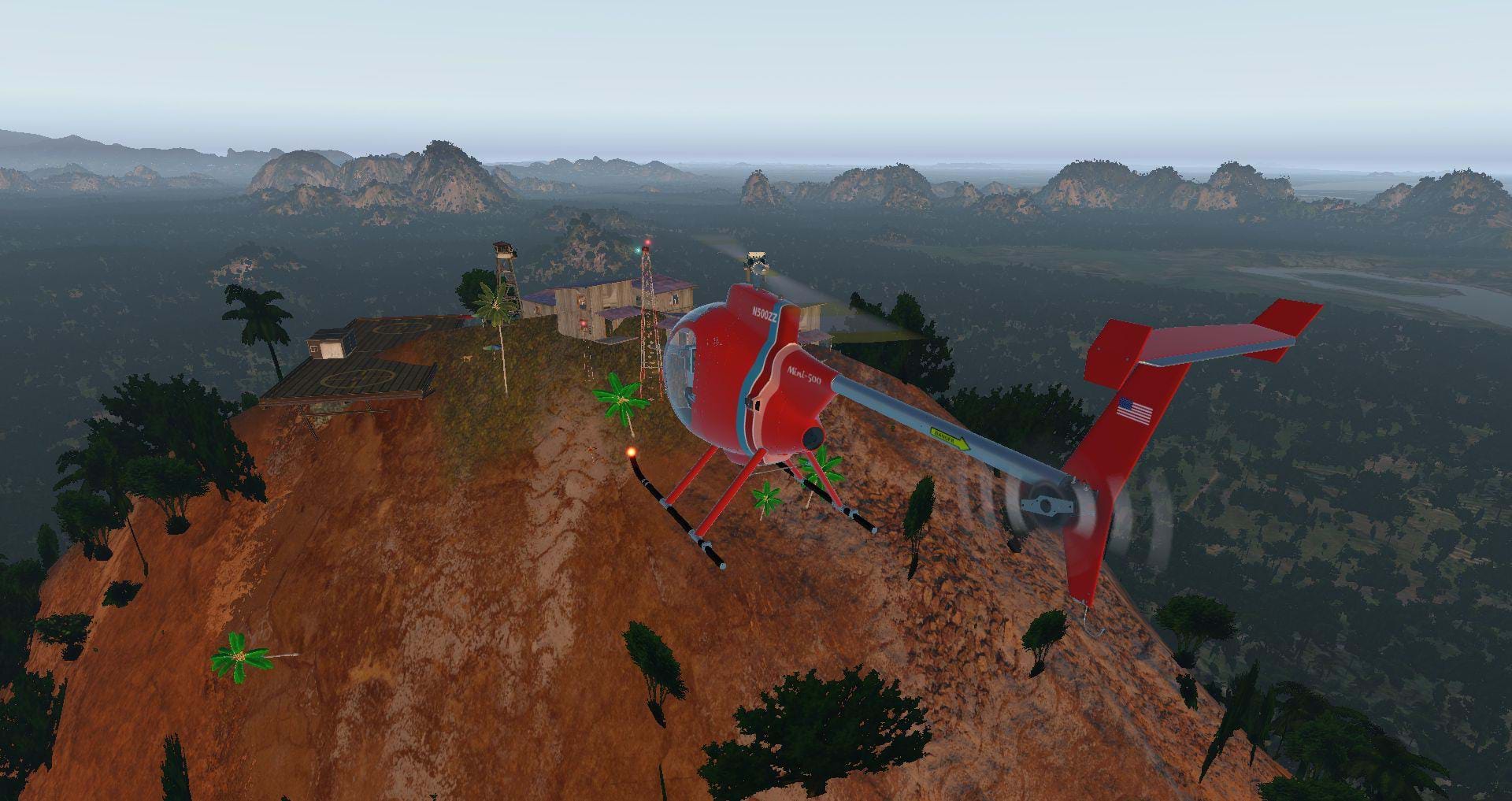 I took her for a spin and, after hovering for a couple of seconds, I pushed the cyclic away and off we went.

I did notice she gained altitude very fast, even before reaching 20kts. I’m not sure the real helicopter does the same but, if it does, the first few feet feel like you’re on a small jetpack as it climbs almost vertically. Passing 20-30kts, things are business as usual and off she goes.

I did a couple of circuits to get the hang of her and then decided to climb to 2,000ft and do an auto. VSKYLABS warned me and the manual did as well: she does not care that you were the one building her. She will kill you. 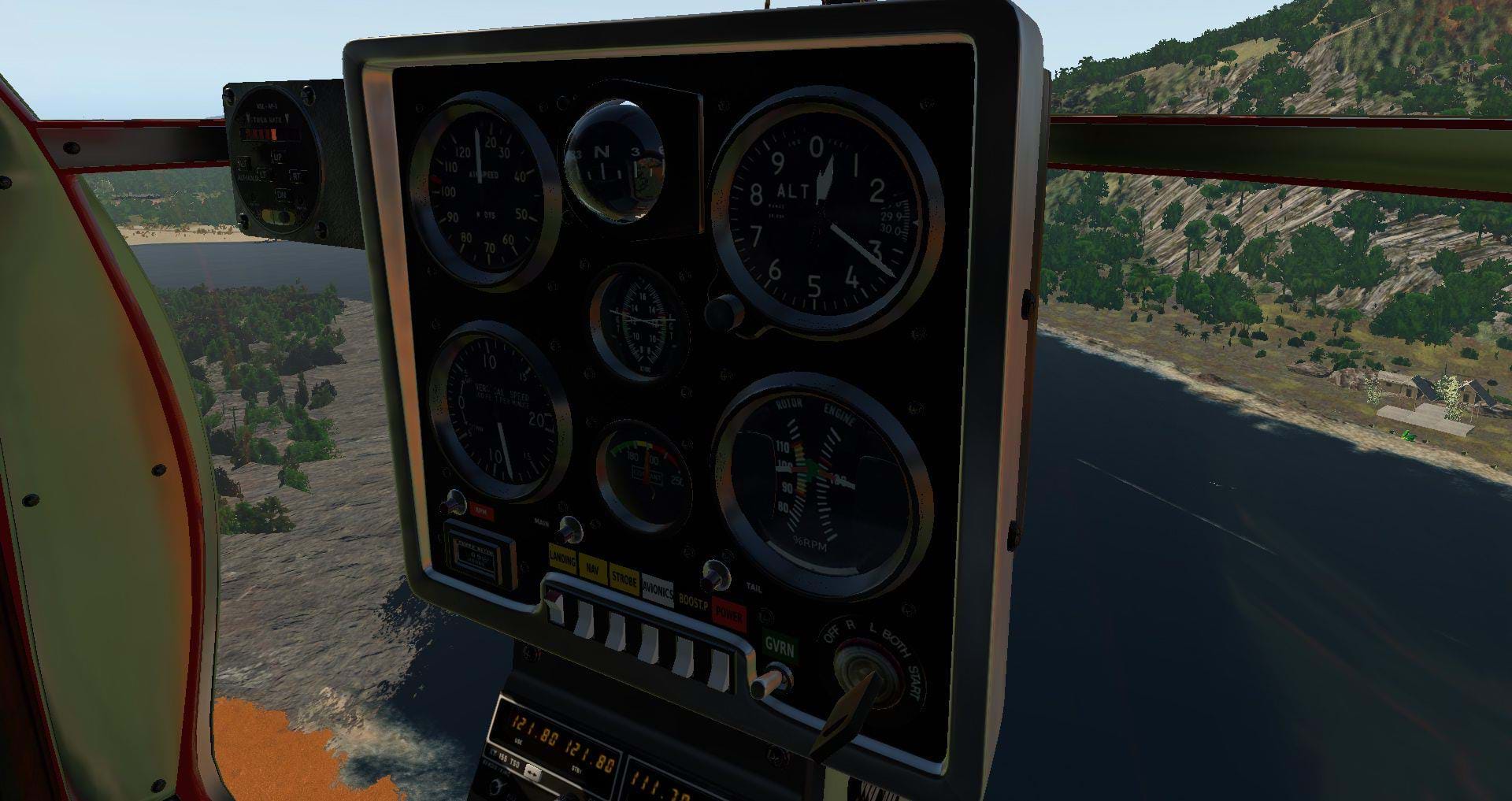 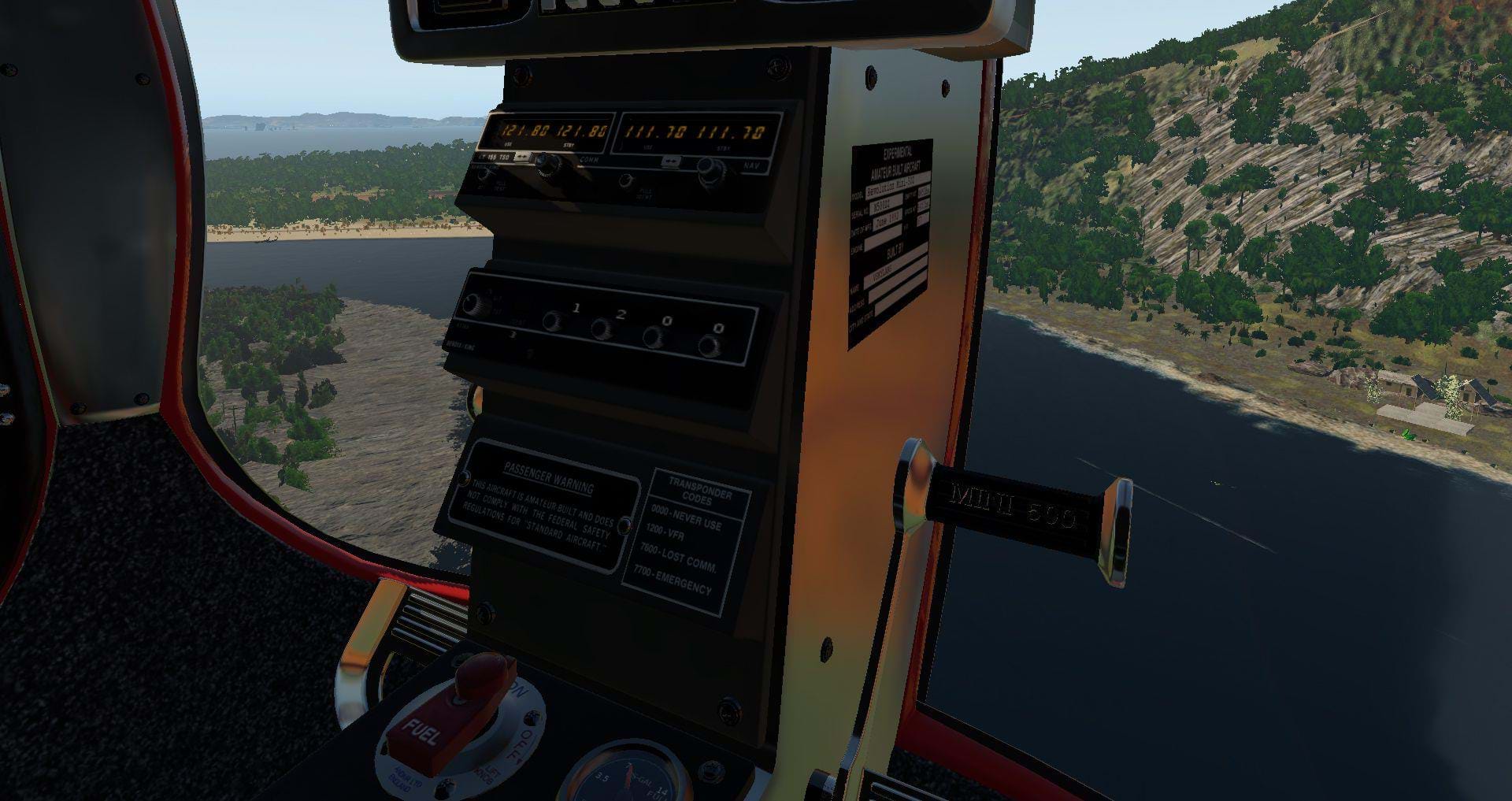 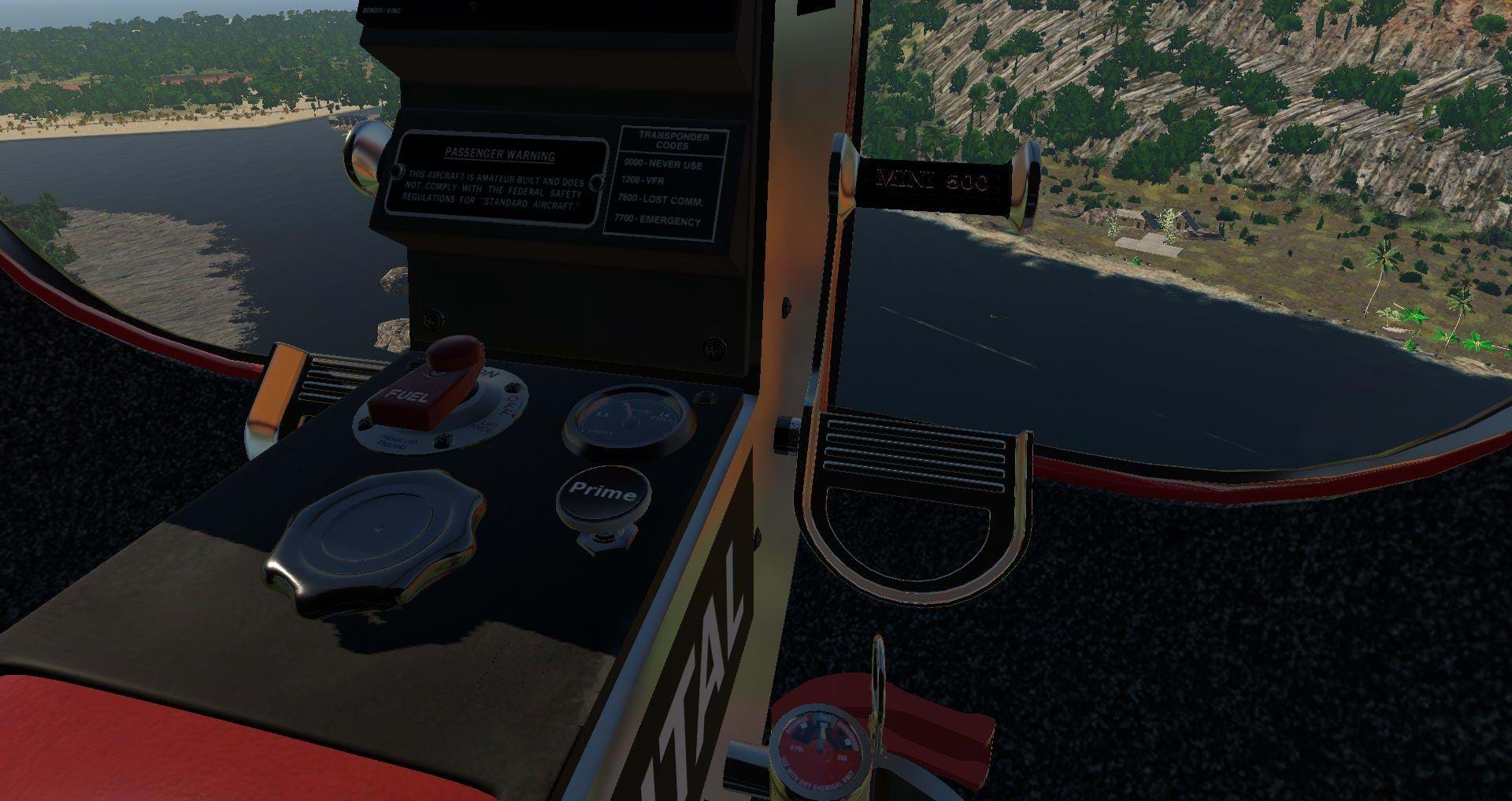 On page 40 of the manual, you will find the following:

Pay close attention to initial actions on engine failure (as described in the checklist). The Mini-500 will have a nose-down tendency that can be managed with proper collective and cyclic operations, as advised in the emergency checklist.

Beware of your collective when you lower it if you enter an auto. She will want to nose dive FAST and, if you happen to overreact, you might end up bumping your mast and off you go to your merry splattered death.

The problem is: being a Mini-500, that’s also a mini-window. She’s a lightweight, fragile helicopter and you cannot forget that. Ever. 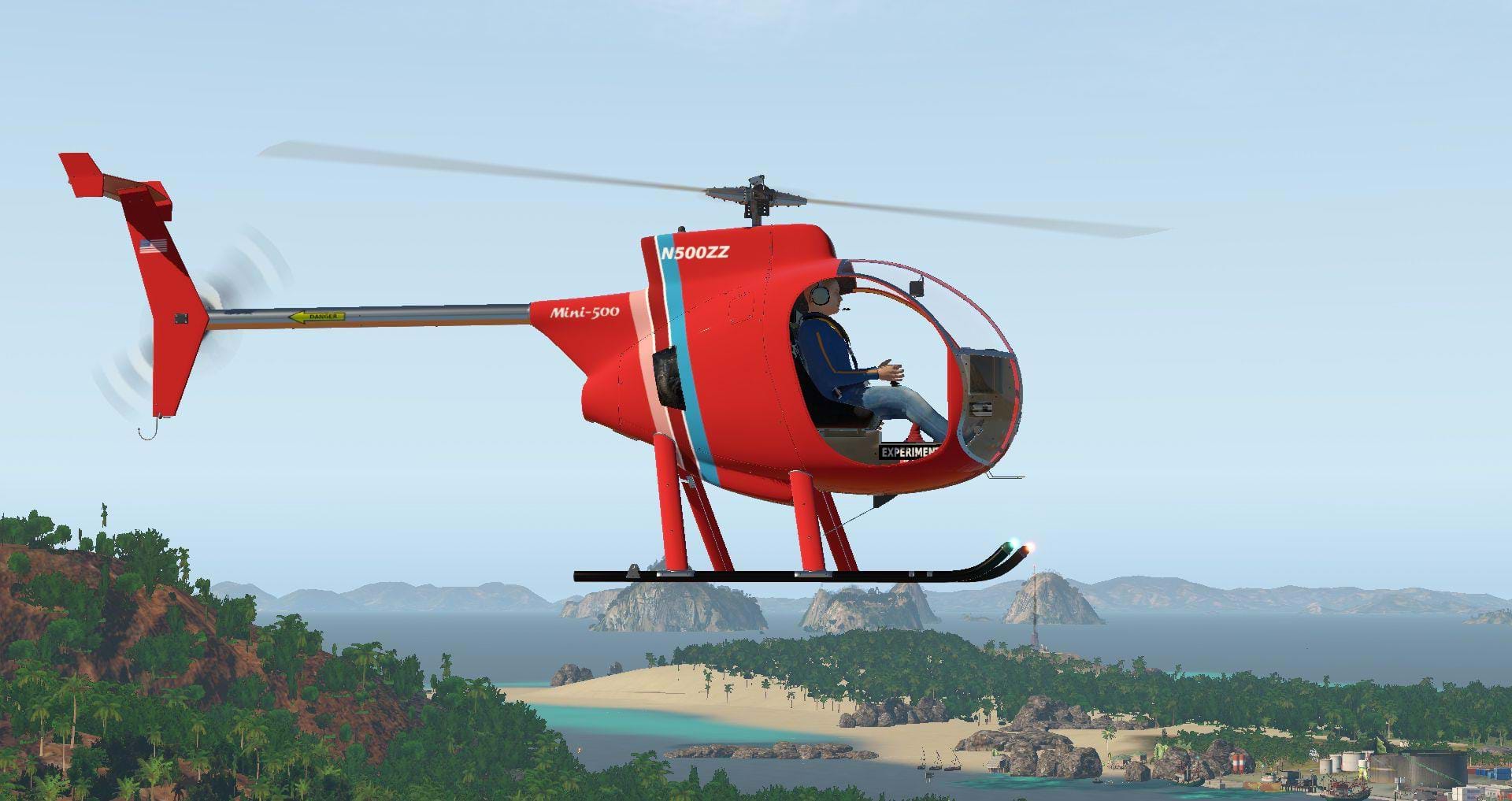 Continuing on the flight model, I found her interesting enough for a small “gadget-like” helicopter. You’ll need some left pedal as you hover or take off and you’ll also need some left cyclic to keep her in place (due to translating tendency).

She handles pretty well in all flight regimes although, like I said, I feel she “pops-up” too fast as you reach 20kts. Again, I have no idea if the real one behaves like that, but I don’t find it to be especially bad. It’s manageable and it may actually help you get away from some nasty situations at low altitude and low speed.

I don’t really have a lot more to say about her. The Mini-500 is a simple helicopter and it acts that way. I like the fact that VSKYLABS added a switch to turn the governor on and off (the real Mini-500 has no governor but VSKYLABS decided to add one) so that you can manually control the throttle. Do keep in mind that, right now, there’s not a lot you need to do throttle-wise as that part of the helicopter still needs some adjustments, which the team is working on. The main difference right now when you turn the governor off is the fact that you can throttle her down so you can practice your autos. That will be fixed soon. 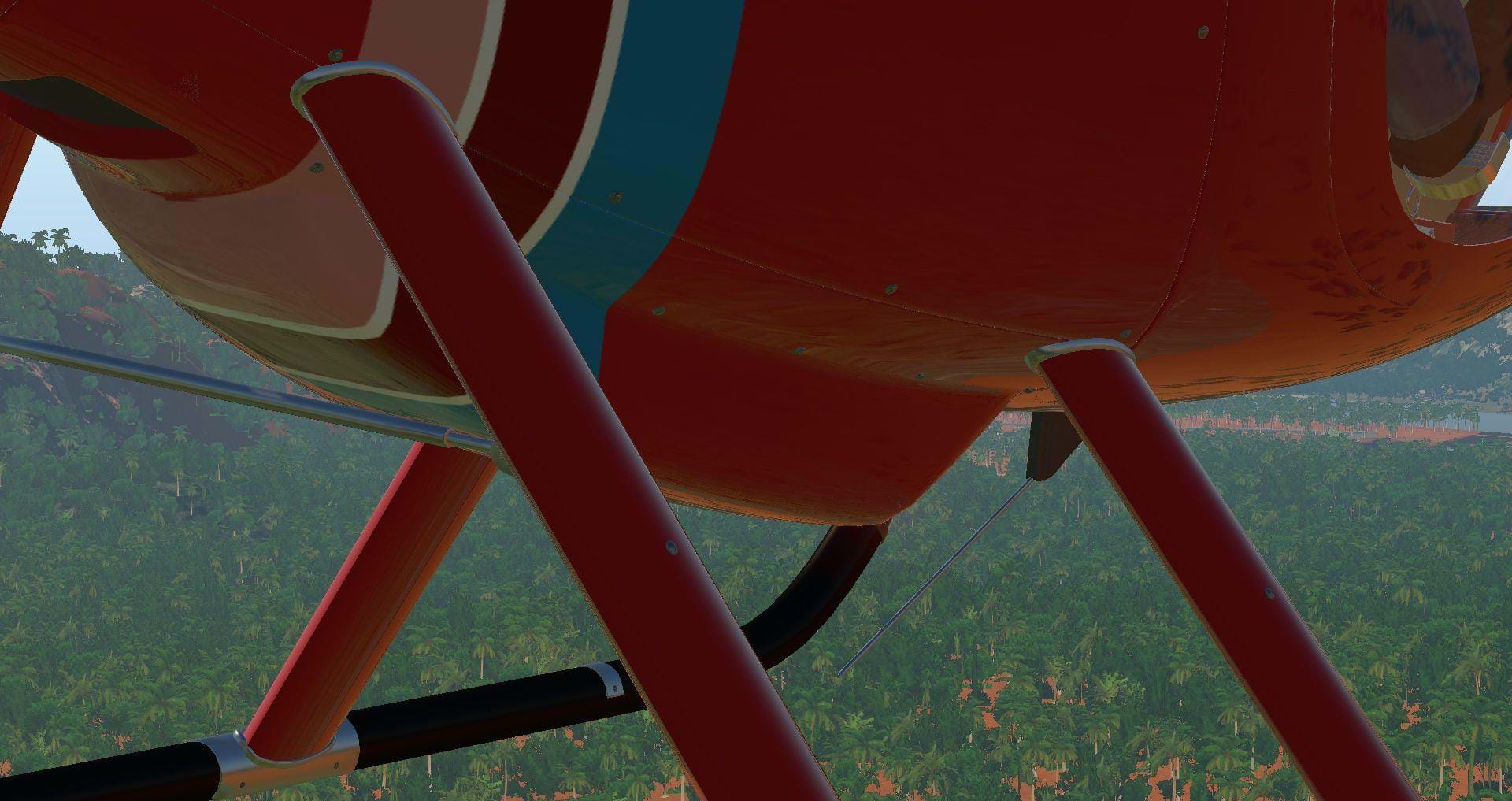 Again, as with everything in the Mini-500 , she’s a simple helicopter. It does resemble an MD500 but it’s a model kit and those are usually a bit rough around the edges (the panel is just this box thing with gauges attached – just like the real one).

VSKYLABS did a good job at modelling her and she’s pretty to look at, even for such a small and simple model.

Sounds are pretty good. I was hoping for some cooler startup engine sounds (more on the startup further below) but, overall, they work nicely. It’s a piston engine, it has some alarms and that’s pretty much it.

VSKYLABS is using FMOD, which gives it a bit more of “layered” sound but this model doesn’t gain too much from it as there are no complex sound systems to be implemented.

Sound plays its role and does what’s supposed to do. No surprises (good or bad) here. 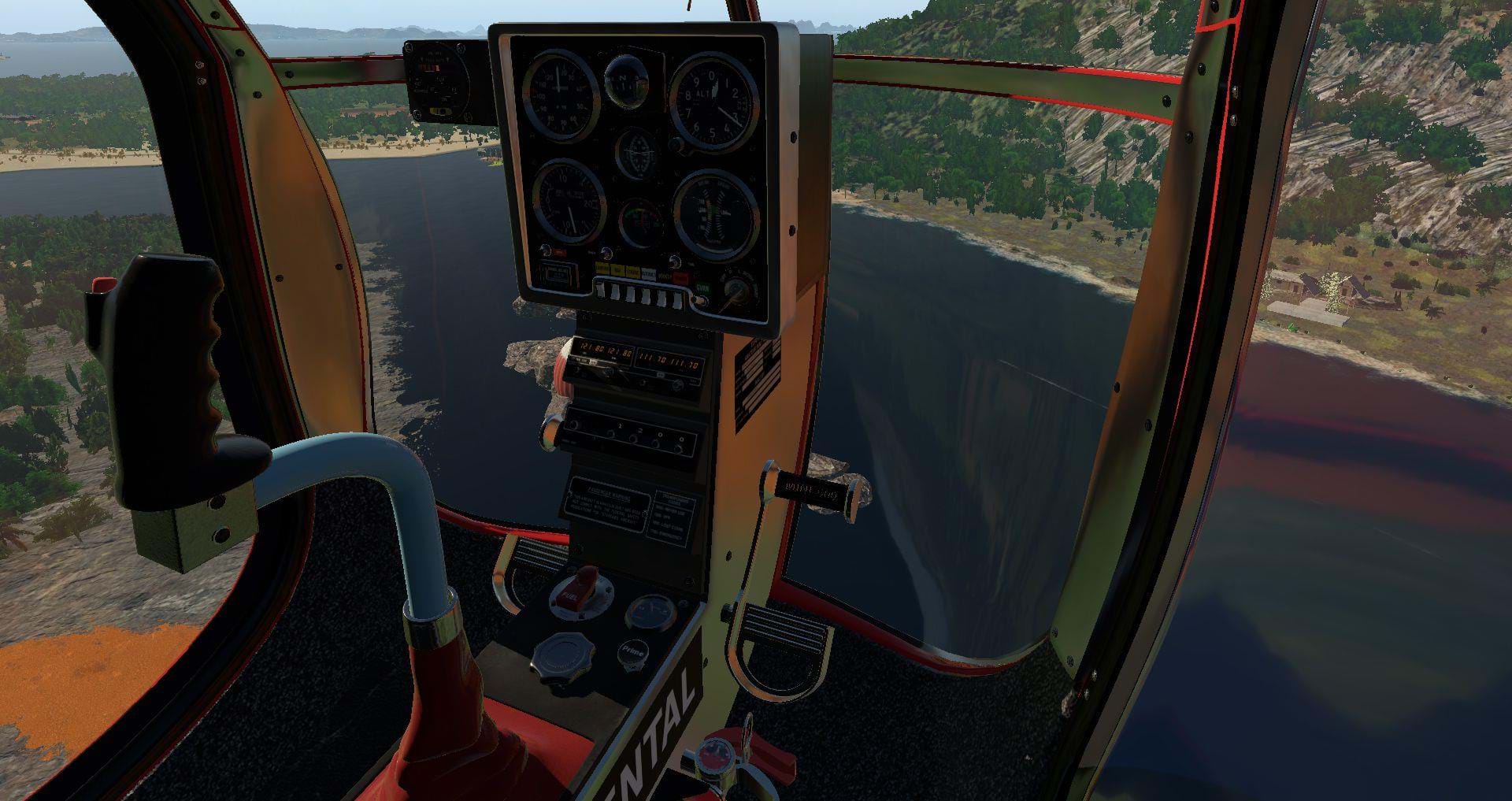 Starting her up is really easy but it’s also home of one of my two complaints with this model.

In a very simplistic way, all you need to do is to turn the fuel valve and master switch on and turn the ignition key, but I found that the engine comes to life way too fast. It’s instantaneous. I’d like for it to take a bit longer as it looks a tad unrealistic as it is right now.

VR in this little helicopter is fantastic. VSKYLABS made it so that she was and it’s fully VR-ready.

BUT, there’s a catch. The view all around is great (and you can even remove the doors so that it’s completely unobstructed on the sides) except… Looking forward.

The compass is right there, on your face! 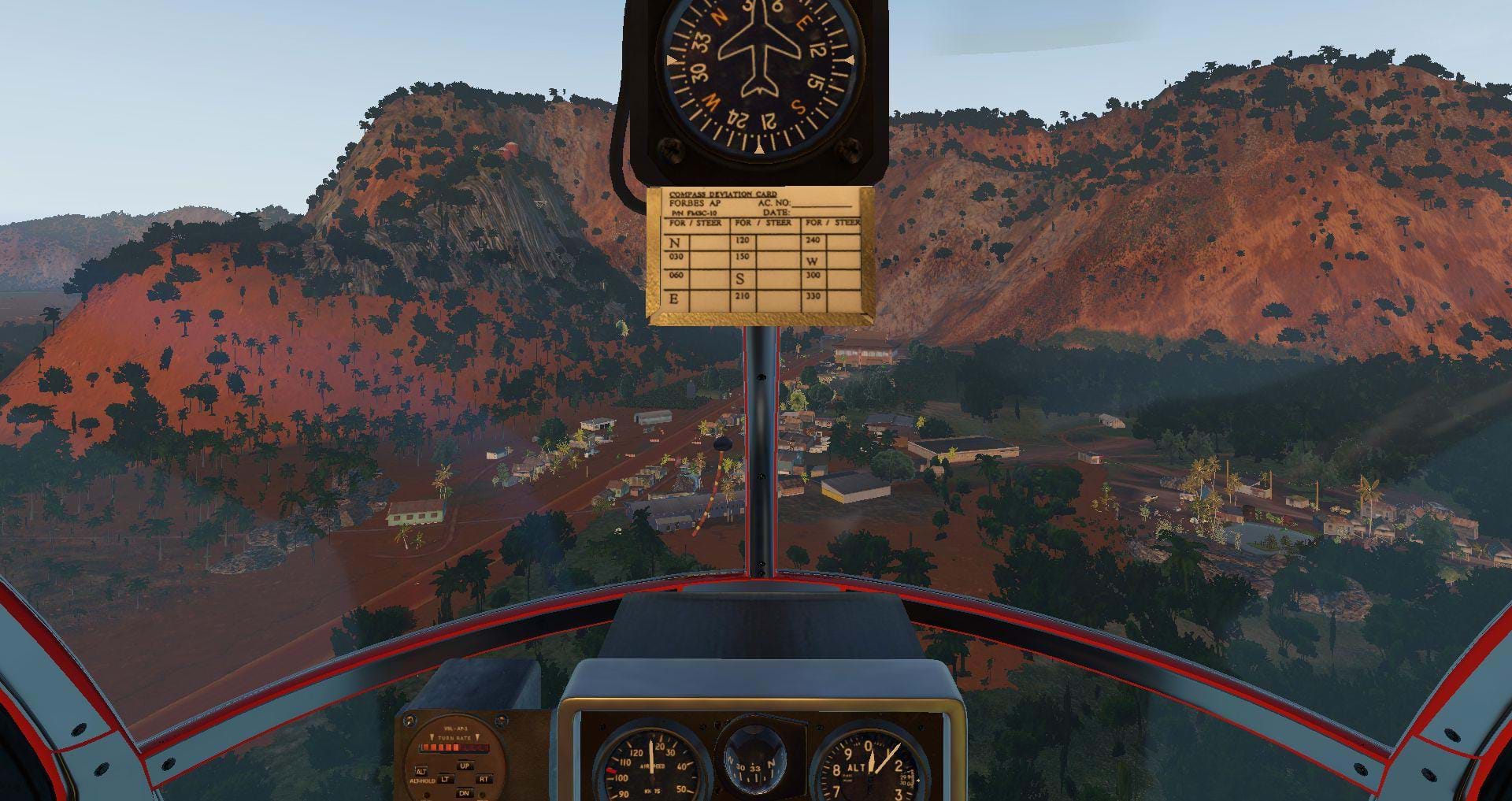 If you sneeze, you will hit her with your forehead! Yes, she’s handy but not on that place! I would probably place her on the top of the panel or on the opposite side of the gauge that’s used as the autopilot. Right now, it’s ruining a bit of the experience and I hope VSKYLABS considers repositioning it (or allowing us to select from a couple of positions).

If you check out the official page for the project, you will notice something:

The project is setting up a highly detailed and highly accurate Mini-500 simulation along with full VR compatibility. 2-3 variants are planned down the road.

VSKYLABS told us that they might release two other variants: a turbine and another, more powerful piston-engined version, the MH-1, although it’s not 100% confirmed yet.

If they are, indeed developed, these versions will be released as a free-of-charge update so you will get 3 versions in total, with slightly different characteristics and handling.

I am particularly curious about the turbine version. That should be a fun one to cruise along the tree tops so I am keeping my fingers crossed and hope that VSKYLABS makes us happy. 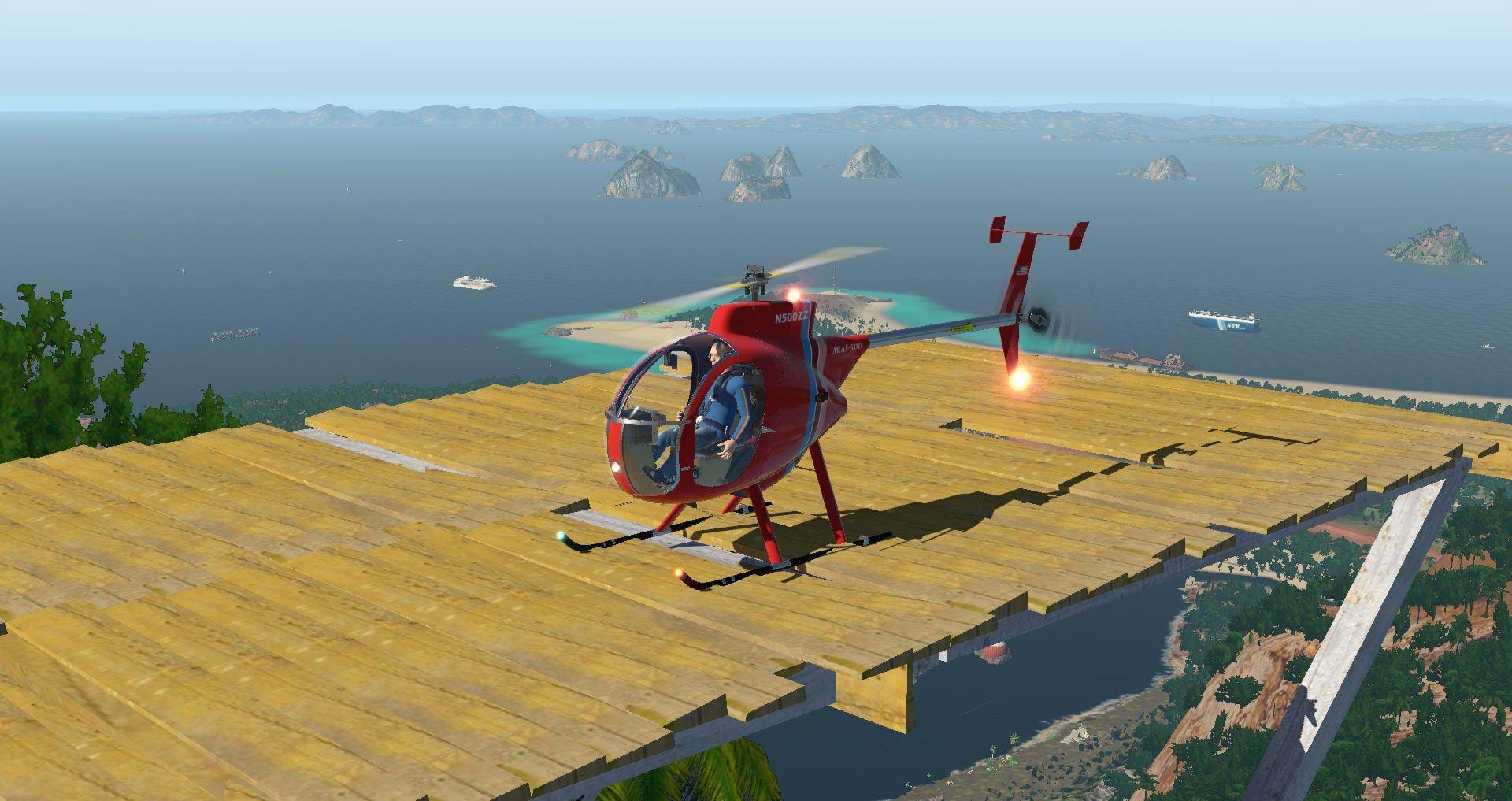 The VSKYLABS Mini-500 is not your daily helicopter and it shows. It’s a very simple machine, which is also what makes it a lot of fun, especially in VR (minus the compass trying to crawl into your nose).

She has her own quirks and characteristics and you’ll need to handle her the same way you’d handle a helicopter built by you. Which, in my case, I would never, ever, even start her up, let alone try to fly in it. I can’t build a plastic scale model without messing something up. I am sure I would probably kill myself in the process of building the kit or, if I survived the construction, I would probably blow myself up on the startup or something like that. 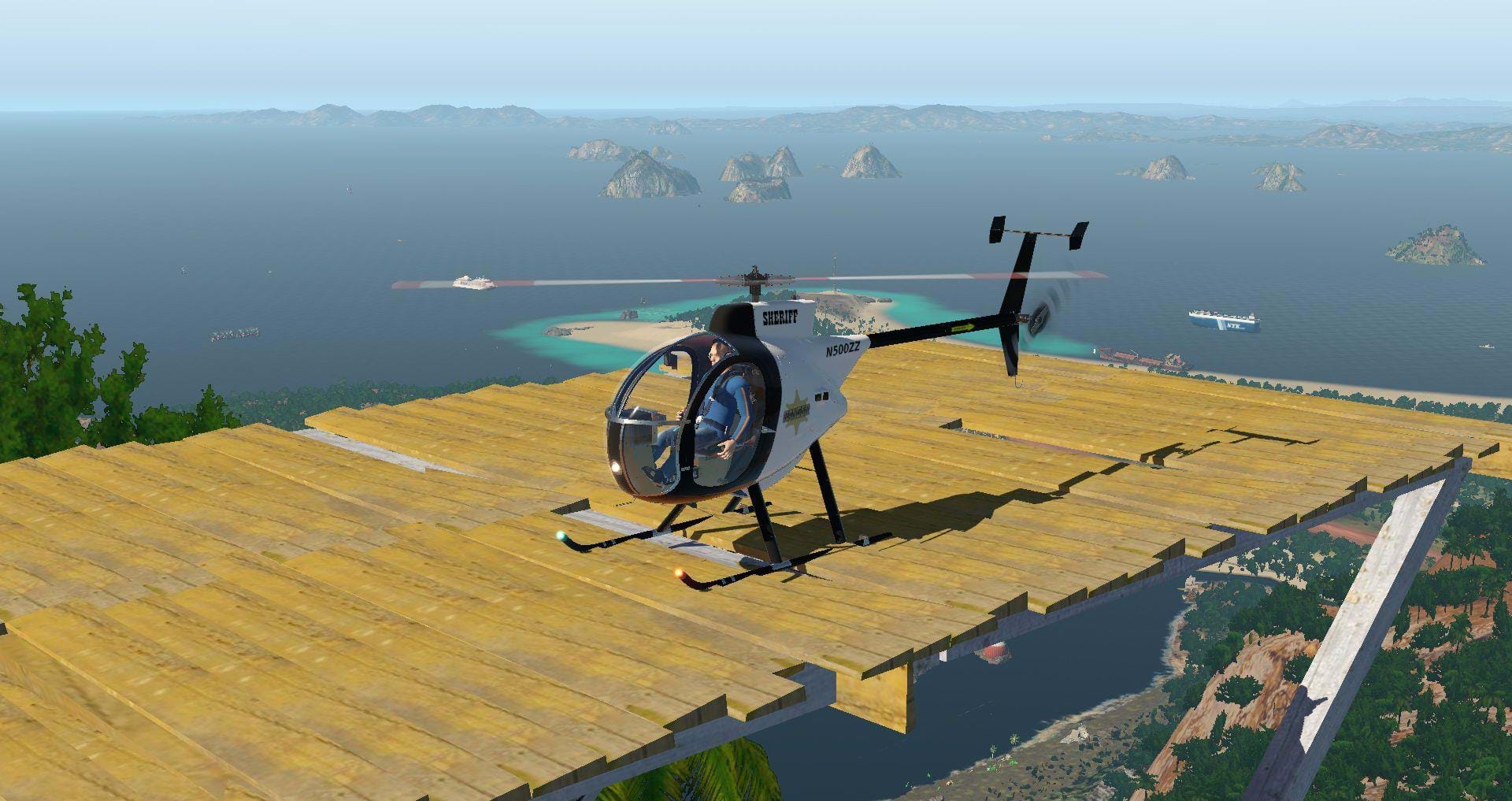 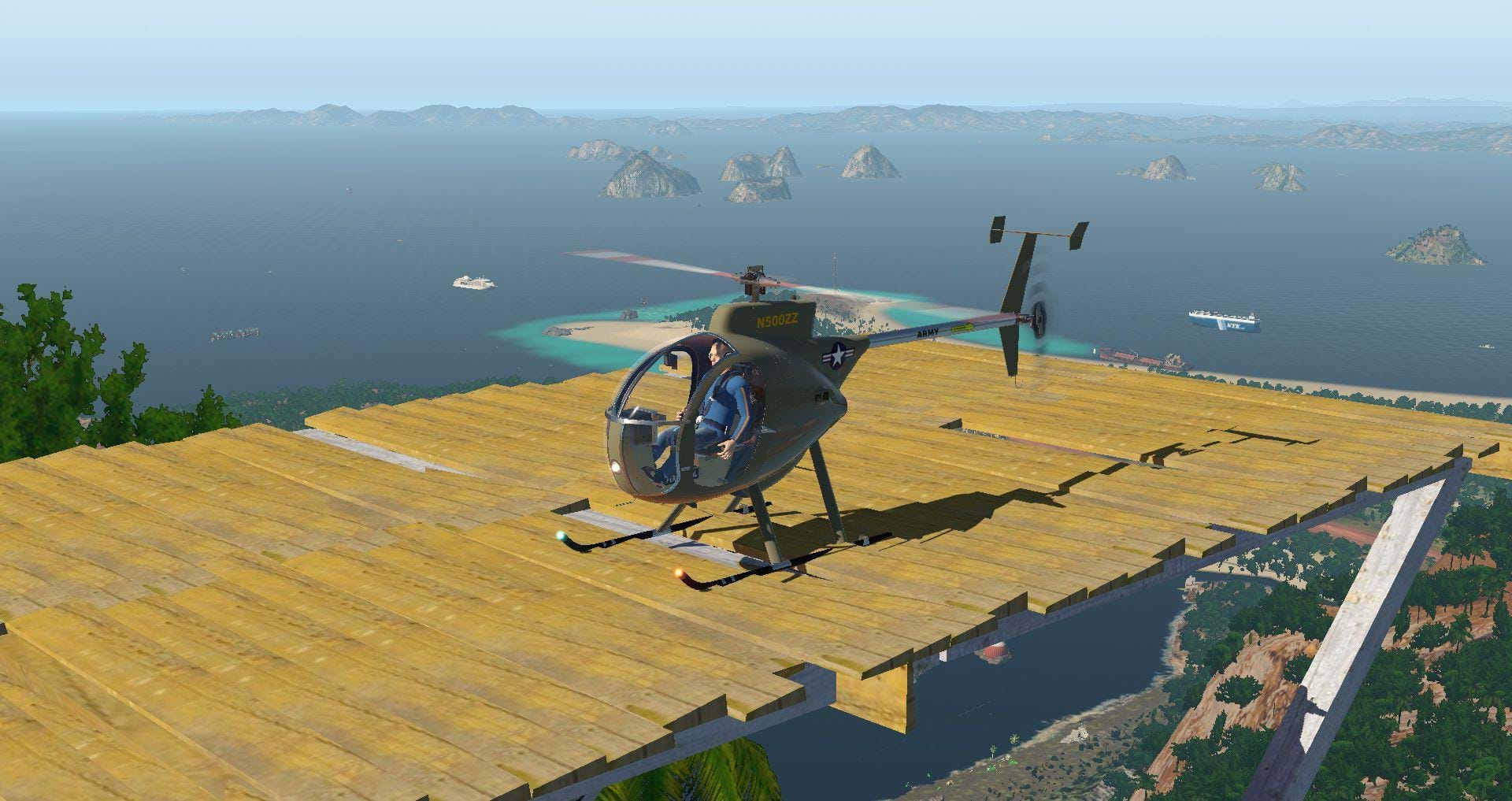 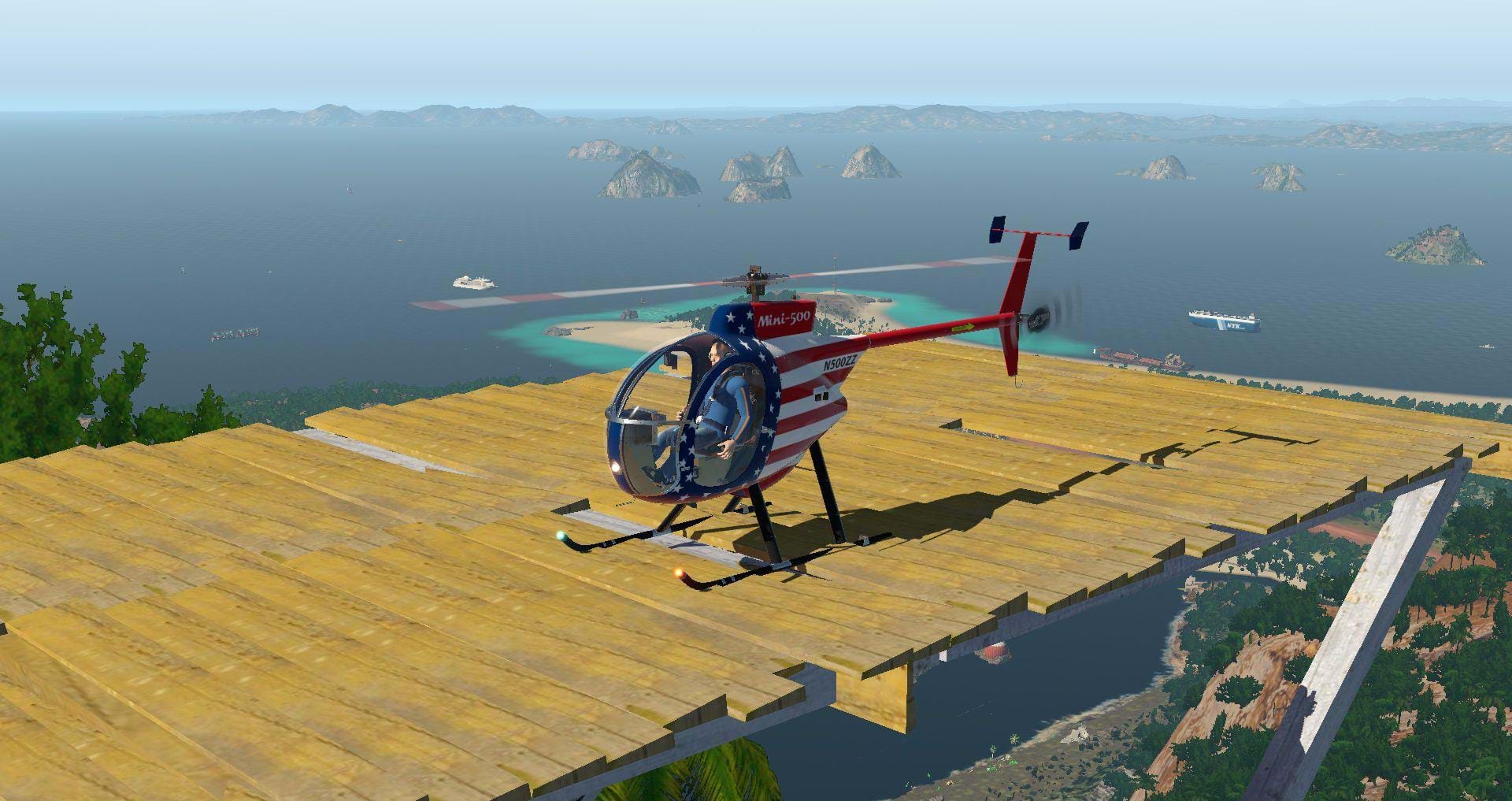 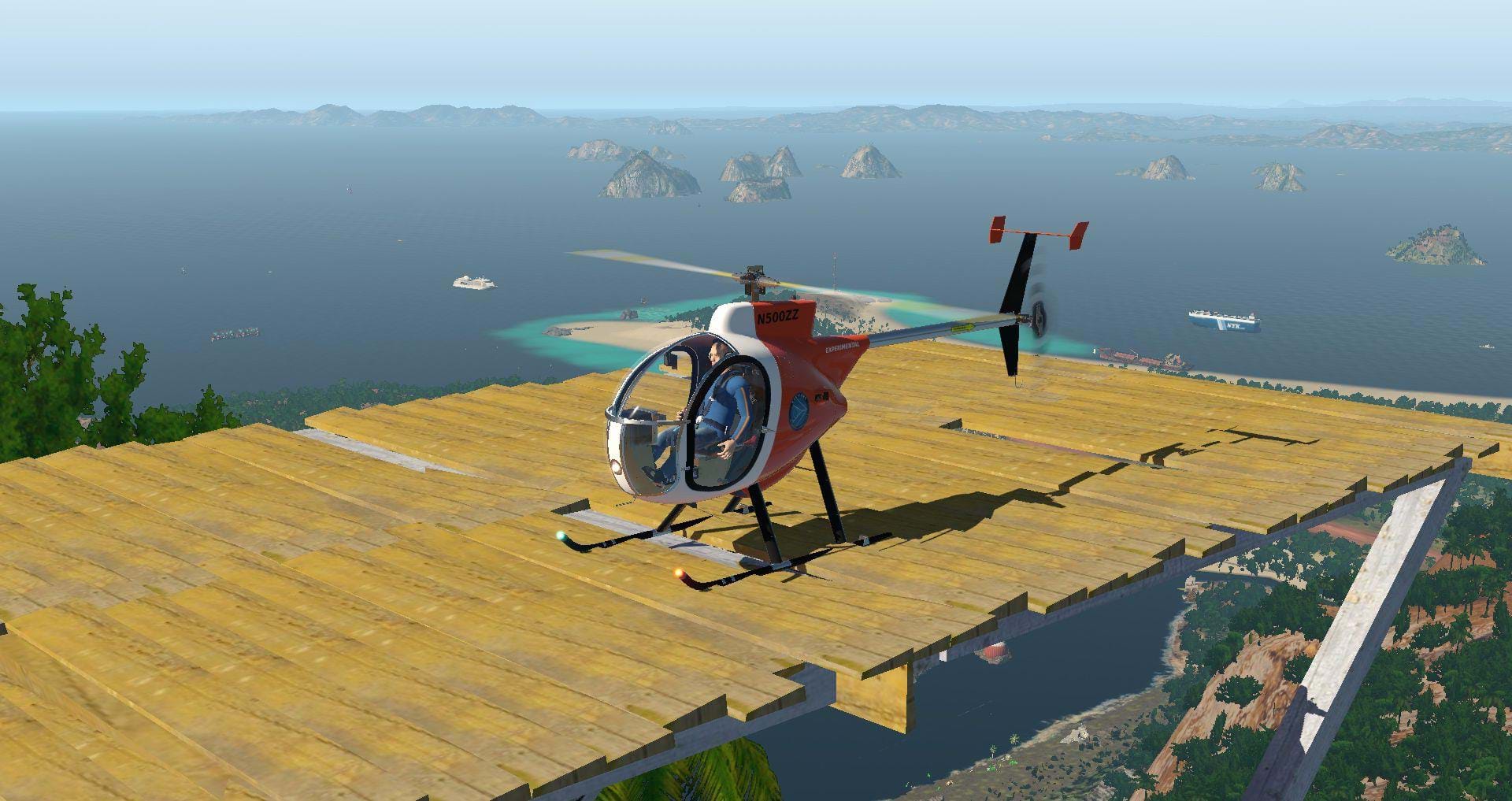 The bottom line is: you need to be careful with her. But, once you know how she handles, she can be a very fun little toy. It’s almost like having your own aerial motorcycle, that you can use to relax, check out some sights or simply challenge yourself to land on some very small areas.

The VSKYLABS Mini-500 is quite an amazing piece and an early dedicated demonstrator of X-Plane’s Experimental Flight Model which, even in a simple way, helps us test it and provide our feedback to Laminar Research.

It’s not as fully featured as other helicopters out there but, IMO, she’s still worth the price and we’ll soon get a couple more versions to tinker with.

The Mini-500 is a great little helicopter. It's a lot of fun and you can almost see it as your own aerial motorcycle. It's a no-frills depiction of a home-built helicopter so it's pretty raw, which makes it a bit more fun -- and dangerous -- to fly.

Installation 10
Model 8
Textures 8
Sound 8
Systems 7
Flight dynamics 8
Total score
8.2
* The above final rating is calculated from a weighted average and not the direct arithmetic average. This means that some elements of the review will have a higher influence in the final score than others.
Click here to purchase/download or more information 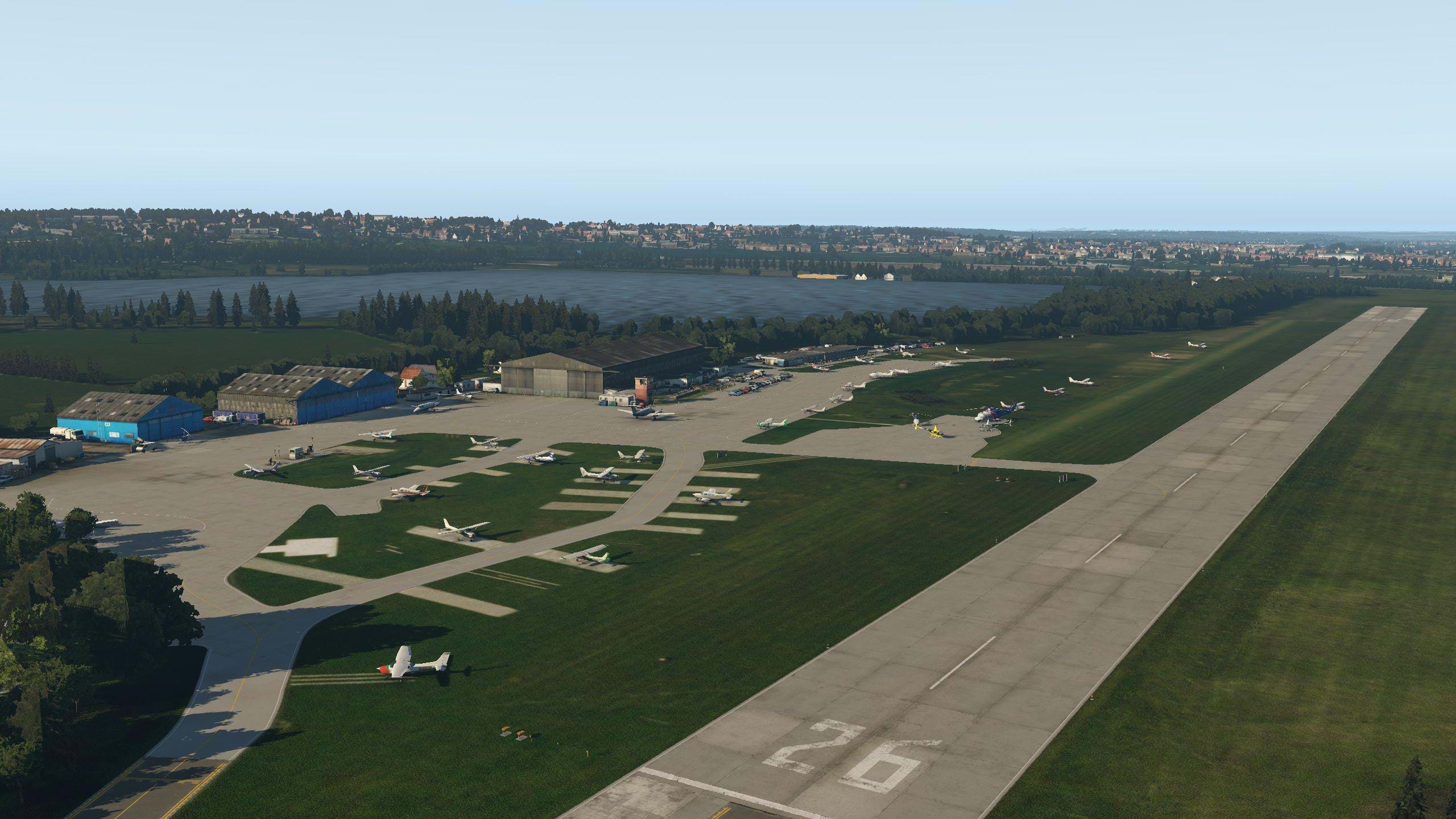