The most recent addition to the VSKYLABS hangar came out earlier this week and it does it all to consolidate VSKYLABS reputations inside the community. 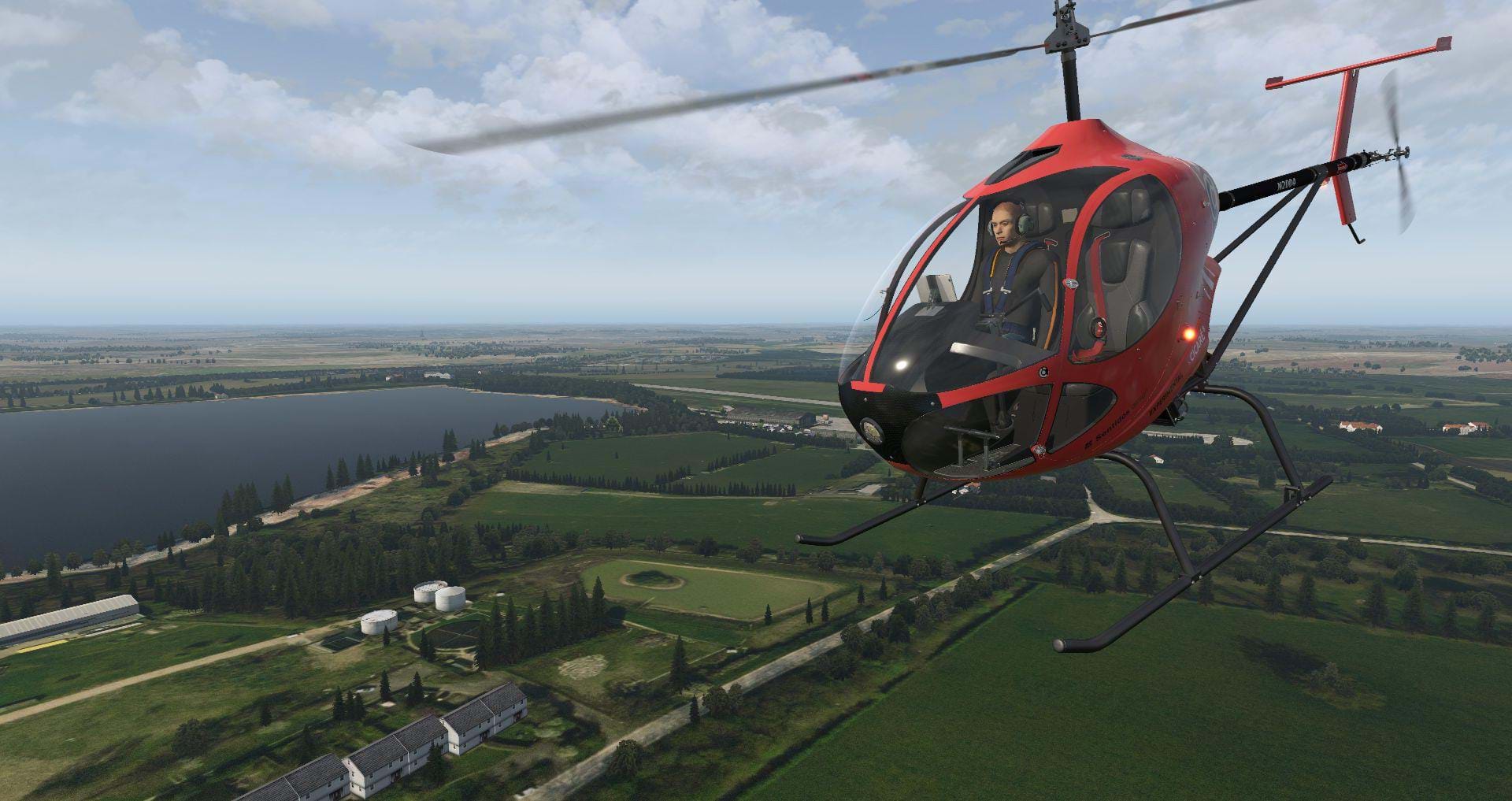 VSKYLABS’ recent release, along with the Mini-500 [/reviews/vskylabs-mini-500-x-plane-11-30] is another one of those models that nearly no one heard about, but it’s just the thing that I imagine the company developing.

The original Cicaré8 is an experimental aircraft. An ultralight helicopter, developed by the Argentinian company Cicaré, founded by Augusto Cicaré [ http://www.cicare.com.ar/en-augusto-cicare.html] which, in 1958 built the company’s first helicopter, the CH-1. This was the first helicopter to ever be developed and built in South America. 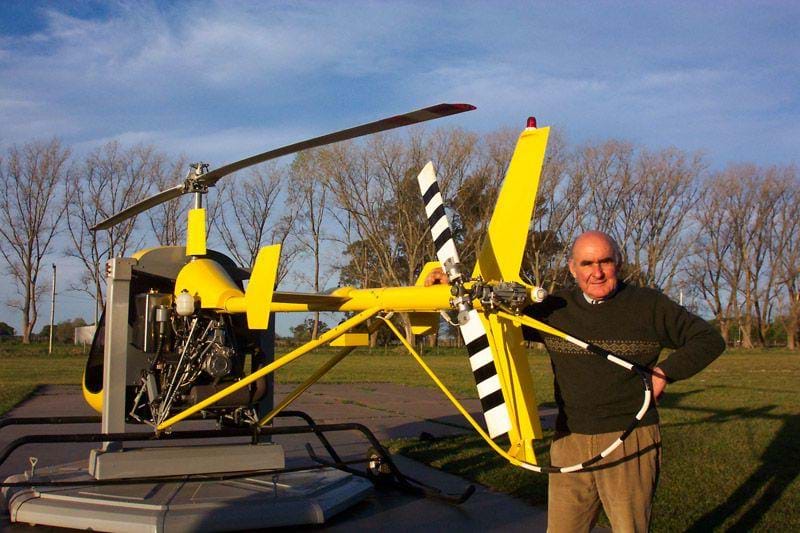 The story behind Augusto Cicaré and the company is one of passion for mechanics and helicopters. In 1994 the company has built a revolutionary training simulator where a mockup helicopter is attached to a base that didn’t allow it to rollover or crash.

Fast forwarding quite a few years (over 60 years after their first helicopter came out) and Cicaré has released their Cicaré8, using all the latest techniques and materials available.

And VSKYLABS picked it up and brought it to live for X-Plane.

Before I get into the virtual rendition of the model, I think it’s worth noticing what VSKYLABS posted on the product website page [ https://www.vskylabs.com/vsl-cicare-8]:

The VSKYLABS development of the Cicare-8 project for X-Plane flight simulator was acknowledged by Cicaré S.A. However, it is an independent VSKYLABS project which is not related, affiliated and/or endorsed with Cicaré S.A.

This is something VSKYLABS prides itself of doing for a lot of their projects: they reach out to the manufacturers and, despite the fact that there’s no actually providing any direct input, they are still aware of the project – and I imagine they could be providing some data or more detailed information where required. But I am speculating here.

Let’s dive into this little helicopter, shall we?

Installation is a breeze. Purchase, download, drag and drop it into your aircraft folder (or inside a subfolder if you prefer to further organize your stuff) and off you go.

VSKYLABS aircraft (well, the latest releases at least) come with a plugin called STMA_AutoUpdate, which automatically verifies the latest version and installs it for you. If you ever get a new version, the plugin will warn you and you just have to restart the aircraft.

It's a great way to keep your aircraft up-to-date and, considering how often VSKYLABS updates and tweaks their products, a very welcome feature as well. 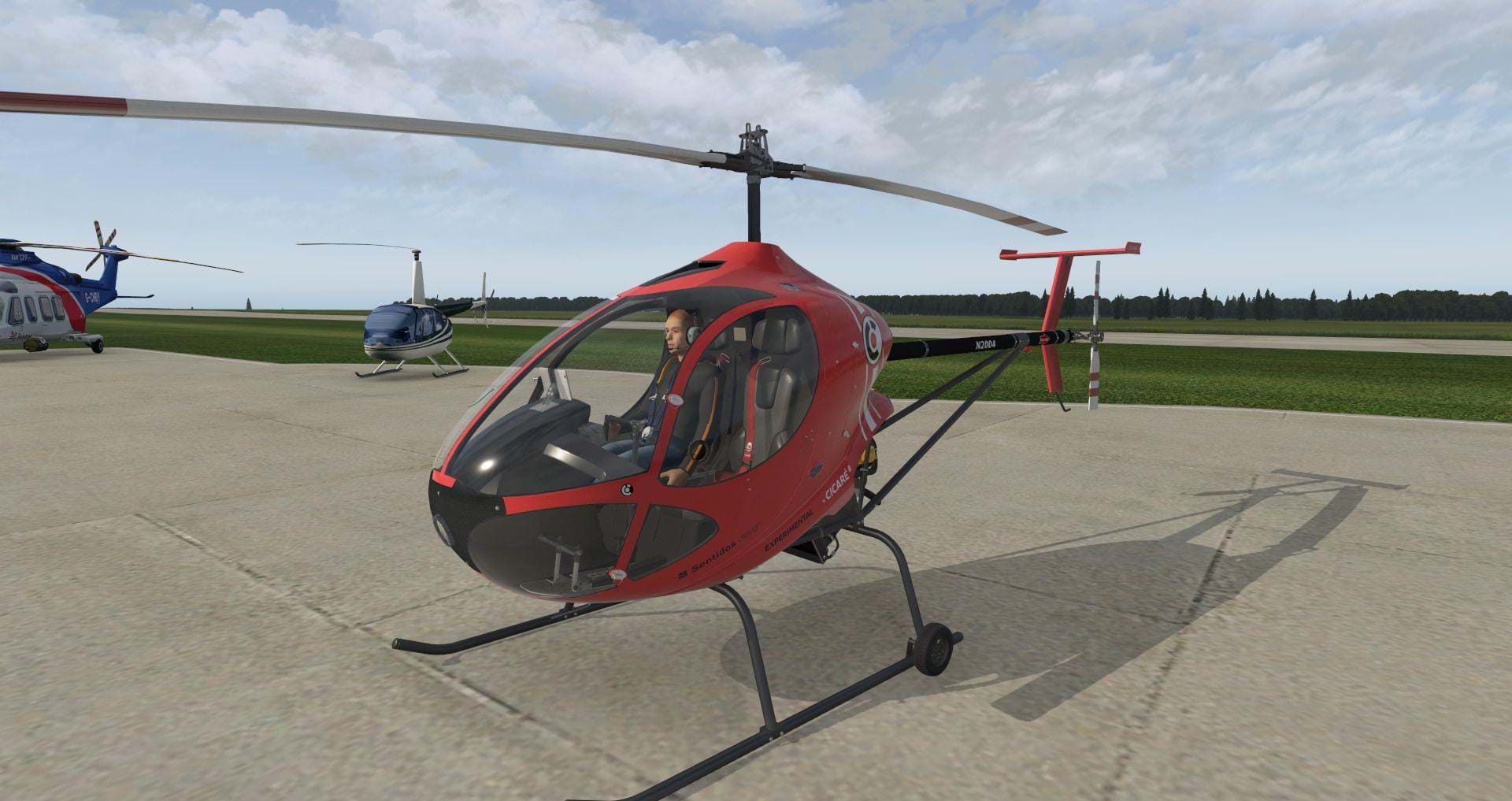 VSKYLABS did a brilliant job with the model, which looks superb.

The Cicare8 is not a complex helicopter but its shape is all but conventional. The modern design of the fairing is beautifully streamlined, and the model shows all those amazing shapes in its full glory.

The engine is perfectly visible from the outside and VSKYLABS modelled it with a high amount of detail. 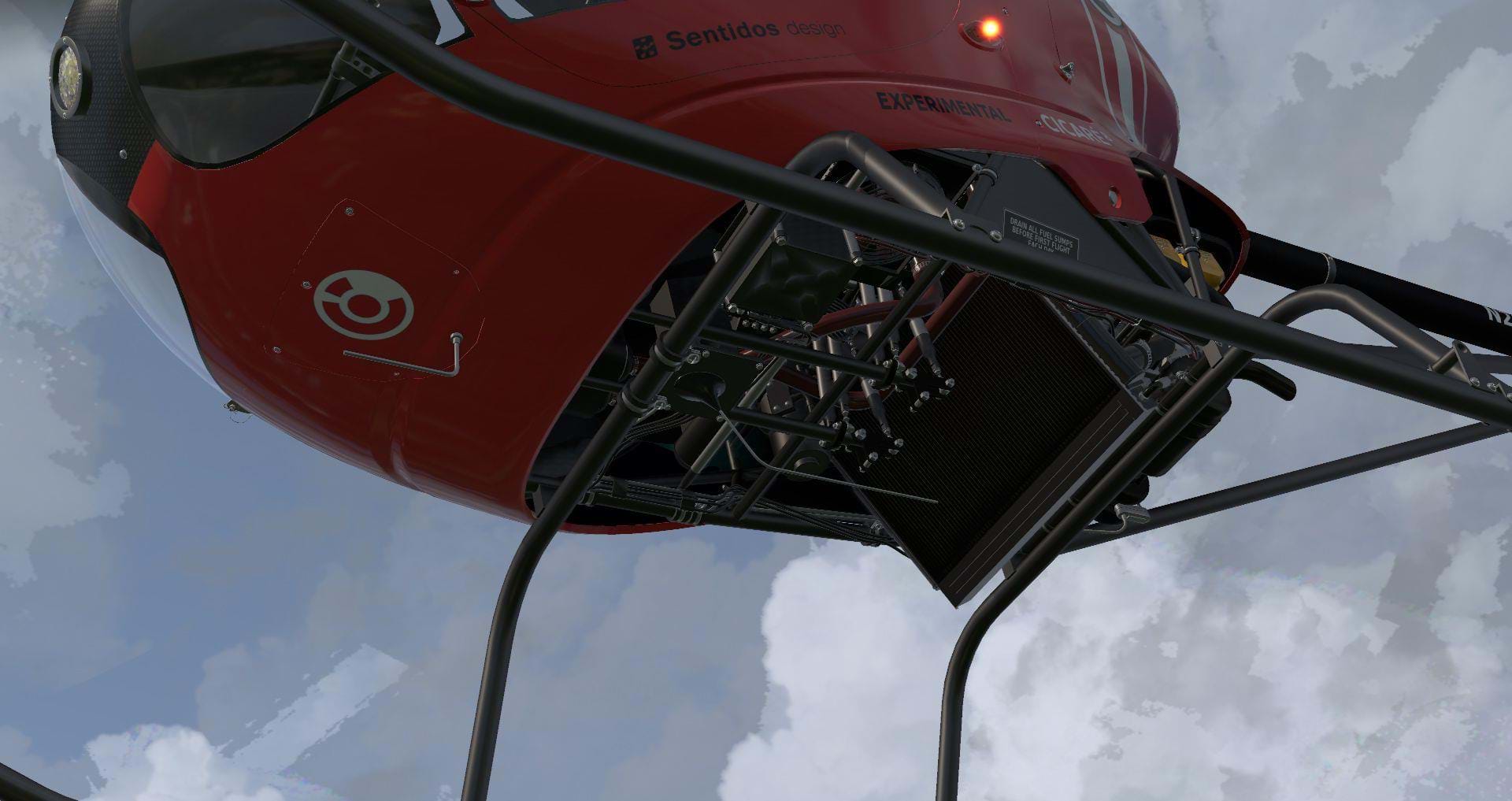 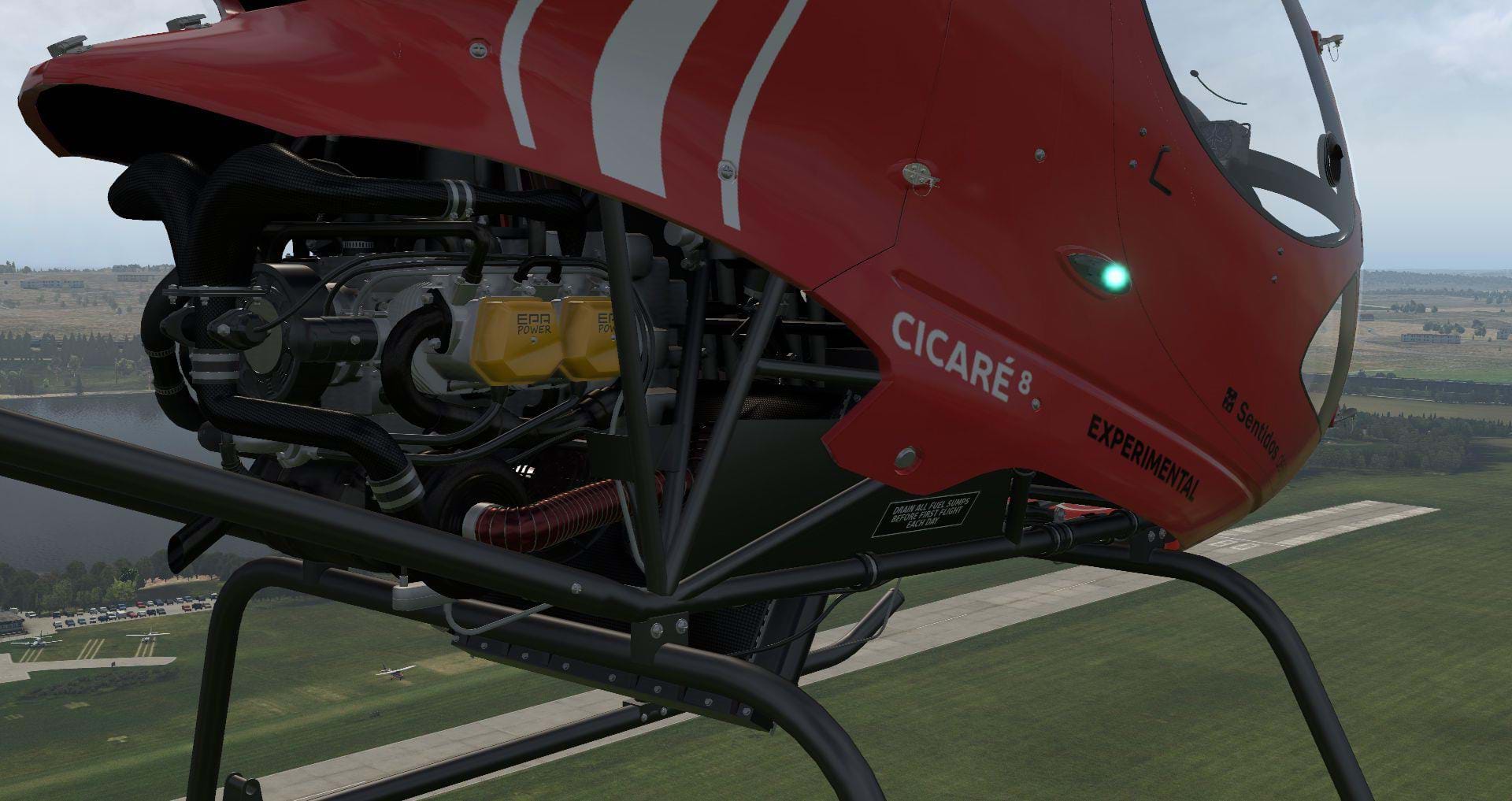 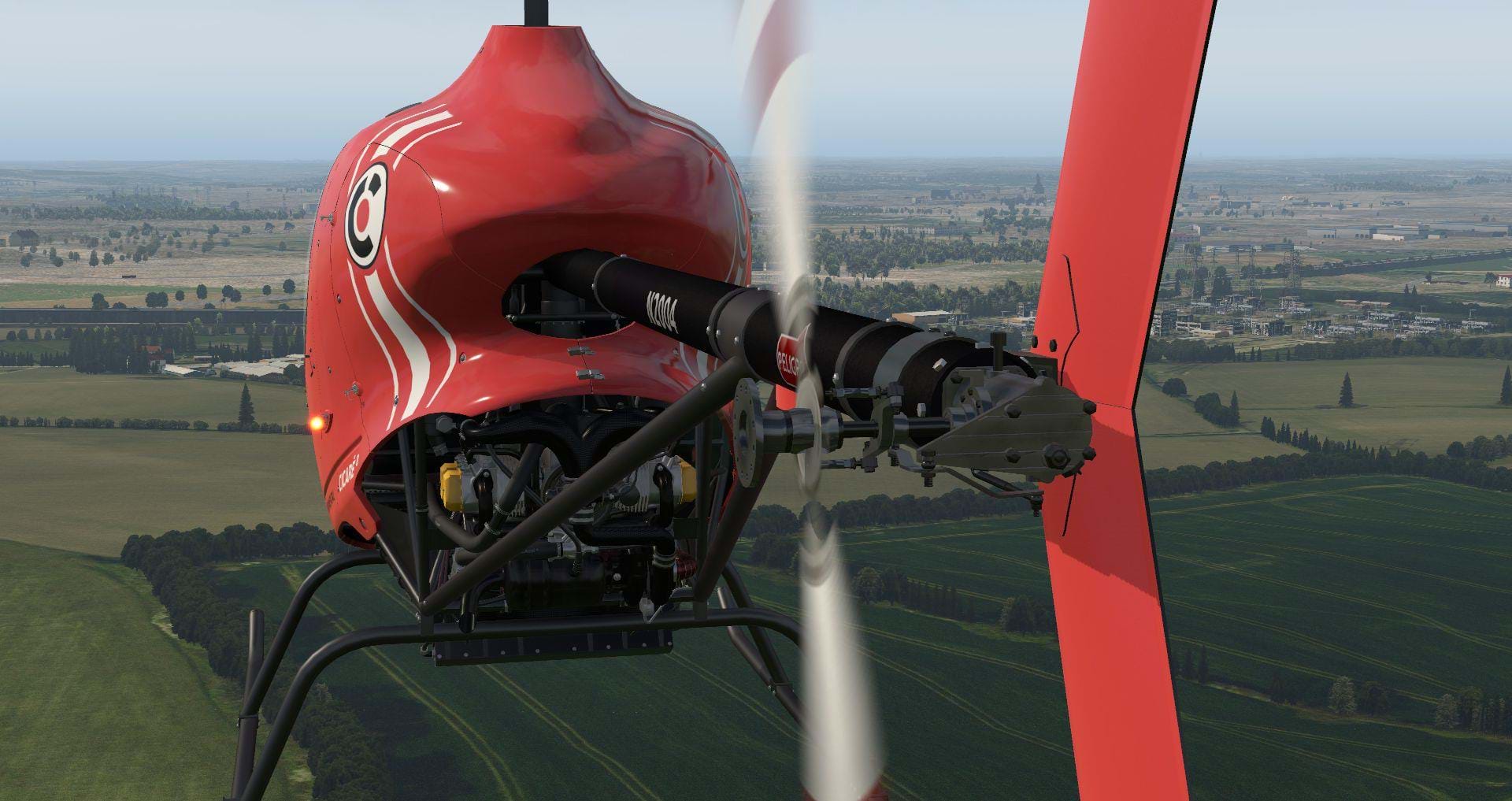 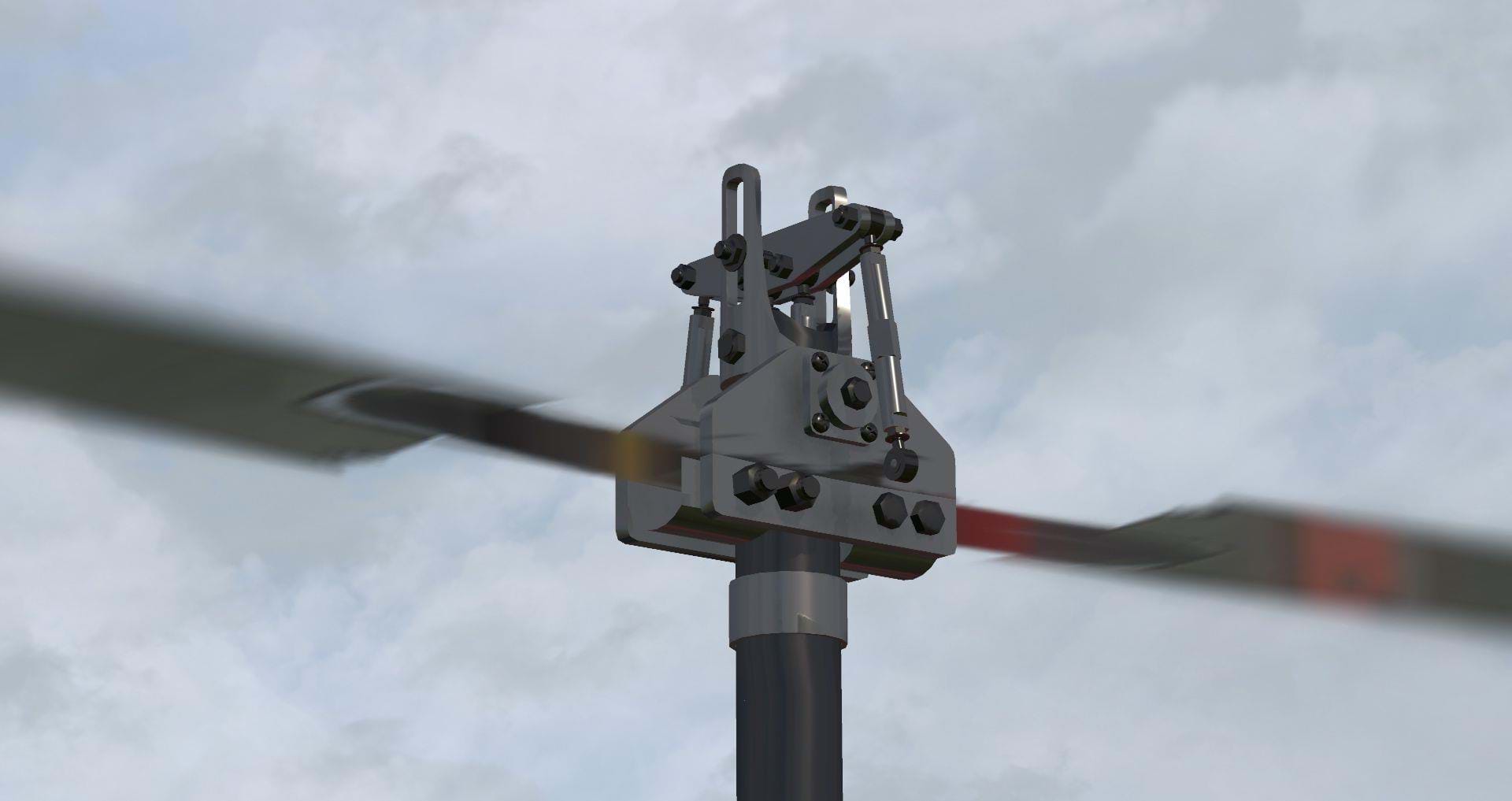 All the little details are there, and the model looks quite impressive and similar to its real counterpart. There are no blatant issues or errors. 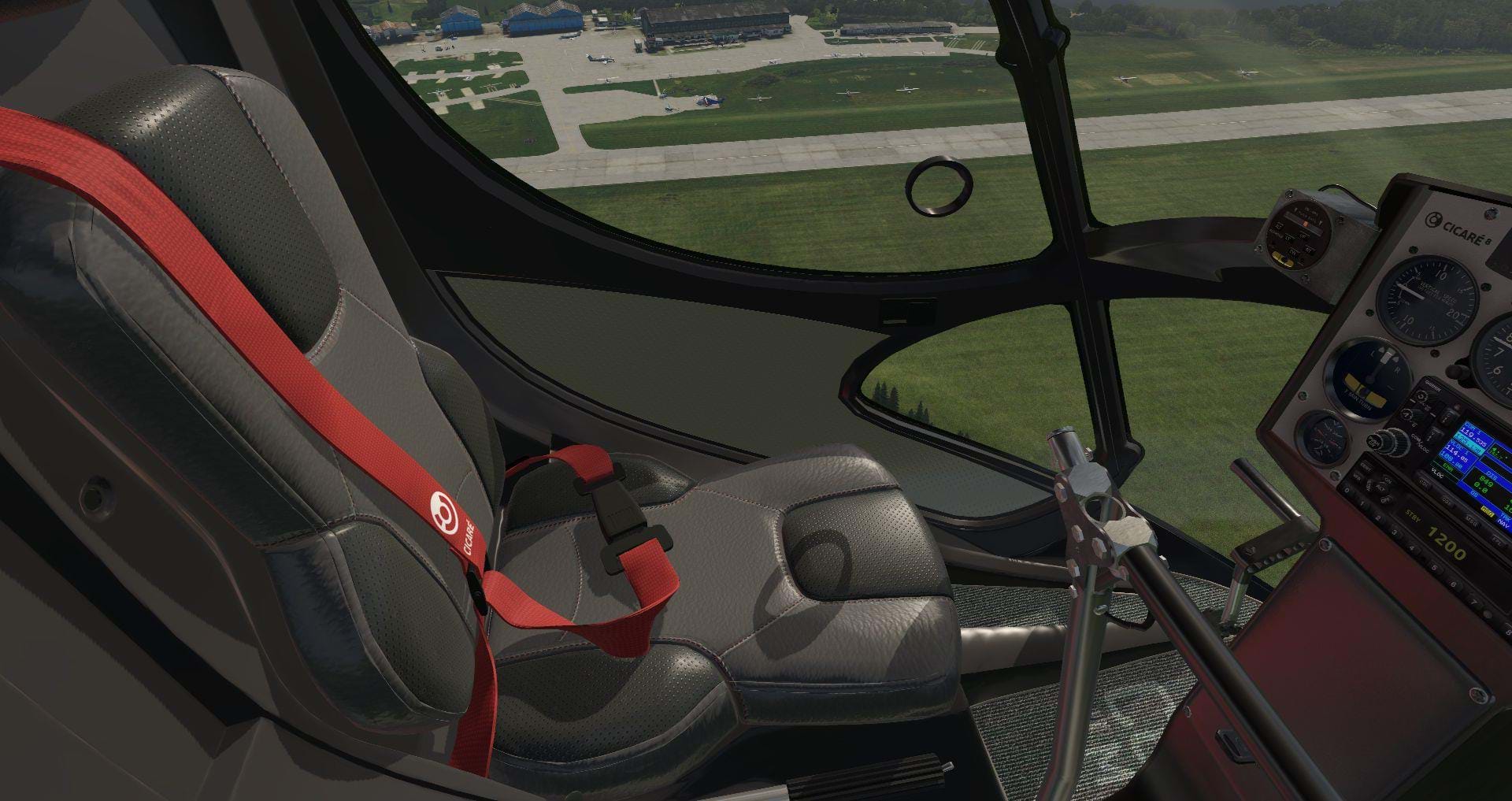 As with the exterior, the interior of the Cicare8 is wonderfully modeled and textured. The helicopter has a very modern and beautiful interior that VSKYLABS replicated, again, very well.

I don’t know if it’s the helicopters they chose or if there’s a “VSKYLABS” touch to is, but all cockpits they build make me feel cozy and comfortable inside – especially in VR. This one is no exception. 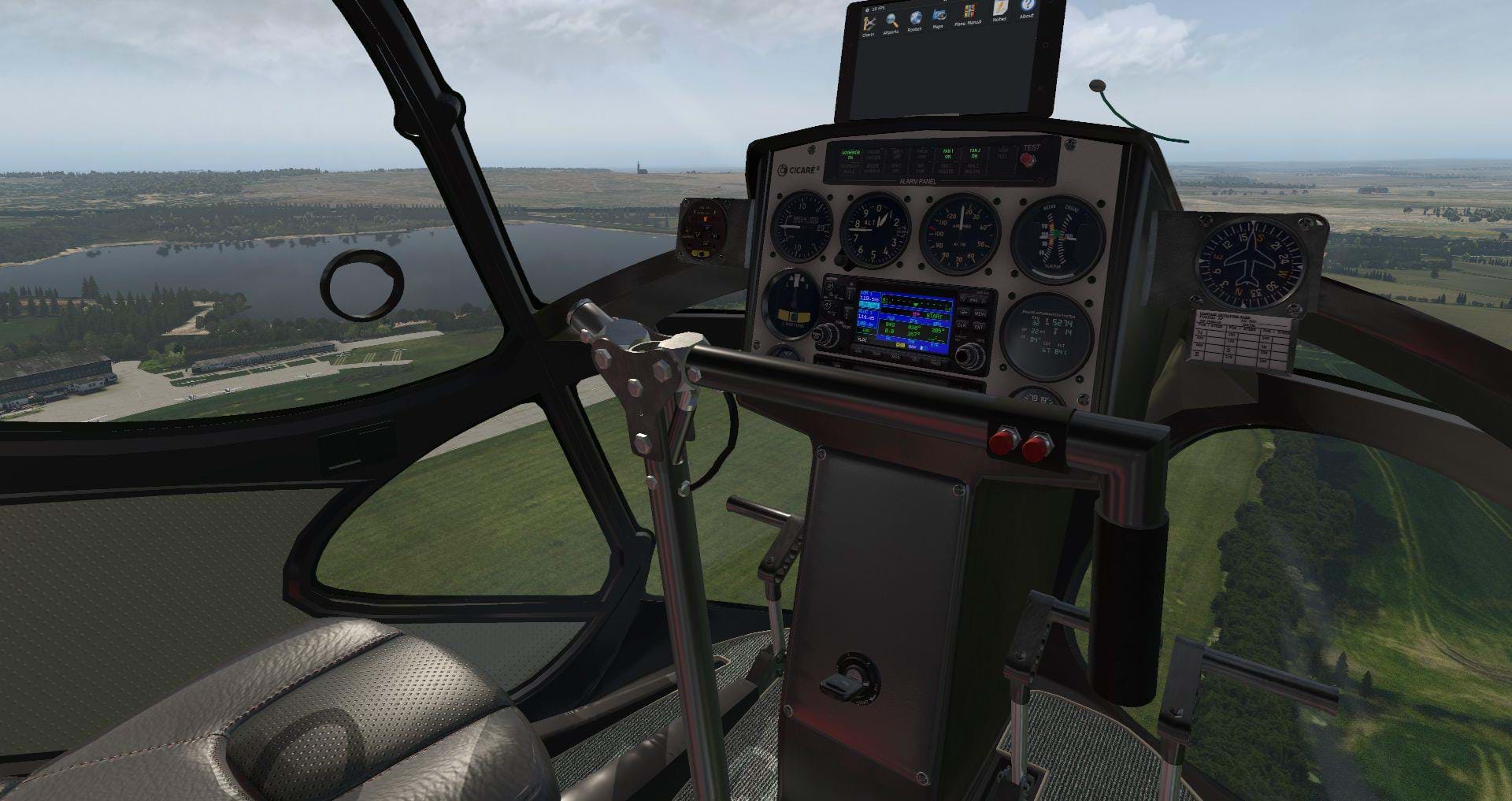 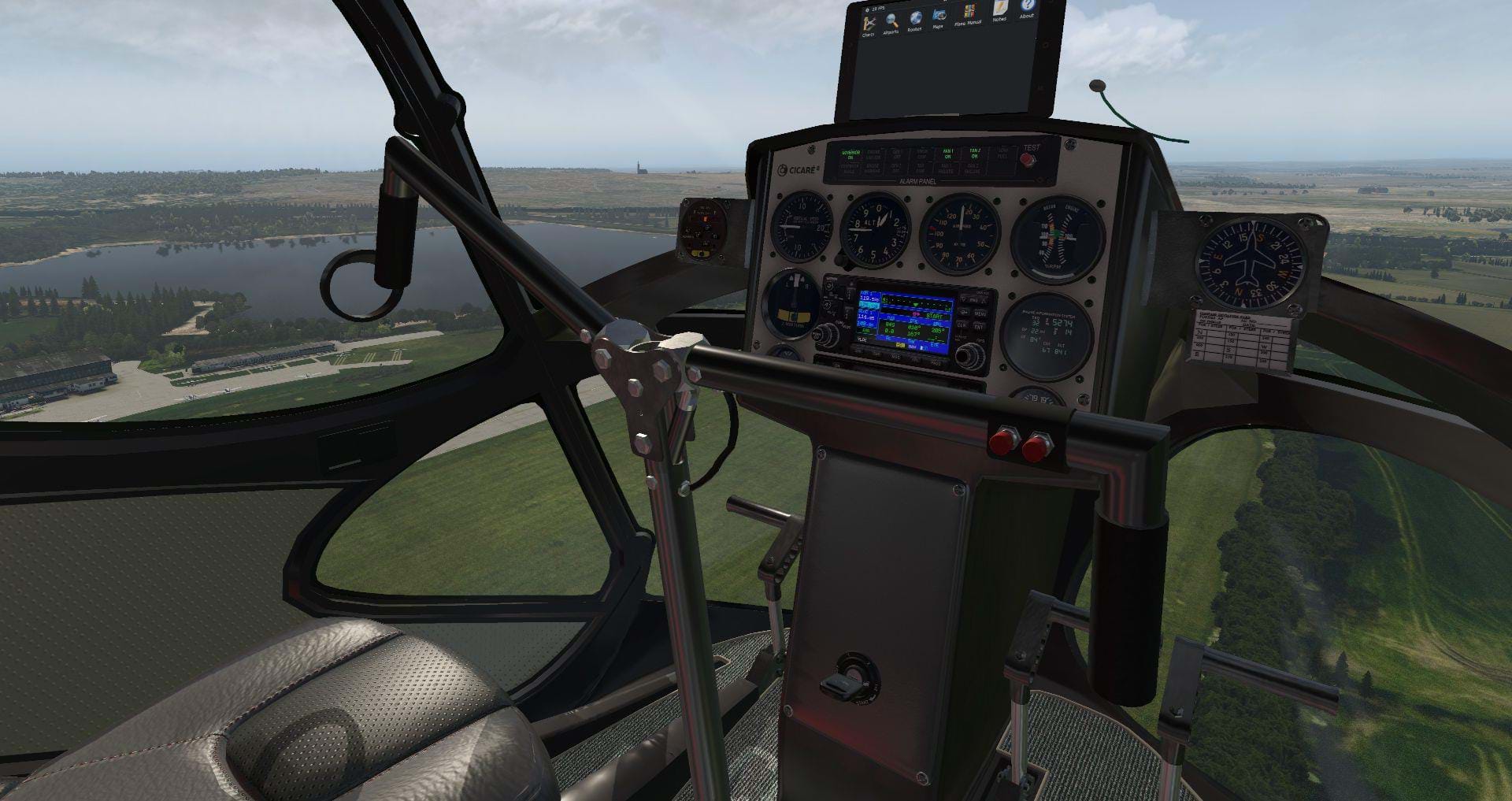 The cyclic is similar to the system Robinson uses, in a “Y” shape, centrally positioned in the cockpit. We can remove the left portion of the cyclic, leaving only the one for the pilot.

The Cicare8 panel is not very complex. It’s comprised of an annunciator panel on the top and it has some basic instruments with the GPS taking the center stage. 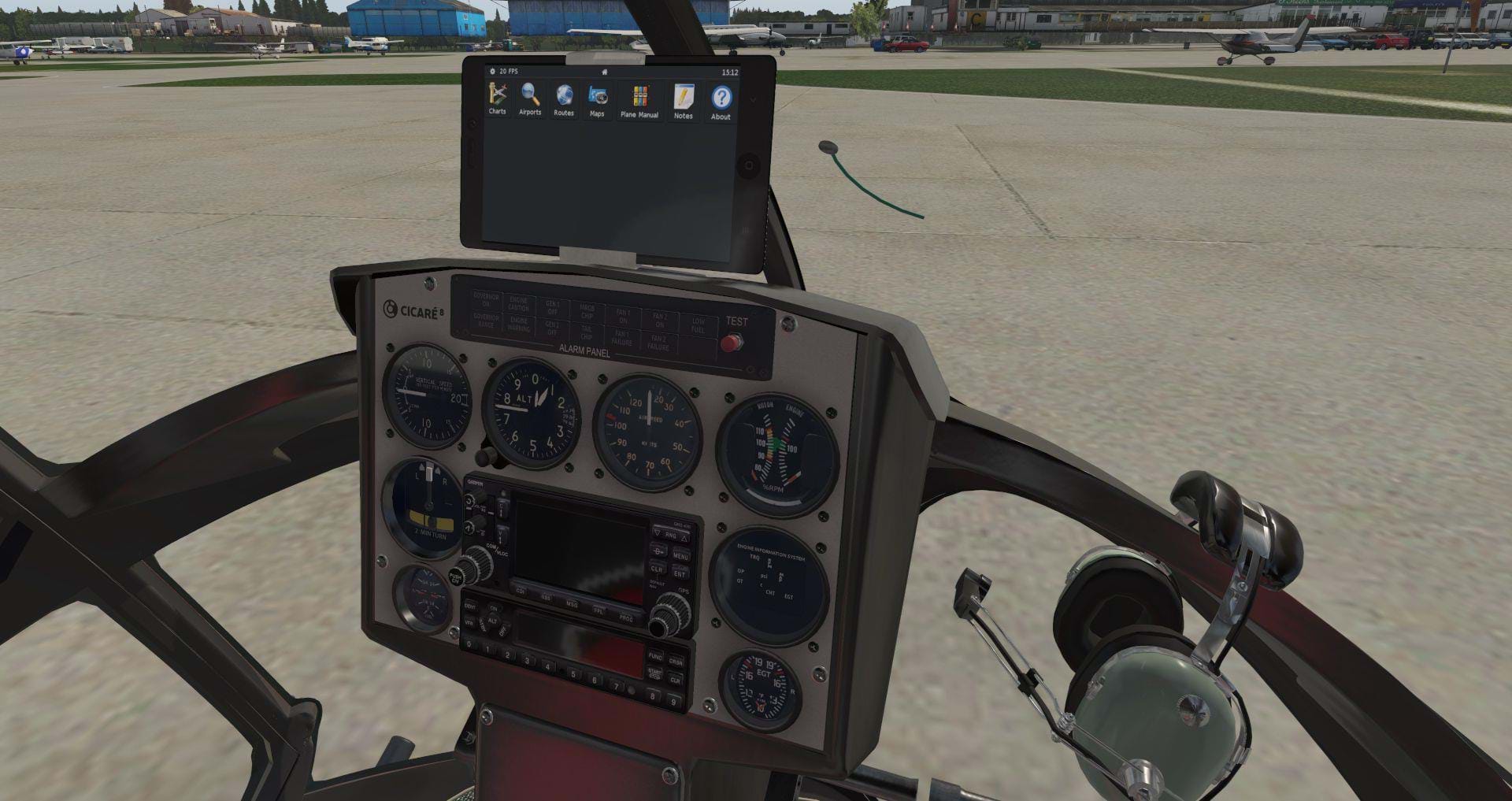 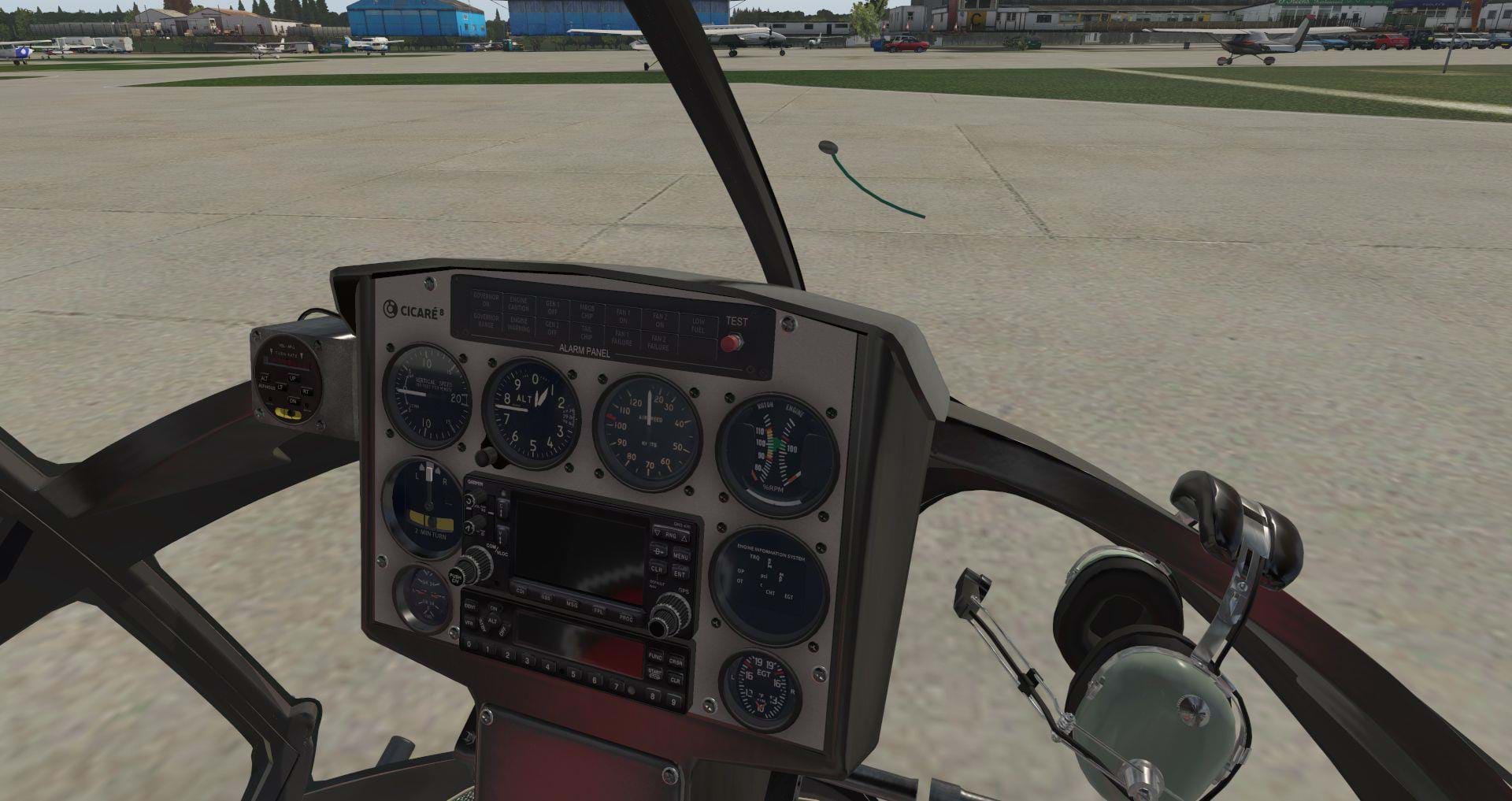 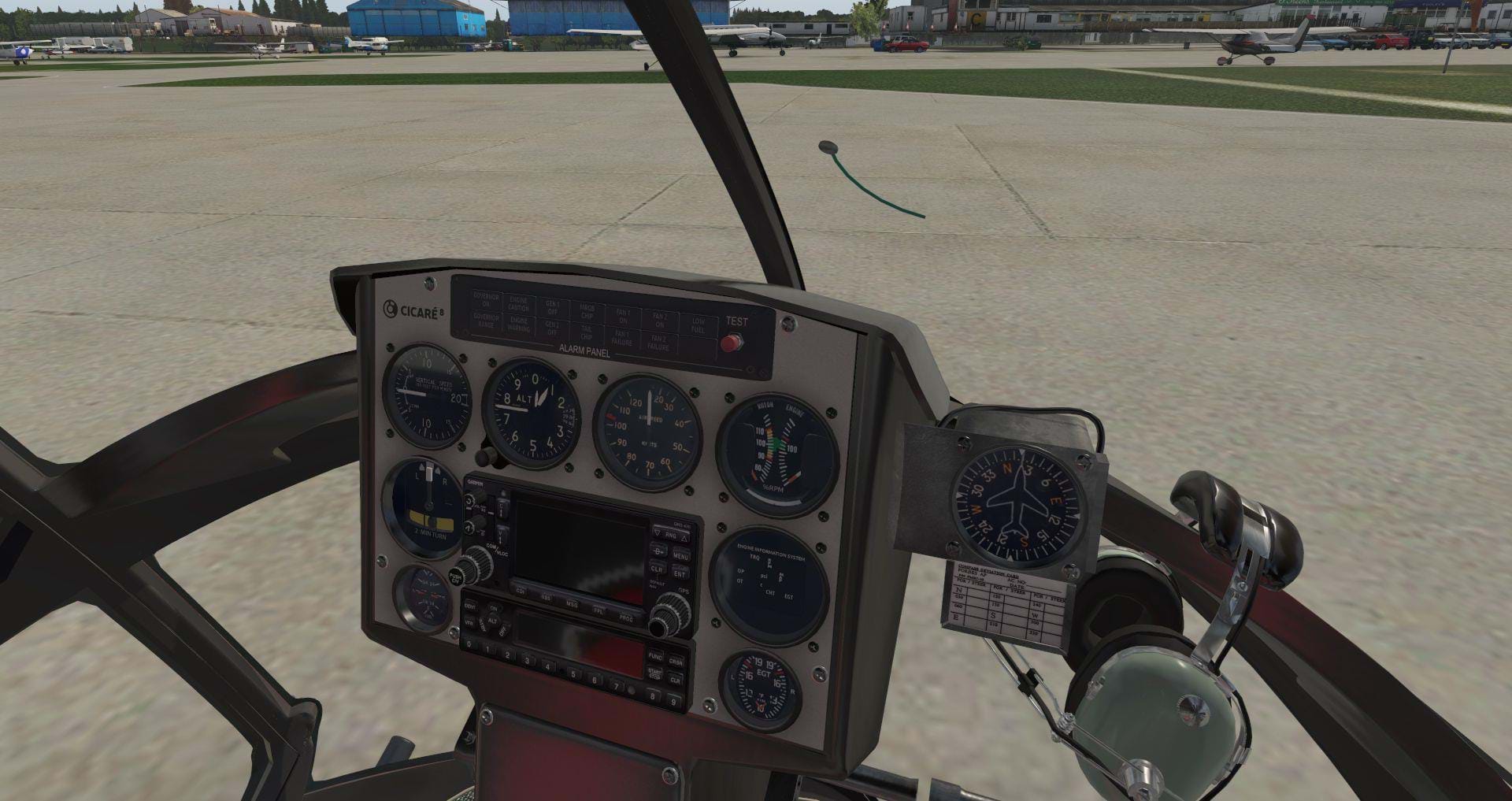 VSKYLABS added 3 extra instruments. Their own autopilot gauge, which can be added to the left of the menu, if you click on that region, a compass, which you can place on the right and the Avitab tablet, placed on top of the panel.

Just like the cockpit, systems of this little helicopter as simple. The startup procedure is rather straightforward. It’s not as simple as pressing a couple of buttons but not extra complex either.

Everything works as it should, which is expectable in such a simple helicopter.

VSKYLABS did a great job with the sound system again. I have never listened to a Cicare8 in person, but I watched some videos to get a feeling of how it looks and sounds, and it seems on point to me. There’s not a lot more to say about it, honestly.

The Cicare8 was built to be used with VR right from the start. You can grab the controls with your VR controllers if you want to and all the controls were set up so that they are easy to use.

No issues here and she’s absolutely great to fly in VR. The outside view is very good, the position inside the cockpit comfortable and, because of how well it’s crafted, it’s beautiful to look at.

Being a small, light helicopter, I was expecting her to be a bit too unstable. Not knowing how the real one behaves, I can’t attest to the fidelity of the flight model. 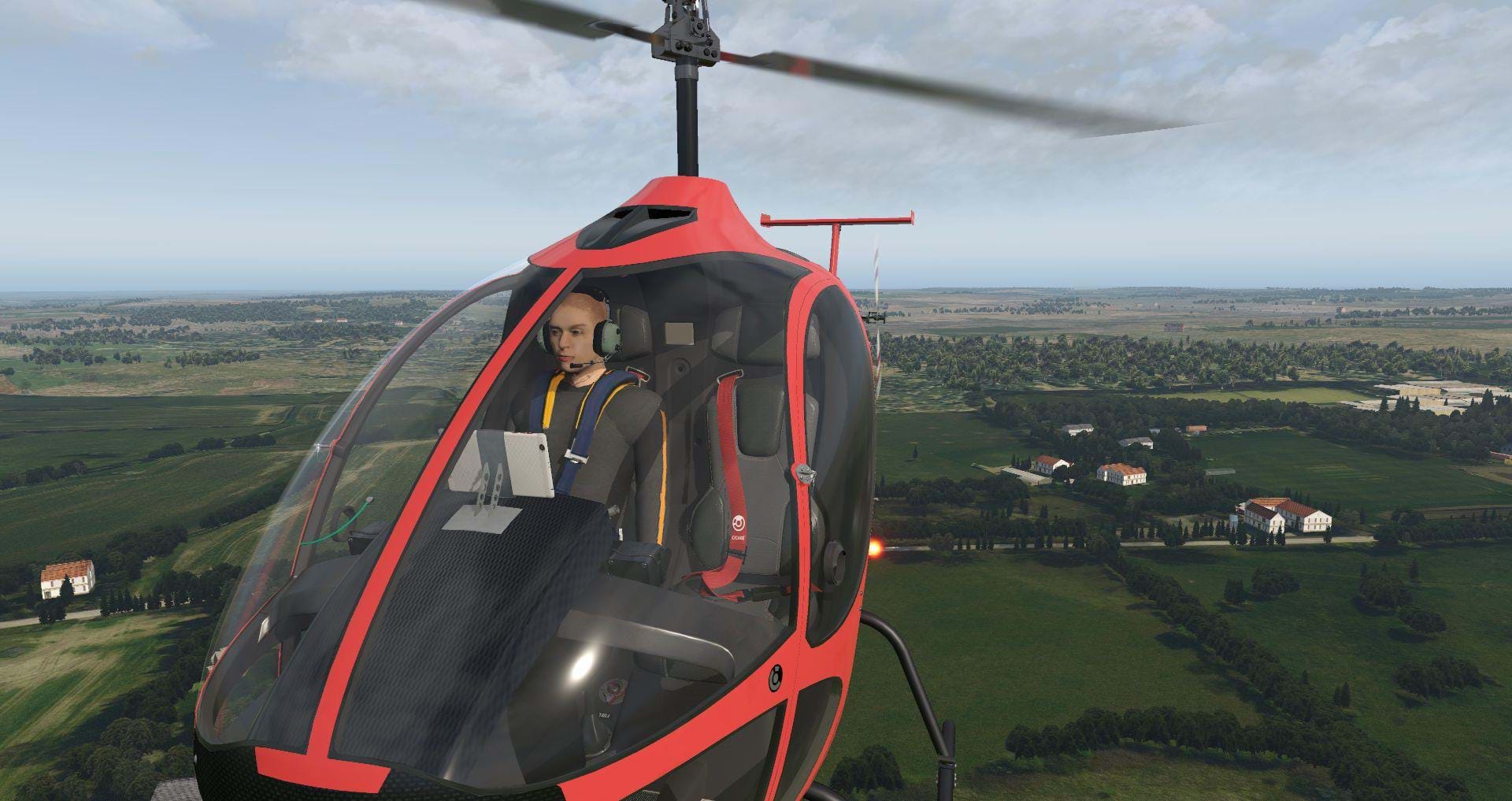 Nonetheless, considering the size and weight of the helicopter, and the fact that it’s a modern design, built using recent techniques and materials, the “feel” seems good to me. She’s nimble, but not enough to be uncontrollable. I was never all over the tarmac with her. I needed to be on top of things, but it wasn’t something that would get me tired after a while.

VSKYLABS has a philosophy of not making their models hard in a way that they are unusable by newcomers. The Cicare8 sure doesn’t feel like that. She’s a bit challenging but controllable. Enough so that even a newcomer can learn with her. But you still need to be careful because she will bite if you let her go free. 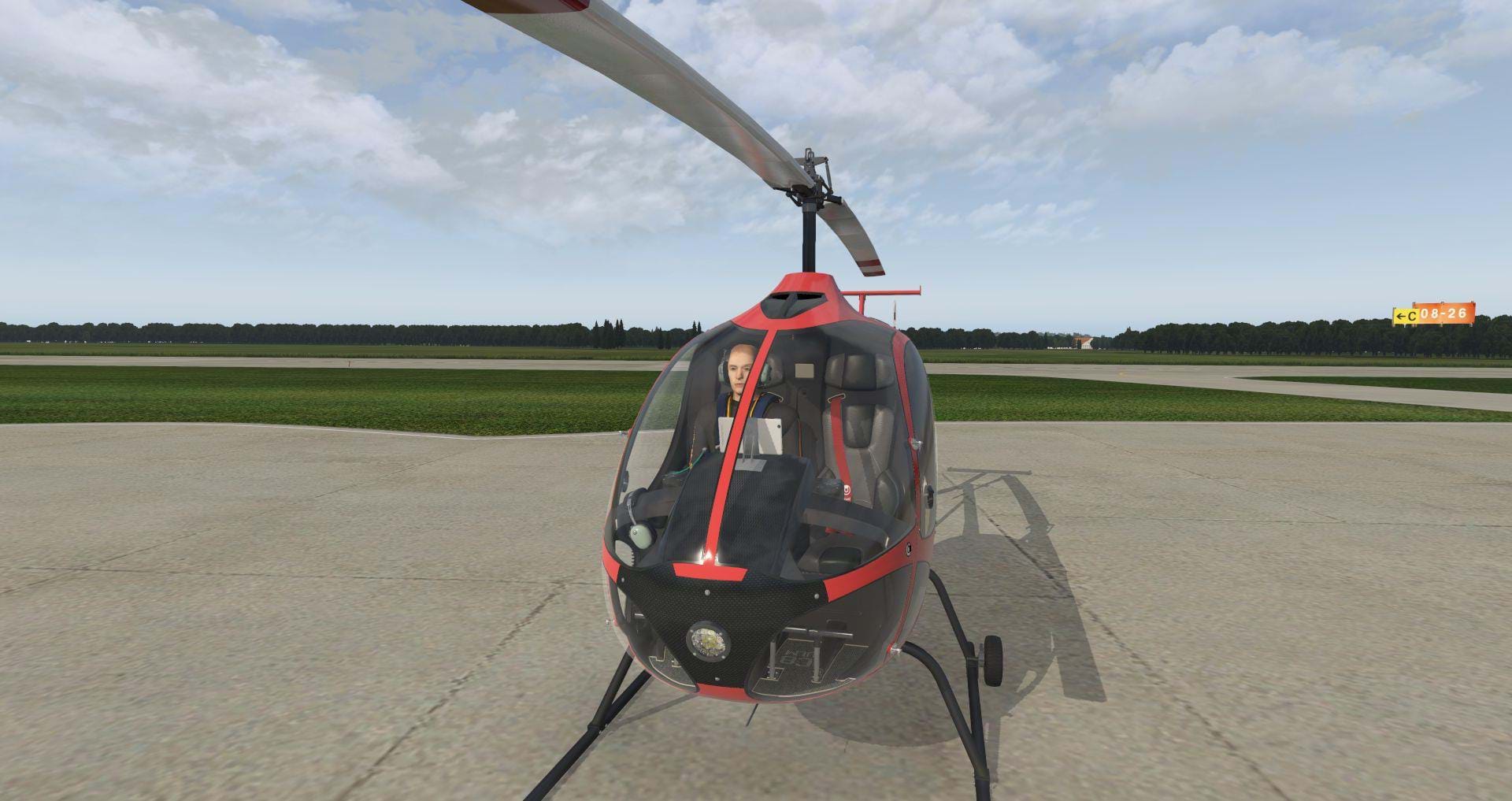 The VSKYLABS Cicare8 is an impressive little helicopter that I am enjoying a lot. I am usually not a fan of the ultralight class of aircraft but VSKYLABS draws me in easily with their designs.

I am spending more time in it than I thought I would. She’s fun to fly, the cockpit is beautiful, and she feels like a small air-taxi.

If you’re looking for a new helicopter, make sure this one is on your list.

The Cicare8 is just another great product all around and the proof that when VSKYLABS releases something, you always know what to expect: good quality all around and something very fun to fly with.

Installation 10
Textures 9
Frame rate impact 10
Sound 9
Systems 10
Model 9
Flight dynamics 9
Total score
9.5
* The above final rating is calculated from a weighted average and not the direct arithmetic average. This means that some elements of the review will have a higher influence in the final score than others.
Click here to purchase/download or more information