VIRPIL sells their joysticks a bit differently from other manufacturers and you’ll have to select a base and the grip. But you can also add an extension to it, which may help you.

Let me start with the disclaimer you will see on all these VIRPIL reviews: all these items were sent to me by VIRPIL. But, rest assured, I will be completely unbiased and totally honest with both you and VIRPIL. If something is not right, I will call it. But if it is, I will obviously say so as well.

That may sound a bit weird. Having to buy a joystick in parts it’s not something people may be used to. It’s like buying a car chassis and the body separately.

But it kind of makes sense if the manufacturer is offering different combinations of products. Not that VIRPIL is offering a lot of different bases. In fact, they only have 2 in their catalog, but they are quite different (and so is the price).

If you’re wondering about them, you can find my review on one of the bases, the VPC MongoosT-50CM2 Base.

No joystick is complete without the grip, obviously, so I will be taking a look at the VPC MongoosT-50CM2 Grip. 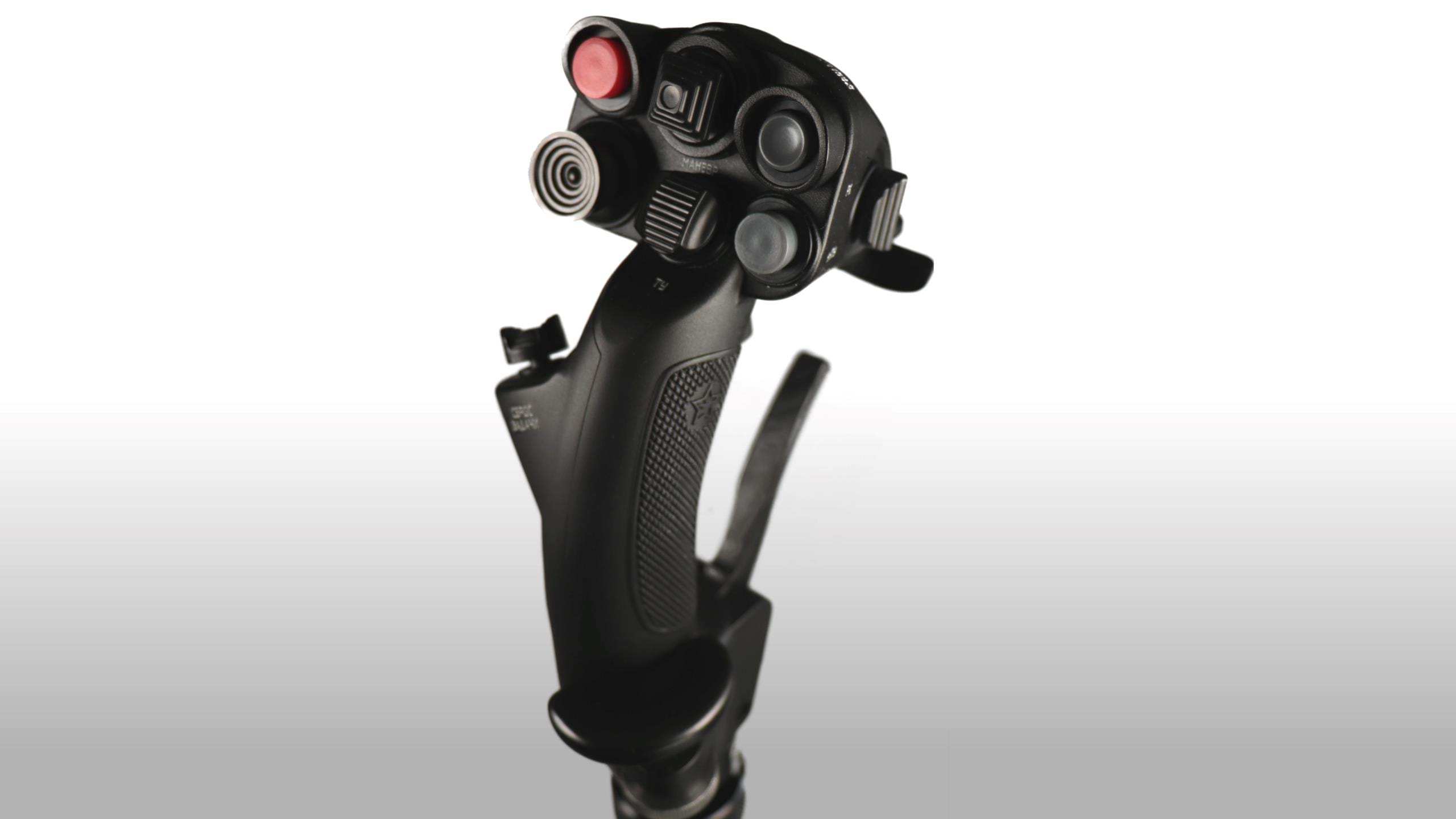 The MongoosT-50CM2 Grip is BIG. From top to bottom, this thing is about 25cm (a bit less than 10 inches) in height.

Being made of what seems to be injected plastic, it’s not a heavy unit but it feels sturdy. On the bottom, we find the ring that screws onto the grip base and the 5-pin mini-DIN, which, again connects to the base.

The grip feels very solid, and the plastic has a good feeling to it as well. Ergonomically speaking, I find it comfortable, but I did find that the top buttons and hat may require you to move your hand, not making it easy or fast to access. But I didn’t find it a huge deal.

I had to adapt the side hand rest (for the lack of a better term) on the side for if/when I wanted to rest my hand on it – which is not something I usually do when flying helicopter – but that was an easy process and all I had to do was to adjust the screws on that particular part. Pretty easy. 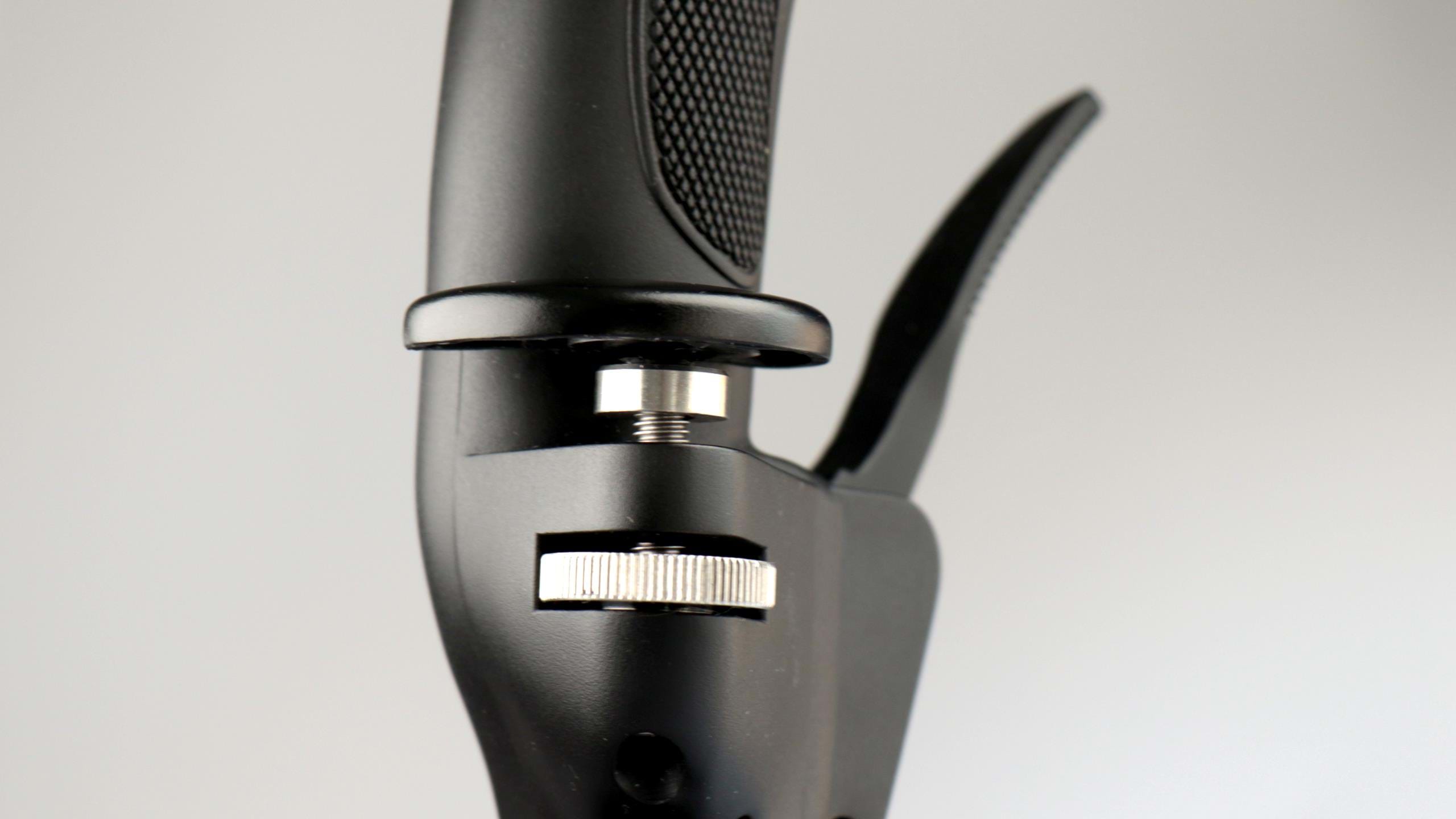 Something that I am sure a lot of you will also like is the fact that we can screw the grip so that it’s angled on the base. You can attach it in any position. All the 360 degrees are yours to us. This allows you to place the grip comfortably and remove any strain from your wrist. 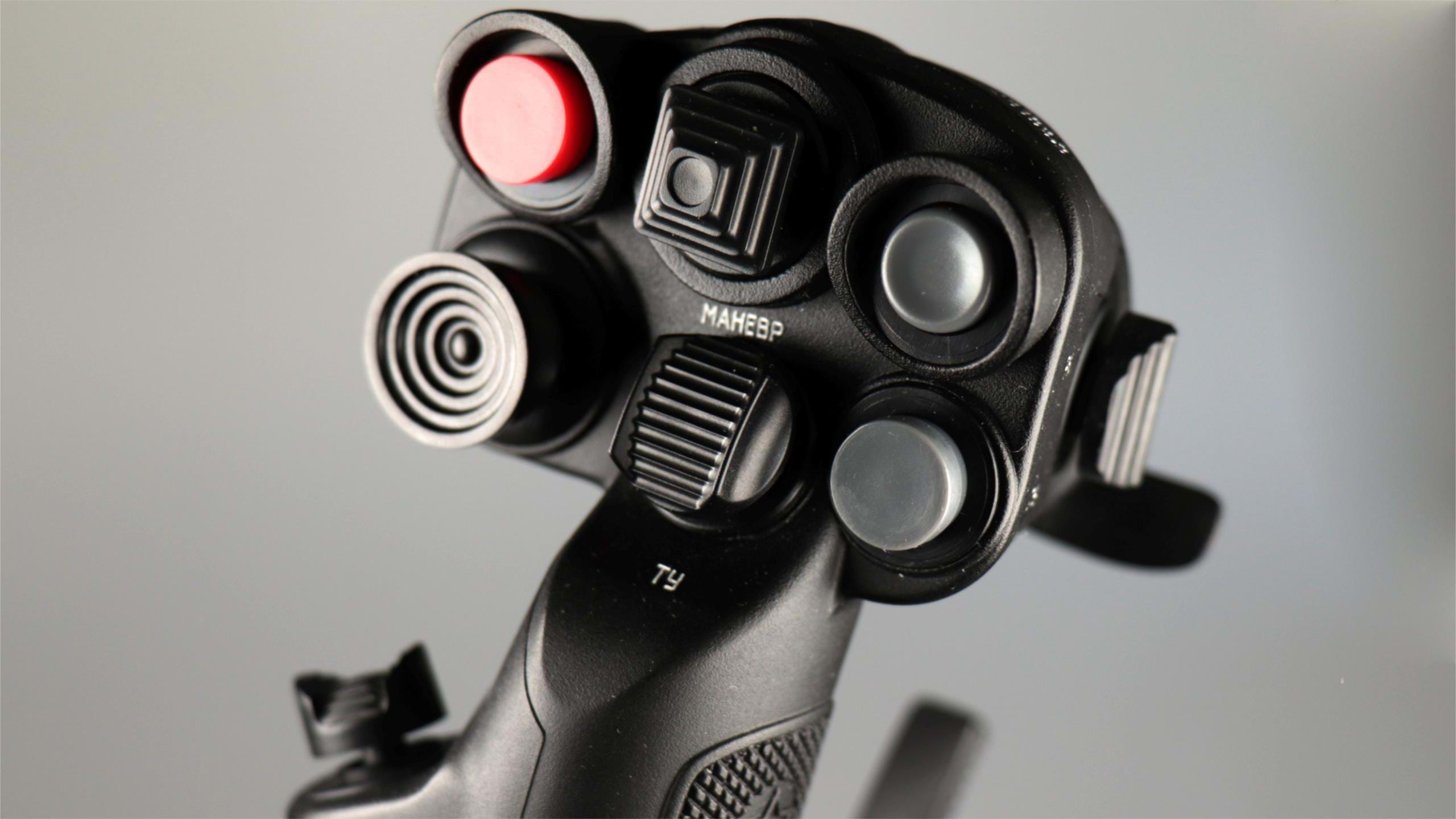 A few things jump immediately to your attention if you look at the MongosT-50CM2 grip.

The more obvious one is the huge lever on the front, which acts as an axis. The other thing is the number of buttons and hats the grip has.

In fact, going through the features list you’ll find the following:

In case you’re wondering about the flip trigger, it’s a small piece in front of the 2-stage trigger. It resembles a trigger-guard, and you can pull it, which will trigger a button push but there’s something else that it does: on its regular position (down), it is constantly triggering a different button push. You can invert this, though, and make it work only when you push it to the front (up position). 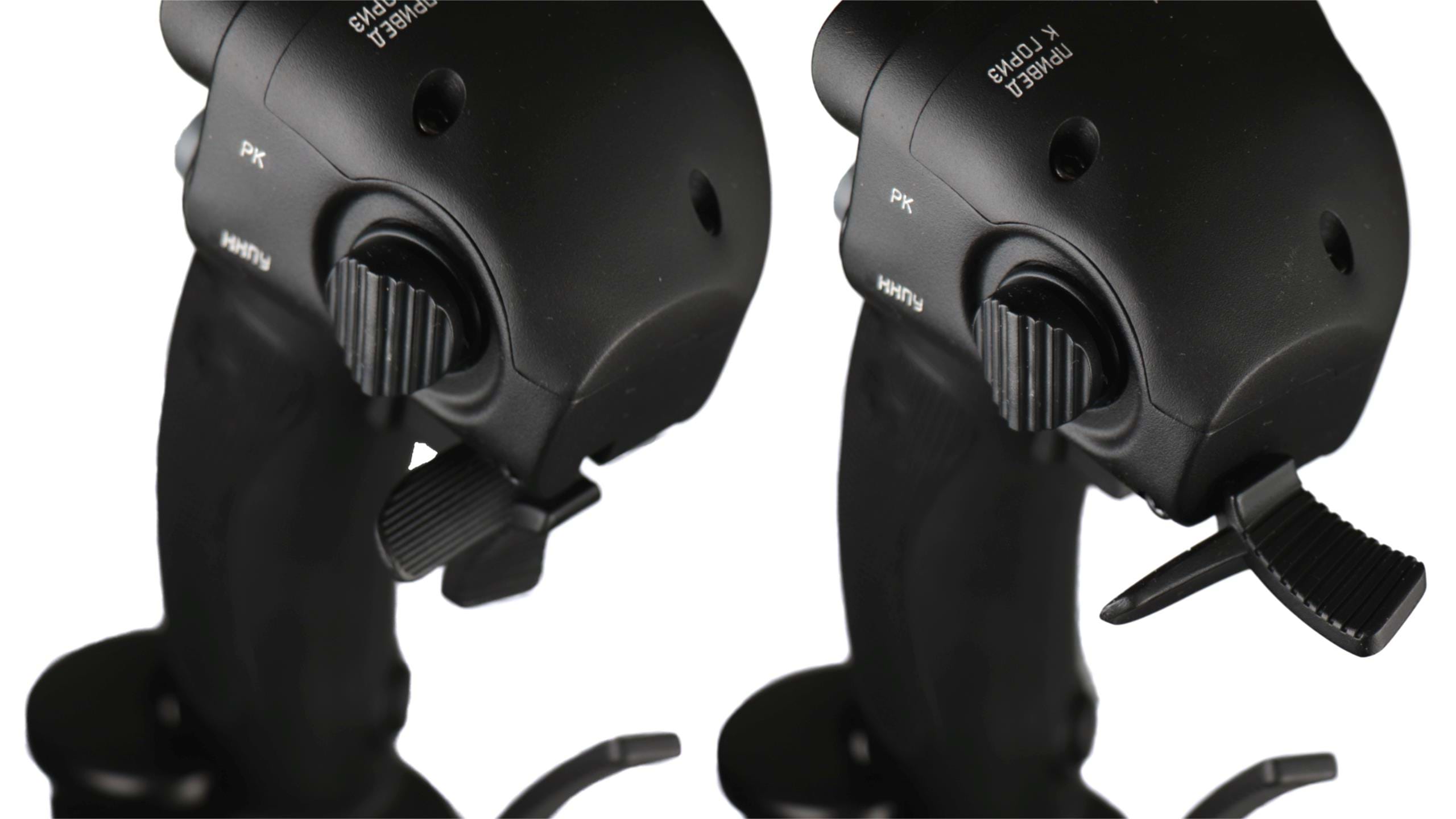 As you can see from that list, though, there are plenty of buttons and switches to use. In total, we get 32 buttons just for the grip!

The brake axis is not just an axis 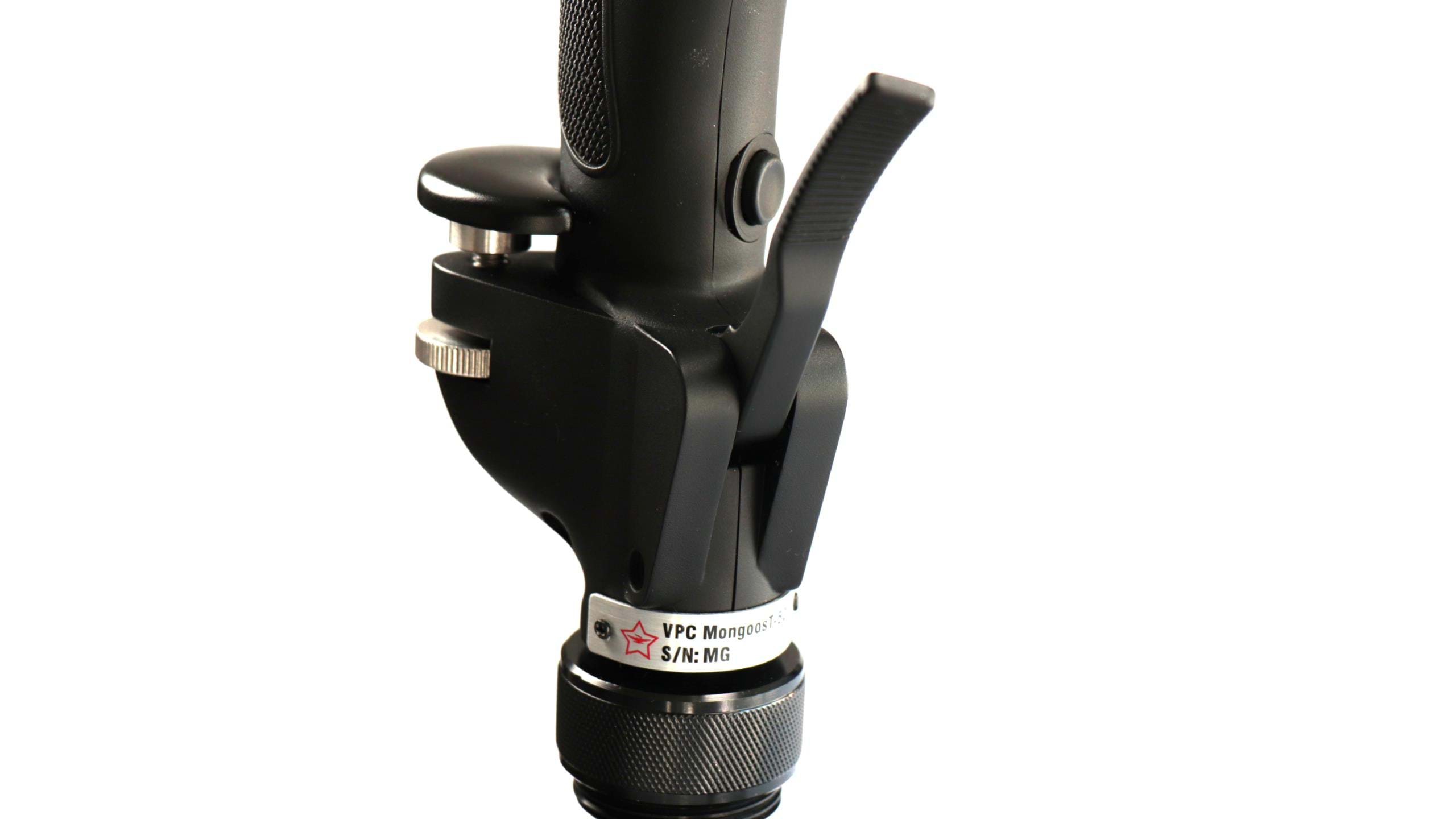 The lever at the front is also recognized as a button as you pull it. So, you can actually double it up, use it as an axis OR a button.

There you go:32 buttons.

Important note: if you have multiple VIRPIL controls, make sure you connect one at a time and set them up separately as to prevent issues, conflicts or even damaging your controls.

Installation was a breeze. I will actually refer you to the VPC MongoosT-50CM Base review as I explain the whole process there.

But, in a nutshell, you install their software, go through the installation process, which allows you to select the base, grip and, if you have it, a panel, and off you go. You are ready to rock! 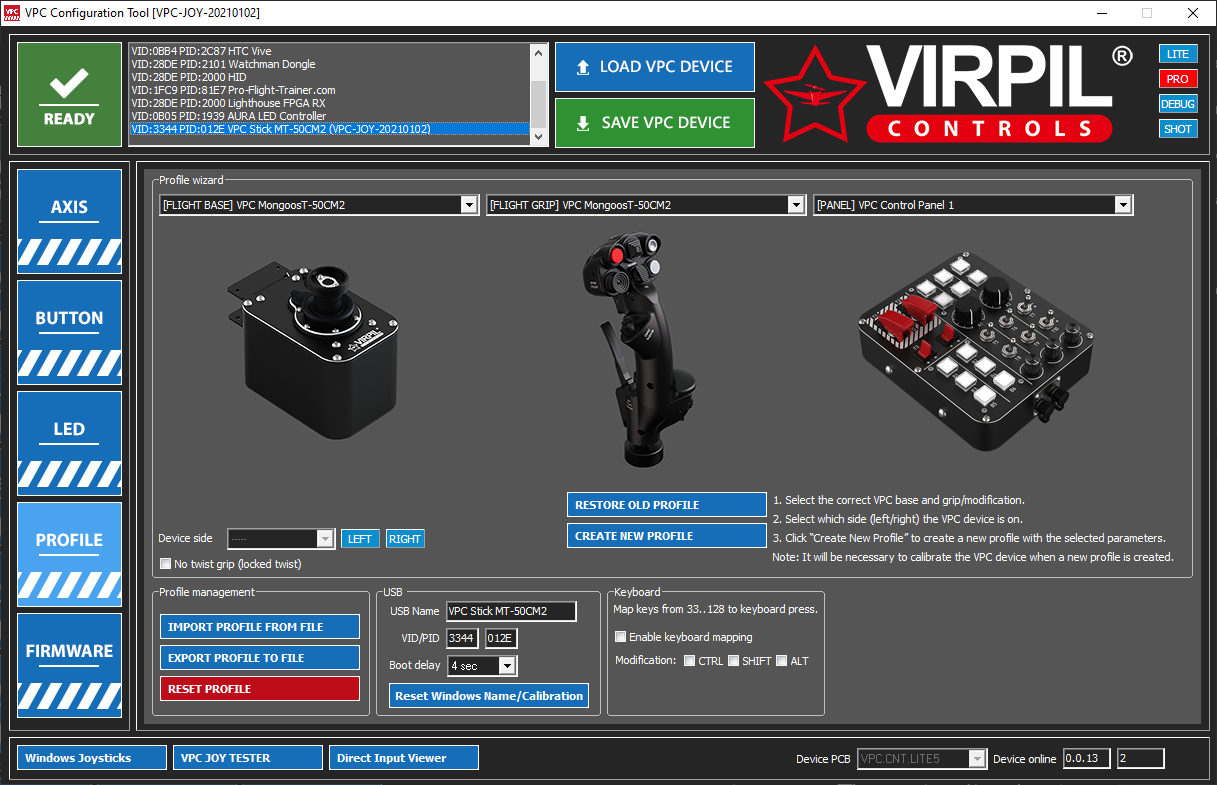 After I installed it, I opened X-Plane, went through the usual calibration process and all buttons and axis were perfectly recognized. Like I mentioned on the base review, all worked perfectly fine.

I set one of the hats to control the trim, another one to release said trim and everything worked as expected. No surprises here, good or bad. It just worked. 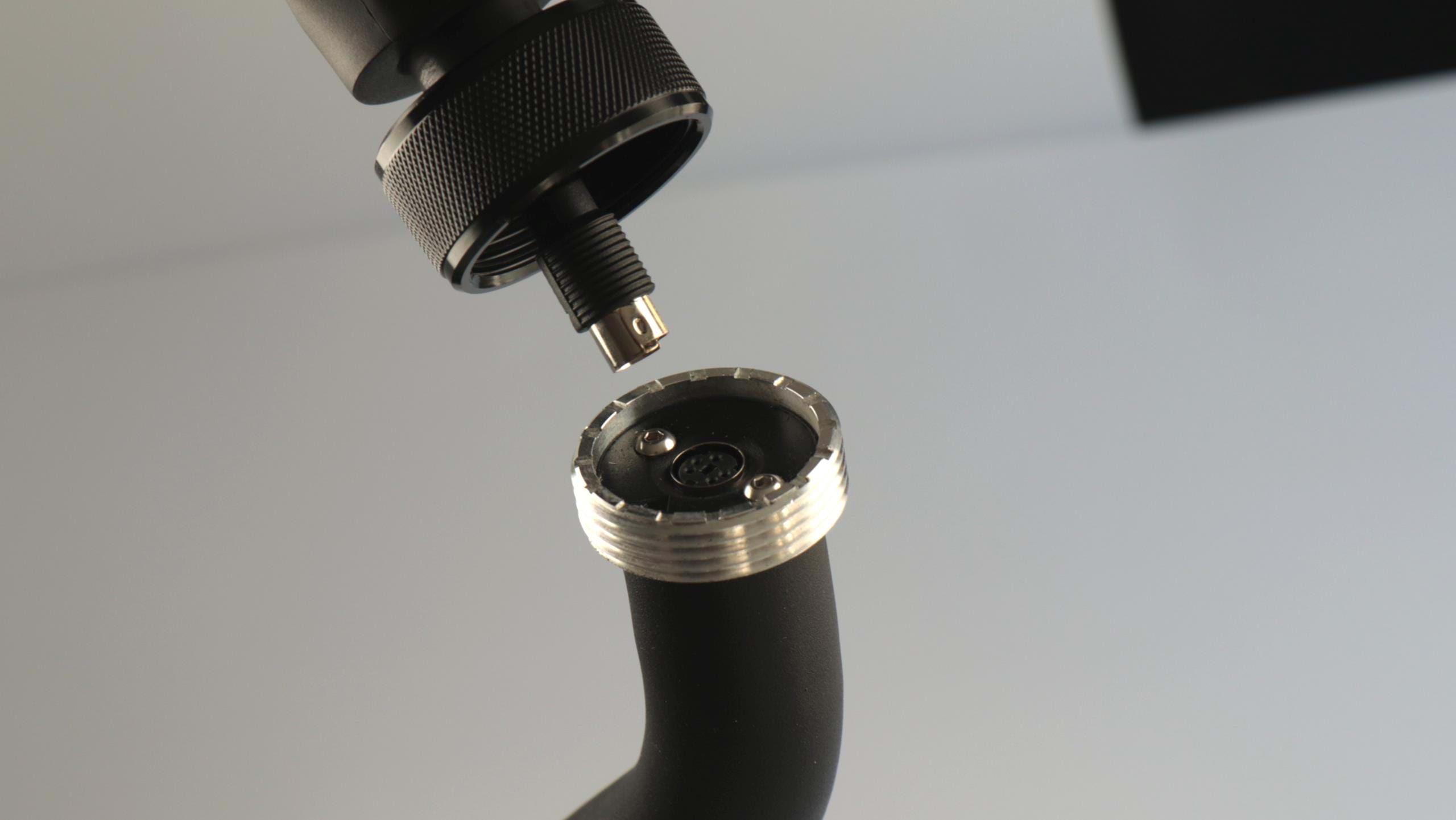 After my first test, I moved the stick lower on the desk mount and attached the 200mm Flightstick Extension.

The extension is a metal tube with a 5-pin mini-DIN (female) plug on the top and another one (male) on the bottom. Installing it is only a matter of attaching the extension to the base and then attach the grip to it. 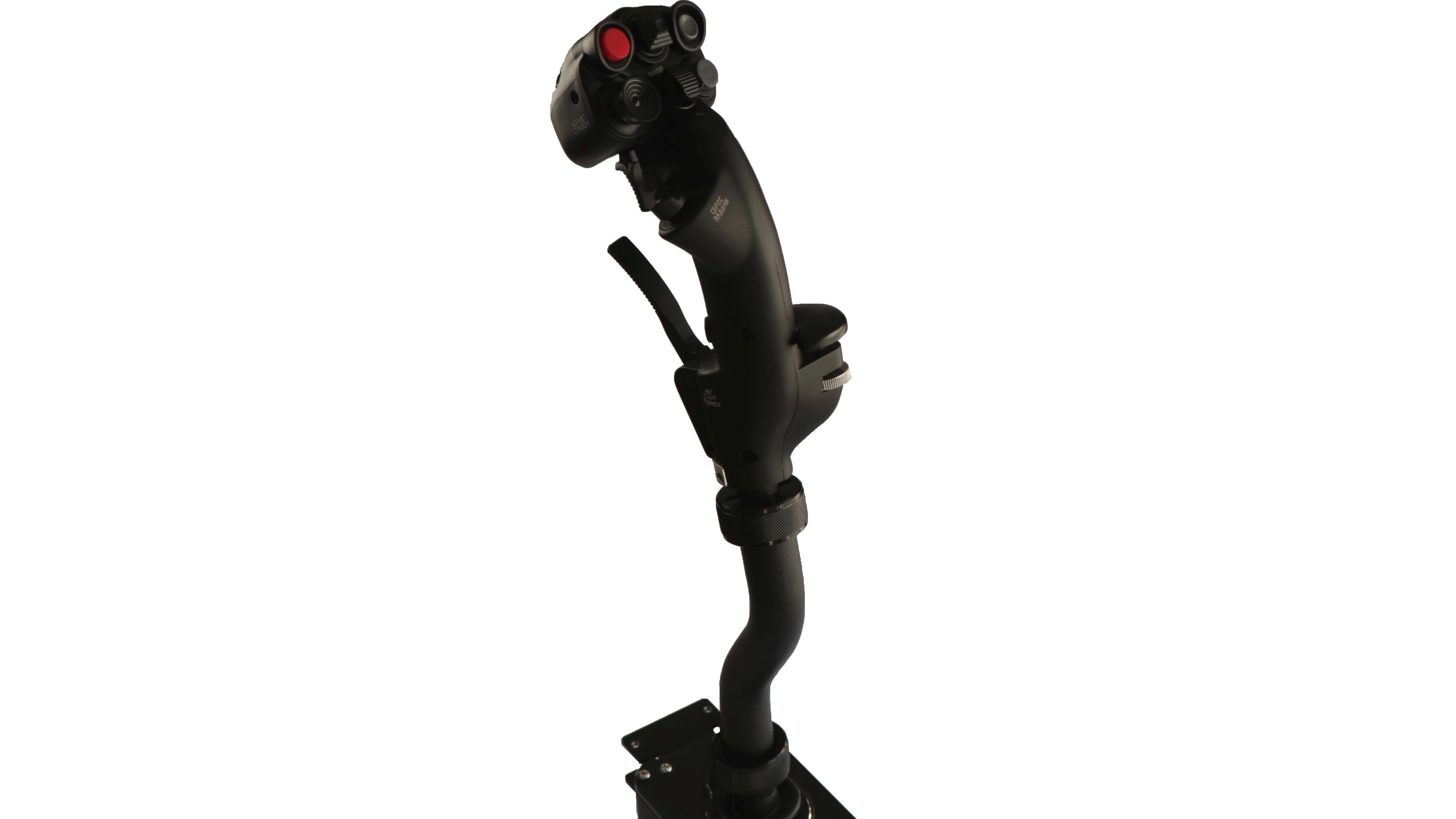 It only takes a couple of minutes or less and you’re all set to use it.

Does it make a difference?

For me, it did. I found that I had a bit more of control over the helicopters. Especially with no spring, it allows us to do produce really smooth movements, which is exactly what we need to keep those whirlybirds under our control.

I think it’s a sound investment, even for non-helicopters, but it’s one I would do if I was considering a VIRPIL joystick for sure.

Continued test and use 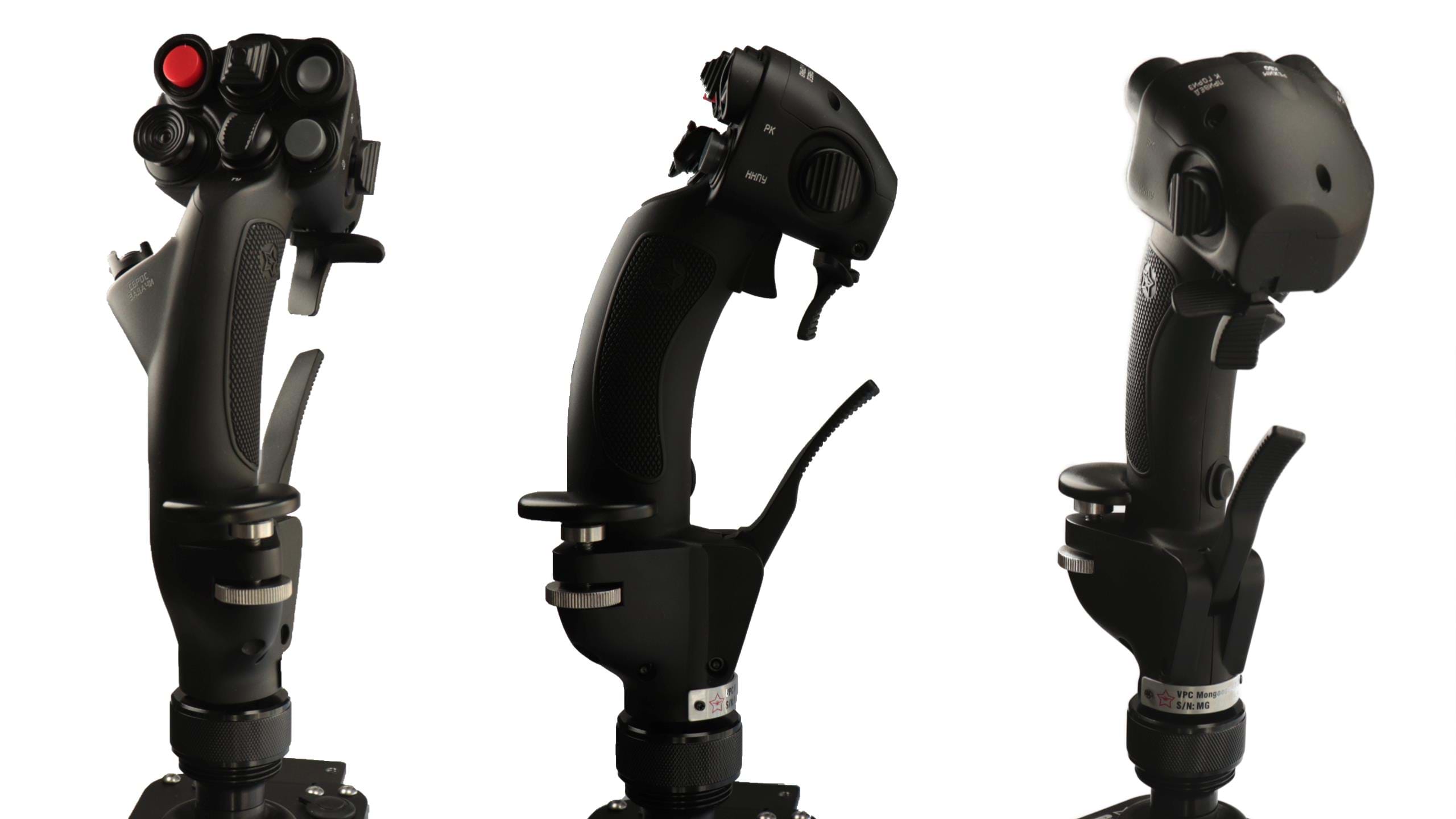 Again, like I mentioned on the review for the base, I tested the grip (well, the whole stick) with several sims and games.

Apart from the fact that the top tier buttons and hat was a bit more out of reach for me (mostly because of the position on the mount, but I couldn’t get the joystick to sit lower), I felt very comfortable with the grip.

Please note that I am not complaining about the position of the buttons and hat and it does not take away from the quality and experience. I am just mentioning it more as a detail/curiosity than anything else. I could use the buttons and the hat, although I had to get used to its position.

There was something that I have to point out, though: the dual-stage trigger.

The first stage is immediately “there” once you add some pressure to it but then you need to do quite a bit of squeezing to get to the second stage. Perhaps it’s me and I am not used to dual-stage triggers (I have never had one before, to be honest) but I was expecting something easier to pull.

Again, not a deal breaker.

Plays well with others

Something very cool about this grip is that it can be used on a couple of bases by Thrustmaster. VIRPIL indicates it can be used on both the TM Warthog Base and the TM Cougar Base, although they do let you know that you may lose some functions.

Afterall, VIRPIL’s software is part of the package deal and, of course, Thrustmaster’s electronics does not support it.

Still, it’s good to know you have the option to use this grip with their bases.

It’s comfortable, precise and you can adapt it to your own hand and wrist position. The axis on the front can add as a toe-brake for those that don’t have toe-brakes, but you can also make it a button press in case you need it.

The 200mm Extension works quite well and adds up to the precision of the base, improving the whole set. You can surely use the stick without it, but I believe you will feel more comfortable and be more in control if you use it, simply because you can be much more precise in your movements.

The base allows you to have that precision as well, not just the extension, of course, so, like I said, the whole set works perfectly together.

My opinion? If you are in the market for a good stick, I recommend this grip as much as I recommended the base.

I haven’t tried the other grips, but from the 5 that VIRPIL has on their catalog right now, this seems to be one of the most complete.

Installation 10
Ease of use 9
Performance 10
Build quality 10
Design 9
Total score
9.6
* The above final rating is calculated from a weighted average and not the direct arithmetic average. This means that some elements of the review will have a higher influence in the final score than others.
Click here to purchase/download or more information