Thrustmaster released one of the coolest-looking headsets aimed at the flight simulation community. But do they look, feel and sound as good as the photos? 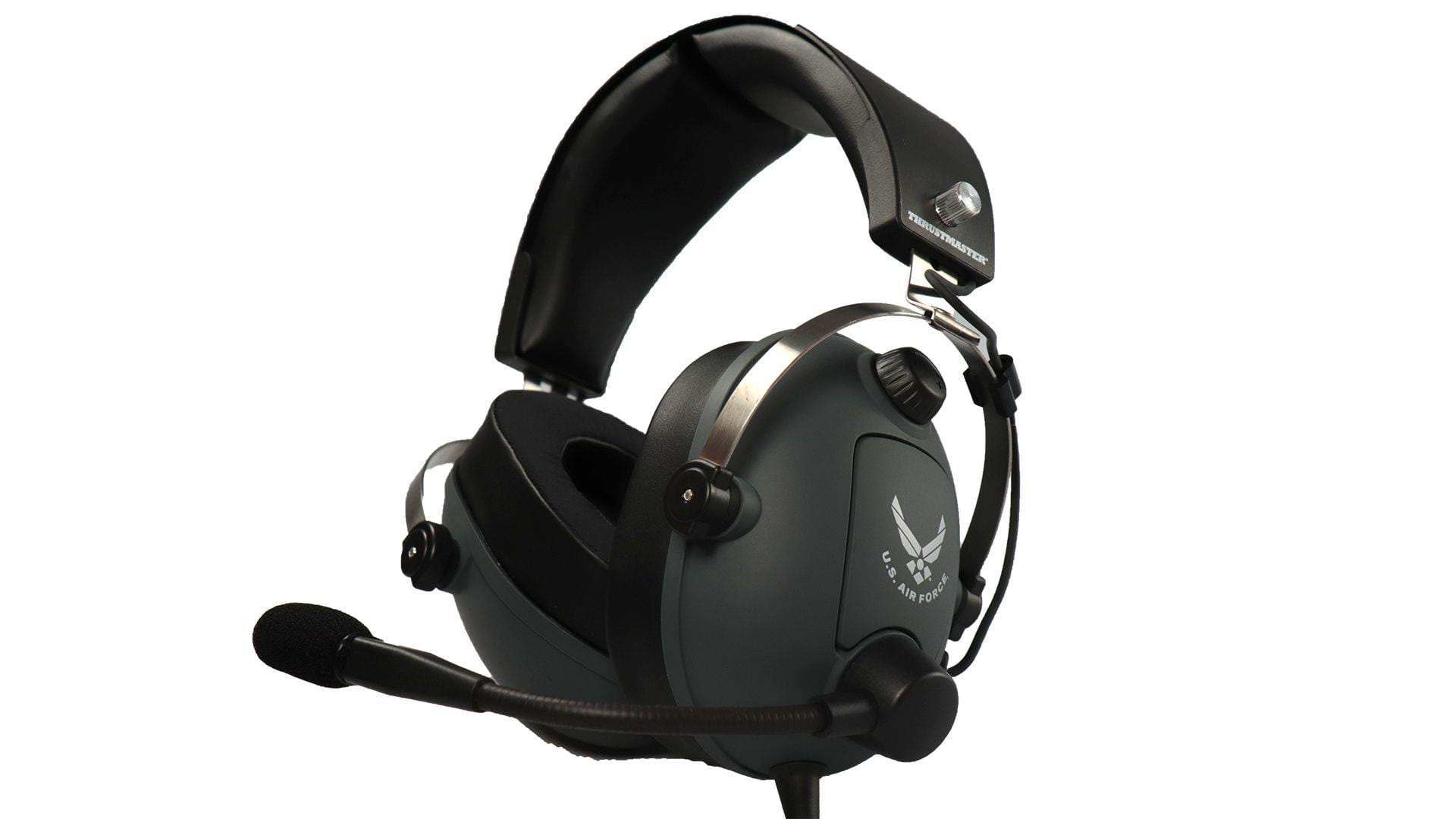 Headsets are a huge thing in our hobby. Almost as much as a monitor or a joystick – especially when you need it for voice communication. There’s a huge offer out there but they are all generic gaming headsets.

Thrustmaster decided to cover our hobby and release a unit especially aimed at us. The Thrustmaster T.Flight U.S. Air Force Edition headset replicates the look and feel of an aviation headset, with a few twists. 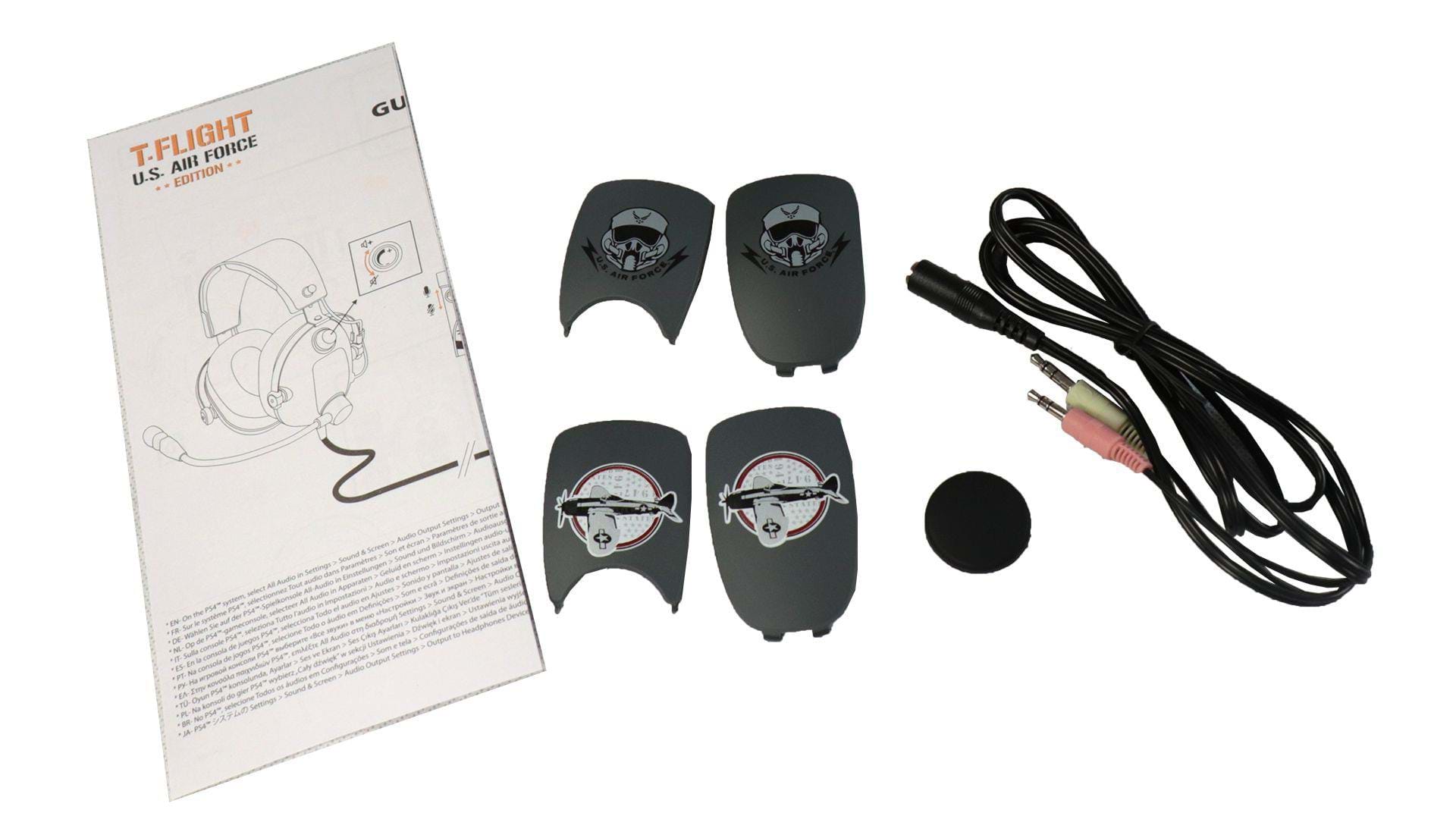 The Thrustmaster T.Flight U.S. Air Force Edition headset comes with quite some interesting features. I’ve had a few headsets with great quality – of different levels of prices – but none was so packed with features as this one.

Inside the box you will find the manual, a split cable (it splits the single cable from the headset into a mic and headset cables), the microphone and 2 extra side plates, as well as a small cap (to replace the mic if you don’t want to use it) and the headset itself.

Yes, the mic comes detached from the headset. You see, you can attach and detach the microphone at will and replace it with the beforementioned cap.

The microphone can be placed on the left ear cup and, on the top of the same case you’ll find a knob to control the audio volume.

Both ear cups feature a small plate that can be exchanged by a couple more. The one that comes in the headset features the U.S. Air Force logo, but you can switch it with a P-47 one as well as one that looks like a helicopter pilot’s helmet. 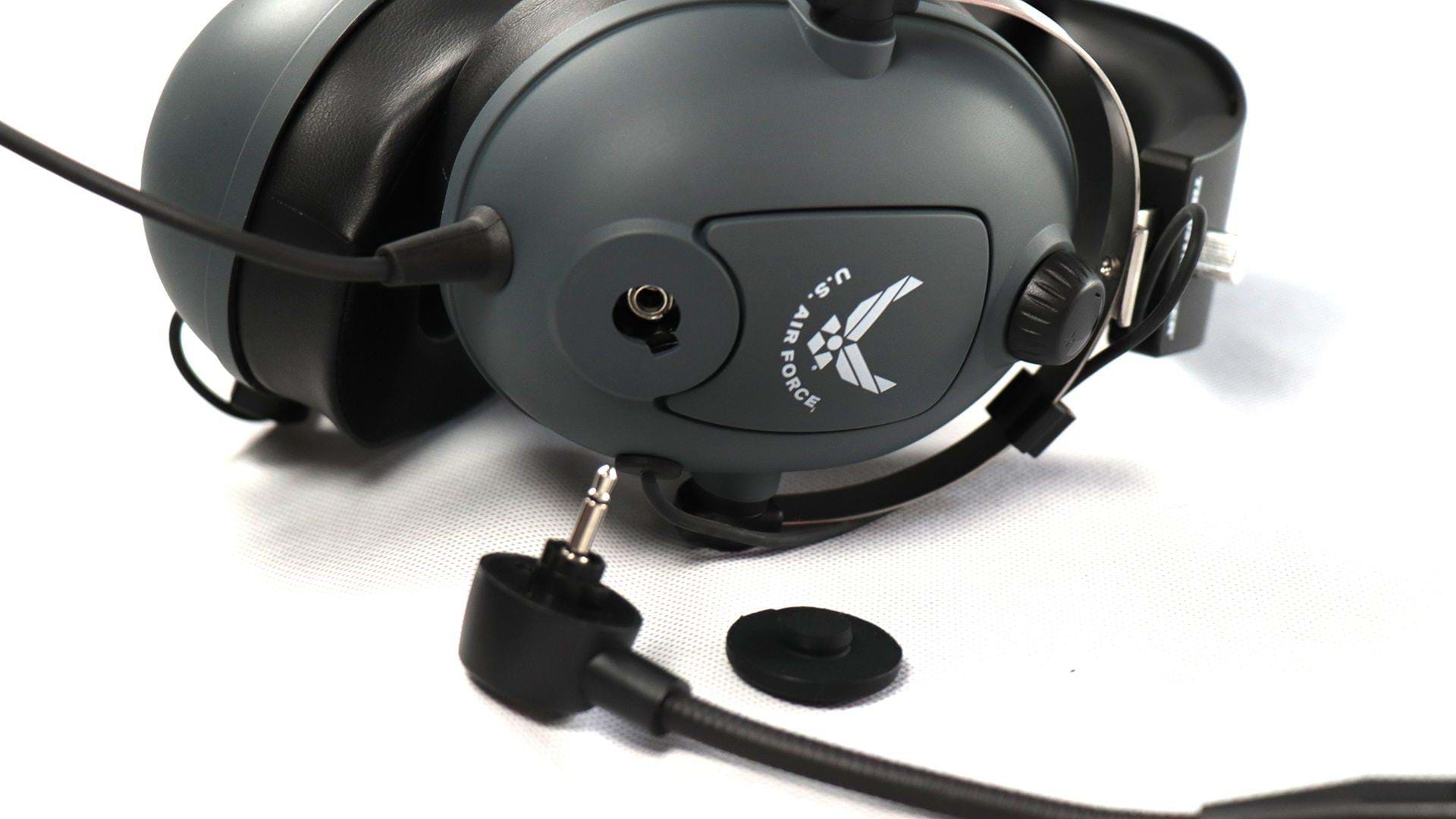 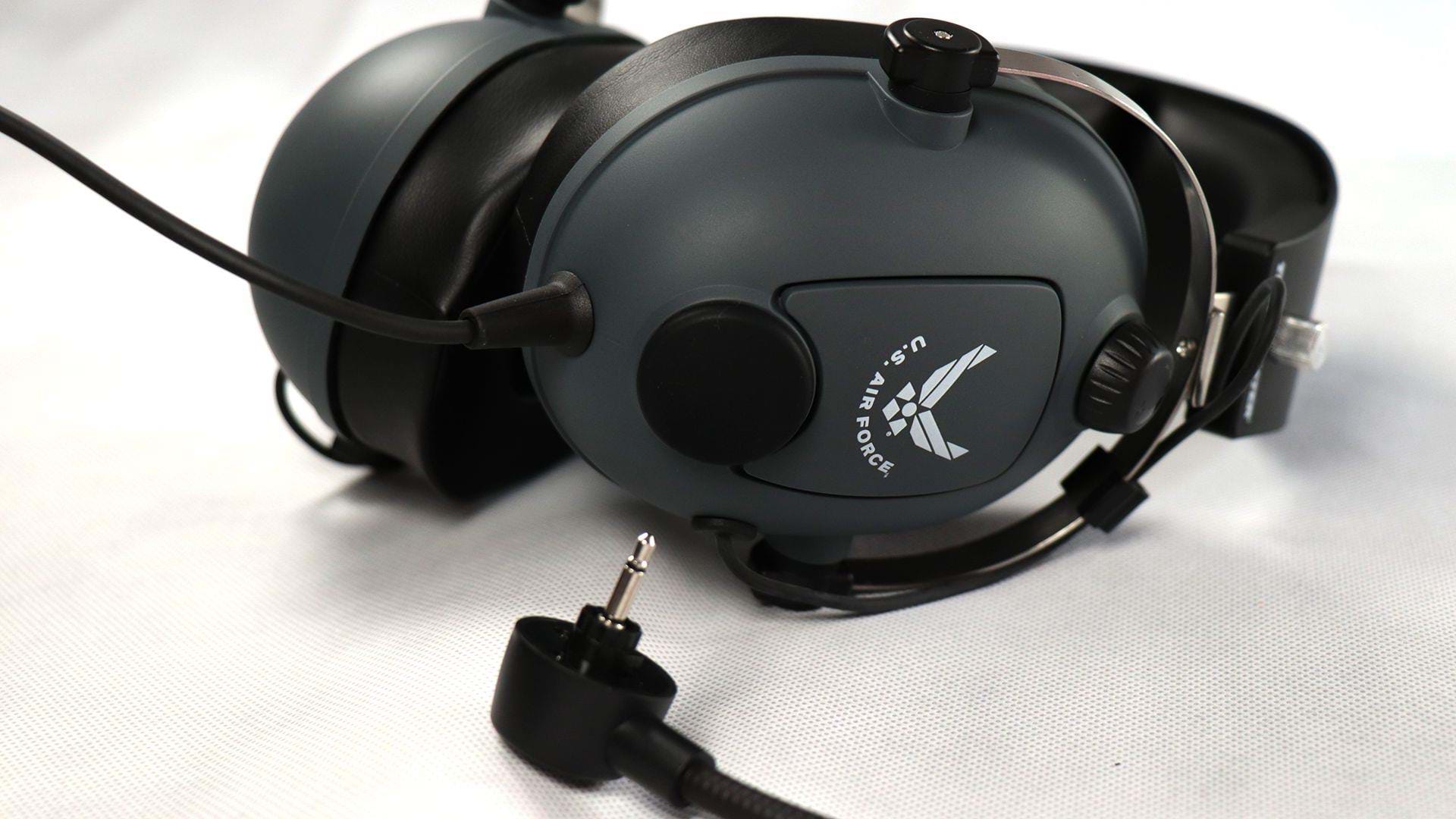 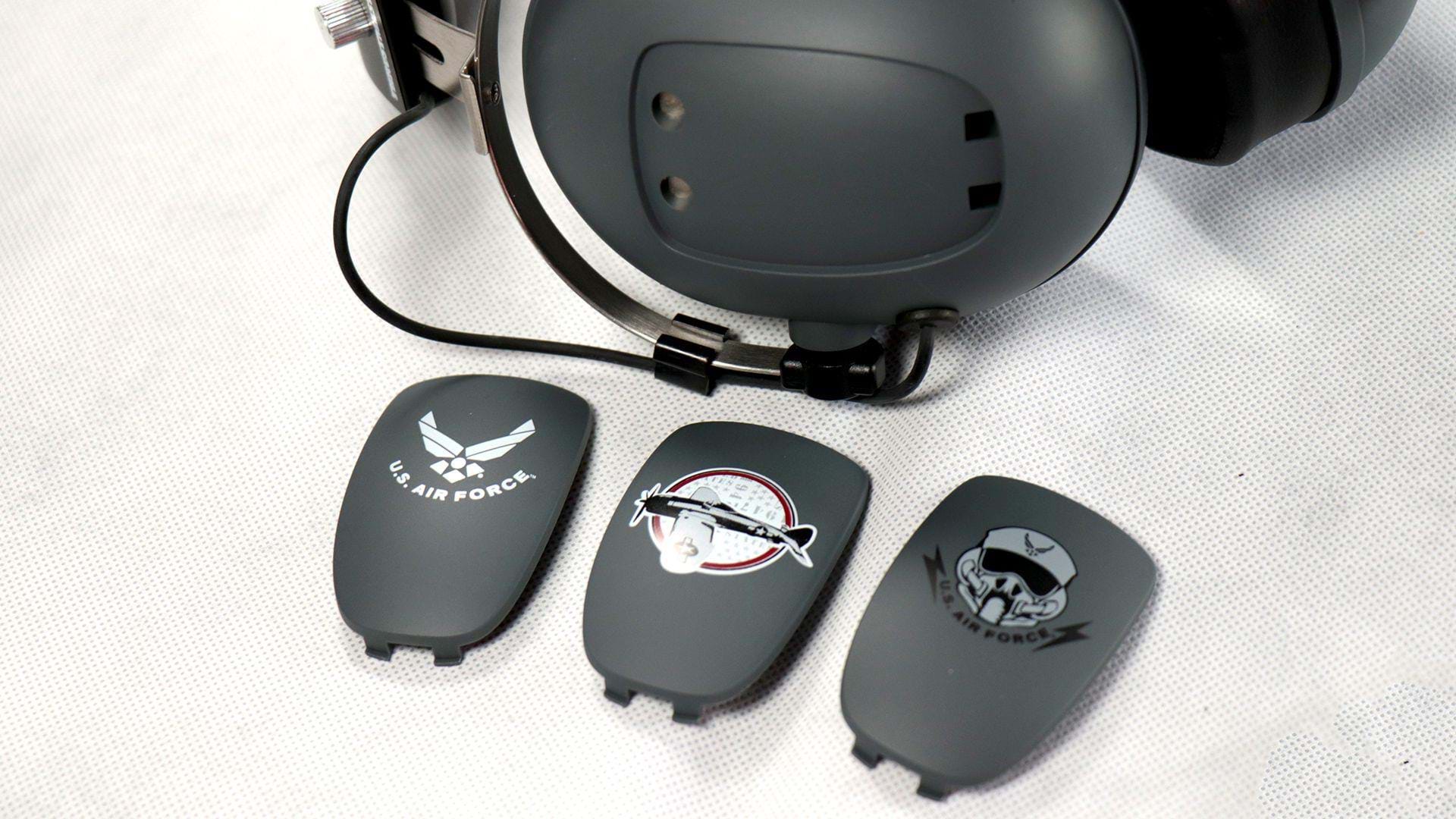 This is a cool customization idea, but I wish Thrustmaster had gone a bit further and added a clean plate (without any drawings or logos) so that we could place our own sticker and really customize it.

On the cable, we can find a small control box that allows us to mute the microphone and control its volume. This is the first headset I own that allows for both audio and mic volumes and I found it cool, although I keep the mic volume all the way up. 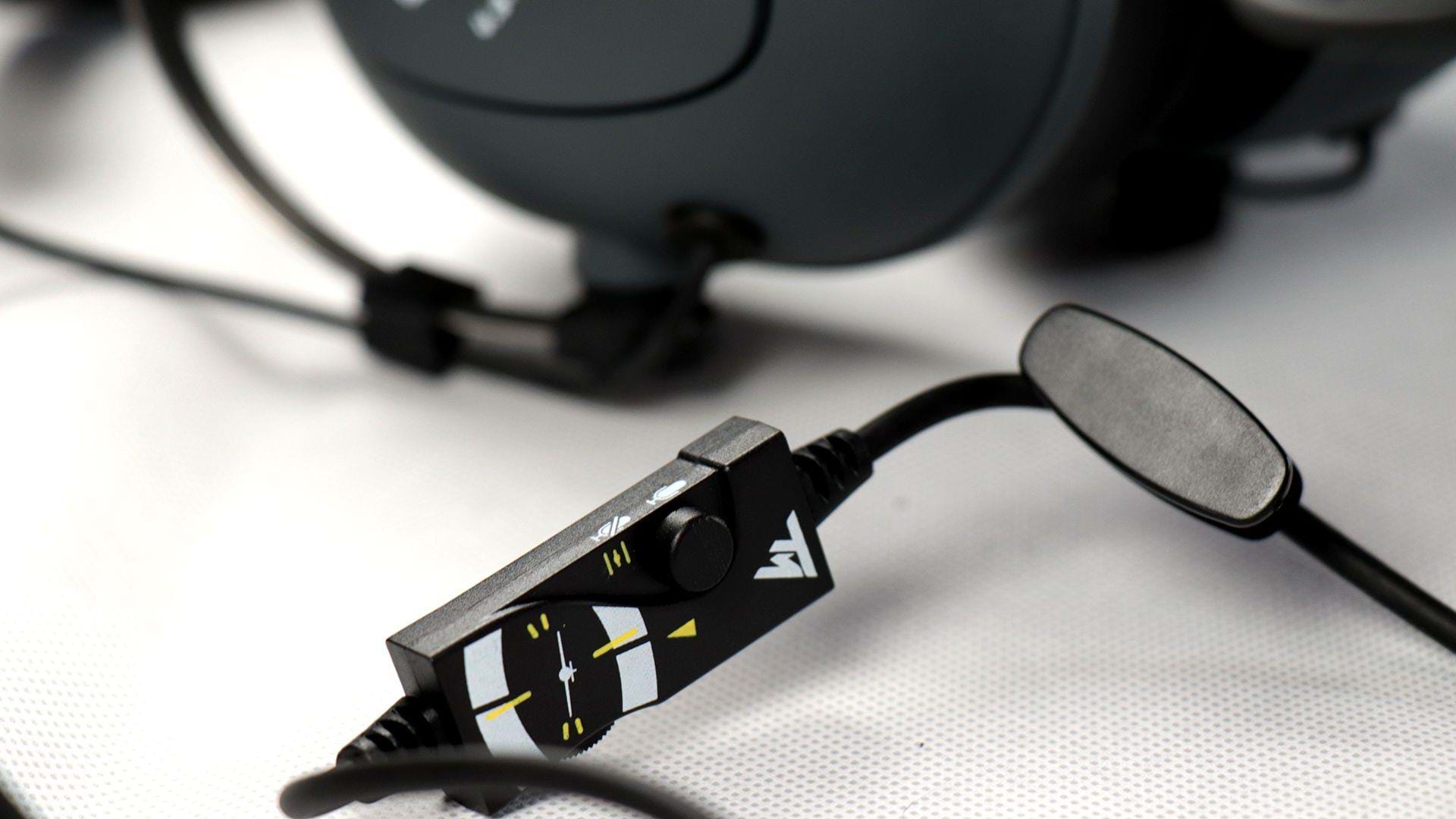 On the head band you’ll find a couple of knobs that allows you to keep the ear cups in place as you adjust the set to your head. Handy! 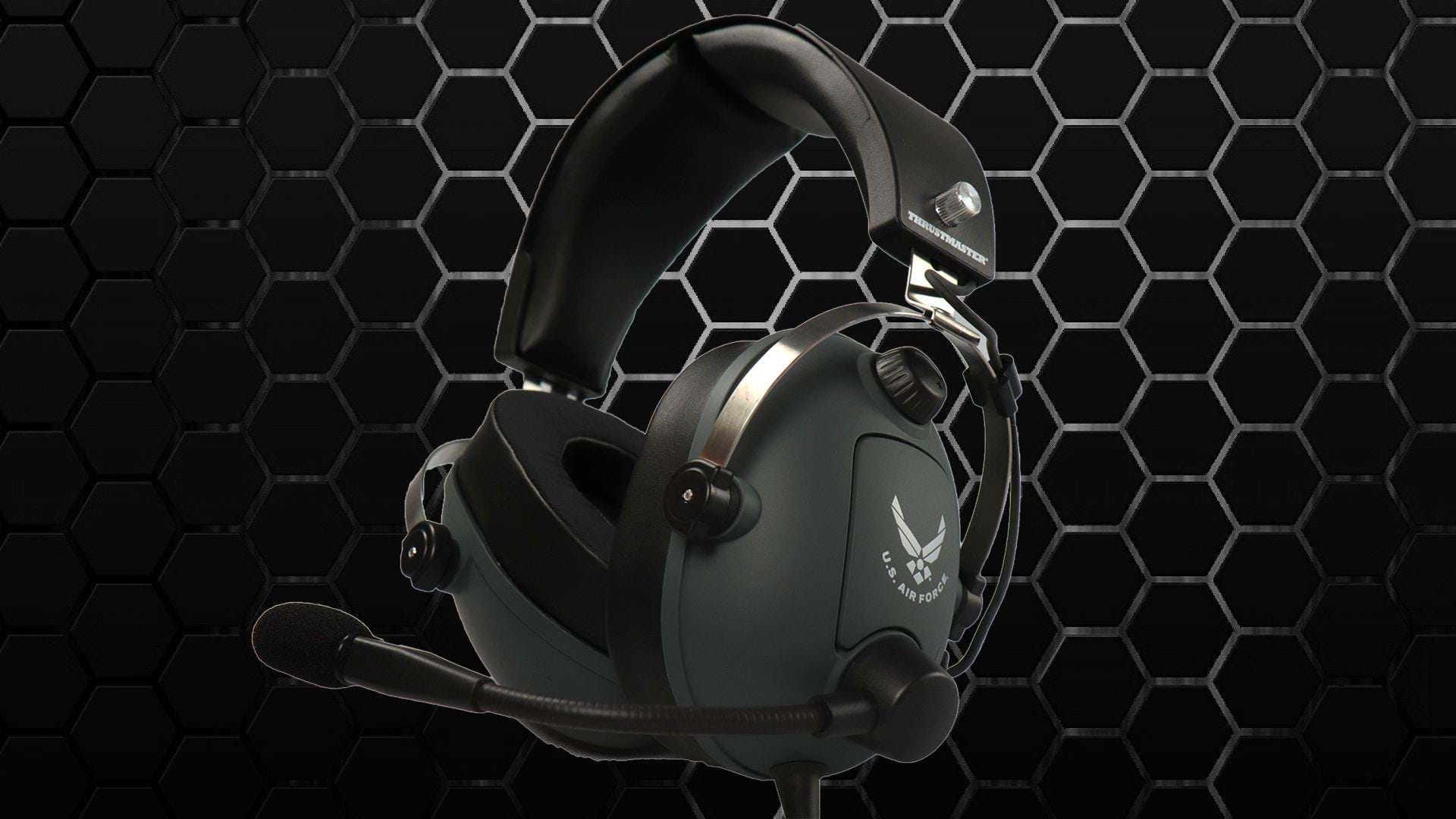 I have to say I fell in love with this model as soon as Thrustmaster released the first photos.

I found it absolutely amazing on the pics but seeing it live… Man… What an amazing design. The materials used don’t only give it a sturdy feeling, but they look great. The metal parts give it a great touch.

The color on the ear cups is a stunning dull grey and the headband’s plastic has a very cool texture and the Thrustmaster logo on top. 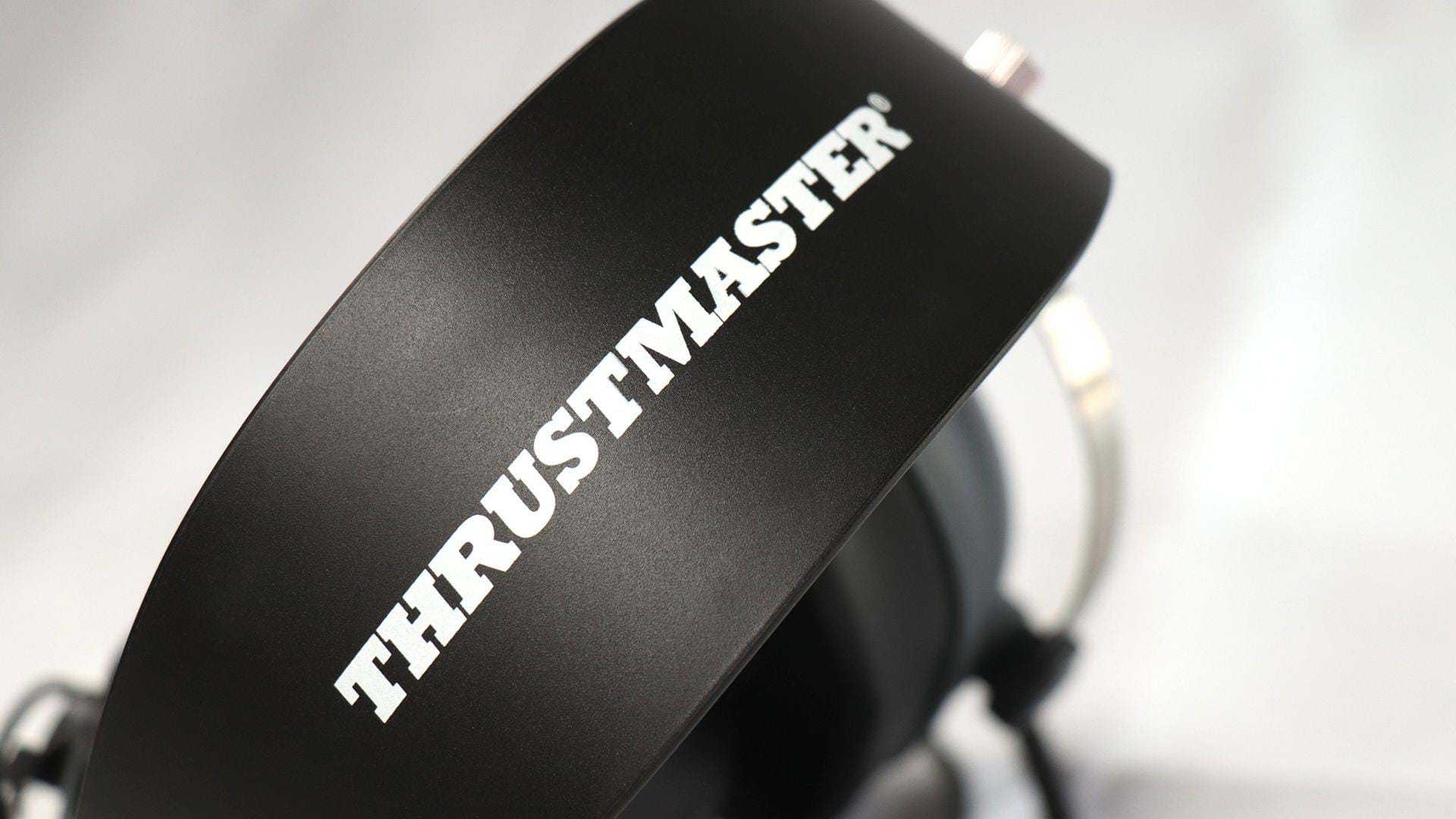 I’ve had some cool looking sets such as the Razer Kraken  but for a flightsim aficionado such as myself, the Thrustmaster T.Flight U.S. Air Force Edition headset has the kind of looks that really speaks to me.

Yes, design is a matter of taste so what I find cool, can be hideous for some folks. But this headset will sure turn some heads in our community. 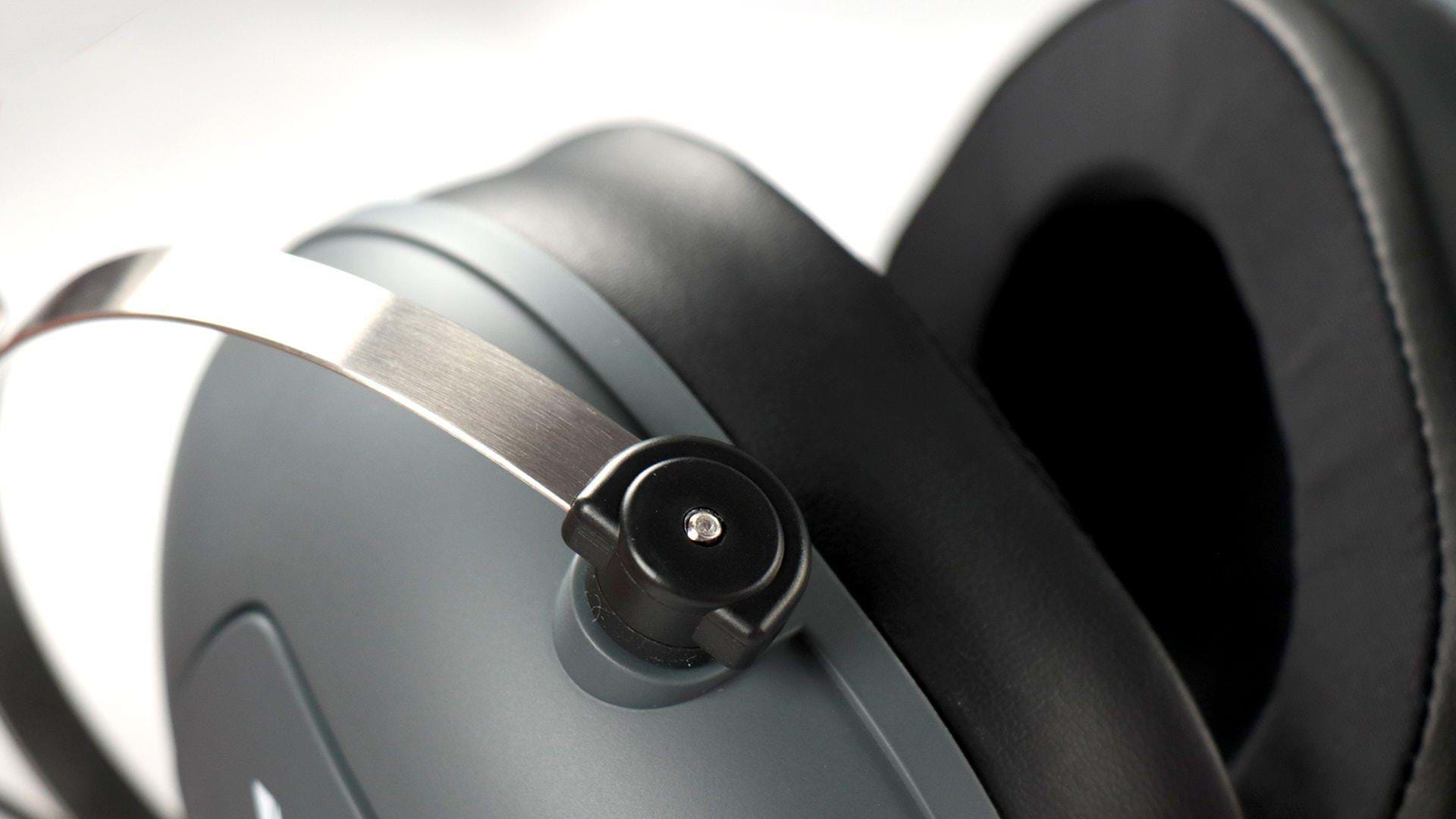 The cushion on the ear cups and the head band is of great quality. These are some of the most comfortable sets I’ve ever used. I think the only time I felt better wearing a headset was a few years ago when I tried a Bose.

Now, don’t get me wrong: I’m not saying this is the most comfortable set in the world. I’m sure there are a lot of sets out there that as or even more comfortable than this one. I, obviously, haven’t tried them all. I have tried my share of headsets, though (perhaps some 8 different brands in the last 25+ years) and these adapt very well to my head and around my hears.

Not only that, but they also isolate the outside sounds a bit better. Not completely (not even by a long shot), but enough for me to notice the difference between it and the Razer I mentioned before, which is, well… was, my main headset.

Sound quality is great and the T.Flight does its job flawlessly. It sounds as well as it looks: absolutely great.

All the dynamics are there, and the sound is crisp and with great bass, mid and treble frequencies. Not a lot more to say here. I couldn’t find any issues so all I can say is: good job, Thrustmaster. 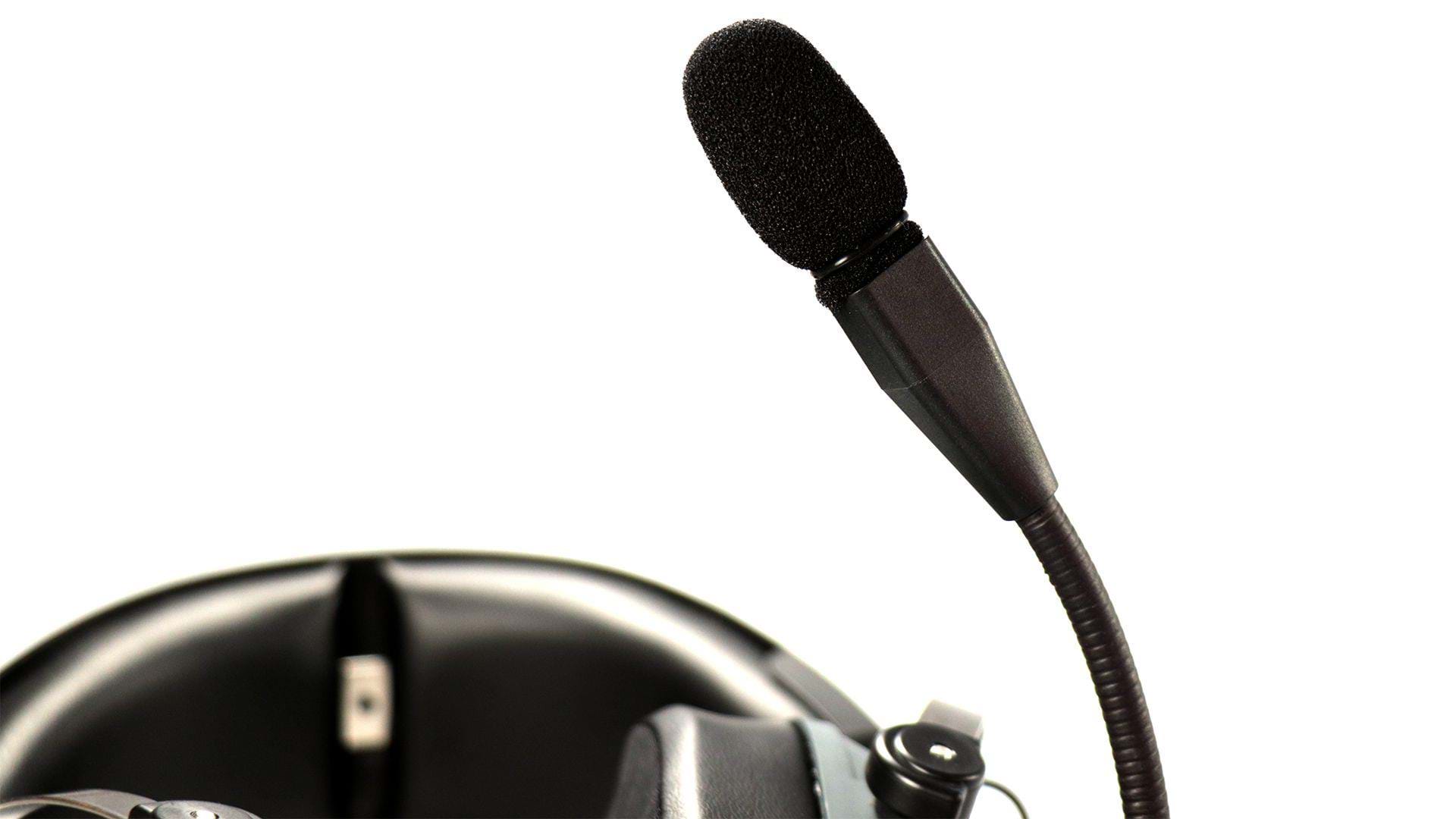 What I mean with this is that, in these units, the microphone is usually not the star and this is also true on the Thrustmaster T.Flight U.S. Air Force Edition.

Like I said, one of the cool features of the set is the fact that we can remove the microphone. This leaves a 3.5mm audio connection available for you to connect any other microphone.

I tried a higher-quality mic (Sony condenser microphone) and the sound quality difference is noticeable.

Now bear in mind that while the T.Flight microphone is not of the greatest quality, it’s still pretty good so this is not exactly a criticism. It does what it’s supposed to do but I felt the mic quality is not the same as the audio quality in the headset.

It’s still, of course, good enough for online communication which is the main use this set was developed for. And it does what it supposes to do, honorably. 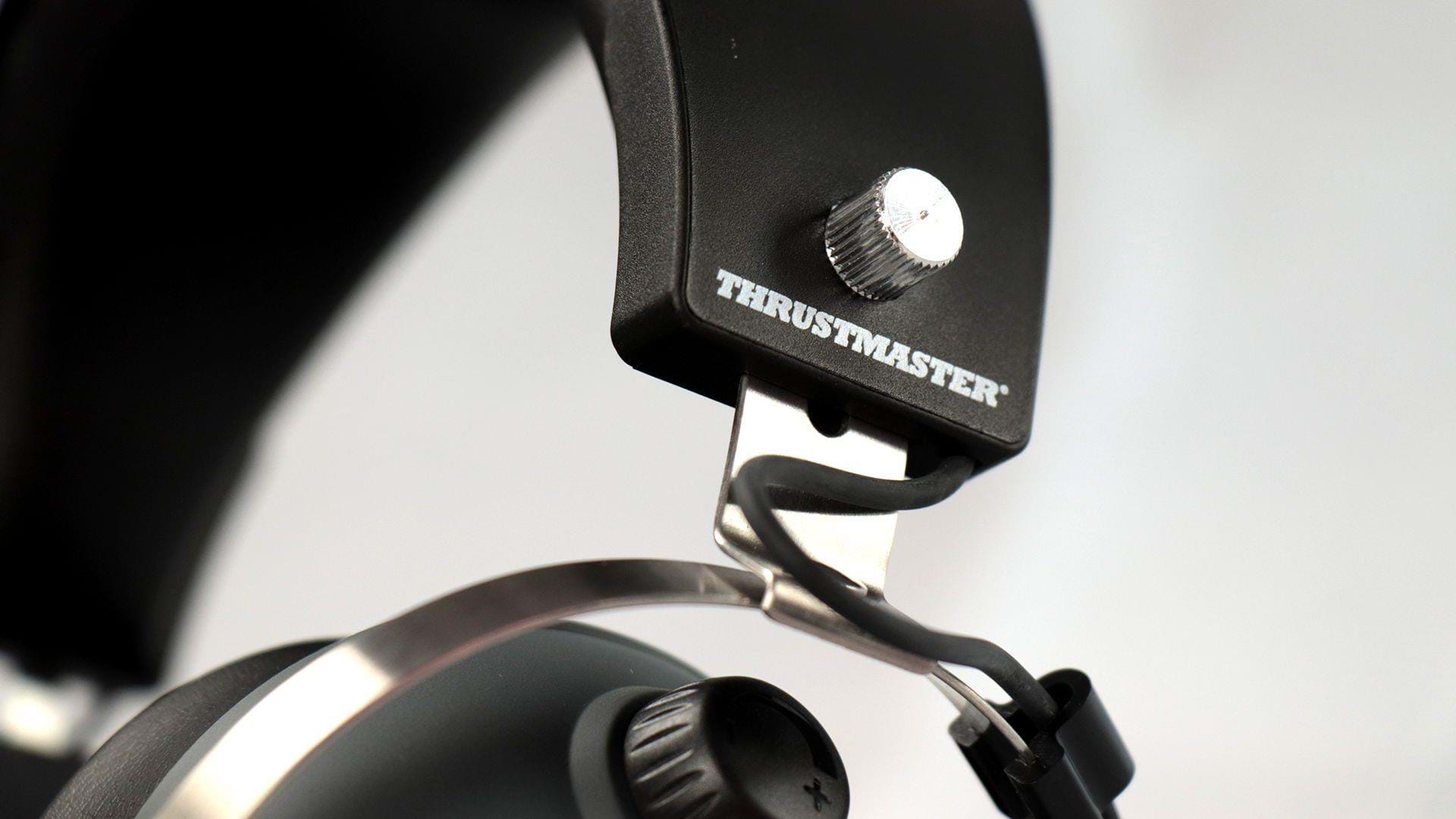 Over the years, Thrustmaster has been releasing some amazingly designed pieces of hardware for flight simulation. I’ve had the pleasure of reviewing some lower and higher gear (such as the TPR pedals ) and Thrustmaster always delivers.

This headset is not only an amazing piece of design (seriously, I can’t get tired of looking at them – I think I may have a problem) but it sounds pretty well. Honestly, it sounds much better than I thought it would.

The Thrustmaster T.Flight U.S. Air Force Edition won my heart. And my ears.

Build quality 10
Sound quality 8
Microphone Quality 7
Design 10
Total score
9
* The above final rating is calculated from a weighted average and not the direct arithmetic average. This means that some elements of the review will have a higher influence in the final score than others.
Click here to purchase/download or more information