There are a few images of Australia that are internationally recognized: The Sydney Opera House, the Harbour Bridge, and the sandstone monolith that is Ayer’s Rock or Uluru.

A place that is magical, mystical and a draw for those following ancient beliefs as well as those seeking new experiences from around the world, Uluru is a truly iconic destination; and the gateway to that destination is Connellan Airport.

Before we start on the review let’s reflect on what the developers tell us about the product:

Meticulously handcrafted by RIM&Company, Ayers Rock for X-Plane aims to provide an as-real-as-it-gets replica of Ayers Rock Connellan Airport (YAYE) and its picturesque surroundings in the Australian Outback.

For many hundreds of years, the Ayers Rock has been a holy site to local tribes of Aborigines. Discovered as a touristic destination in the 20th century, the impressive sandstone formation and the surrounding “Olgas” Stone massive are perceived as emblem of Australia. Opened up by the Australian flight pioneer Edward Connellan in the 1950s, Ayers Rock Connellan Airport has become an important Australian airport handling many daily flights from all over Australia and serving the state of Western Australia.

At its tremendous 25000 km2 coverage, it invites you to compelling VFR-flights through the famous “Outback” of Australia, scheduled airline services and many other adventurous operations.

So, pack your suitcase, and off we go to embrace the unique opportunity of visiting Australia´s most picturesque place!

So, with quite the build-up, let us see what lays in store for us.

We are going to get this review off to a… funky start. The installation is nothing short of a nightmare for beginners to X-Plane, and a hassle for experienced users.

The initial download is fairly innocuous, a mere 650mb zip file. Once extracted and dropped into your Custom Scenery folder, things start to get a little more complex. Reading the manual, we are given a brief history of the airport as well as updated nav charts for the region and approach plates. We also have a first inkling (well if you know your Australian geography you’ve already spotted an issue above) that this addon might not be everything one hopes for. Uluru and the airport and terrain depicted in this scenery is in the Northern Territory, not Western Australia as mentioned in the developer’s introduction. I know it may seem like a small thing, but it sets a tone for what is to come.

After consulting the manual, you discover that in order to complete the scenery you have purchased you need to download other files. The first one is the content from OpenSceneryX, this content is needed to bring the airport to life (something we will cover off in more detail later on) and complete elements of the scenery.

This content is free but must be downloaded and installed separately. I have an issue with this as to me an integral part of the installation is just not there. I get that it’s probably a licencing thing, however from an end user perspective this is cumbersome at best, and thoroughly frustrating at worst.

The next content you learn you need to acquire separately is the photoreal. Mentioned in the description we were privy to earlier, this addon covers a very large area. (Can you feel the but coming) However this photoreal must be accessed from what appears to be one of the developers Google Drives.

Again, I have to assume it is to do with some sort of licencing issues; however, trying to download 23GB of photoreal from Google Drive (yes, I was using a download manager) is painful. I feel that a dedicated part of the developer’s website should be set up to host these files, or at the very least package them differently to improve this aspect.

Once you do manage to finally download these files uncorrupted, the manual advises to just drop these folders into your Custom Scenery folder to enjoy the experience. Alas this is not the case.

The downloads are nested inside their zip files such that if you follow the manual you will never see the photo real you have spent such an arduous amount of time and effort acquiring. Again, whilst this is something easily resolved for experienced X-Plane users, for those new to the platform (such as myself) it is exceedingly frustrating and excruciatingly painful. 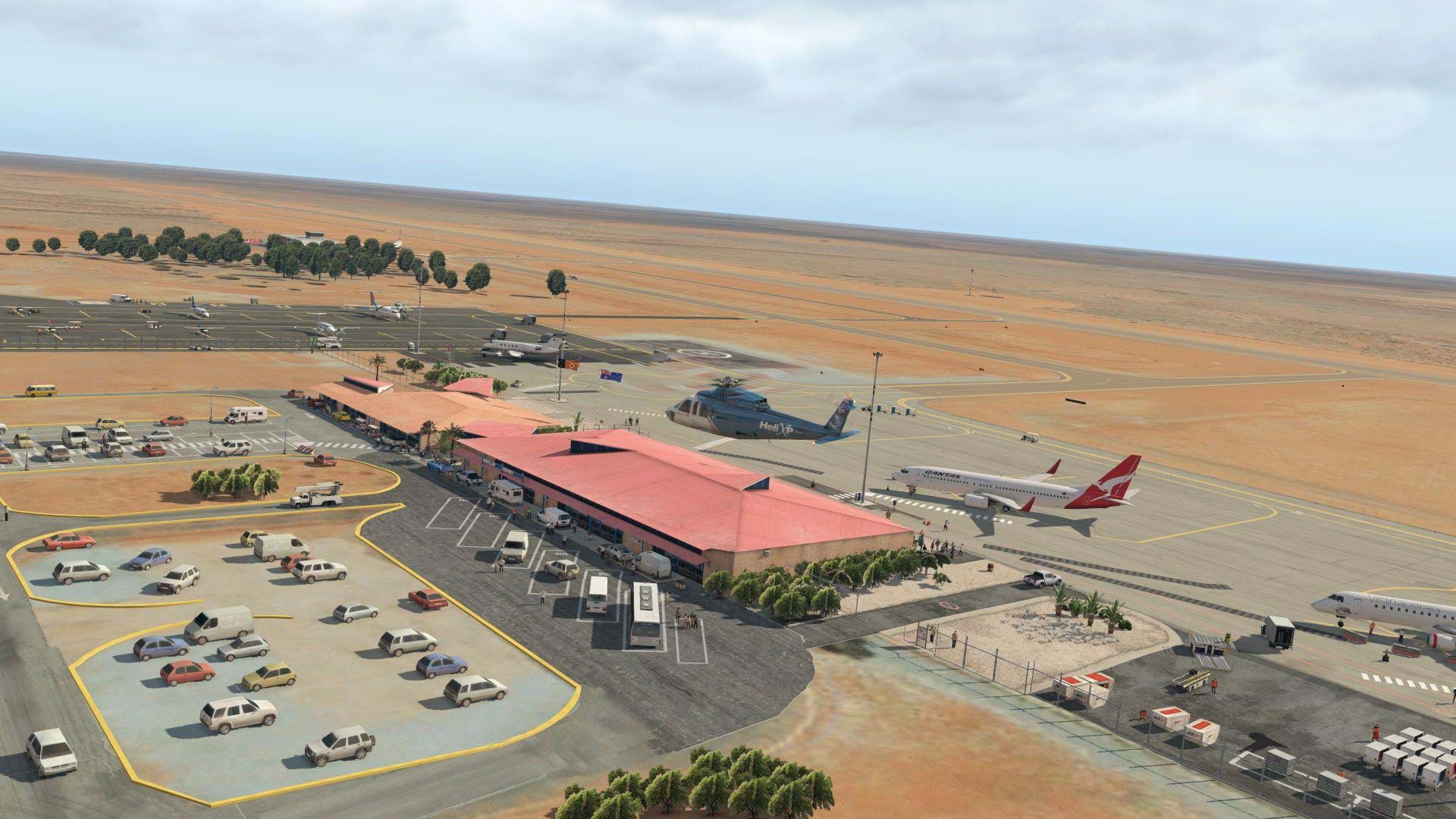 Finally, we have everything in place for the scenery and we are able to enjoy the majestic beauty of the Australian Outback. The recreation of Connellan is overall very well done. It is updated to how the airport appears at the beginning of 2017 including updated taxiways and apron spots. The textures for the taxiways and runways are of an excellent quality. 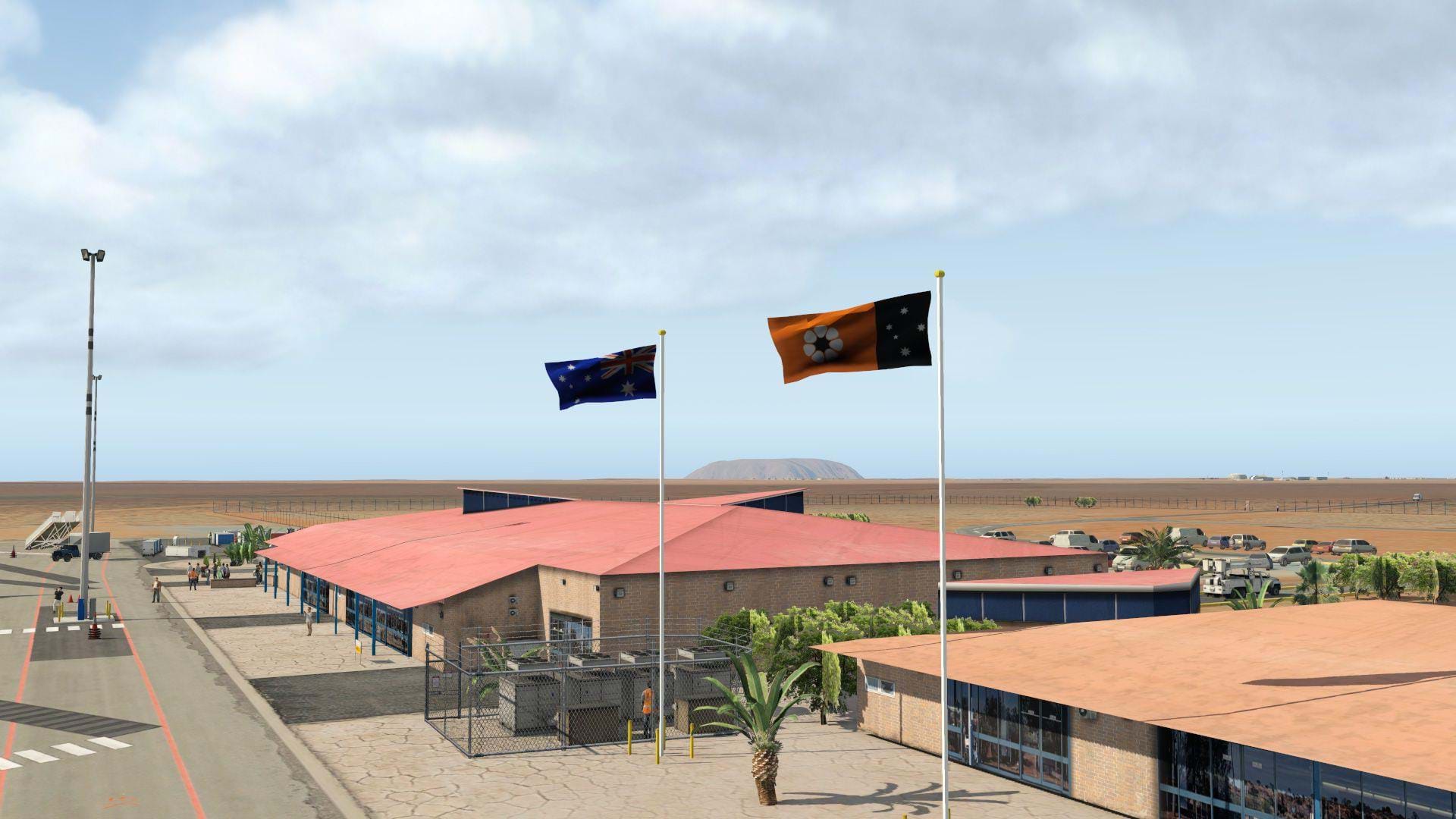 Terminal and ancillary buildings are also modelled in correct positions and for the most part excellent detail – though a little artistic licence has been used for some of the terminal building textures airside. Accurate signage has also been implemented along with a scattering of correct flora to further enhance the experience. 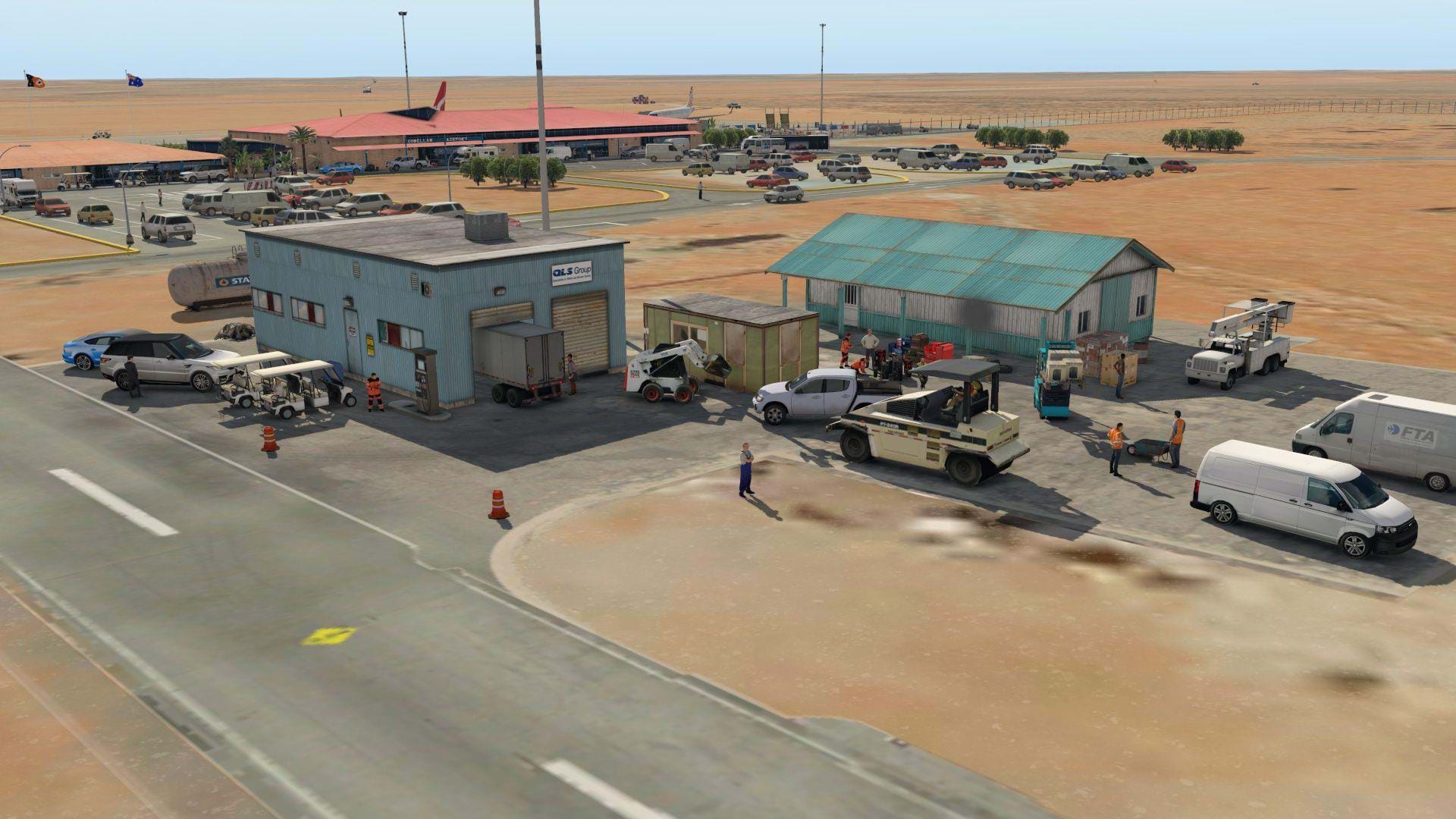 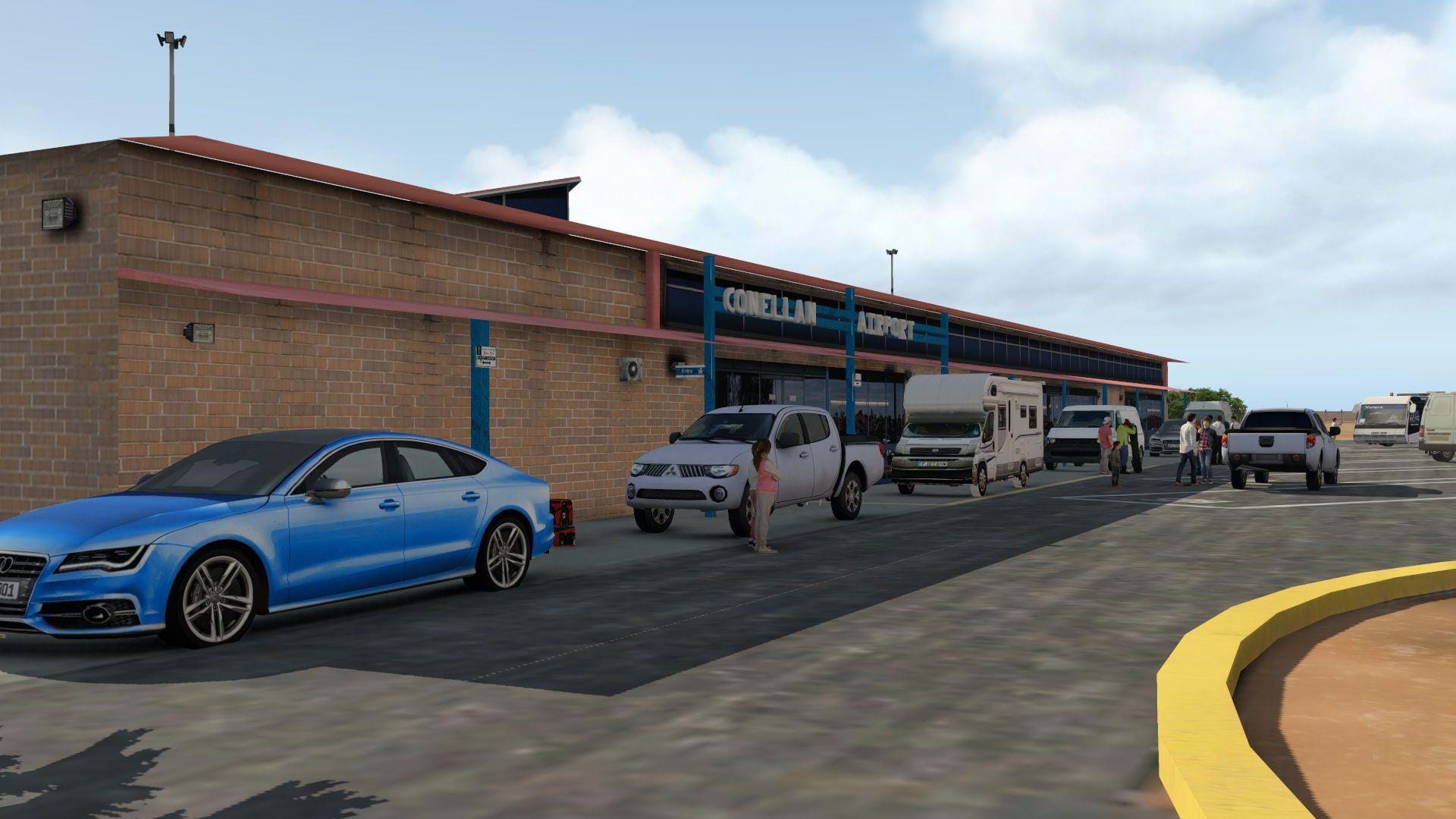 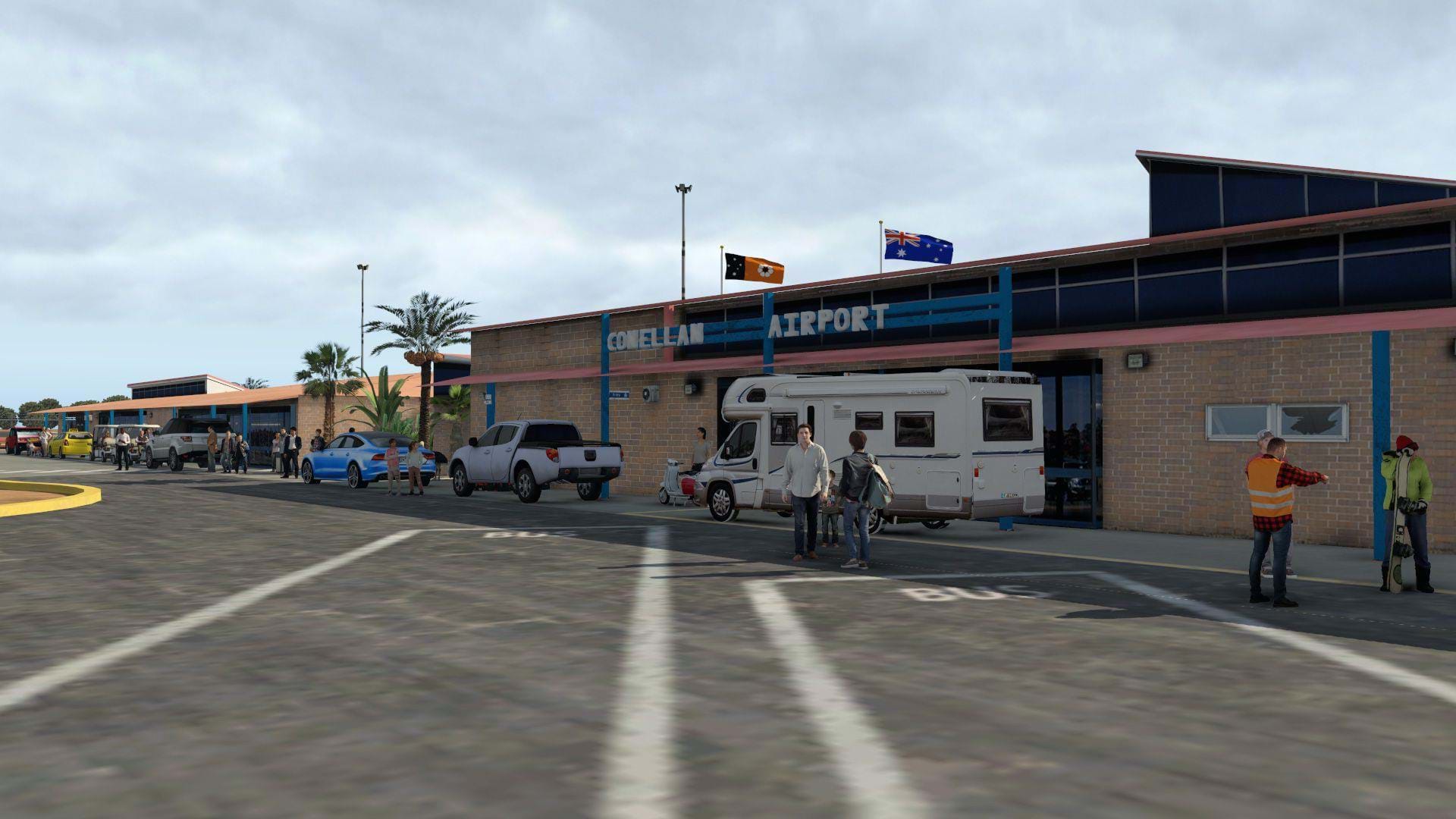 For me, one of the key elements of the success of this add on is the fact that unlike some other scenery this airport feels alive. It includes the various detritus expected around an active airport as well as including a series of “scenes” that playout at the airport in conjunction with static elements.

These include a taxiing business jet, a helicopter heading out and returning on a sightseeing trip, fire fighters debriefing from an exercise and many more scattered throughout the airport and surrounds.

Much of this of course comes from the OpenSceneryX plugin you installed earlier, and hence why I postulate that this should have been licenced and included in the installation and not have to be acquired separately. 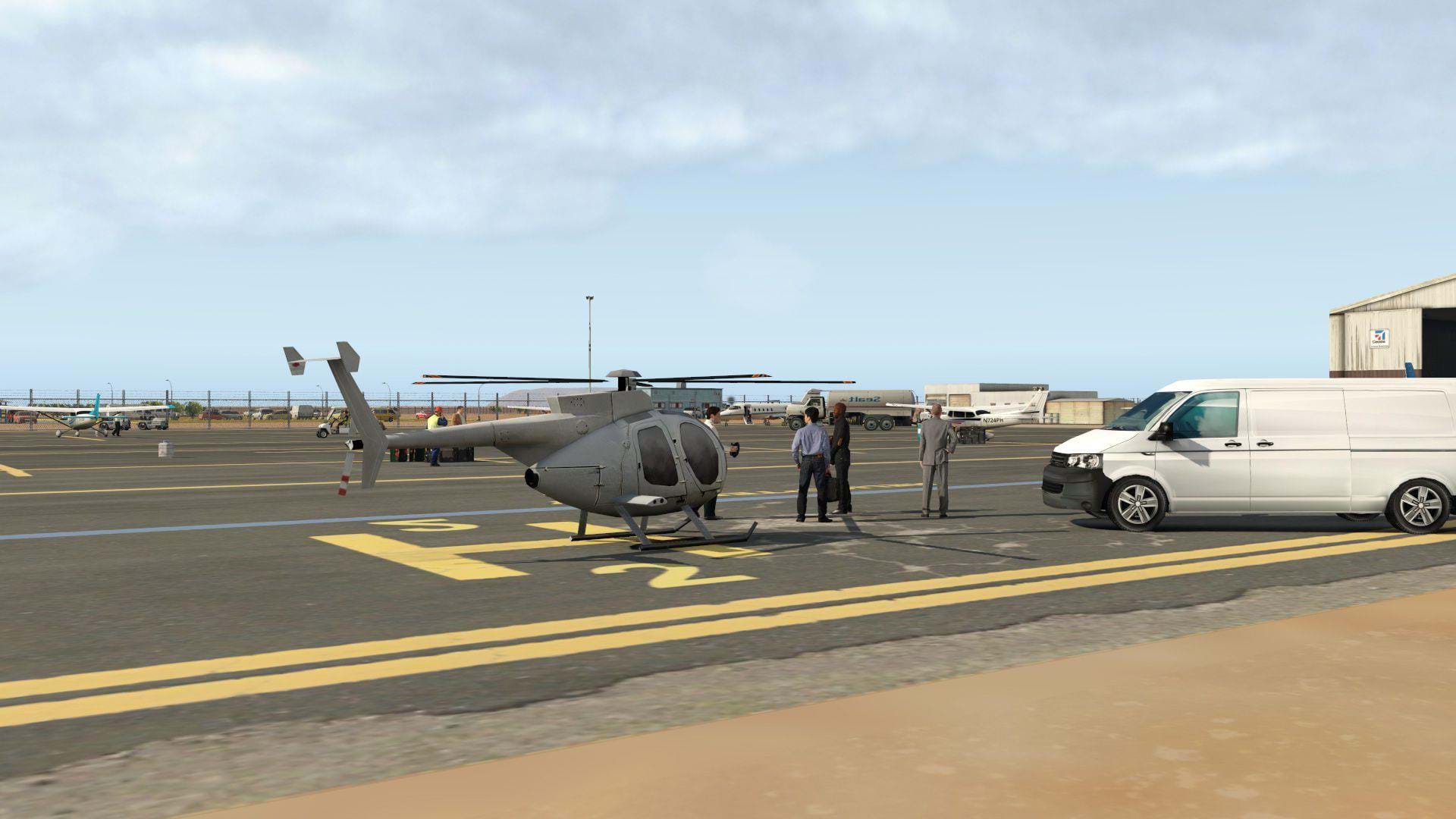 However, it is also this attention to detail that is this scenery’s undoing. There are several graphical glitches which appear to somehow have missed QA testing which really spoil the feel that the rest of the scenery works so hard to create. Simple inversions of textures is not something you expect form a payware product.

Another peculiarity of this rendition of Connellan is that despite the fact that the ample GA and helicopter parking that has been modelled in the scenery, none of it is implemented as start positions in the simulator. There are no Helipad starts (despite 6 being modelled and available) and only one GA start which, instead of being placed in a GA parking spot, is put in the middle of a taxiway. 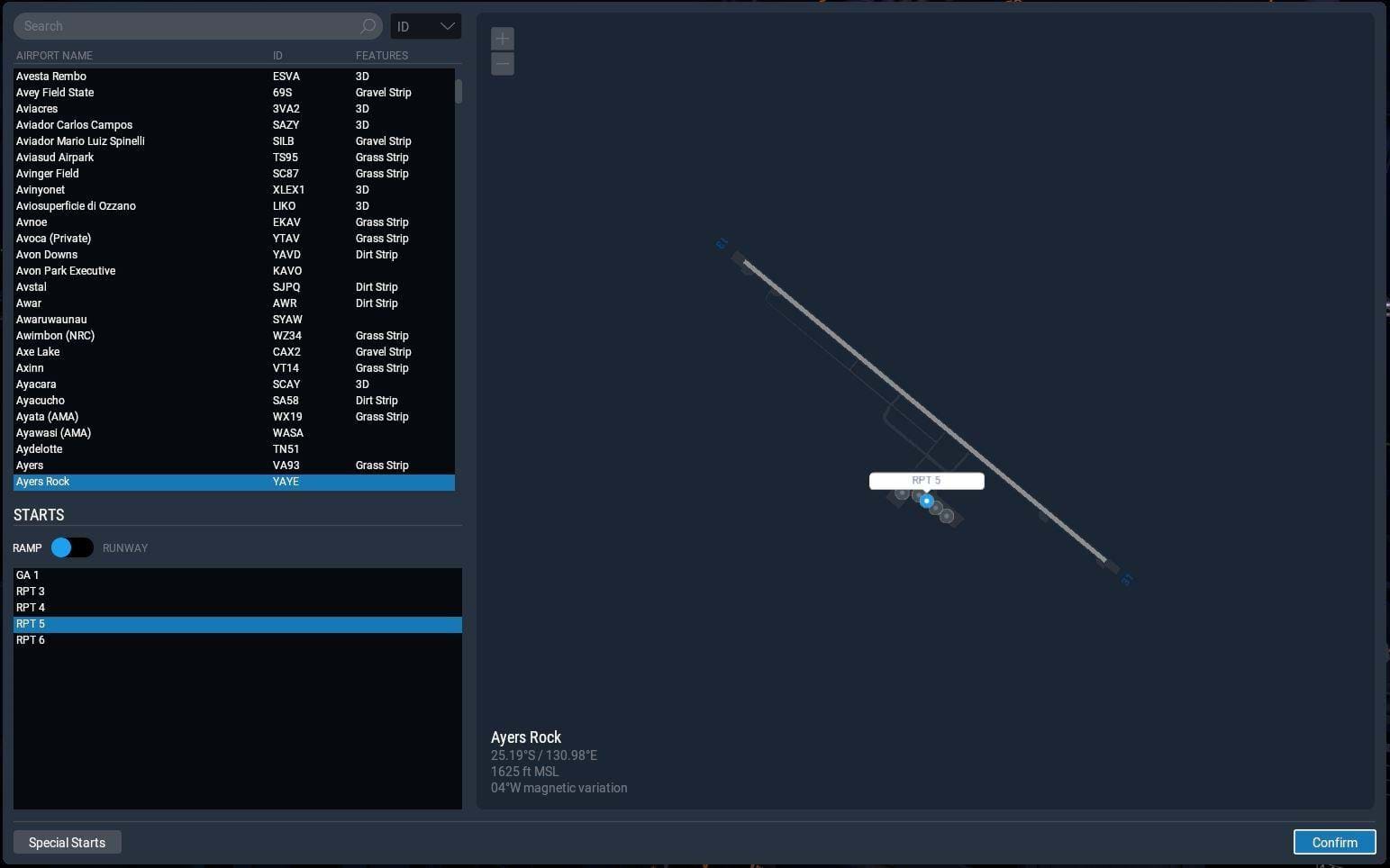 As night fell, the scenery again displayed a positive by showing that the developers had taken full advantage of the lighting abilities of X-Plane 11 and produced a well illuminated airport. 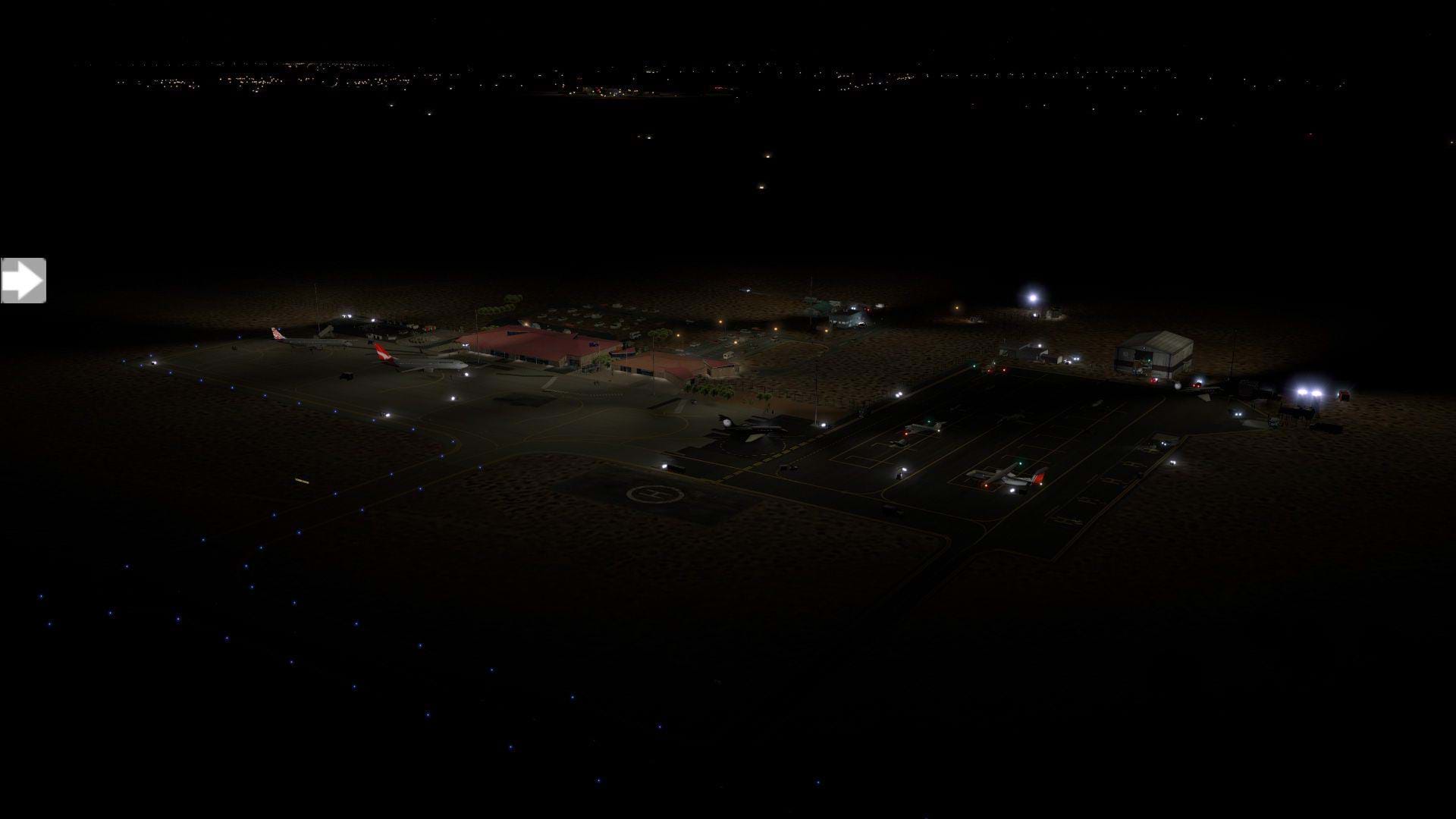 The photoreal included with the package is not just for the airport but for the surrounding area and the quality does not disappoint. There are additional buildings modelled for the nearby township, but not sadly for the resort near the base of Uluru. The representation of the Olgas and Uluru is far superior from that of default and does make flying in this area a lot more fun and interesting, but again the lack of adding the resort buildings feels like a missed opportunity for the scenery. 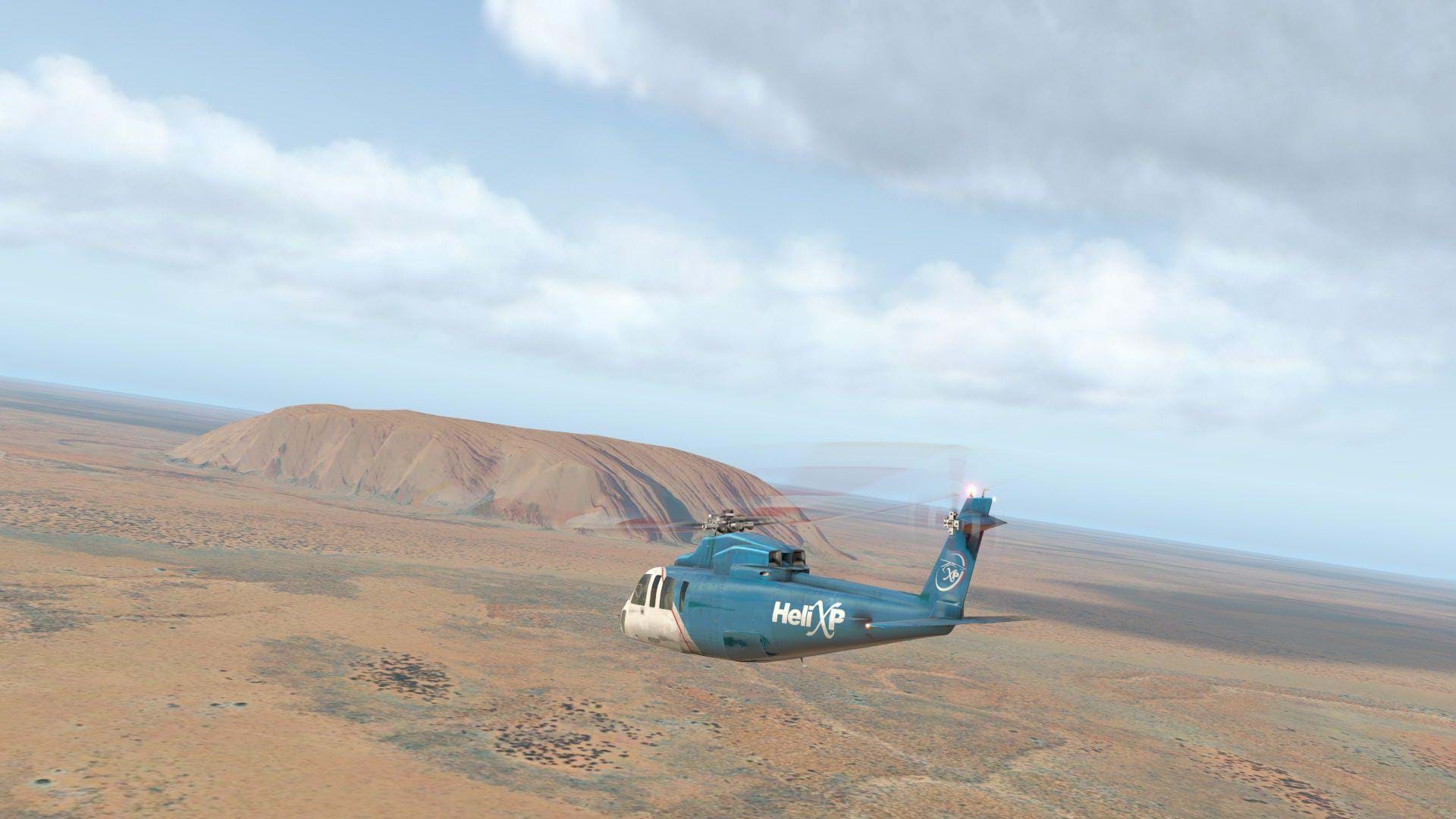 This scenery is a bit of a mixed bag in terms of performance. There is a lot going on in this airport with the animated stories brought to life by OpenSceneryX; however, those do not hit the frame rates too hard. The photoreal on the other hand will hit your system hard as it loads for the first time, but once loaded the experience smooths out. Overall not a huge hit long term, but elements will clog your system briefly as they load. 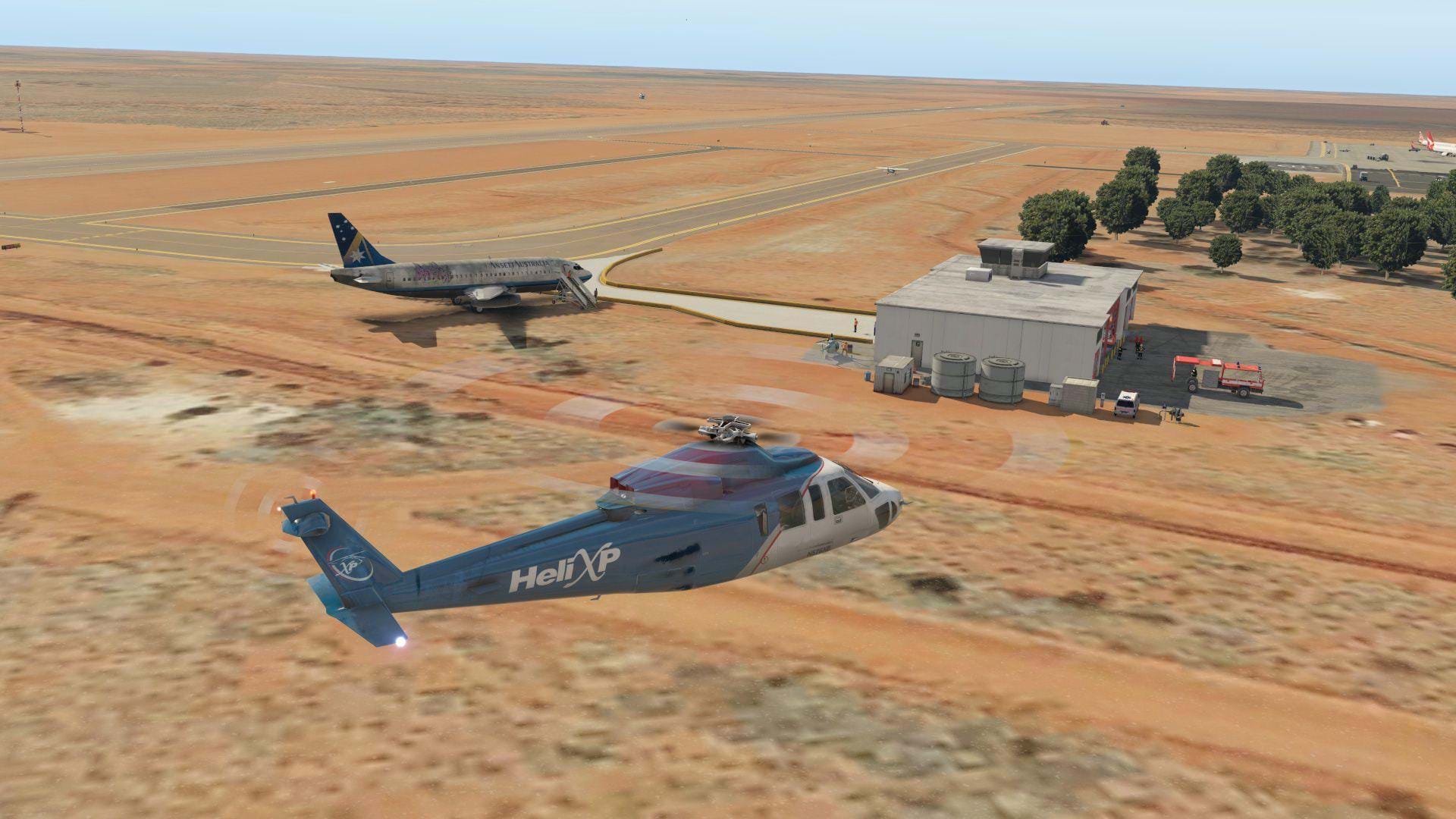 Overall this is definitely a vast improvement on the default version of this airport. It is a solid and mostly accurate depiction of the airport and provides a great experience for pilots looking for a different destination to fly to, whether it be for a long-haul flight into the majestic beauty of Australia’s heart or a low and slow exploration of the same.

It has its fair share of idiosyncrasies; ones that, overall, I believe can be fixed by the developer in patches or looking into licencing agreements. Yet none of these issues are deal breakers. This airport feels alive like a quality add on airport should and so despite its issues, I would still recommend it. 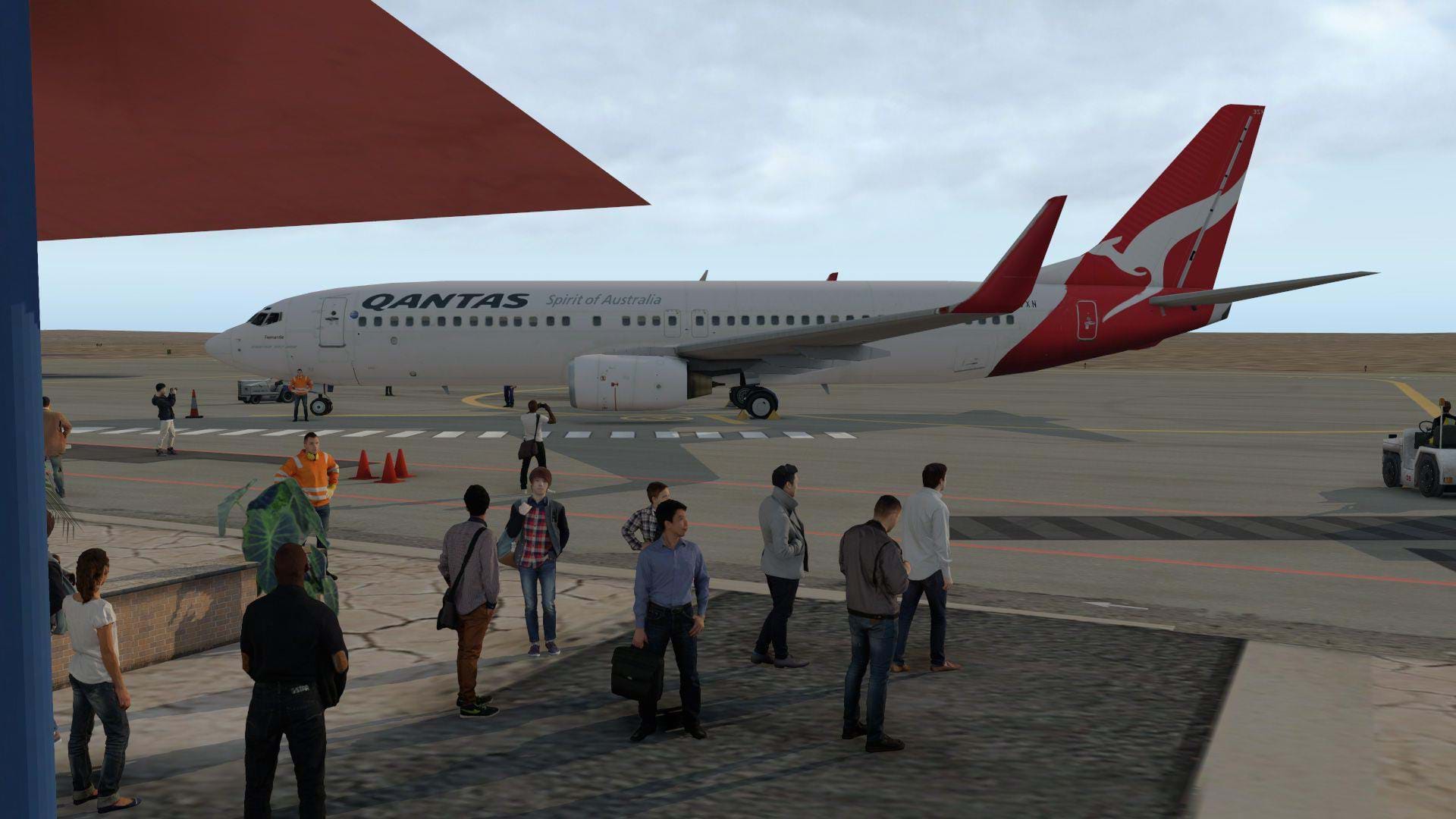 Installation 5
Model 9
Mesh 9
Textures 7
Buildings 10
Visual impact and quality 9
Frame rate impact 8
Total score
7.8
* The above final rating is calculated from a weighted average and not the direct arithmetic average. This means that some elements of the review will have a higher influence in the final score than others.
Click here to purchase/download or more information

Tristan "Novawing24" Ayton is a highly opinionated YouTube content creator with a focus on the Simulation genre. Believing that giving back to the community is important, he provides open and honest commentary and feedback on developments in the simulation genre. He has also tried his hand at texture design, with content available at his website and at the AVSIM Library, as well as writing for numerous websites. When not simming he can be found training or competing in Obstacle Course Racing or Triathlon events around the world.
More articles by Tristan Ayton