If you’re like me, a helicopter enthusiast and a child of the 80’s you no doubt have a love for the SA342. The Movie Blue Thunder introduced us to this unique helicopter that had been around since the late 60’s, and helped plant the aviation bug into the hearts of many children. Polychop Simulations has put in a lot of work to bring this pioneering aircraft to DCS.

The Polychop SA342 Gazelle lives up to the excellent visual modeling standards set by its predecessors in the DCS world. This is the first light single engine scout helicopter for DCS, and a welcome addition to the virtual fleet. Polychops gazelle is a very elegant looking machine. They did a great job capturing the flowing lines of the Gazelles unique profile. 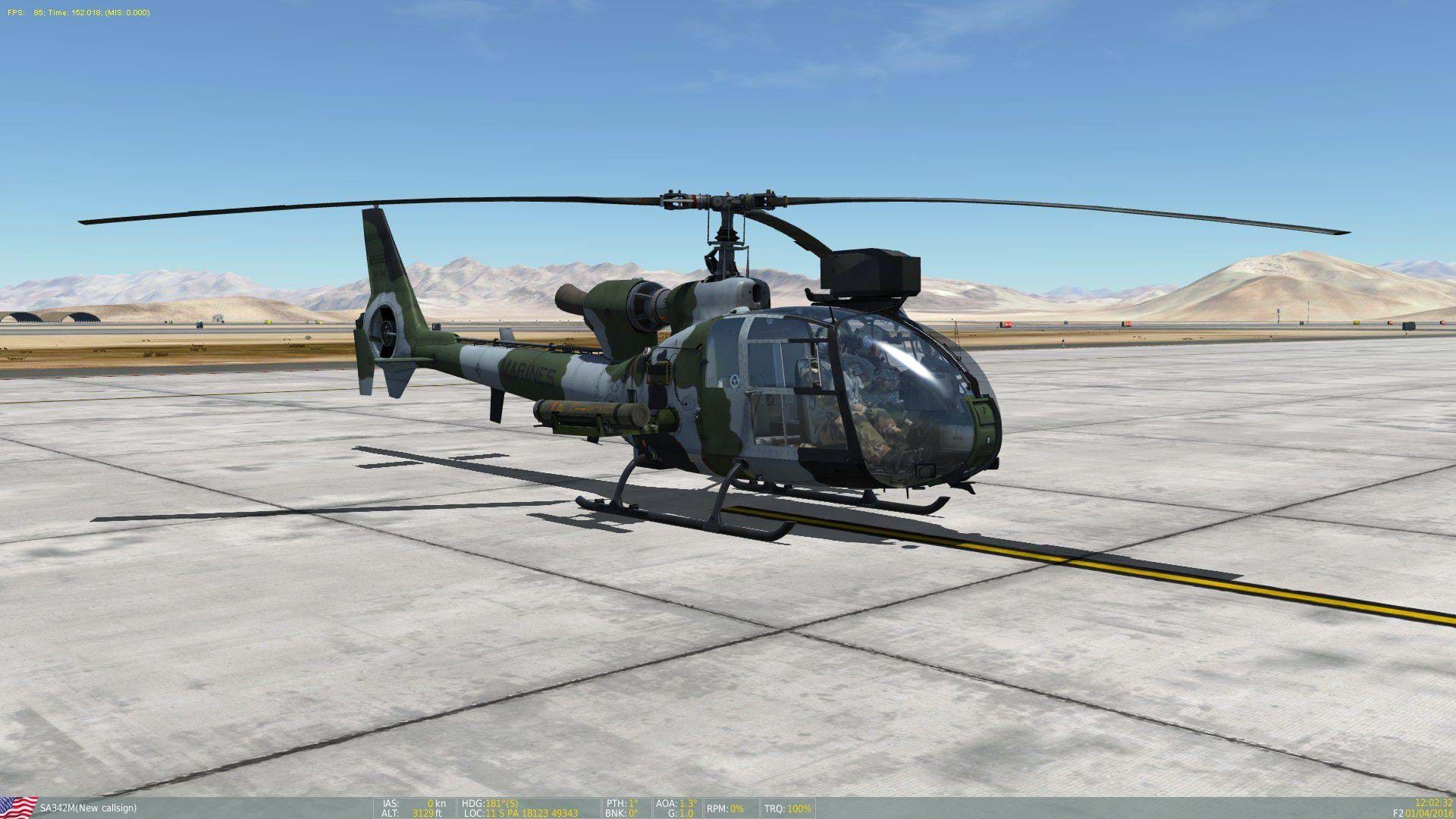 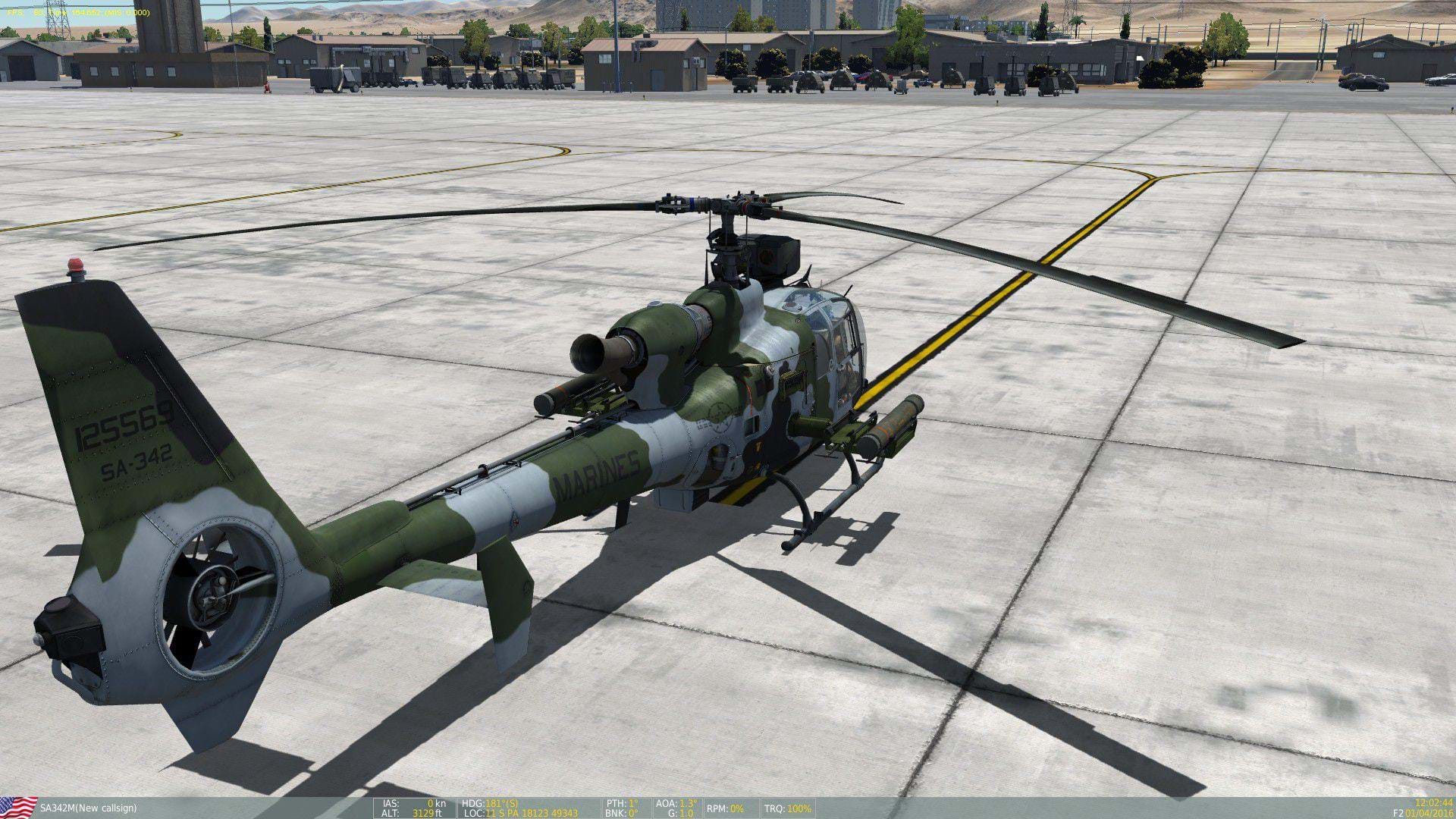 There’s all sorts of details to look at. External wiring for flare dispensers, clamps for the engine exhaust, as well as sight gauges, refuel caps and wire mesh for the engine inlet and avionics bays. 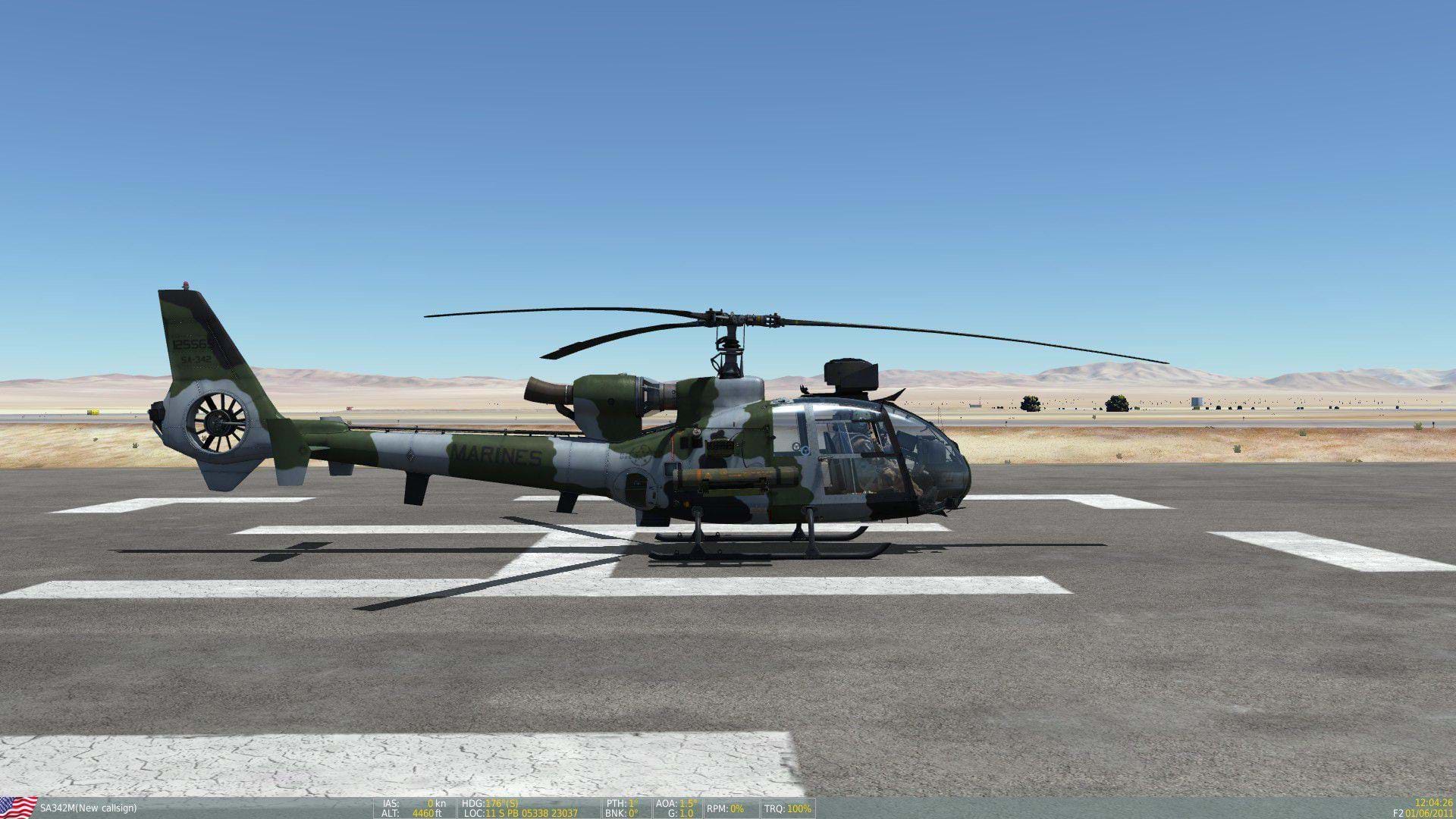 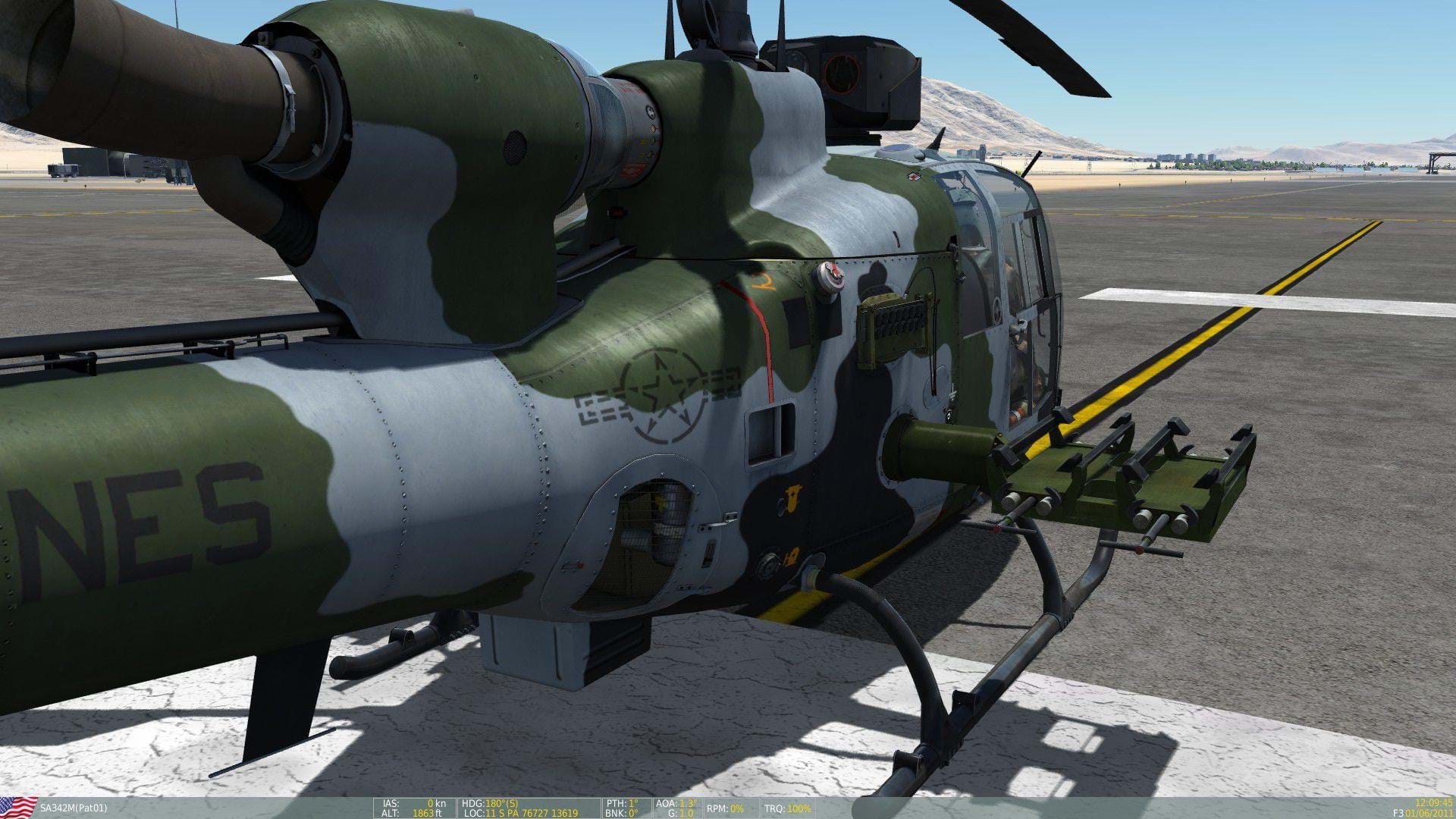 The biggest thing that made the Gazelle so unique for its time was the use of the Fan-in-fin style tail rotor, or what Aérospatiale called the Fenestron. I’m not fluent in Français, but I’ve been told that in southern France, Fenestron is the word for a small round window. The detail on this model represents the first production Fenestron very well, with nice details on the pitch change assembly. 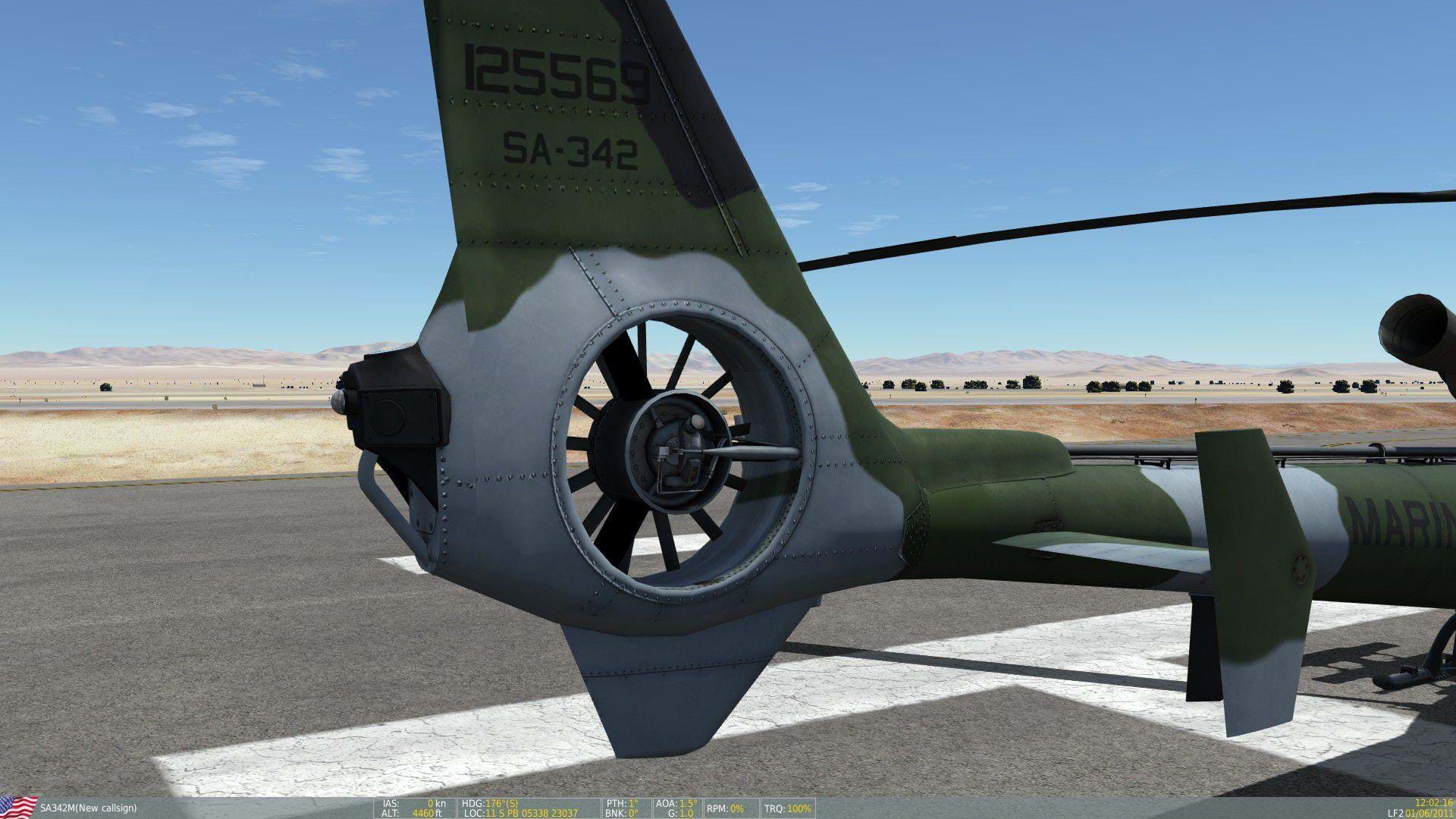 The Main rotor system is also very well done. The Flapping, feathering and lead lag hinges are modeled fantastically. Even the hoist symbol is present on the top of the rotor hub. 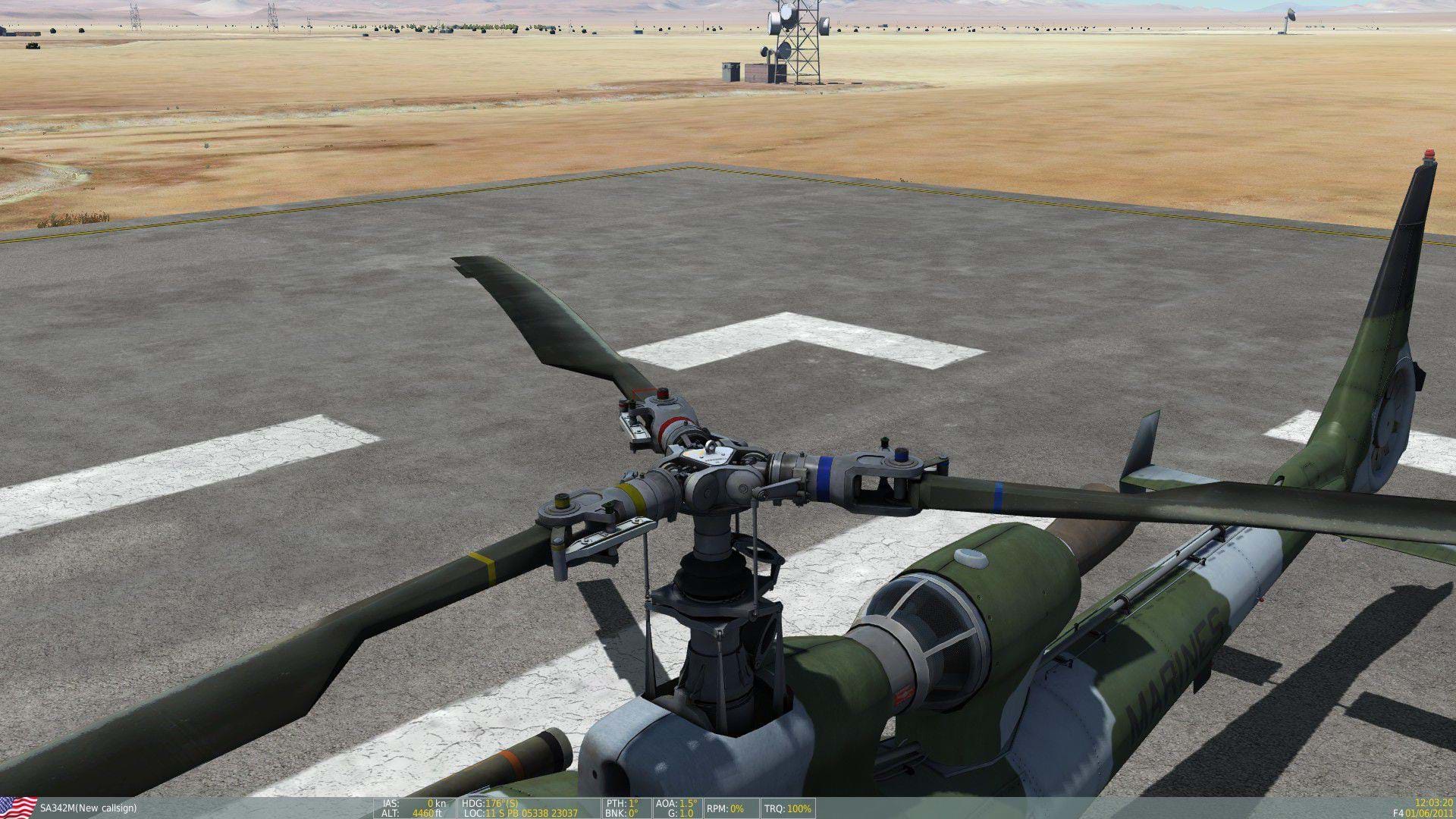 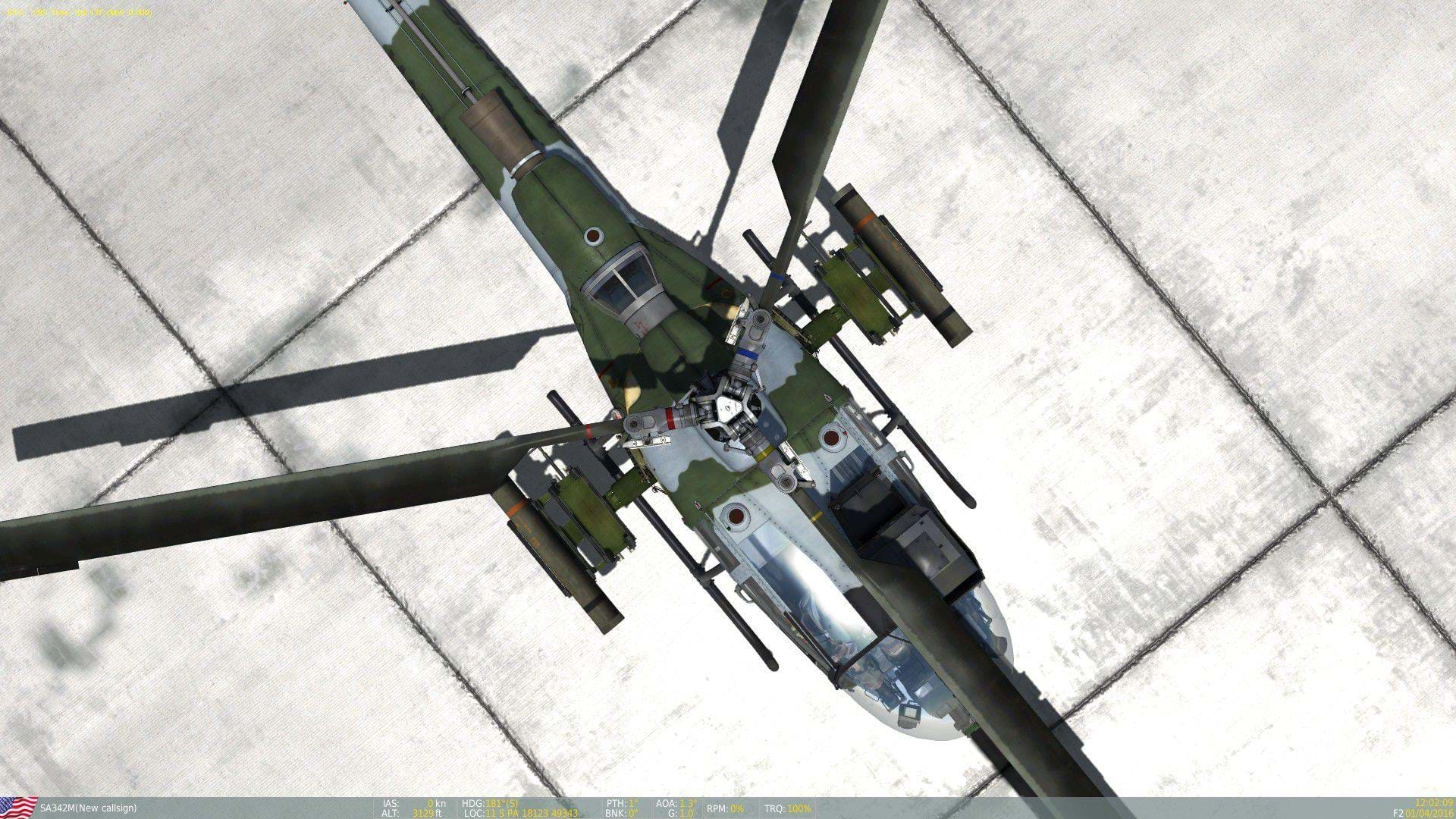 The pilot’s station of the cockpit has all of the knobs, switches and circuit breakers represented in great detail, right where they should be. All of the gauges are in metric units which may be confusing at first for Americans. It’s odd for an American pilot to get into a cockpit of a helicopter and see 300 on the airspeed indicator! 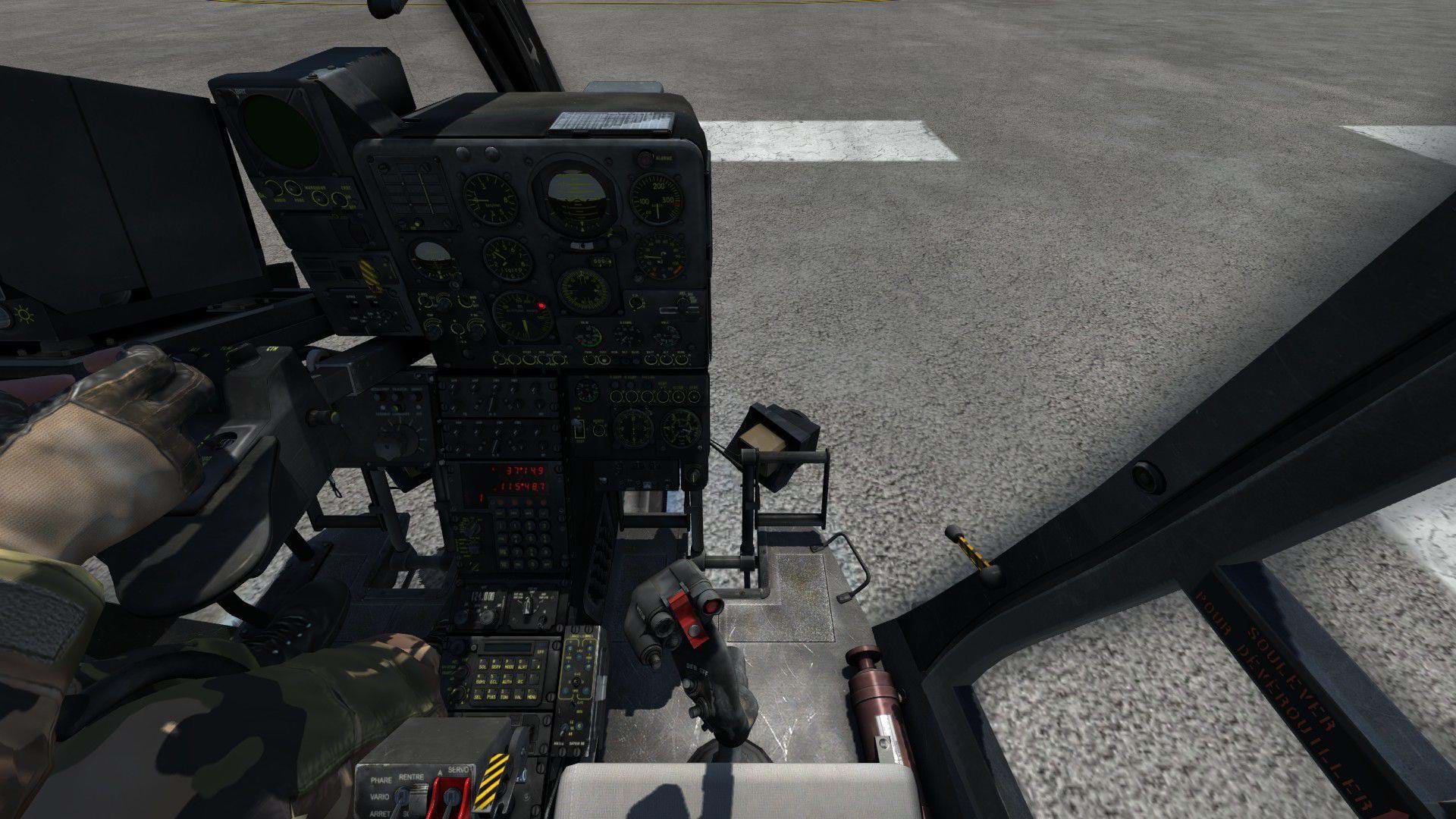 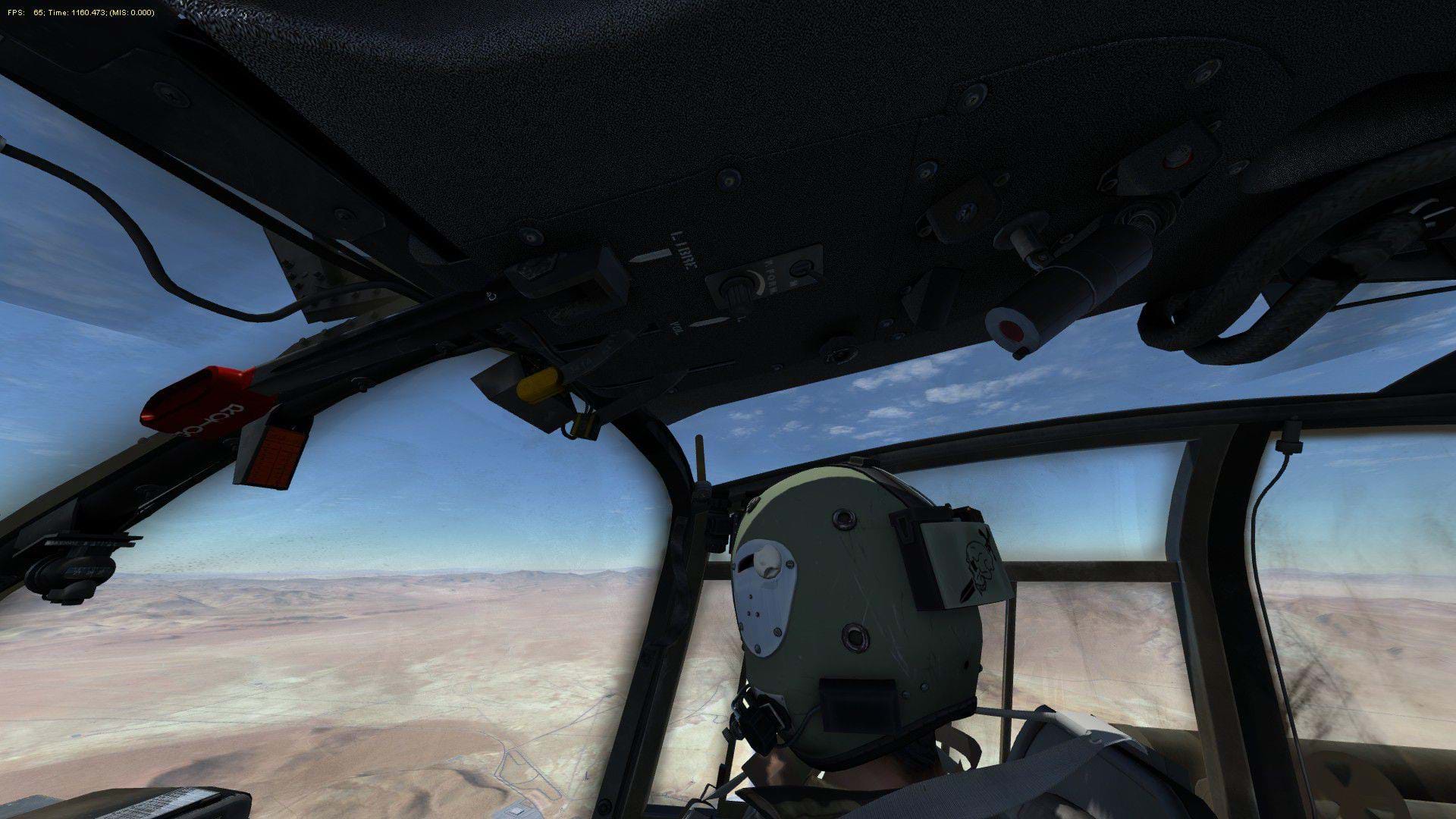 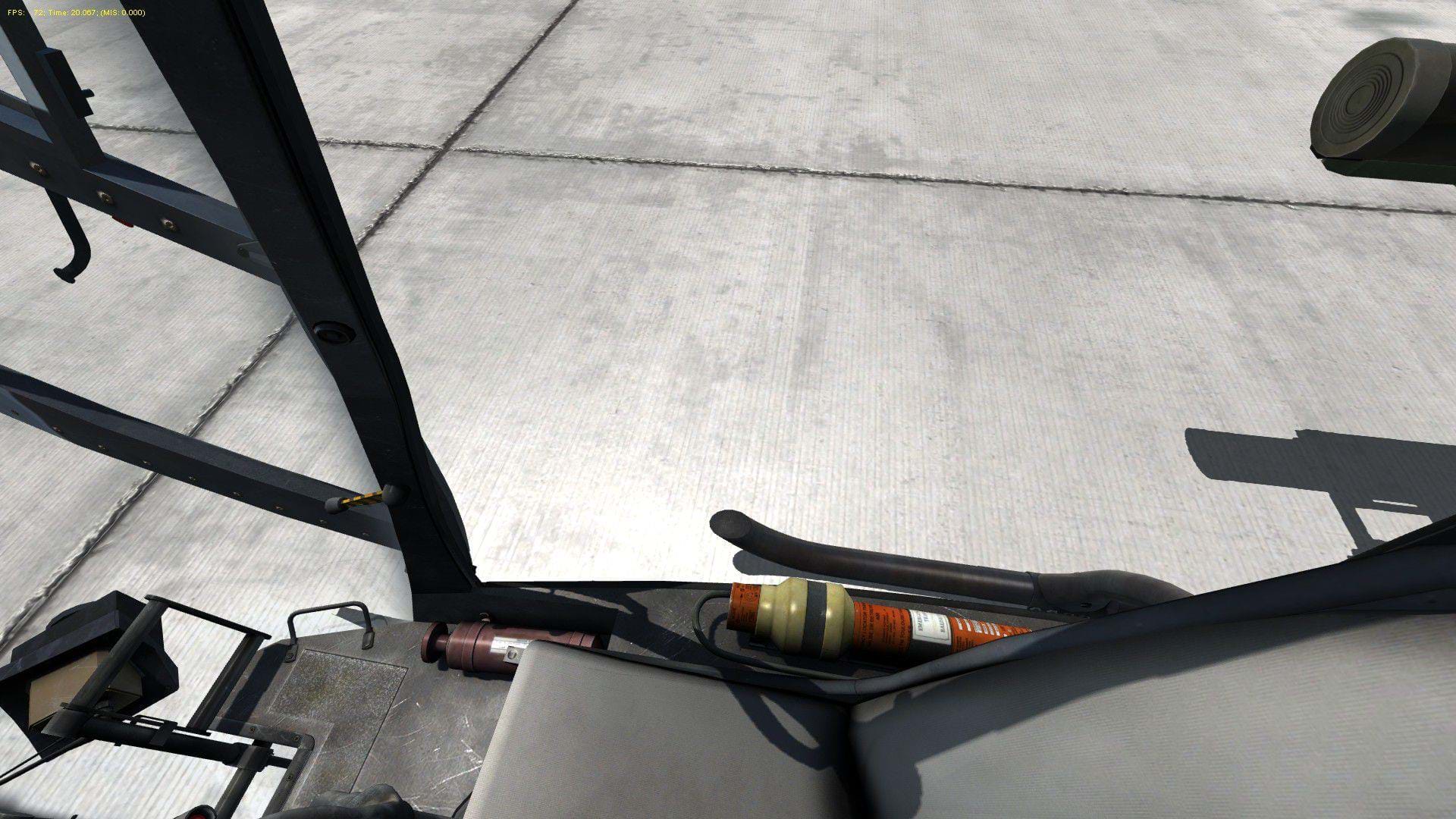 The instrument panel is a different layout than what some people might be used to. For example, the dual tachometer is positioned very low in the pilot’s field of view. In most helicopters the tach is closer to the primay flight instruments, where the pilot can keep a close eye on his rotor RPM. In the SA342 it sits at the very bottom right hand corner of the instrument panel which was an interesting choice for the engineers at Aérospatiale. Polychop, stayed true to their source and put their tachometer in the same place Aérospatiale did.

The Copilot/ Gunner station is also very well done, but well get to that later on in the review.

The quality of the sounds used is very high quality, all of which sound like they are recorded from an actual SA342. The pitch of the engine modulates appropriately in accordance with power changes, so does rotor rpm.

The SA342 isn’t a super complex attack platform. Not unlike the UH-1, it was designed for one use, and then adapted for another. In this case this was originally intended as a scout/liaison aircraft, then adapted into a tank killer a little later. Keeping with it’s humble beginnings, there isn’t much to the Gazelle, but that doesn’t mean that the aircraft systems aren’t modeled well, quite the opposite. There are some great little details that I found very impressive.

The Polychop’s SA342 has all the clickable switches you would expect from a DCS aircraft. There are also two training missions that walk you through the basics of entering waypoints into it’s navigation system. There’s also a separate 34 page PDF manual that digs deep into the navigation system for you hard core guys. 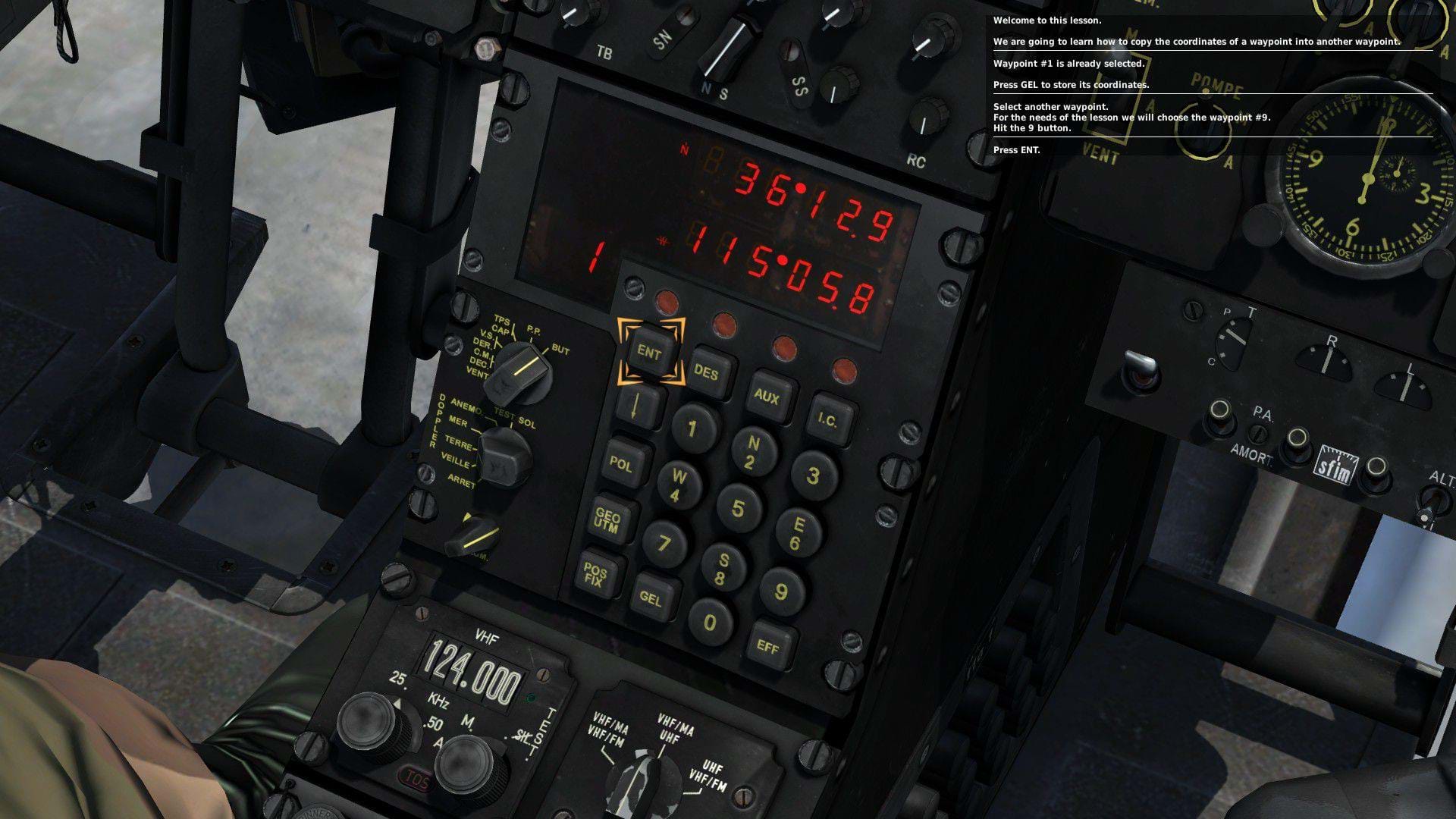 The biggest detail that was Polychop threw in that 99% of the simulation community probably wouldn’t have noticed was the accurate modeling of theTurbomeca Astazou turbine engine. What makes this engine different is that it’s what’s commonly referred to as a fixed shaft, or fixed turbine engine, as opposed the free turbine engine which is what most modern helicopters use.

The internal mechanics of this is mostly transparent to the operator, but what stood out to me was one, the simplified engine start, which the Turbomeca Astazou had long before the invention of FADEC, and the ability to have the engine at idle without the rotors moving. When you start a free turbine engine, like those equipped on most modern helicopters (without a rotor brake) you’ll notice that the rotor system slowly starts to move and soon as NG or N1 (the engines compressor) gets up to speed before fuel is introduced. This isn’t always so on a fixed turbine, in which the clutch doesn’t engage until the drive shaft RPM is somewhere above idle. Not a detail most would notice, and it doesn’t have much effect on the user’s experience, but it goes to show just how dedicated this development team is to accuracy. 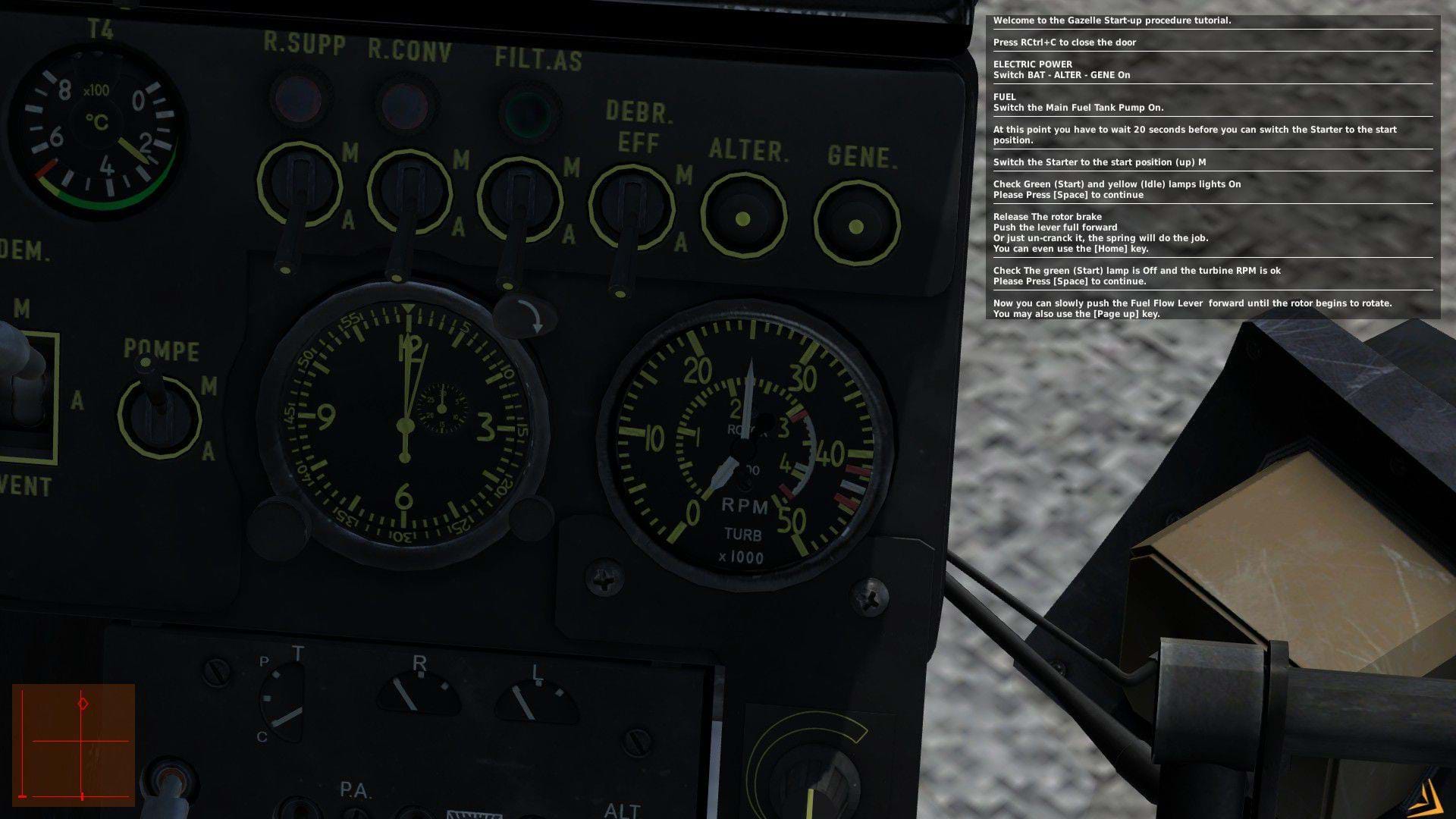 The Gazelle is a light single engine helicopter intended for use as a scout aircraft. This means it’s supposed to be agile and responsive. and Polychop made sure their model was, indeed, agile and responsive! If you’re coming to the SA342 from the UH-1H, be prepared for a helicopter that isn’t nearly as forgiving as the Huey. Over controlling, or rather, not over controlling is probably the hardest part of learning this aircraft. 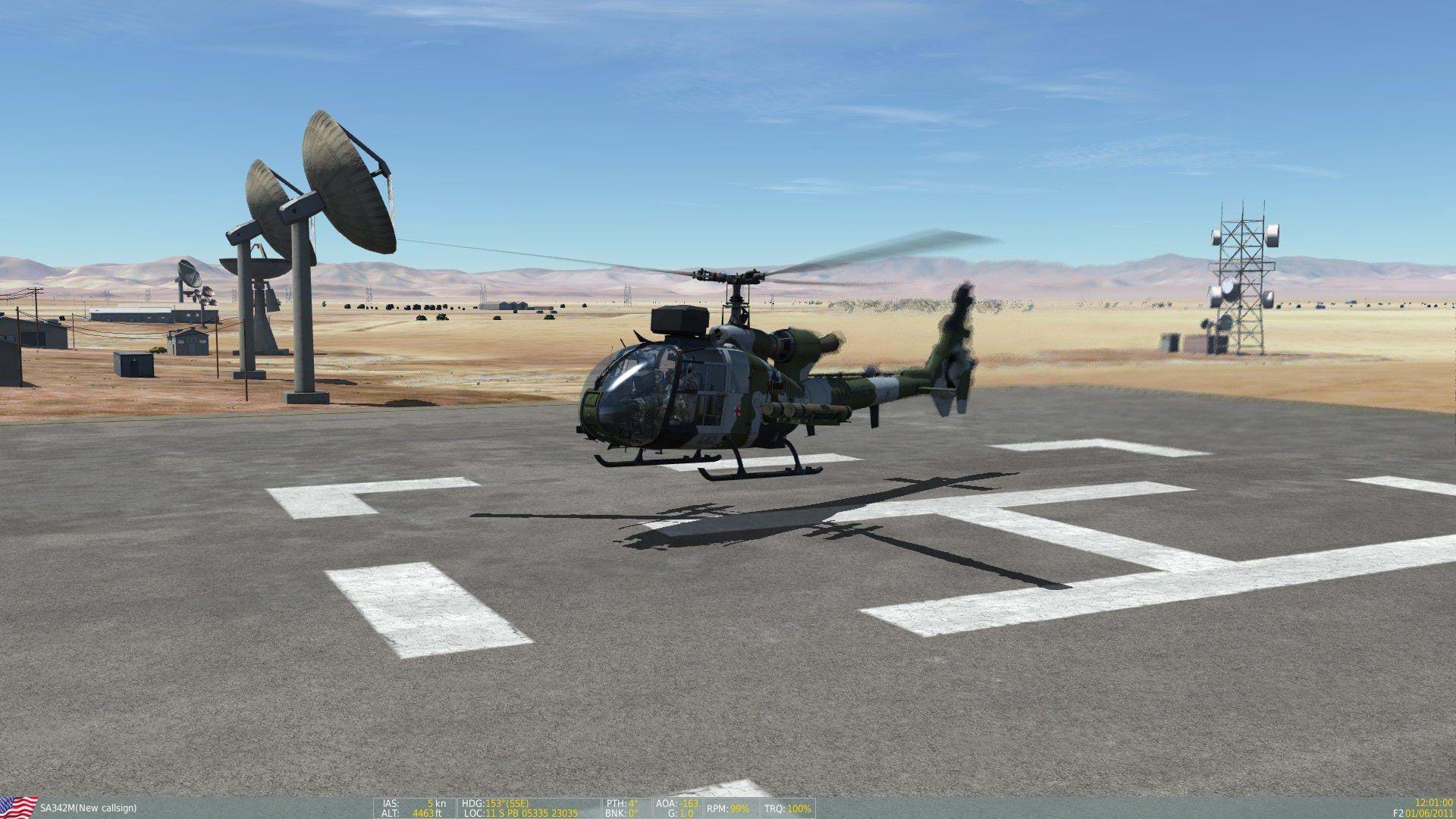 It took me almost an hour of practice to be able to lift this aircraft vertically to a stable IGE hover without bumping the tail on the ground. The aircraft naturally wants to drift forward, and if you make too much of a correction with aft cyclic, you’ll likely hear the tail strike the ground behind you. I don’t know anyone who has flown a Gazelle in this configuration, but I don’t think this is very accurate. Either way, don’t be surprised if you get a look like this from your co-pilot after your first few attempts at landing this aircraft. 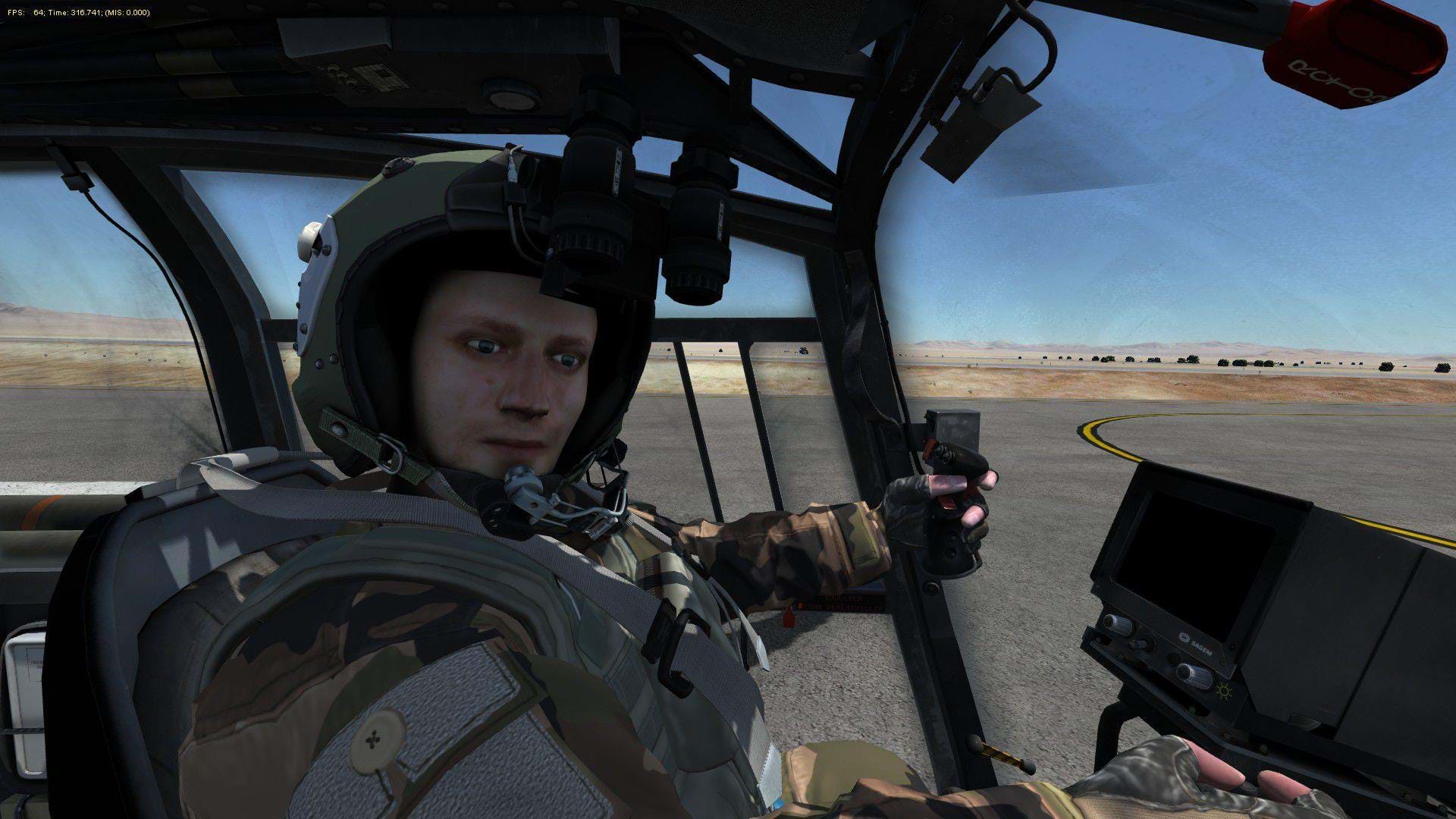 Once you get the Gazelle into level flight it’s a pretty solid platform. Low level and contour terrain flight is very easy thanks to the great visibility. But, again, this ship is not very forgiving when it comes to rapid control movements. So be careful when doing aggressive turns, it may not take as much cyclic as you think. 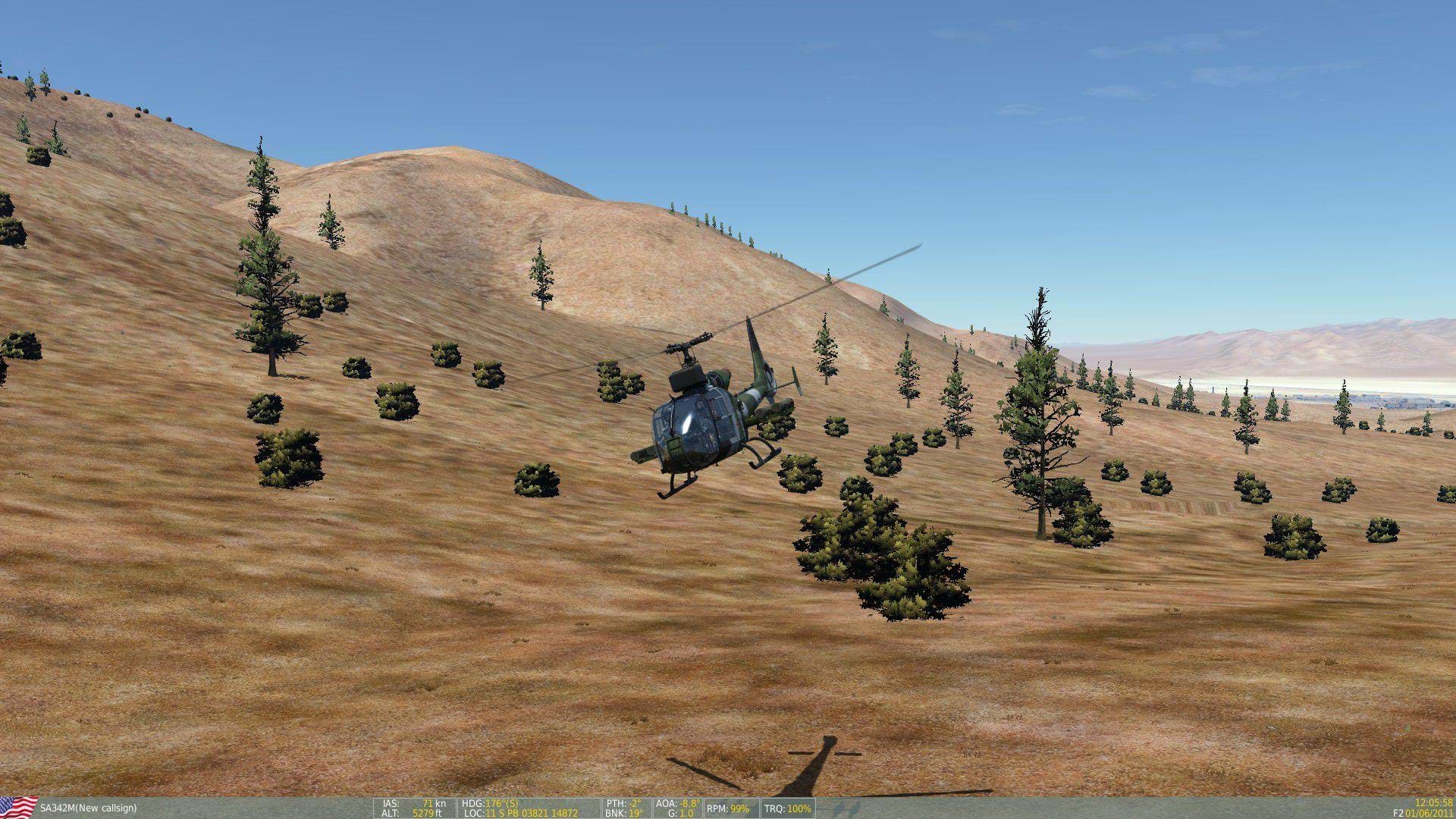 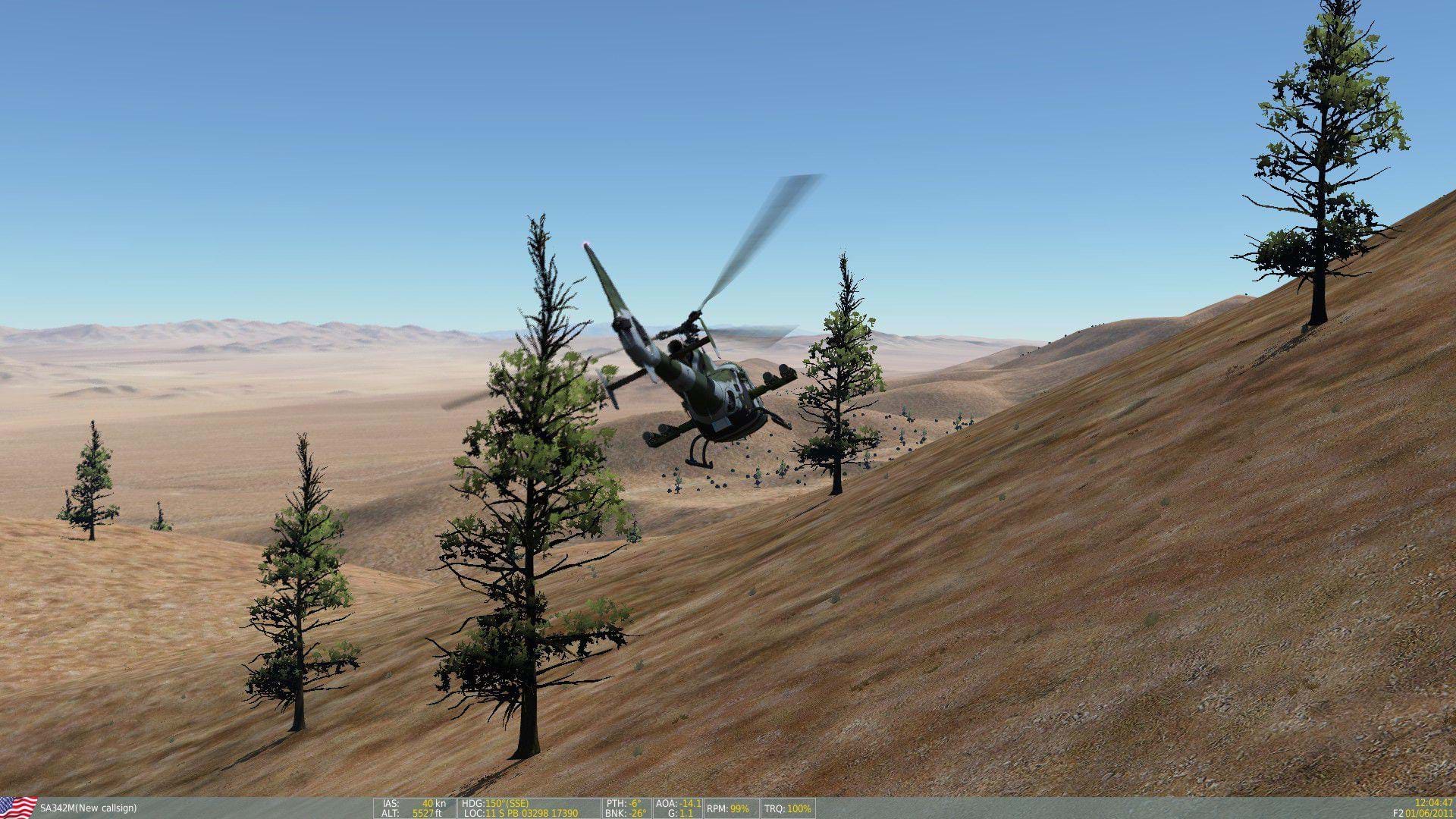 The Polychop SA342 Gazelle is in the configuration most widely used by the French Army. Over 20 countries used the Gazelle in military and combat roles, the focus of Polychop’s Gazelle is strictly anti armor [Editor's note: Polychop is working on more weapons to add to the Gazelle as published on their Facebook page a few hours after we published this review].

The Module comes with 4 training missions, one of which walks you through the power up and employment of the HOT3 anti tank missile system. If you’re not familiar with the HOT3 AT missile, it’s very similar in operation to the TOW missile system. They are both tube launched, and wire guided. 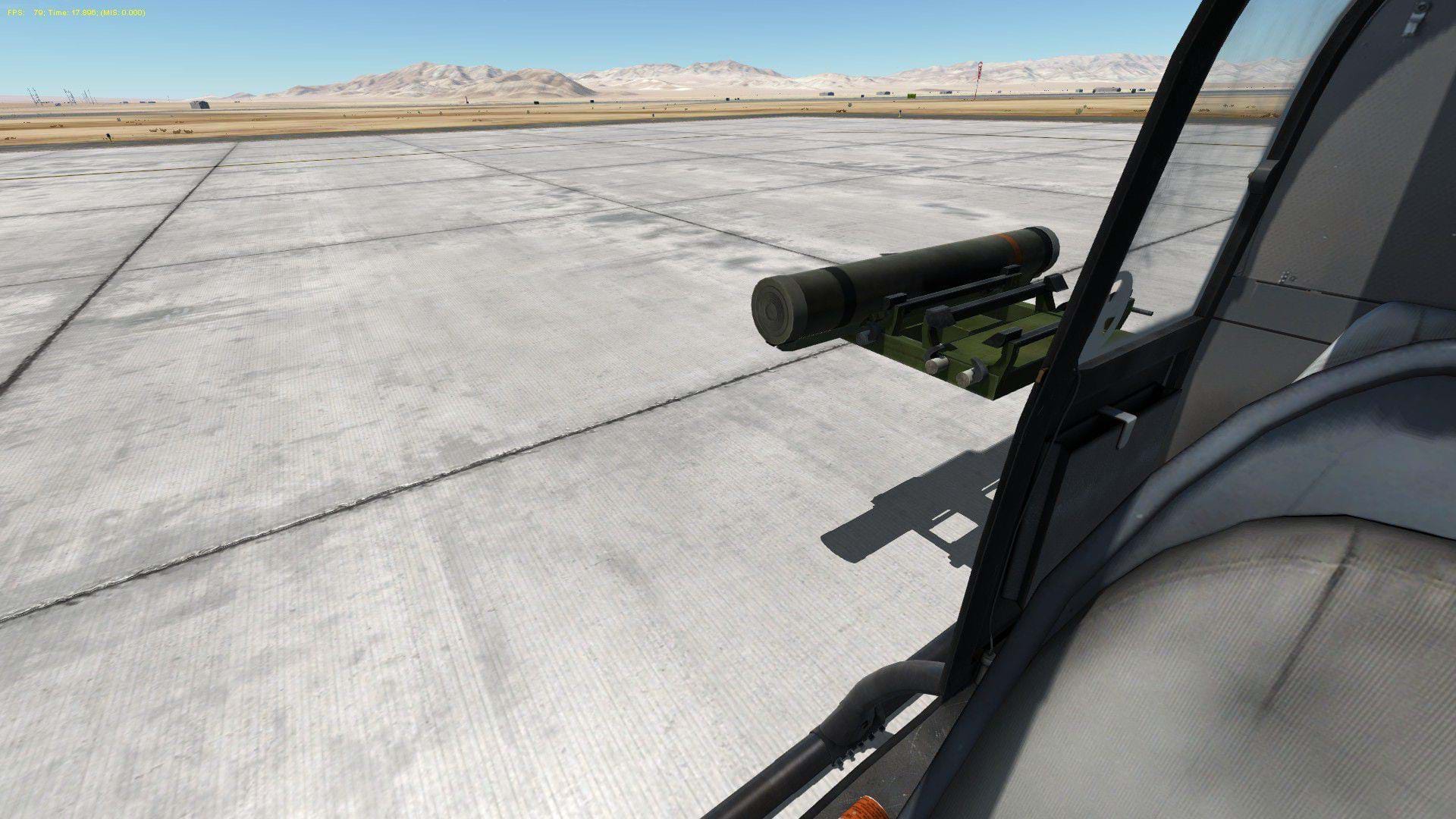 In it’s anti armor role, the Gazelle requires a crew of two. To help out, an Auto Hover mode was added. This allows the user to switch over to the co-pilot gunner station to operate the weapon system. 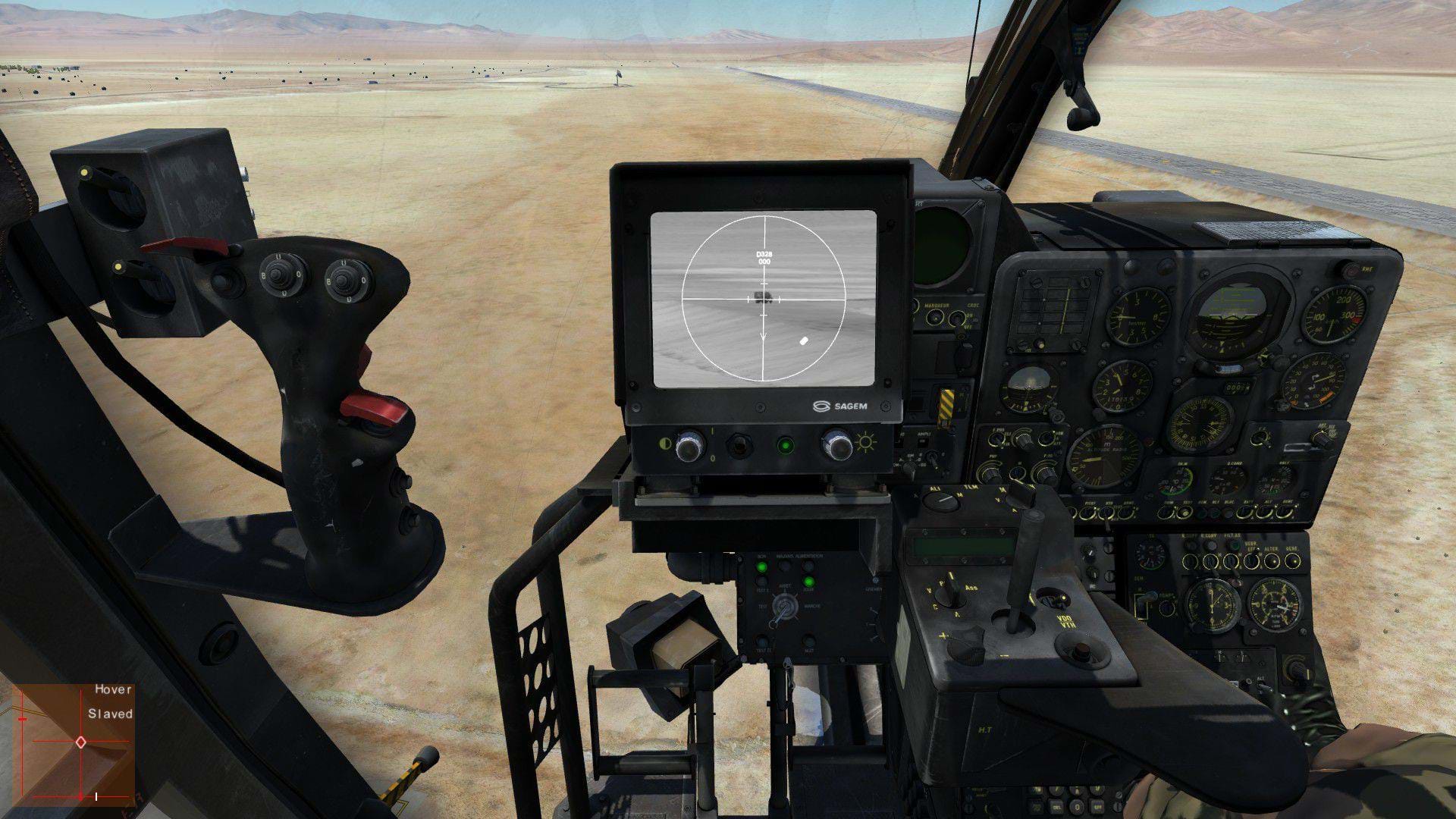 The gunners station is modeled very well. Right down to the safety covers on the laser and weapons firing button. 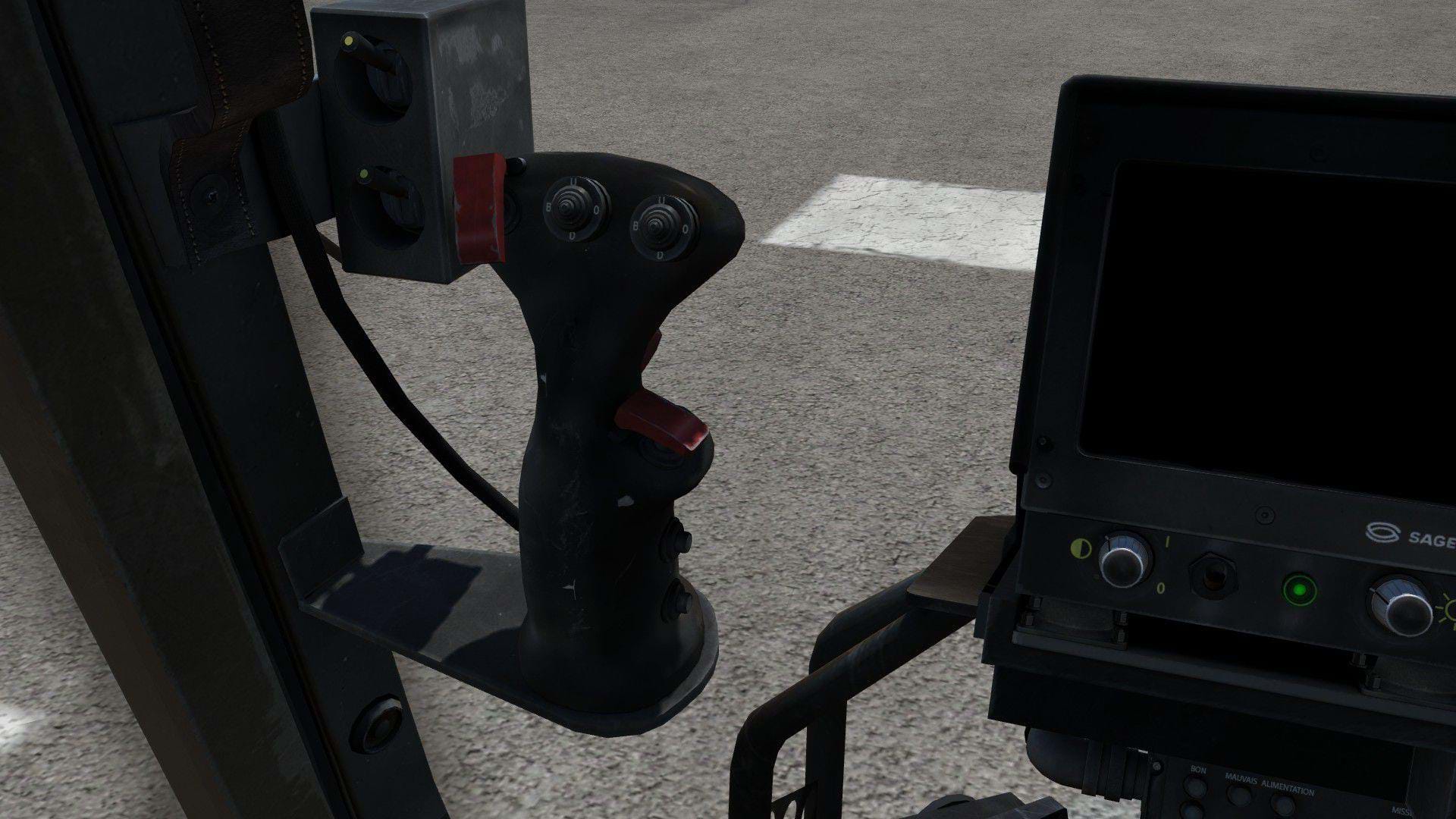 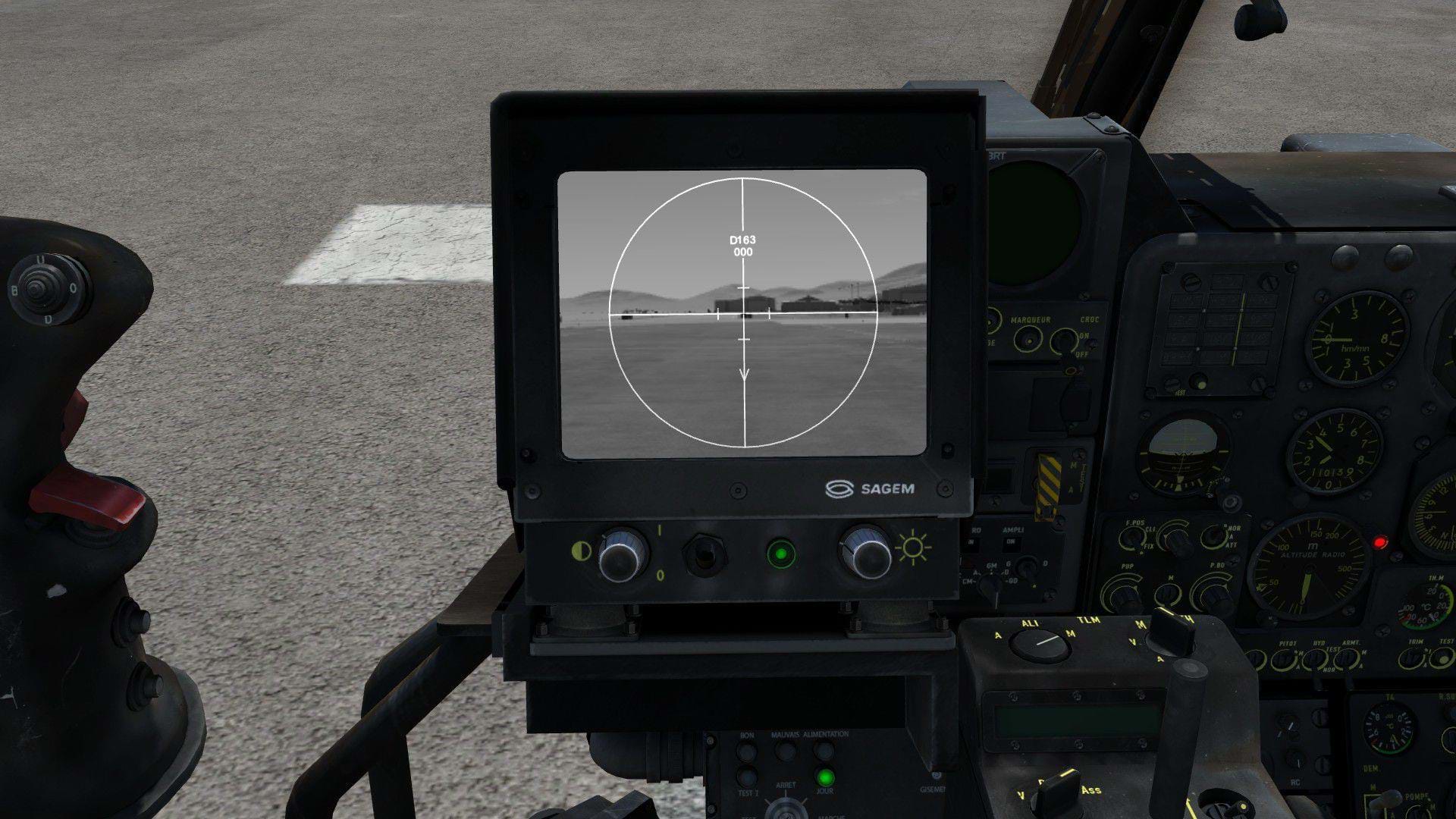 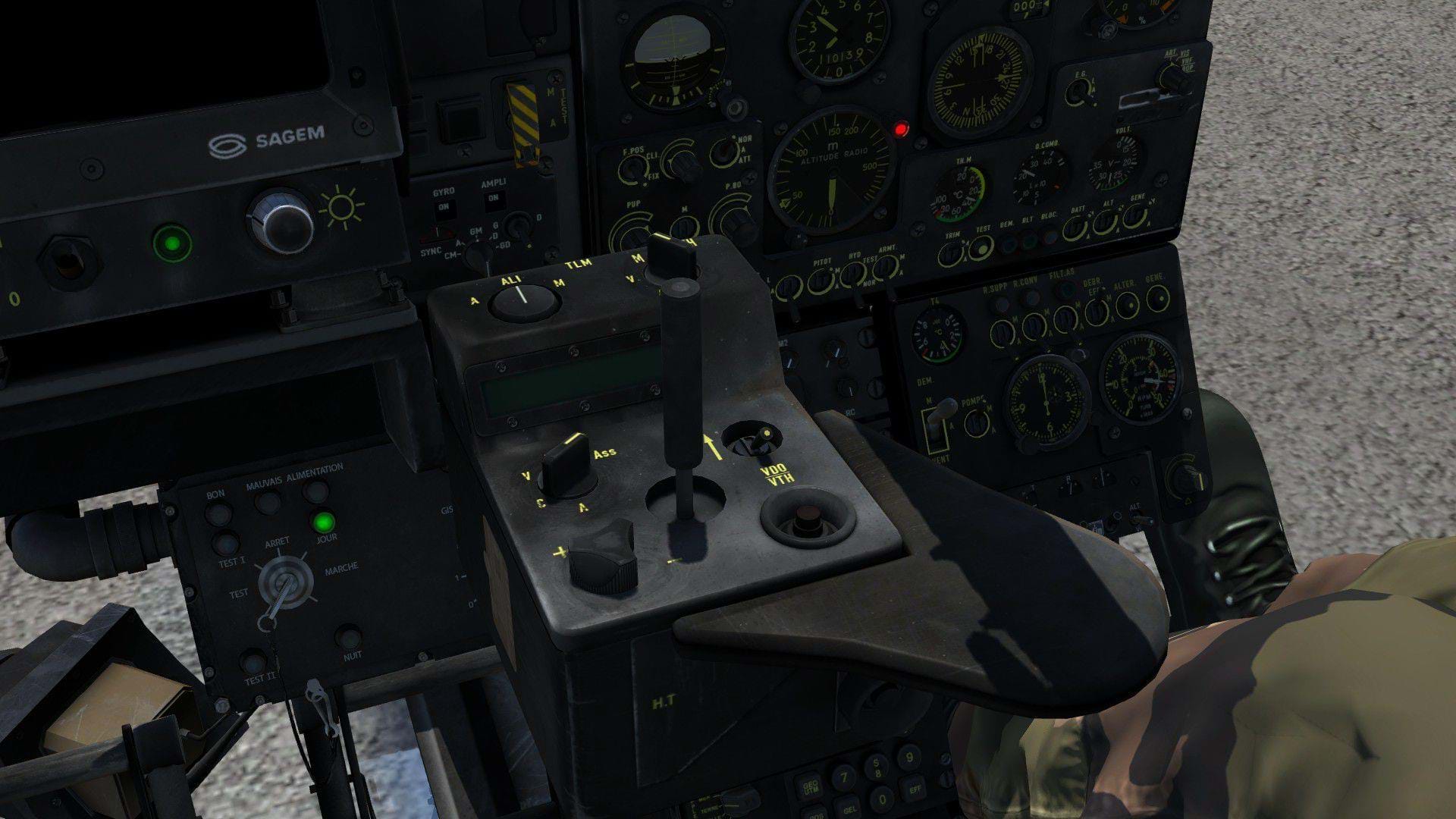 The missile sight features a Day Television camera as well as a FLIR for night operations. You move the sight around with your joystick once you’re in the Auto hover mode. After verifying the range to your target, all you have to do is shoot.

I’ve shot a few missiles in my day, but never anything wire guided. One of the interesting and cool things I noticed is that the missile launch is visible in your television screen, and it also has a flight path unlike I’ve ever seen from the laser and radar guided missiles I’m used to. You’ll see the missile porpoise up and down as it guides toward the target. It’s fun to watch and even more fun when the missile strikes its target! 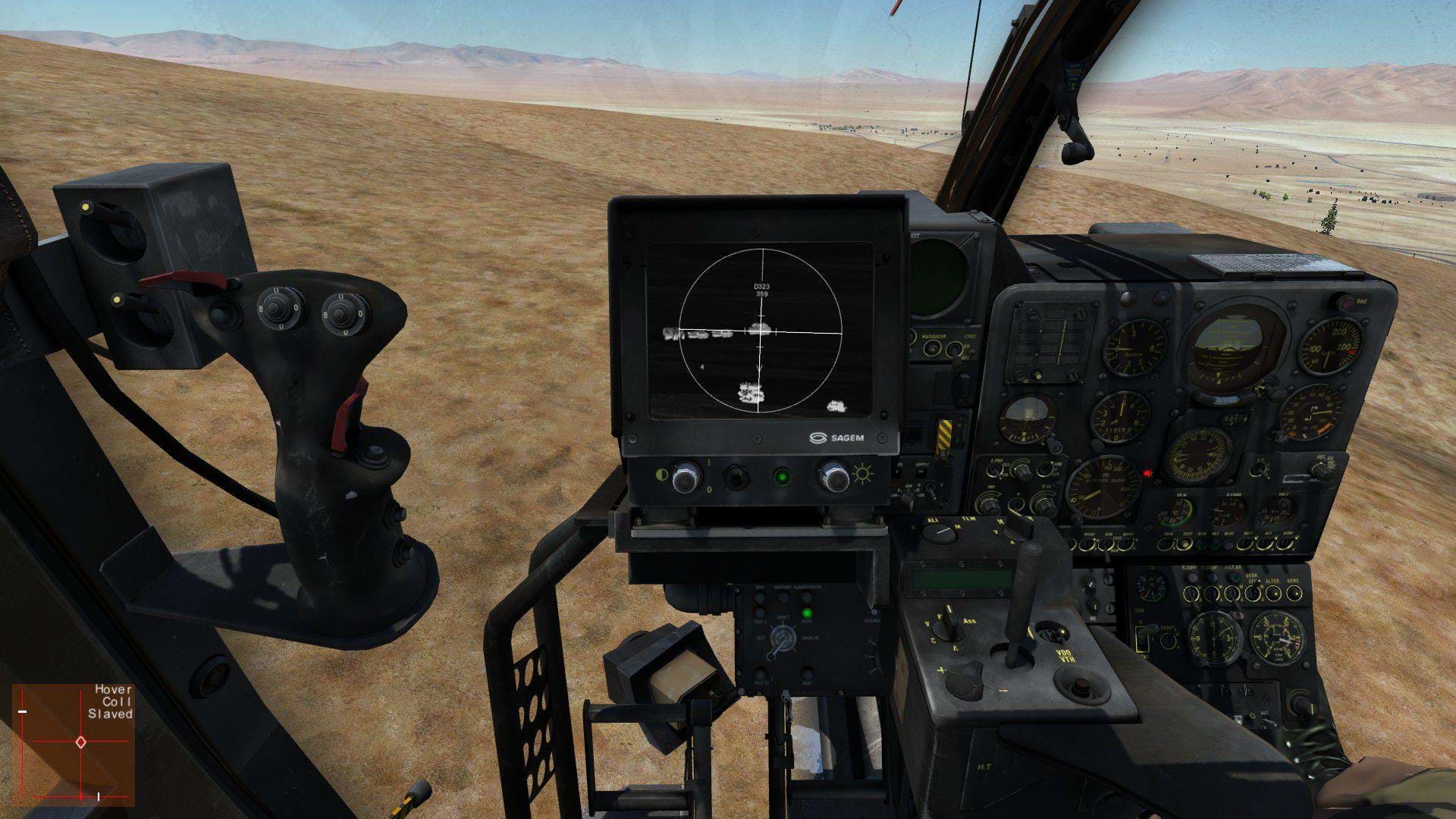 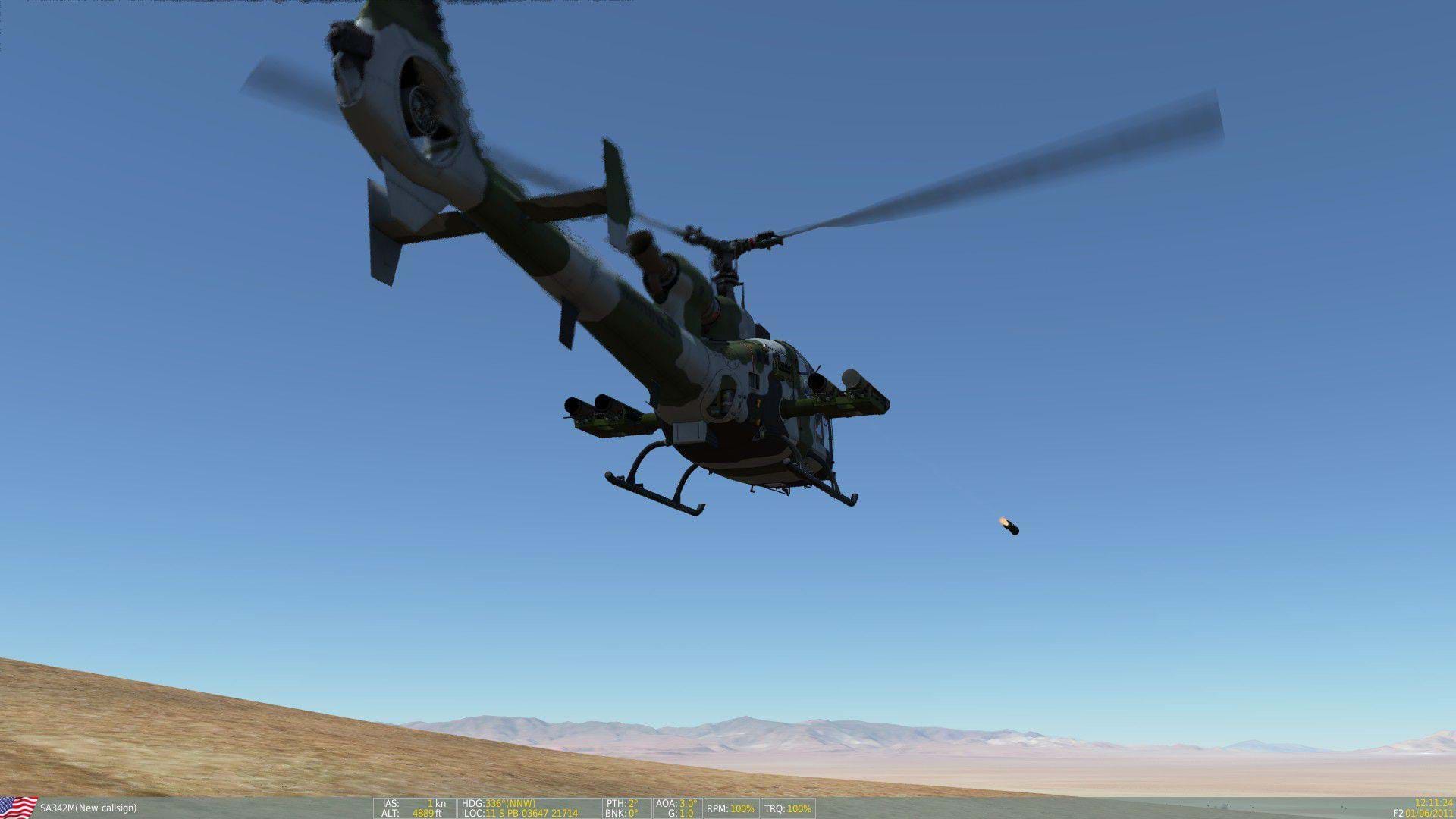 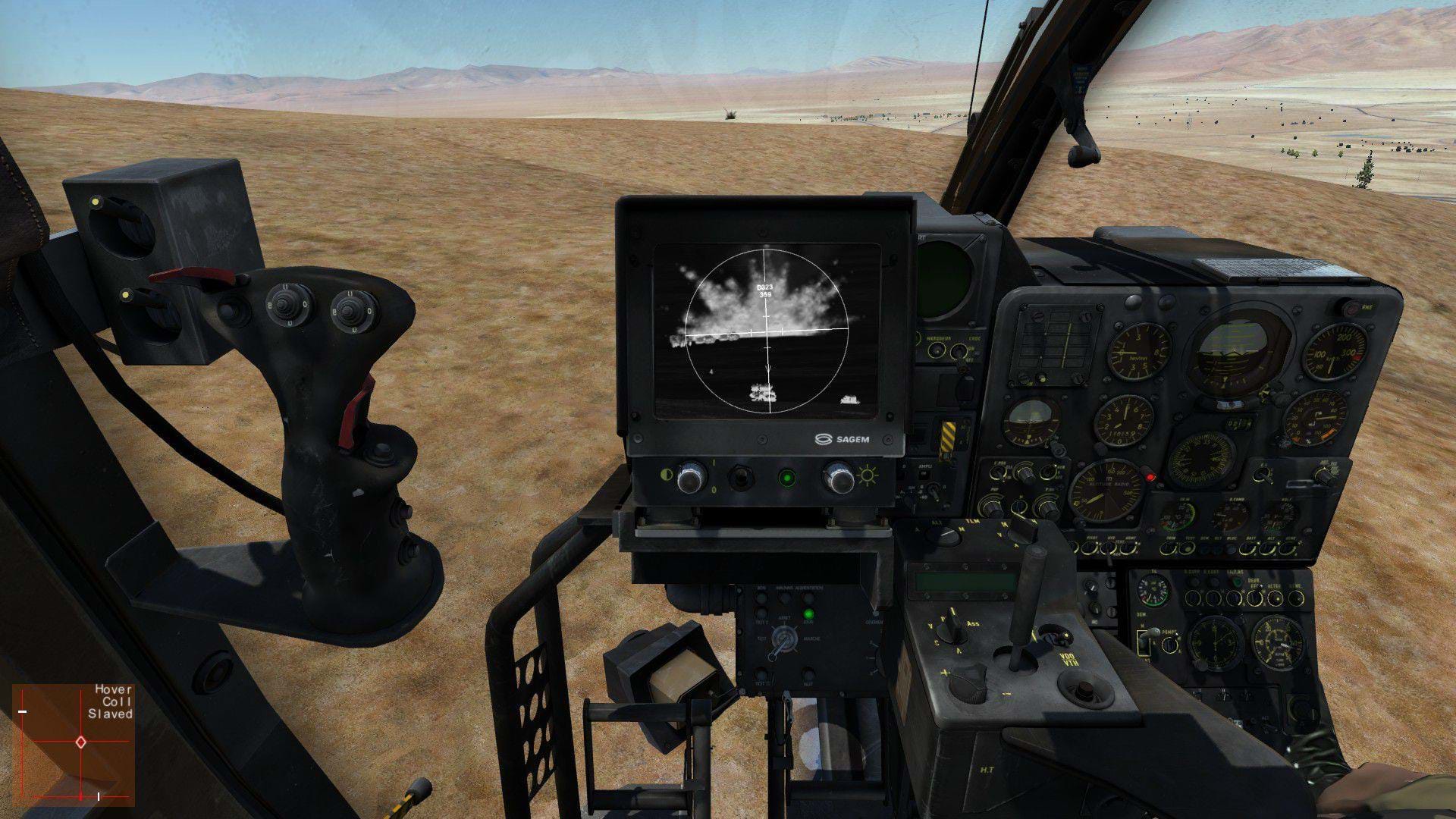 If I had one critique of the weapon systems of this model it’s that we don’t get any other options other than the HOT3 missile. Many countries operated the Gazelle in combat roles, and thus had a variety of armament choices. I would have liked to have the M.621 cannon used by the French Army as an option, just to have a variety of armament choices. Also, there’s no Blue Thunder Variant, seriously, that would have been awesome!

Where to get the SA342 Gazelle for DCS

You can get this amazing aircraft here.

Polychops SA342 Gazelle lives up to the standard of the DCS helicopter modules that came before it. Polychop did a superb job paying attention to the details of this model. Although it runs the risk of being a one trick pony, with only one available weapon load, it’s still a fun helicopter to fly.

It may be a bit overwhelming for people new to helicopters, but veteran helicopter flight simmers will enjoy the challenge of this new flight model. Auto Hover makes missile engagements a breeze when flying single pilot. Overall this new offering from Polychop is a good addition to your DCS module collection.  Now if only we could get them to make a Blue Thunder variant.

Installation 10
Model 10
Textures 9
Sound 10
Systems 10
Flight dynamics 9
Total score
9.6
* The above final rating is calculated from a weighted average and not the direct arithmetic average. This means that some elements of the review will have a higher influence in the final score than others.