ORBX continues to populate the world with their TrueEarth series. One of the latest releases caught the eye of our Oregon-born Jeff Tucker. And we had to let him review it. 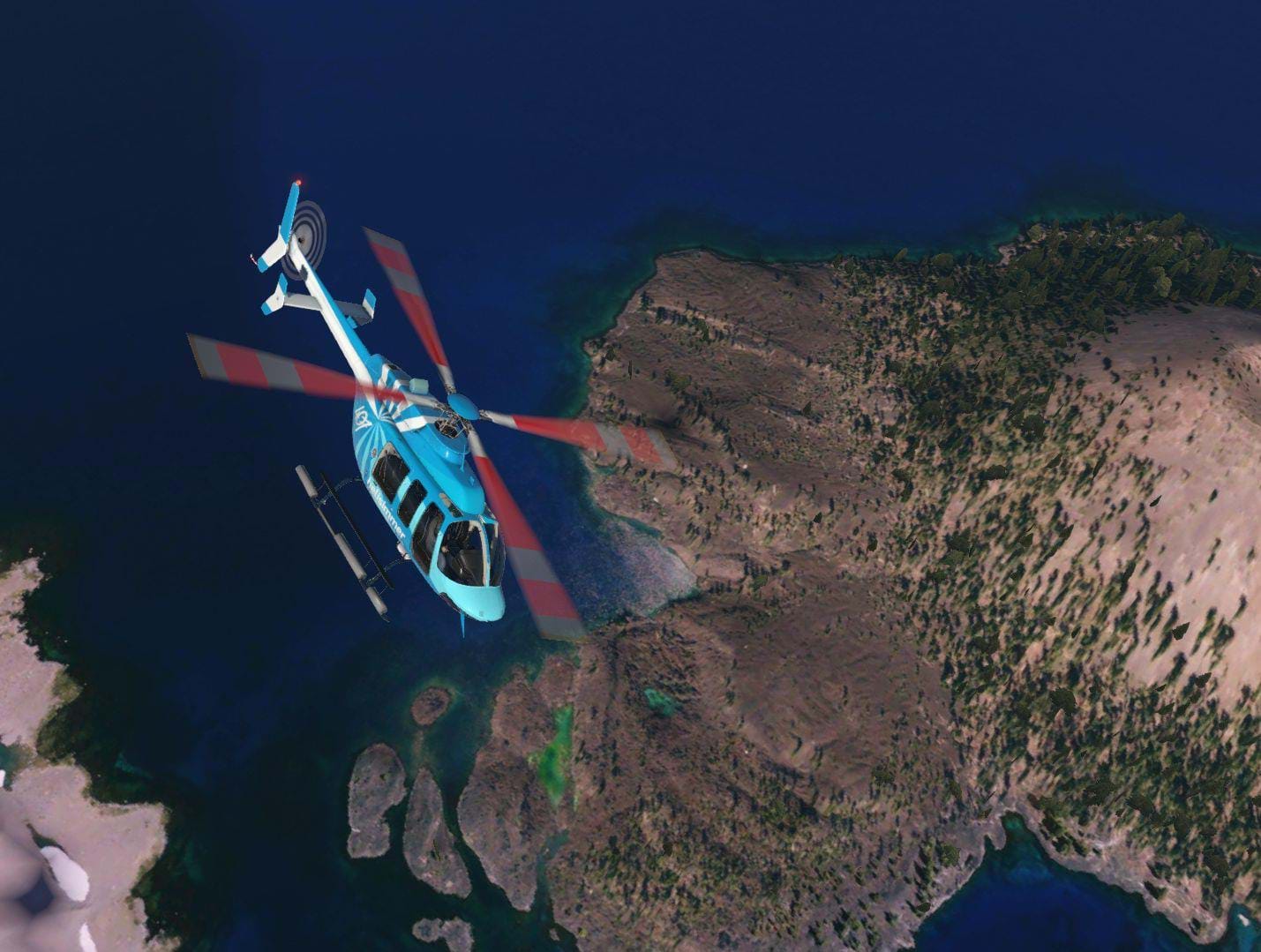 Being a native Oregonian and having done most of my flying in the Pacific Northwest, when Sérgio announced that he wanted to do a review of ORBX TE Oregon, I naturally jumped at the opportunity. Without boring you with too much backstory, the excitement I always harbored flying around Oregon in my first five hundred hours has been seldom matched in any of my other flying experiences. Oregon is just a magical place; there are few other states where you can get a taste of everything.

Let me explain what I’m on about: Oregon sits nearly smack-dab in the middle of the west coast of the United States (colloquially known as the Pacific Northwest). Divided by the coast range, the Pacific Ocean and nearly 350 miles of picturesque public beach are off to the west. Separated by the Cascades, the high-desert, painted hills and Columbia plateau climb to meet the Rockies to the east.

Crater lake and its nearly 2,000 feet of crystal blue water is to the south and cut down the middle is the Willamette Valley. The state is divided by some definitive landmarks as well. To the North, the mighty Columbia boarders Washington and joins the turbulent Snake dividing Idaho and Oregon. The massive Klamath Lake warns you before you delve into California and straddling the Valley is the Cascades. 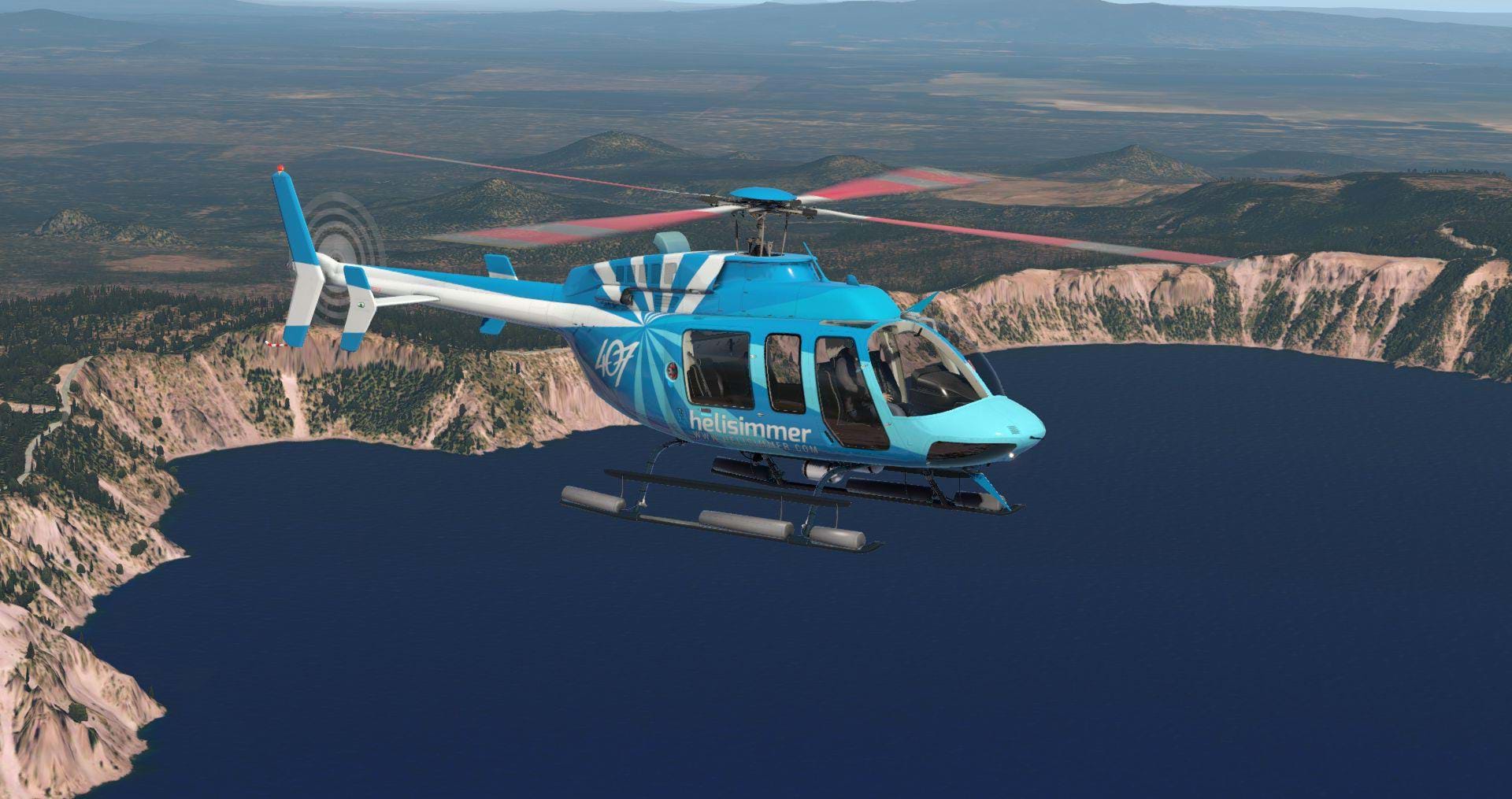 Just in case you’ve been living under a simulator rock, the True Earth series by ORBX is built for X-Plane 11 and Oregon is the fifth installment for that series. Originally starting with three releases for Britain, Washington followed shortly and then Oregon joins the group seamlessly connecting Oregon/Washington.

What’s exciting about Oregon is the level of rotary-wing aviation that stems from the area. Hillsboro Helicopters (part of Hillsboro Aviation) is based out of Hillsboro, Troutdale and Mulino and serve the Portland-Metro area. Columbia helicopters are based out of Aurora and several smaller companies serve the bustling logging community prevalent throughout the region.

ORBX utilizes LiDAR to do a ground mapping of the region and then import that data into the simulator to build the terrain whereupon, they take high definition orthoimagery (ZL17 - 1.2m/pixel) and drape that over the 10m Digital Elevation Model (DEM). Other key features include physically-based render (PBR) enhanced Portland’s cityscape, custom water-masking and over a thousand custom points-of-interest.

The result of all this? Gorgeous replication of my home state and one of my favorite locations to fly. I cannot accurately describe how excited I was to hear that my home state was undergoing the ORBX treatment. And for the most part, it did not disappoint. The hub of Oregon, Portland, was beautifully recreated and in HD, PBR glory. It was amazing to fly around and recognize many of the landmarks that I’ve not only flown over in real life but also, have specific memories for. The level of immersion is amazing.

The LiDAR and ground mapping is pretty spot on for most of the state, familiar terrain features falling into sharp relief which makes VFR flying a breeze. Although this review is specifically aimed at helicopters, in order to see Oregon in some of its beauty you really need to step up in altitude to get out over the Cascade Mountain range and see some of work done on the mountain range itself.

The foothills of the Cascades ripple as spurs and cuts slice up the mountain where glaciers had previously carved through the terrain. On the eastern side of the Cascades, Sisters, Sunriver and Bend provide a starkly different scene. High desert plateaus and massive lava flows carve through the terrain and create fantastic opportunities for helicopter pilots that enjoy ducking and diving through deep trench ravines and spill-ways.

South, Crater Lake stands out like the gem that is it. Crater Lake is well known as being the second deepest freshwater lake in America and one of only a handful (of its type) throughout the world. What originally started out as a volcano, erupted about 10,000 years ago. The central caldera collapsed, creating one of the most serenely beautiful spots in the world.

ORBX did a fantastic job catering TE Oregon for a range of different users. With the purchase of the package, the customer is provided with two different sceneries. High-Definition Oregon is utilizes ZL17-level zoom for the overlays and provides a picturesque region for helicopter and GA pilots alike. Additionally, there is a Standard-Definition provided with the package that is better suited for pilots that may have lower end systems or use virtual reality.

I tried both installations of ORBX TE Oregon and found both to be satisfactory for general aviation flying (specifically 2,000 feet or higher) and saw no discernible visual difference between the two from those altitudes. However, when down lower it was apparent that there were some changes to the overlay itself. At lower altitudes, the imagery lost definition and objects became harder to discern. 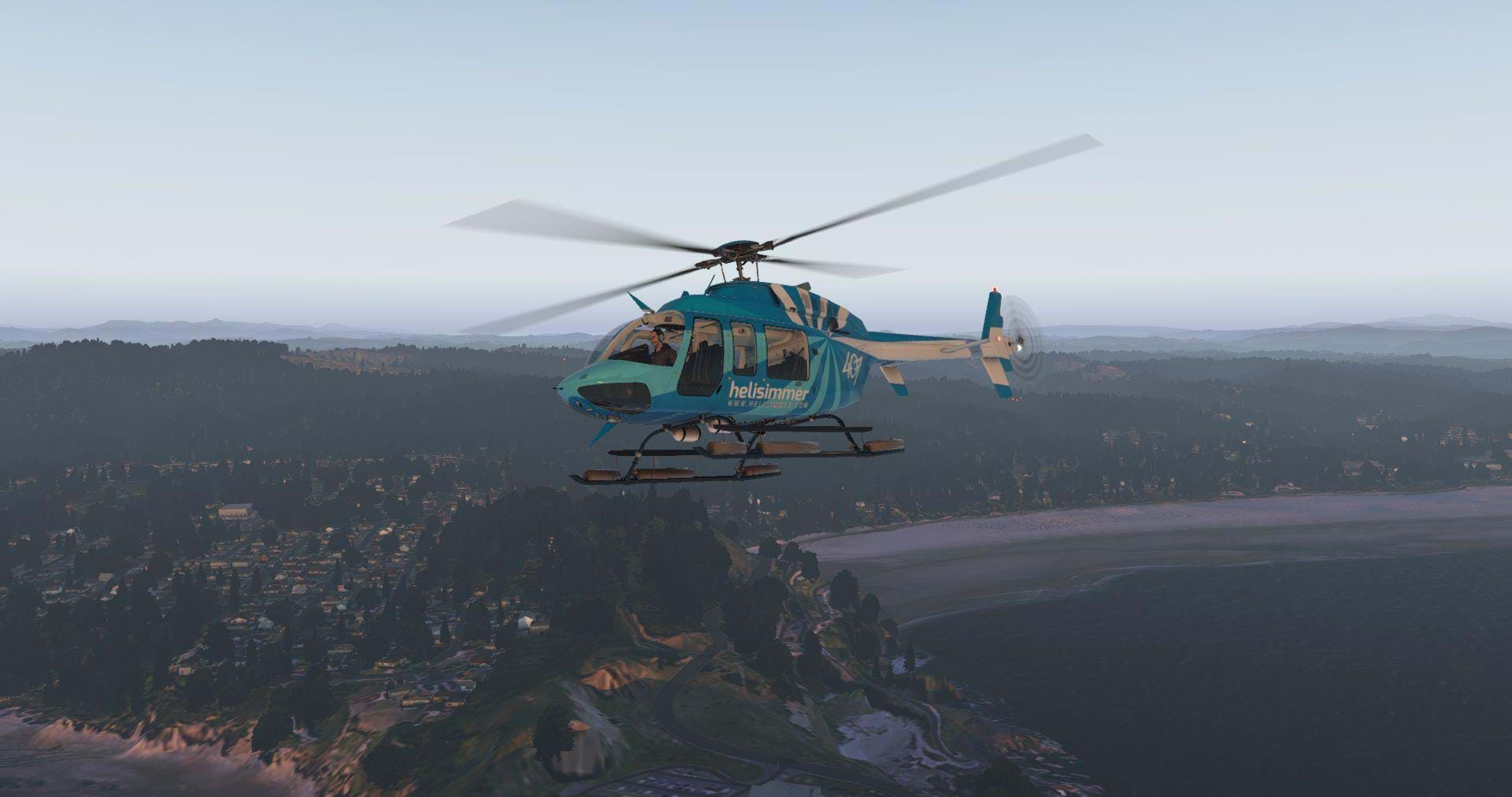 With HD in VR, I consistently saw 20+ Frames per second (FPS) in all areas except Portland where frames dropped to 15 depending on the aircraft. For aircraft that utilized high-poly count objects and multiple plugins, frames would drop down to 5 which naturally, made flying unmanageable. Switching to the SD version, around out-lying area’s and outside of cities, I would see frames easily hit 35+ but again, in Portland, frames would drop to 10.

Again, high frame rate drops would only occur with aircraft that utilized extensive PBR texturing, multiple plugins or other amenities that required lots of resources. With the DreamFoil 407 or freeware MD500, I could fly easily around Portland and the metro area with all the sliders maxed (with the exception of anti-aliasing) and still see 20+ frames consistently. If you’re a user that prefers VR or has anything less than a 1070X I would recommend utilizing the SD version. If you only intend to fly helicopters and can afford the resources, then use the HD version.

Also new to the ORBX interface and TE Oregon being my first interaction with it, ORBX Central is a refreshing over-haul to the older FTX Central interface. Whereas I consistently had issues installing TE Great Britain and TE Washington, TE Oregon installed seamlessly 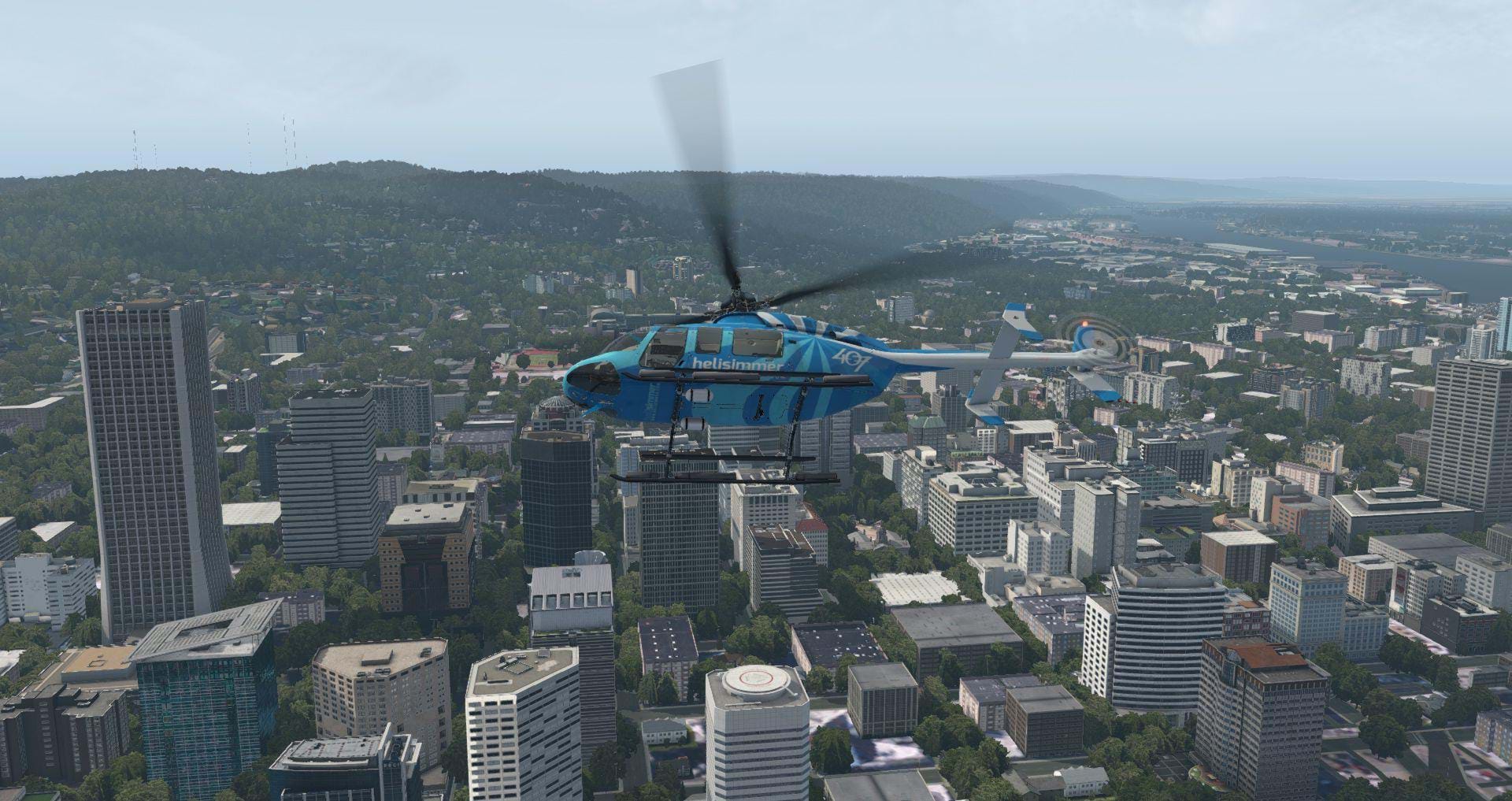 Sadly, there are discrepancies to note. Let me preface this section to also state that the same issues I’m about to discuss, are issues that I’ve noticed throughout all of the TE series. 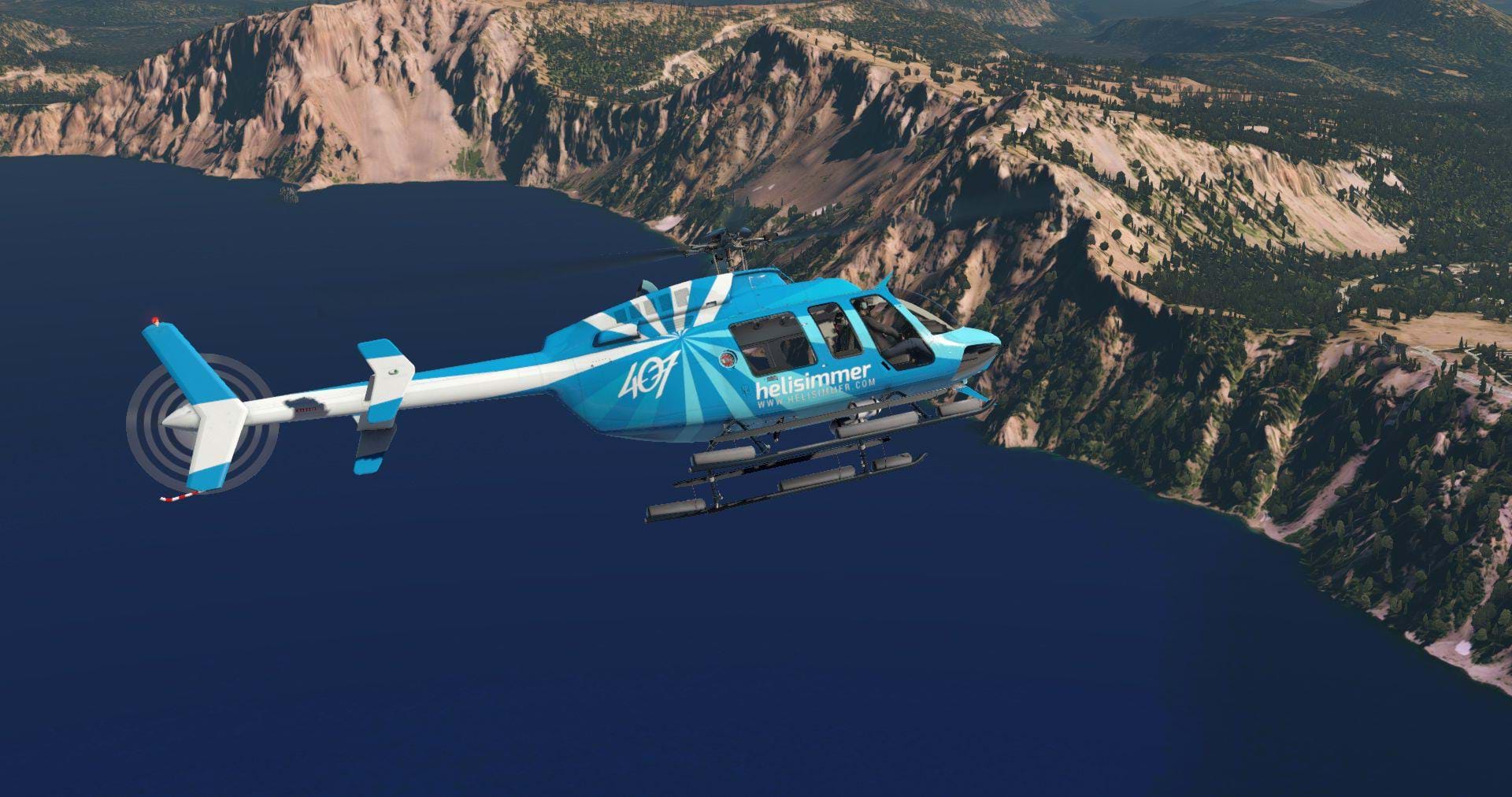 Okay, so now that I’ve beaten up ORBX to make native Oregonians happy with the review and some of our disappointments, let me wrap this review up with some more of the great.

The numerous custom POI’s are beautifully re-created. Crater Lake, Haystack Rock (Goonies never say die!!), John Day and Portland itself look beautiful and is so well made that in several instances, I almost forgot I was sitting in a simulator. The custom water masks along the Oregon coast are also well done make for some gorgeous vistas.

Is ORBX TE Oregon worth the $44 dollar price tag? Definitely. Its blends seamlessly with TE Washington and provides a significant chunk of wonderfully re-created, easily-packaged scenery for pilots of all aircraft types to fly around. Oregon itself would take a helicopter-pure pilot a few hundred hours to explore alone. Couple that with its seamless transition to Washington and almost an endless number of scenarios can be derived to fly around in.

ORBX does a fantastic job adding to a series of growing X Plane 11 sceneries which I’m thankful to see in the simulator. Despite textures being blurry or mis-aligned in some spots, the elevation data is spot on and the PBR buildings are beautiful even though they chew through frame rates. I loved the new installation process and am thankful to see FTX Central be replaced by ORBX Central. It seems like ORBX rushed this one a bit but despite that, TE Oregon is a must have if you’re from the region or enjoy flying through a diverse range of terrain. Just be ready to snag a screenshot, Oregon is one of the most beautiful regions you can fly around in.

Installation 10
Mesh 9
Textures 6
Buildings 9
Frame rate impact 7
Total score
7
* The above final rating is calculated from a weighted average and not the direct arithmetic average. This means that some elements of the review will have a higher influence in the final score than others.
Click here to purchase/download or more information 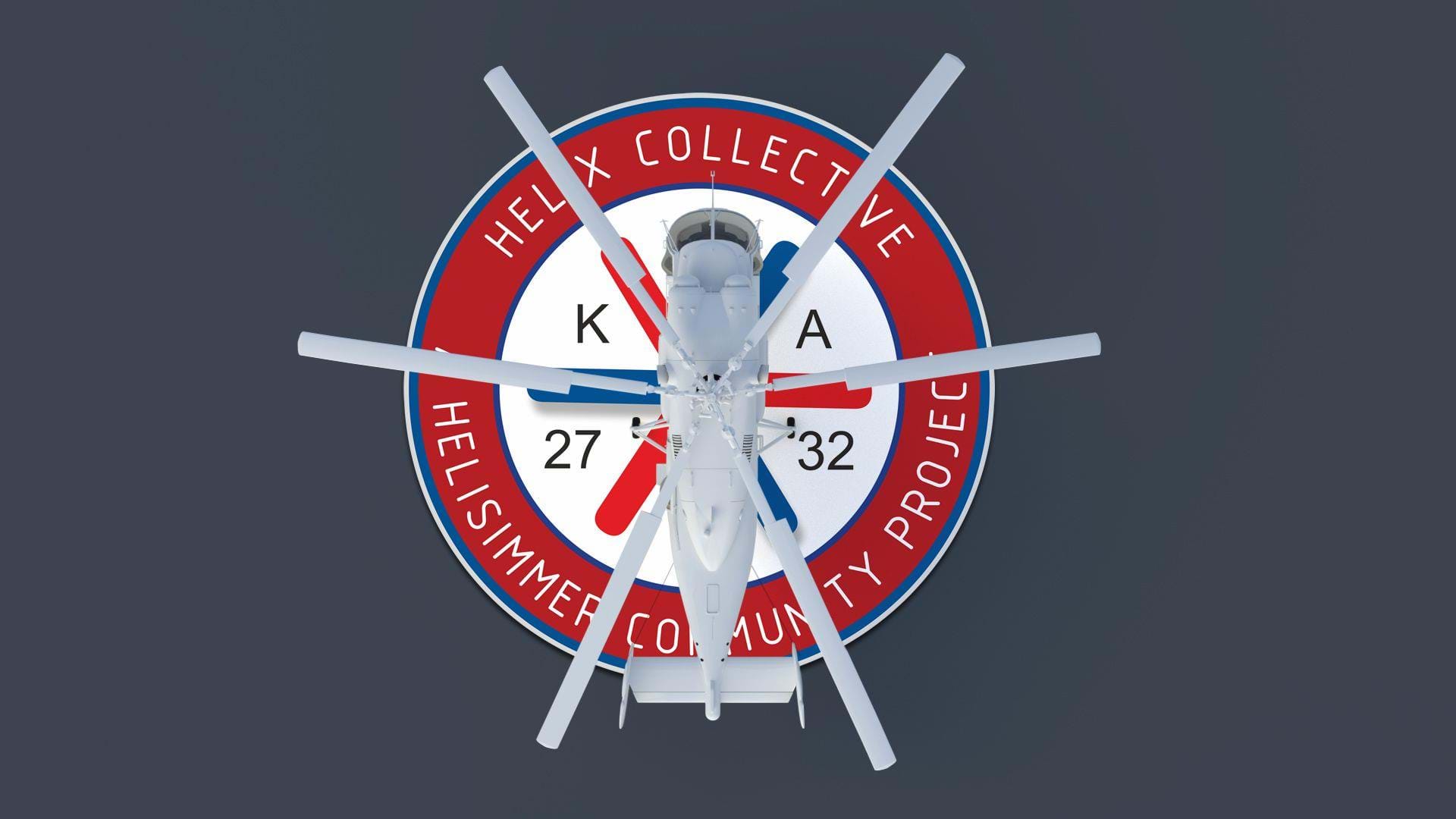