Aerofly FS2 is not exactly an all-star in the simming world yet, but it’s interesting enough for ORBX to develop their TrueEarth Netherlands for it. 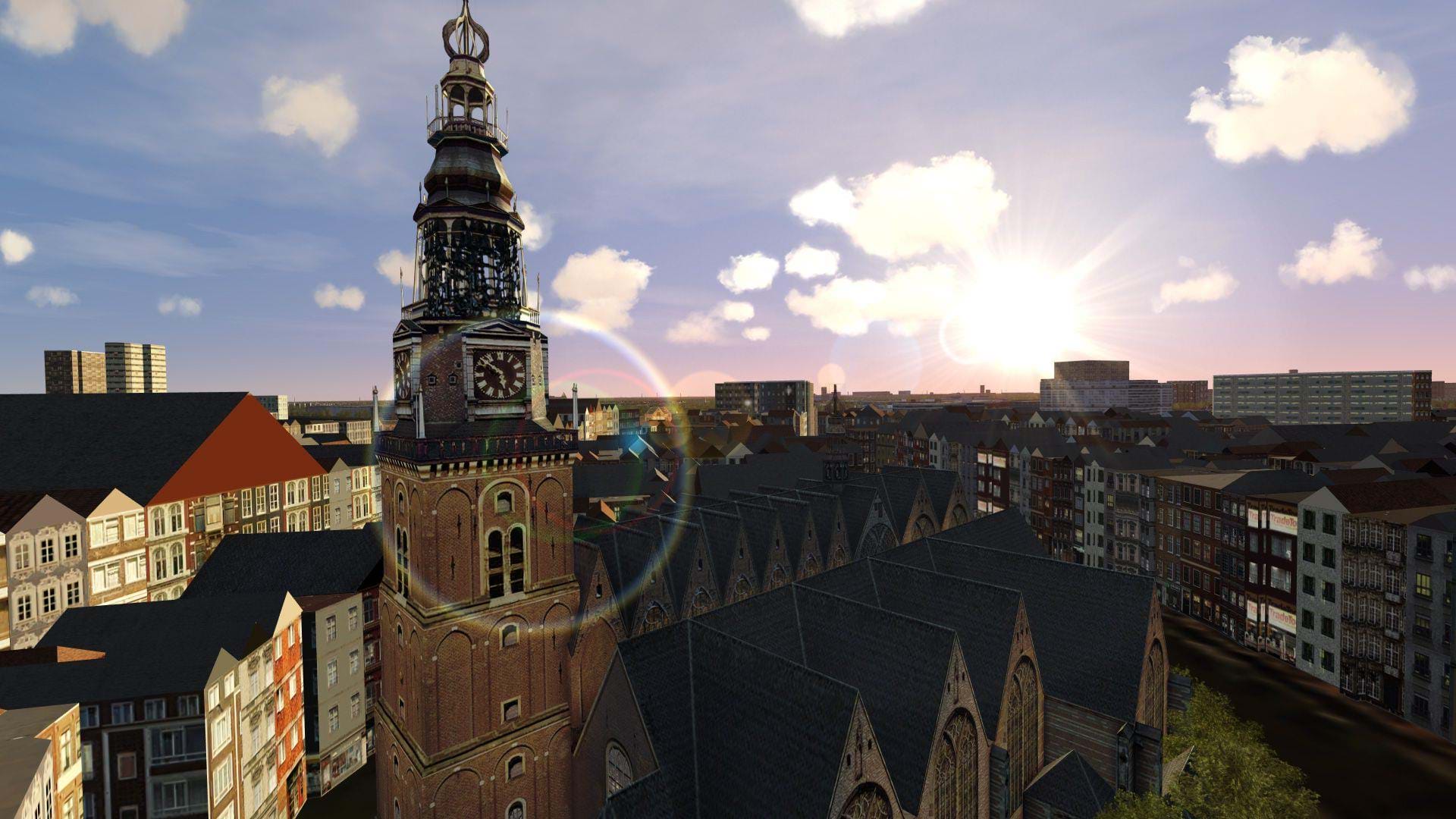 Note: this review was done using an alpha version of the AFS2 R22 which is still under development. For more information on this helicopter, read our preview.

One of the things lacking in Aerofly FS2 (other than the lack of helicopters, of course – which is being taken care of) is scenery.

Yes, you could potentially fly the world in it, cross the US from LA to Miami or do a trans-oceanic flight all the way to beautiful Innsbruck, but the sim simply doesn’t offer a full world scenery right now.

IPACS has released a few areas and, some time ago, a new player has entered the field. Well, a “new player” on the AFS2 ecosystem that is. Because the company is, definitely, not new.

In fact, ORBX is a giant in scenery development. If you are a veteran simmer and you never heard of them, I’m sorry to say you are not a simmer or you have been hidden under a (huge) rock.

You see, ORBX offers some of the most amazing and complete scenery products in the market. This is the benchmark people usually compare other companies to. “Is it ORBX-quality” is a question you often see on the social media or forums. And with good reason.

This is the first scenery from ORBX for AFS2 which covering an entire country and the first featuring ORBX’s TrueEarth technology. As described by the company:

TrueEarth is a game-changing product for Orbx; for the first time we are combining the full suite of features from our FTX Region sceneries, with a completely photoreal terrain base, a feature previously limited to our airports.

Ground-breaking technology has gone into bringing you the most detailed and accurate terrain product ever seen in a flight sim to date; we are very excited at what this product represents.

Many of the components found in TrueEarth Netherlands are a natural evolution from our existing lines; for example, we are leveraging CityScene technology, expert GIS technology found in our latest Regions, advanced night lighting from ORBX Global Base and openLC, proprietary autogen techniques previously seen at Innsbruck, Berlin (GEN) and Munich (GES), and many more.

So, in a nutshell, TrueEarth is a mix of several techniques and technologies that ORBX has been developing and enhancing over the years, to deliver a complete and more realistic experience.

Enough with the technical stuff. We want to know how good it looks in the sim, right?

Above all the technical things behind it, TrueEarth Netherlands offers a huge number of features which is what we, users, actually see. The official list states the following ones:

After seeing this list, we should expect nothing short of an impressive and accurate scenery.

I’ve never been to the Netherlands, so I cannot talk about any specifics, but I have studied quite a bit of aerial photographs (Google Maps, anyone?) of both Rotterdam and Amsterdam before and during my flights around these 2 cities, which acted as my testing grounds. 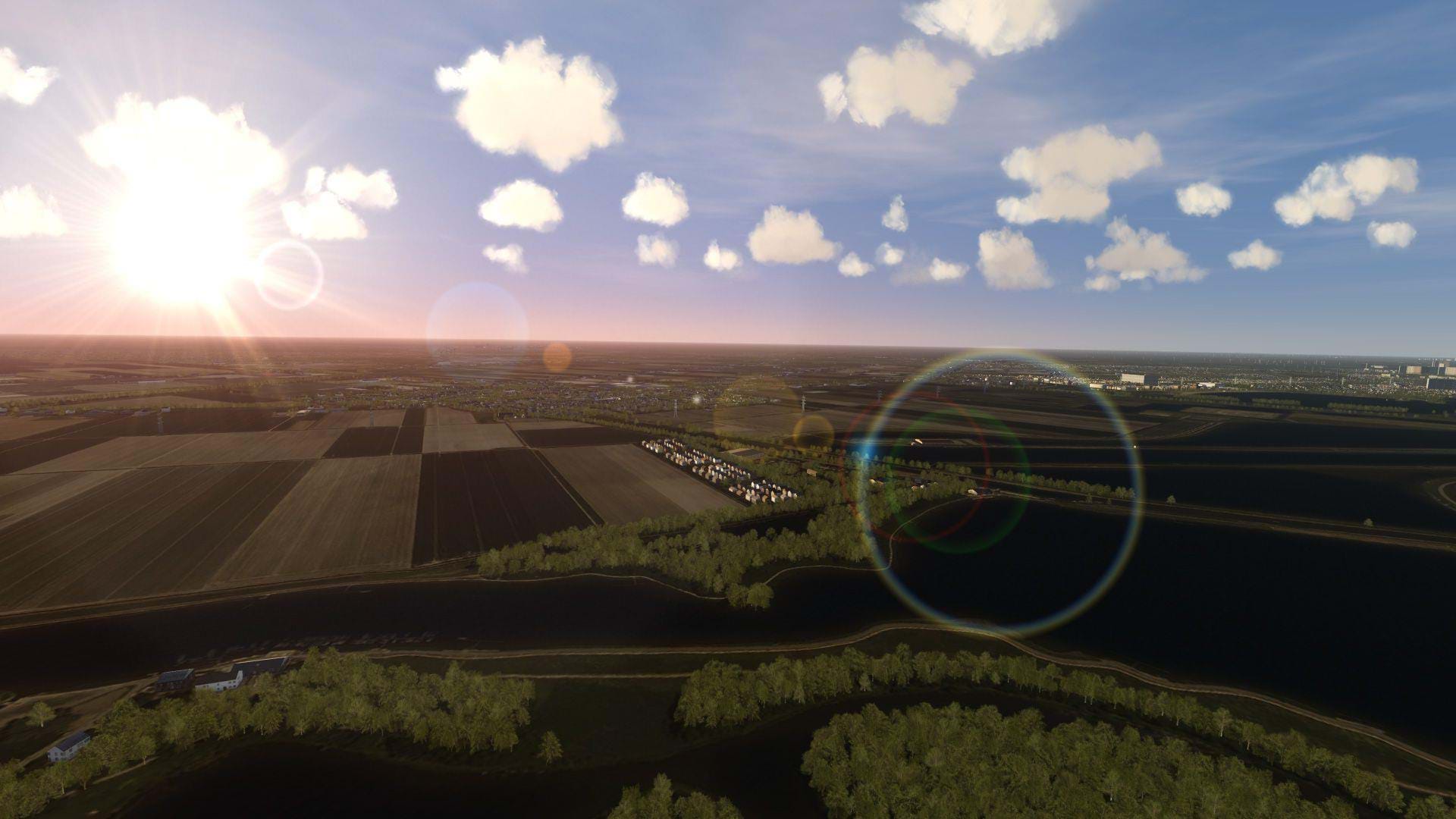 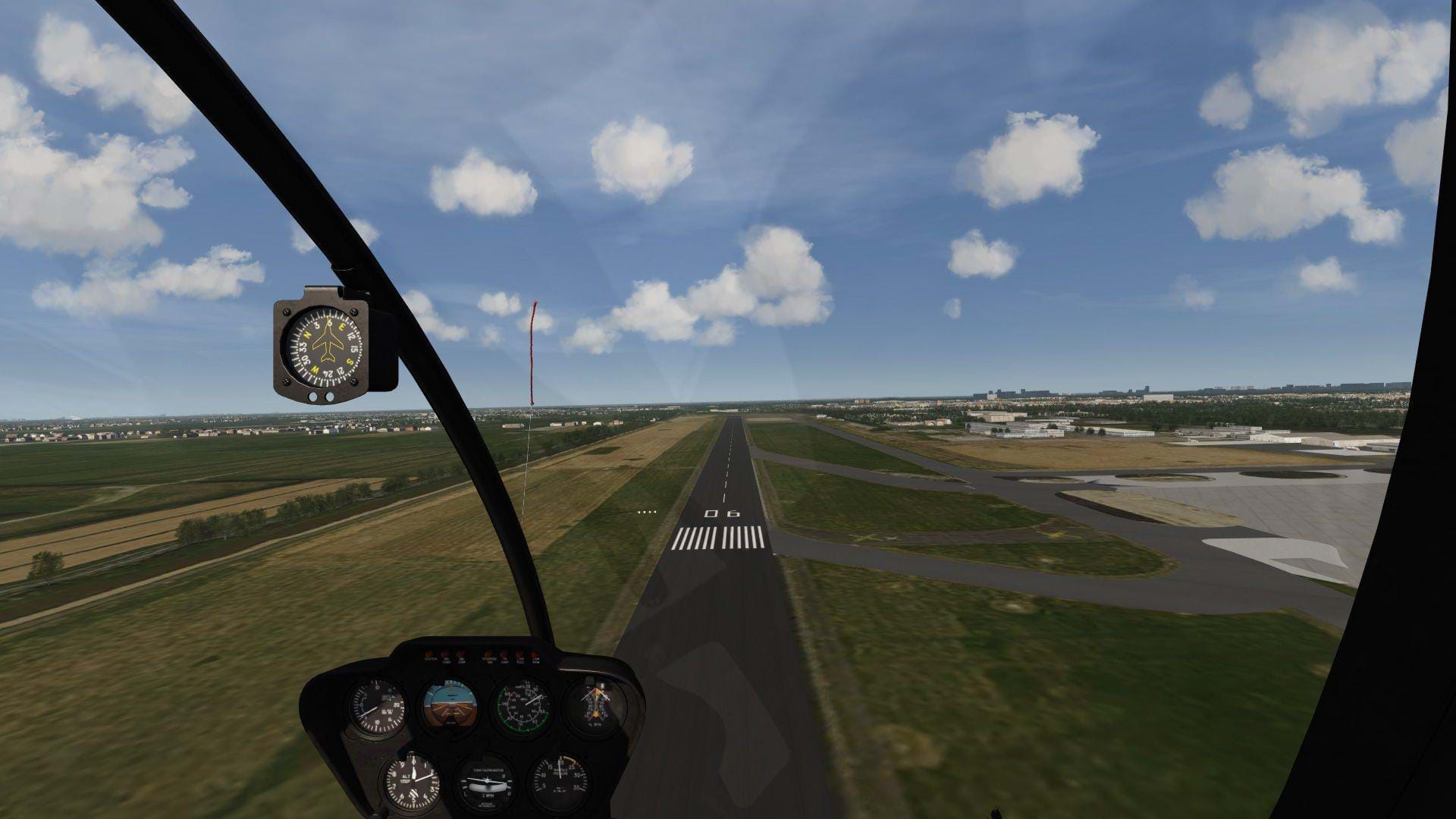 Rotterdam has a special meaning for me. Again, I have never been to the Netherlands but a huge friend of mine lives there, so I’ve found myself flying in Rotterdam quite often in other sims and I have studied the surroundings quite a bit.

Rotterdam Airport kind of feels like a second virtual home to me. I have visited it more often than most of the virtual airports in my own country.

I took off from Rotterdam from a taxiway, instead of going all the way to the runway and, immediately, I noticed what we expect from the country: this thing’s flat. There are no mountains, no hills anywhere nearby. It’s flatland.

It makes me wonder if ORBX has chosen the Netherlands on purpose to test and release their first establishment of a TrueEarth product. Being a flat location, it’s probably easier to use it as testing grounds (no pun intended).

Gaining some altitude, I managed to see some landmarks. At a distance I saw a weird-looking tower-like structure so I decided to fly there. As I approached the building, it seemed weirder and weirder; kinda like a ramp. And, well, it kind of is. I was now flying over SnowWorld, an indoor snow and sports center. 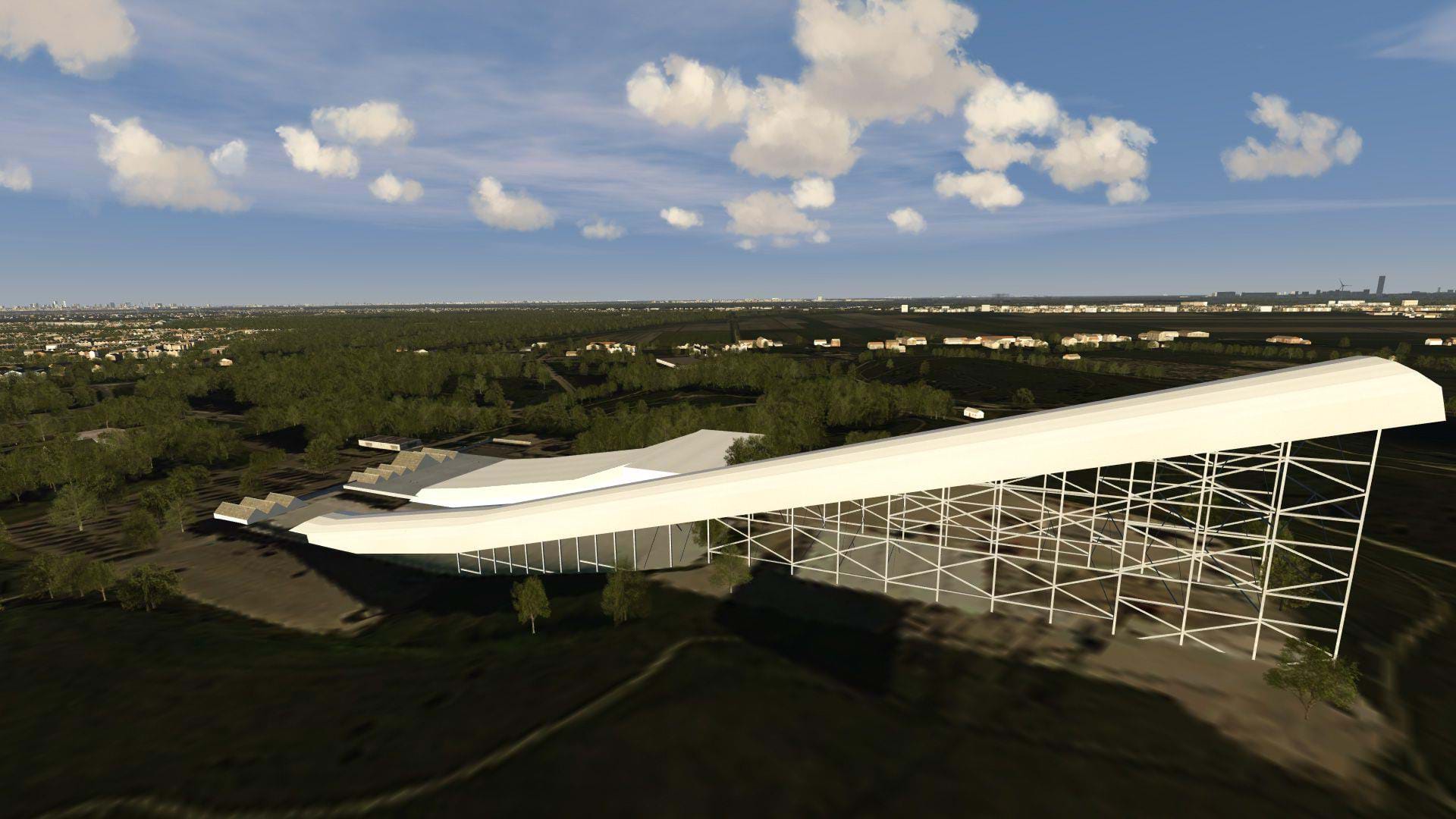 Along the way, I passed over some very fancy electric poles, residential areas and water beds. I must say that the residential areas did feel a bit weird to me as the houses all seemed the same and very, very close to each other.

Taking a look at Google’s street view, I realize houses are, indeed small ones but perhaps a bit more spaced. It’s not a deal-breaker and you might say I’m nitpicking. I probably am!

I flew a few times over SnowWorld and I decided it was now time to check the Rotterdam harbor (or the Port of Rotterdam), one of the biggest in the world.

The small issues – and a curiosity

The harbor is massive spanning some 13,000 acres and over 35,000 sea ships pass through it. As with the rest of the scenery, ORBX added a huge amount of details.

But it was here that I noticed a few issues – and a curiosity.

One of the things I noticed while flying the region were the wind turbines (I don’t know why but I love seeing those both in the sim and real life). I was very curious to check out Maasvlakte which is a man-made extension of the port and has quite a few turbines around it. 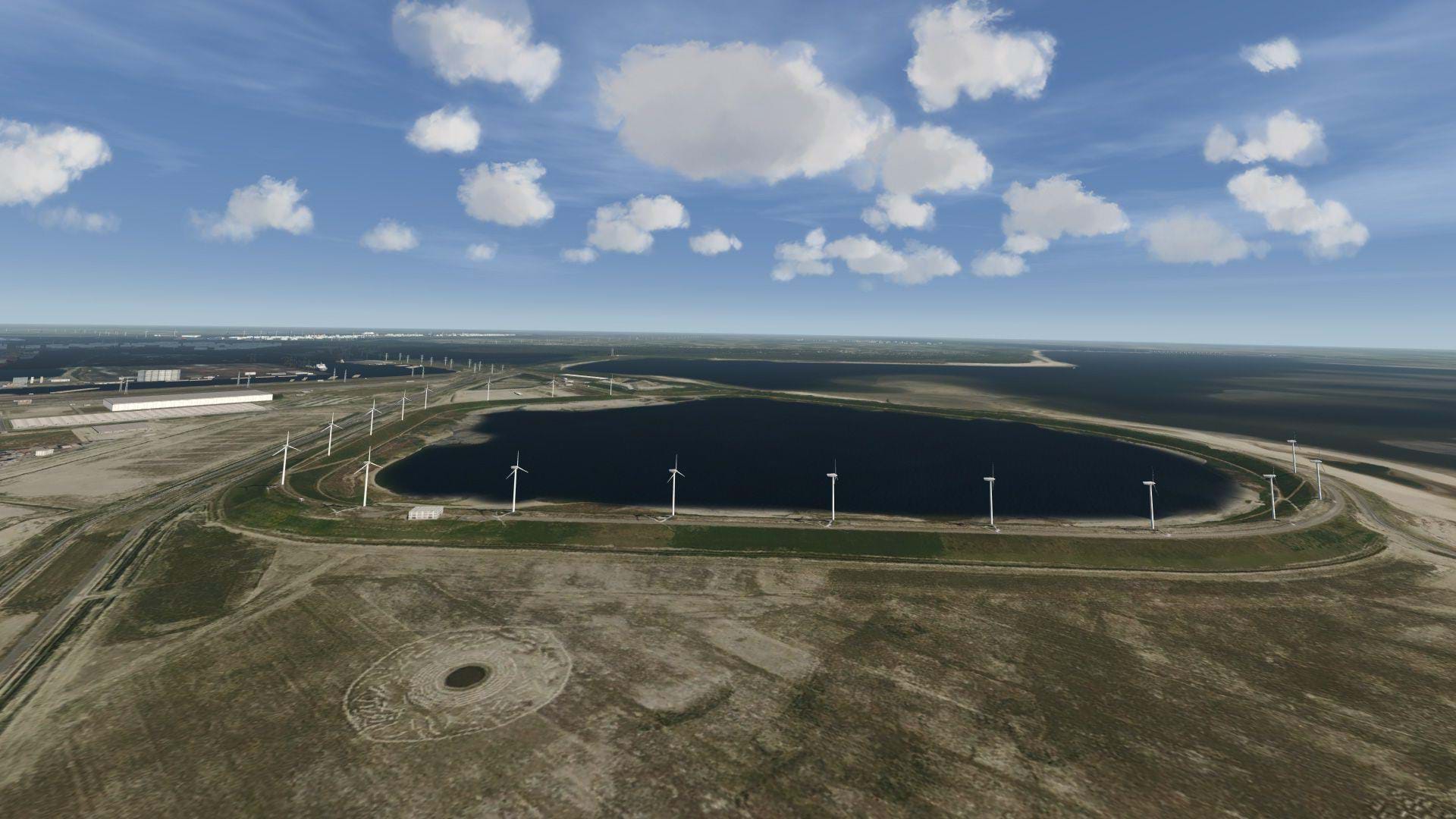 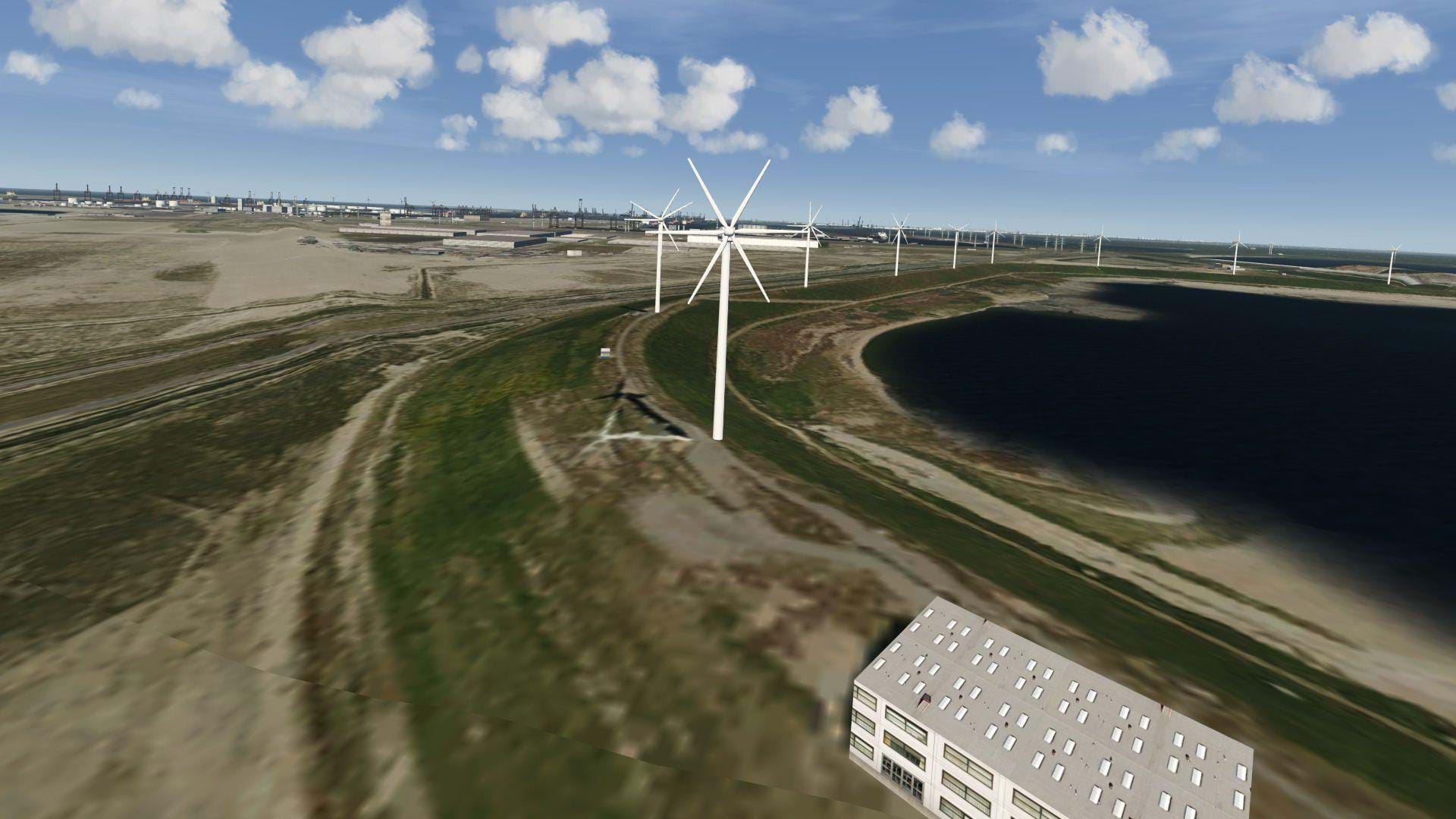 The other issue I found have to do with either a model or texture issue in the cranes. While approaching them I felt like I was looking at an M.C. Escher drawing. Something was just not right. I approached them and realized there are really a few glitches. 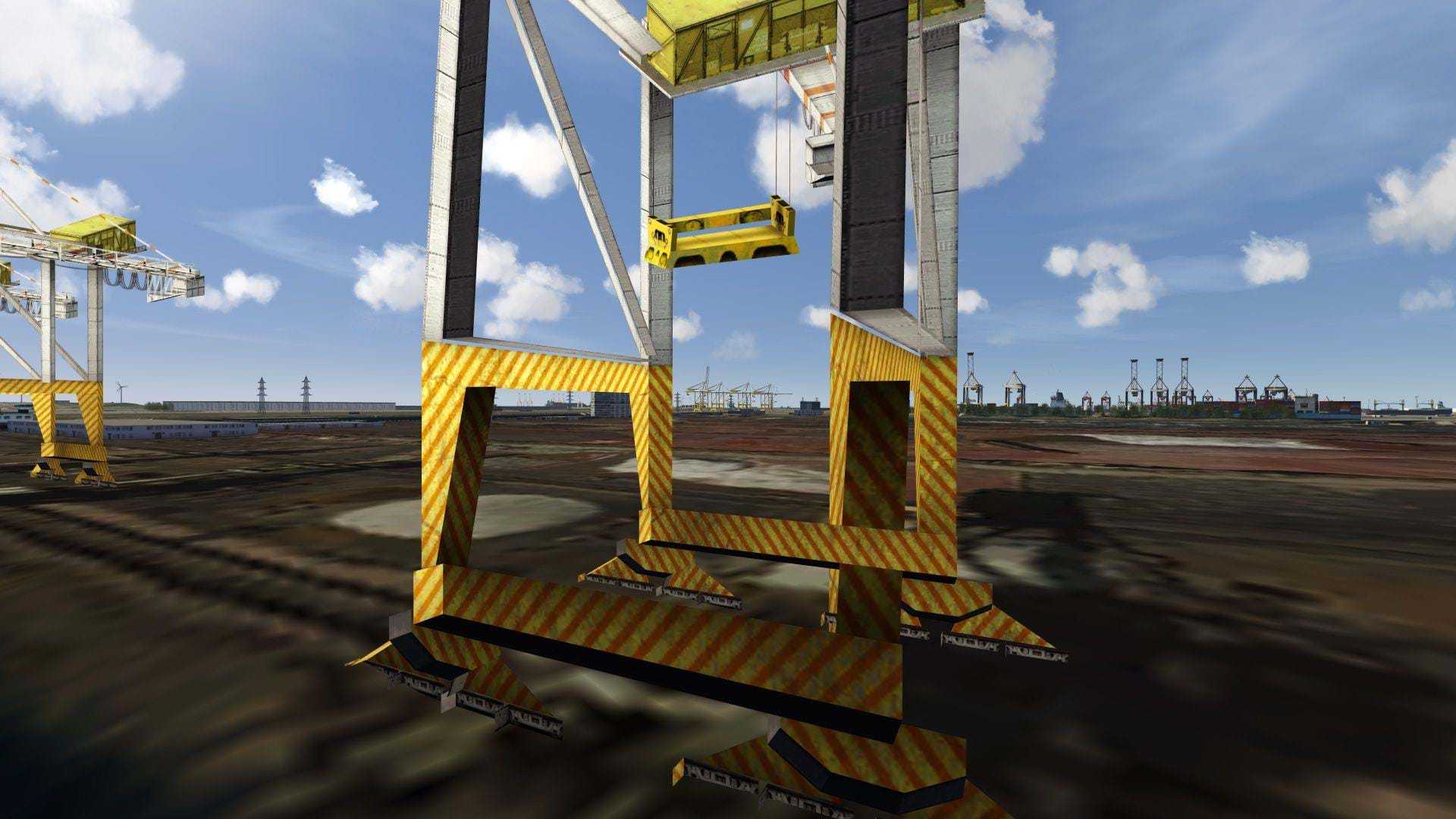 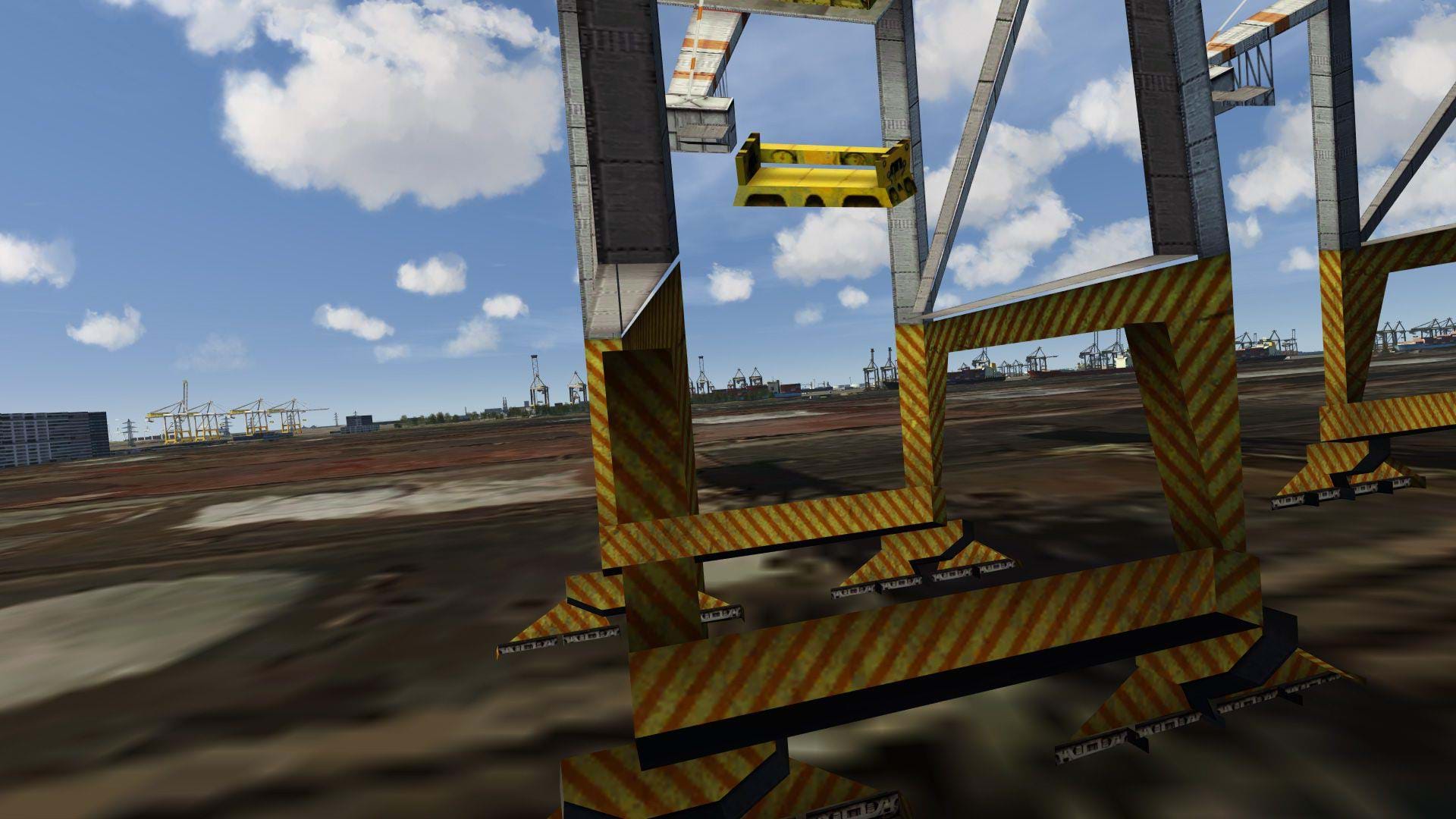 The curiosity has to do with some seagulls I found flying over a ship. Well, not really flying. They are there but static. They don’t move around or anything like that. I didn’t understand if it was some issue with AFS2 (perhaps some testing) or if ORBX decided to add the seagulls, even if static, to make the scenery look a bit more alive. Yes, it’s weird to see the birds standing still but, at the same time, it’s kind of cool to realize that ORBX added the small details. 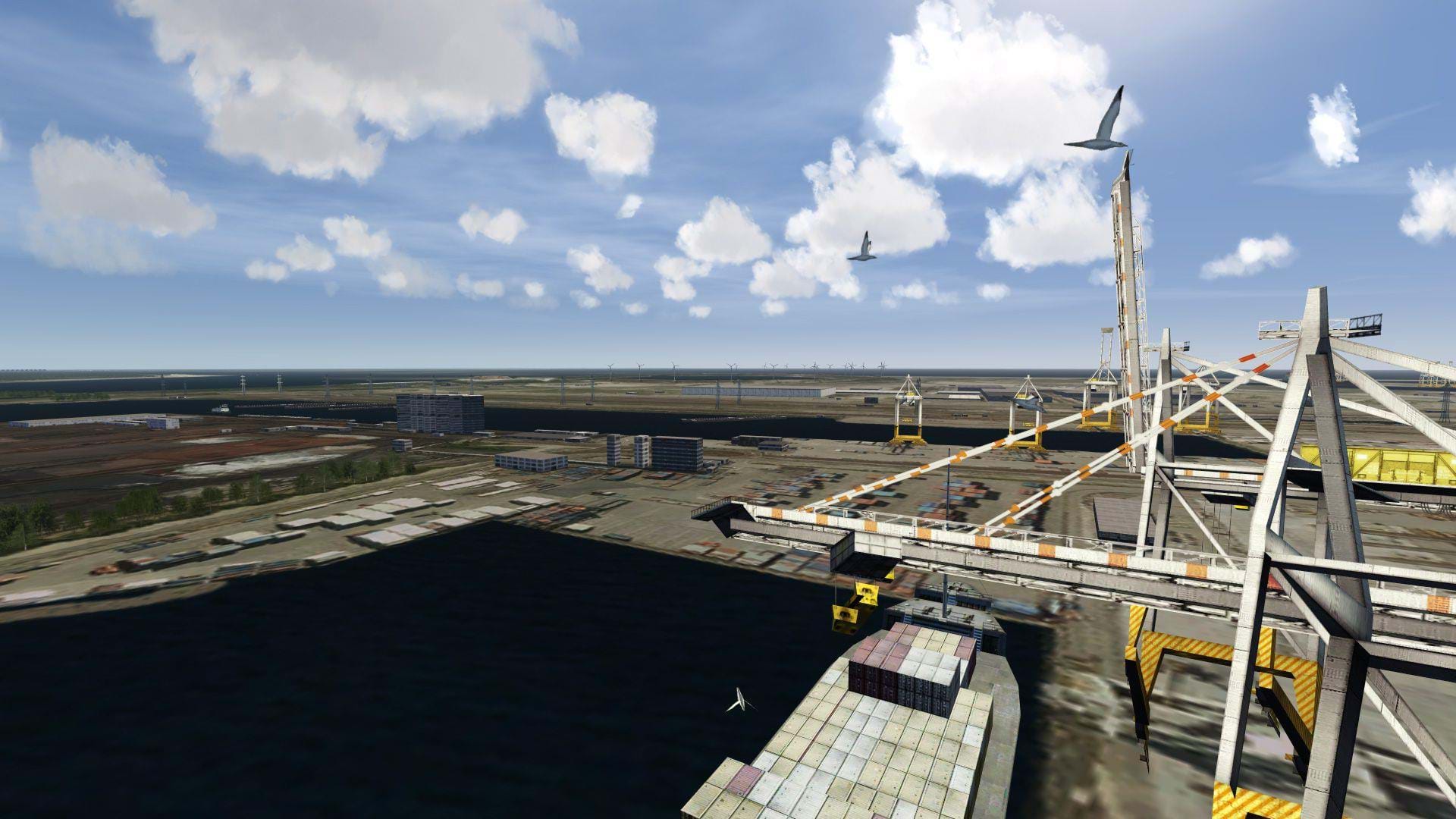 Some of this stuff would probably not be noticed by most users (the airline/passenger simmers). We, the helicopter folks, are a real pain and we fly all over the place, so we’re more subject to finding this kind of issues.

None of this is much a big deal, especially on such a big project – again, folks, we’re talking about covering a whole country. Things can get overlooked and it’s not easy to keep track of. I hope ORBX addresses these little things in the future. Although not a deal-breaker, it lets a sour taste considering it comes from a company like ORBX.

This is a huge area. No doubt about it. Covering such an area with high-resolution textures would probably force you to download hundreds of Gigabytes of imagery. ORBX may have had to compromise here. Textures are nice and varied but they are not as crisp as some of us might wish for. 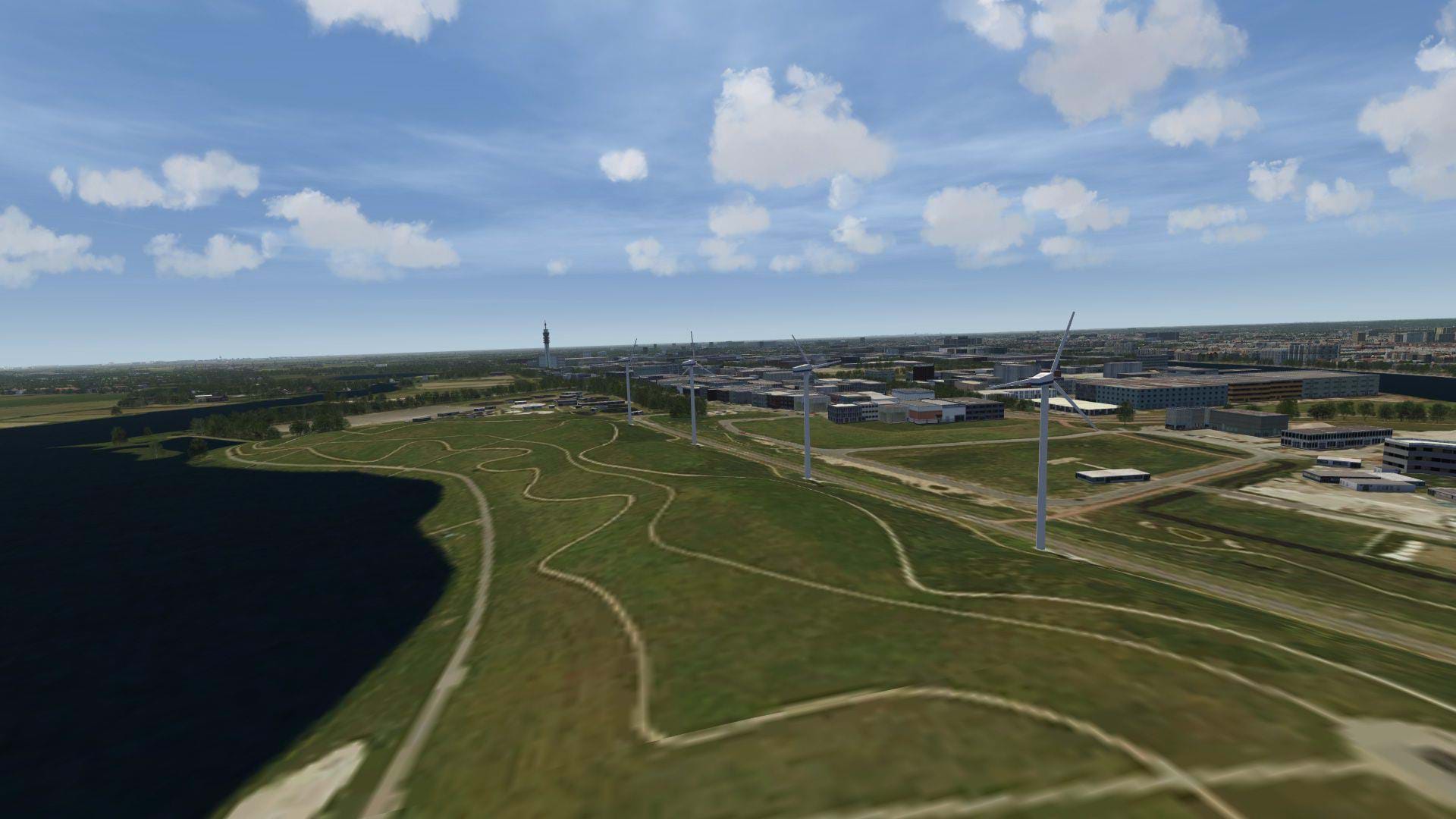 It’s not like we are given a pixel-fest or anything and, for most of the region (and at higher altitude), they do work fine. But, at a lower altitude and in areas where we require more detail, such as roads and railroads, you will notice some lack of detail.

Compromises are just that: compromises. ORBX probably have to do a big one here.

One of the cool things about IPACS’ AFS2 is the fact that you can land pretty much everywhere (OK even on water but that’s something we hope to see changed in the future). AFS2 let’s you land on buildings, ships, elevated roads and this scenery is no exception.

I didn’t try a single building or ship that I couldn’t land on. 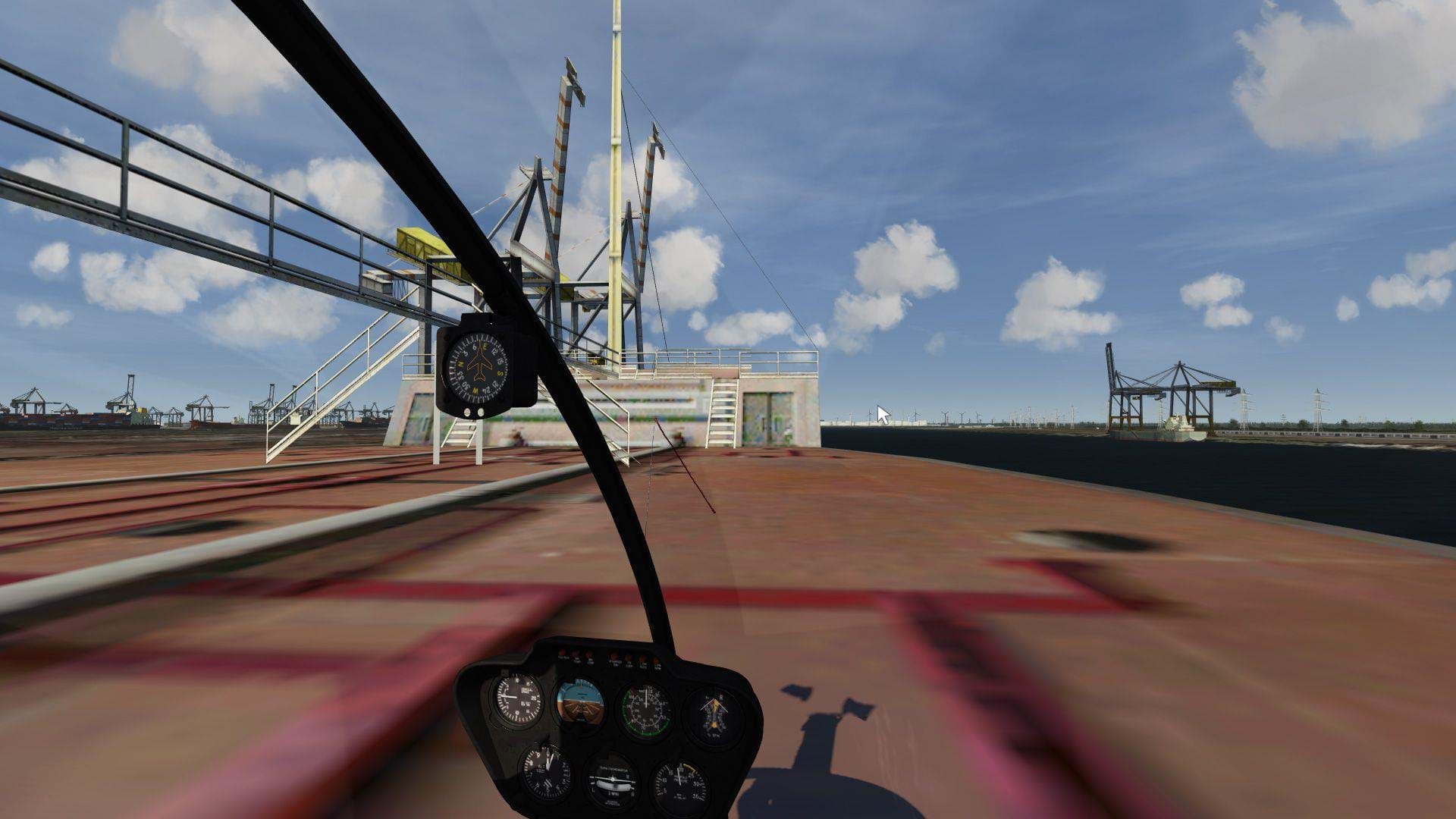 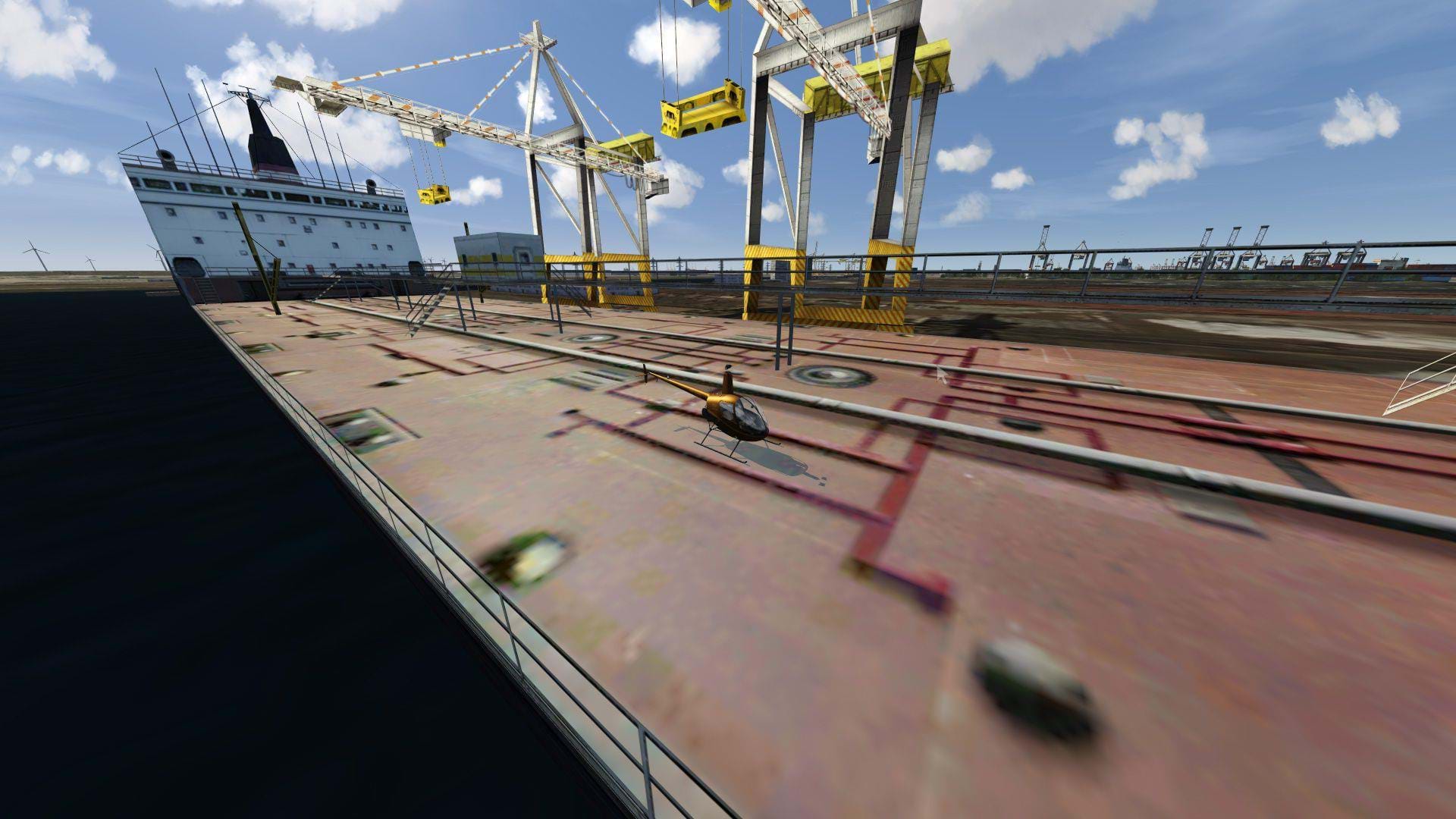 One of the things that I usually don’t get worried with when trying scenery in AFS2 is frame rate. Especially with Vulkan, which IPACS is shipping in a beta version with the sim, and even when using VR, AFS2 is very smooth.

It’s really hard not to like something developed by ORBX and this scenery is no exception. I like everything about it and I am very excited to see what the company will come up with next in regard to their TrueEarth technology. Are they doing more entire countries in the future? I hope so.

None of the issues I pointed out are deal-breakers, like I said. Yes, some are annoying and yes: I didn’t not expect to find them in an ORBX product. But we must not forget that this is not only a different, gigantic, endeavor (a full country) and AFS2 is also relatively new ground for scenery developers and ORBX in particular.

ORBX has some minor issues to solve on this scenery (which I’m sure they will eventually address) but I highly recommend it to anyone wanting to fly in this region of the world. With the possibility to purchase the Helgoland scenery as well, this can make for a very nice area to have some fun at. Especially for GA/helicopters and anyone willing to spend some time in VFR. 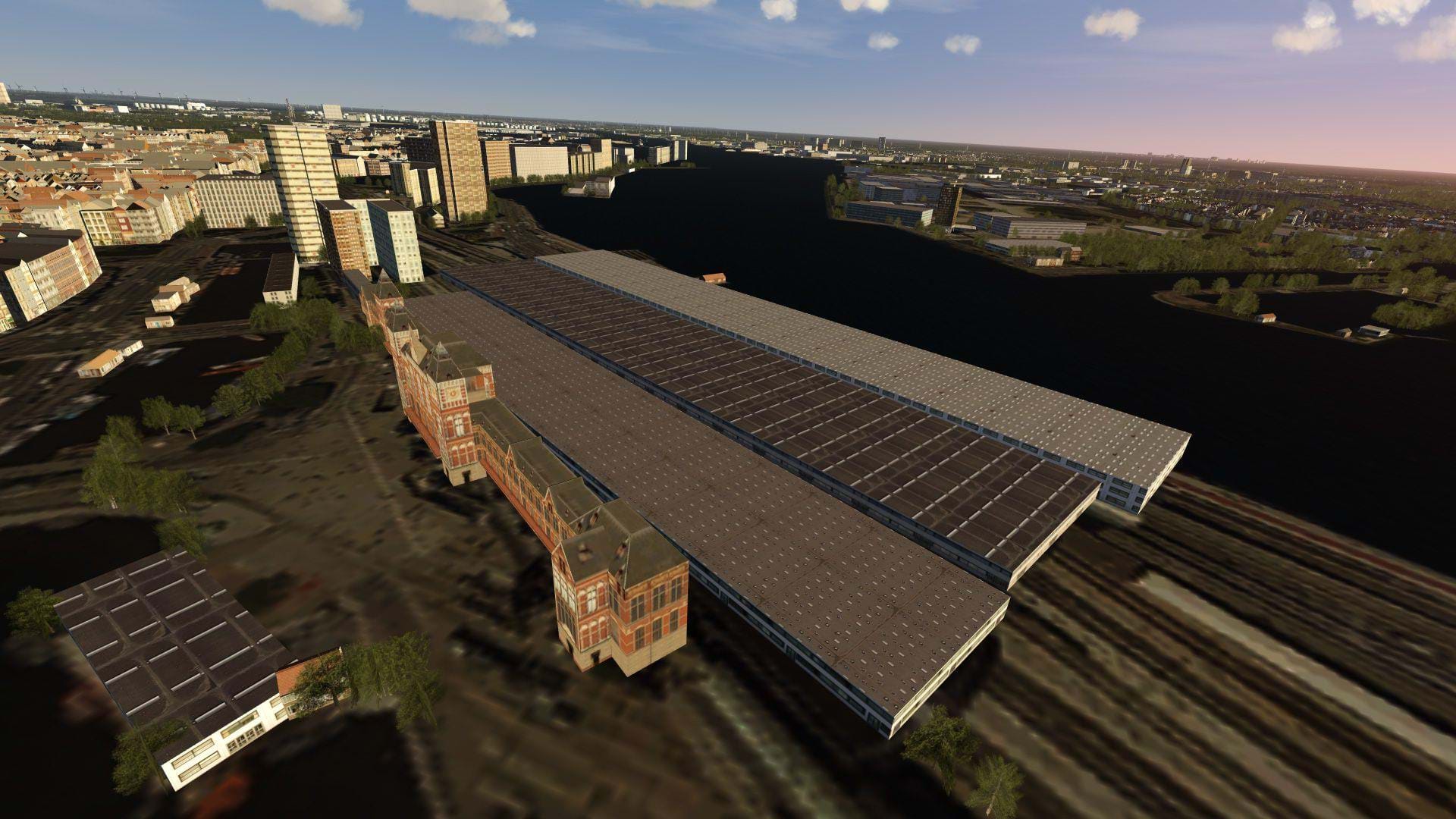 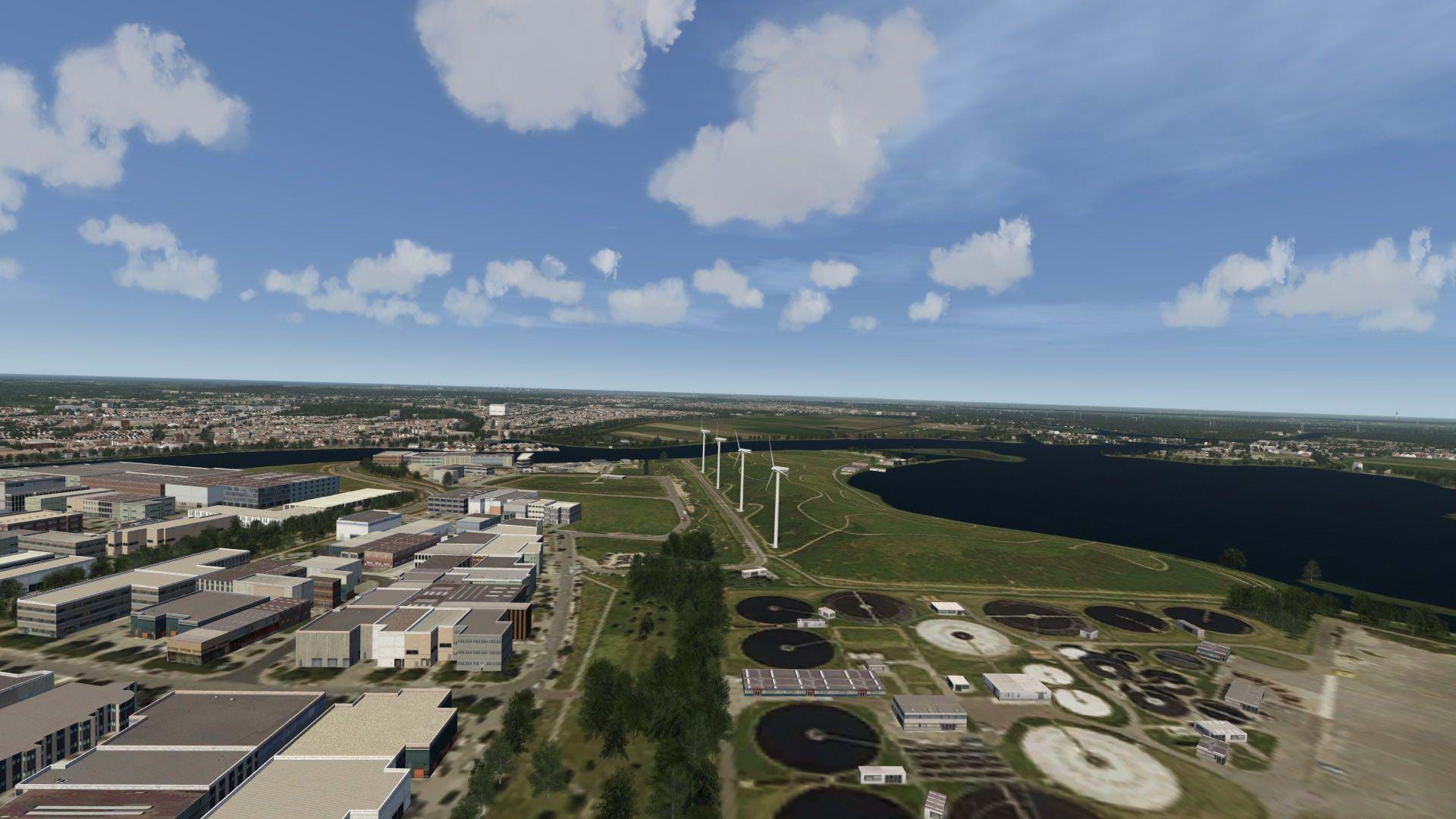 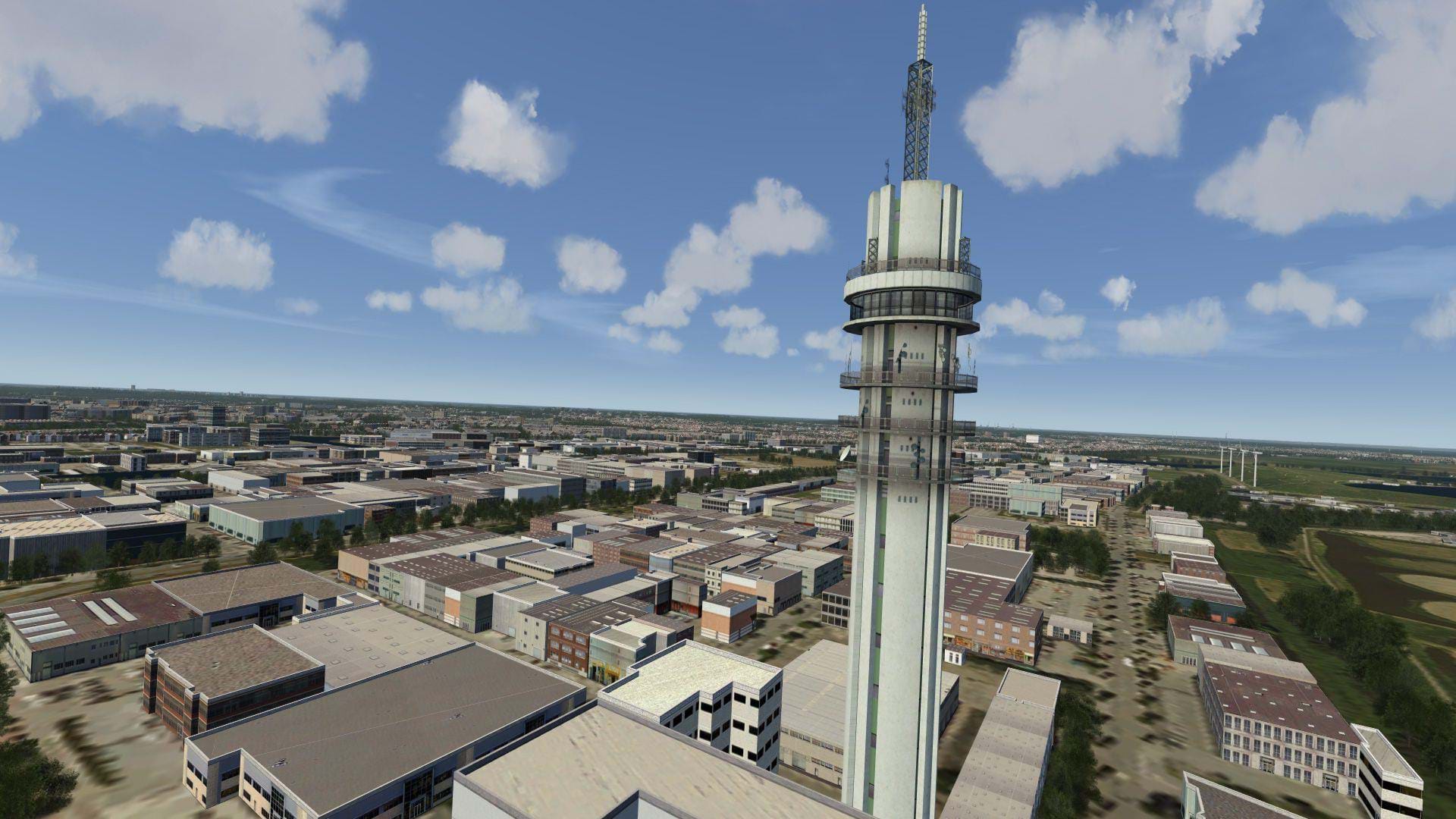 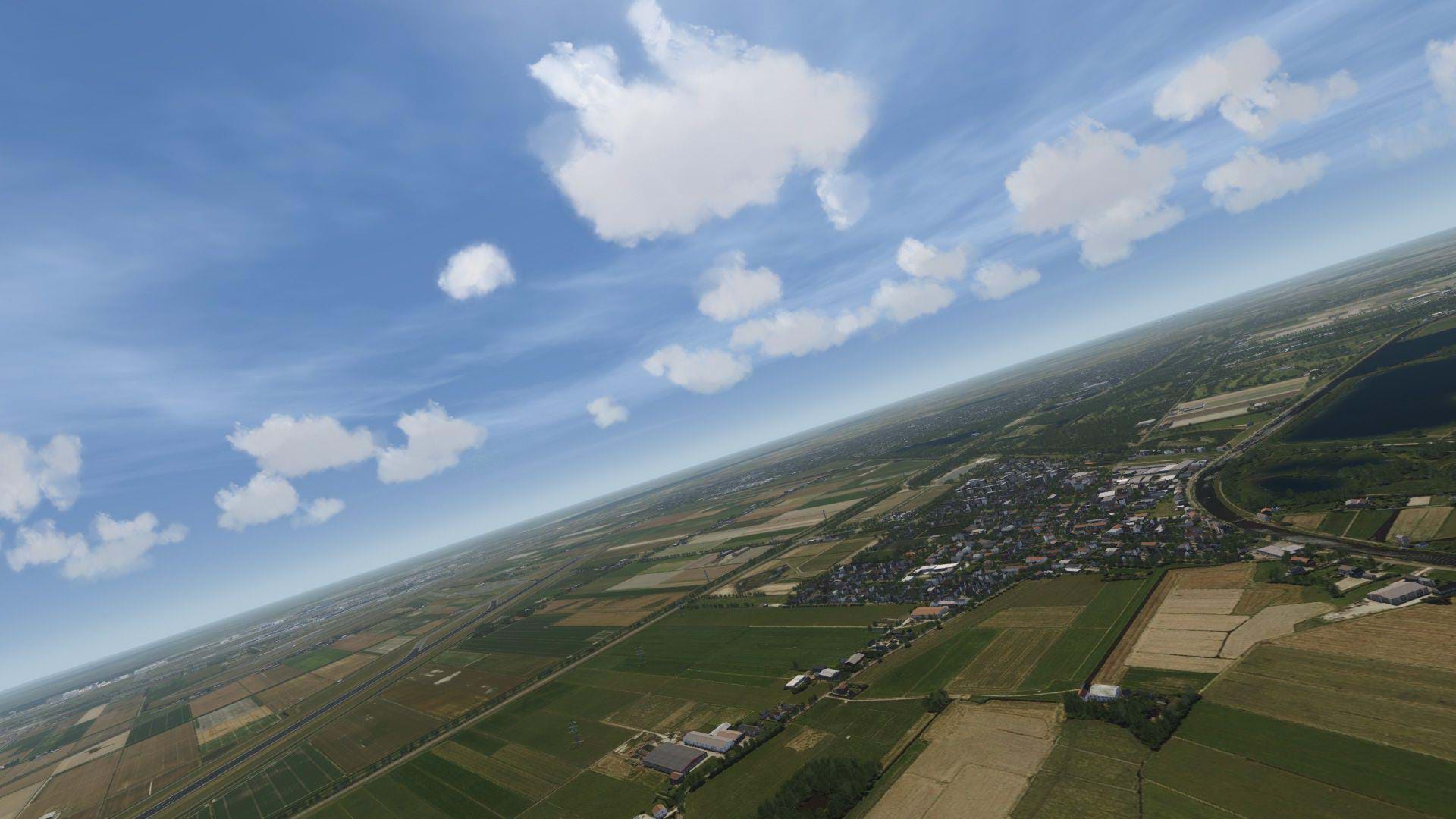 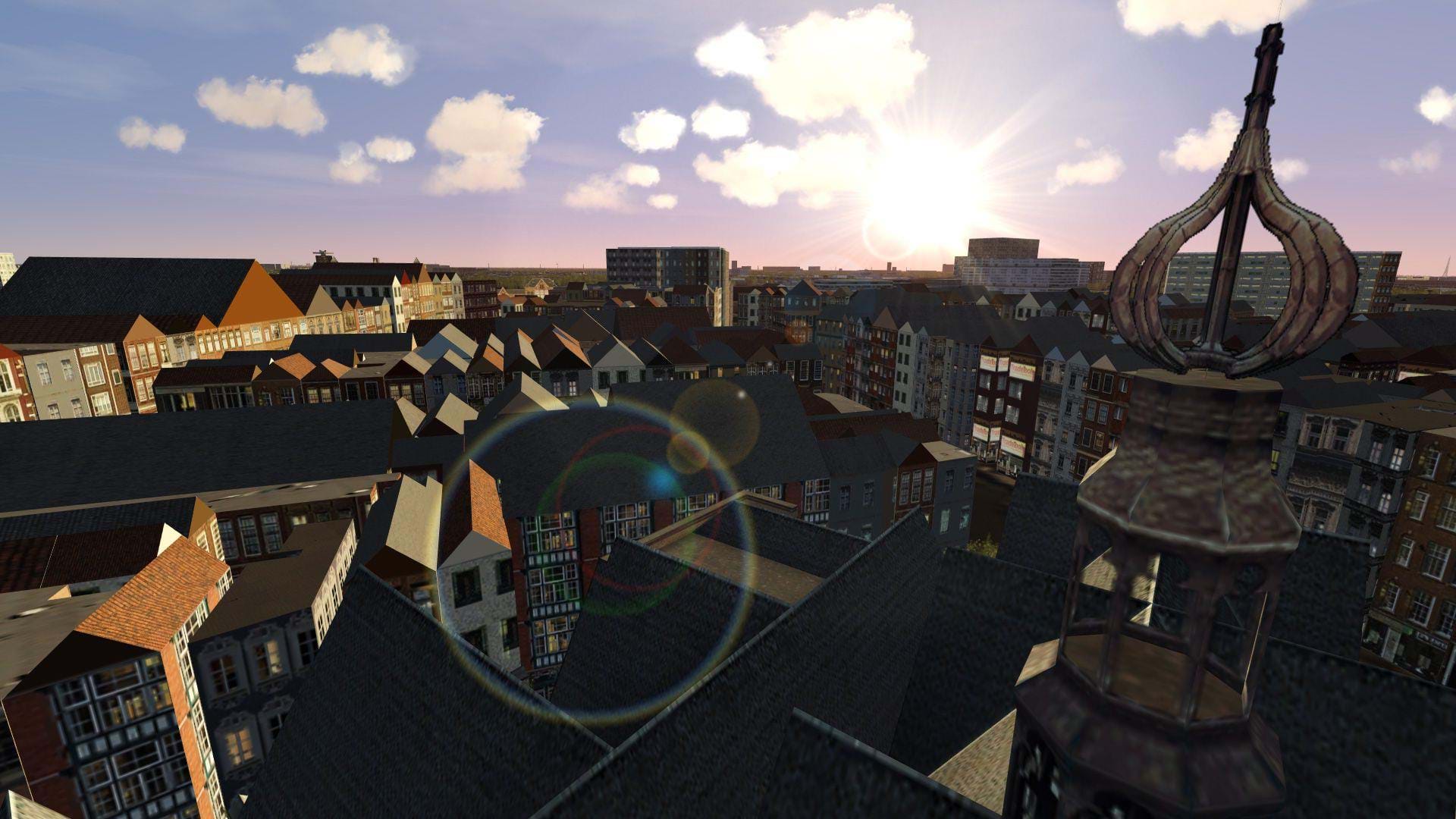 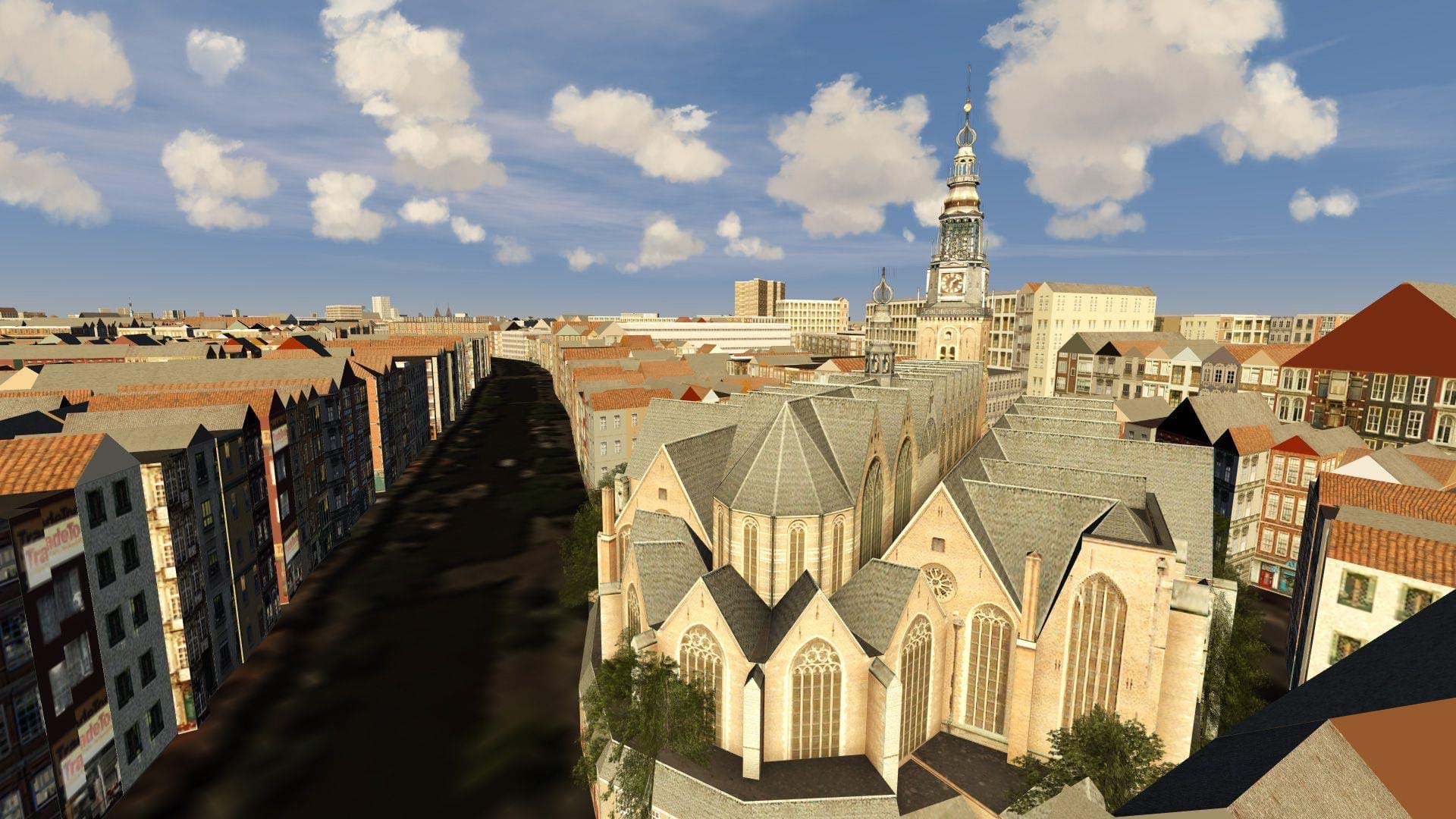 ORBX seems to be very serious about investing in AFS2 which is, of course, amazing for the sim. Although I'd like to see some freeware developers entering the market as well, the fact that a company like this one is supporting IPACS and this sim is a major win for the community. TrueEarth Netherlands is an impressive product (despite some minor issues). If you are an AFS2 user and you are interested in this region of the planet, you should get it.

Installation 10
Model 8
Textures 8
Buildings 8
Visual impact and quality 9
Frame rate impact 10
Total score
9
* The above final rating is calculated from a weighted average and not the direct arithmetic average. This means that some elements of the review will have a higher influence in the final score than others.
Click here to purchase/download or more information