A few months ago, the MP Design Studio Gazelle for P3D and FSX saw the light of day. MP Design Studio has now released an update, with newer models, textures and some new features. Joe took her for a spin. Still no Blue Thunder, though. 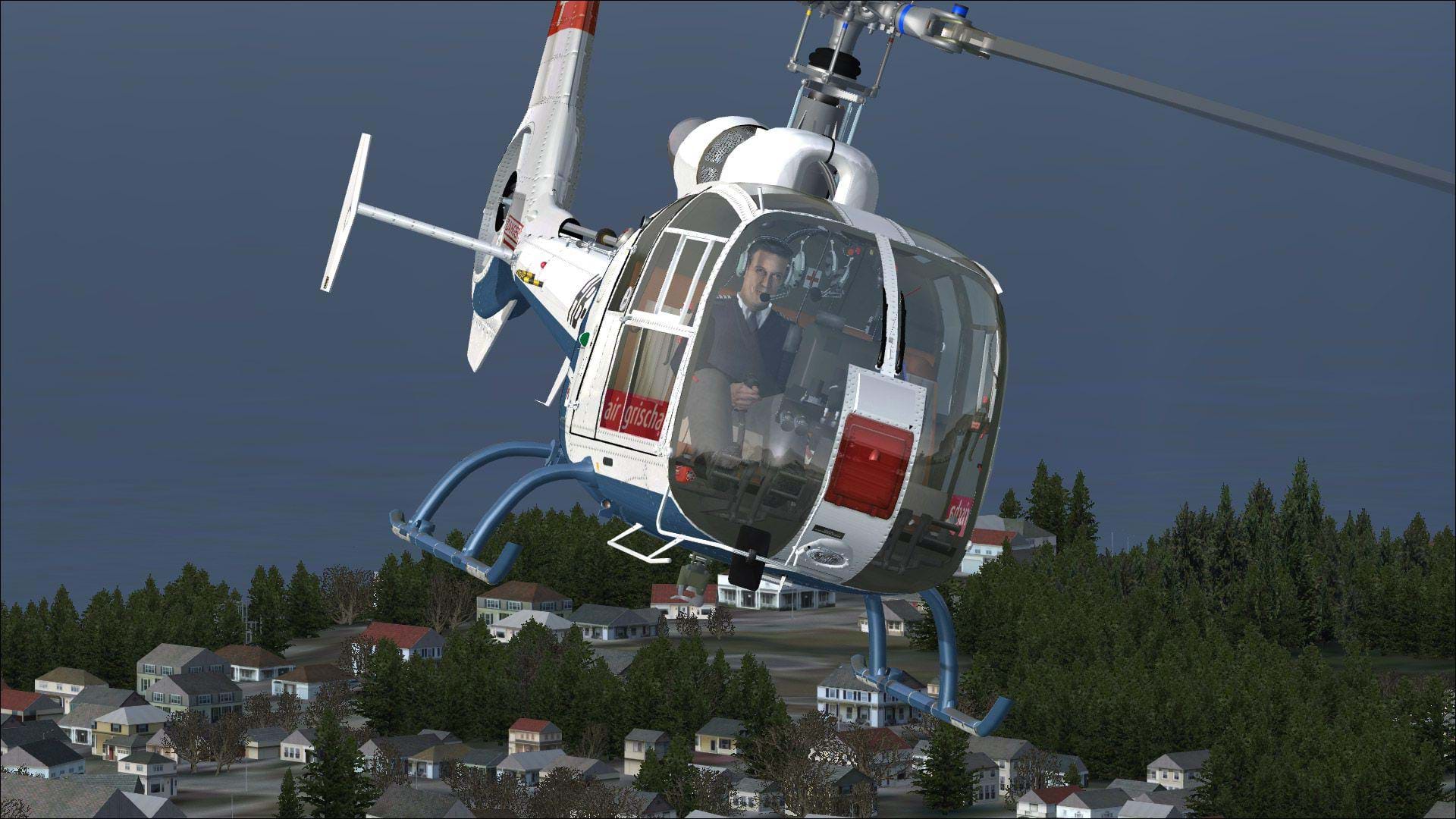 As far as helicopters go in the flight simulator community, 2016 has been the year of the SA342. The DCS model that was released this year has enjoyed constant updates and refinement. There was a Flight Gear release of a Gazelle, and MP Design studio is back with an update to their last release of the SA342 Gazelle for FSX and P3D.

The first version of this model was reviewed by HeliSimmer back in June; you can check that out here.

This review will be an update to the last one, covering the new features of MP designs SA342.

The new update focuses on the civilian variant of the SA342, and features 3 new paint schemes. 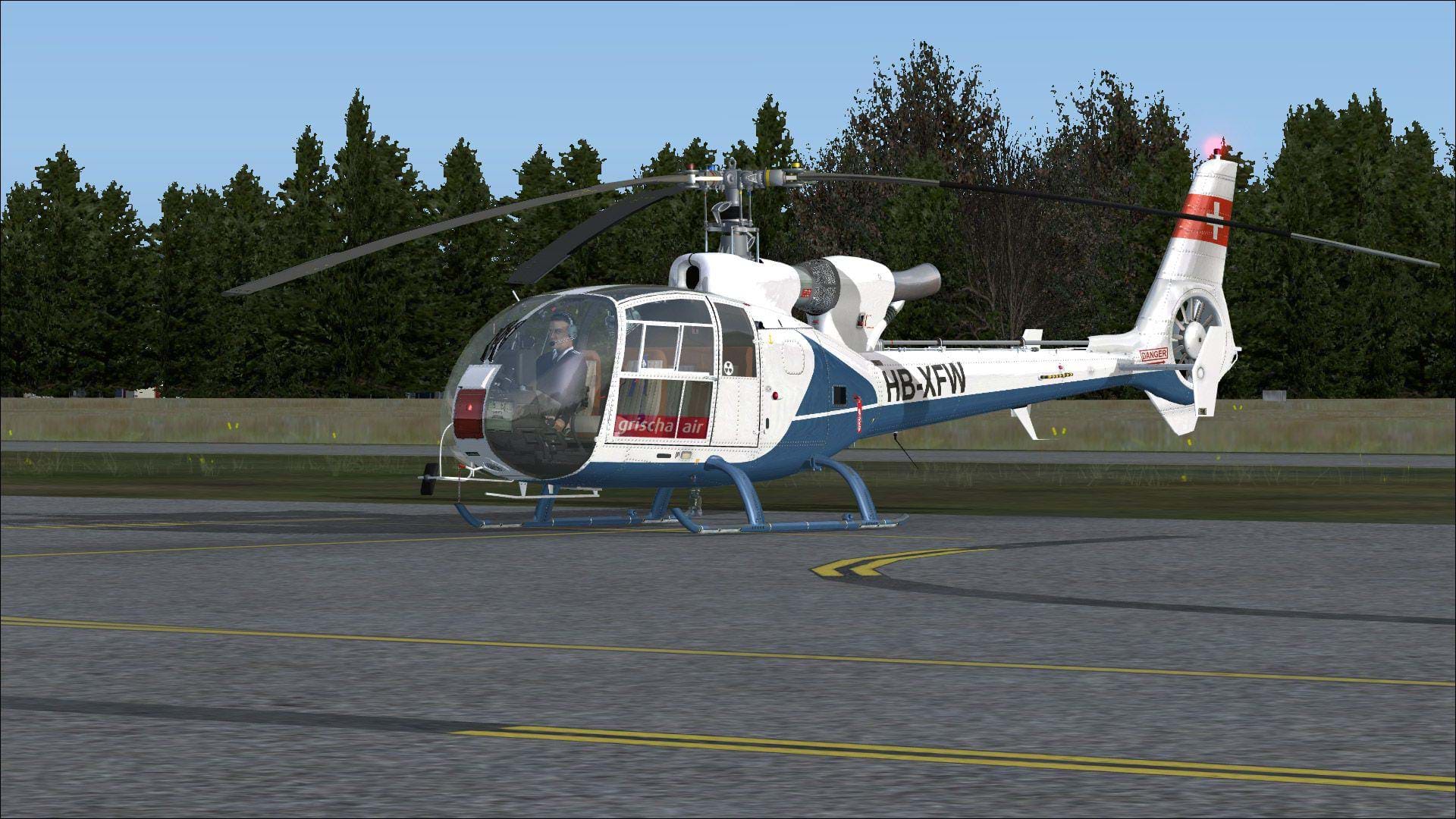 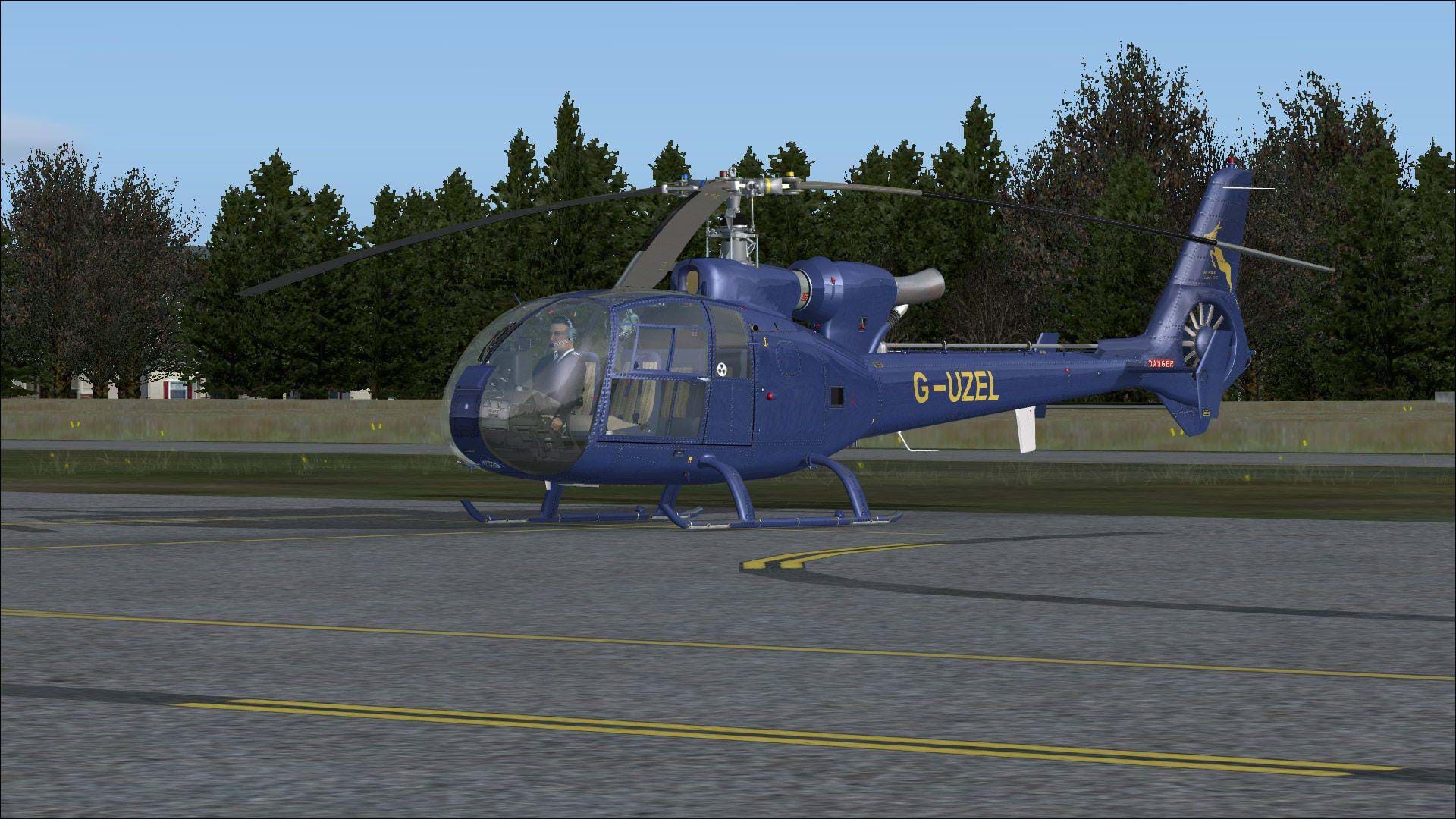 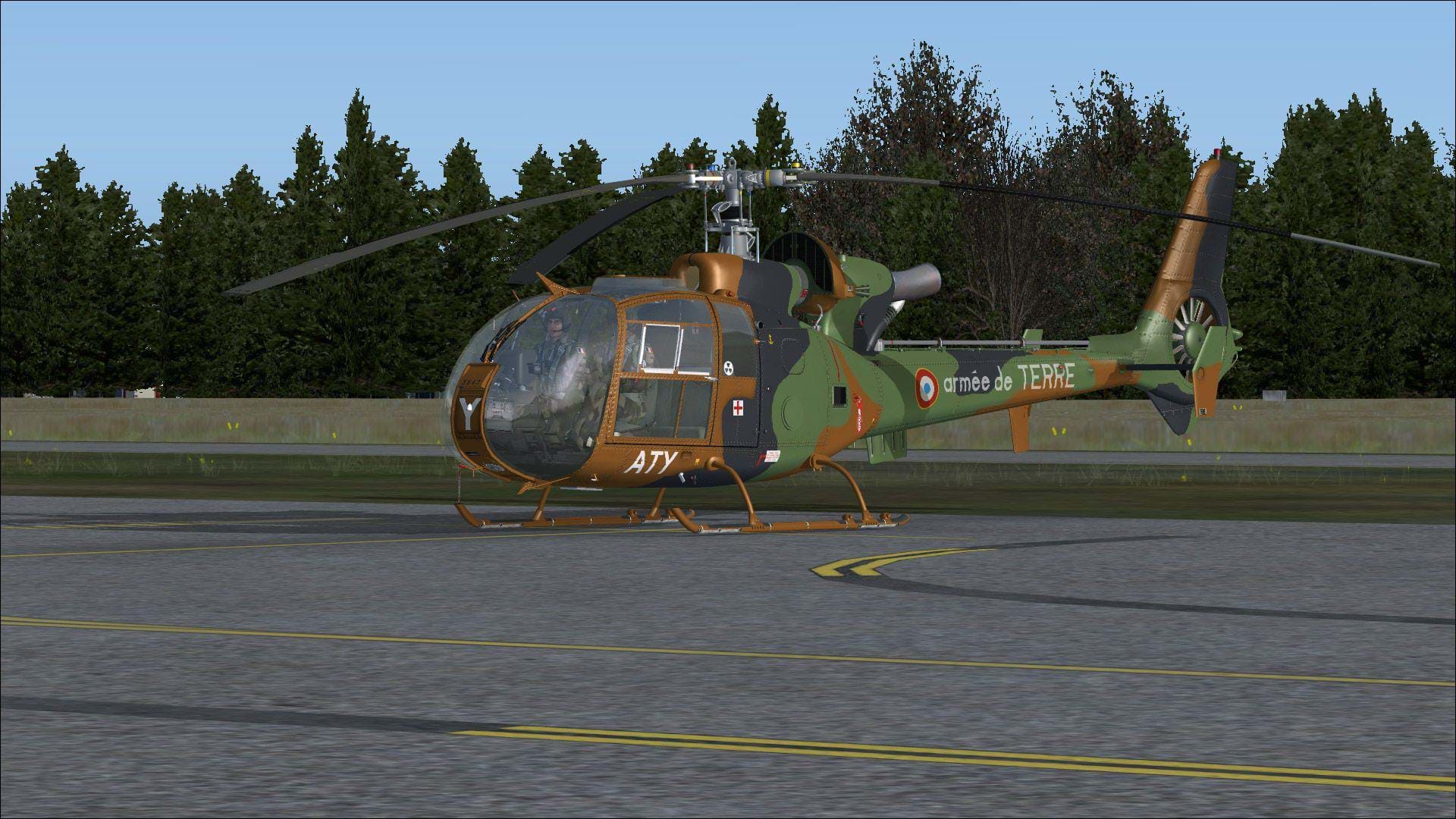 The textures of this model and its new paint schemes look as if they’ve been refined, and improved over this models initial release. The civilian textures both have very glossy reflective textures that look nice. 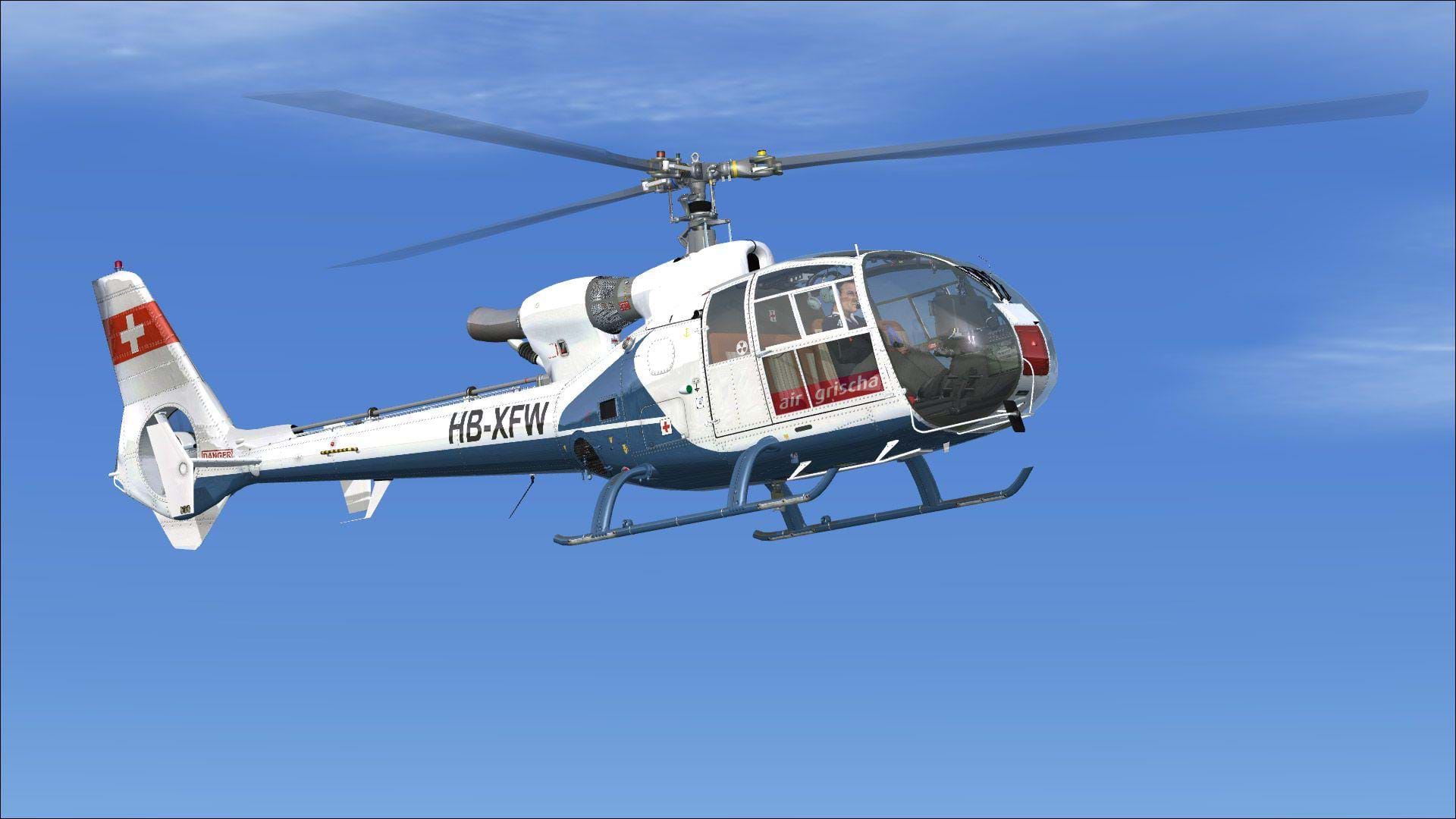 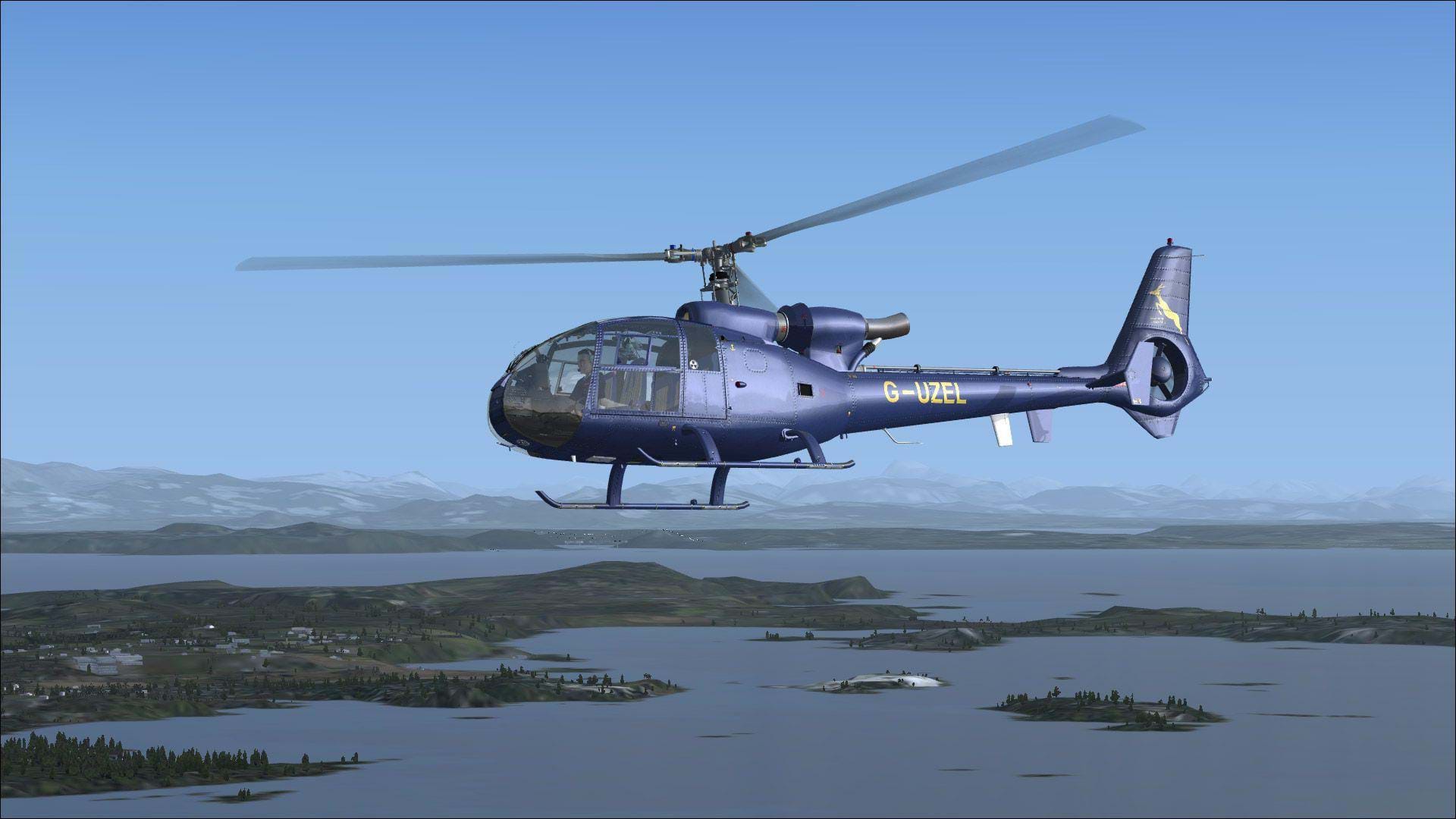 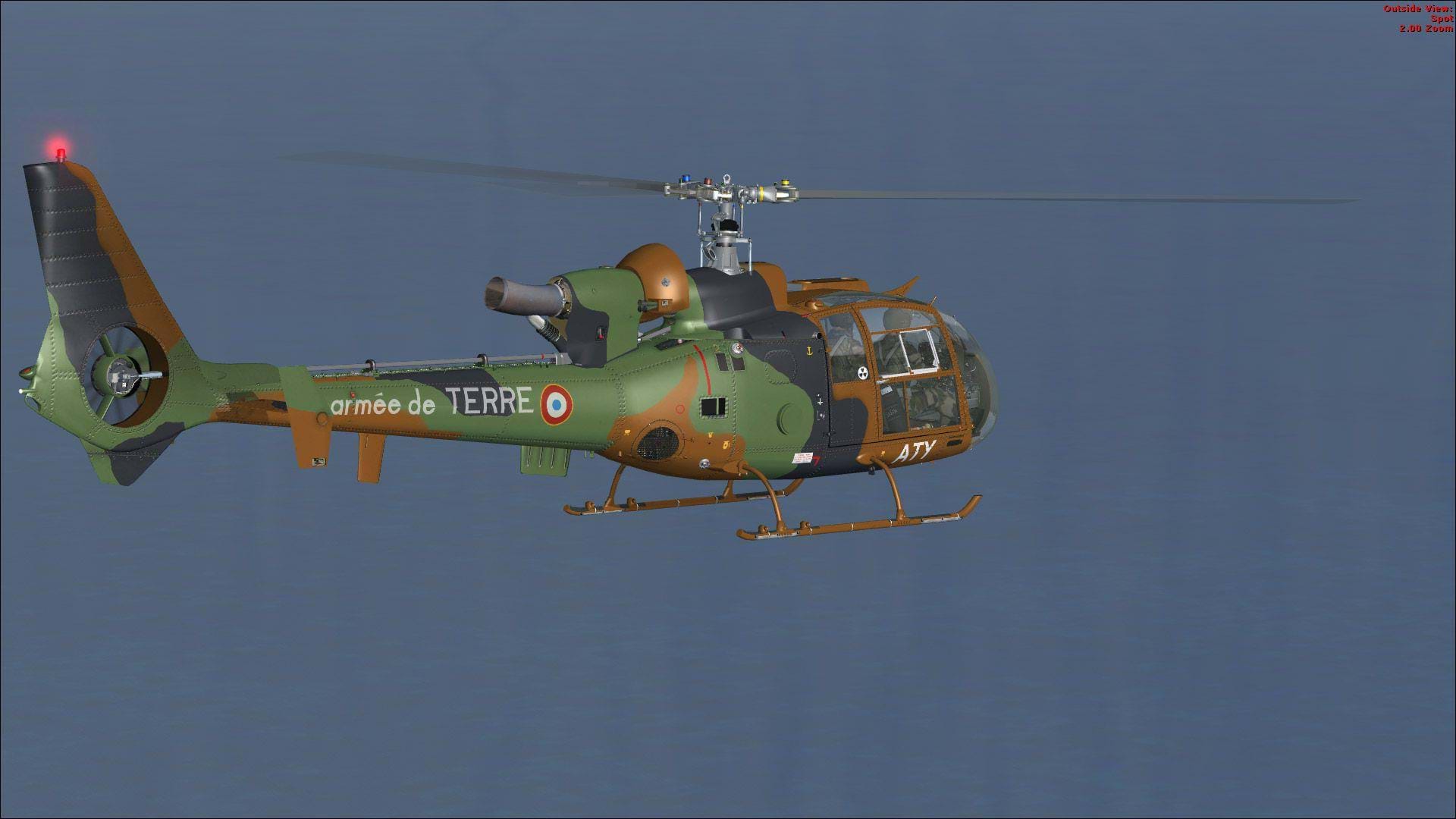 The Cockpit textures and modeling have received a complete overhaul, making this new release look similar to the Cockpit of the DCS model.

For comparison, here’s a shot of the cockpit of the 1st release of this model. 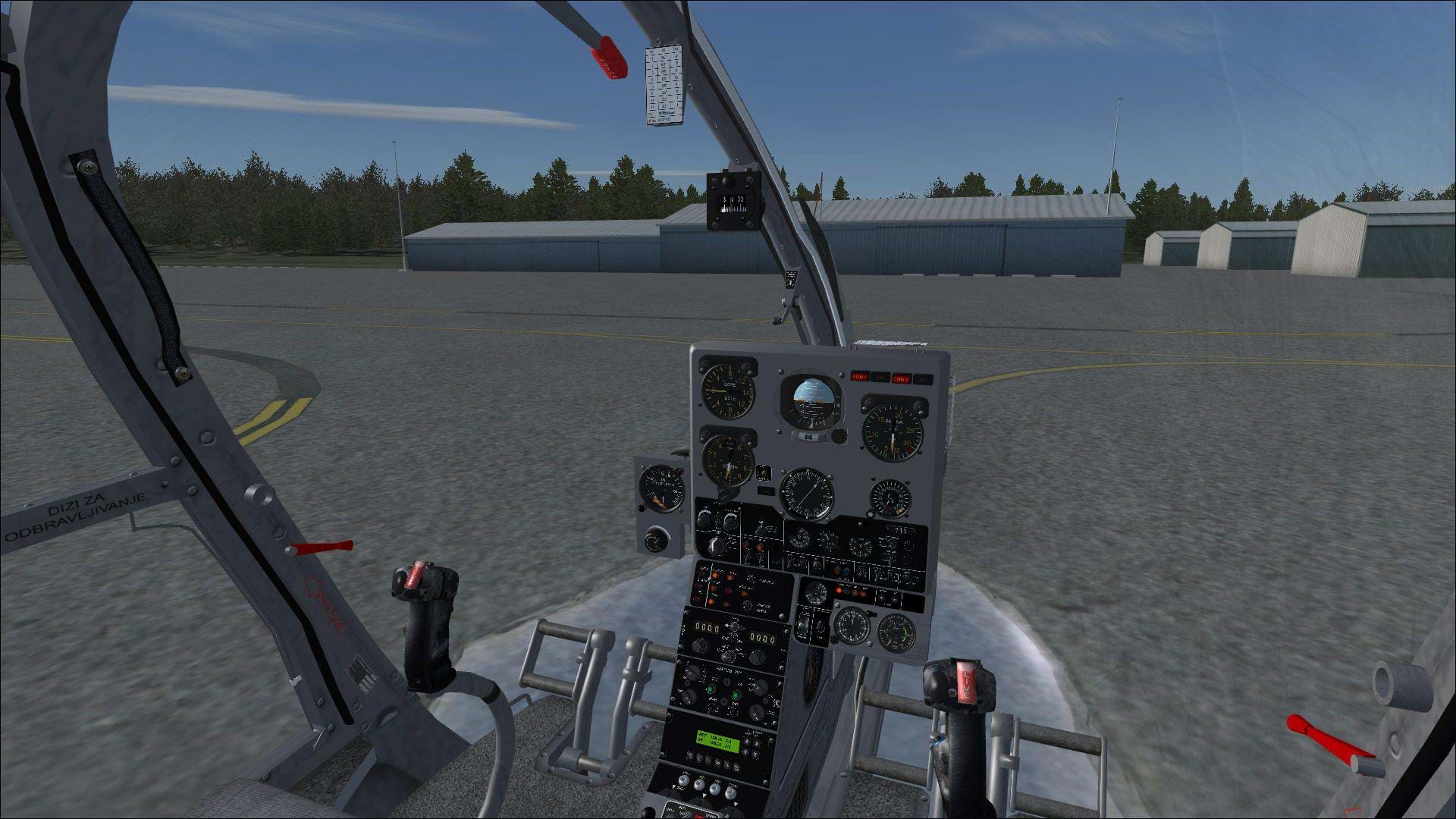 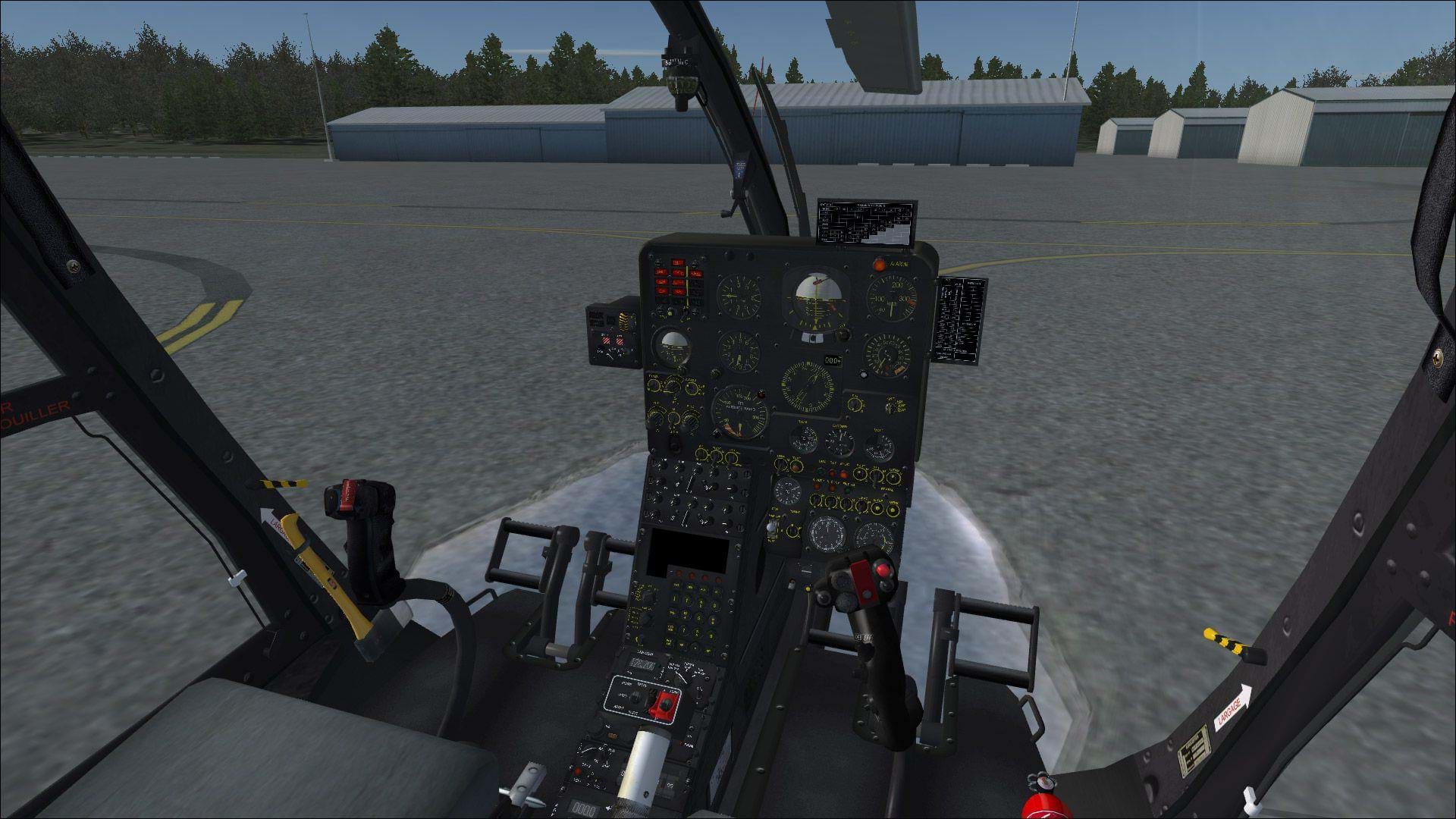 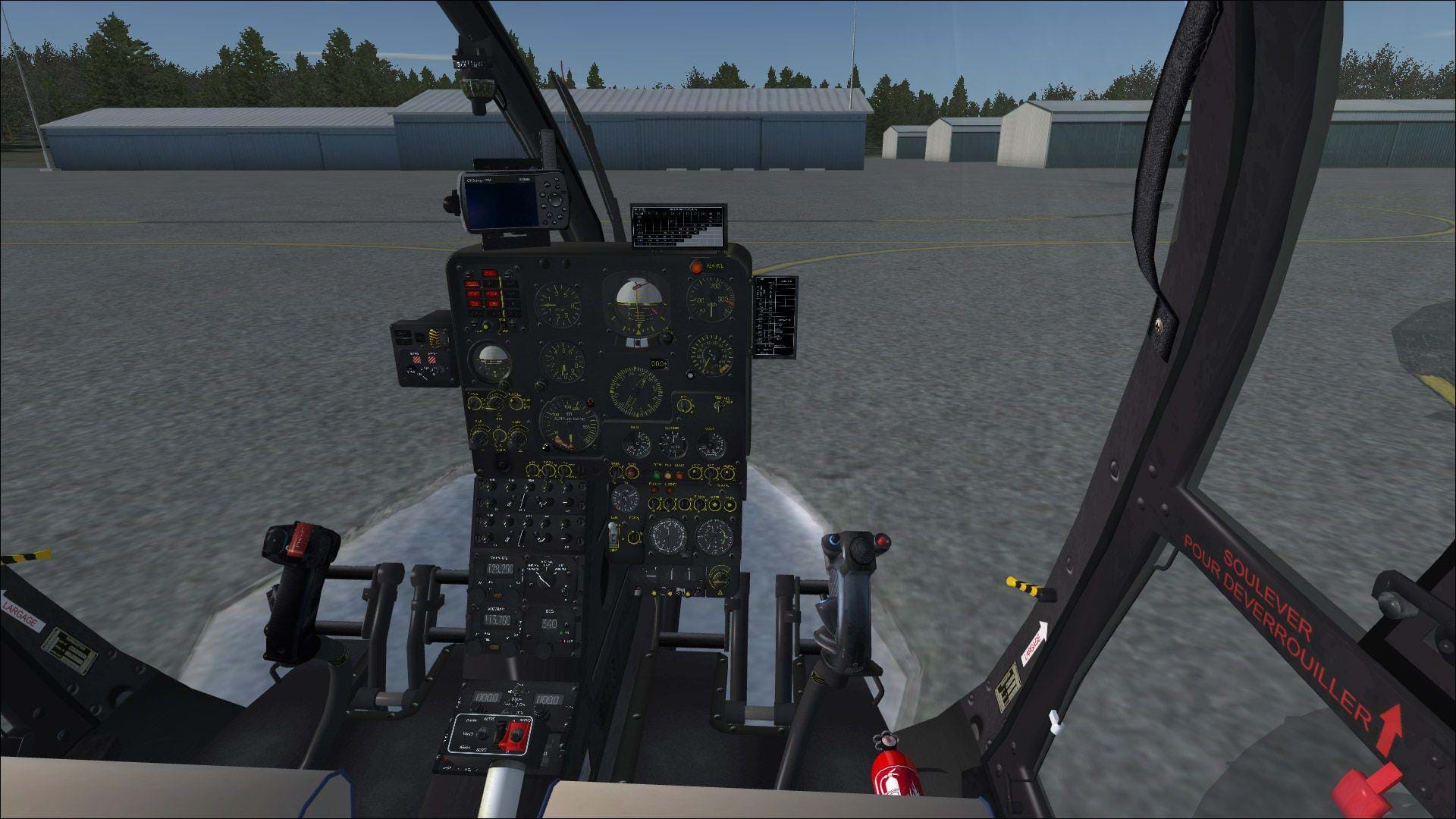 The improvement is pretty clear.

One of my complaints about the previous release of this model is the rotor animation. This appears to have been fixed. The Rotor on this model seems to rotate much smoother than the original.

Along with the improved cockpit, there are some improved systems modeling. If you’re not familiar with the start up of an SA-342, and don’t happen to be able to read or understand French, starting this aircraft is a bit of a challenge. 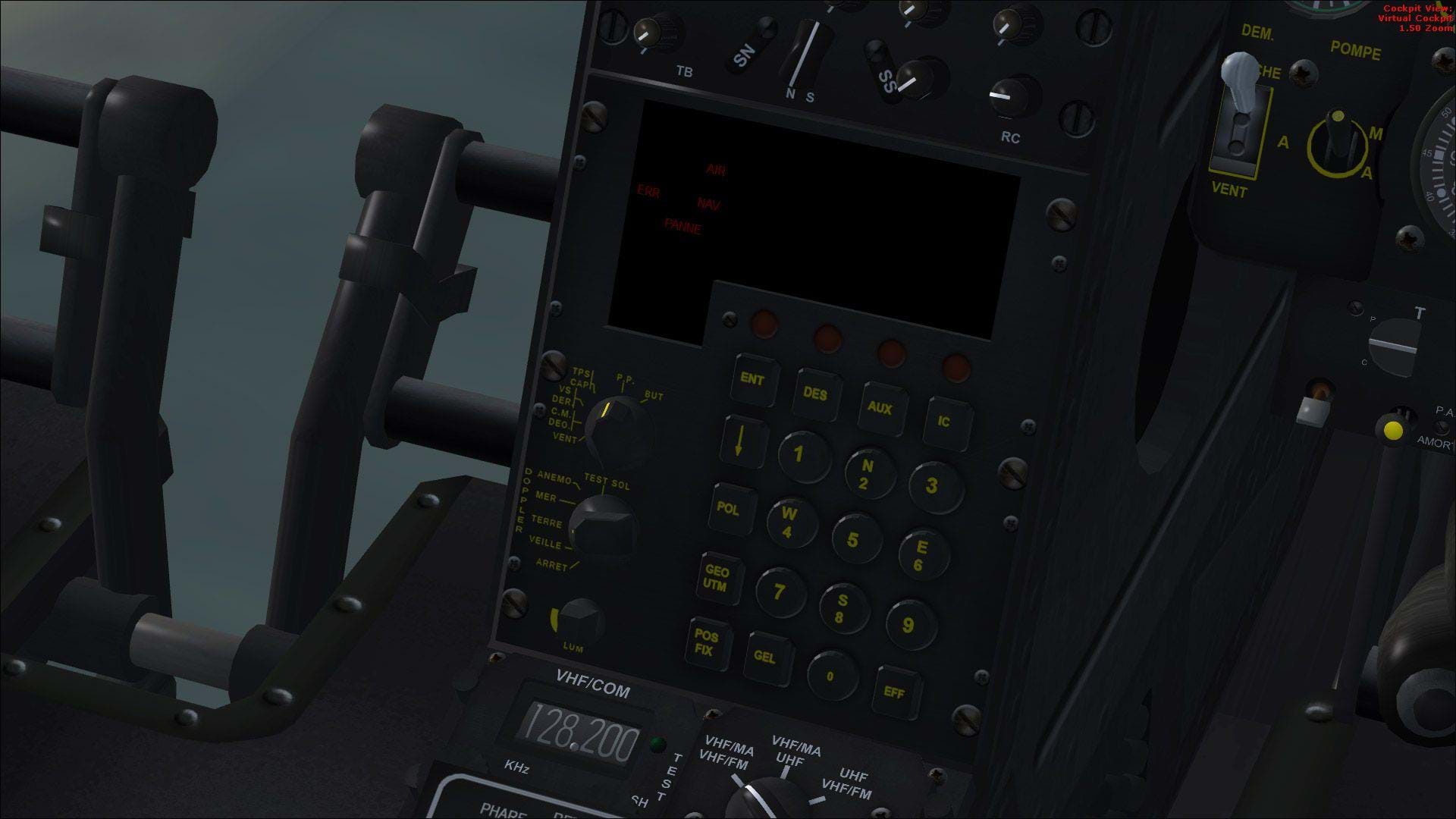 This new release also has what MP Design studio describes as an Auto Pilot. Personally, I couldn’t quite get any real auto pilot type behavior out of it. At best, it functioned more like an attitude and altitude hold system. To be fair to MP Designs, I’ve found that a lot of auto pilot functions on home use simulators have trouble working properly with non self centering joysticks, so that could be the issue. 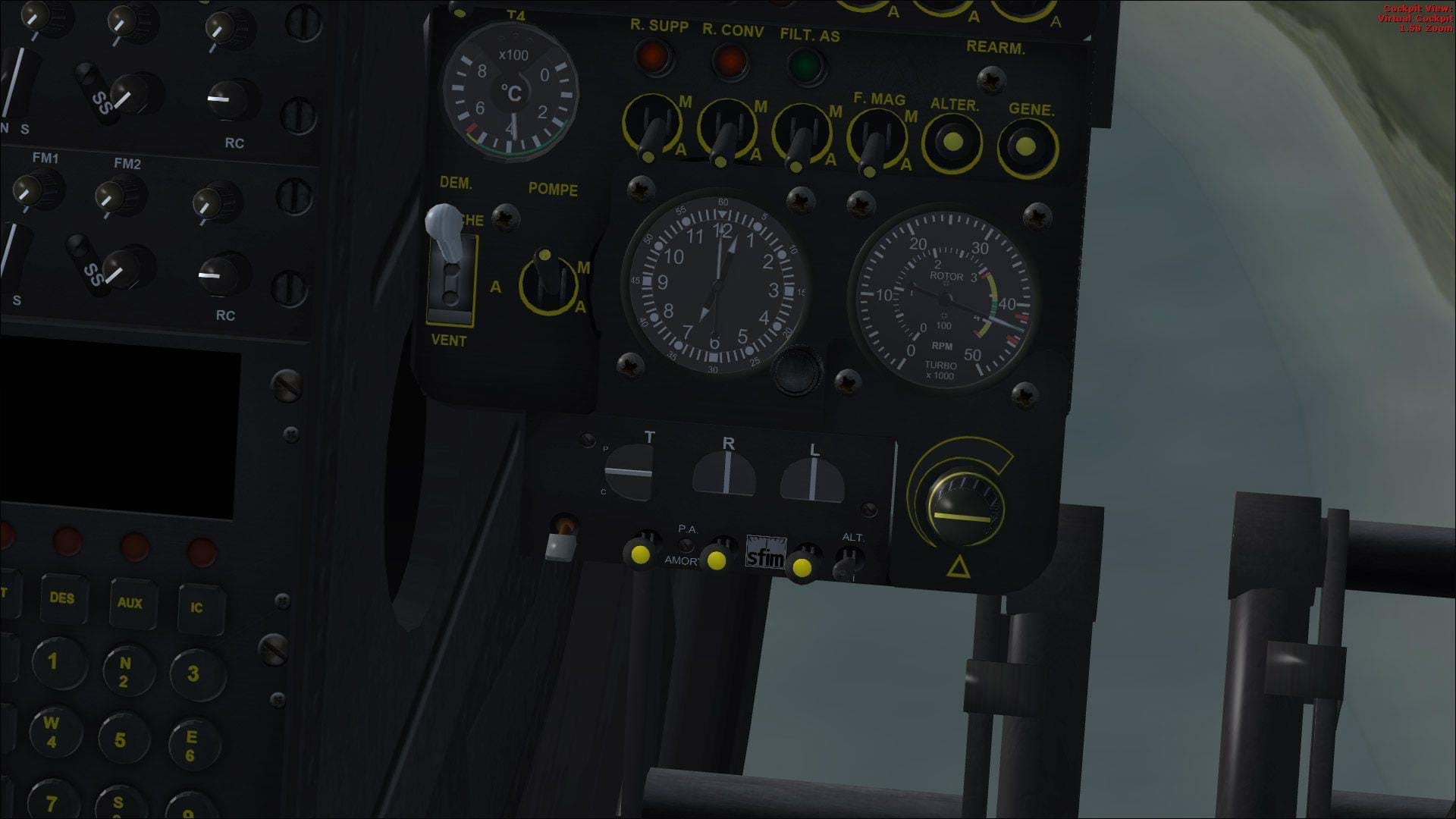 The flight dynamics of this model haven’t really changed all that much with one notable exception. One of the claims that MP Design Studio makes is this models ability to re-create Vortex Ring state. The previous release of this model fell well short of demonstrating anything resembling VRS. With this latest release, MP Designs finally makes good on that claim, but in a way I’ve never seen before in a flight sim.

From an OGE hover, at about 1500 feet AGL, I lowered the collective in an effort to get my rate of decent well past 300 feet per min. After establishing my vertical decent, I raised the collective and noted the aircraft continued to descend just as one might expect with an aircraft that is in fully developed VRS. The way MP Designs does this is by limiting the torque to about 20% when the user raises the collective in the VRS region of flight. You can see this very clearly by looking at the torque gauge in the cockpit. You’ll see the torque needle bounce rapidly back and forth from the actual torque applied to 20% with the needle spending most of its time at the 20% indication. Recovery is easy, lowering the power setting and transitioning to directional flight causes this 20% power limitation to go away.

Artificially limiting torque isn’t the best way to go about replicating VRS in my opinion. However it is effective at providing a reasonable depiction of the condition, and the recovery procedure works as long as you gain forward airspeed.

This is not how ground resonance works.

We’ll discuss why this isn’t correct a little later in the review. But for now, I wanted to explore MP designs ability to re-create ground resonance in FSX, so I immediately sought out some slopes to land on.

The slope landing limitation data included with the first release of this model states that the slope limits of this aircraft are plus or minus 2 degrees laterally and plus or minus 5 degrees longitudinally. These numbers seemed to be pretty shallow to me and not likely to be accurate. I couldn’t find any other definitive data on the slope limits of the SA342, but I was able to locate an evaluation report of the SA342 done by the U.S. Army Air Mobility Research and Development Laboratory done in 1974 and published in 1975. Paragraph 37 of this report says that the SA342 made landings on slopes as steep as 15 degrees, with no increased vibration, droop stop pounding, or mast bumping. This seemed to be a bit more accurate than the numbers given by MP Design studio, so I set out to find a slope steeper than 15 degrees to see what this helicopter could do.

After searching around the Hood River area in Oregon, I found the steepest slope I could land on without the helicopter sliding down the hill side was about 20 degrees. That’s 18 degrees more than MP designs thinks the aircraft could handle, and 5 degrees more than what the USAAMRD Laboratory had reported as favorable landing characteristics. There was no indication of any sort of ground resonance throughout the entire landing. 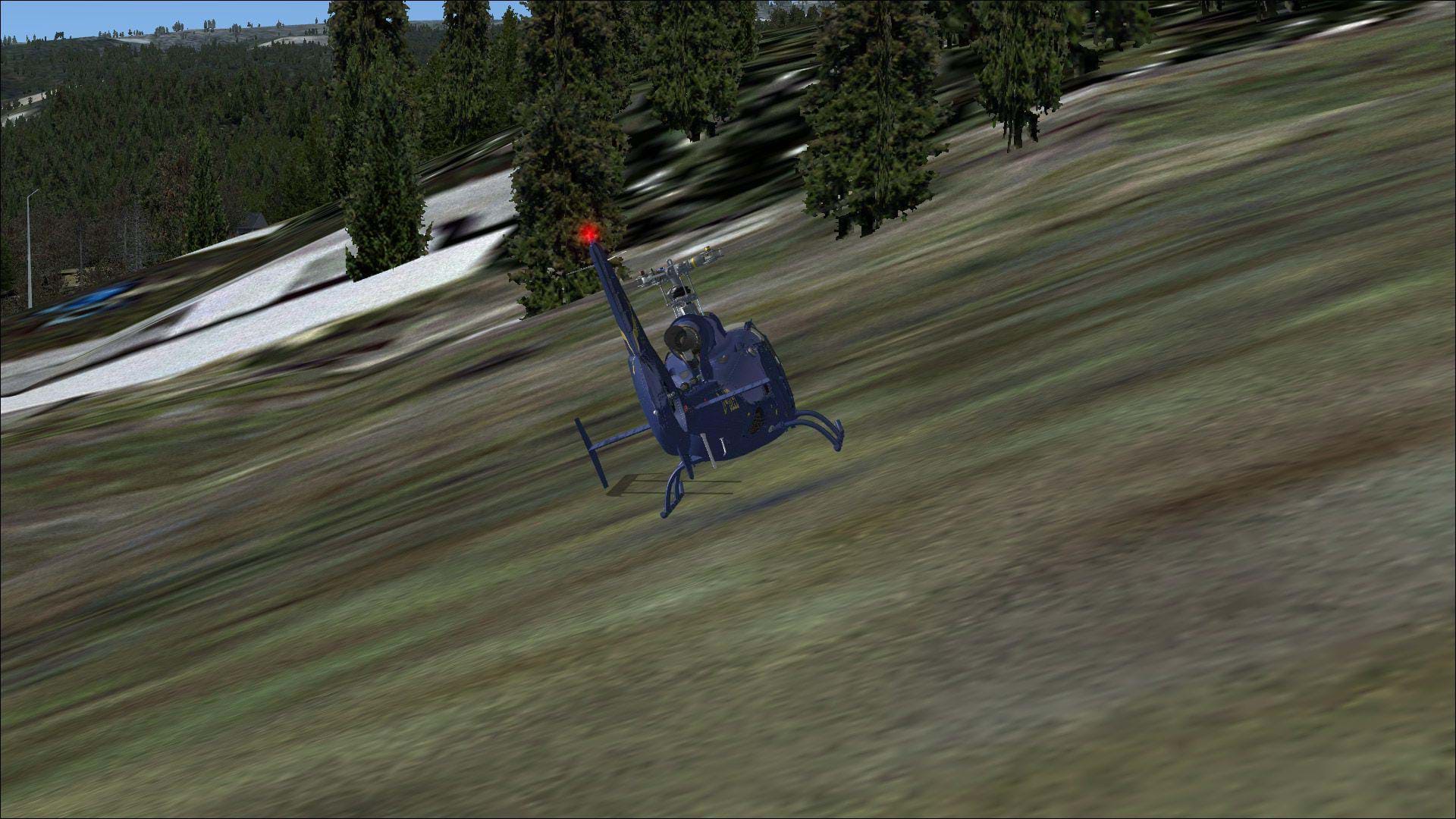 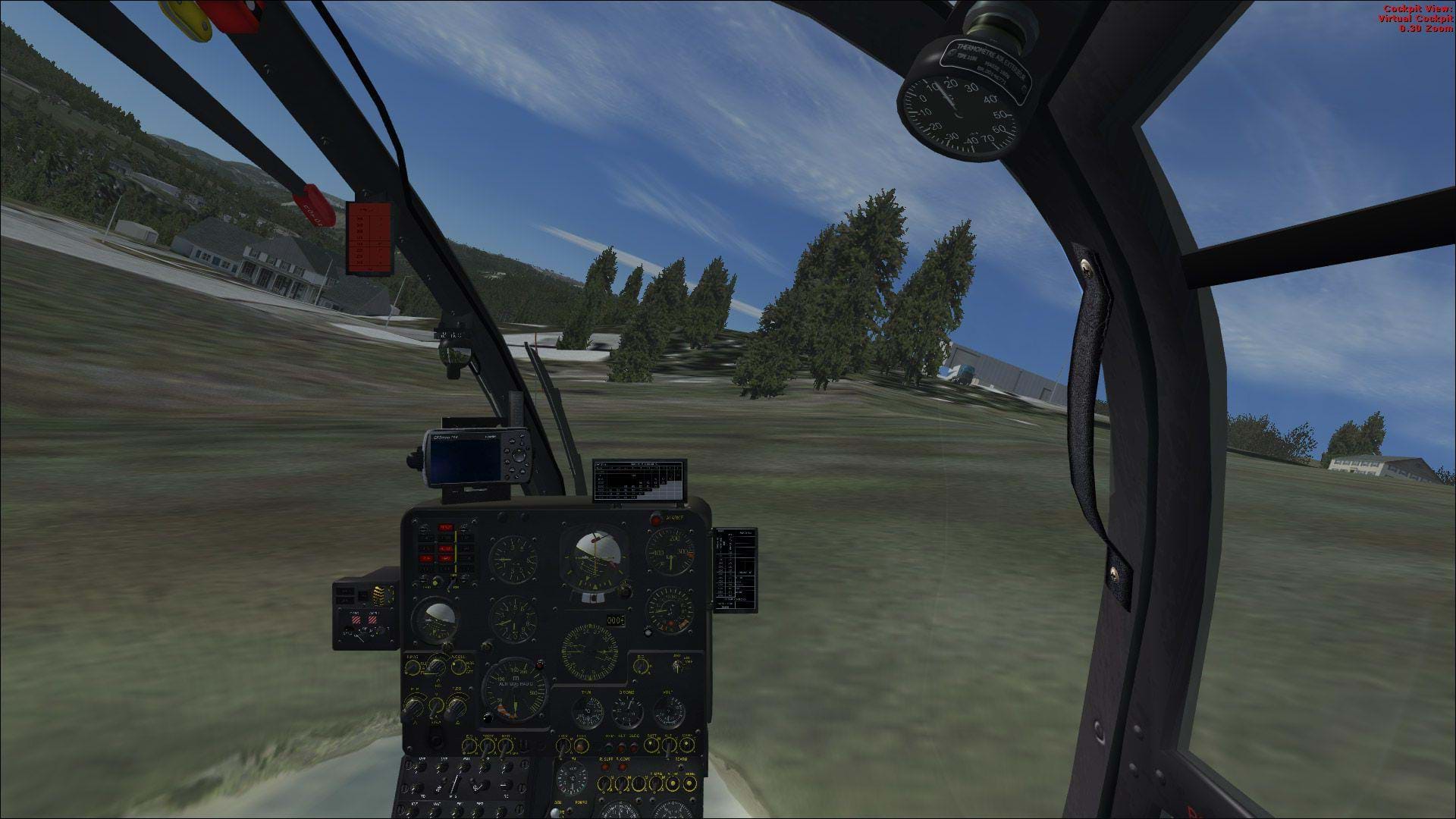 Still not satisfied, I repositioned to another slightly steeper slope. This one was about 25 degrees. The aircraft slid down slope a little, but eventually came to rest. Again, nothing resembling ground resonance was experienced. 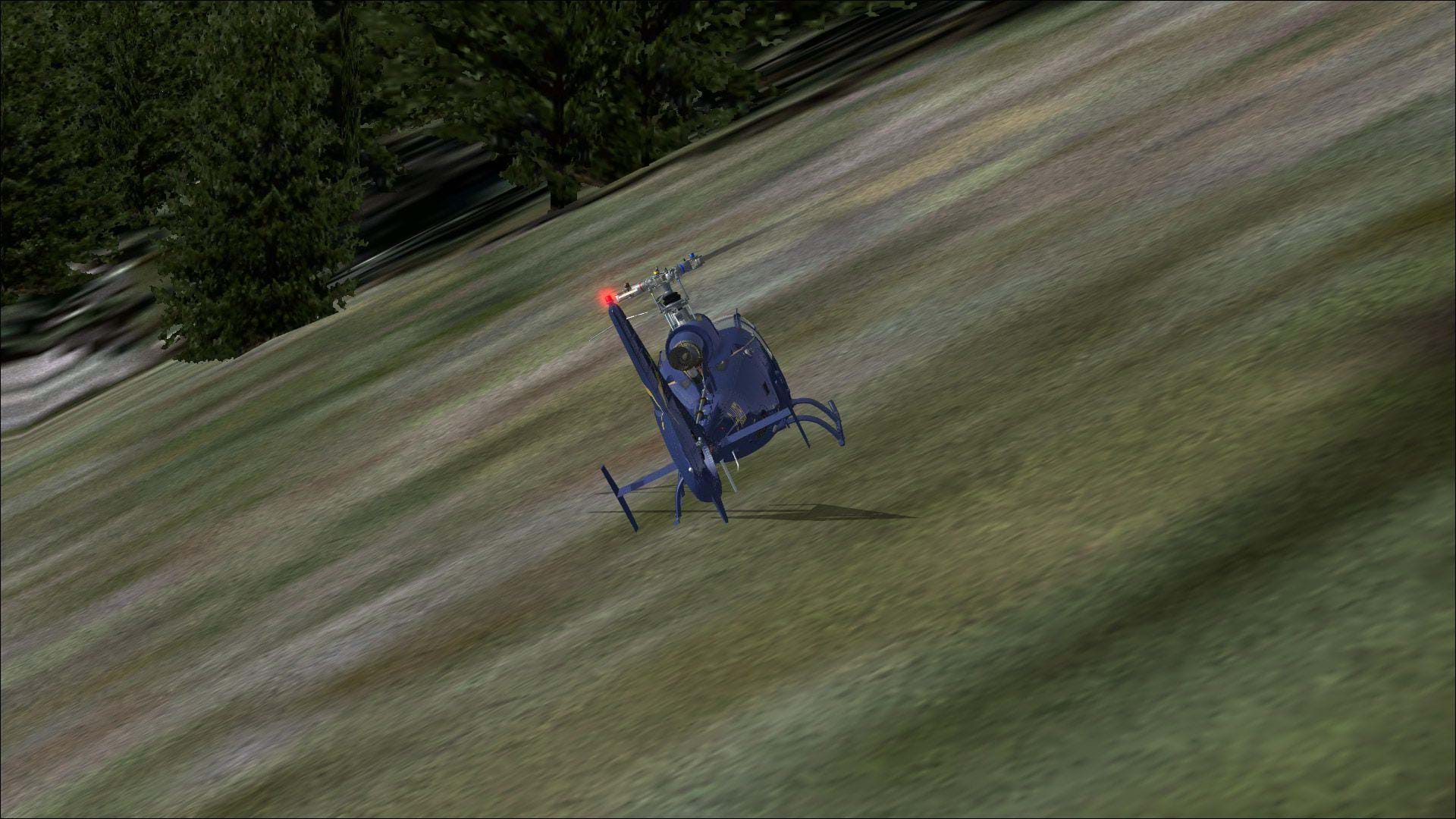 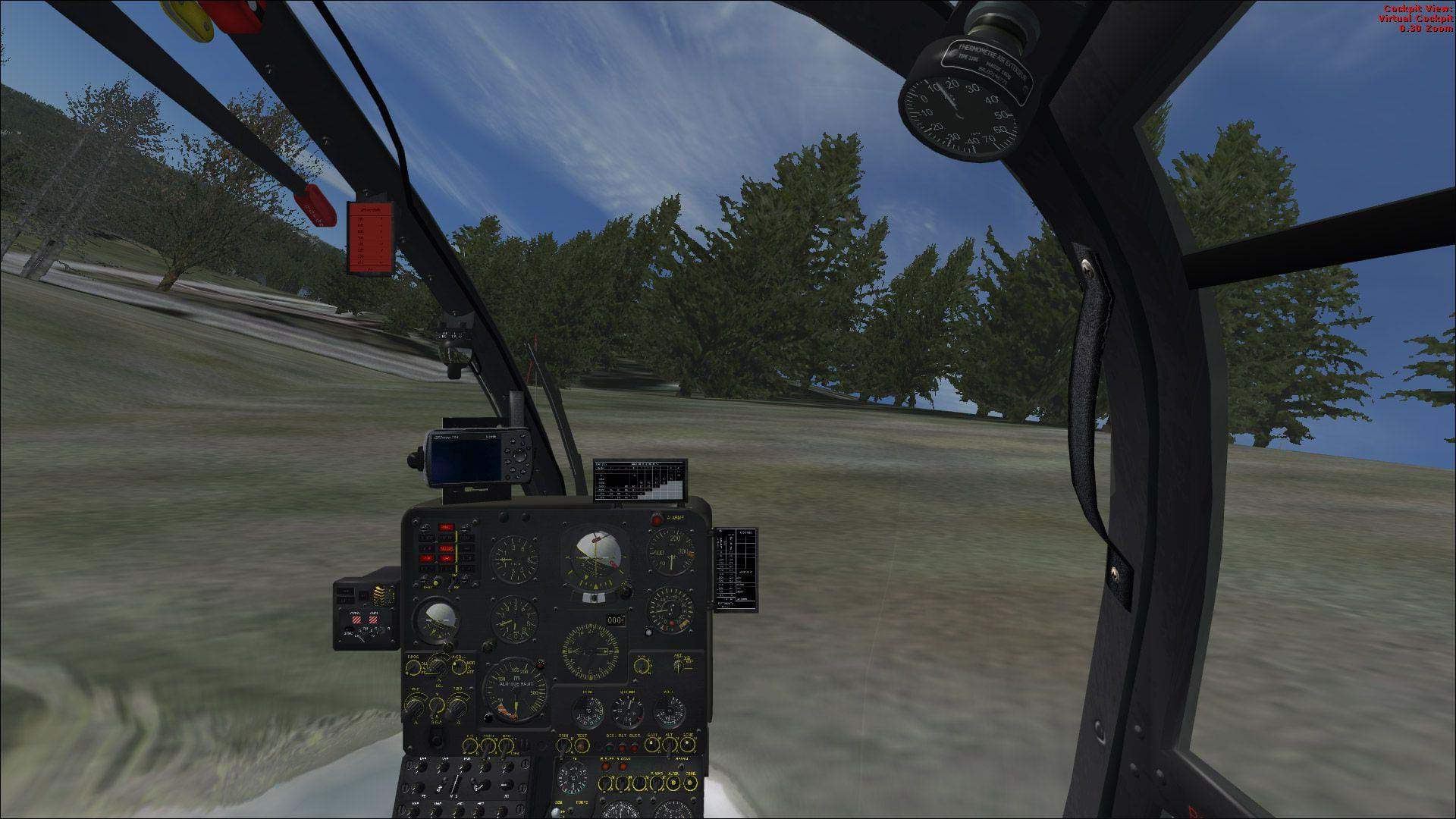 I also did some longitudinal slope landings, and noted that there was a little bit of oscillation. However I determined this was just the aircraft slowly sliding down the hill. I confirmed this by landing at the same slope with a different helicopter with similar results. 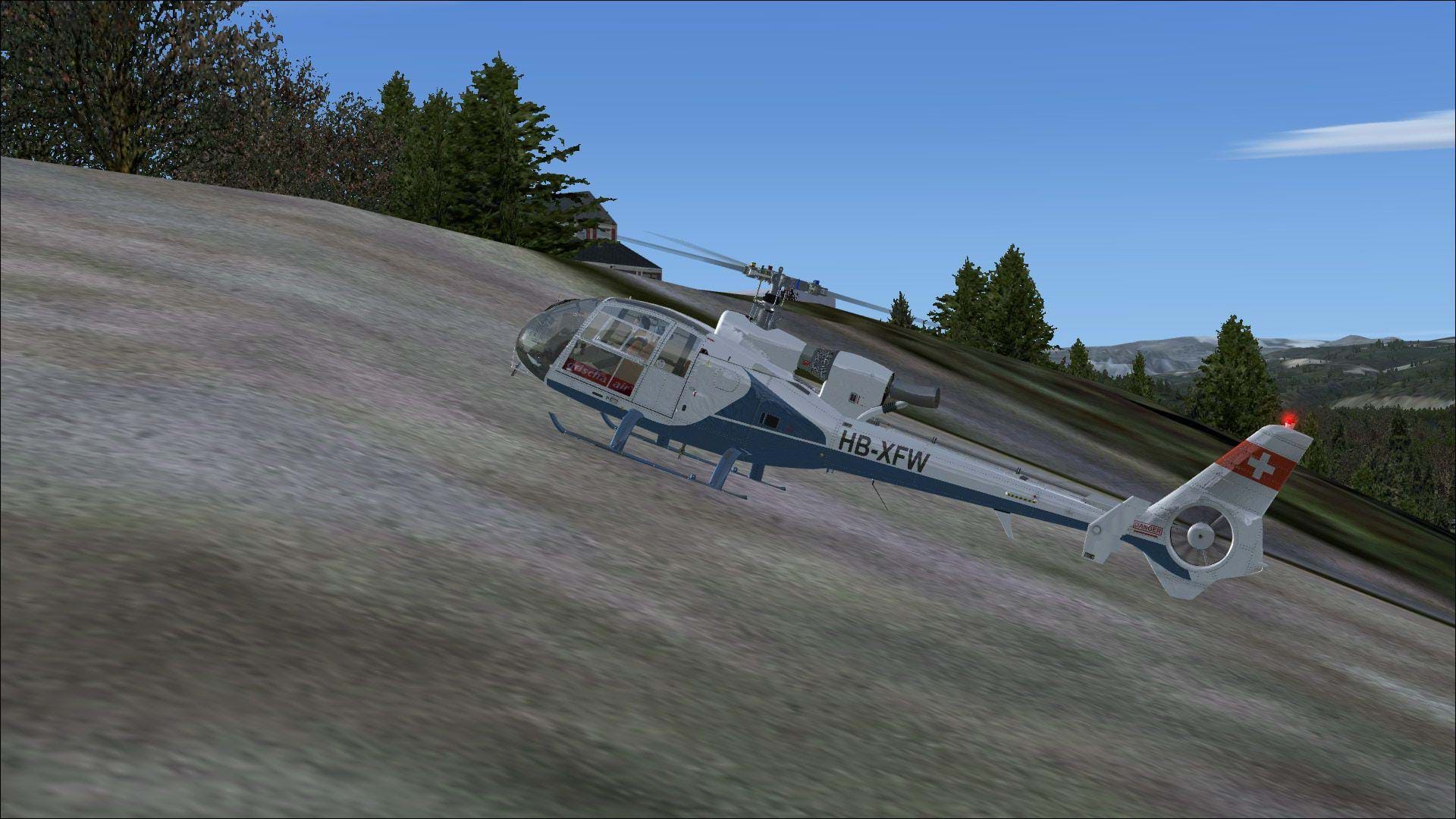 There are a few probable reasons that ground resonance didn’t manifest itself.

It’s likely that both of these reasons are true. So, for those of you who aren’t familiar with what ground resonance is, let us discuss it for a moment.

Ground resonance is a condition where hard contact with the ground sends a shockwave from the landing gear, thought the fuselage and into the rotor system. This shockwave can disrupt the natural somewhat equal spacing between the rotor blades, causing an unbalanced condition that if left uncorrected will amplify and grow until the helicopter shakes itself apart.

So, let’s have a look at the mechanics of how this occurs, to further explain why MP designs description of ground resonance is incorrect. To get into ground resonance, a helicopter must first be equipped with lead/lag hinges on the rotor hub. So basically, this is a condition that fully articulated rotor systems are susceptible to. Semi rigid systems like those found on the Bell 206 and Robinson R22 are immune to this phenomenon. Some argue that fully articulated rotor systems equipped with an odd number of rotor blades are more likely to experience ground resonance than one with an even number of blades. I haven’t seen any data to support this claim, that doesn’t mean that the data doesn’t exist, I just haven’t seen it. It’s also said that helicopters equipped with wheeled type landing gear are more likely to experience this phenomenon, which there is some data to support. Another requirement for ground resonance to occur is, as the name would suggest, the aircraft being in contact with the ground.

In normal hovering flight the angle between the three blades of the SA342 or any other three bladed fully articulated rotor helicopter is about 120 degrees. Now let’s say that the pilot landing the SA342 accidently strikes the left aft portion of the landing gear on the ground as he’s lowering the aircraft to the ground. This strike would then cause a shockwave to travel through the fuselage into the rotor system, and can change the distance between the rotor blades from 120° between each blade, to maybe 123° between blades 1 and 2 and blade 2 and 3. This would then make the angle 115° degrees between blades 1 and 3. 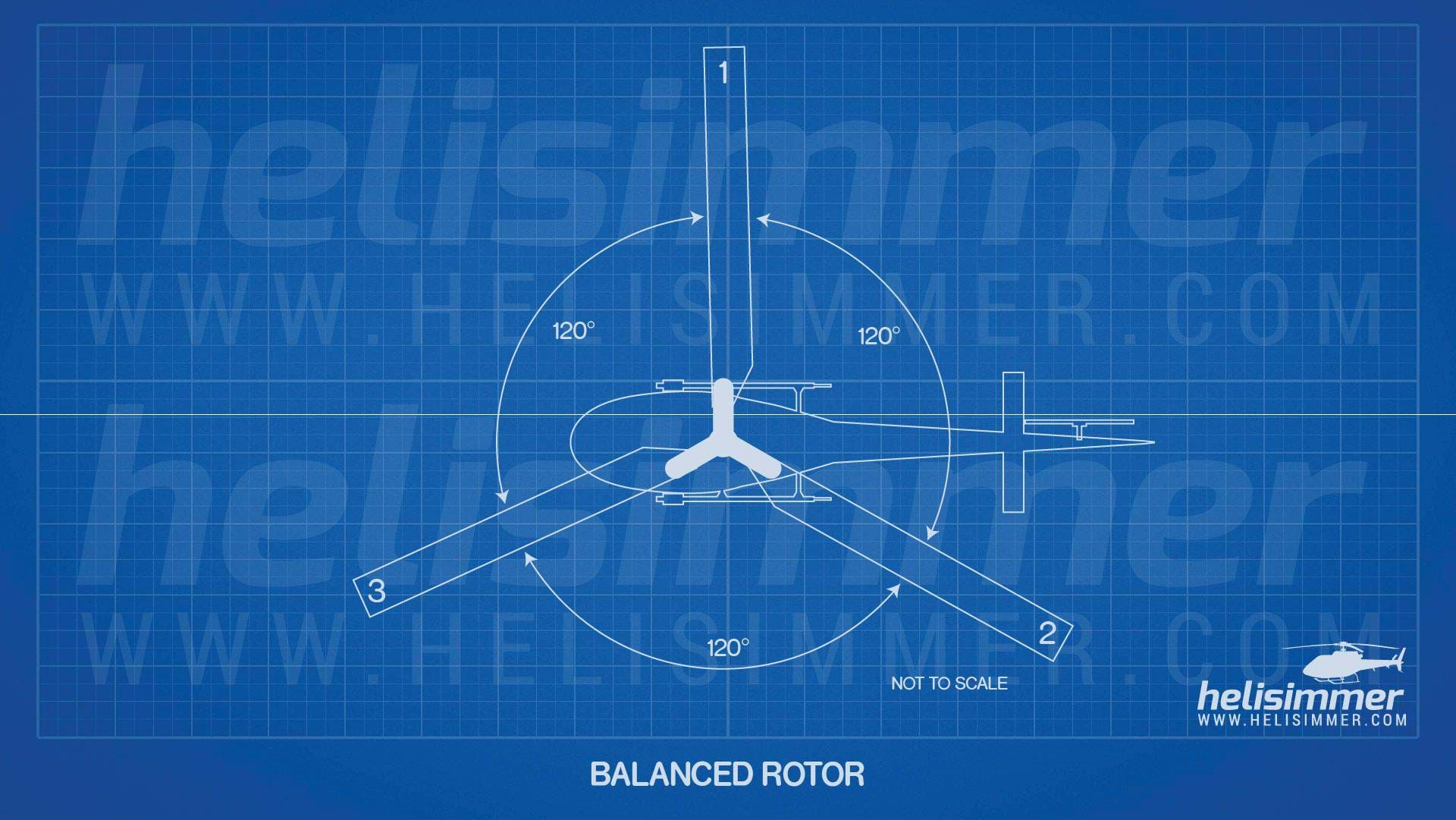 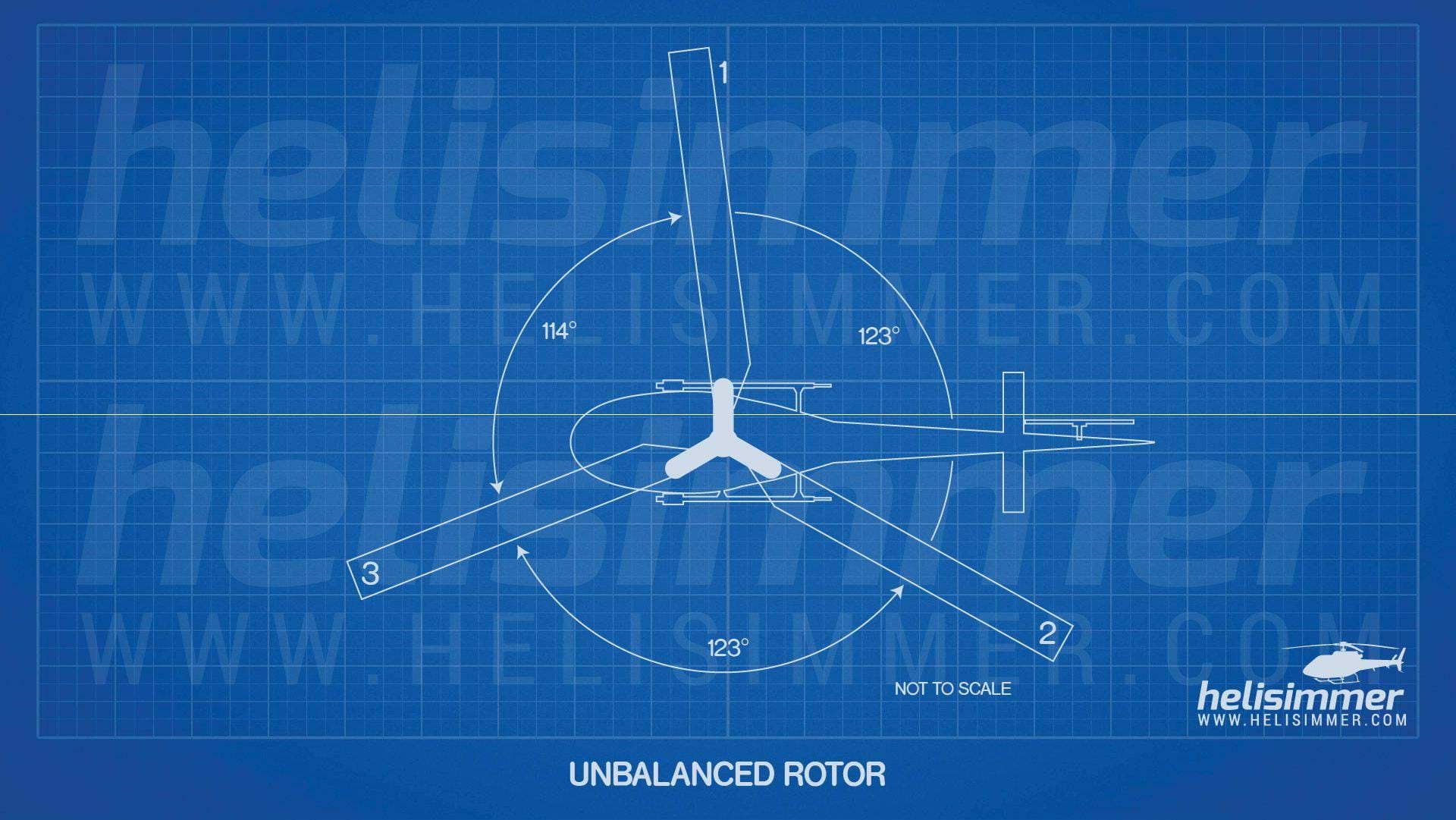 This puts more blade mass on one side of the spinning rotor disk than the other creating a severely out of balance situation. As long as the aircraft remains in contact with the ground, the resonant frequency of the helicopters fuselage will amplify this effect, further exacerbating the problem. If left uncorrected the unbalanced rotor system will cause the helicopter to rapidly disassemble itself.

There are only two methods to counter ground resonance once it has begun. The preferred method is to get the aircraft off of the ground as soon as possible. This breaks the shockwave cycle, and allows the main rotor blades to return to their natural spacing on their own.

However, ground resonance isn’t always caused by a less than soft landing on one portion of the landing gear. It can also be caused by a defective or worn lead lag dampener in the main rotor, or by a fault in the dampening of the landing gear. In these cases, ground resonance may manifest itself during run up where the rotor RPM isn’t high enough for the helicopter to take flight. In this case the pilot must go flat pitch on the collective and reduce the RPM of the rotor to reduce the severity of the out of balance condition.

One thing MP designs almost got right was that landing on a slope increases your chances of hitting one portion of the landing gear particularly hard and making the aircraft more susceptible to ground resonance. However, now that we know how ground resonance works, we can see that it has nothing to do with exceeding the slope limitations.

I did try to replicate ground resonance by doing hard landings on the corners of the landing gear with no real indication of the onset of an unbalanced rotor.

This is a much improved version of the original MP designs SA342 Gazelle. There are still some things that would need to be improved for it to be competitive with Milviz or Cerasim. In my opinion the flight dynamics for this helicopter still fall short of what is being advertised. I’ll give them credit for their depiction of VRS, but there isn’t any clear improvement in any of the other areas this model claims to be able to simulate. In addition to this, their claim to be able to replicate ground resonance is false as far as I can tell. It’s far from the most realistic helicopter available for FSX, but for the price, this is a fun light single engine helicopter to fly around in.

Installation 10
Model 9
Textures 9
Sound 9
Systems 8
Flight dynamics 4
Total score
8
* The above final rating is calculated from a weighted average and not the direct arithmetic average. This means that some elements of the review will have a higher influence in the final score than others.
Click here to purchase/download or more information