A lot of us are always looking for something to do on the sim. Mission Generator might be your best buddy on the path to achieve this goal.

In the quest for giving meaning to the time spent in our sim, you may have gone through several stages. Learning the sim is, obviously, a large one and something that makes simming fun for some time. Until it doesn’t anymore.

So, we look for the next thing. And the next. The next helicopter. The next scenery, the next challenge. Autorotations. Taking off with an R-22 from Mount Everest. Landing on a pinnacle or a moving ship.

And then we accomplish that, and it gets old again.

Community-based offers such as FlightSim Economy (FSE) are a good solution but they can also get old really fast.

I’ve been a user of FSE for some years now but the offer for helicopters has always been very low – although it’s possible to “cheat” and make it more of a helicopter environment but you quickly get limited by a set of things.

The one that made me practically abandon FSE was the aircraft monthly fee. Yes, it’s more realistic but FSE should be a hobby, not a chore. Having to “work” to pay for the fee became boring and not feasible to me – especially because I can be inactive for a couple of months as the FSE bank goes get their fee. So, I sold my AS350, that took me a couple of years to buy and quit.

But I would still like to have a bit more of meaning in my sim so, like a lot of you folks out there, I role-play. I’ve always said that we are a bit of role-players. We get into this character – a pilot – make up a story and it.

Still, I would like something else to do part of this role-play for me. Something that made up a bit of the story for me and have me flying.

When I heard of Mission Generator, I had to try it.

What is Mission Generator

In a nutshell, Mission Generator is a plugin that generates random missions, based on the aircraft you are flying and your location.

Once you finish your mission, you will get experience points. Gather enough experience points to level up. Each level unlocks new missions, increases rewards for certain mission types, and makes your favorite kinds of missions happen more often.

There are no penalties for not flying for a while and no safeguards against cheating. Flight simulation should not become work…

All save games are simple text files that can be hand-edited if necessary and all source code is readable Lua code that can be expanded.

There’s something in the text above that really caught my attention and makes me wonder if the author is also a user of FSE: “There are no penalties for not flying for a while and no safeguards against cheating. Flight simulation should not become work…”

Installation is easy. Simply unzip the files into your Resources\plugins folder.

When entering X-Plane, you will now have a new menu entry inside the Plugins menu called Mission Generator.

On this menu you will be able to manage everything regarding the plugin: check the mission list, see your profile, configure thing, etc. 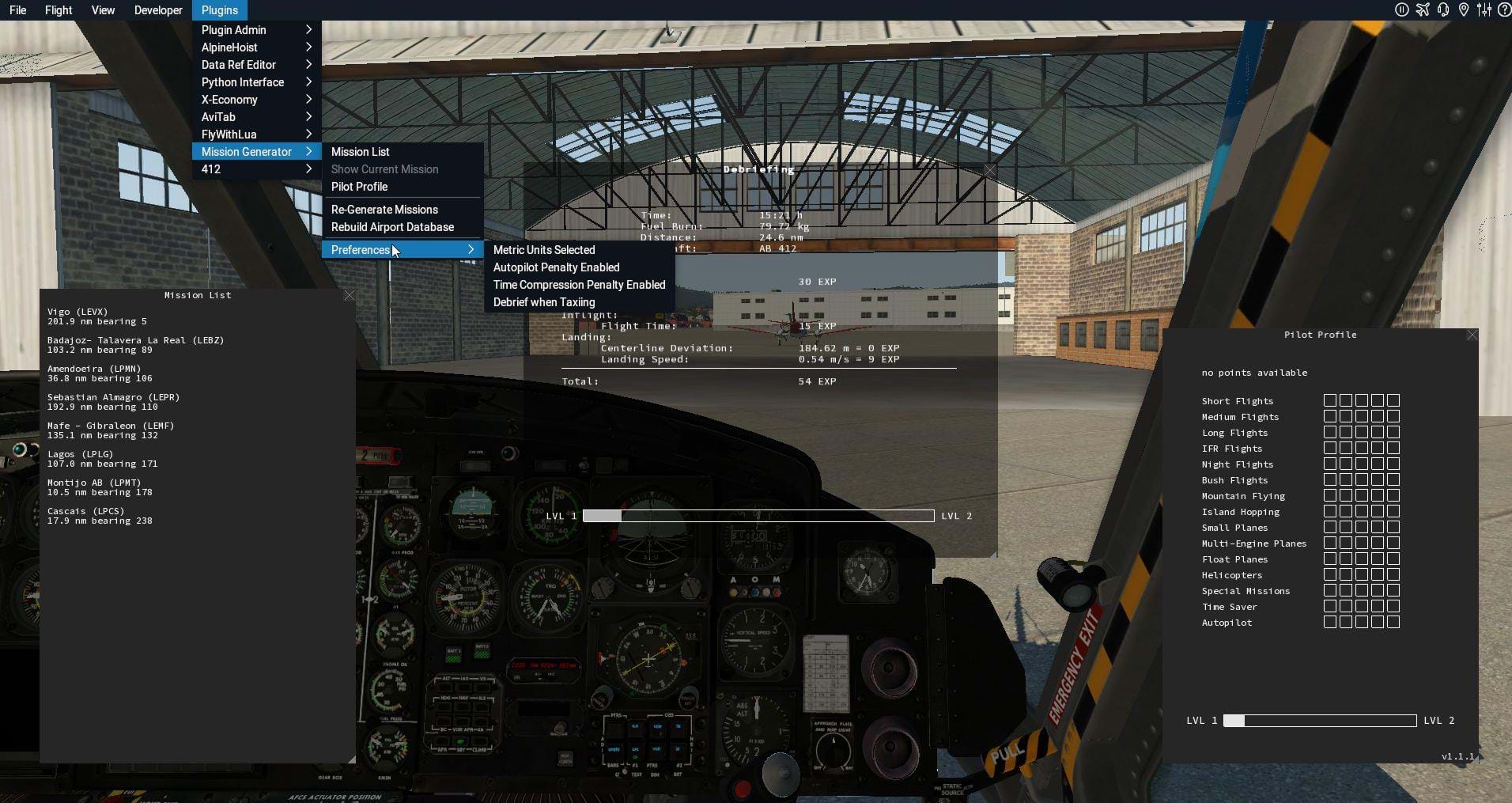 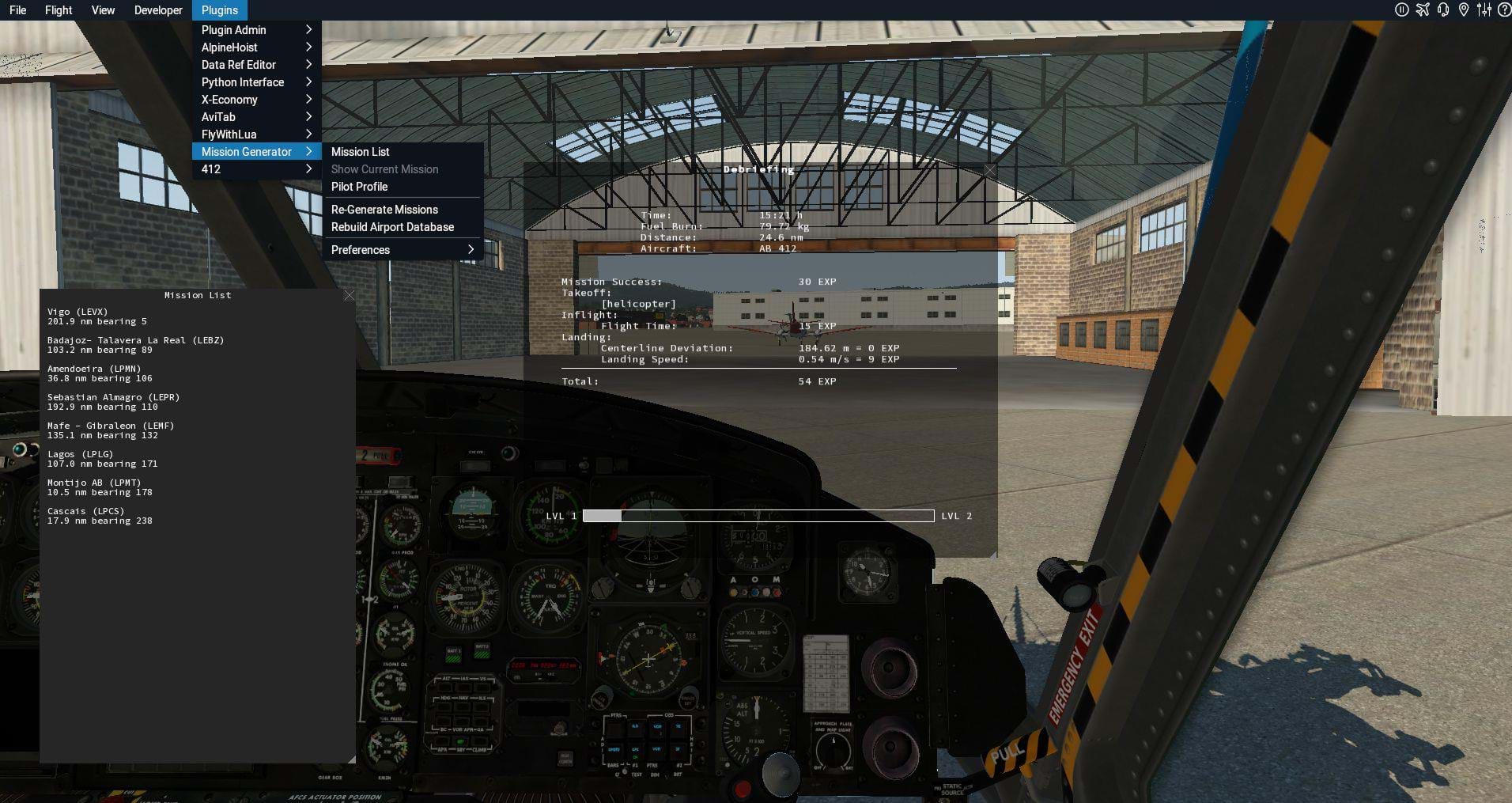 One of the options allows you to re-generate missions but I have tried it several times without success. Every time I tried to re-generate them, no new missions appeared. Not even after closing the mission list and opening it again. A bug, perhaps?

Starting a mission is easy. Open the Mission List, click on a mission, read what’s it all about and, if you’re up for doing it, click the accept button on the bottom right corner of the Mission Briefing. Mission Generator will now start tracking it for you. 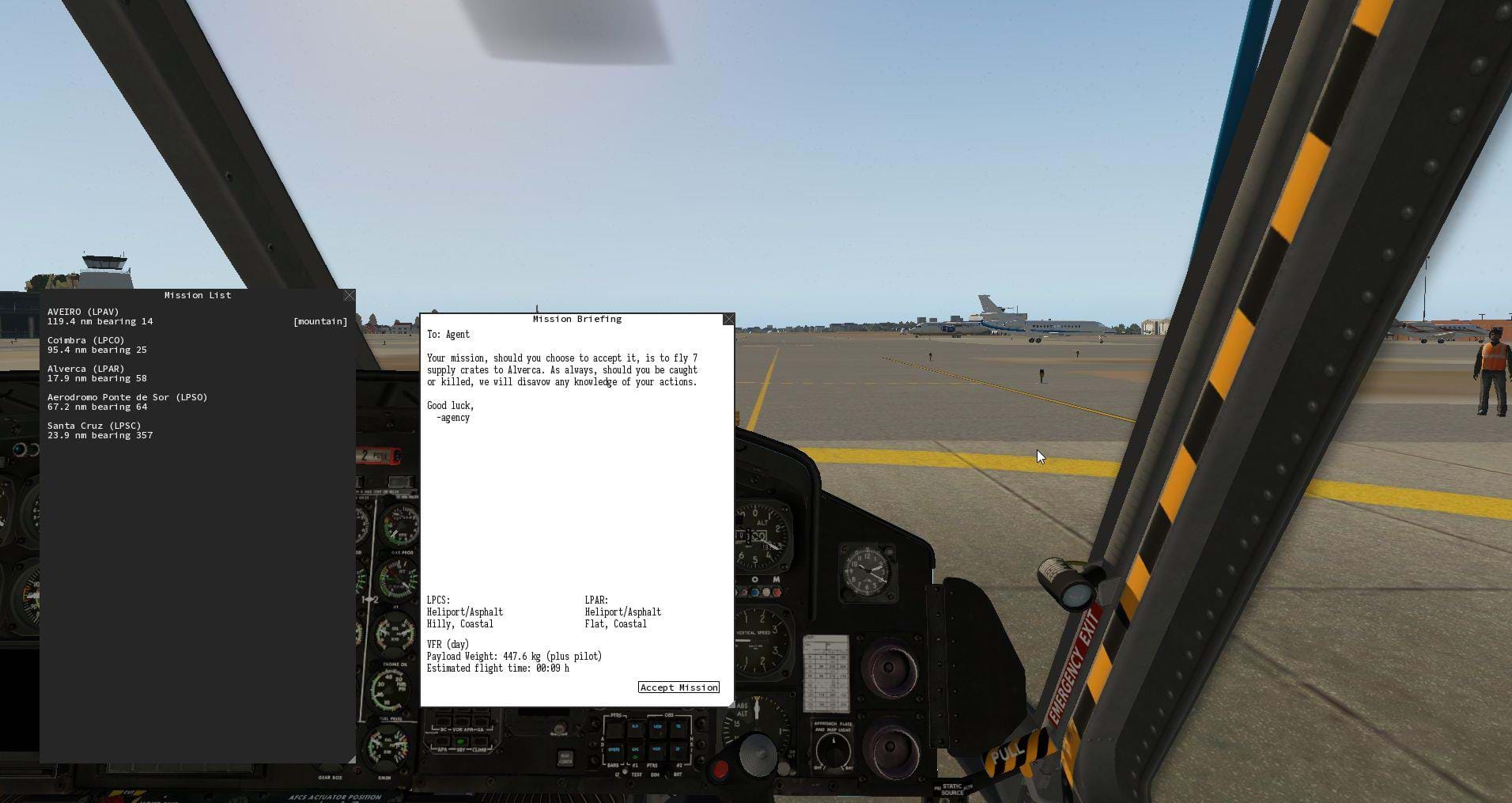 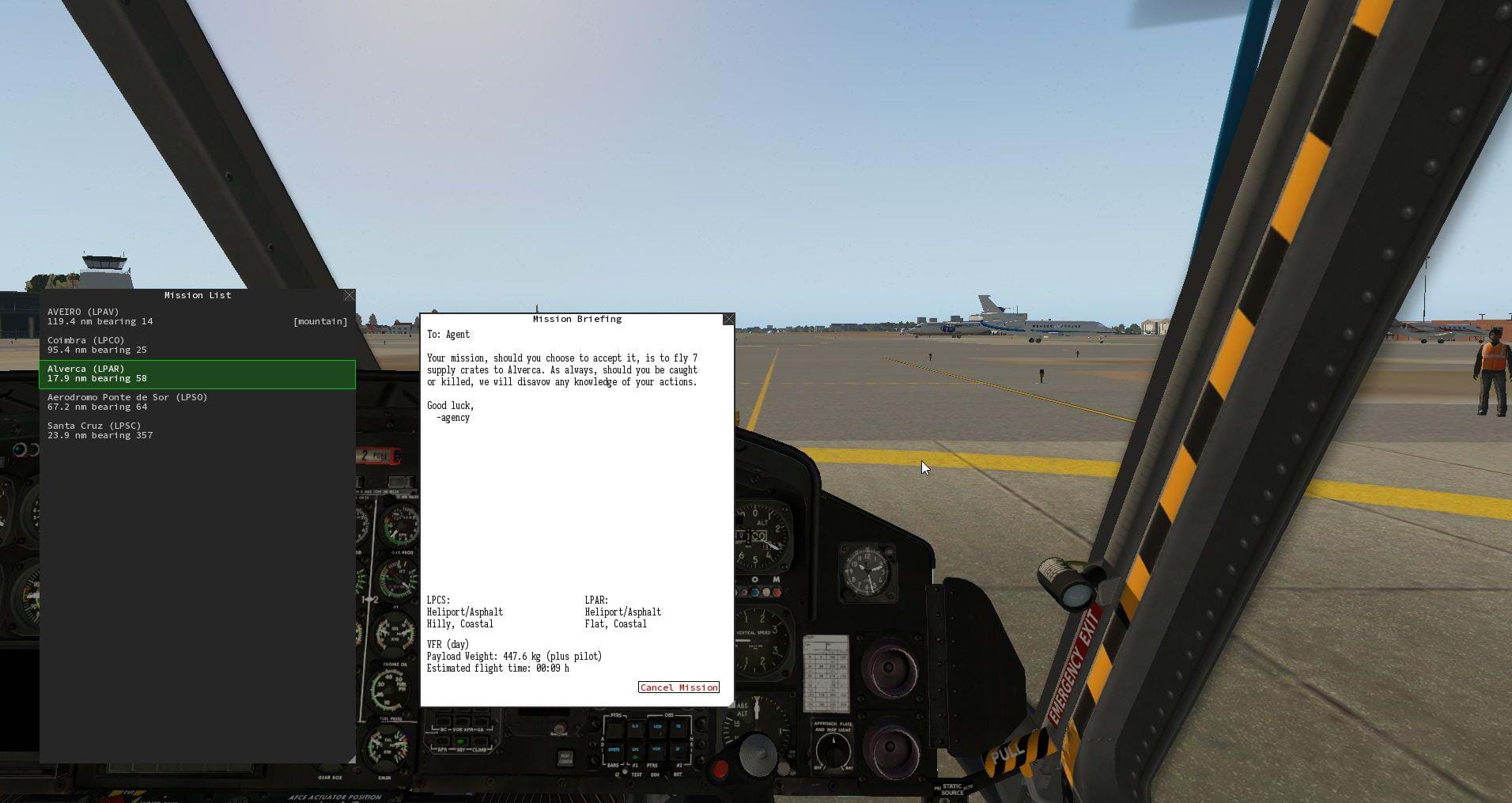 Of course, you should be in the airport you want to take off from and using the aircraft you want to fly for this mission as the plugin uses both to generate your missions. 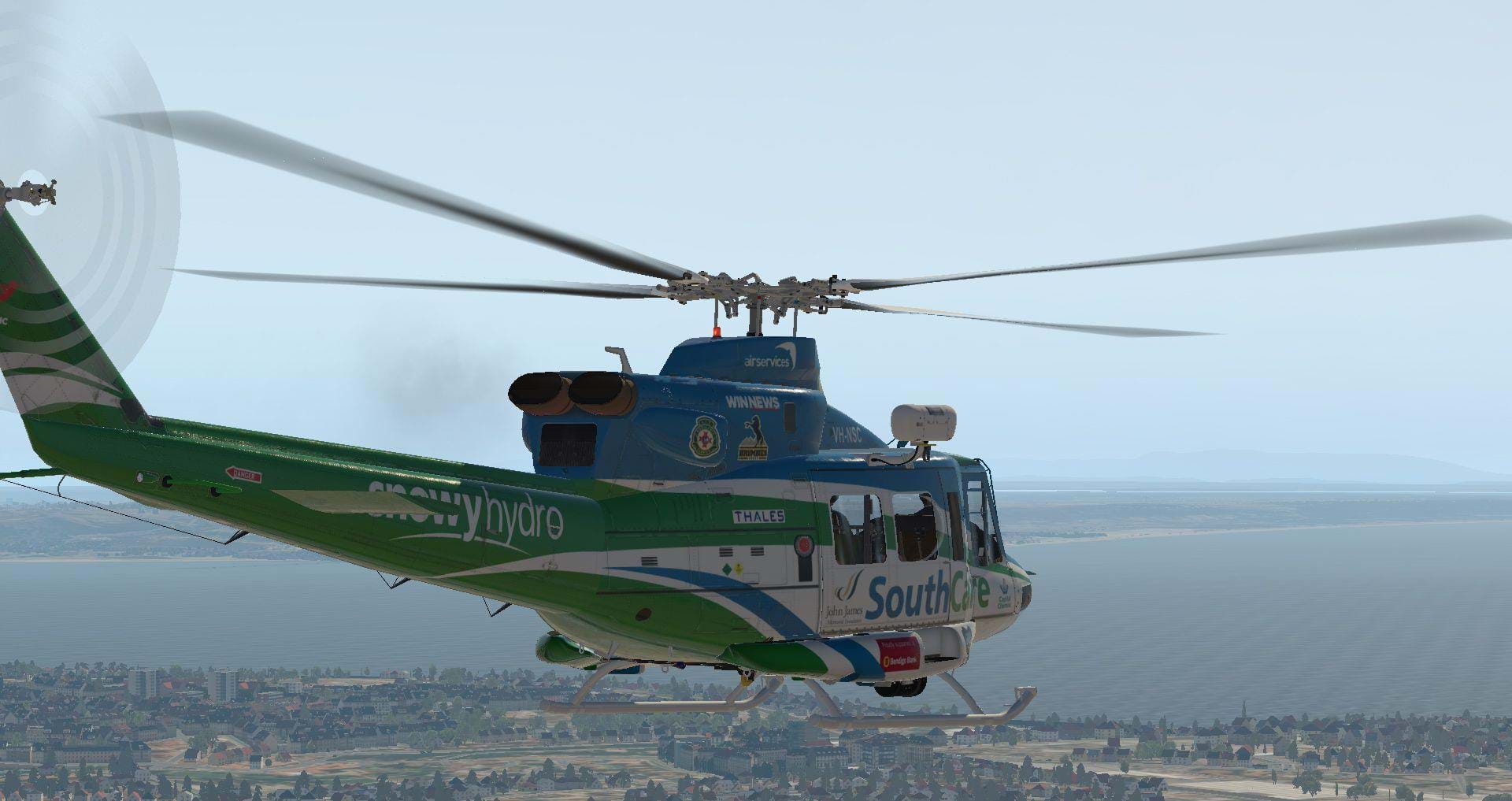 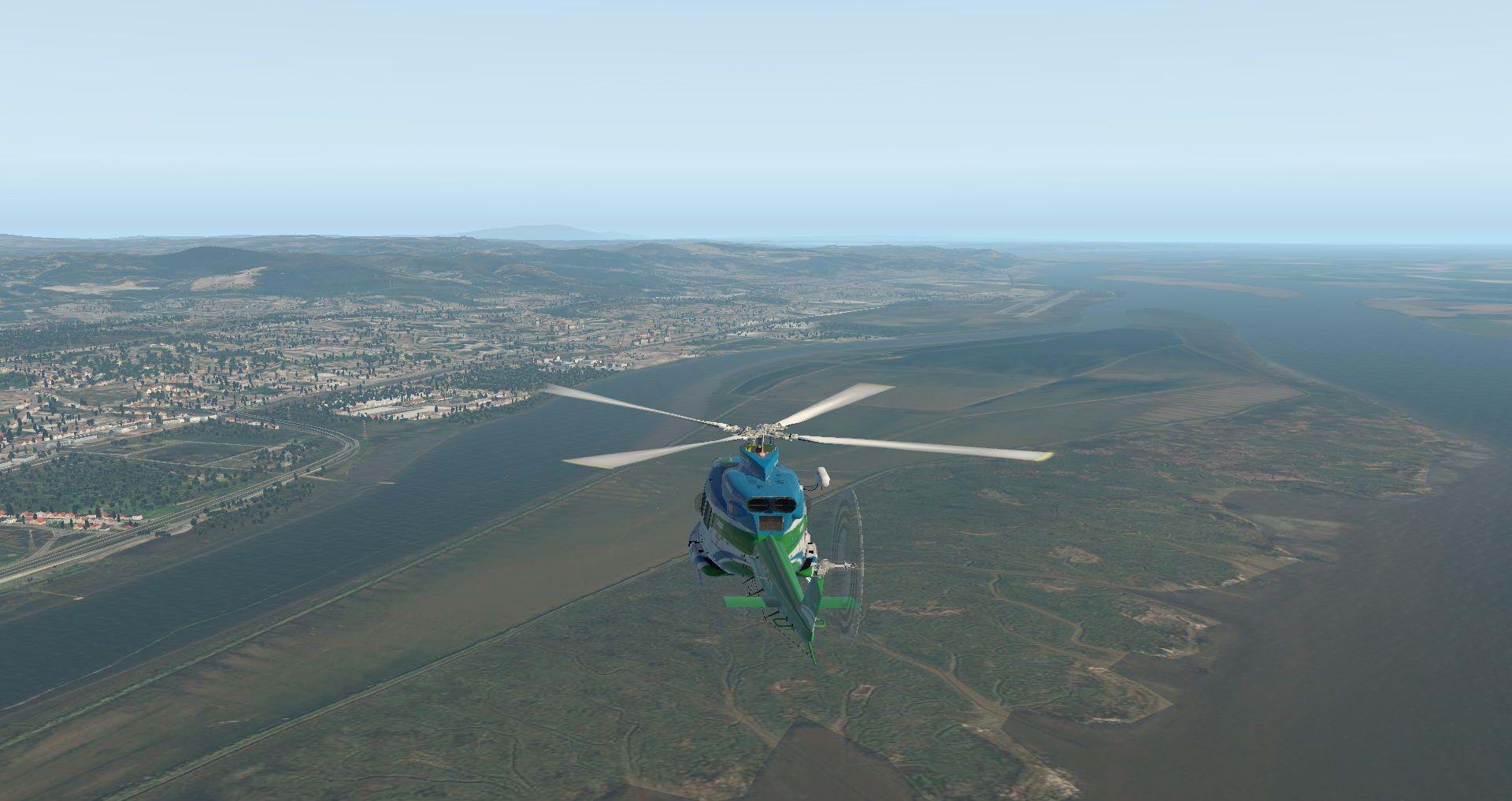 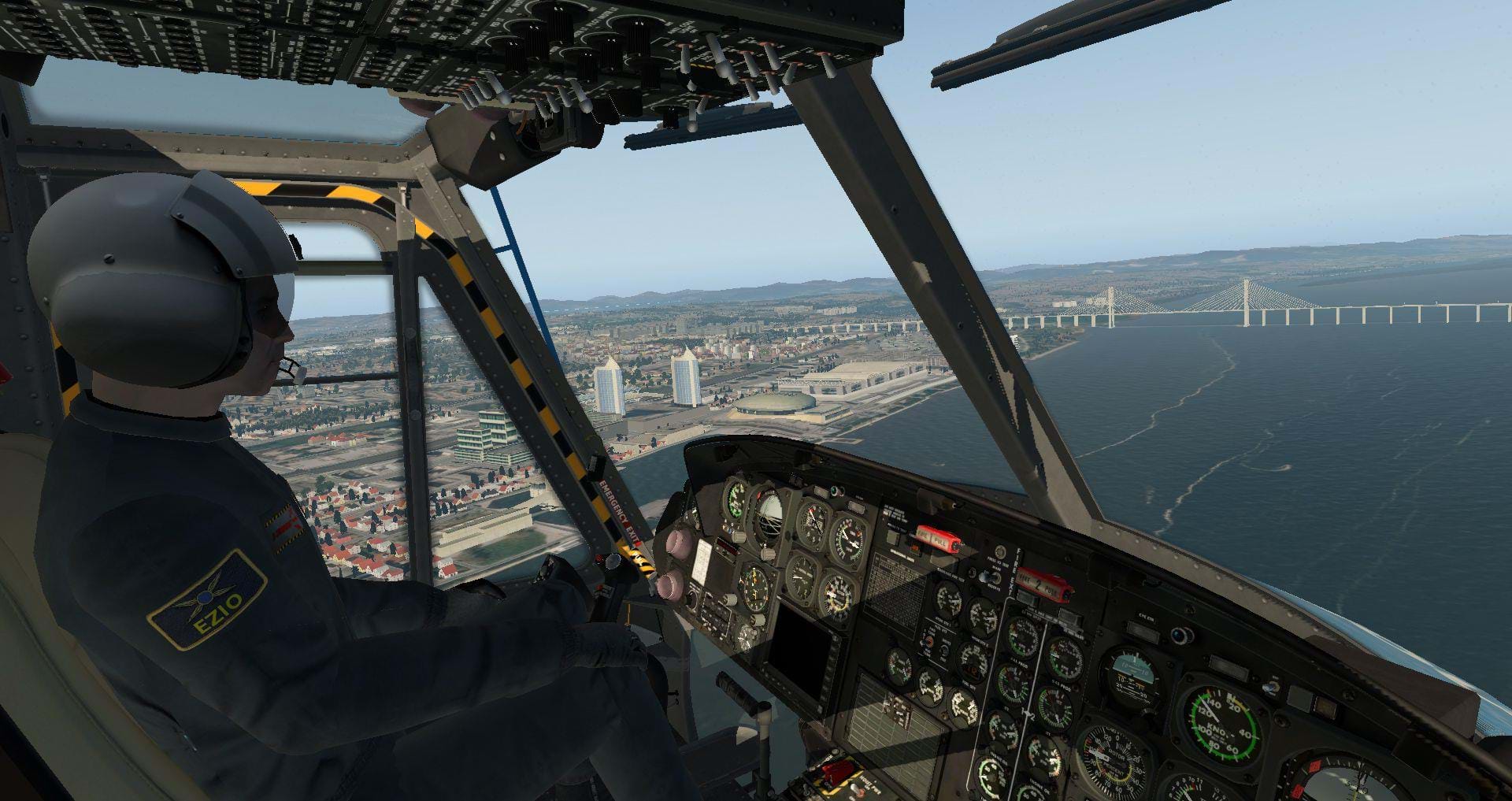 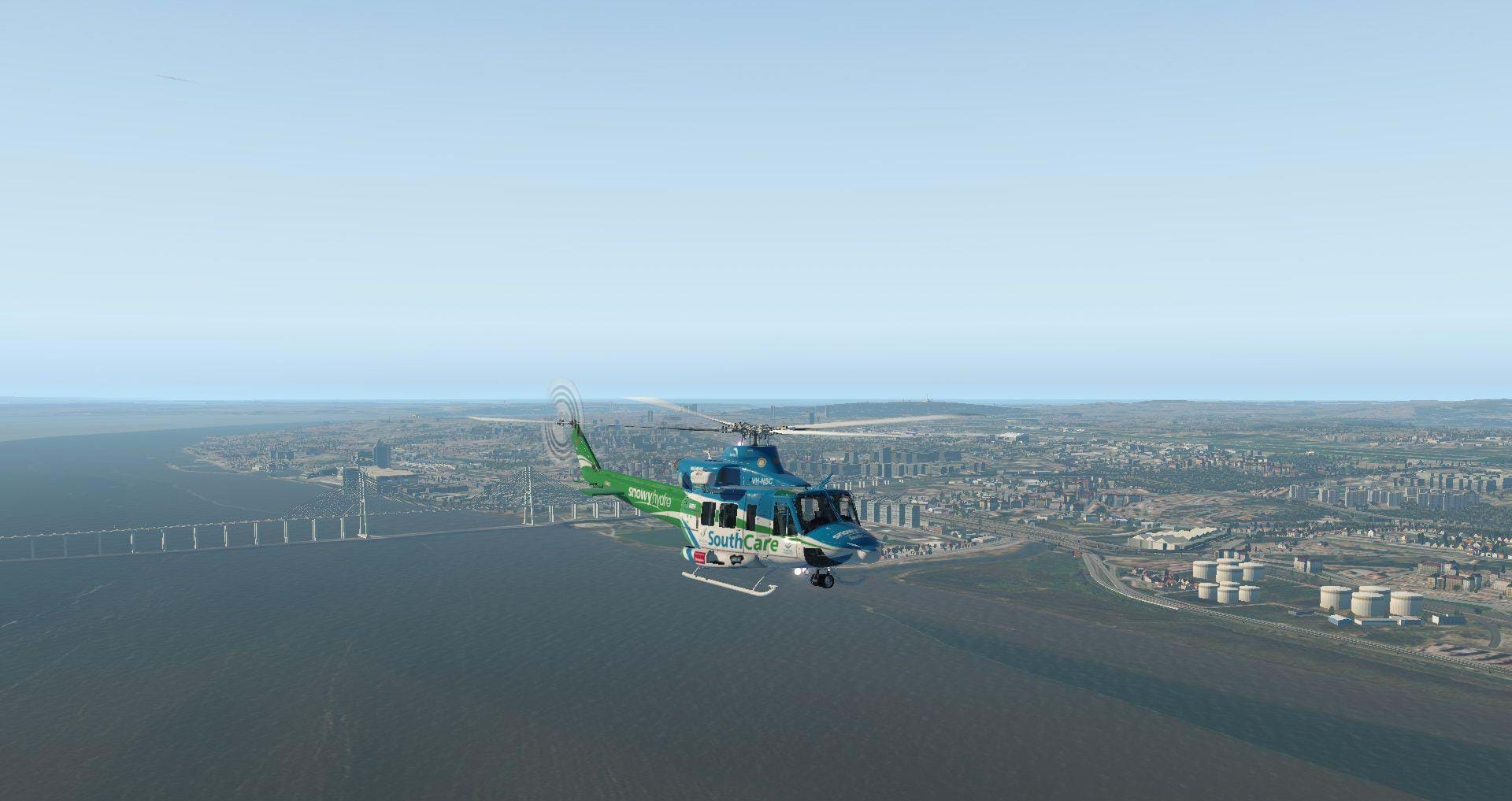 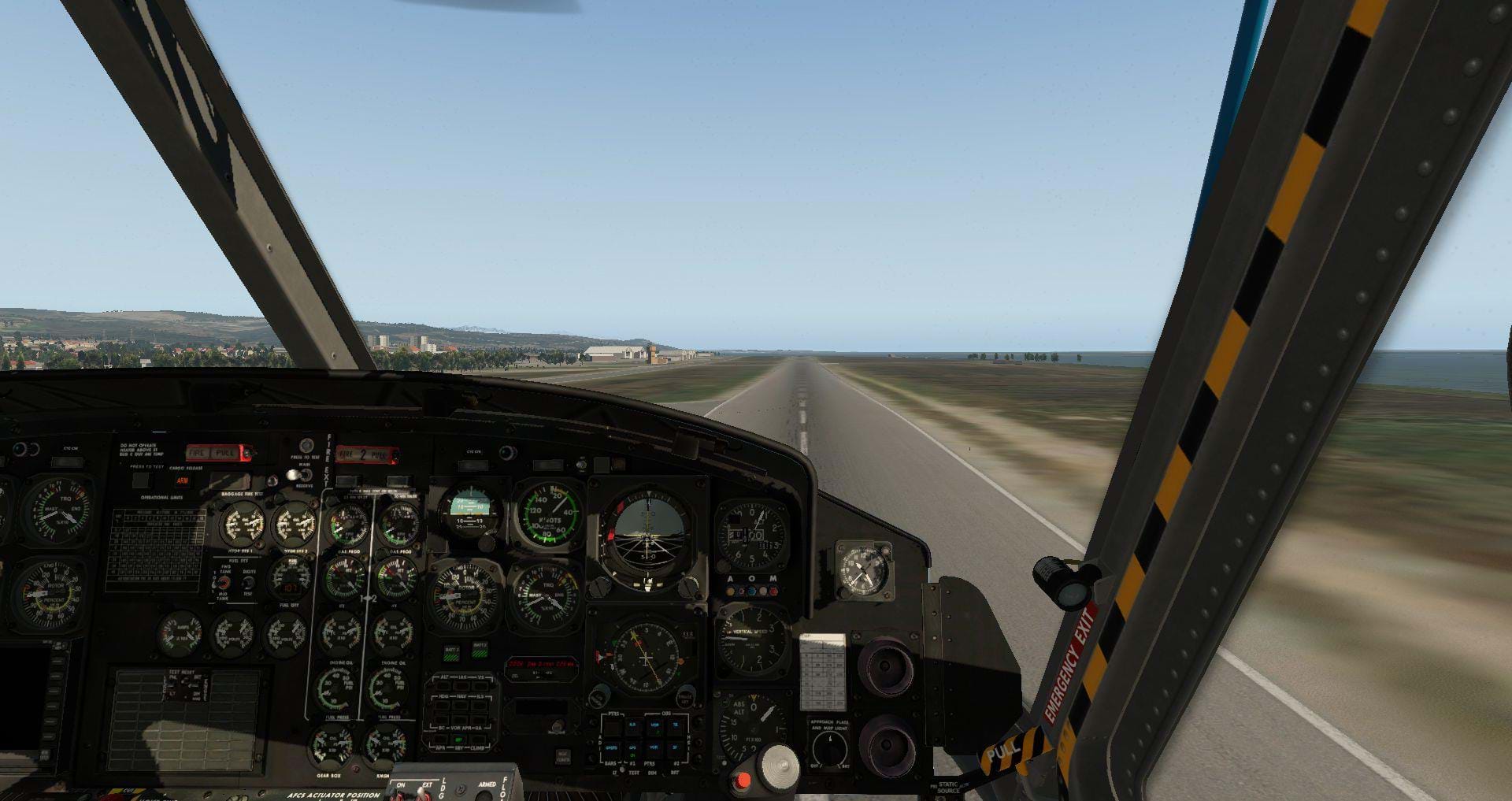 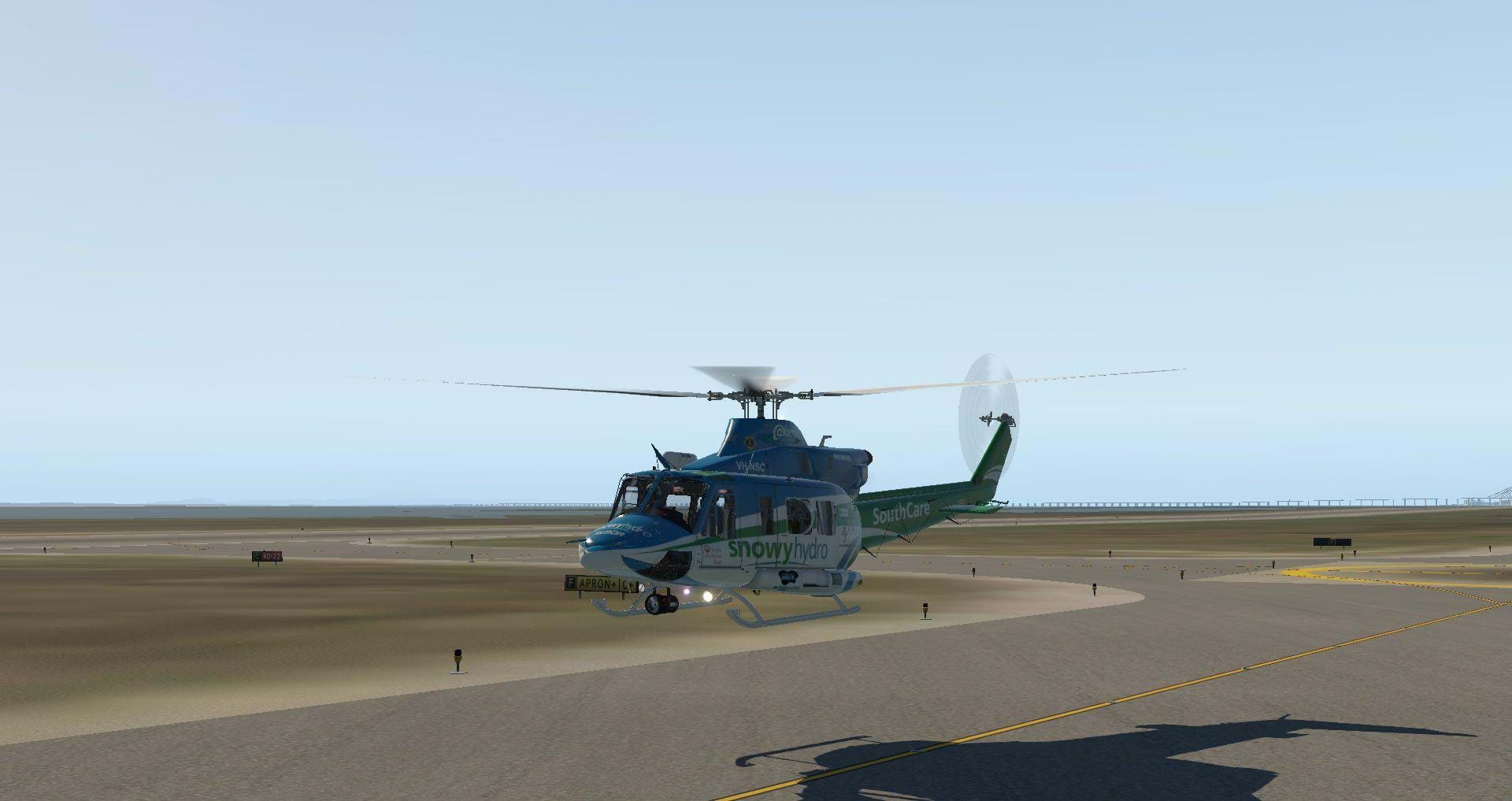 To finish a mission, simply land at the destination airport.

Mission Generator will provide you with a series of statistics about your flight: fuel burn, distance, points for the flight time, landing, etc.

The points I mentioned before (called experience just like in a role-playing game) can then be used to unlock things such as a higher number of short missions, helicopter missions, etc.

I have to be honest here: I am not a fan of this system. I shouldn’t have to unlock shorter flights, for example.

I would rather see this experience converted into the ability to unlock special missions or missions of an increased difficulty like having to land with crosswinds. Or not have these points exist at all. Again, it feels like a chore. Yes, I can still fly missions and yes, it does give some sense of progression but all I want to do is fly. 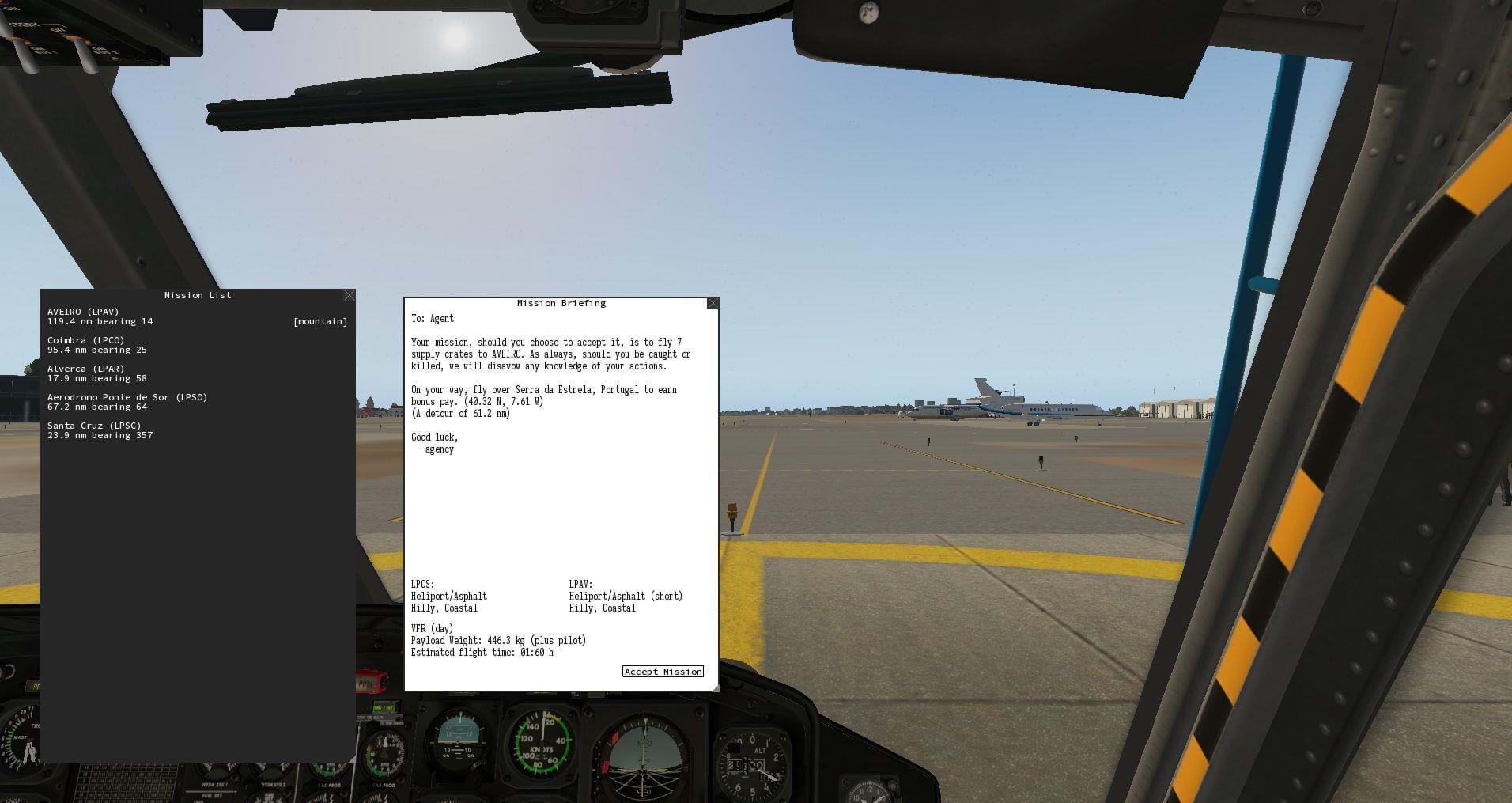 Mission Generator can also give you bonus points for fulfilling special requests such as flying over a region.

It’s not something mandatory but can add a bit more of fun and depth to your flight.

Mission Generator is a good product. The author had a terrific idea and I am very happy that he put his idea out there in the form of a plugin.

It’s been working well for me – with the exception of the mission re-generation thing – and it has been giving me some interesting flights.

But… I think there are a few things that could make it better.

There are a few things that I find a bit annoying or are small problems generated by the way developers sometimes build their products.

I wish we could have the ability to configure how far away we’d like to keep missions at. I would rather do shorter routes which, very often, are not available to me.

I also get missions that should not be possible to fly with the helicopter I am using since it either tells me to transport more people than it’s capable of or more cargo.

Having the ability to limit the number of passengers and cargo (per aircraft) would be a great addition and allow us to better control the types of missions we’d have.

It’s still a great plugin and one that I recommend getting.

Well, yeah! Bastian, the author of the plugin, responded in our comments section below.

You can scroll down but I am adding the juicy parts here:

The Mission Generator is built from simple text files. I built it specifically to be easy to modify. So if you want to change the length of short/medium/long missions, please take your favorite text editor, open the file "levels.lua", and change the "timeMin" and "timeMax" of "Short Flights", "Medium Flights", and "Long Flights" to your liking!

As for the number of passengers per plane, the second-to-latest version contained an unfortunate bug in the payload calculation. It should be a bit better in the current version, but X-Plane simply doesn't tell me the number of seats on a plane, so my estimates can never be perfect. It is my plan to introduce per-aircraft settings in the next update, though, which will allow you to limit the number of passengers, and set things like your desired cruise speed and a max runway length.

On the other hand, I strongly feel that the true beauty of the Mission Generator is that it prompts you to go to new places, and explore airports and scenery you wouldn't have thought of exploring on your own. In my own flying, the Mission Generator has lead me on a number of very unexpected adventures, which would never have happened if I had had free choice of where to go. Somehow, this limitation on just a few available destination seems to be the core that makes it fun, to me. Being able to re-roll your missions would destroy that.

Installation 10
Ease of use 10
Diversity 7
Re-playability 8
Entertainment 9
Simming enhancement 9
Total score
9
* The above final rating is calculated from a weighted average and not the direct arithmetic average. This means that some elements of the review will have a higher influence in the final score than others.
Click here to purchase/download or more information