Frank and Fabio released another region with some high mountains, good looking terrains and quite a lot to do with your helicopter. They even threw in a fictional airfield to add to the fun. 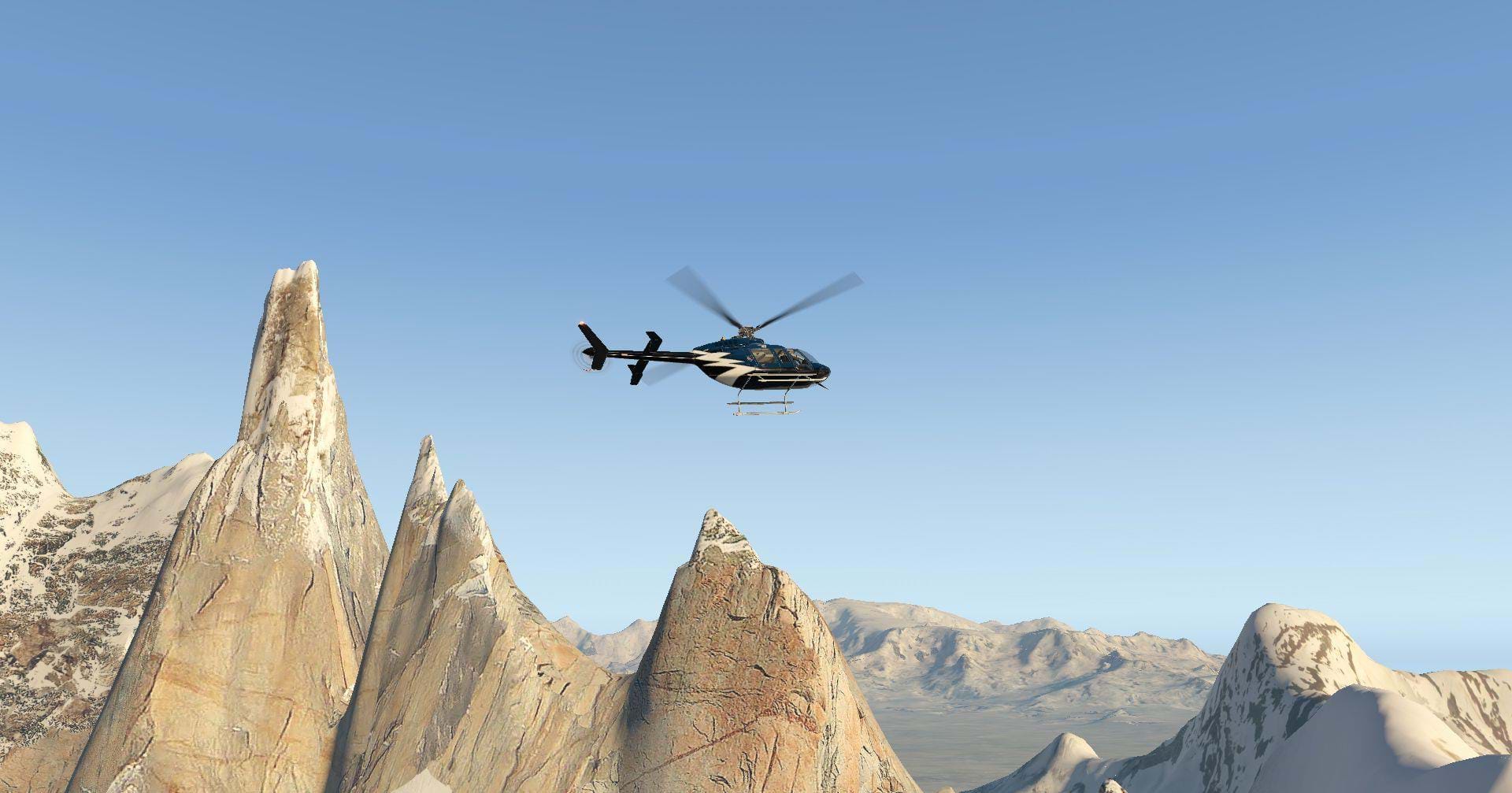 The Cerro Torre, a grand spire of granite nestled amongst a saw-tooth of four prominent mountains located along the Southern Patagonian icefield in between Chile and Argentina, South America. Nearby, neighboring mountains include the Torre Egger, Punta Herron, and Cerro Standhardt. The grand Cerro Torre extends 10,262 feet or 3,128 meters, into the lower hemisphere and is considered one of the most treacherous and hotly debated mountain climbs to dedicated Alpinists.

Located ten, twisty and descending miles to the East is the little town of El Chalten, serving as base camp and jumping off point for climbers that attempt to summit the peak. Also included by Frank and Fabio is the quaint little airport of El Chalten, a fictional but very believable landing site, as an easy means for simulator enthusiasts to travel from and explore the region.

After a quick and painless installation (simply dropping the appropriate files into the Custom Scenery folder and modifying the .ini file), I loaded into SACH in a Bell 407 and loaded up an imaginary group of sight-seers and enough fuel to explore the region.

All the local valley’s, beautiful alpine lakes and larger, Lago Viedma to the south, are all glacial fed and this is immediately evident as I lift off from the small helipad located at the north end of the airport and was met with large cliffs and embankments that were carved from the glacial ice some 11,700 years ago (if I’m a bit off, please excuse me, I’m not a Geologist by trade).

The airport itself lays between the town of El Chalten and Rio Des Las Vueltas, a river fed by the Patagonia Ice sheet. The runway is 31 and 13 and is 2,624 feet (800 meters) and sufficiently wide enough to land anything able to fit a climb profile in and out of the airport. 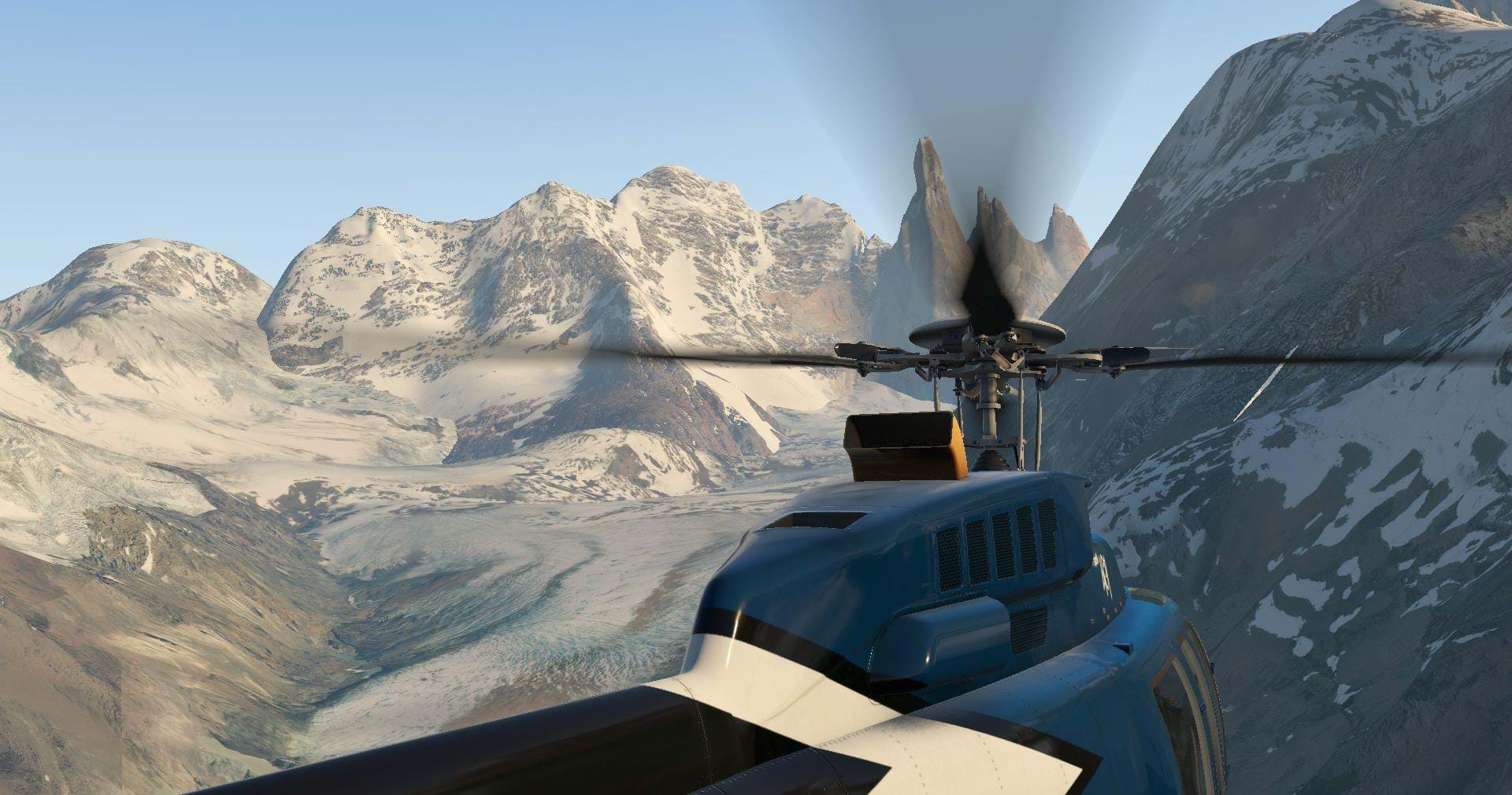 Its recommended when flying into and out of the airport to be sufficiently comfortable in making your approaches with a circling to land or with steep climb or decent rates as the nearby terrain make stabilized and straight-in approaches unadvisable.

Four parking spots and a lively group of ground guides and static equipment give the airport a fantastic feel! So much so, that I wouldn’t have thought the airport was fictional had I not done research on the region. One can feel very at home operating in and out of here for hikers or simply delivering supplies.

Just west of the El Chalten airport is the bustling little town of El Chalten itself. And from Google street view I can tell you the town if faithfully and beautifully reproduced in all of its charm and splendor. Given that not that long ago, the town only consisted of small shacks and a few important necessities catering to climbers, the fact that this little town is as populated as it is, is a small miracle.

Climbing out of El Chalten, several heliports are dotted around the landscape to serve tourists and climbers needs alike. One to the south is strategically placed at the top of the Rio Des Las Vueltas plateau, another just on the southern edge of town and yet, another again located at a base camp nestled at the foot of the mighty Cerro Torre itself.

After a short stop off at the mountain base camp (and trying not to blow many tents over on approach), I circled back around and headed back to town. Given that I try to leave real weather on, it wasn’t optimal on Saturday for my excursion. As luck would have it, early on Sunday, the weather cleared some and I was able to head up and finally get a closer look at the Granite spire stretching majestically in the western sky. 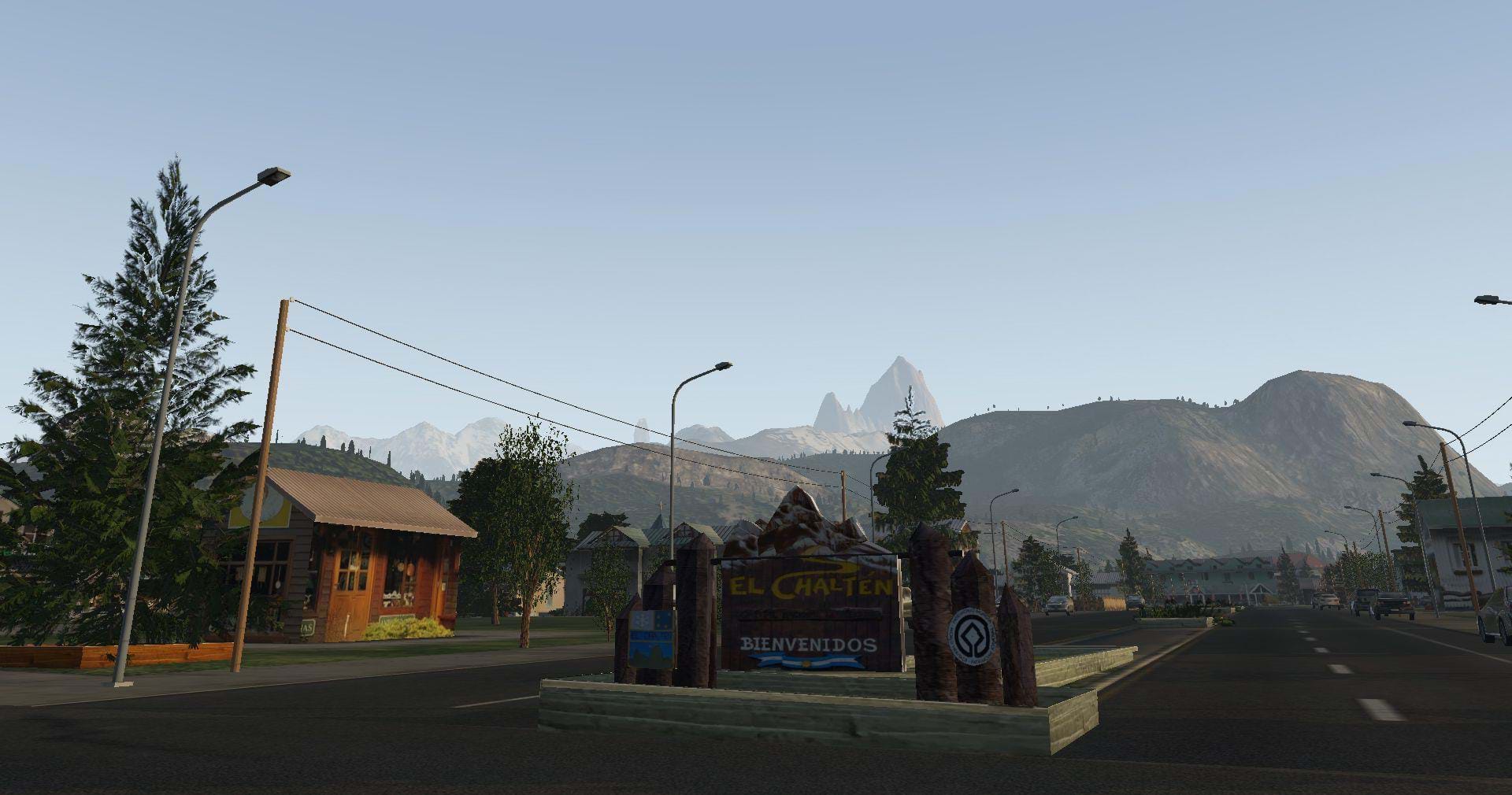 Immediately off SACH, I circled south, around town and started the climb. Pulling collective up to 85% torque and watching my NG and TOT, I climbed steadily up to 11,000 feet where I would be able to get a full and up-close look of this imposing and grand mountain. Circling from the east and heading north, I caught my first glimpse of the expansive ice field off the west and high mountains for which most of the treacherous weather in the region is born from.

Continuing my slow circle, I could feel the strong artic wind buffet the helicopter at 11,000 feet and the frigid outside temperature of -10C leaked through the door frames. But beneath me, the view was breath-taking. Sculpted pillars of granite rose from high escarpments of sedimentary rock. Even from my lofty altitude, the climb looked grueling and demanding.

Ice and snow stuck steadfastly to the chiseled slopes that rose majestically for thousands of feet. Deep moraines of rock and ice nestled deep between the mountain ridges which, a few short minutes earlier, I had carefully navigated to circle to the west. 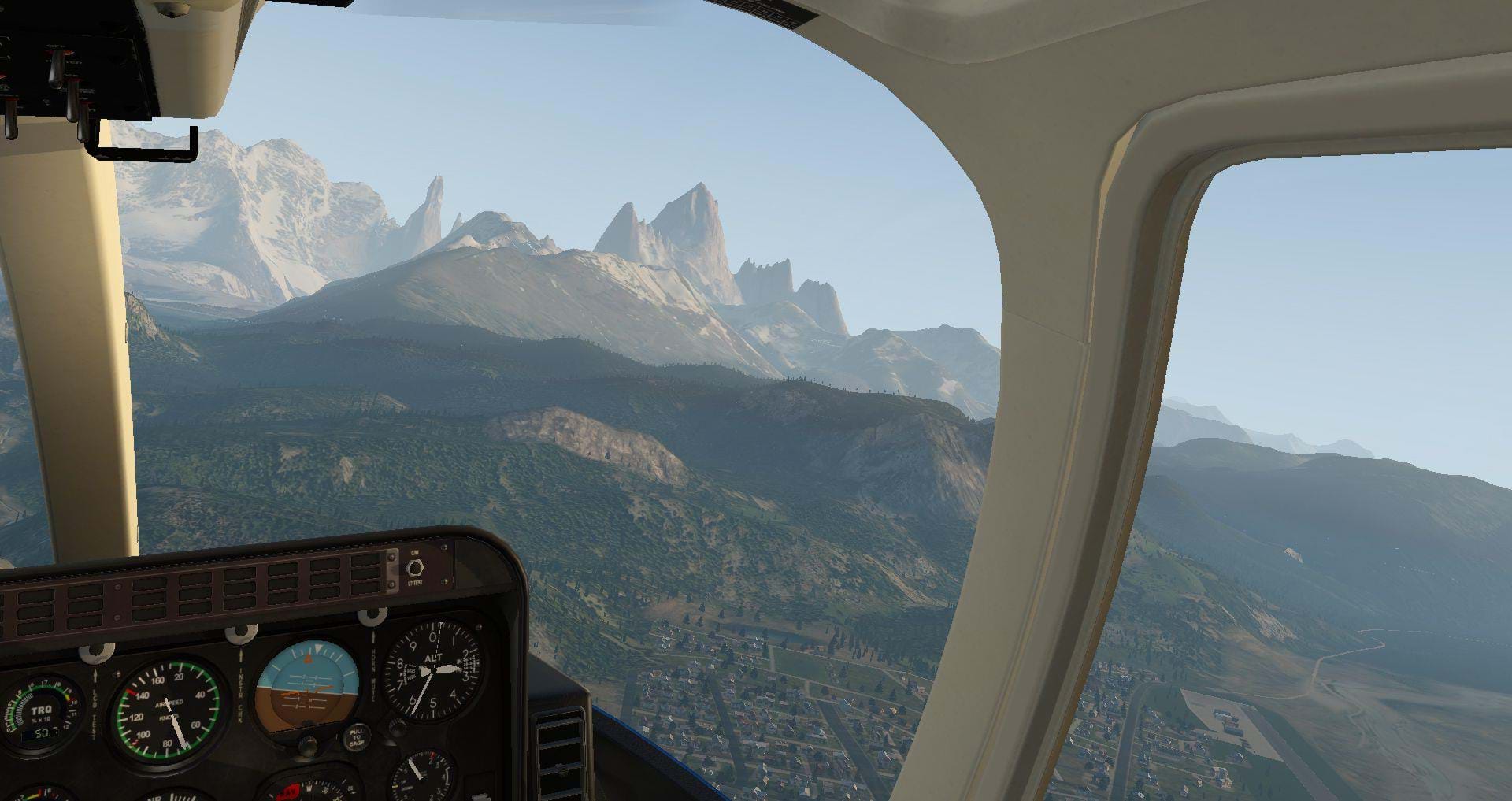 After some careful consideration and analysis of Cerro Torre itself, I initiated an approach and carefully piloted the 407 to the imposingly small cliff face. My skid touched down gently and with no lack of difficulty on the snowy summit and I sat there for a few short minutes with two climbers, enjoying the breath-taking view before I pulled the helicopter off the precipice and headed back to base camp.

Flying in mountains is always a marvelous experience. I was fortunate enough to have my first helicopter ride at Glacier National Park located in the United States and since then, mountain flying has been my favorite time to be in an aircraft. Not much else can compare to the challenge and skill required to fly safely and successfully in such unforgiving and unpredictable terrain.

There also isn’t any other form of flying that can be as humbling and awe-inspiring. Fabio and Frank have done a fantastic job of bringing one of the greatest mountain ranges within reach of home simulator enthusiasts and have taken their usual fastidious attention to detail and skillful application of art and reality to create a fun and immersive environment to enjoy. 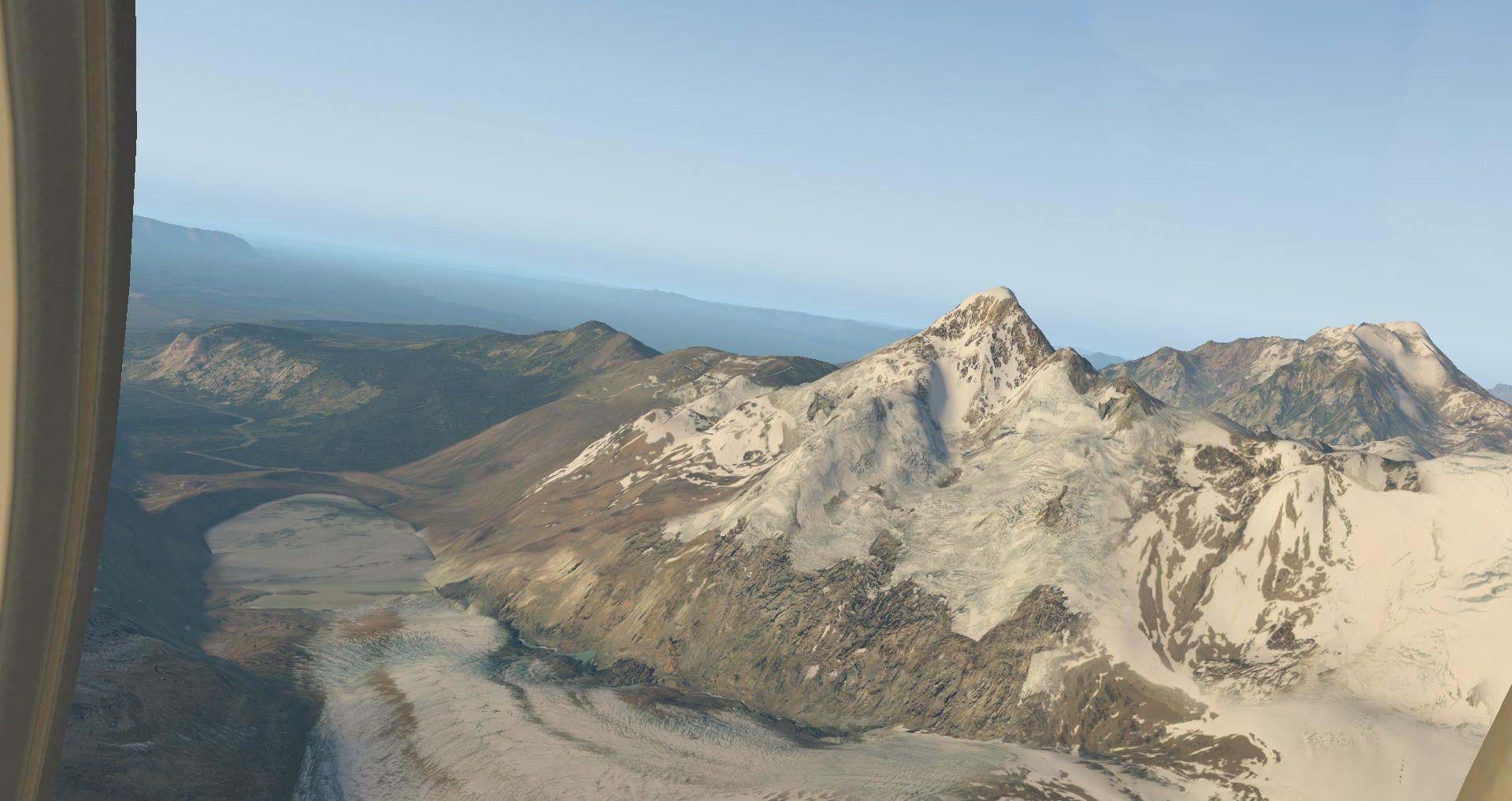 I couldn’t see much in the way of problems with the scenery. Some of the textures were not as crisp as I’ve seen in their other sceneries and from certain perspectives, the overlapping textures can create “ridges” through the scenery when viewed at longer distances even at higher resolutions.

FPS was consistent at 45 FPS and never dropped lower than 40 even in the mountains or around town. Despite these few small issues, it rarely created a glaring continuity issue and the region was still delightful and amazing to fly around.

Cerro Torre is a fantastic, well-executed scenery that lends some fun and challenging flying to any helicopter pilot. The area is exciting and beautiful to fly around and would make a great scenery addition to the pilot that wants to add more adventurous mountain flying to their simulated resume.

Installation 10
Mesh 10
Textures 9
Buildings 10
Frame rate impact 10
Total score
9.8
* The above final rating is calculated from a weighted average and not the direct arithmetic average. This means that some elements of the review will have a higher influence in the final score than others.
Click here to purchase/download or more information 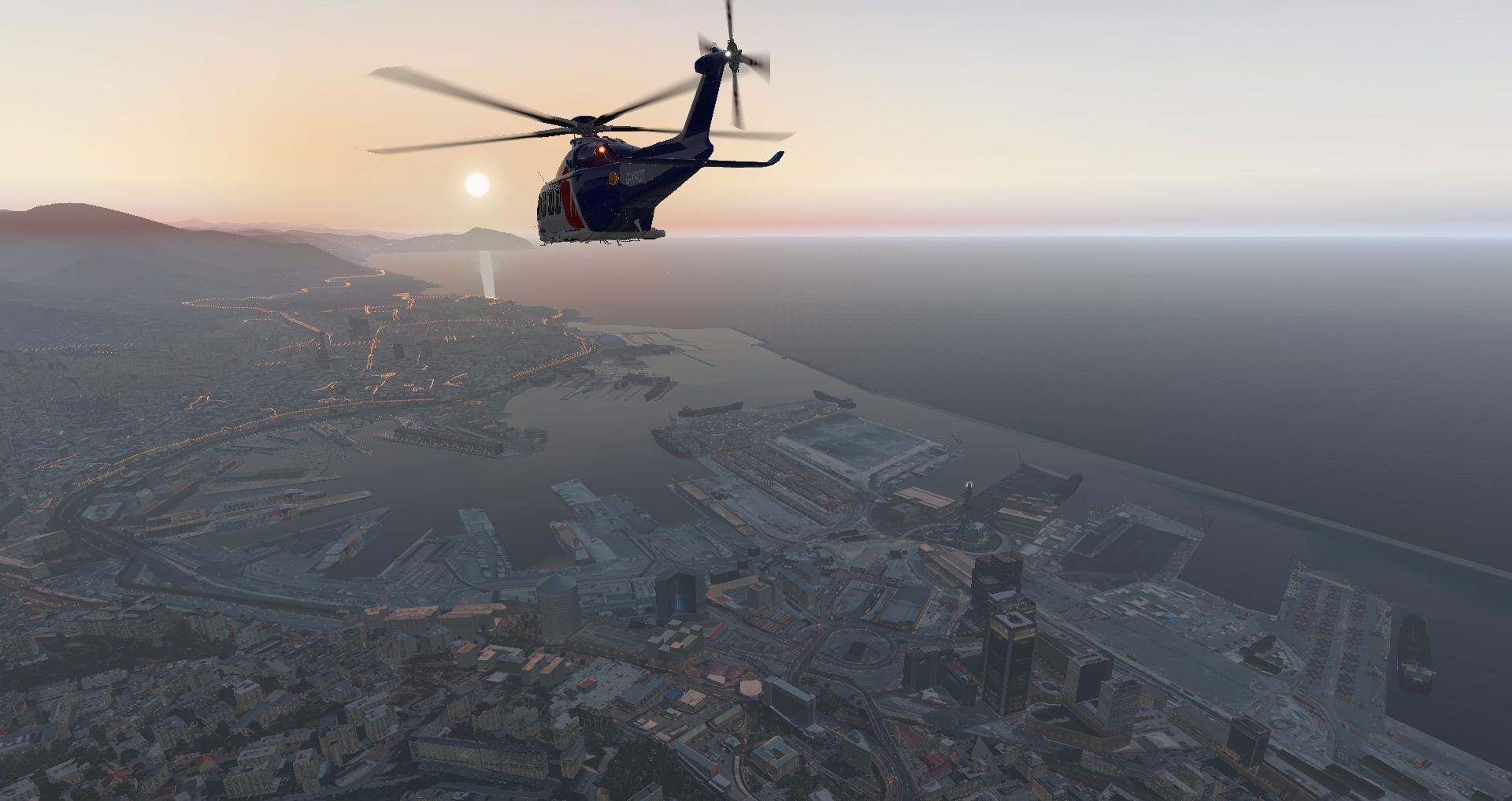