Aerofly FS2 is not exactly a sim where a lot happens but the last weeks has brought us a new helicopter and a new scenery (both from third-party developers). As we are still getting used to the Lynx, we decided to take a look at the city of lights. 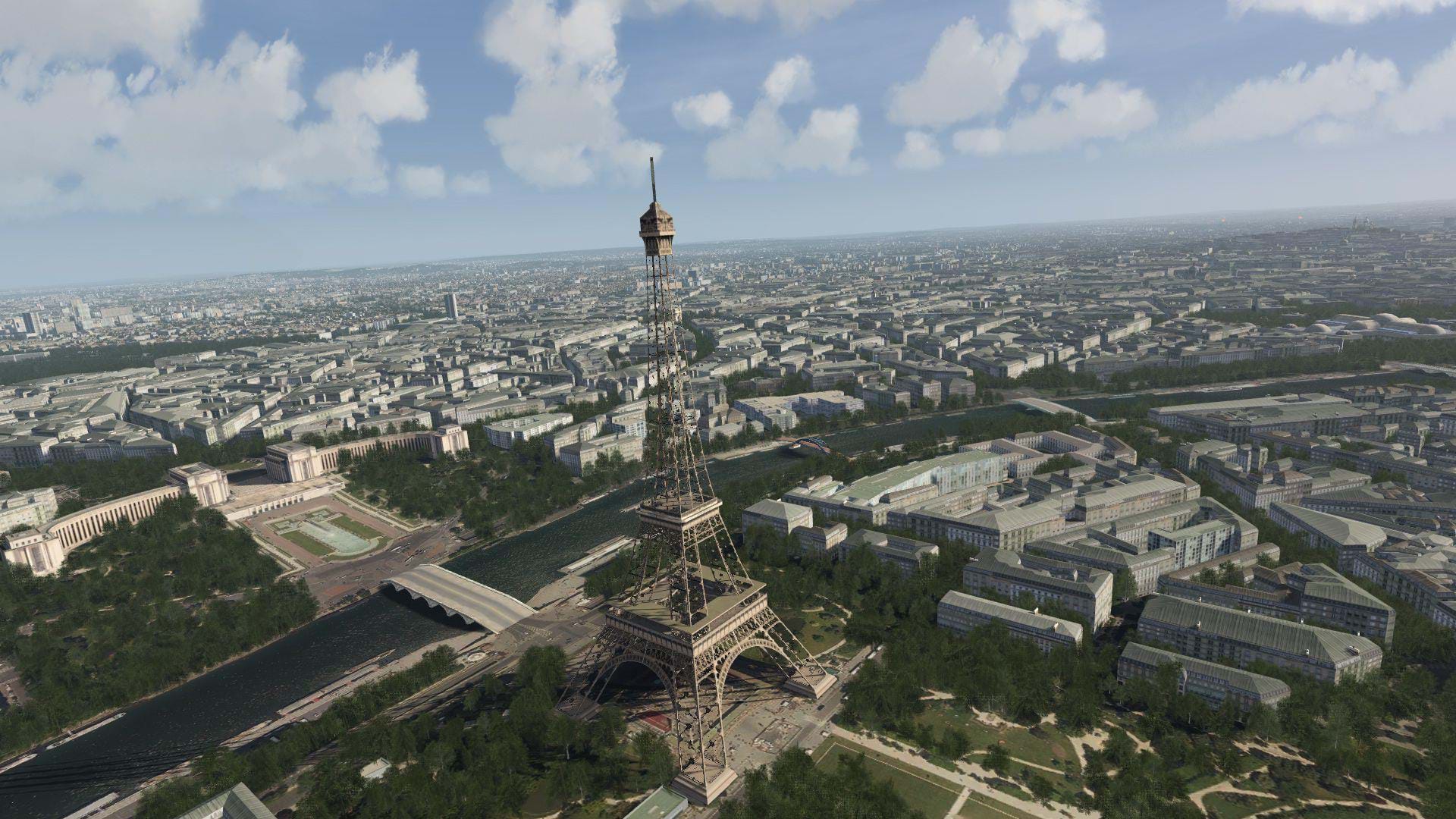 I know, I know… The Lynx was out first . You are 100% correct. But, honestly, I haven’t had enough time to spend with it. Not as much as I like to when reviewing aircraft, anyway.

Scenery, on the other hand, ends up being easier. I don’t need to cover as much areas as an aircraft and I don’t need to learn the systems and try to understand the subtleties of the flight dynamics. I just fly around and enjoy myself.

And that’s what I did.

The city of Paris

Do I really need to tell you about Paris? Not just the city but also the surrounding areas, which this scenery covers. But, let’s face it, we want to see the city.

Now, while most of the scenery I review I have only visited virtually (through sims or Google Maps, for example – to realize how the region looks like in real-life, I am lucky enough to have visited this city twice. I haven’t traveled throughout the whole city, of course, but I have covered some of the main areas. 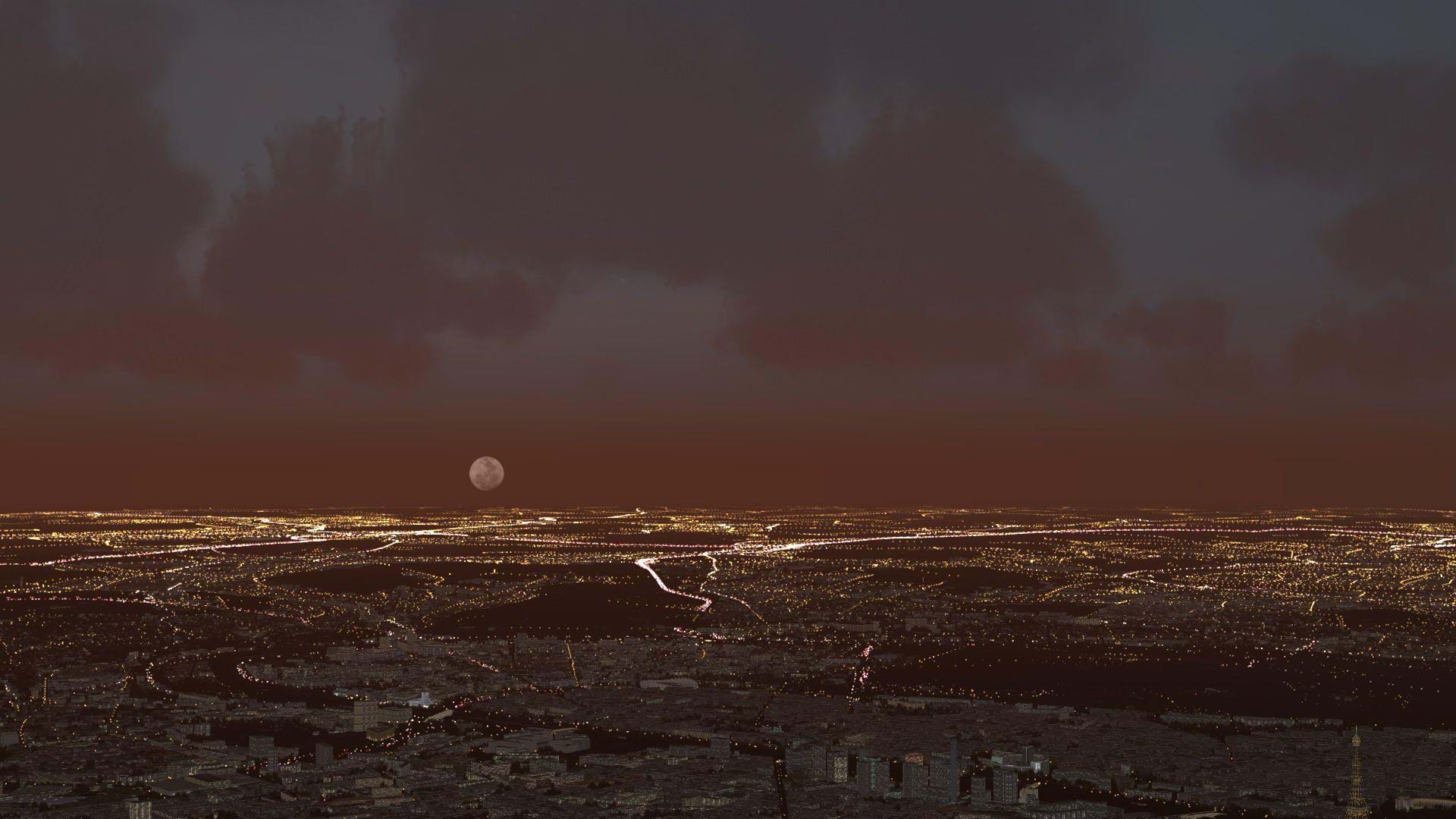 If you haven’t visited Paris, you should. The first time I went there, it was on a business trip and I have never, realistically, considered visiting the city before. I thought it might be over-hyped, so I never really had this goal.

But I am glad I did. It’s a truly beautiful city. The architecture is terrific. The city layout is complex and very interesting. There’s a lot of history around every corner. It’s just… An amazing city. I only spent a couple of days there, but I was seriously impressed.

So much that I had to return with my family. I fell in love. Paris won me over.

Because of that sudden passion for Paris, I got obviously excited to try it on yet another sim. I had already visited virtual Paris in the past by the hand of France VFR , so I wanted to jump at the chance to take a look at it in Aerofly FS2.

So, how does it look?

Well let’s start by taking a look at the covered area and features. 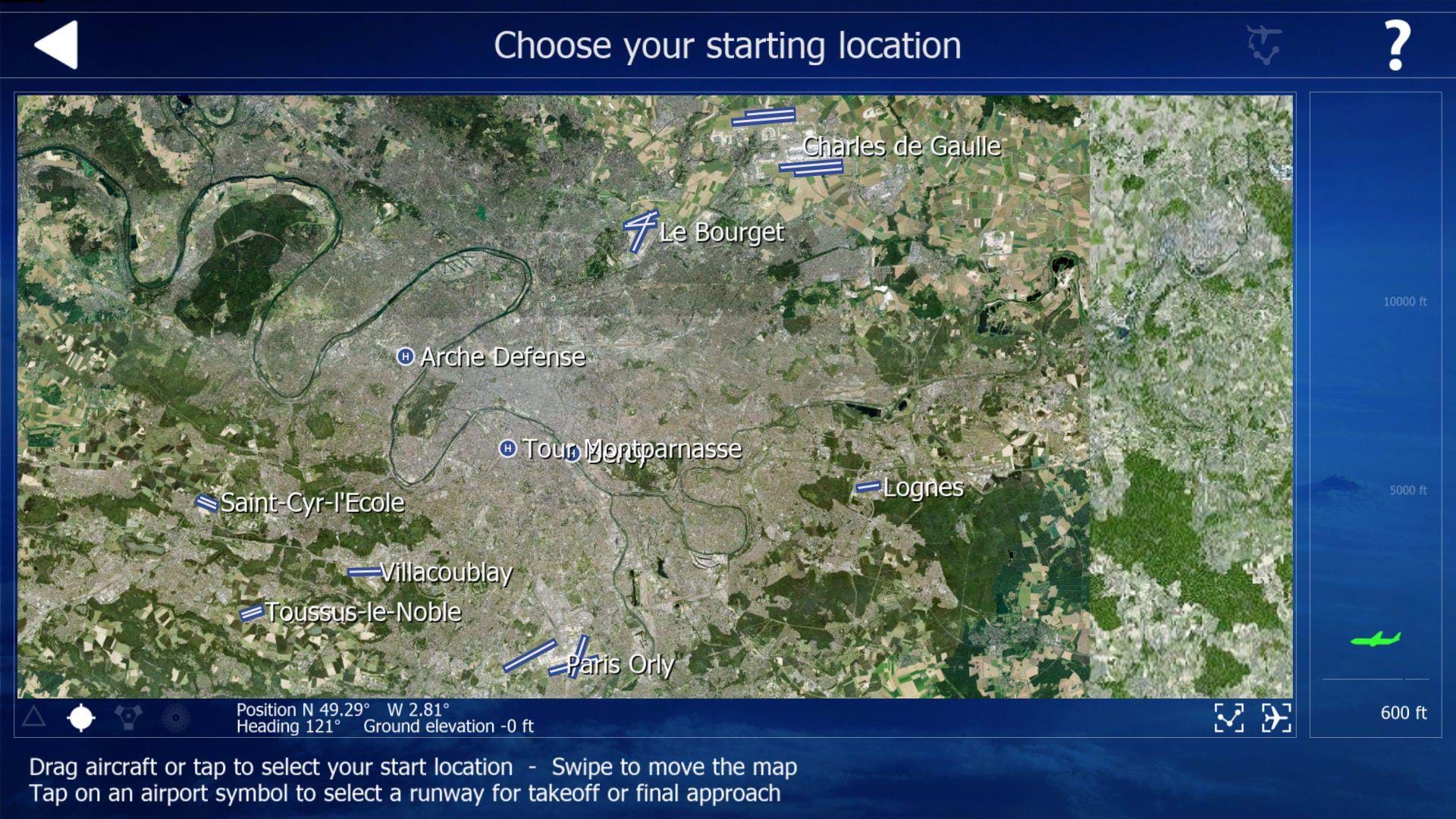 France VFR has really gone all-out on this scenery and they didn’t let anything to chance, it seems. The whole city of Paris, which is, obviously, the centerpiece of the scenery, is covered in high detail with a ton of buildings, but the team has also covered quite an area around it, with some extended (and less detailed) zone further out. 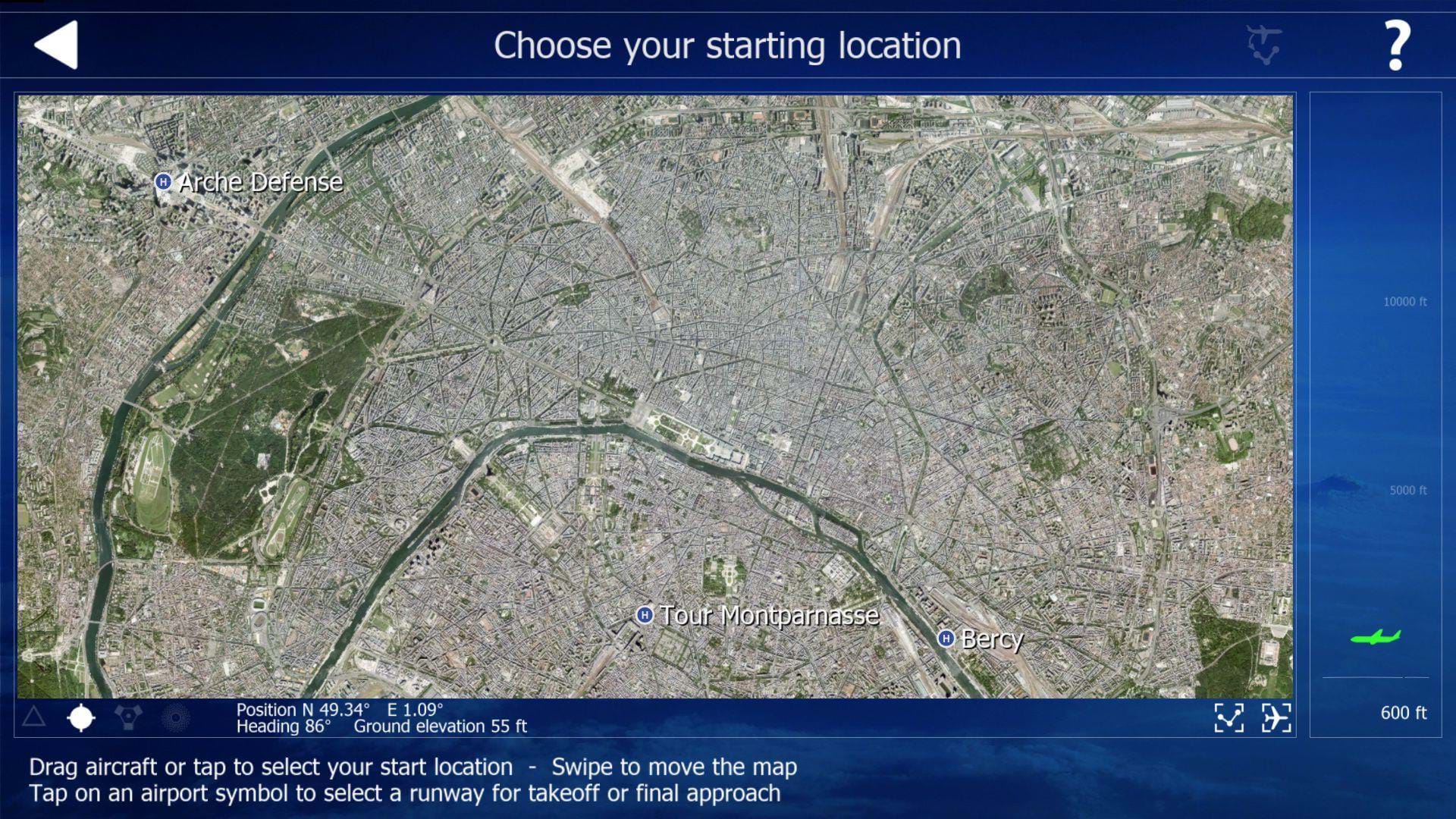 Zooming into the scenery in Aerofly FS2, we can find 7 airports and airfields. Charles de Gaulle, Le Bourget, Paris Orly and others are there in full glory. And we’ll find 3 helipads as well, all inside the city of Paris.

The first flight I’ve done was from one of those helipads (Bercy, which seems to server the Finance Ministry). Being a geographical plain city (no major mountains or hills) means we can look around and identify tall landmarks at a distance. 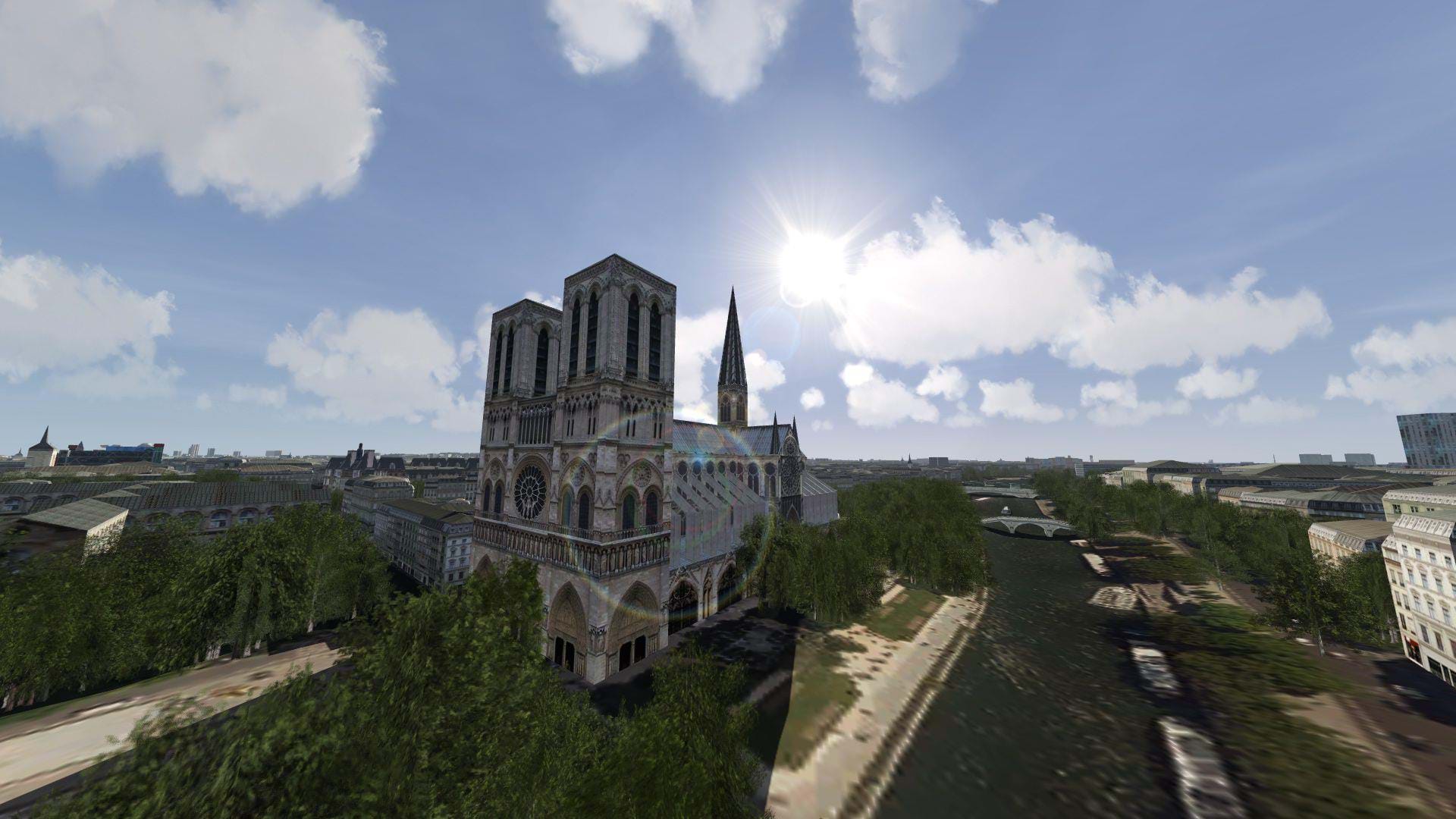 I took a look at the surrounding structures and streets and I had the same feeling as I did when I visited the city. The narrow, crooked streets, the small buildings (3-4 floors) and the streets filled with trees, it’s all there. I was transported back to Paris, in this virtual world. 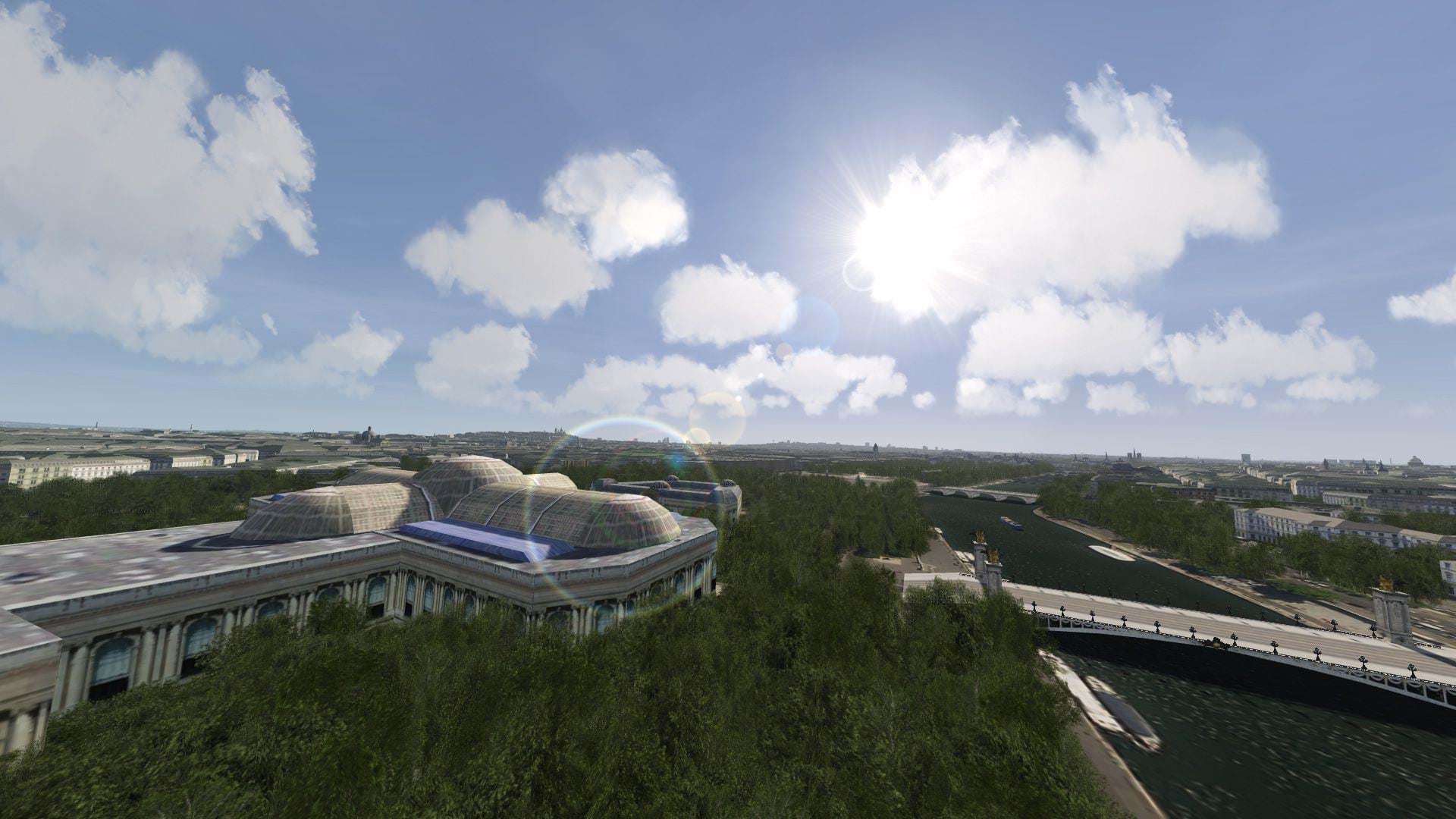 As I turned to the right (after flying around the helipad area), I glanced at the horizon and saw the Eiffel Tower. Well, duh, we gotta check it out, right?

Instead of flying straight to the tower, I decided to follow the Seine river, which crosses the city and passes right next to the Eiffel Tower.

From there, I flew over the Champ de Mars, came back to the Seine and visited the Statue of Liberty (yes’ there one in Paris, France) and decided to visit some other areas. 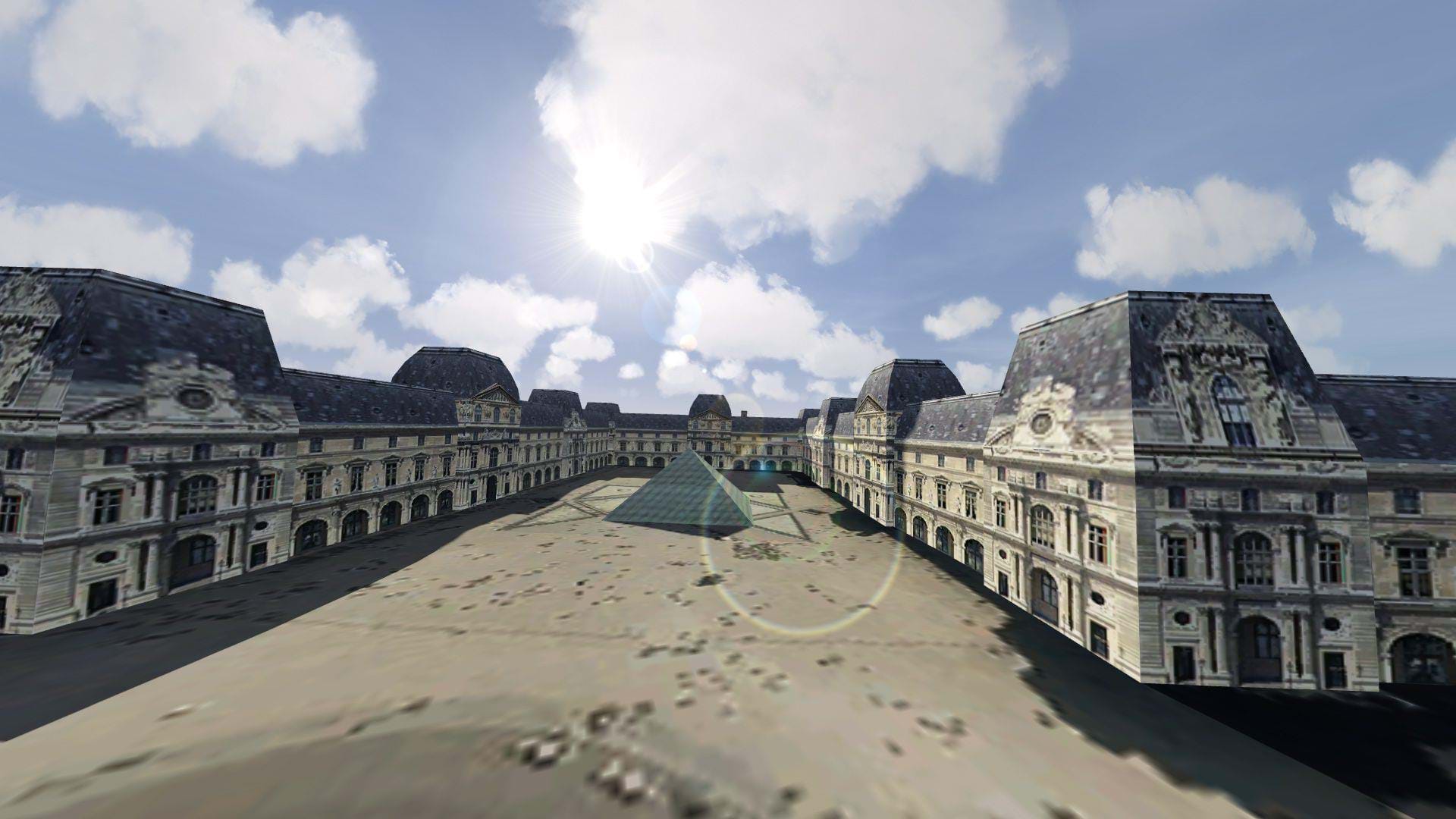 The other obvious places are also there, and you should find them around. I have been having a real blast flying around the city and getting reacquainted with it.

And so, I did. As I flew over the Seine, I passed through the Notre-Dame cathedral, the Louvre and I quickly arrived at the tower. 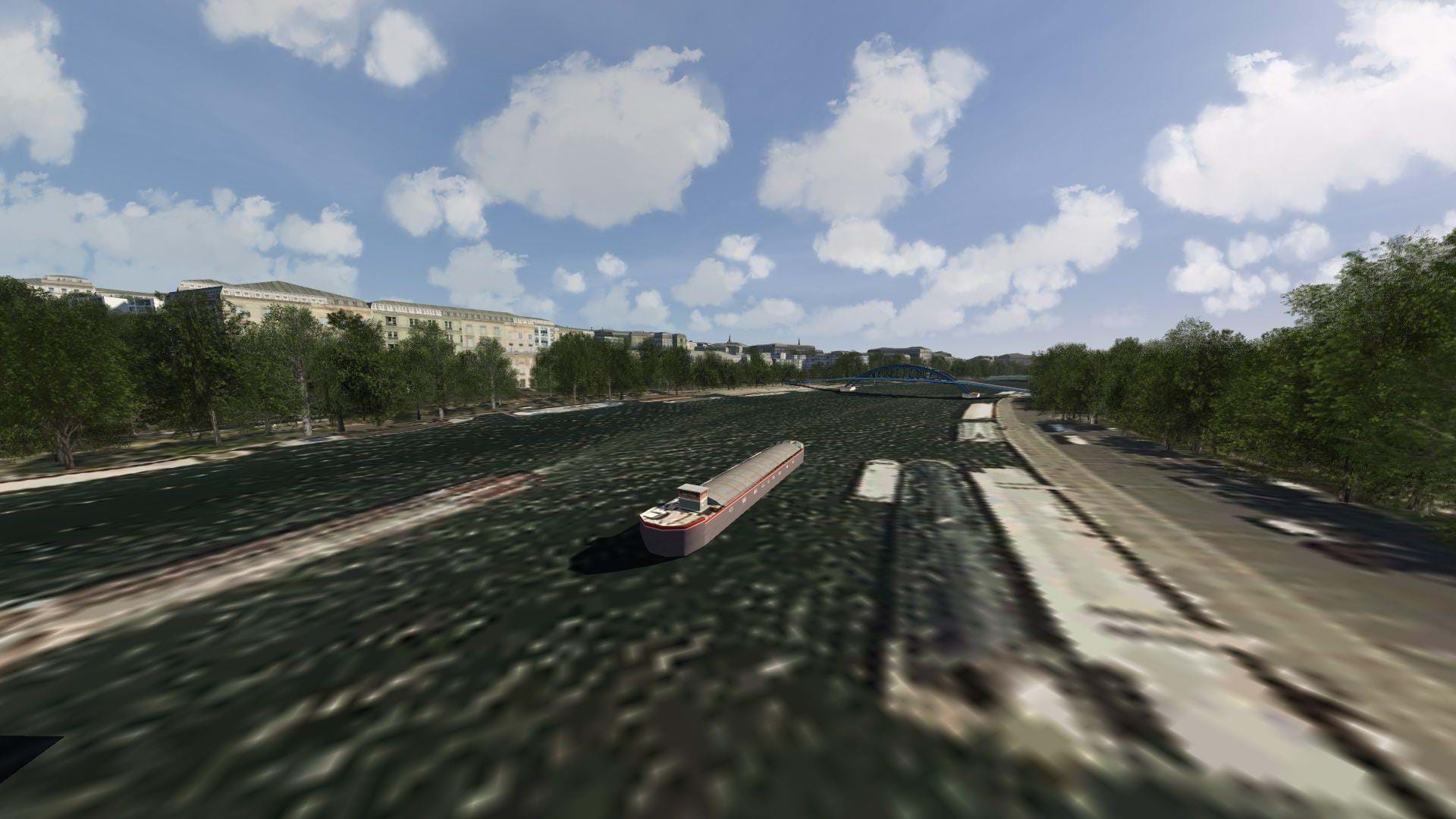 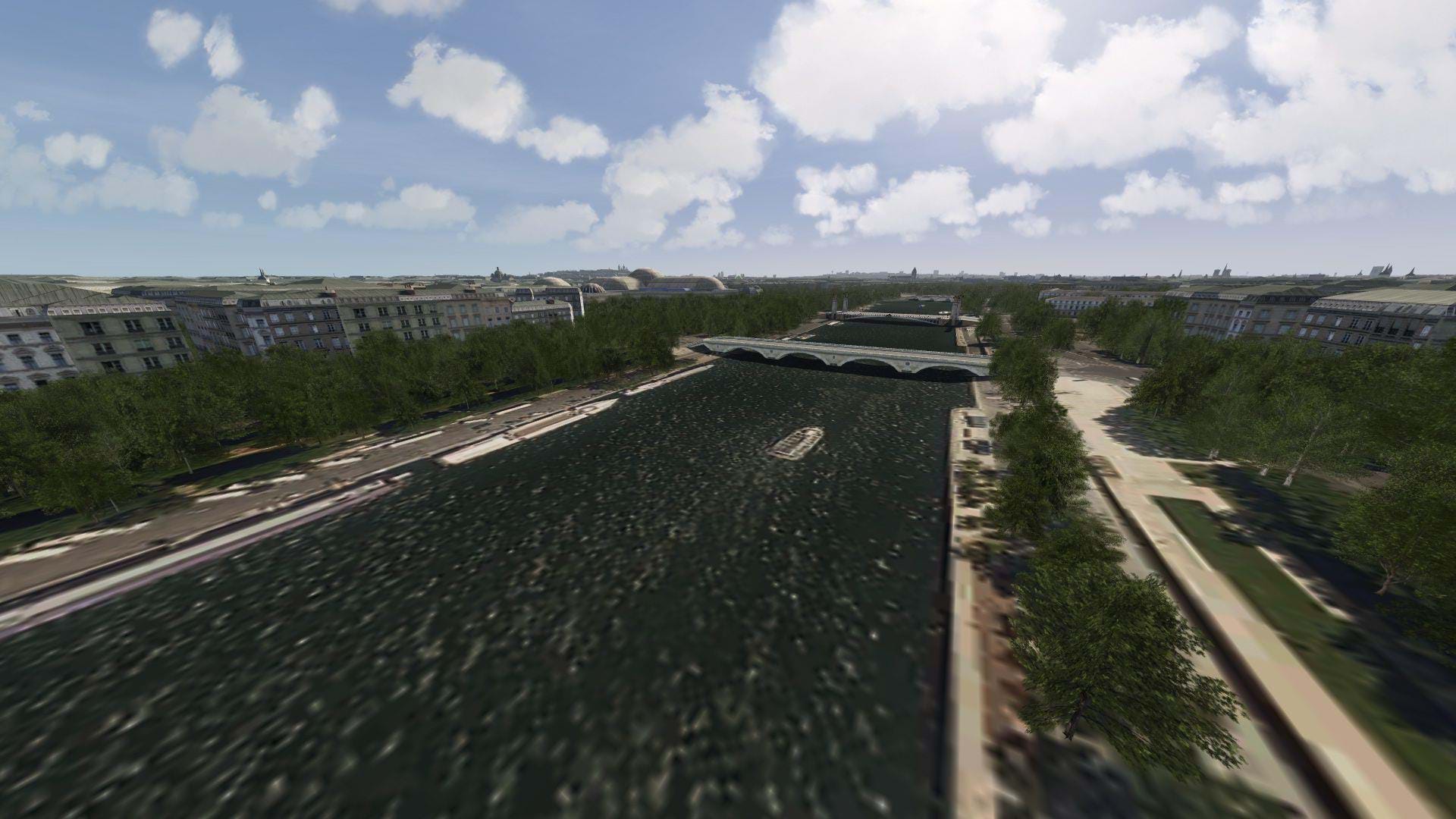 Looking down, I could see some boats, which France VFR hand placed. They are static objects, obviously and they are not only in the middle of the river but also on the banks. What I didn’t like to see, though, were the boats that are part of the texture of the river. I would prefer for France VFR to have removed them, instead.

It’s not a deal-breaker but it sort of taints a work that is quite interesting and well done in general.

What I miss (really, really miss)

France VFR did a wonderful job and they even added some small details by placing the (static) boats on the Seine, which adds to the immersion of the city. 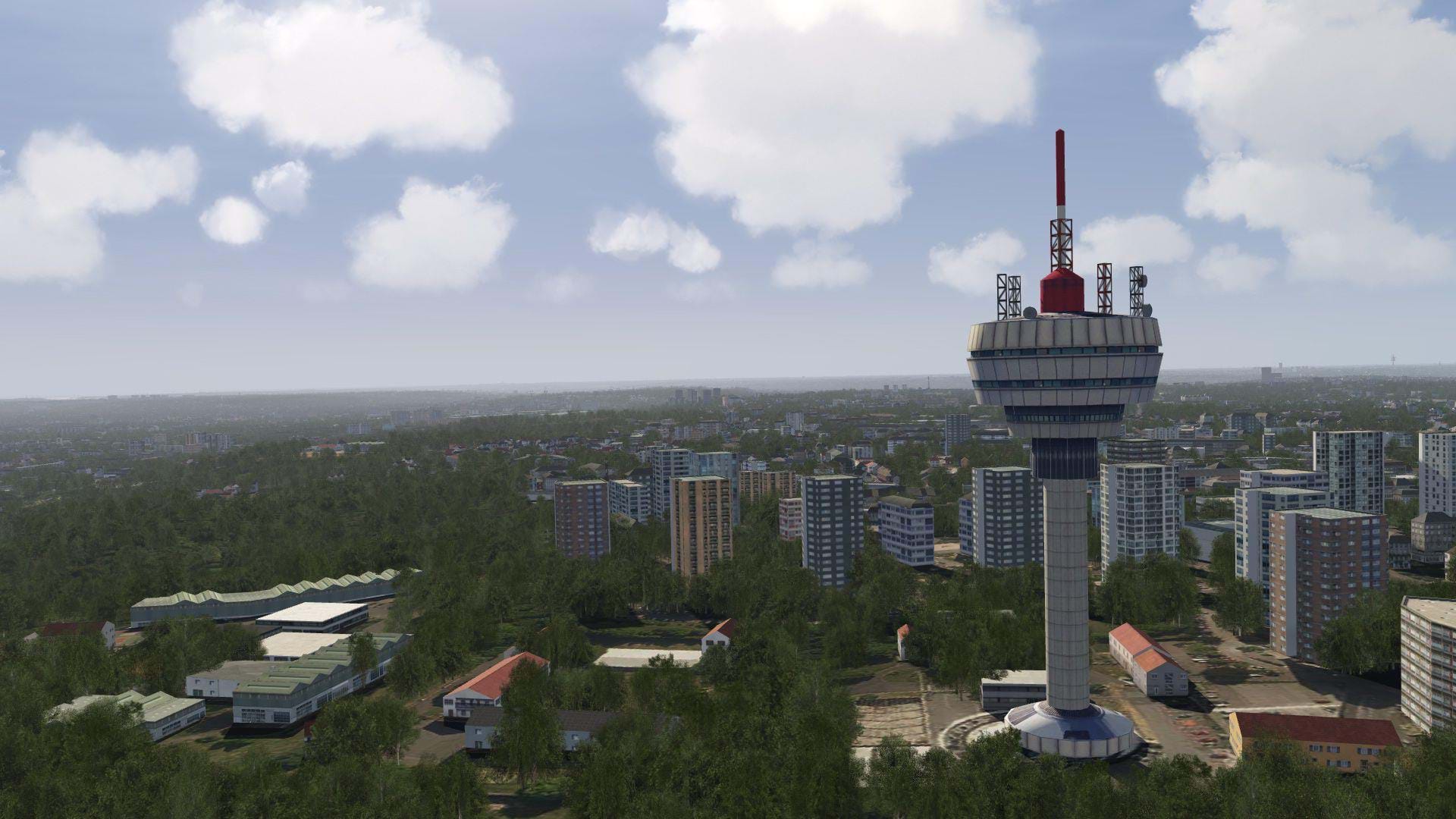 Still… It all feels fake. Sterile. Aerofly FS2, as much as is a good sim, with a remarkable helicopter flight dynamic, nice graphics quality and tremendous performance, the world feels completely abandoned. There’s no road traffic, the water is still texture-based (not real water and it’s static).

I am enjoying France VFR’s Paris – Ile de France quite a lot. It’s a great scenery which I can enjoy in VR with great performance and a great helicopter.

My only concern with the scenery itself is the beforementioned texture work of the Seine, with the boats in it. Other than that, France VFR did a tremendous job. I have been spending some time in Aerofly FS2 and the scenery and I cannot but recommend it.

Installation 10
Mesh 10
Buildings 9
Textures 8
Frame rate impact 10
Total score
9.7
* The above final rating is calculated from a weighted average and not the direct arithmetic average. This means that some elements of the review will have a higher influence in the final score than others.
Click here to purchase/download or more information