Looking for something extra to do with your DCS Huey? Here's a suggestion: the DCS campaign "Argo" puts you in the place of an Helenic Huey pilot.

DCS is a very flexible, and fun platform for flight simulation. Even though the flying area is limited compared to other flight simulators, the Mission editor and multi player functions make it difficult for one to get bored. The UH-1H has been a work horse for DCS, but one thing it lacked was a good Champagne. The included UN campaign was ok, but there was nothing else after it. While other DCS Modules enjoyed the creation of story driven campaigns, the typical UH-1H module user was left with the condescending Captain Bonito as their only company for a campaign series of missions. While there are many missions created by fellow users of DCS available for download in the userfiles section of the Eagle Dynamics website,

Argo is a 15 mission campaign that is centered on a Hellenic Navy UH-1H pilot operating from a navy frigate. 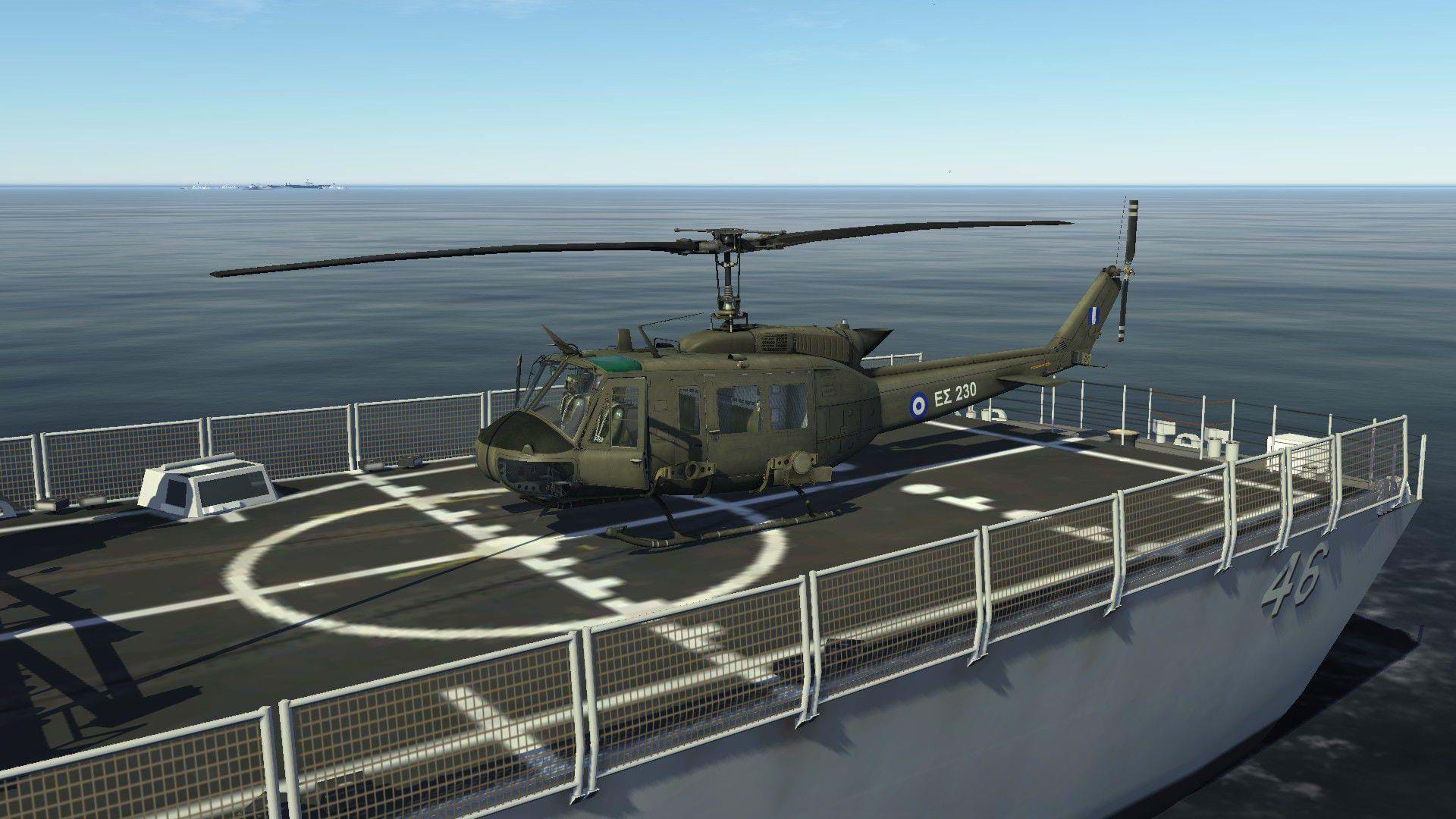 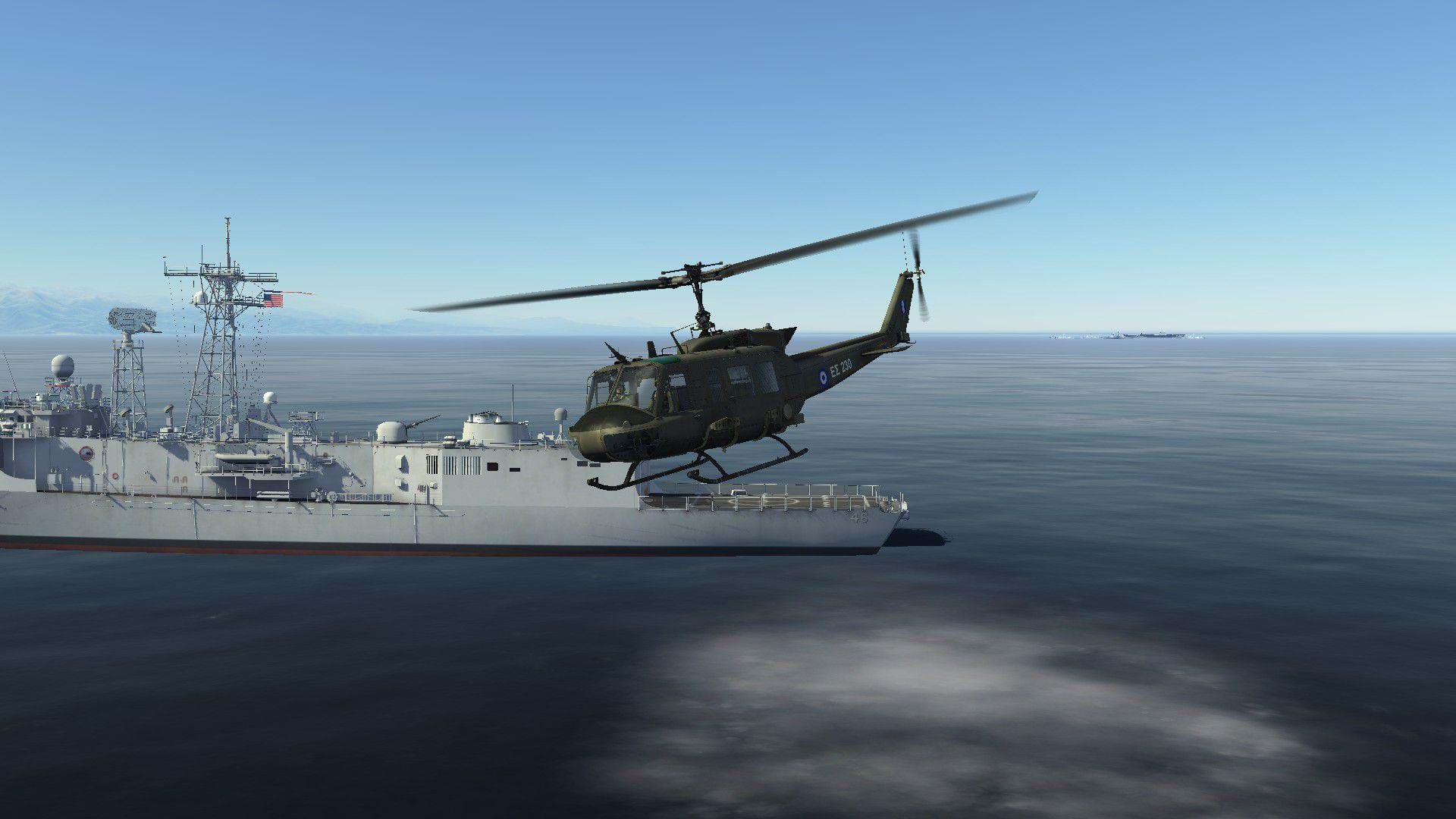 Argo is a bit more interesting than the UN campaign. In that it makes an effort to combine multiple mission sets into one mission. It is not uncommon to perform a sling load transport, and ground attack using the UH-1H’s offensive weapons in one mission. 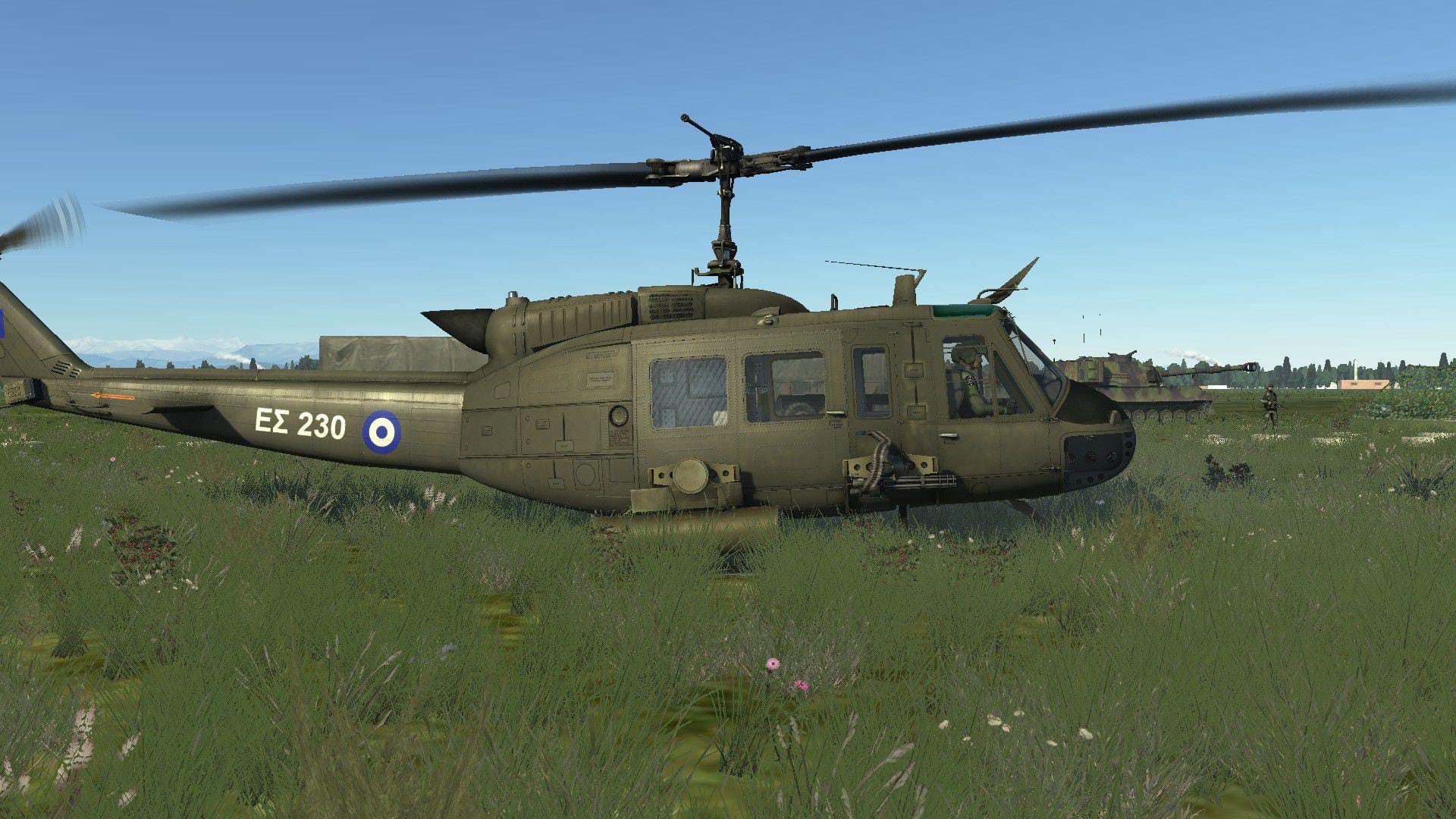 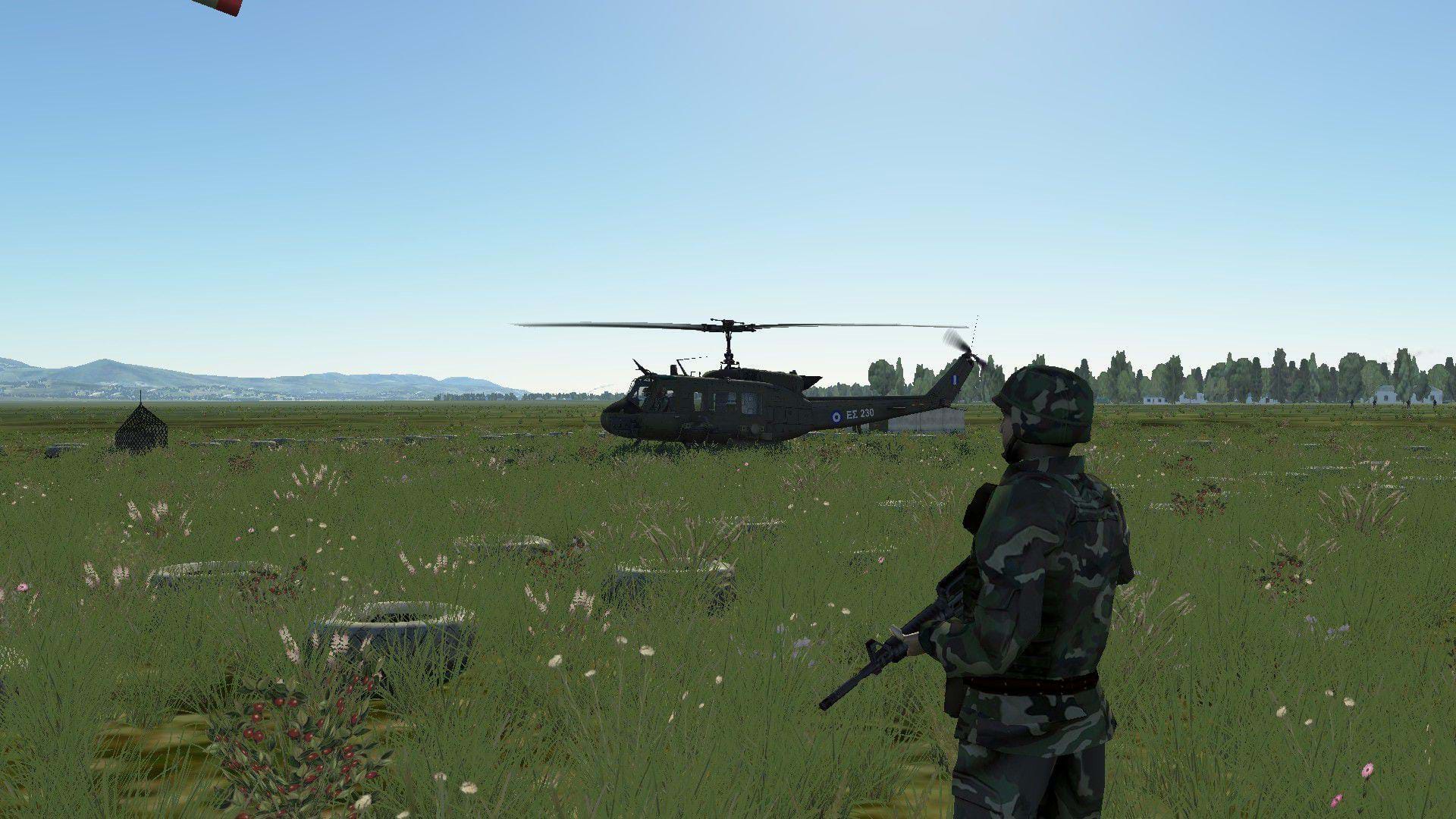 Other missions you can expect to perform are anti-submarine warfare, and search and rescue. 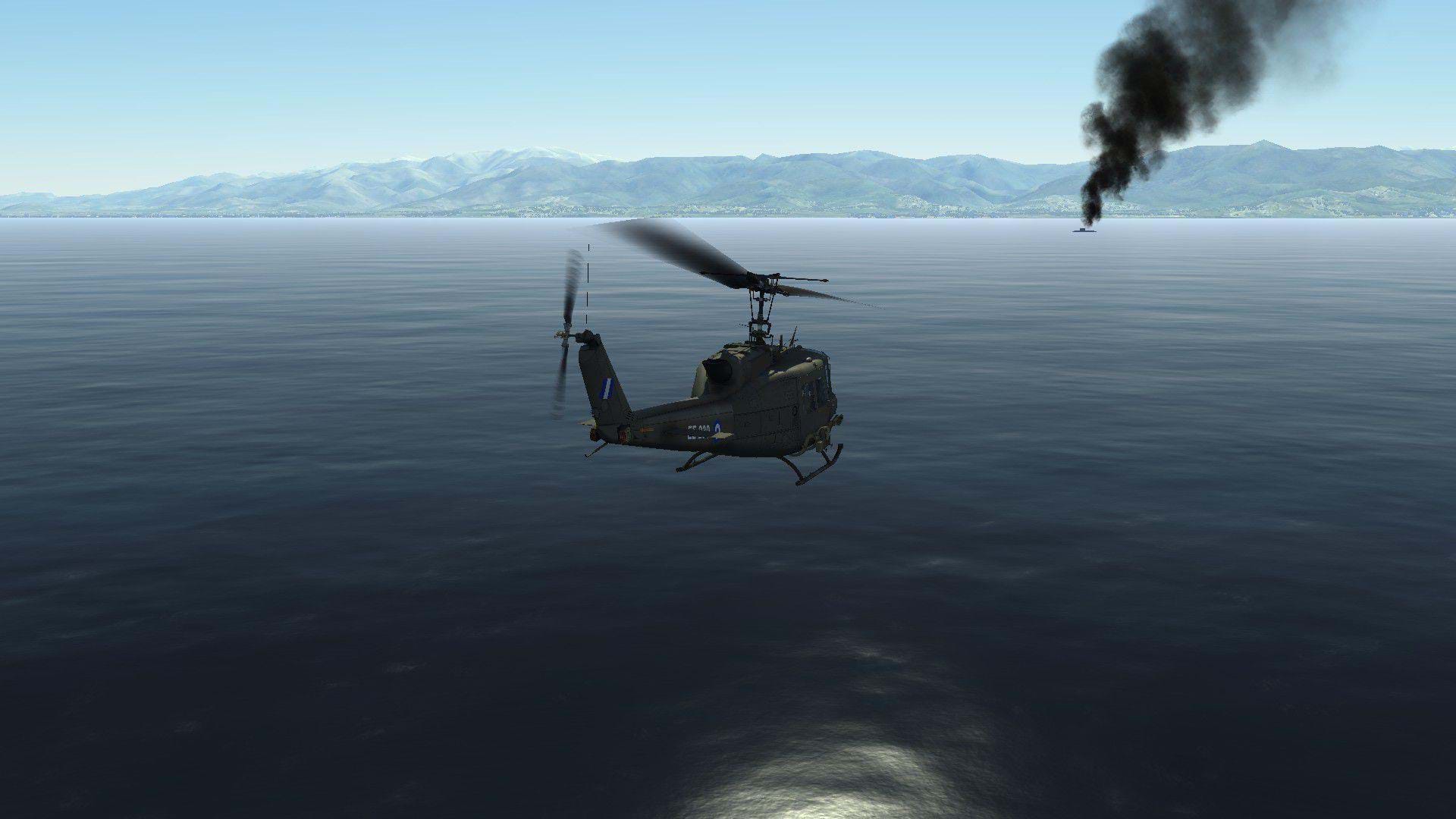 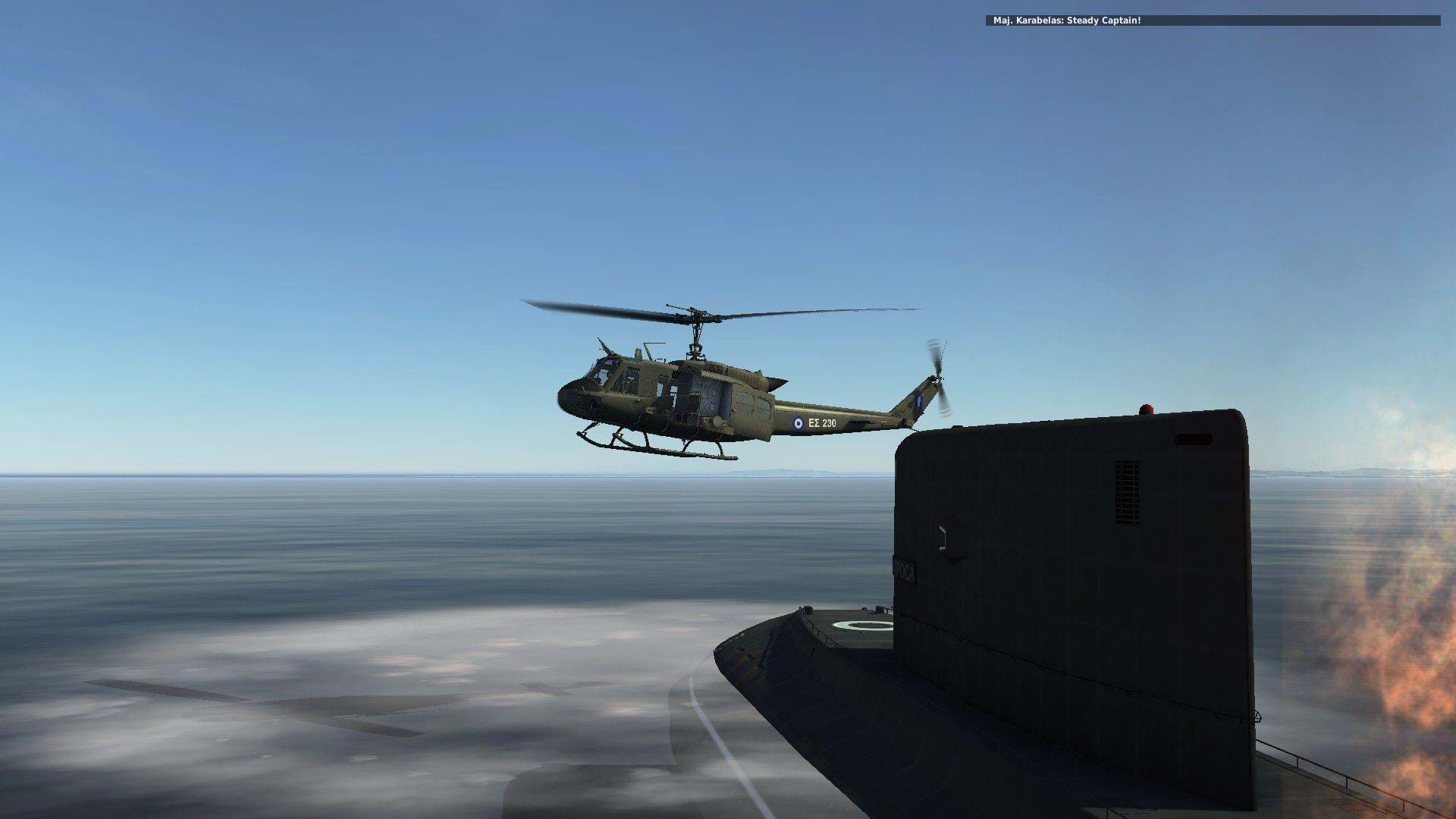 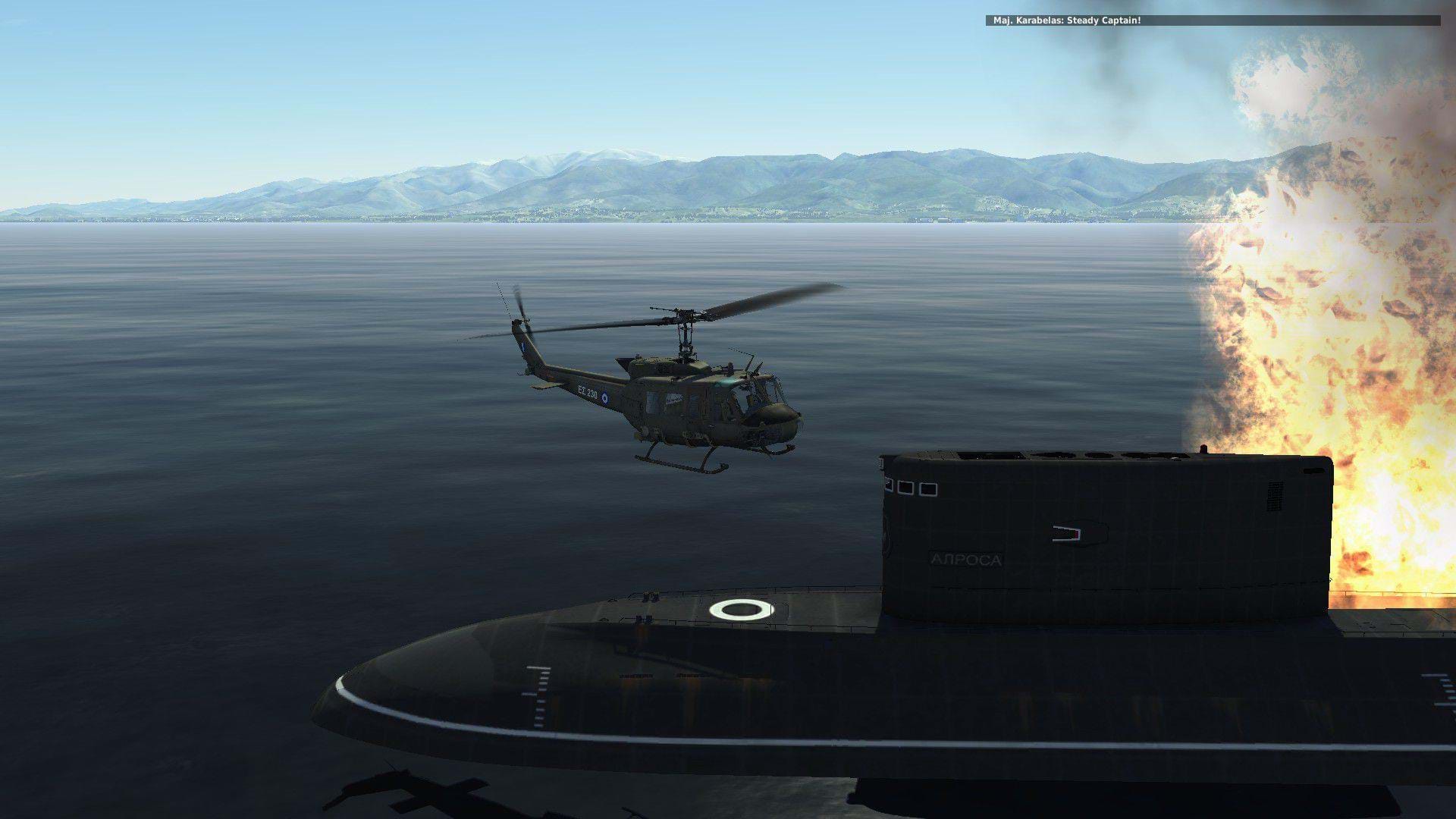 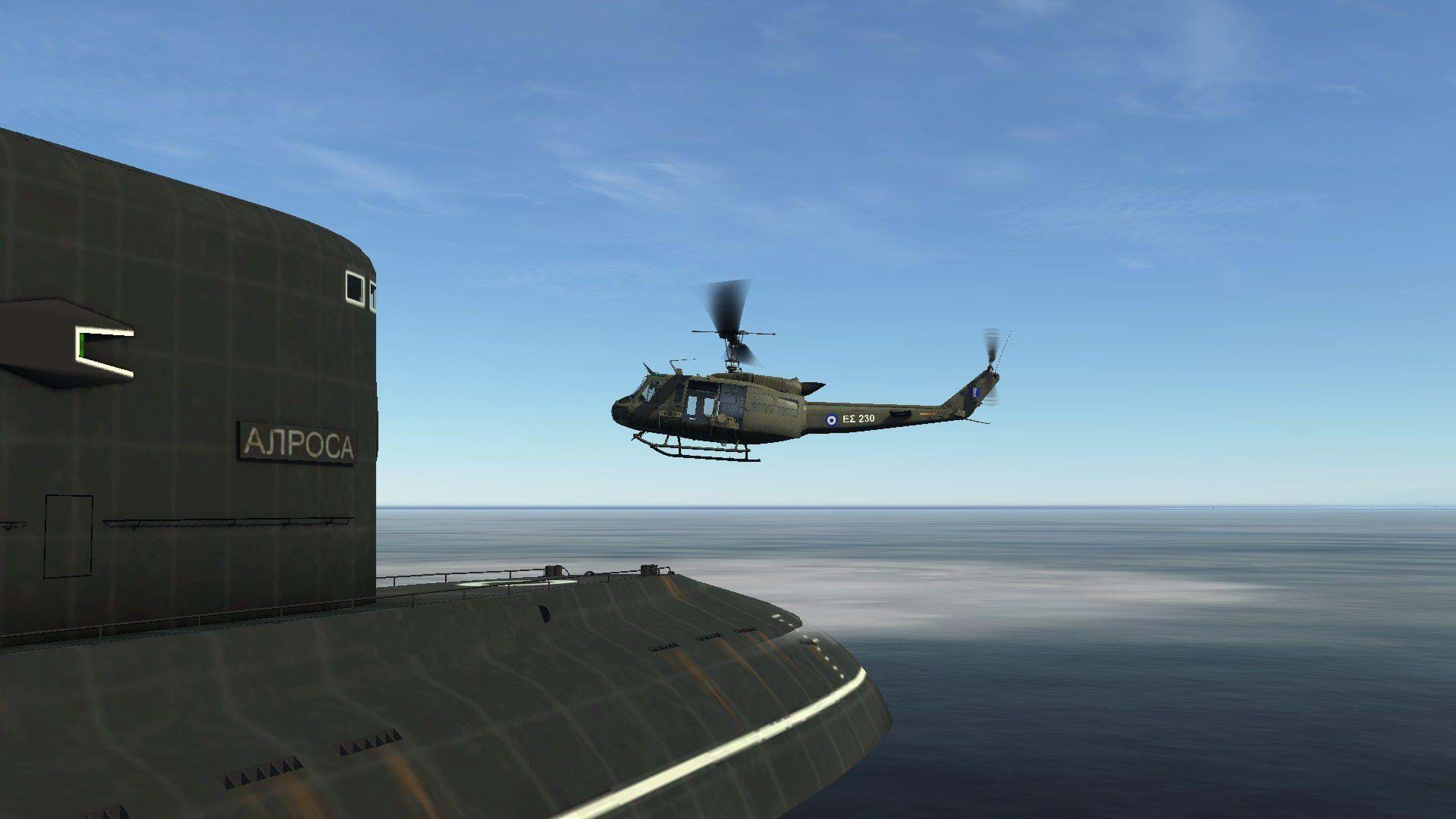 The weather is also different from mission to mission. Do not expect clear blue skies and calm winds for every mission.

Argo is not a campaign that you are going to rush through. The missions aren’t short. The entire campaign will give you plenty of hours of game play. That being said, not all of those hours are going to be exciting, which we’ll talk about next.

One of the things that a player, and I do mean player in this case, not simmer, is that Argo is a story based campaign, not a scenario based training mission. So, if you’re a serious military flight simmer, you should know, and accept this prior to playing any Argo missions. For the most part Argo is entertaining; it’s a good mix of missions that show off the UH-1’s versatility. Once you’re on the objective, the missions are very fun. 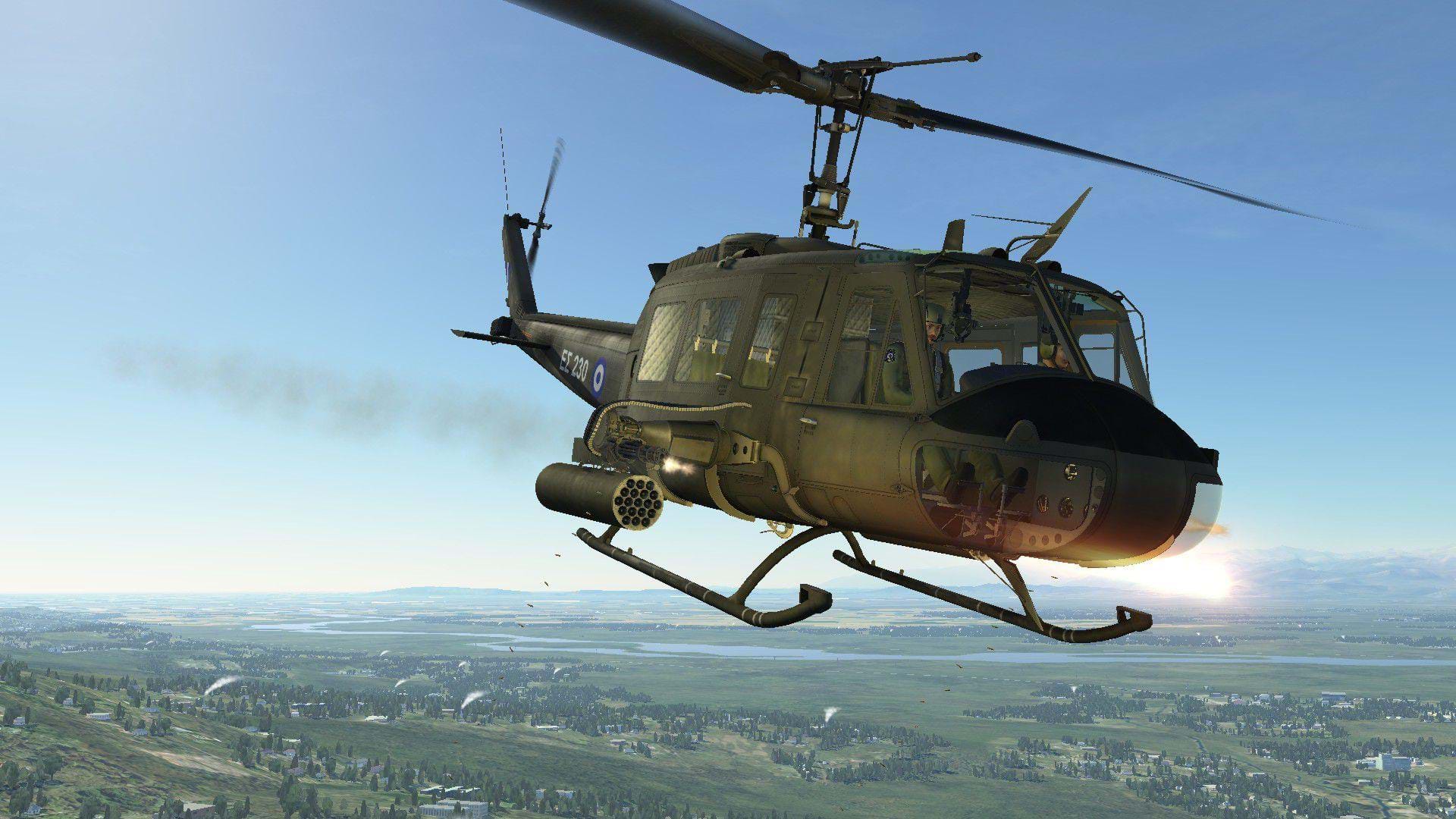 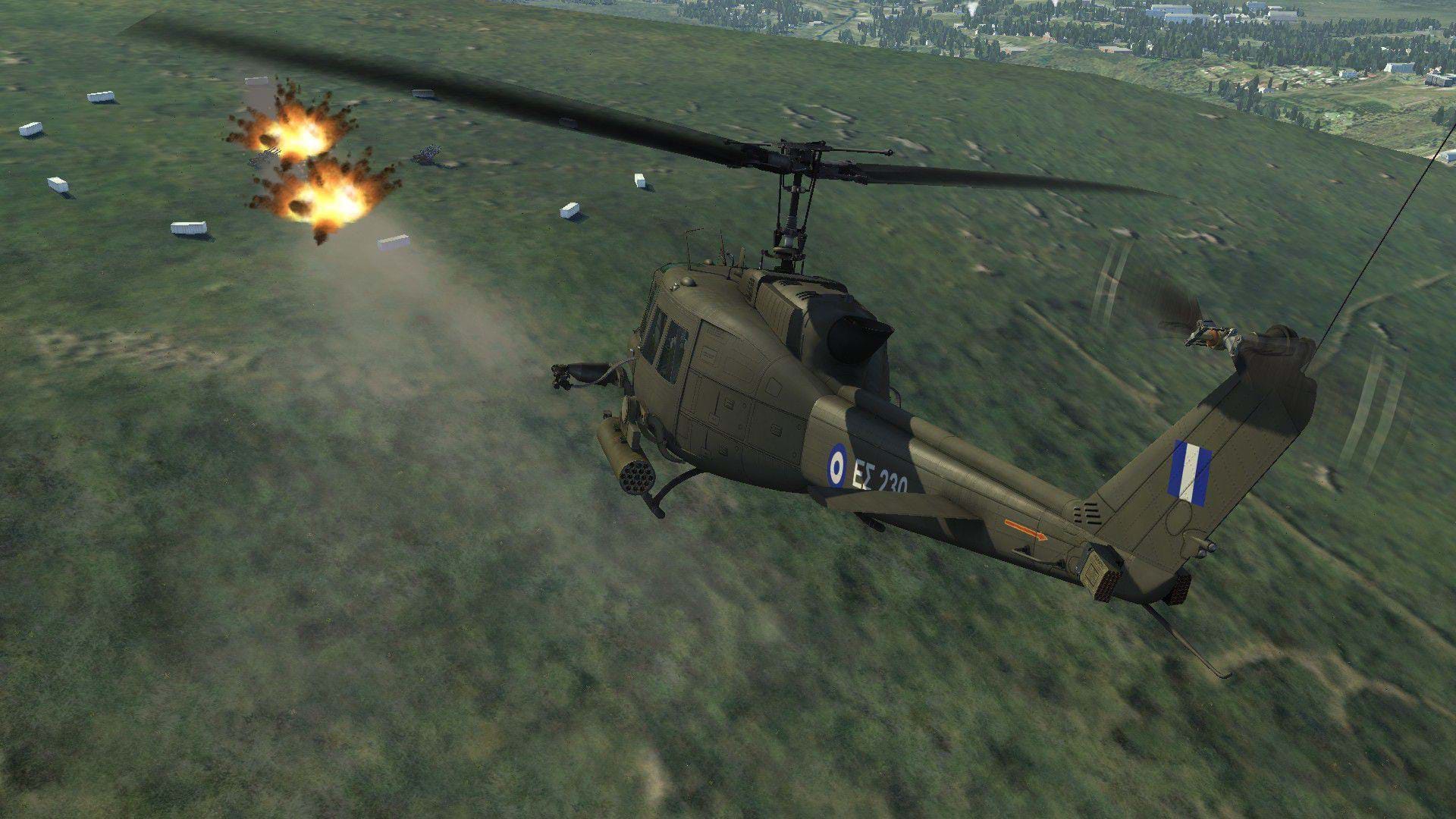 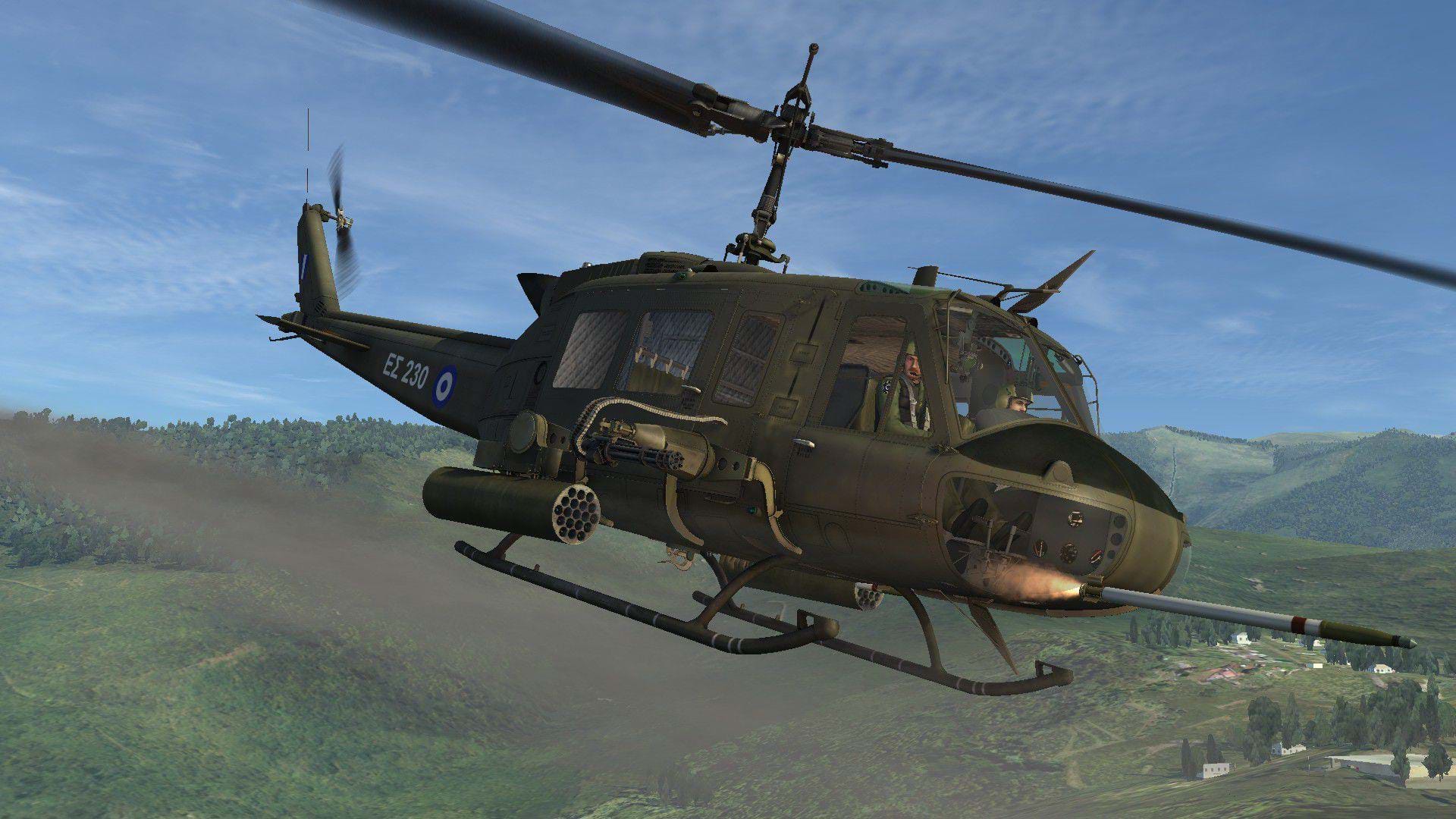 Some of the missions are genuinely challenging, especially the sling load missions. Landing on the deck of a moving ship is also genuinely tough to do, especially when flying on a 2D monitor with little depth perception. However, some of the missions seem to be artificially challenging. What I mean by that is that sometimes, the scenario isn’t very realistic, which makes the mission more challenging than it would actually be in it’s simplified, more realistic form. We’ll explore than in the next section. 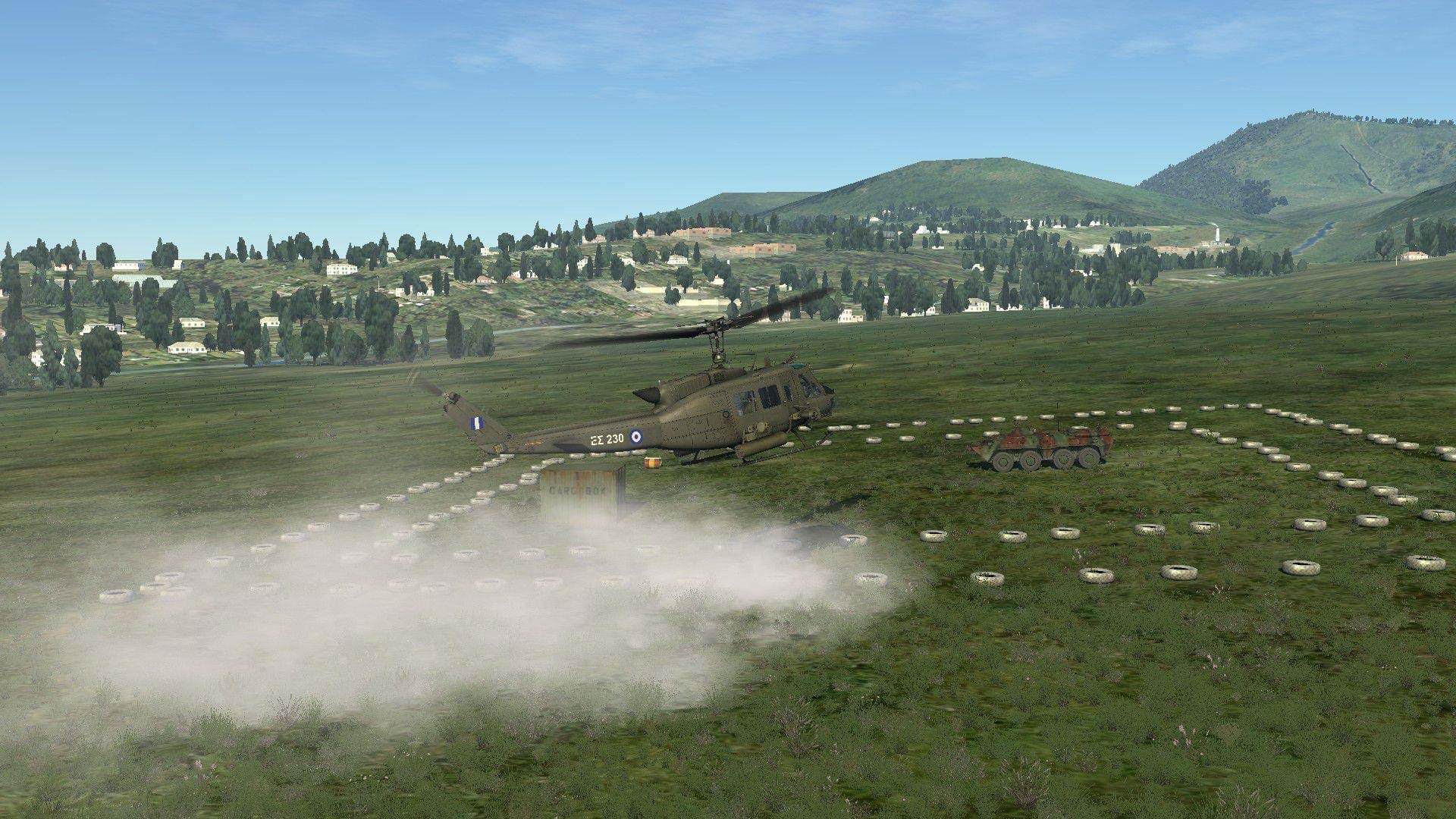 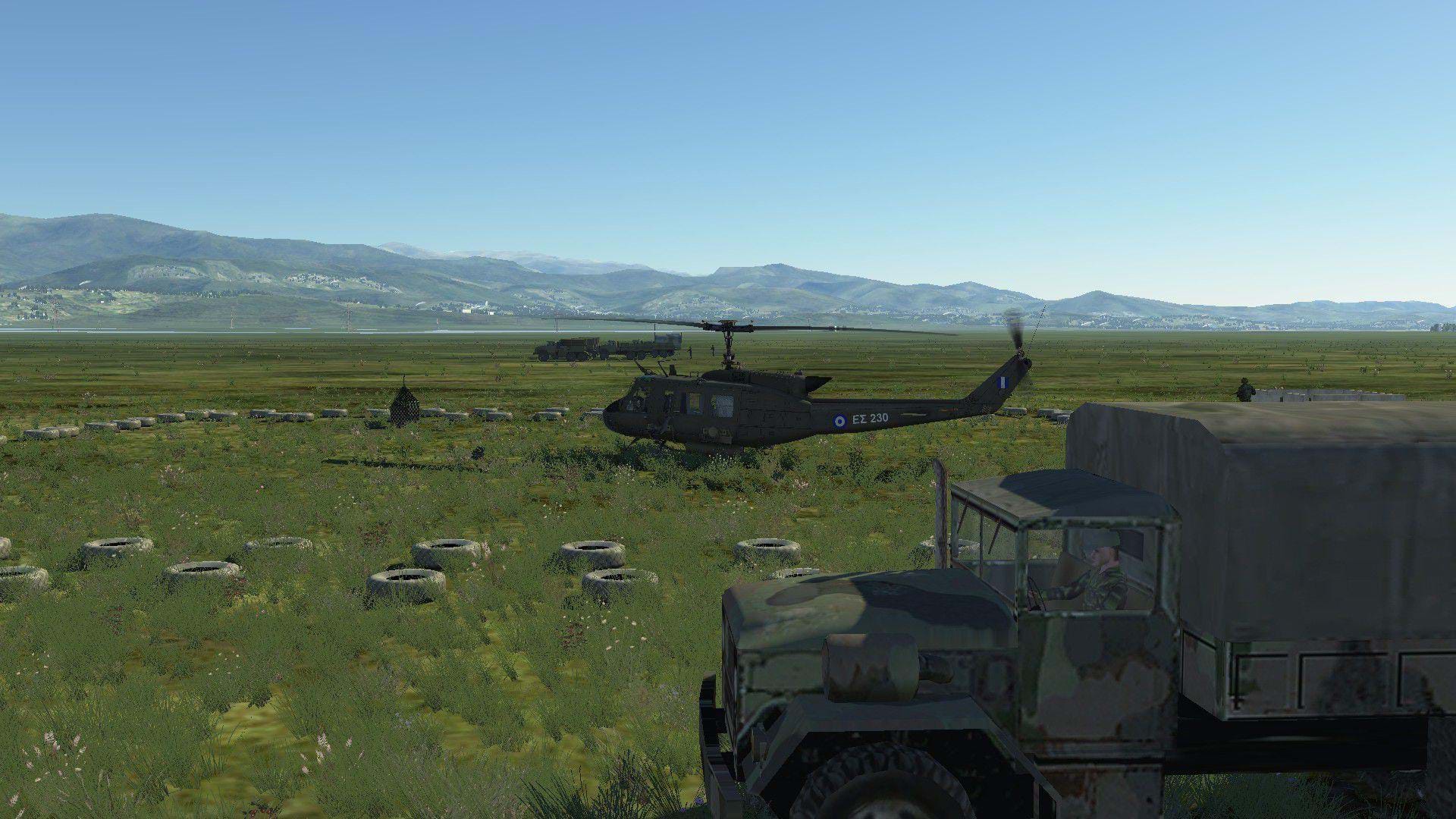 I will say upfront, I acknowledge that the creators of Argo probably had entertainment in mind instead of realism. As I was flying each mission, it also became clear to me that the creators might not have had any real-world experience in mission planning and decision making. I kept all of that in mind when writing this review.

One of the things that Argo gets right is the long boring transit times from the take off point to the objective and back. I know that sounds trivial, but the majority of a mission is just getting there. Argo relies mostly on FM homing and ADF for navigation. Which are both obsolete forms of getting around, but it’s all you get with the UH-1H in DCS so they had to work with what they have. In the early missions of Argo, transit times aren’t short! There is a lot of time to sit and watch the scenery coast by beneath you. In real life, this time would be spent chatting with your crew and wingman, usually about something wildly inappropriate that would get you fired from a normal job. In Argo, the only thing you have to break up the monotony is a few bits of narrative dialog.

There are many things in Argo that would make any military pilot I have worked with cringe. Most of these things are likely for the reasons listed in the first paragraph of this section. To me it was a lot like watching a movie with military helicopters in it. It’s entertaining sure, but it’s usually not a very accurate representation of how military operations are executed.

One of these examples is performance planning. Argo missions seem to be designed with no thought to aircraft performance or aircraft limitations, especially in the early missions. There are times where you will be overloaded and be forced to exceed aircraft limitations for the entire mission. For example, in one particular mission, you’re tasked with sling loading Cargo, then going to a firing range for gun and rocket practice. There’s a lot wrong with that scenario. The creators only seemed to consider the aircraft max gross weight as it’s limiting factor, which would be poor performance planning in real life. During this particular mission I mentioned above, the player must operate with the engines EGT well within the 30-minute limit range, which wouldn’t be an issue, accept the mission is much longer than 30 minutes.

Like I mentioned before, during this mission you’re also expected to do some aerial gunnery practice, which isn’t a very realistic mission set for a UH-1H. Carrying a sling load and a full combat load of offensive weapons isn’t a realistic mission set. Realistically, an aircraft with performance like the UH-1 would either fly the cargo or the offensive weapons, not both. This is one of those aspects that artificially increases the difficulty of the missions. 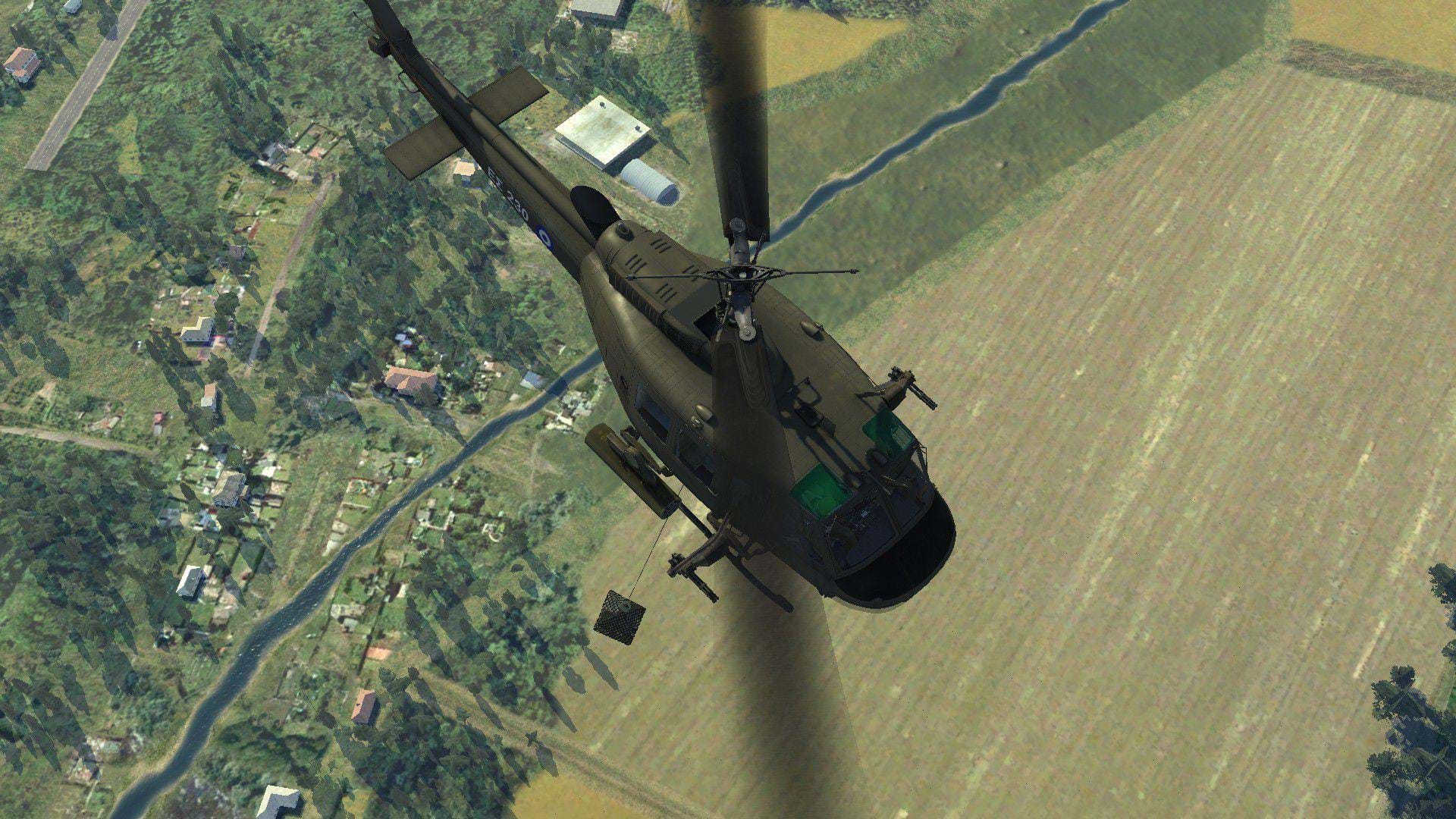 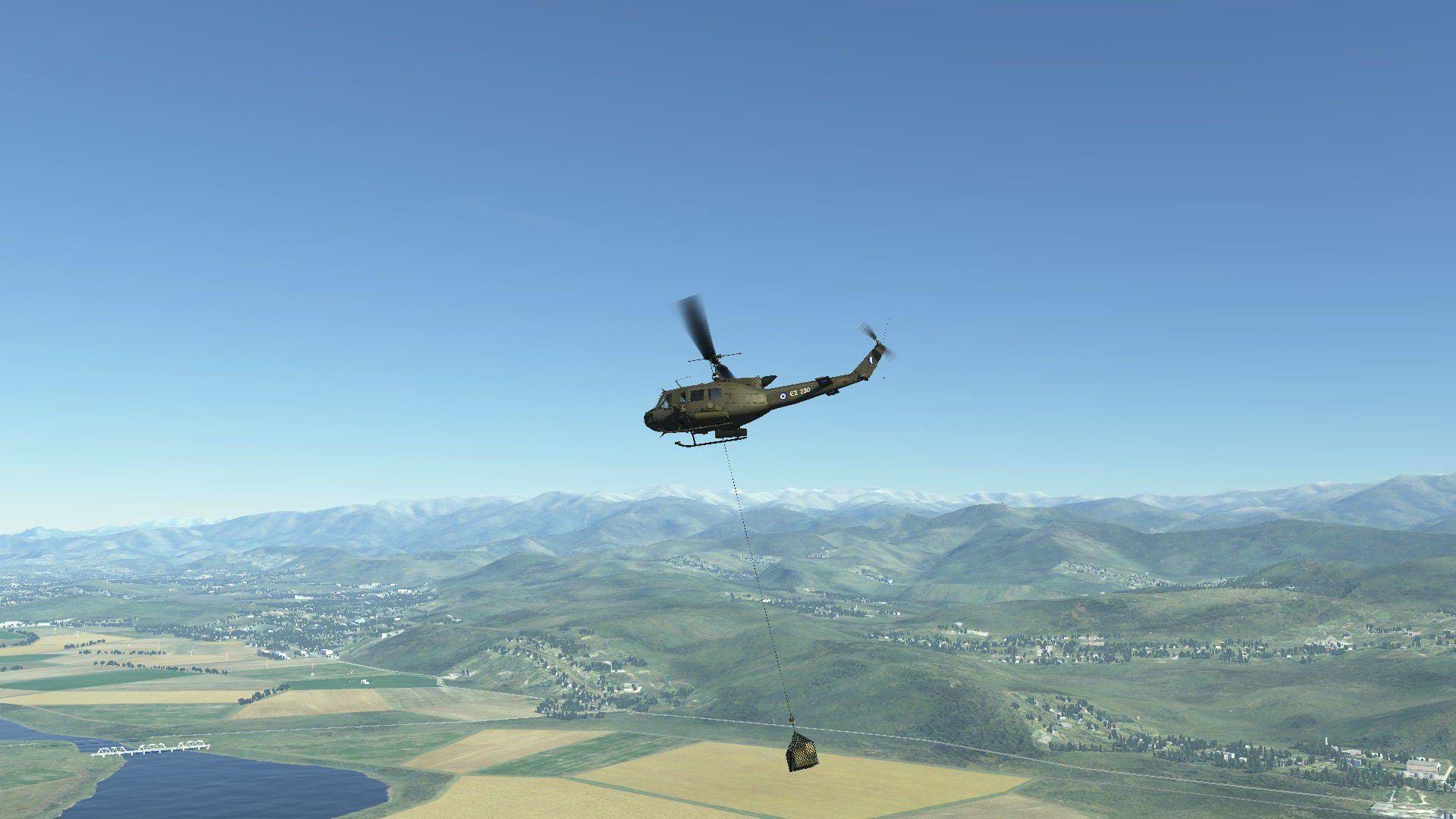 Another example is the weather. Early in the campaign you’re tasked with a mission that has you takeoff in some pretty poor weather conditions. I believe the intent of the creators was to make this mission really challenging and it is, but in real life, flying in visibility and cloud ceilings that poor, at night transitioning from sea to land during a thunderstorm is just a poor decision, especially given the missions motivation for doing so. It’s generally a terrible idea to fly a mission in conditions that would not only put your crew at a high level of unnecessary risk, but also likely prevent you from accomplishing your mission in the first place. Fortunately, for the player, things will work out. One thing I will give DCS credit for is the effect of lightning on the ADF receiver. In real life, the needle on your ADF will often deflect from the beacon and momentarily point in the direction of a lightning strike. This particular mission takes advantage of that to good effect. 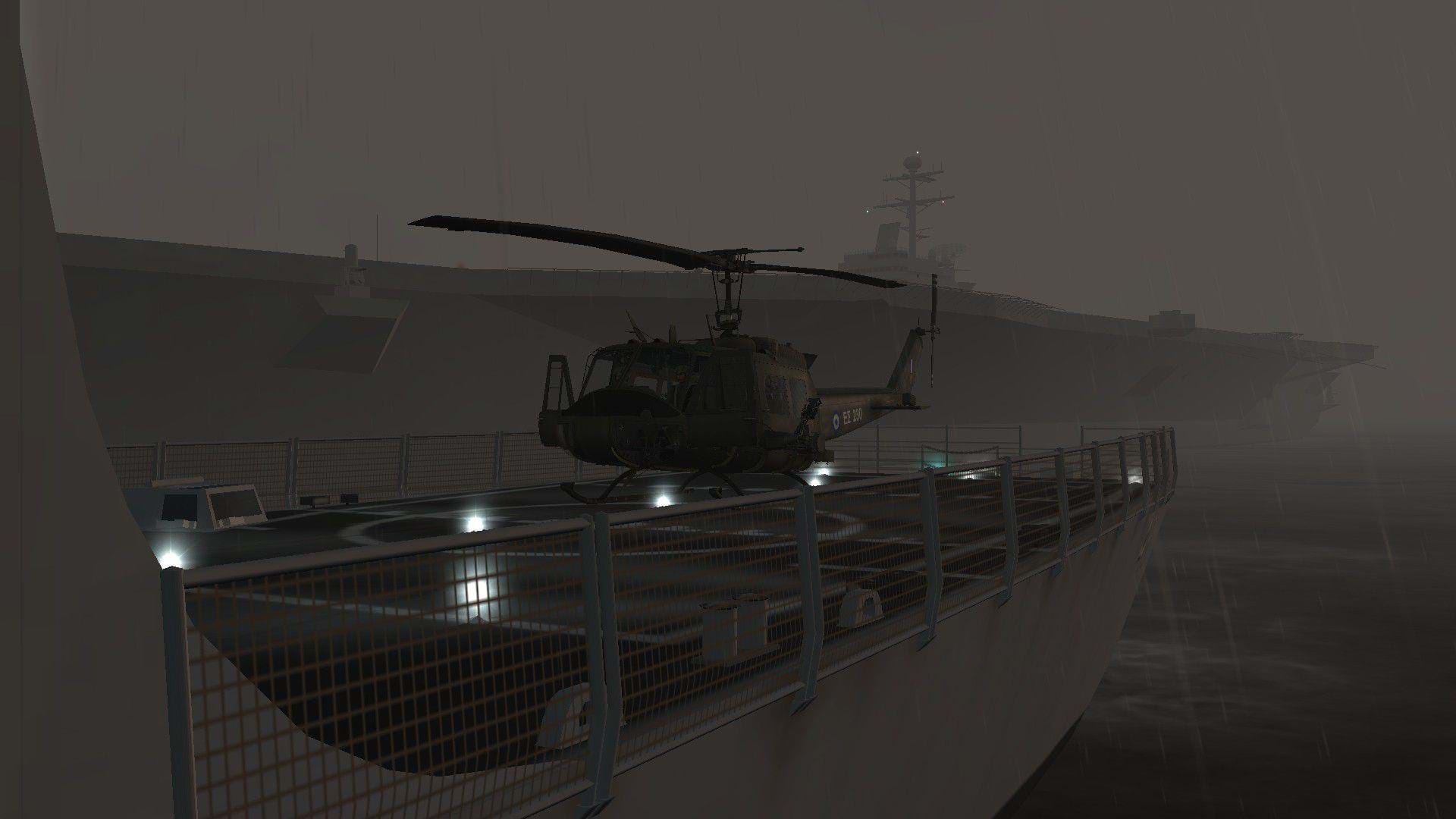 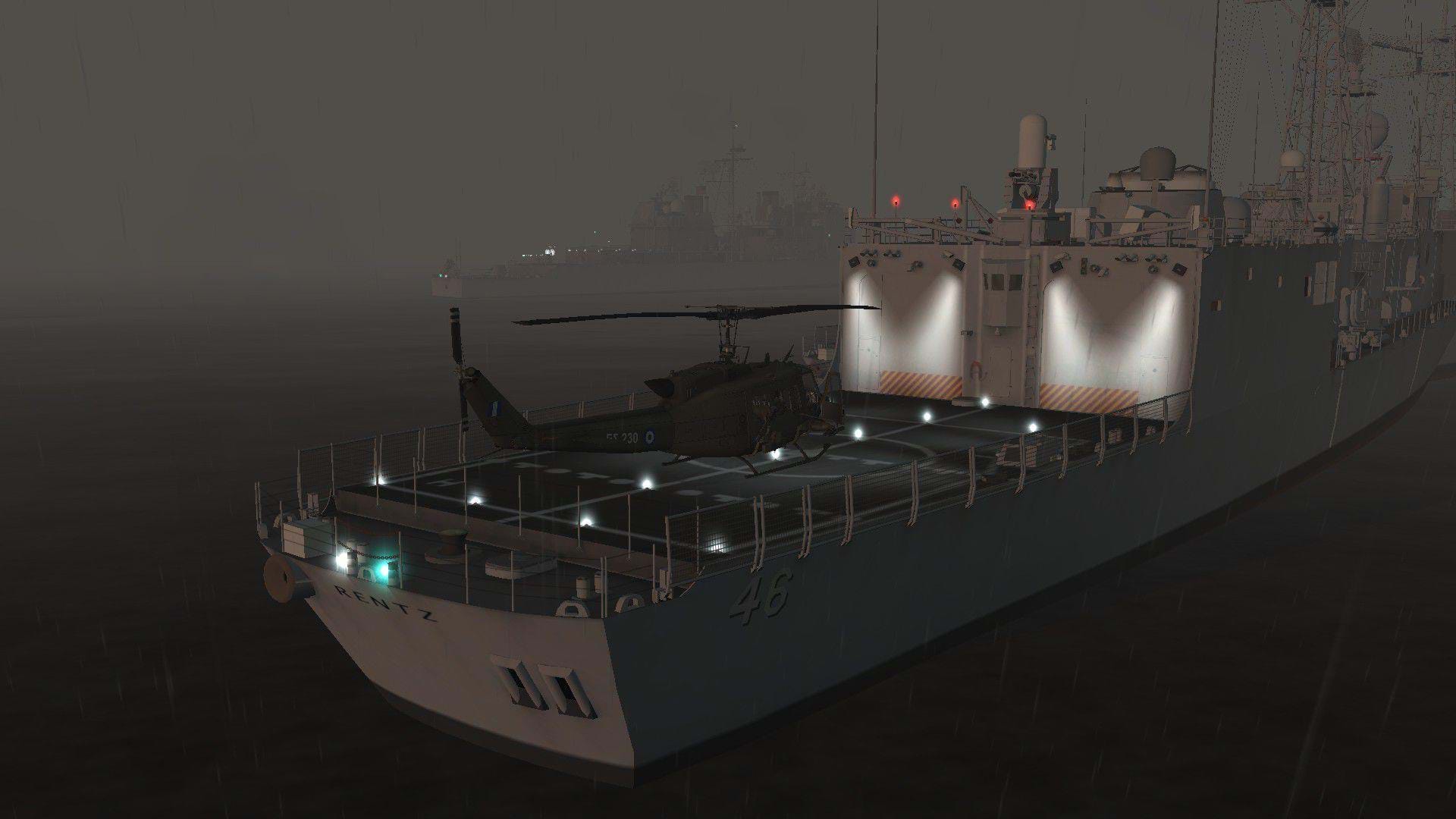 Despite some of the realism issues that I had with Argo, it’s still a really fun campaign to fly. Like most campaigns and modern video games, it’s really more like an interactive movie. So, with that in mind, some might be more inclined to play the missions over again more than others. For me, the best part of Argo was not knowing what was coming next. The plot got a little more predictable as the story plays on, but it was still fun to unexpectedly find the nature of the mission change and have to rapidly adjust to the new situation. So, for me, re-playing these missions won’t be as much fun because I already know what’s coming. Others may enjoy the mission structure and not mind knowing what’s coming up next.

Is Argo worth the money? Well, that all depends on what you’re are looking for. Argo isn’t a training tool, so I wouldn’t look to it for any sort of real world applicability, but if you’re looking to shut out the real world for an hour or two, and just have some fun in DCS, flying missions in the Argo campaign is a good way to spend your cash.

Diversity 8
Duration 7
Re-playability 6
4
Entertainment 9
Difficulty 8
Total score
7.3
* The above final rating is calculated from a weighted average and not the direct arithmetic average. This means that some elements of the review will have a higher influence in the final score than others.
Click here to purchase/download or more information