The little Soviet-built helicopter is now available for purchase at the Microsoft marketplace, and I got to take a good look at it. 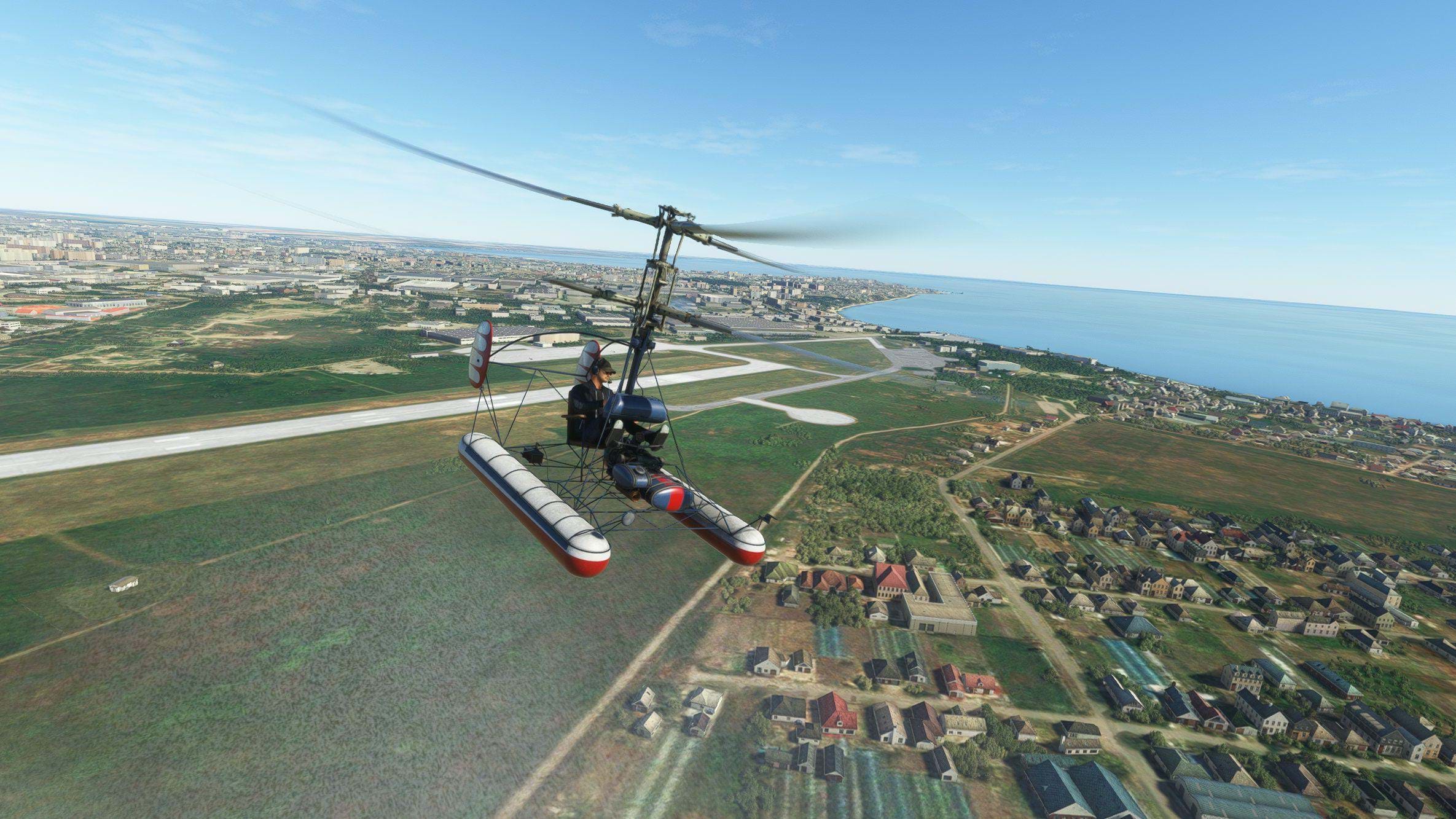 Are you a fan of obscure or weird rotorcraft projects? Well, you’re in for a treat then.

I have to be completely honest here and say that I usually spend a lot more time previewing or reviewing products. I don’t like to rush it or “speed it up” to be “the first” or “not late to the party”. I know the world nowadays revolves around “being the first” but really… Not my thing.

I like to spend time exploring a product so that I am sure I don’t miss anything.

So, this preview is a bit of a surprise, even for me.

Why “even for me”? Simply because I was not expecting to do it at all. I started this article as a news piece about the release of the Touchingcloud Ka-10M and I ended up here, with a preview.

Not a review, there will be no rating. I rather call it a preview even if the helicopter is out. And the reason I am doing that is because Touchingcloud is being very clear about something: this is not the final product. Especially regarding flight dynamics. They will take advantage of native support, so this is a sort of a… Early Access, if you want to call it that way.

The startup in a nutshell

Yeah, I’ll start here just to illustrate my point above.

Turn the battery on, enrich your mixture, rotate the starter key, and off you go. I suggest you drag the mouse since you’ll need to hold it in ‘start’ mode for a few seconds since it takes a bit for the engine to start – which is quite cool! 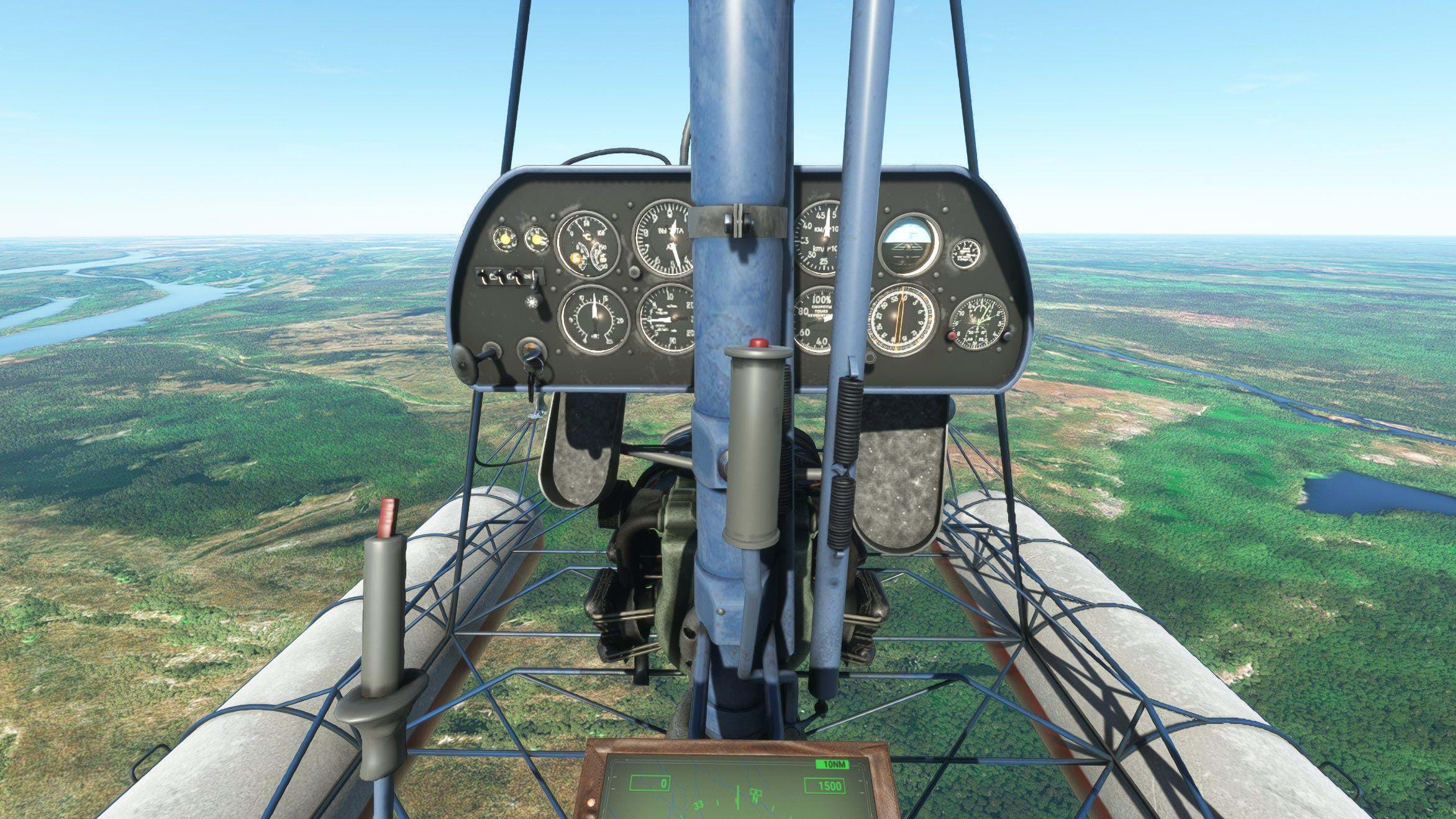 OK let’s start with the first contact with the little thing.

We’re talking about a single-seat, open steel-tube structure with an engine, a pilot seat, a fuel tank, and a couple of floats.

There you go. A helicopter.

Looks safe too, right? Sure it does!

Enter the “cockpit” and you will be in for a surprise, with the massive rotor mast right in front of your face. For a helicopter with an amazing view, the one you need the most is kinda occupied by a huge metal cylinder.

Which made me laugh, really. Priceless.

What systems? Didn’t you read the full systems above?

Well, OK, there’s a bit more to it. An alternator, some lights… And even a small tablet with a moving man. 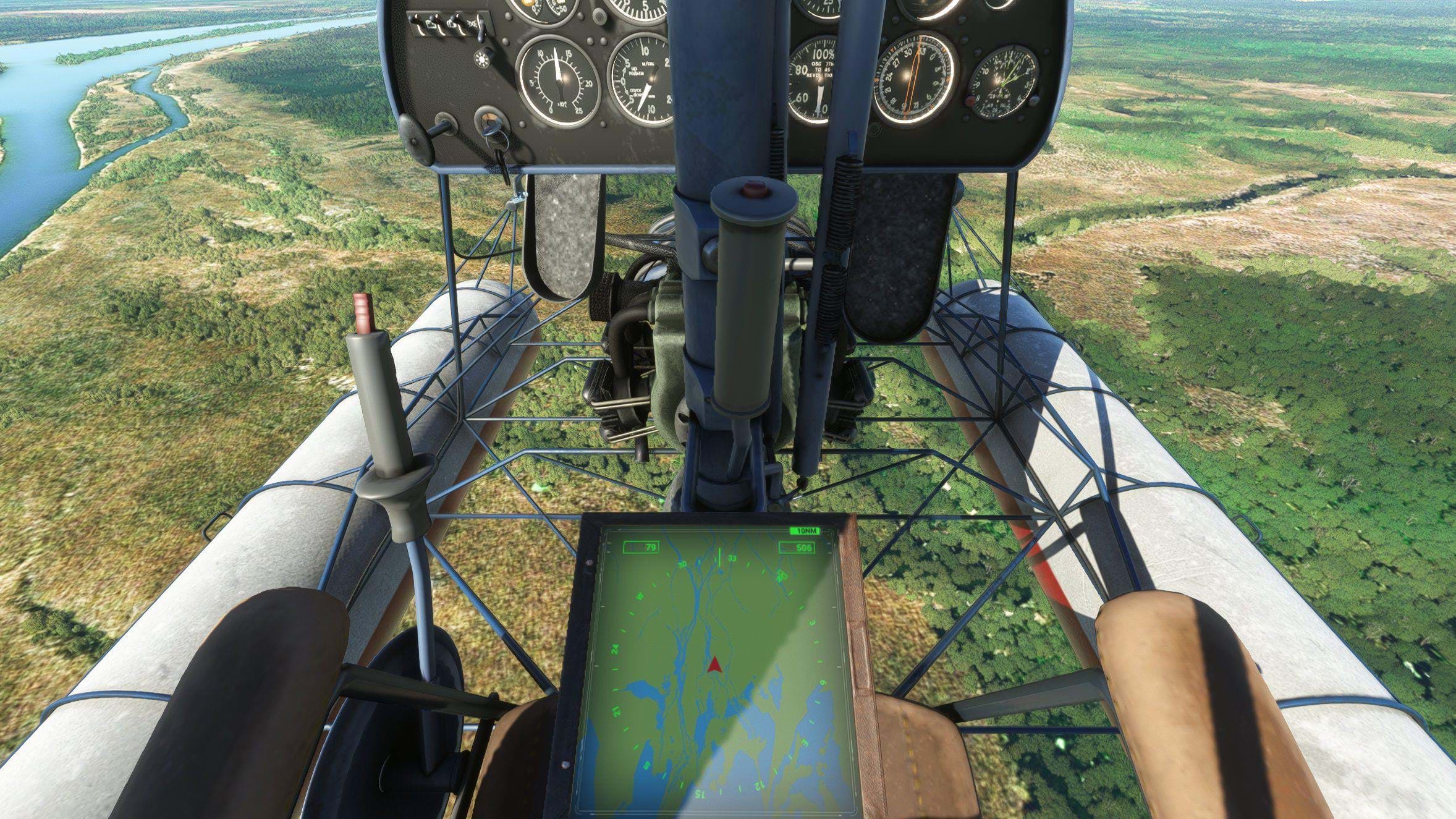 I love the tablet, by the way! The design of the thing, being a modern screen in a retro frame? GORGEOUS. No extra stuff, no frills. Just a nice, simple way to help you get around. I love it! 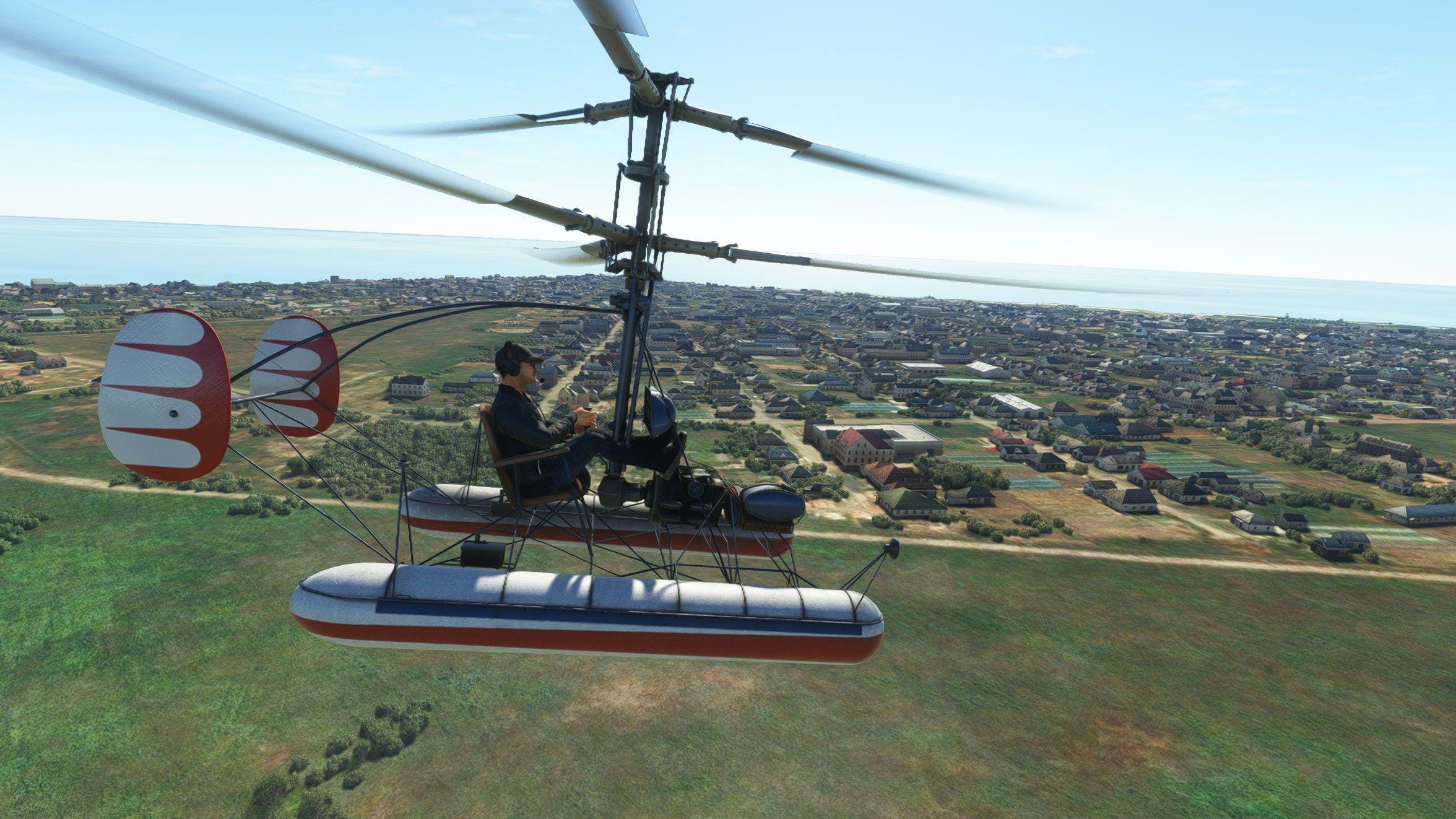 This is the weak spot of the Ka-10M, but it’s understandable, really.

Touchingcloud made its own flight dynamics from scratch, and I believe it’s just so that they could release it right away until MSFS comes out with its own native flight dynamics .

The flight dynamics are not stellar and the Ka-10M suffers from some of the problems I have pointed out concerning the HPG H135 , for example, like the lack of inertia. This makes the Ka-10M feel a bit weird while flying. Add that to the fact that I believe the floats need a bit more of drag into them and the controls feel sluggish and yeah… It needs some work.

Now one could argue that Touchingcloud should have waited for native support for helicopters in the sim. After all, we’re less than 1 month away from the release of Sim Update 11, which will bring all the goodies for the 40th-anniversary edition, including helicopters, right?

I won’t, though. It was the team’s choice to make it happen right now so we could start enjoying the helicopter right now and I can understand and respect that. But the team is waiting for native helicopter support to upgrade it.

The sounds are quite decent. I would like to hear the sound of the engine a bit louder and also the sound of the wind, considering nothing is protecting the pilot from getting the full blast of air as the helicopter moves along. Not only from the front but also from the rotors.

That’s something I would like to see improved in the future for sure. 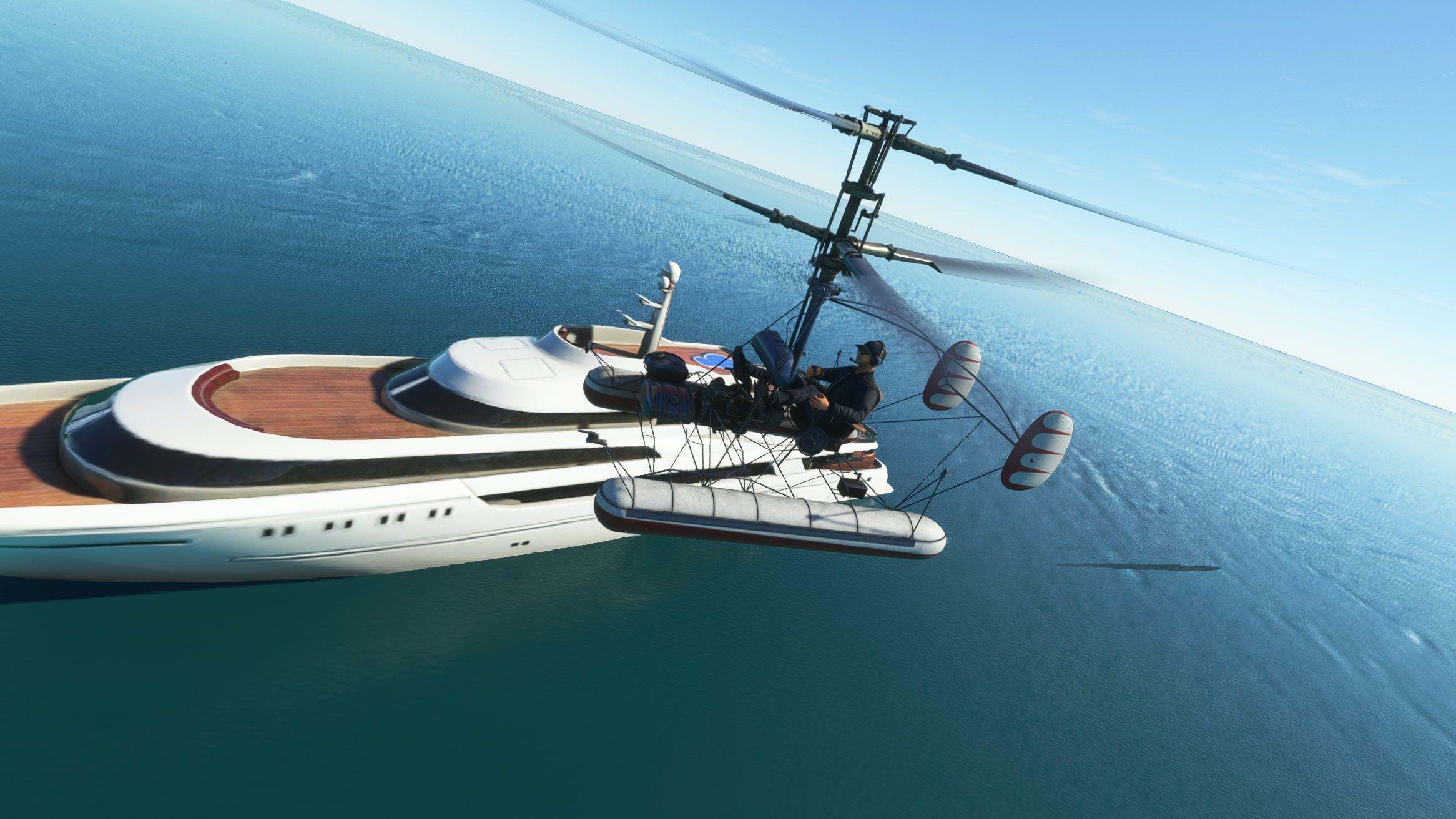 This is where the Ka-10M shines, really. Use it in a regular monitor and it’s a blast to fly around in but I found the cyclic tends to disappear when you pull it as it “enters the camera”, which can be annoying.

Use it in VR though, and it’s absolutely fantastic. One of the best experiences in the sim, for sure.

I have mentioned the retro-looking tablet already but there’s another nice detail that Touchingcloud added to the Ka-10M, which is the ability to add or remove the pilot. It’s nothing new but it’s a nice touch and I like it a lot. 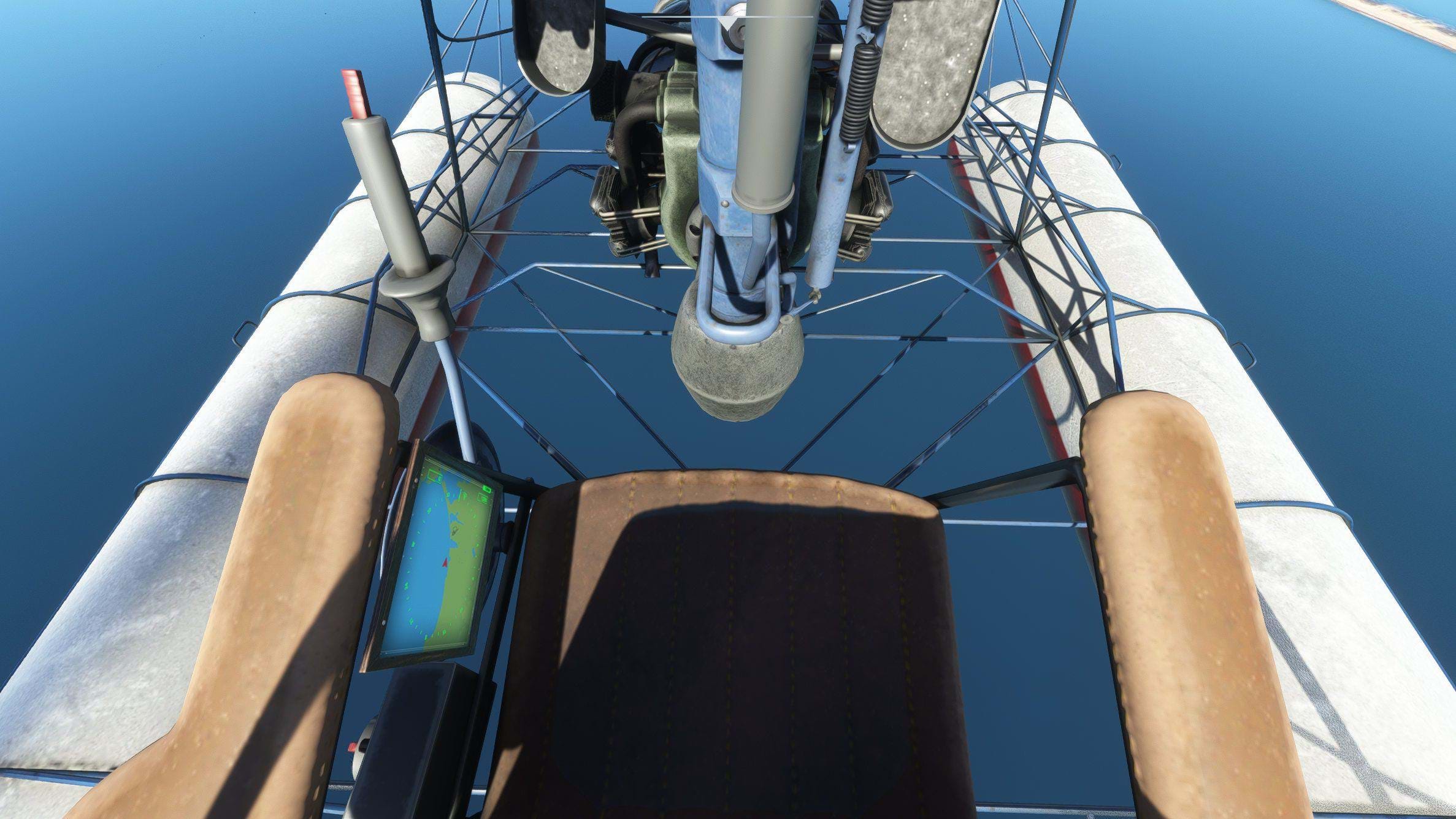 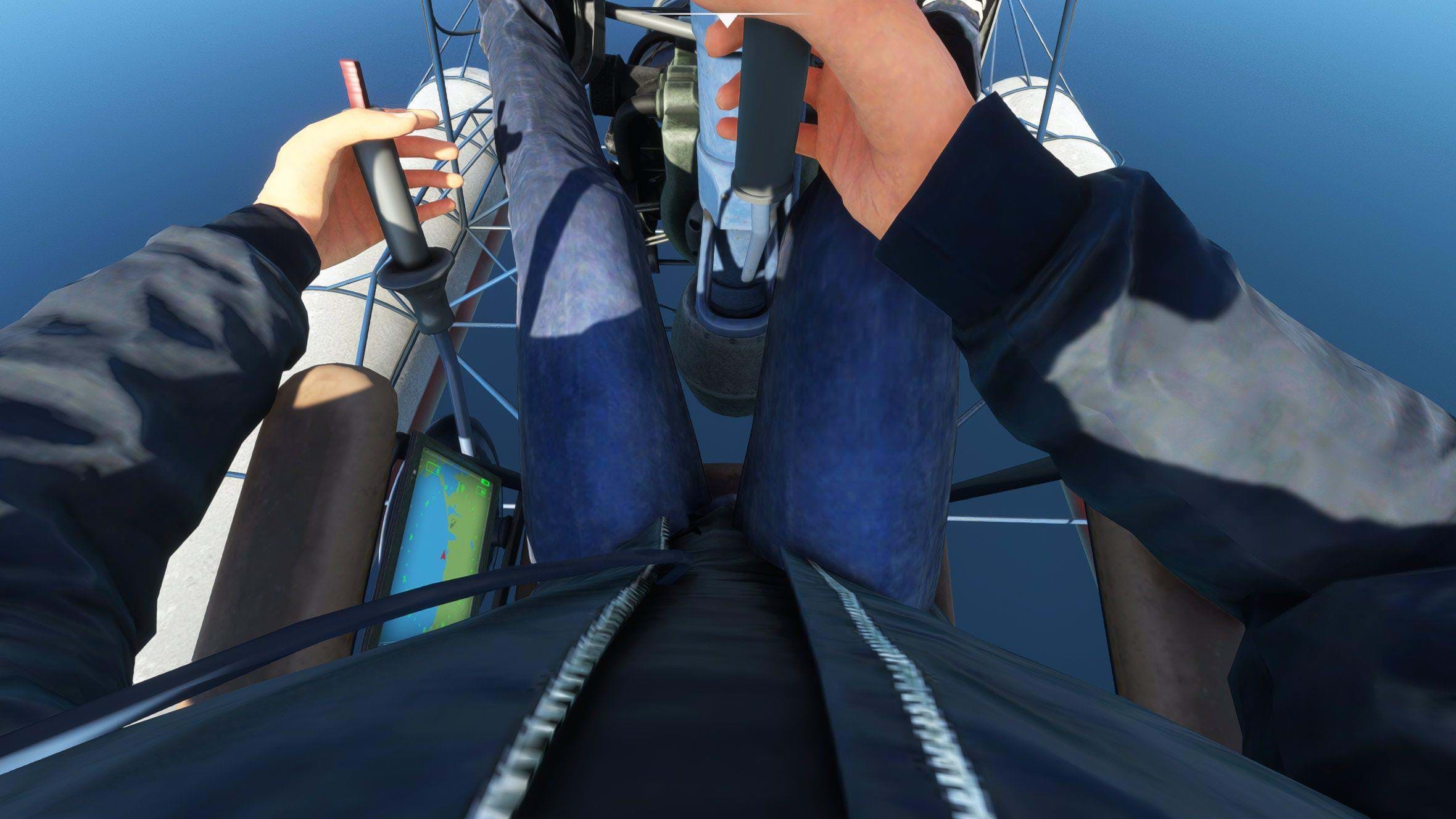 Oh yes, and you do have a checklist. Not that I think you will need it, though, very honestly, but it’s there!

The future of the Ka-10M

Touchingcloud is not stopping development. As I mentioned earlier, they are waiting for native helicopter support to come out so they can upgrade the flight model, and also add/improve failures and animations.

Oh, and they will be offering an aircraft carrier group too, which is pretty cool!

Yeah, already! There’s not a lot to say about the Touchingcloud Ka-10M. It has simple systems, it’s a simple helicopter, and the model is not complex, but it does its job just right. There are a few nice liveries and, although the flight model could have been better (it really needs work), I have had a blast with it, especially in VR.

If you are looking for a “serious” (whatever that is in a flight simulator) helicopter or a “study level” (again, what’s that?) product, this is not for you. But I don’t think that’s Touchingcloud’s intention either and that is particularly visible when you check out the price.

It’s being sold for €5.49, which should translate to about the same in US$. About 5 bucks. That’s dirt cheap. I’m not saying Touchingcloud is not taking this as a serious product for their company. I just believe they fully understand what it is, and you should too.

The Touchingcloud Ka-10M for Microsoft Flight Simulator is a fun little helicopter that lets you explore the world in its full glory, and land everywhere – including water – and the team is not only offering it at quite a nice price, but they are also upgrading it and improving it in the near future.

I will definitely revisit this article once that happens but, until then, I really have to recommend you spend 5 or 6 bucks on this addon and go have fun with it. Do not expect a brilliant flight model but you will have a blast with it for sure.