When I first picked up flight simulation as a hobby in the mid 90’s, one of the best parts about it was the amount of freeware available. Websites like Keith’s Virtual helipad had a great collection of free add-on helicopters for helicopter simulator enthusiasts. This wide selection of aircraft to choose from is what really got me hooked on this hobby. Every day after school, I’d rush home to check and see if there were any new aircraft available to download. Usually about once a week or so, there was something new.

As the flight simulators advanced, and 3D modeling software became more accessible, we saw a rise in freeware modeling, as well as an increase in quality of the models that could be produced. This inevitably led to the payware market that is the standard for flight simulator add-ons that we all enjoy today. As soon as high quality models became profitable, the freeware side of add-on development all but faded away after a few years. This is most evident in the helicopter community of flight simulation. FSX showed the fewest freeware models of any of its predecessors. X-plane wasn’t immune to this payware take over either, X-plane 10 also has significantly less freeware add-ons compared to X-plane 9.

This isn’t a knock on payware. I love what the dedicated design groups have done for our community. Their hard work and dedication has enabled the helicopter flight simulator community to continue to thrive, and keep pace with our runway addicted counterparts. Even though the volume of freeware has dwindled, its spirit hasn’t! As proof of this, we’re going to preview one of the most promising freeware add-on helicopters coming to X-plane 10. Tom Woods was kind enough to give HeliSimmer an early look at his take on the Bell 429.

Before we begin, I want to be clear, this isn’t going to be the same type of review as it would be for a payware model. For starters, this is an unfinished model. I’m not going to be overly critical, or spend a lot of time, if any at all, pointing out flaws or deficiencies. In addition to that, Tom put a lot of time and effort to bring us a new helicopter to play with in X-plane, and asked for nothing in return from the community. This model is a gift to the simulator community, and I’ll treat it as such.

The Bell 429 isn’t as famous as its single engine cousin the 407. But it is gaining in popularity across the globe in the light twin market. Tom’s 429 does a good job of showing off the 429’s sleek lines, and streamlined curves. 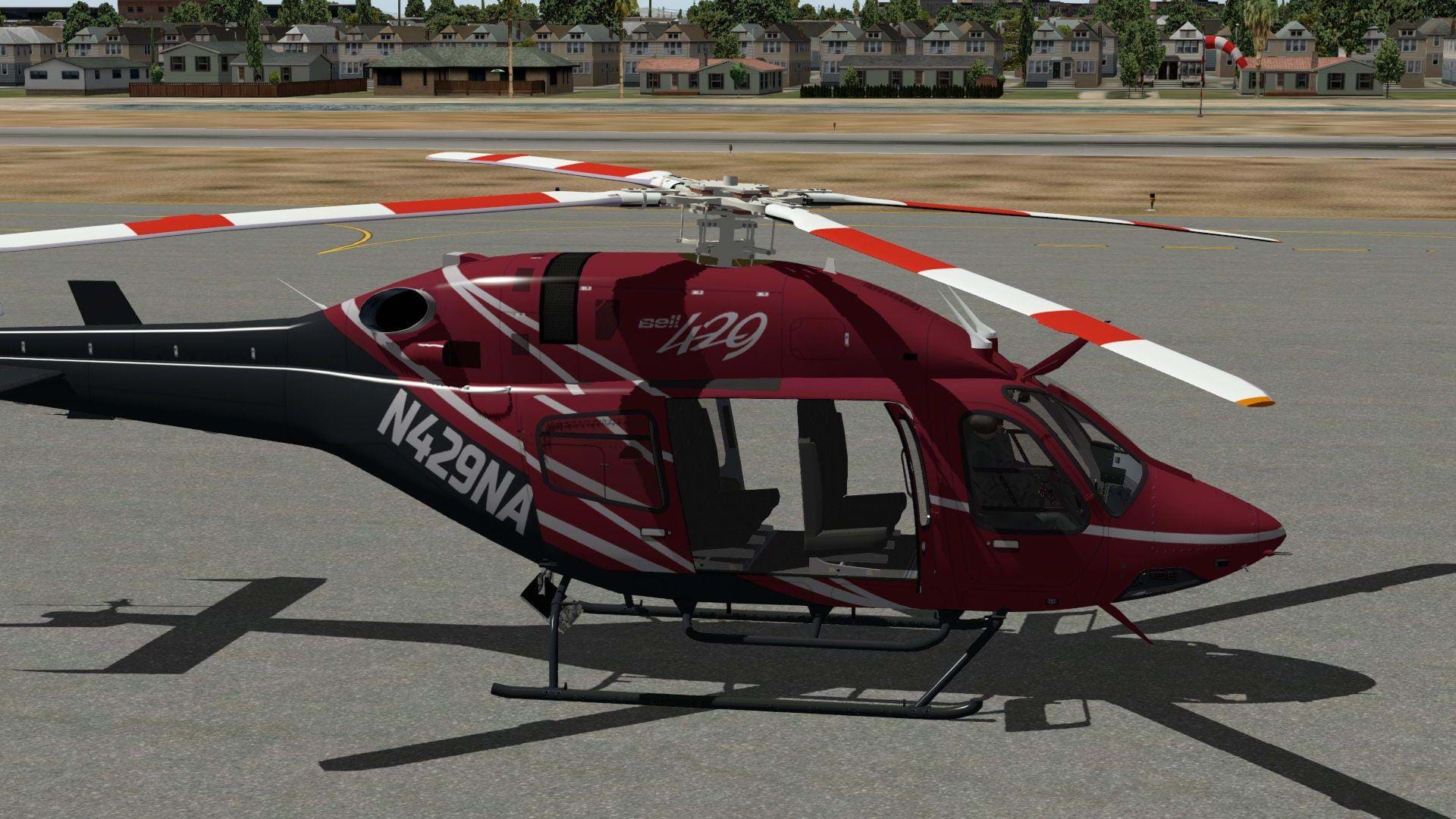 The main rotor head of the real life Bell 429 looks a lot like a scaled up version of the Bell 407’s rotor at first glance. Look a little closer and you’ll see it shares some common attributes with the Bell 412’s rotor head as well. Namely the overlapping hub yokes. This model’s rotor head doesn’t show that aspect, but the detail present is still quite nice. 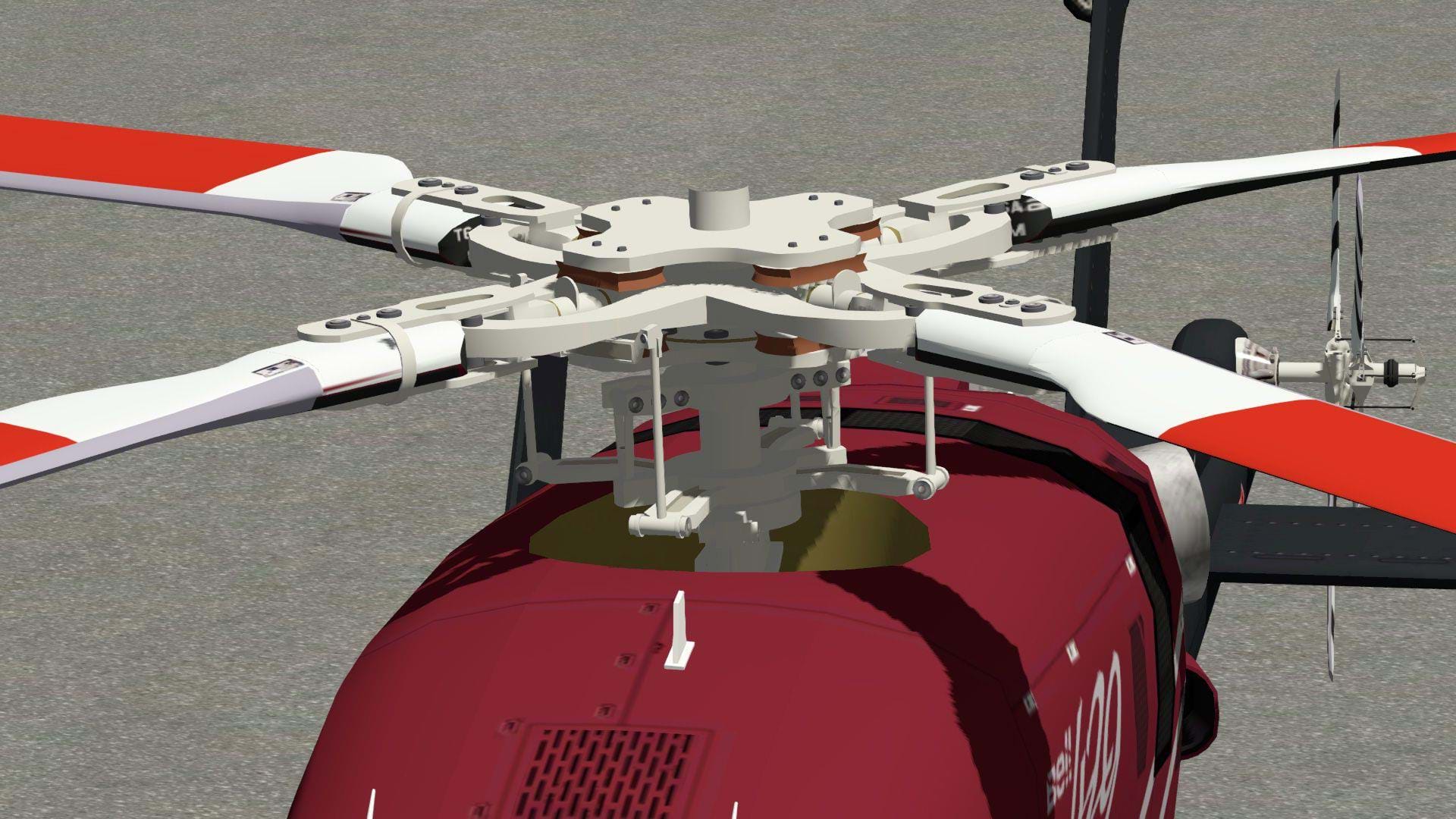 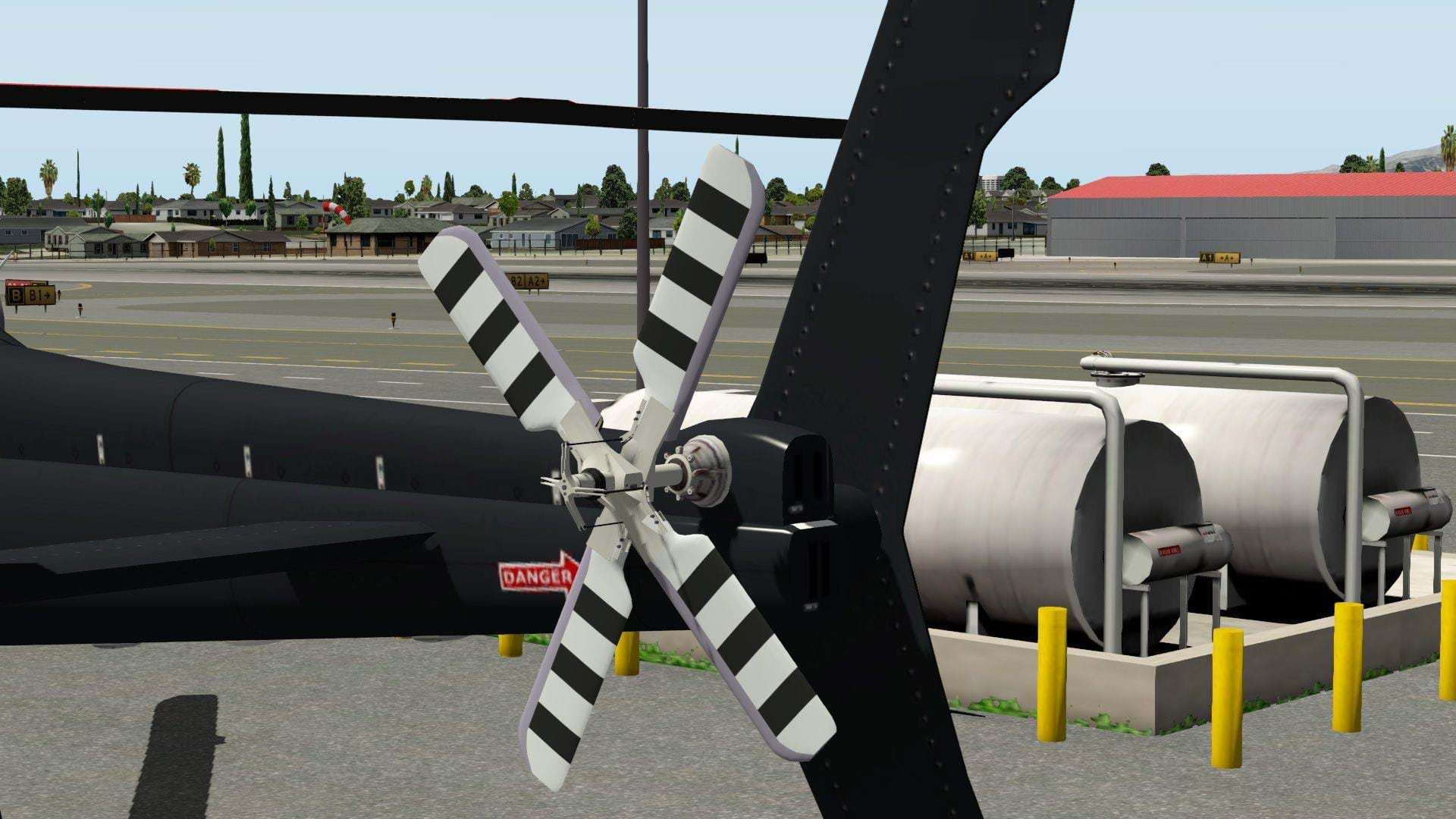 And various other accessories depending on the livery chosen by the user, and speaking of liveries, there are lots to choose from in this Beta.

The cockpit is a good representation of the actual Bell 429 crew station, the multipurpose displays and bezel buttons all look to be right. 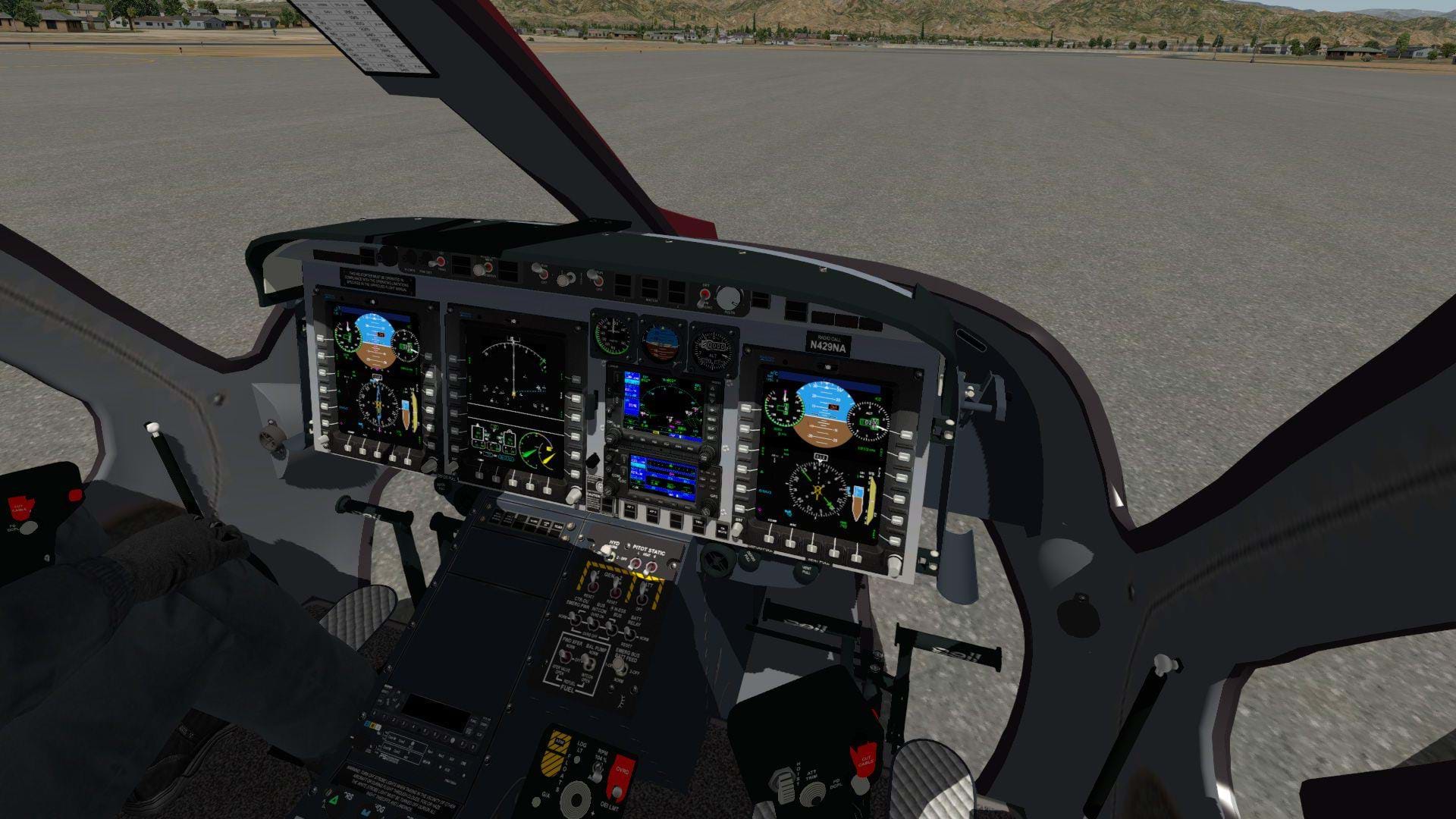 The sound modeling is pretty good. This model sounds an awful lot like a Bell 407, which is OK in my book as the two aircraft sound somewhat similar in real life as well. You’ll also get switch click sounds, and engine start sounds.

The real life Bell 429 is what most would consider a modern aircraft, which means a lot more automation and less pilot work load. So starting this aircraft is even less complicated than older light twins. I’ve never flown a real world Bell 429, but based off of the research I’ve done (I looked at some YouTube videos) the engine start sequence of this model is pretty close to real life.

This is still a work in progress, and this is just a preview, so I won’t go into too much detail on how this ship flies. However, in this stage of its development it handles somewhat like I would expect a helicopter equipped with a modern Stability/Command Augmentation System would.

Tom Woods’ Bell 429 is shaping up to be one of, if not the best freeware helicopters developed specifically for X-plane 10. As it is now, it looks just as good if not better that some of the payware X-plane 10 helicopters I’ve seen on the market. I suspect that when it’s finished, it will be competitive with other models you’d find at the X-plane.org store priced in the $25 range. Lucky for us, we’ll get this one for free!!

When it’s released, I think this will represent a new standard in freeware add-ons. This is my first experience with a model from Tom Woods, and I hope it isn’t the last. 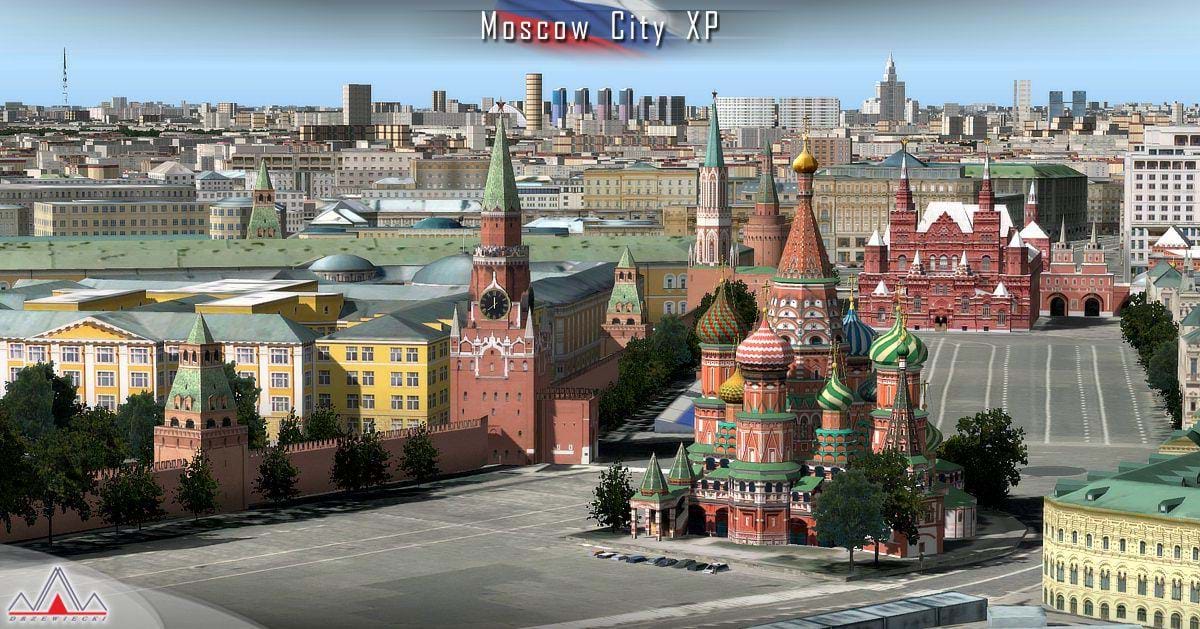