Preview: a new look at the R22 for the IPACS AFS2

Aug 17, 2018 | by Sérgio Costa
Video, Aerofly
Preview, Aerofly FS2, R22, IPACS
AFS2 is slowly evolving over time and helicopters are coming to the sim. IPACS is working on the AFS2 R22 and we got to give it another go. 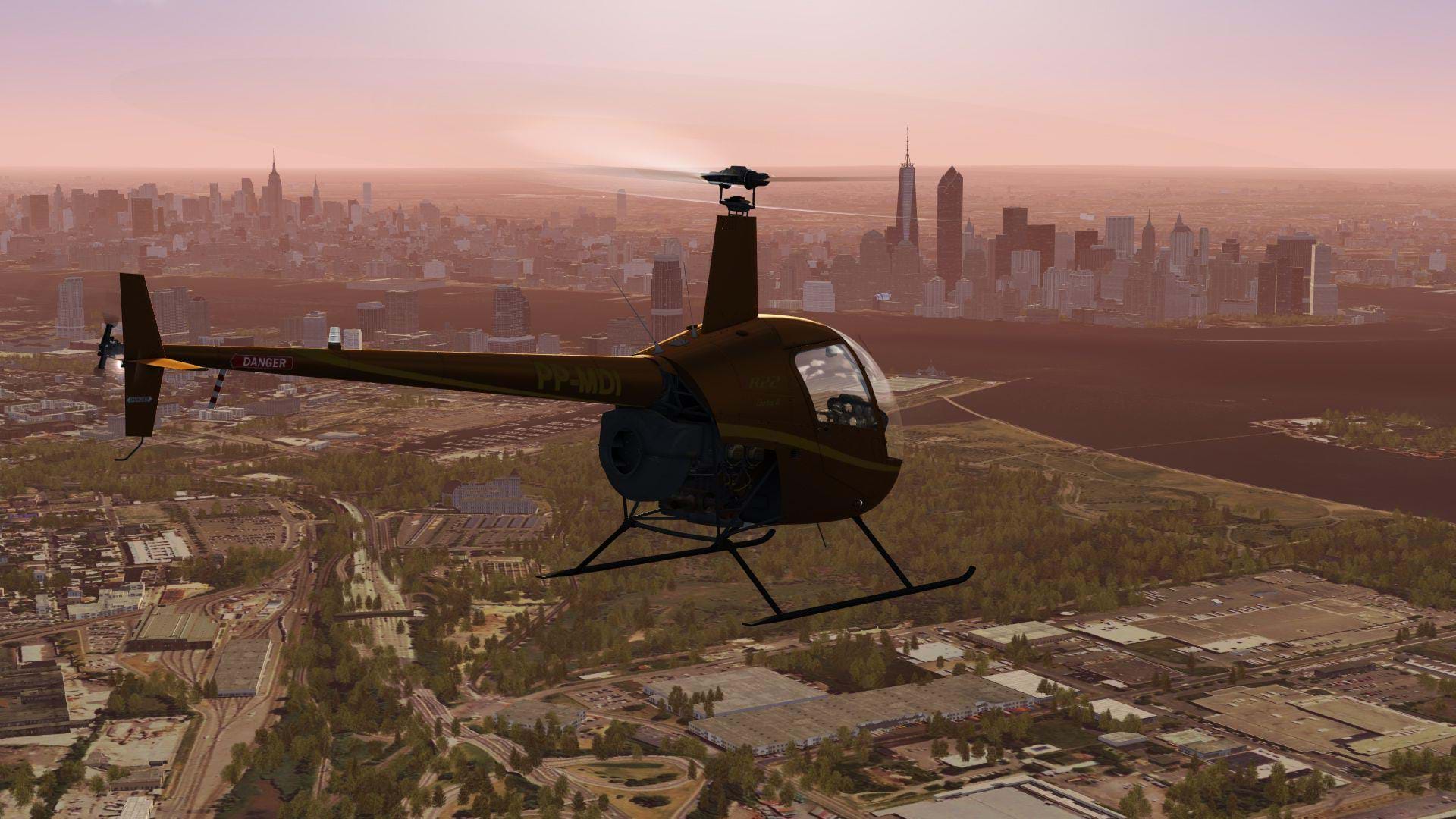 A few months ago, IPACS was very kind as to invite me to meet them in Switzerland to try the R22 and the VRMotion platform. Back then, I tested it with the advanced (or Pro) flight model, which is being developed with the help of Mr. Claude Vuichard.

A few days ago, IPACS sent me a preview copy of the R22 but, this time, with the easy flight model instead of the Pro one.

IPACS will release the R22 with both flight models. The idea being that the easy flight model will allow new simmers to enter the helicopter simulation niche easily and learn the basics easier, with less frustration. Seasoned simmers, or those that want to step up and be challenged (or fly more realistically) can use the Pro flight model. 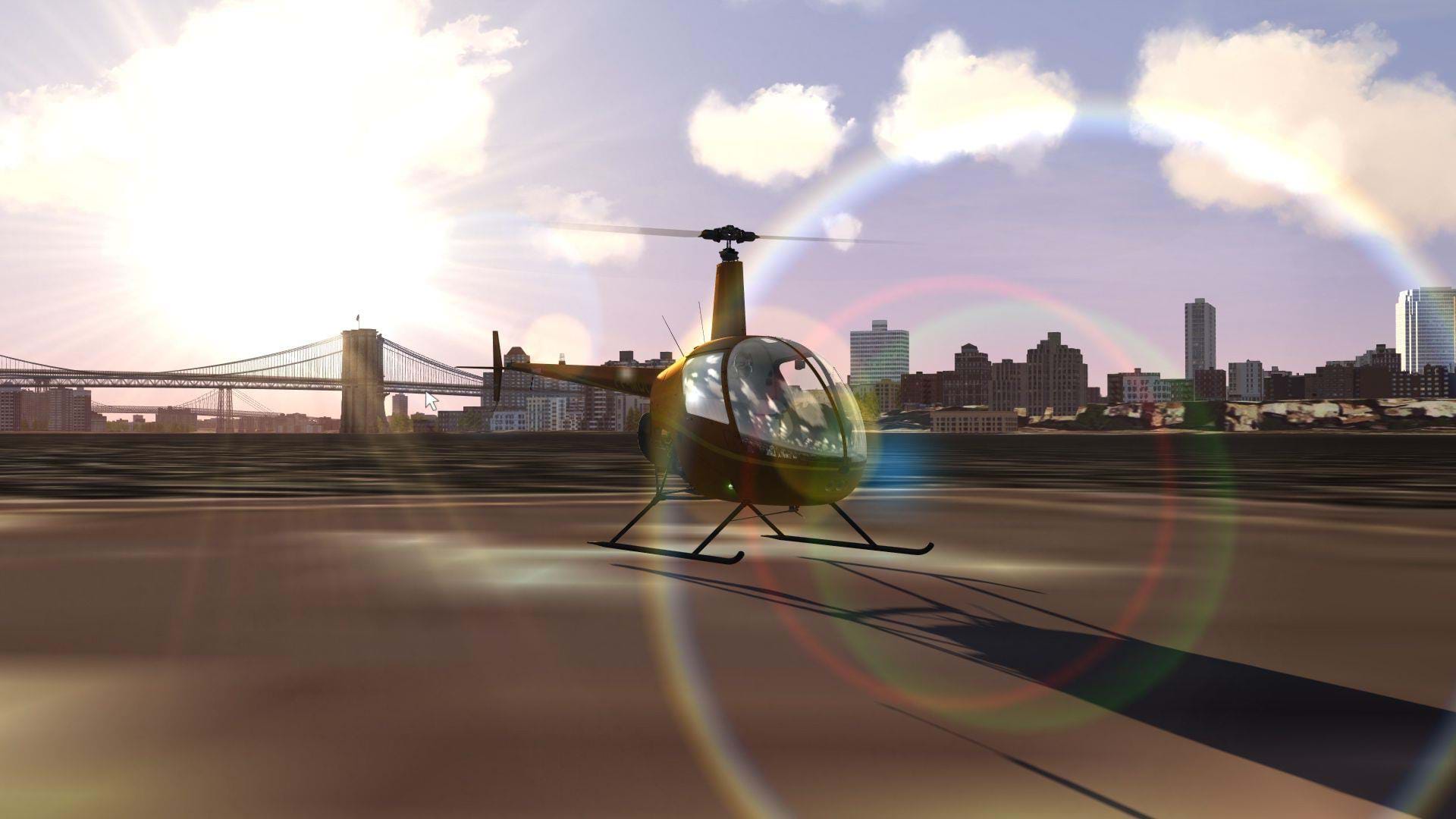 I couldn’t notice any major changes on the model from the previous release, being of high quality and very detailed. Both inside and out, the R22 shines.

The only major change I noticed was the yaw string, which was added (more on that later). It’s, indeed, top notch work. 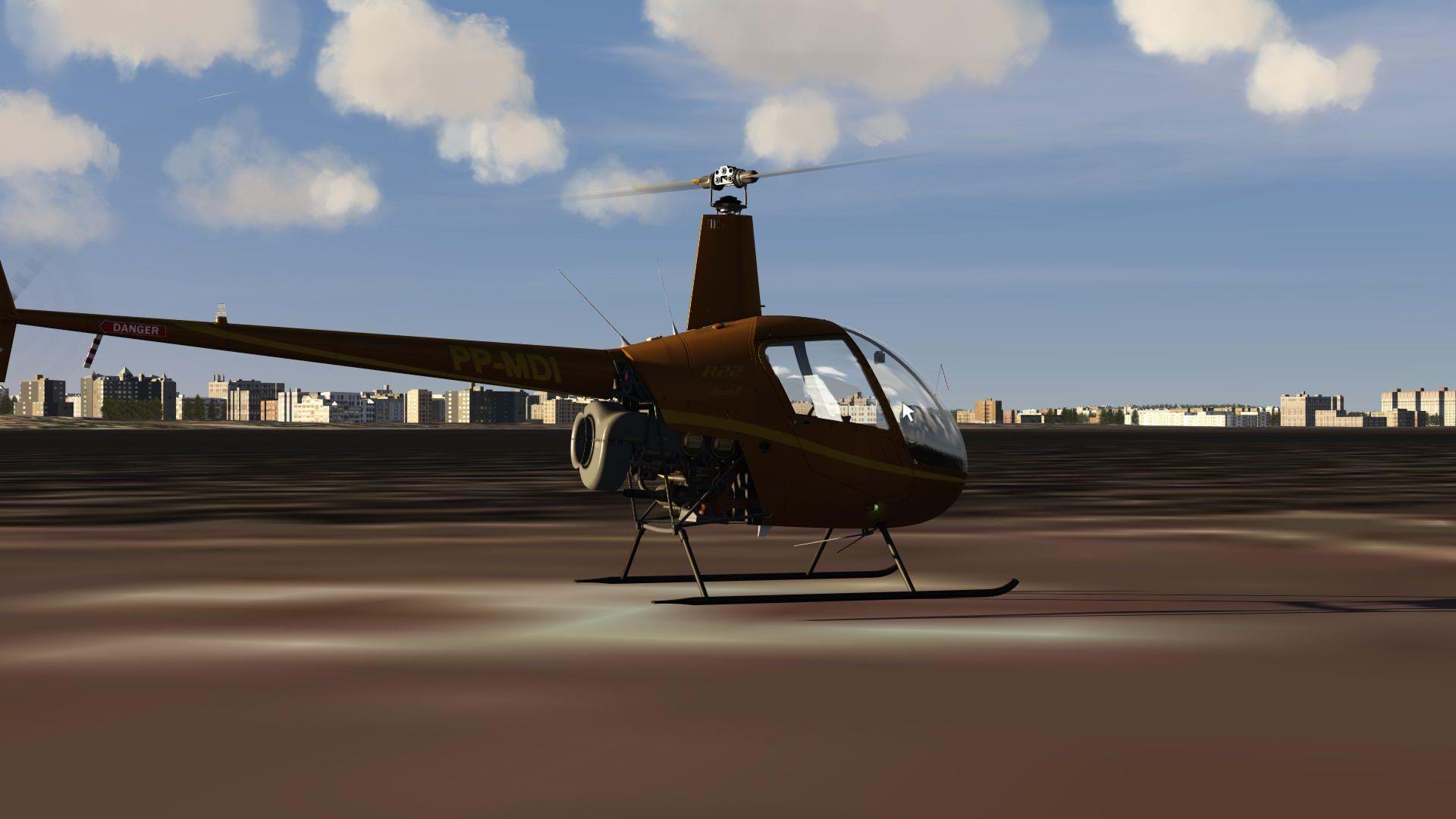 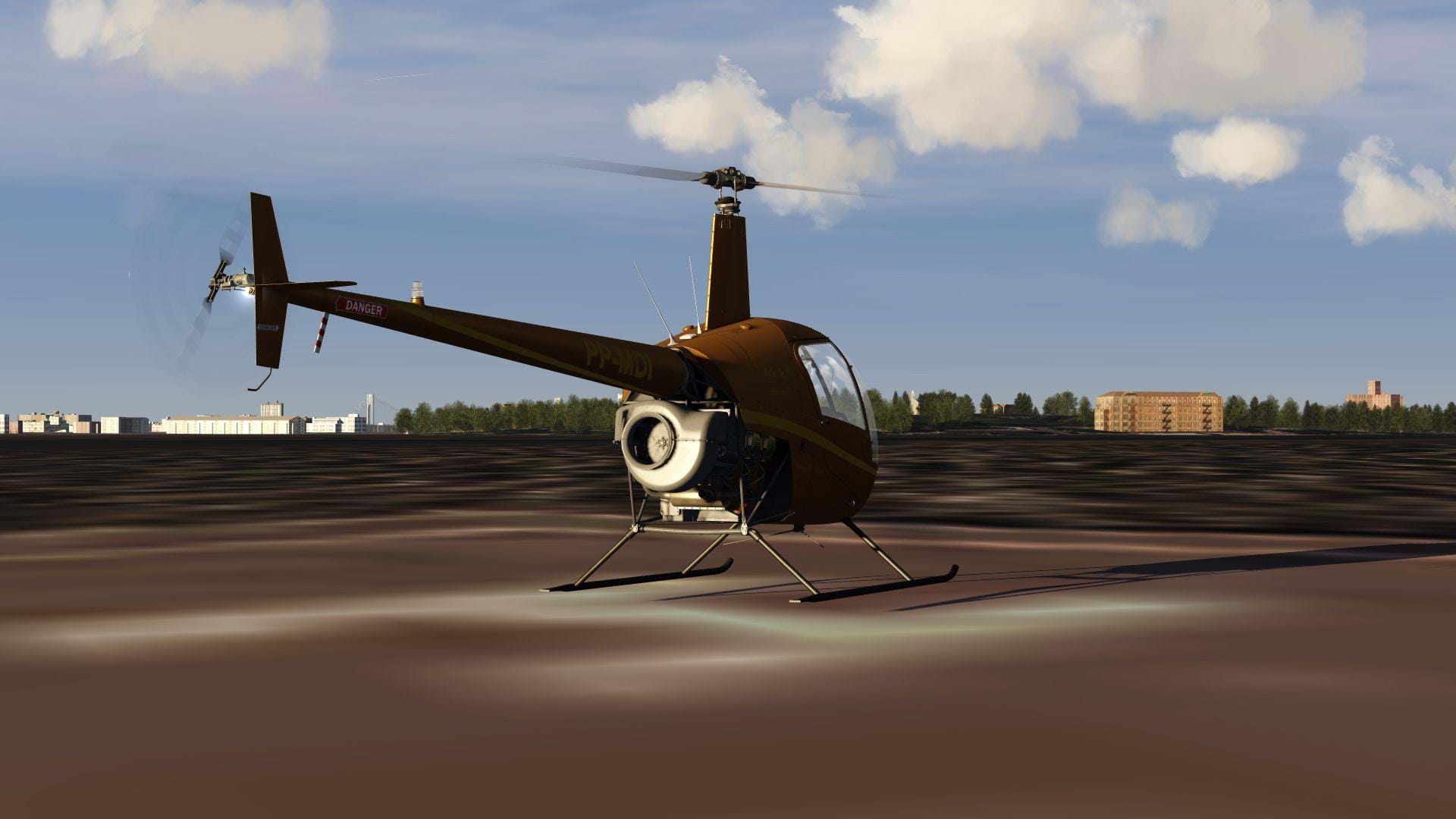 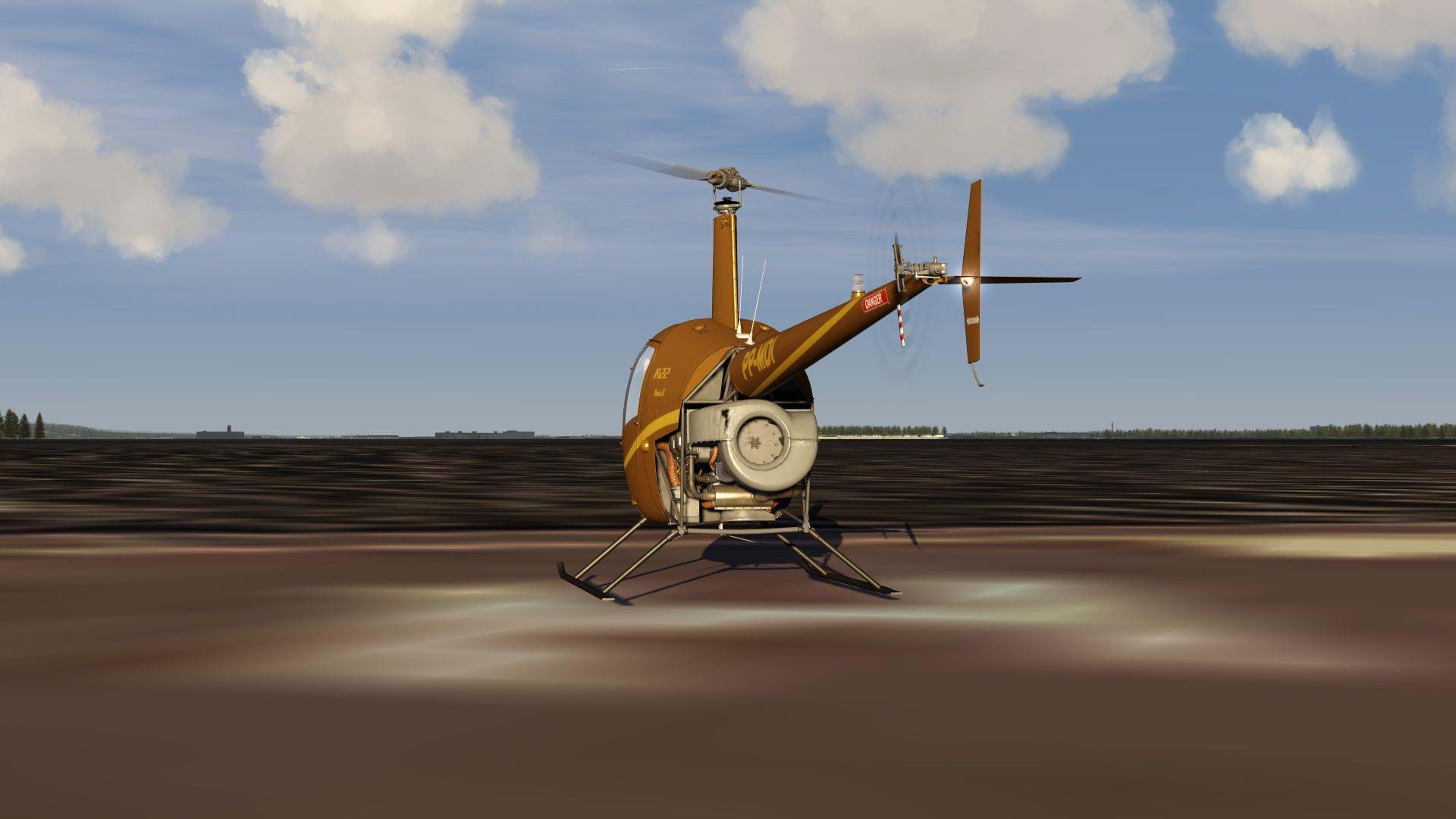 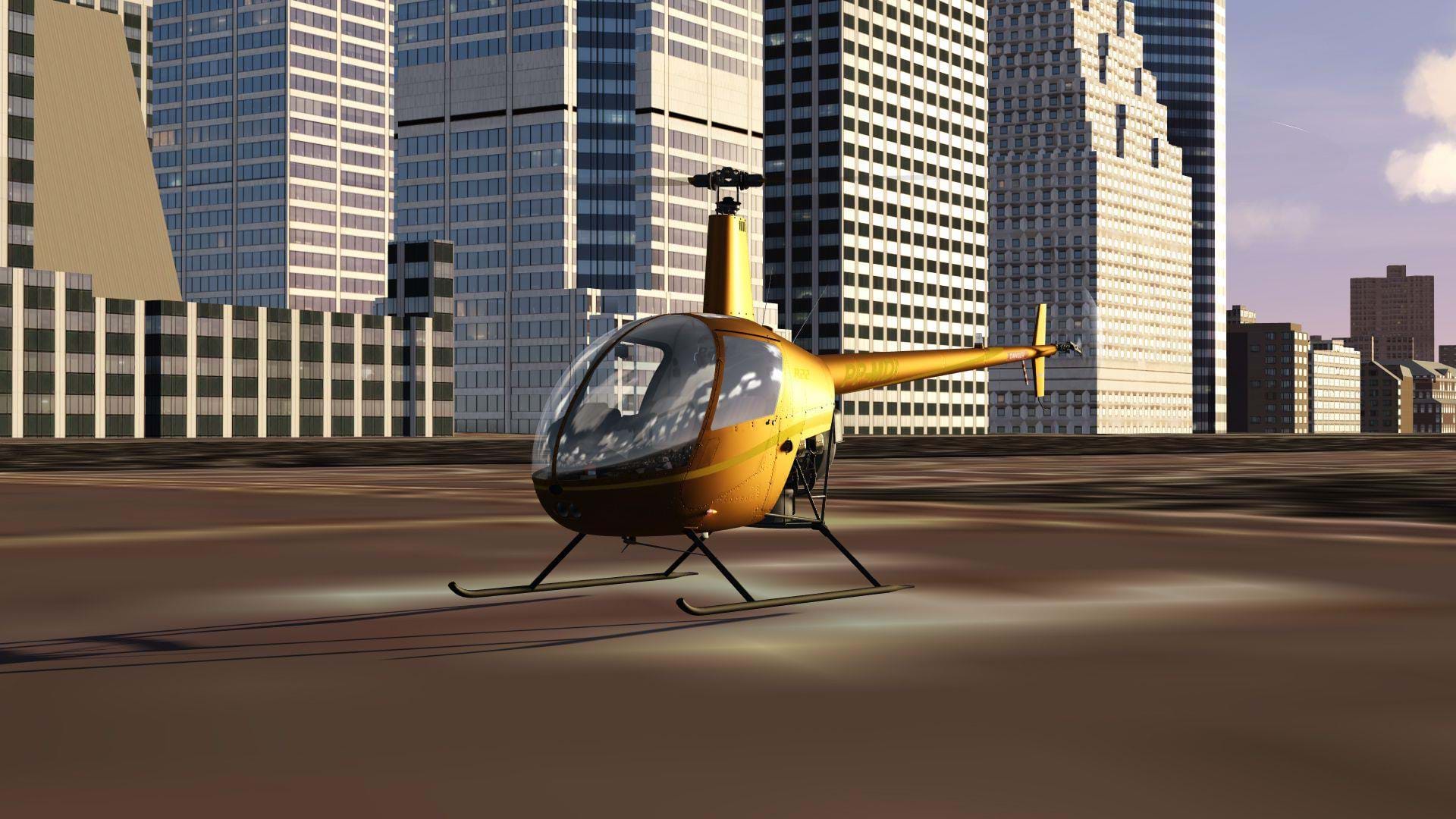 As soon as I got the preview copy, I couldn’t wait to fly it. I really enjoyed it when I tried it a few months ago and was very curious to find any differences.

Selected the R22, entered the sim and pulled the collective. I noticed no major yaw and, when looked down, I saw the pedals moving. That was, obviously, odd for me. I contacted IPACS and they told me the flight model active right now was the easy one with no way to turn the Pro one (yet).

Easy mode it is, then!

In this mode, the R22 is stable and easy to fly. It’s actually very fun and I can see newcomers enjoying it and learning about helicopters and how they fly. The basics, of course.

I flew around NYC for a while, enjoying the trip and testing different conditions. One of the tests I did was an autorotation which, even with the easy flight model, is still challenging. The first time I tried an auto using the Pro flight model I landed too hard so I was expecting the ride to be violent.

I started by allowing RPM to drop a bit too much, so I got it under control and off I went on my merry way to the ground. The landing was as smooth as possible, and I’m convinced it was a survivable one. Awesome! 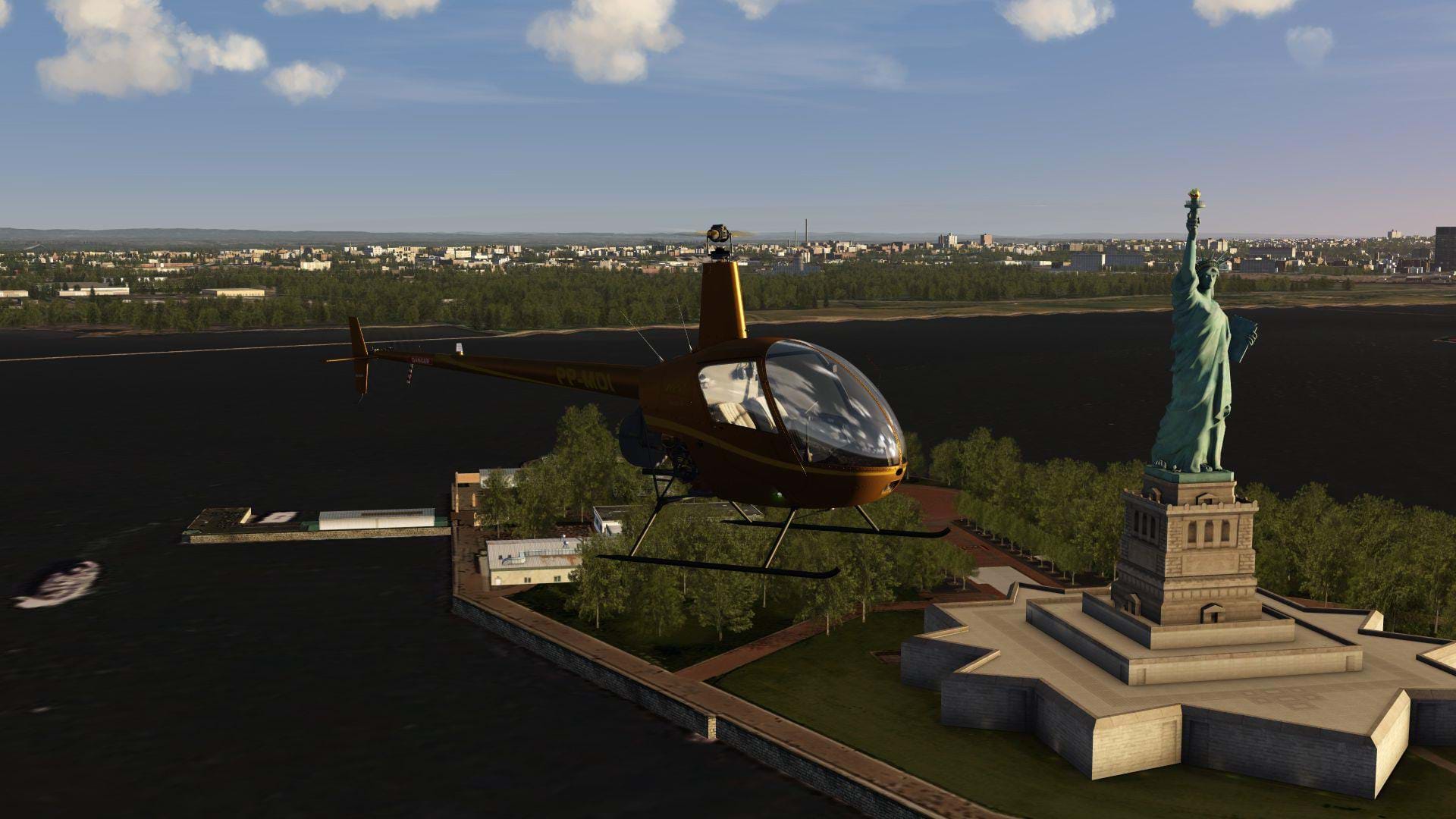 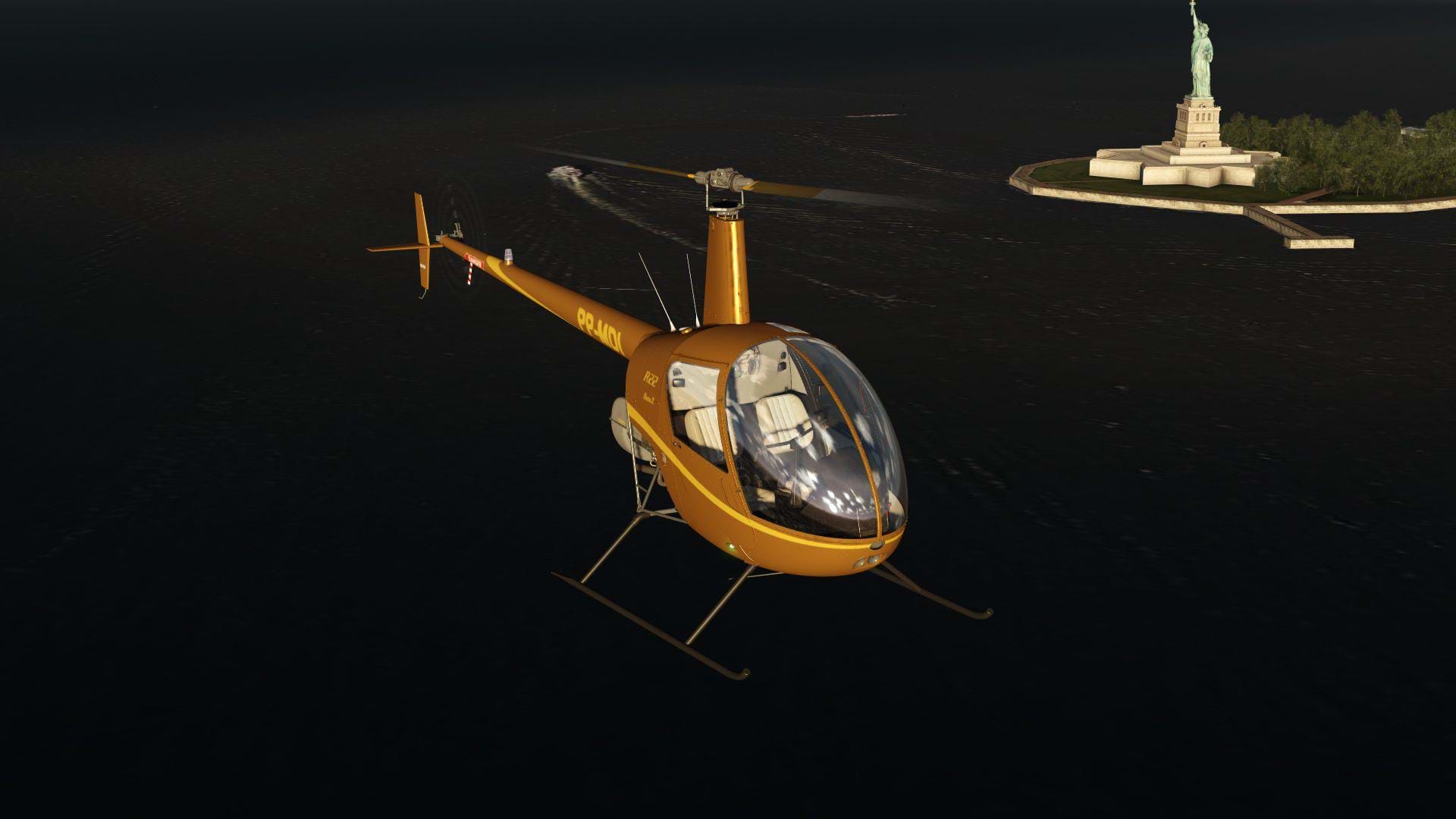 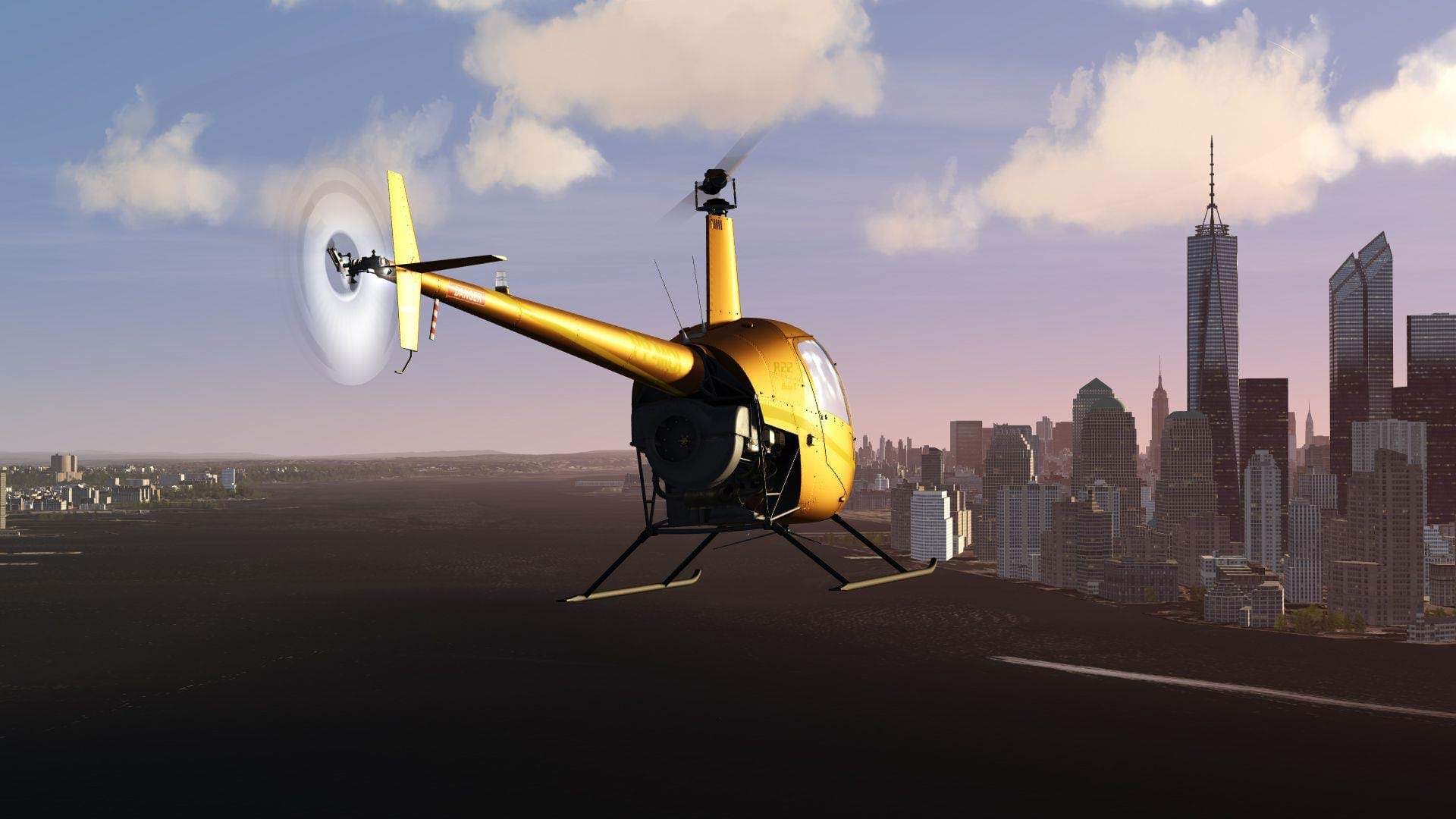 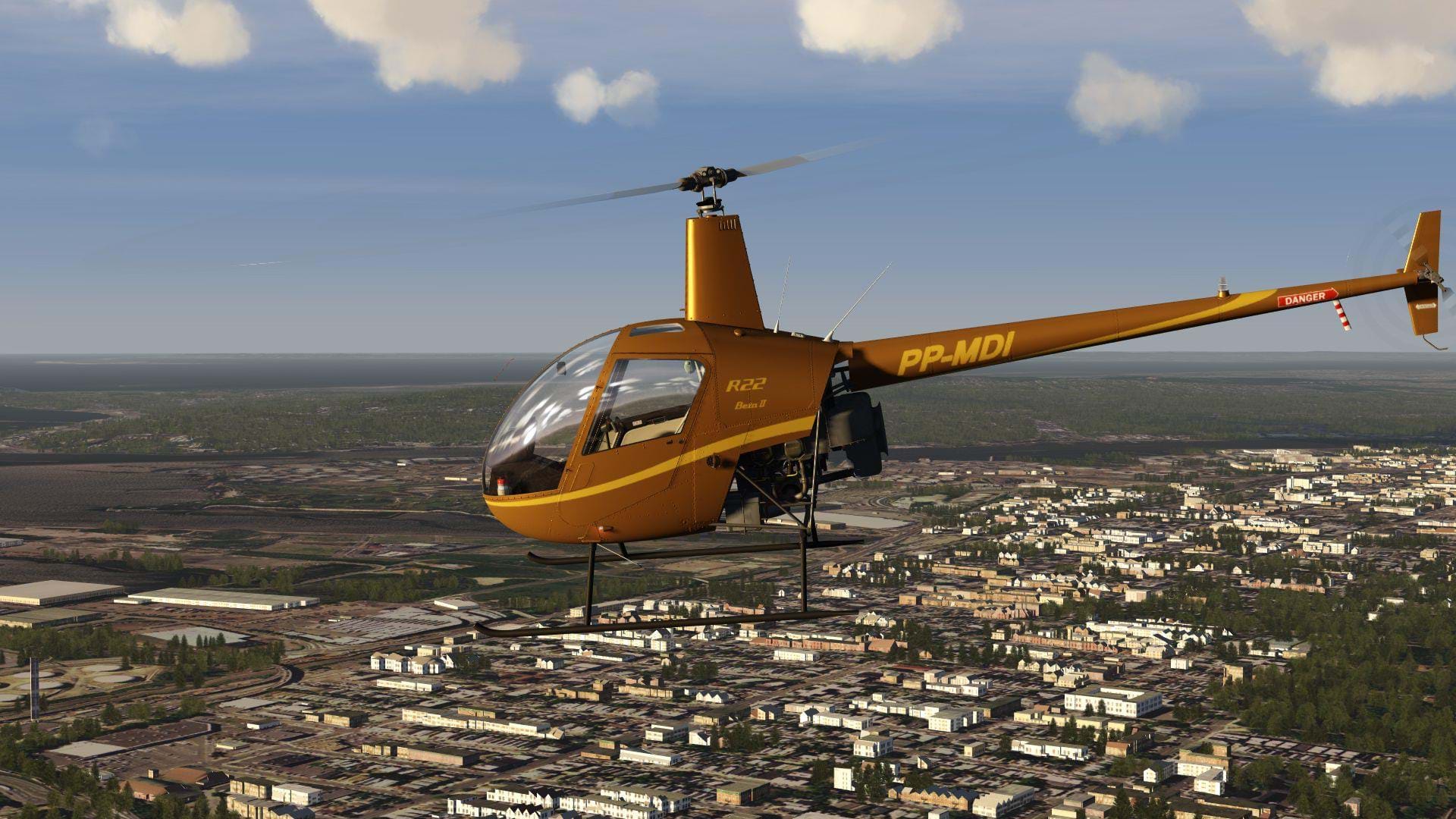 Remember me mentioning the yaw string? That thing is insane.

I’ve seen yaw strings on other sims before but the one in the R22 is impressive. IPACS told me their programmer spent a whole week working on it and it shows. I love the result. Screenshots don’t make it justice. You have to see that thing moving.

Yes, it’s a small detail, but makes such a big difference and shows just how much IPACS is paying attention to detail and want to get things working properly in helicopters.

For a lot of users out there, the easy flight model might look like a waste of resources. As it may be the fact that we are getting yet another R22 (we have enough of those on other sims, right?).

But the thing is that the R22 is not only an amazing trainer – known by thousands of helicopter pilots around the world – but it’s also a simple design. A single piston-engine helicopter with steam gauges and no complex systems.

Granted, an S300 could be a similar – and also interesting helicopter to add – contender and I would like to see it in AFS2 as well but I guess IPACS had to make a decision and they went with what they thought would make better sense for them.

IPACS is trying to cater both spectrums of the helicopter flight simulation community: the newcomer and the veterans. Some may argue that, in real life, you are not given an “easy mode” R22 to start learning how to fly helicopters. But you are not given a consumer-market joystick (perhaps with a twist grip for pedals) and an aircraft throttle, which is the setup most of the simmers out there have.

In real life, you also get better view (all around you) with perfect resolution and you have the physical sensation.

All this makes sims harder to “fly” than the real thing. Toning helicopters down a bit so folks get used to the controls and helicopters is a great way for people to get their feet wet.

This might help bringing new people to our hobby and I can only see that as hugely positive. 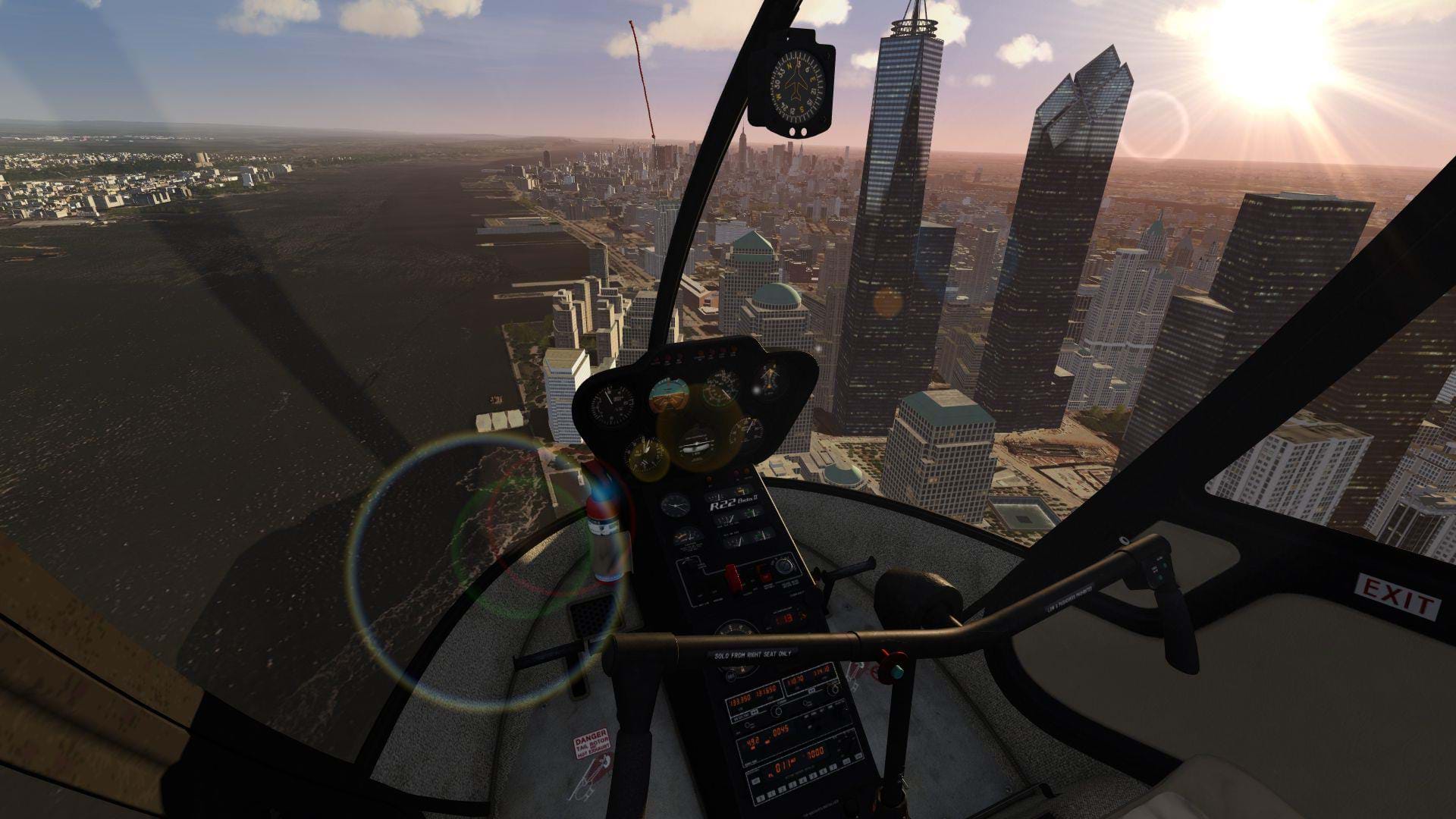 AFS2 is amazing in VR. IPACS did a great job and, with the Vulkan API (which is now available as beta in the sim – you need to activate it on the settings menu) makes it even better and more fluid.

Granted, AFS2 does lack quite a few FPS-heavy features such as traffic, realistic water and other GPU-intensive stuff that will, eventually, drop FPS when they are implemented. But, right now, it’s one of the best VR experiences you can have on a sim. 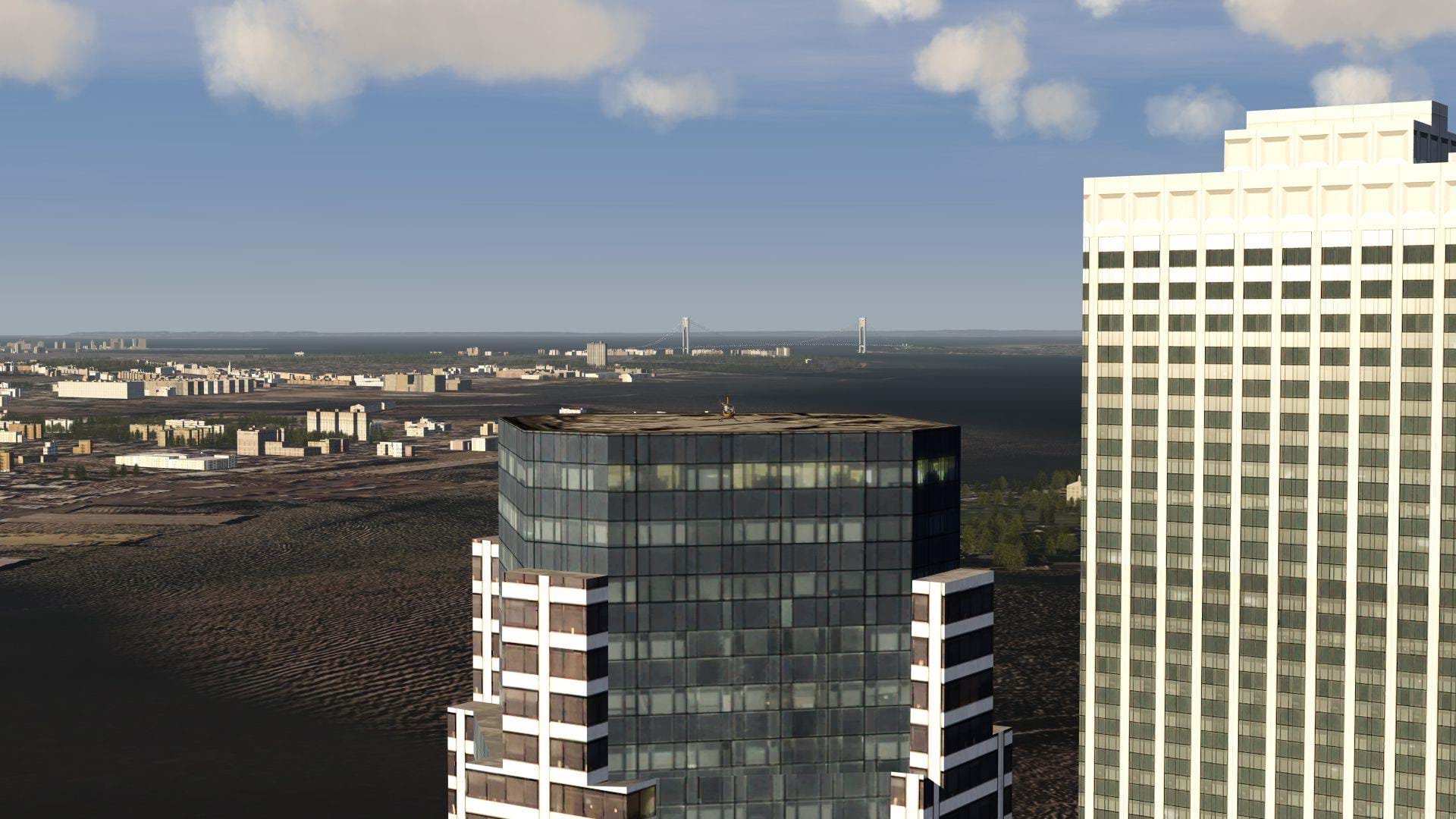 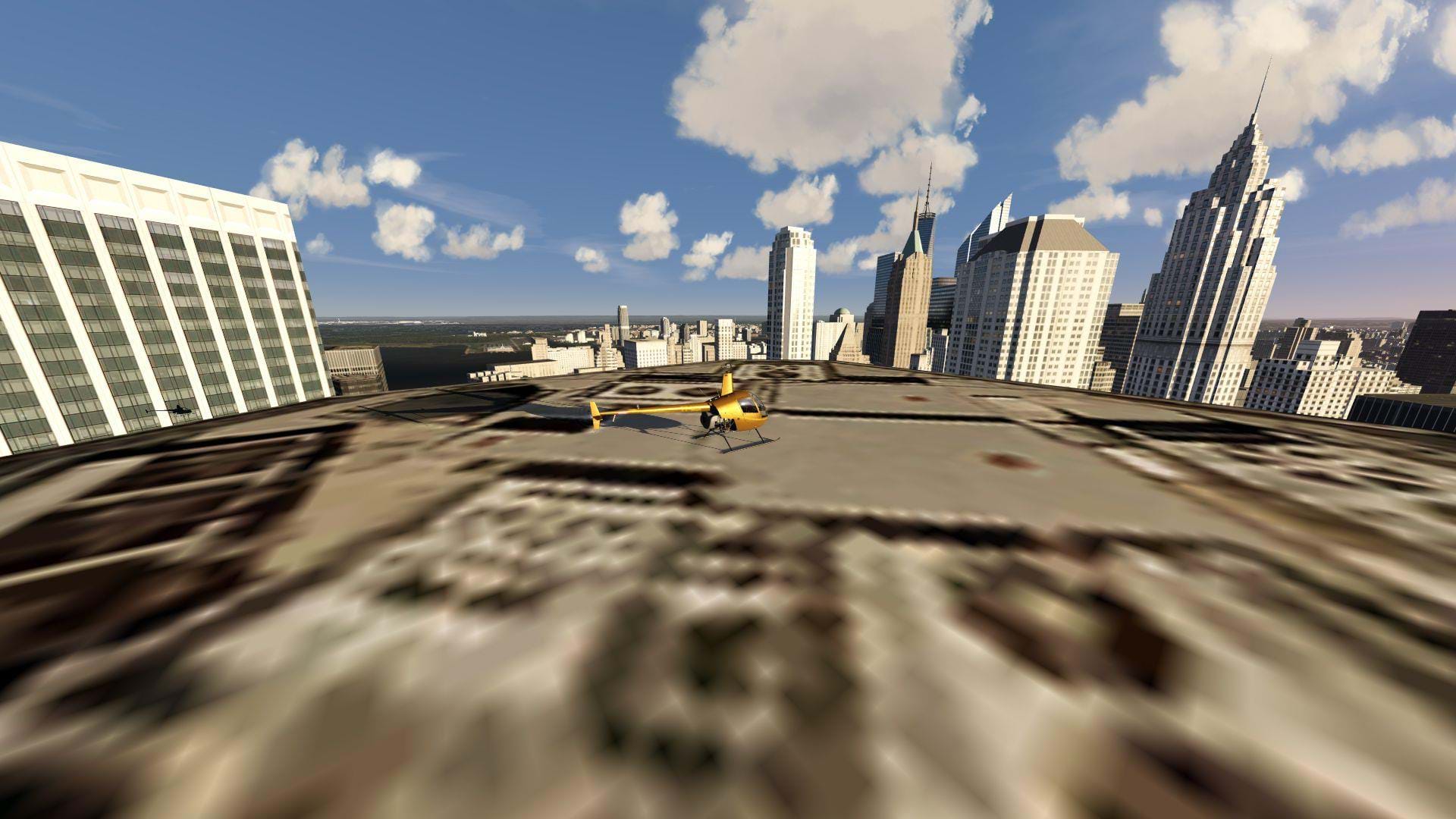 Great looking 3D model, good flight model (with the Pro version still being worked on), the ability to land on rooftops (oh yeah) and amazing scenery coming from ORBX.

IPACS AFS2 is not a complete sim yet but it’s moving at a steady pace towards it. Right now, the important milestone of adding a helicopter is being met and that’s a huge, huge step on my book.

They listened to us and went above and beyond. They are not only adding a helicopter, but also making it accessible to newcomers or casual simmers – without compromising what hardcore rotorheads crave for.

I am eagerly waiting for the next version and the Pro flight model. It was very nice already when I tried it before. It can only be better now, right?