Eagle dynamics recently updated their 2.x branch with the release of 2.0.4 and a major update to the Nevada Test and Training Range Map for DCS. Joe took another look at it.

Way back in 2016, we did a review of the DCS Nevada National Test and Training Range for DCS 2.0, you can read it here if you haven’t seen it already.

One of my complaints about his terrain was that there were only 4 airports available, McCarran International (KLAS), Nellis AFB (KLSV), Creech AFB (KINS), and Groom Lake test facility. Here’s what I said back in May of 2016.

“One airport is conspicuously missing from the line up, and that is North Las Vegas Airport (KVGT). It’s about 8 miles or so North West of McCarran Int. The omission of KVGT might be because this is terrain is still in Alpha, or because Eagle Dynamics made a calculated decision to leave it out. Why leave out an entire airport? Well if you look at it from the developer’s point of view KVGT isn’t very useful to their user base. DCS has what is arguably the best helicopter flight dynamics on the market for home use. But don’t forget, DCS at its core, a simulation geared toward the Fast Mover crowd. Fighter jets have little use for a general aviation airport, and in some cases, depending on their weight and landing gear configuration, are prohibited from using the taxiways of smaller airfields. So, spending a lot of time, energy and money to create a highly detailed airport most of your users probably won’t use doesn’t make a lot of sense. Boulder City Municipal Airport is also missing, I suspect for the same reasons.

Perhaps the final version of the Nevada NTTR terrain will include North Las Vegas airport, and I hope it does. But, don’t be surprised if it doesn’t make the cut.”

Well, it looks like I didn’t give the Staff at Eagle Dynamics enough credit, and was a bit overly pessimistic.

For those of you who already have the NTTR scenery, you’re already aware that ED has added more than just North Las Vegas, and Boulder City Airports. For those of you who haven’t check out this visually rich scenery yet, Eagle dynamics have added 13, yes, 13, new airports to their southern Nevada scenery. Here is list of all of the new destinations available in the DCS NTTR scenery listed from south to north. 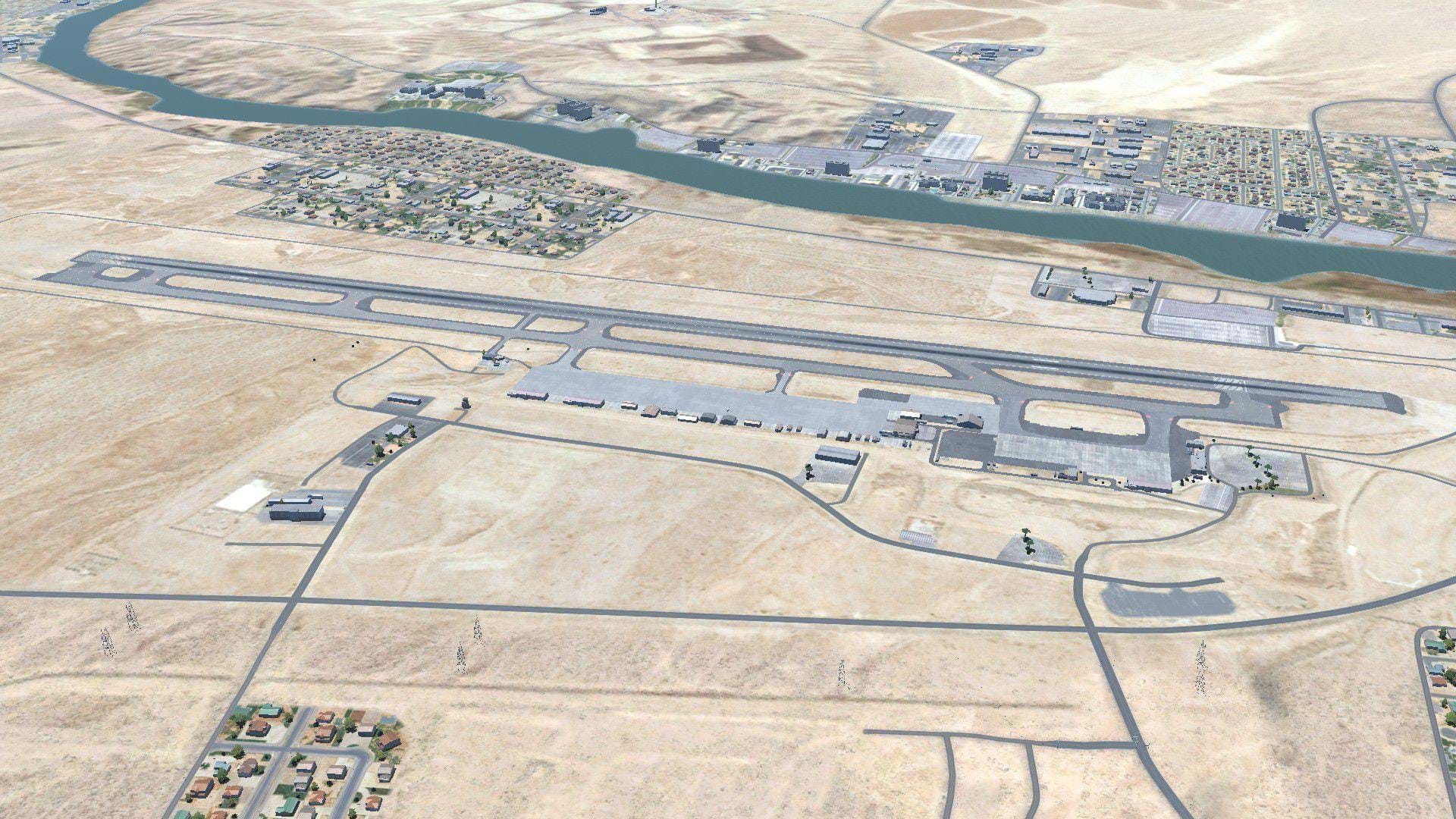 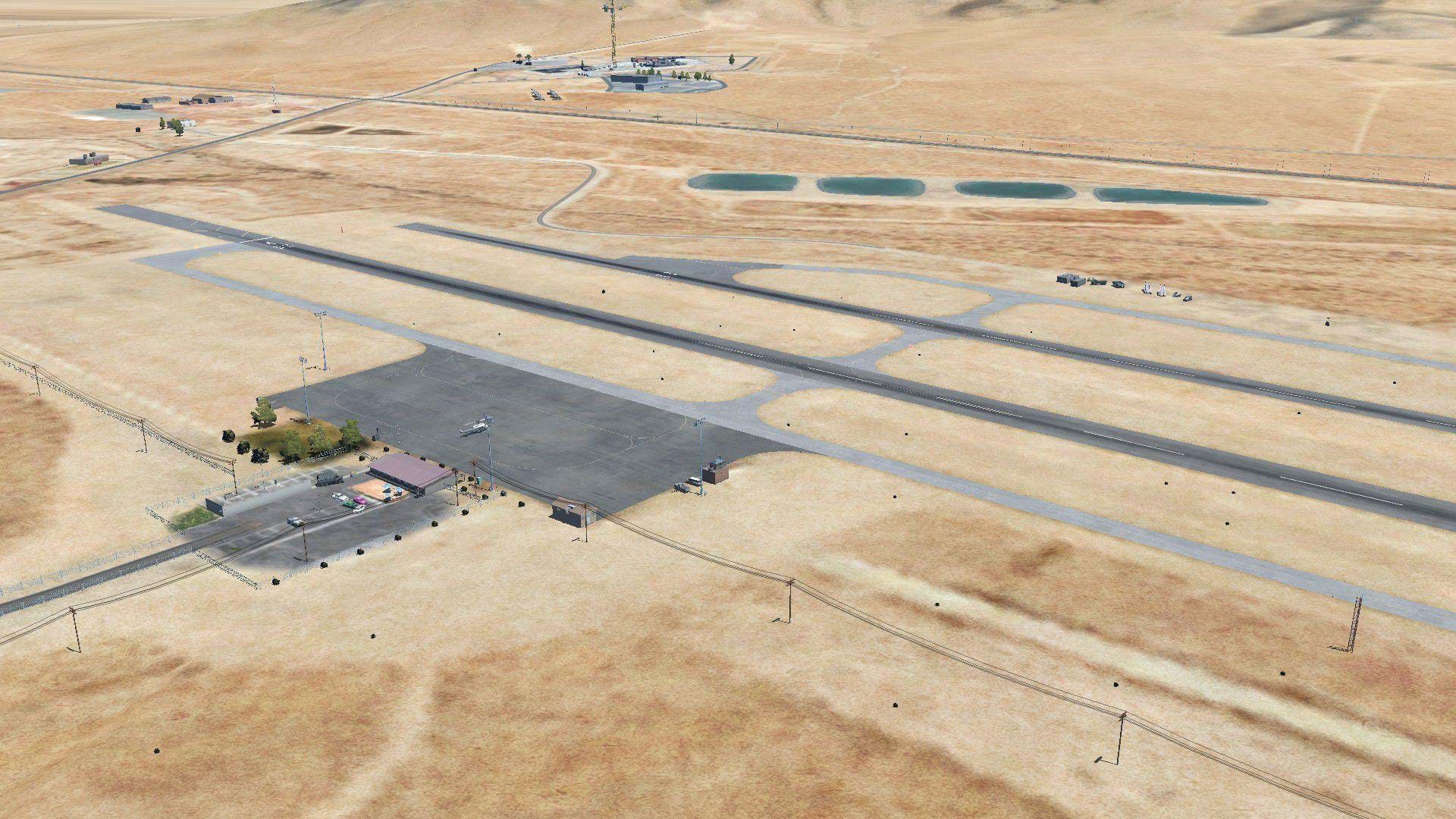 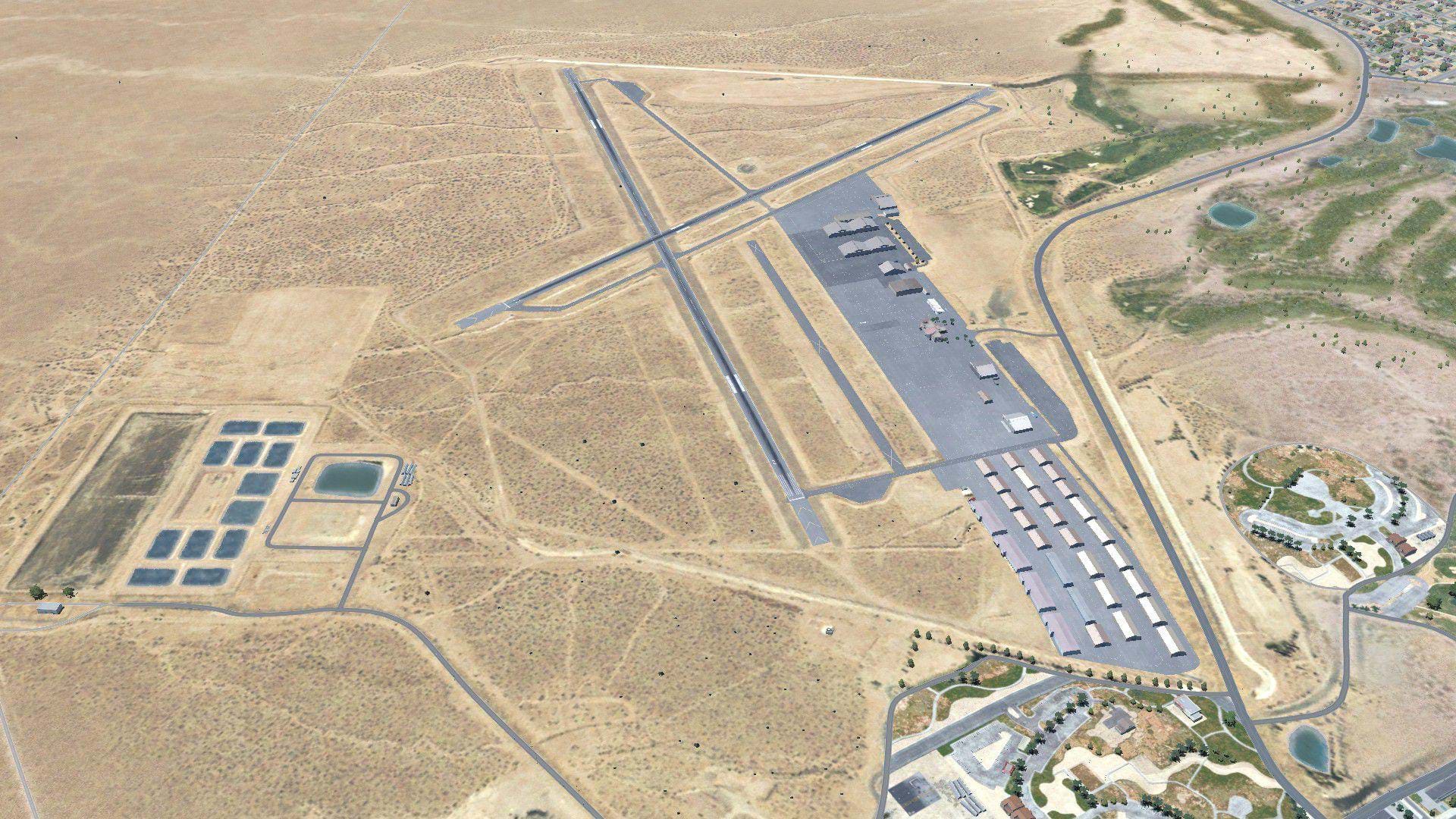 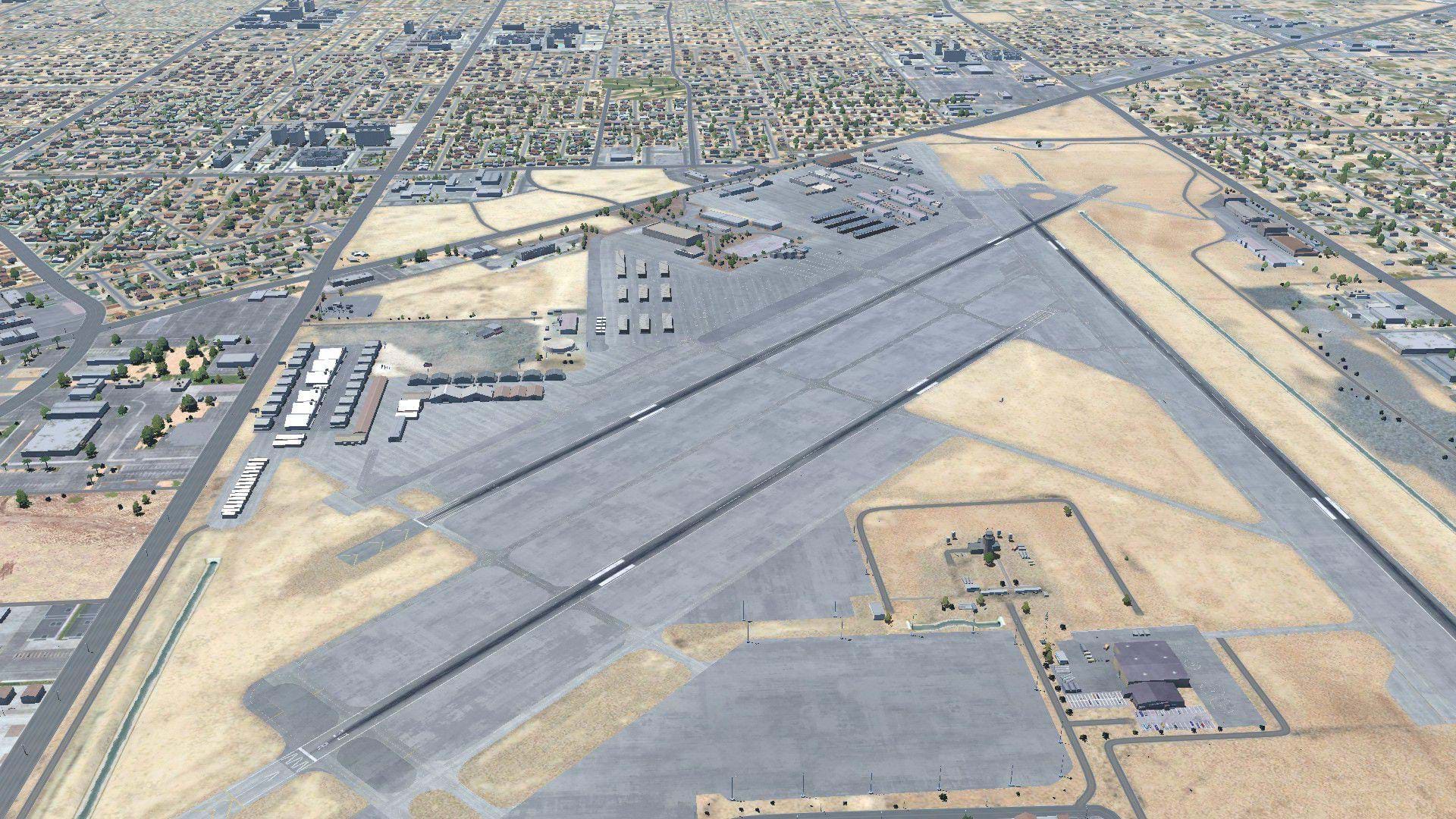 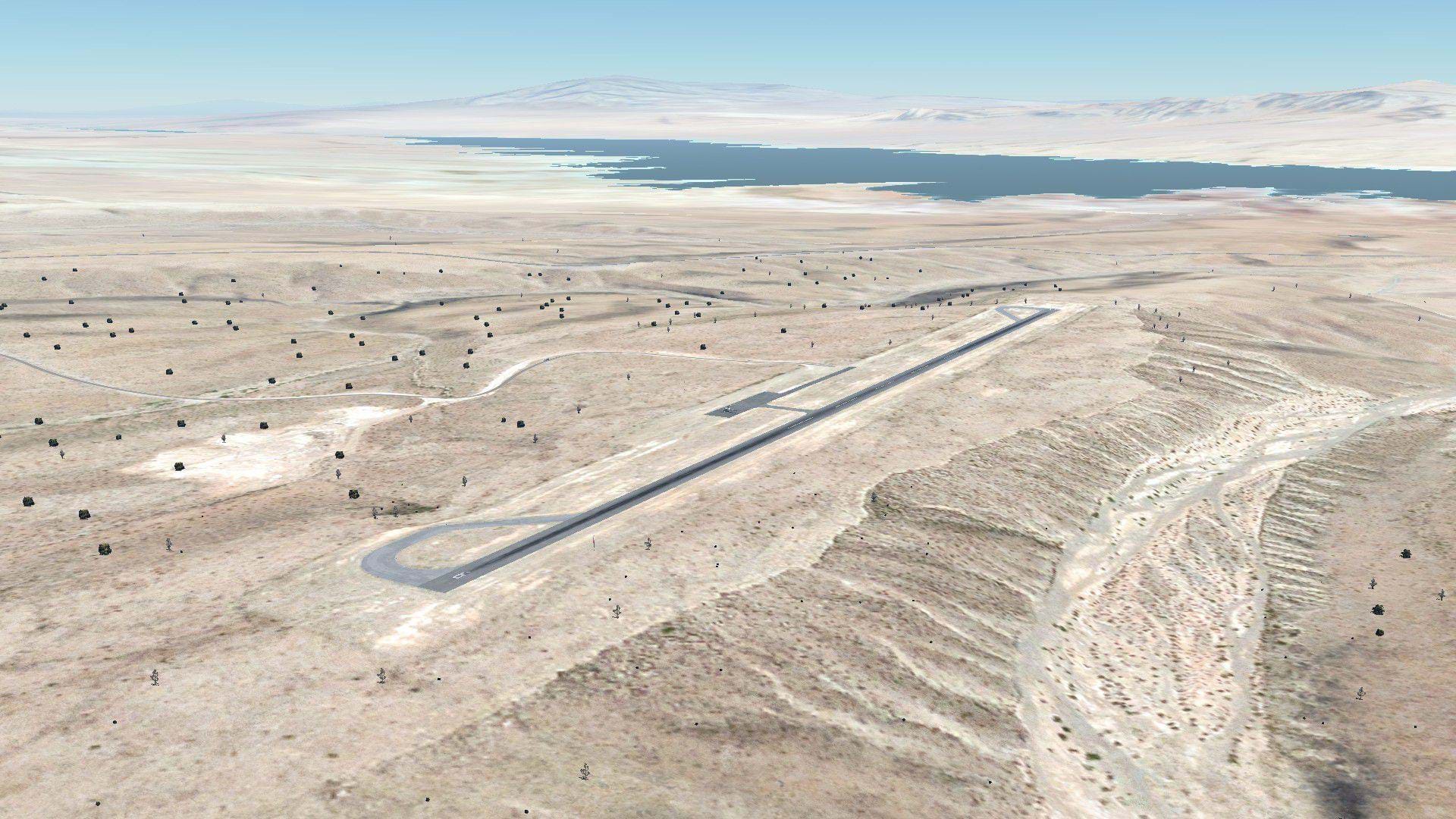 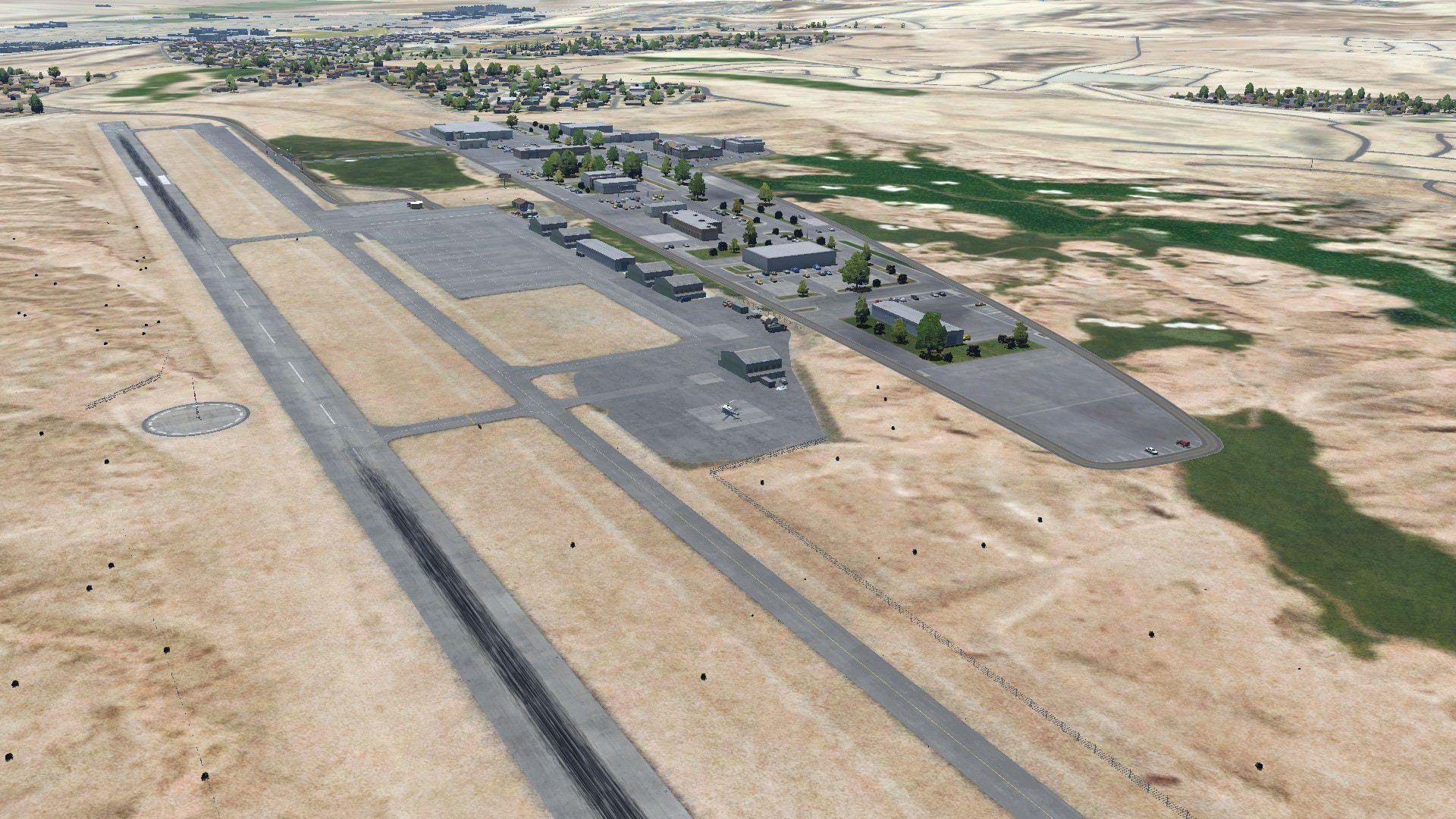 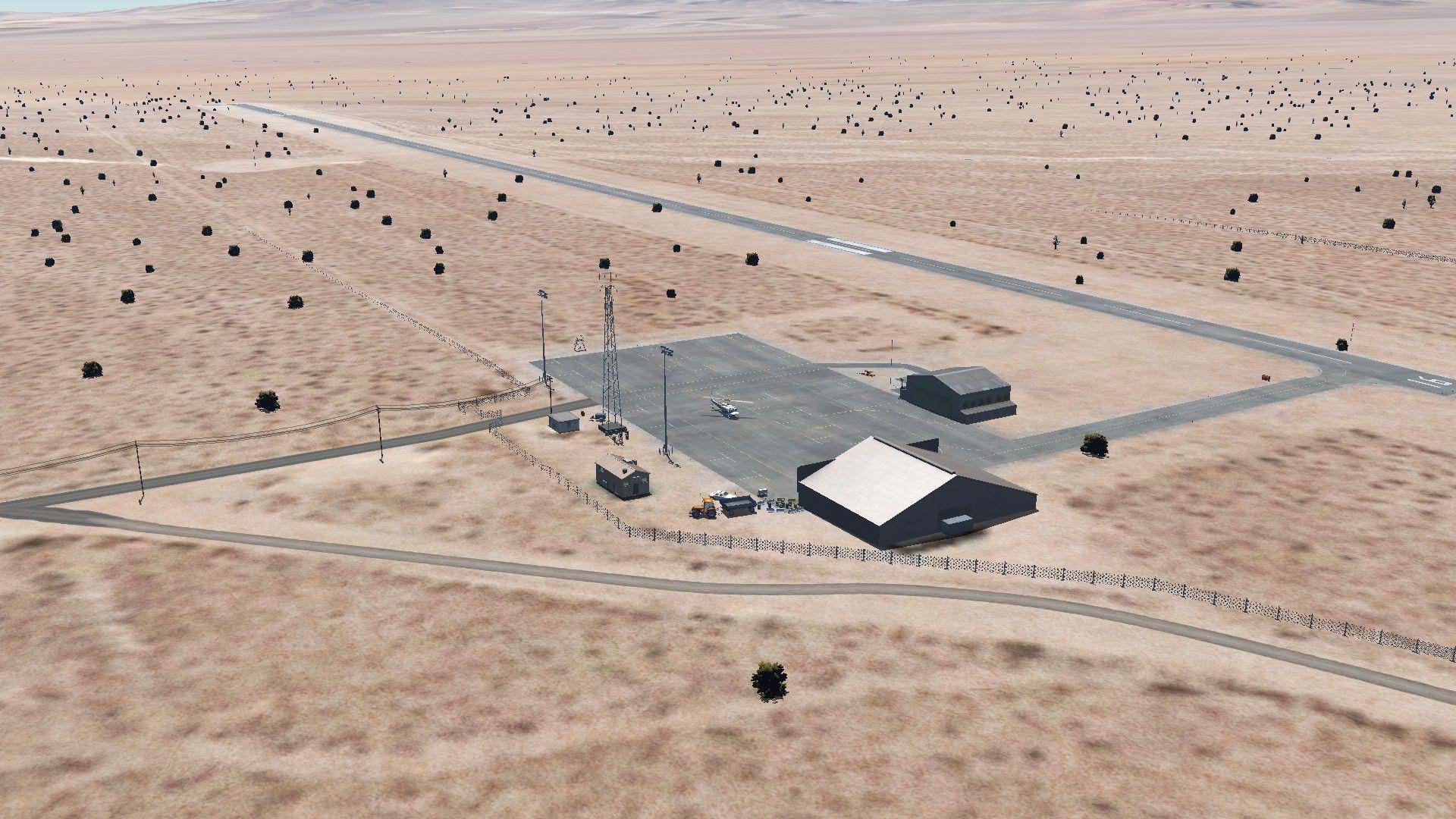 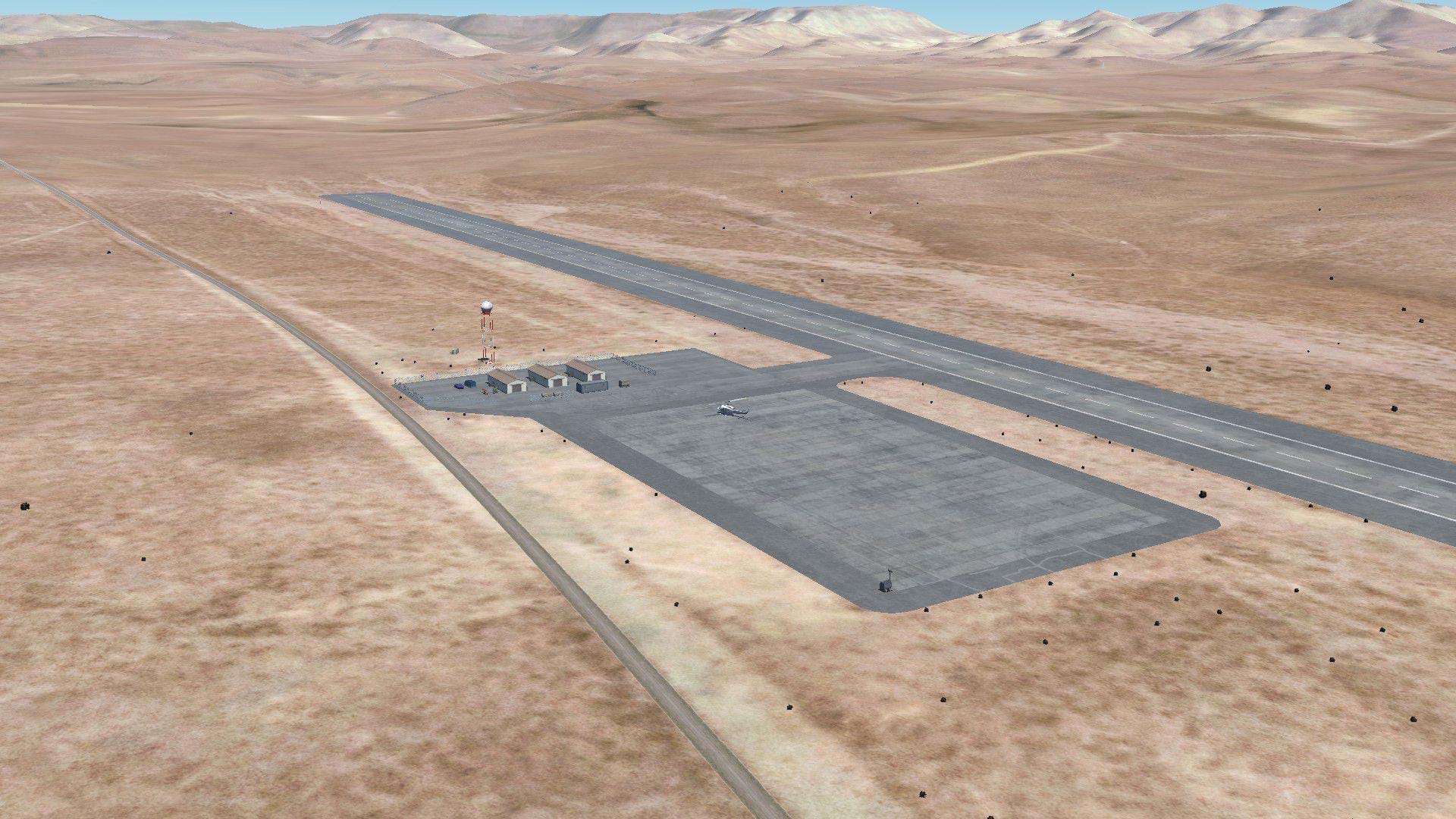 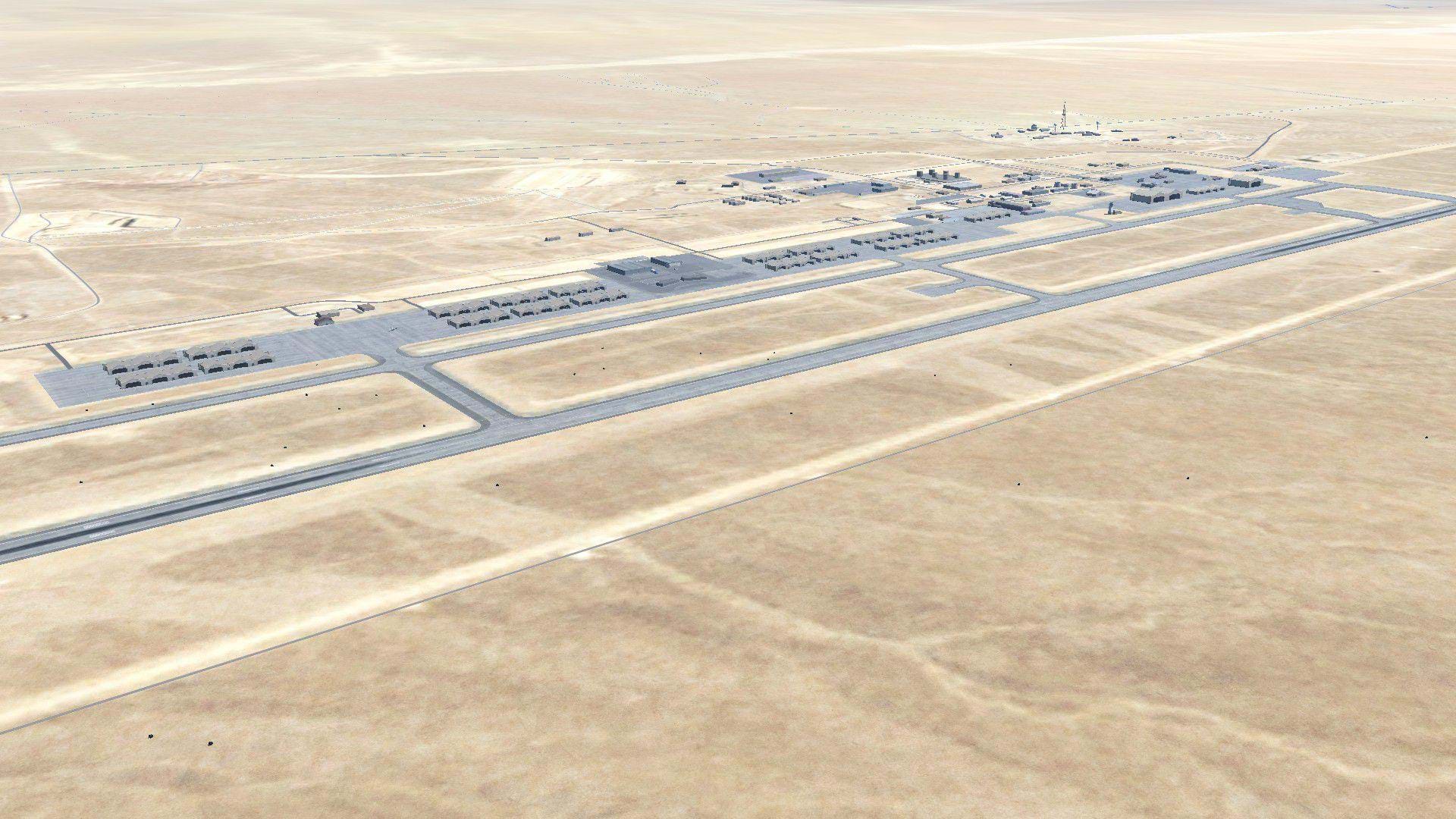 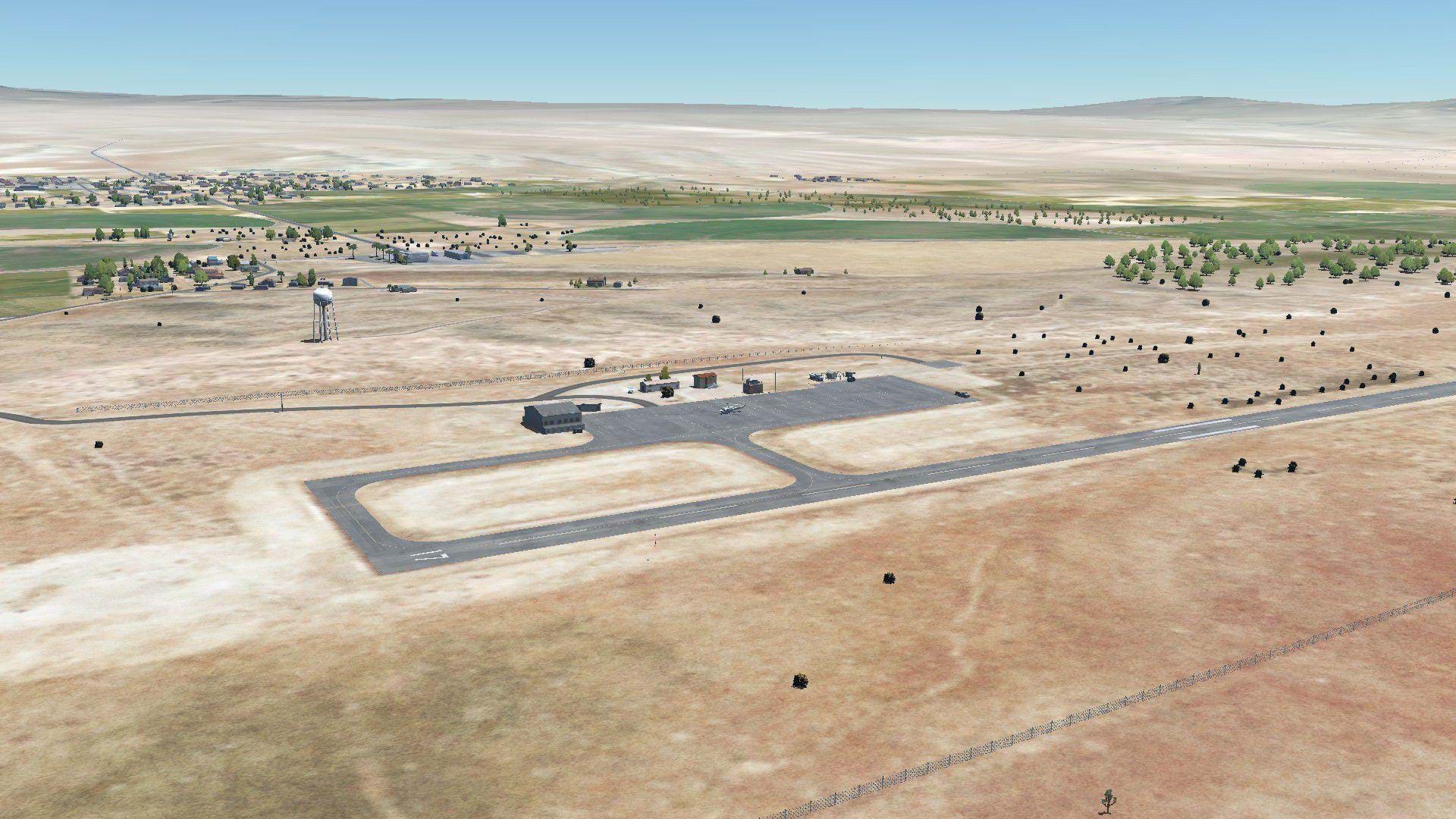 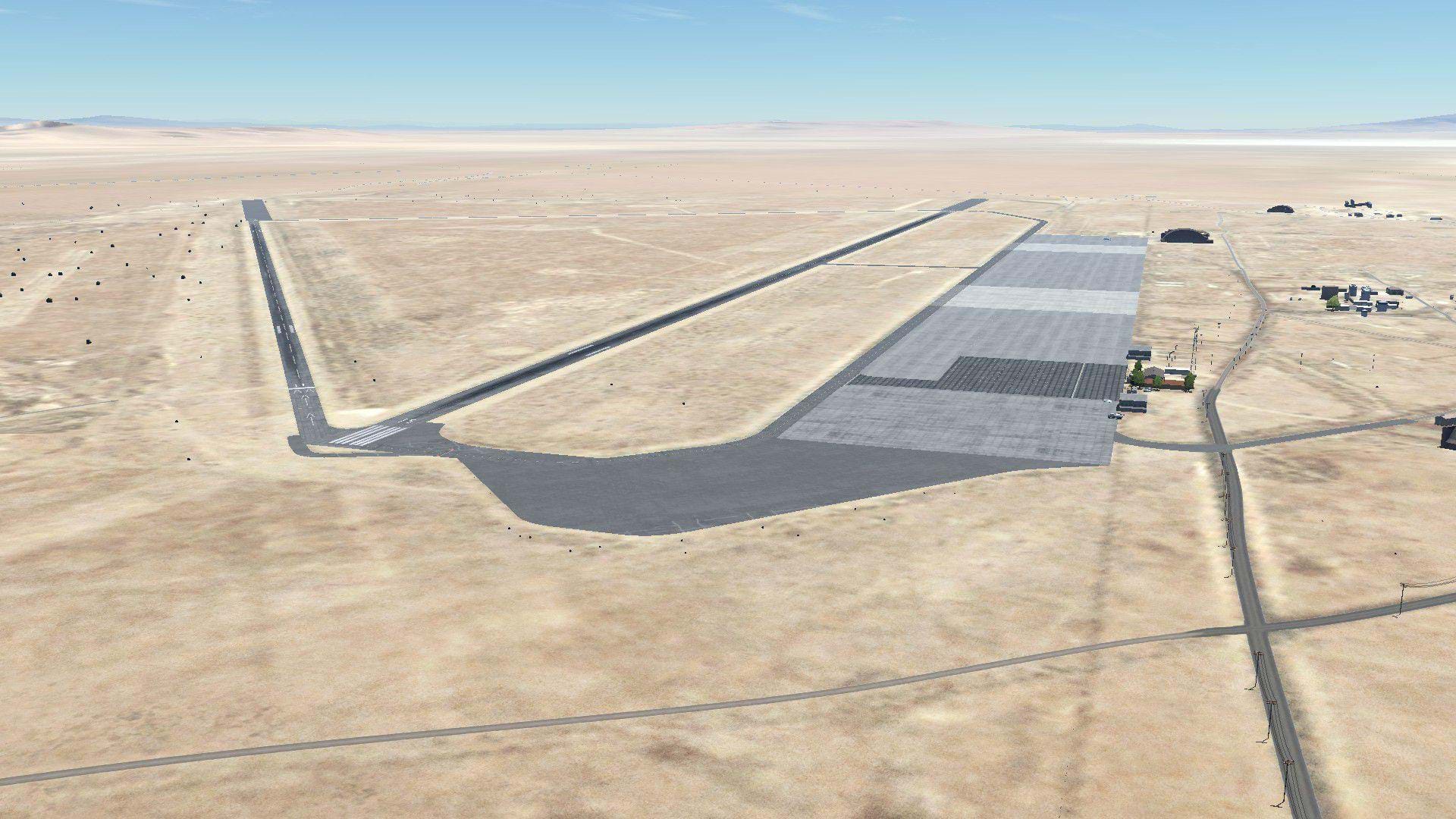 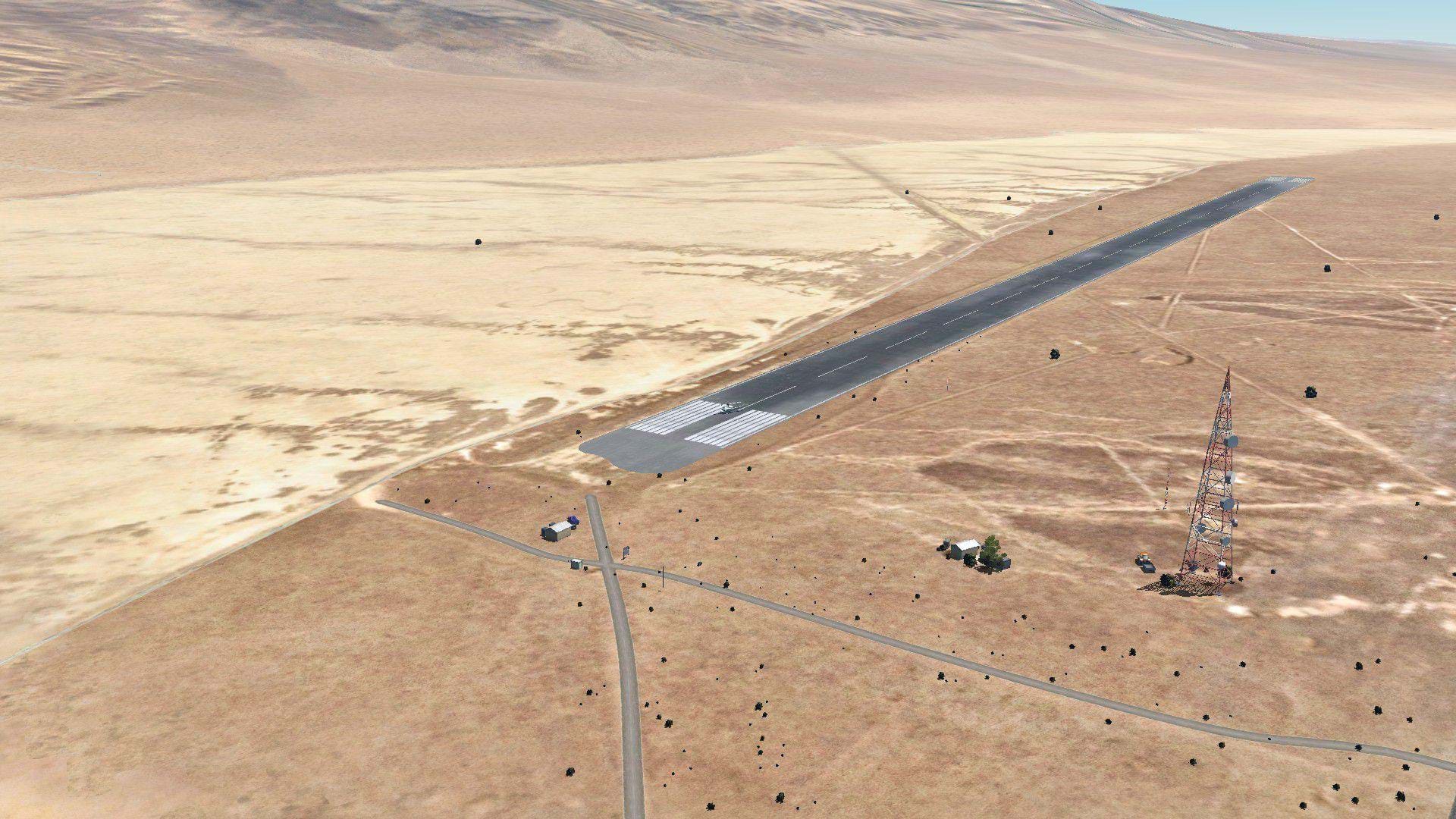 Like I said before, if you already have this terrain module from DCS, chances are you’ve updated it and are already enjoying these new airports. If you haven’t updated DCS 2.0 in a while, all you have to do is run the automatic updater when you launch the program.

The runway and taxiway layouts of all of these airports appear to be accurate. I admit, I didn’t scrub each one against their corresponding Airfield diagram, but they all look pretty good. The new airports feature a mix of new custom made buildings, as well as some reused models from the airports available at the initial release. North Las Vegas, Henderson Executive and Boulder City are the best examples of this. Each of these airports feature custom made Terminals, and in Henderson Executives case, custom buildings as well. 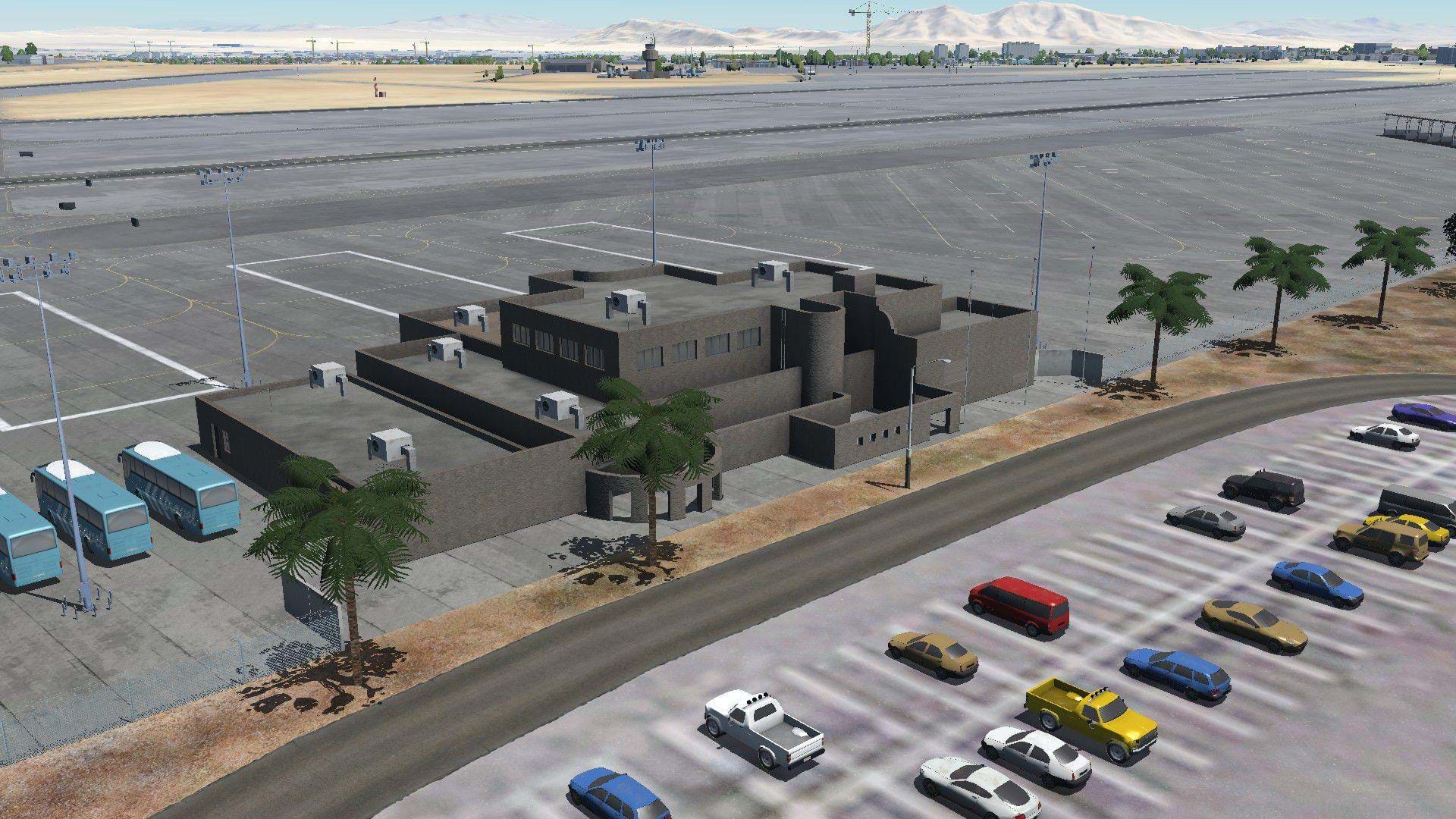 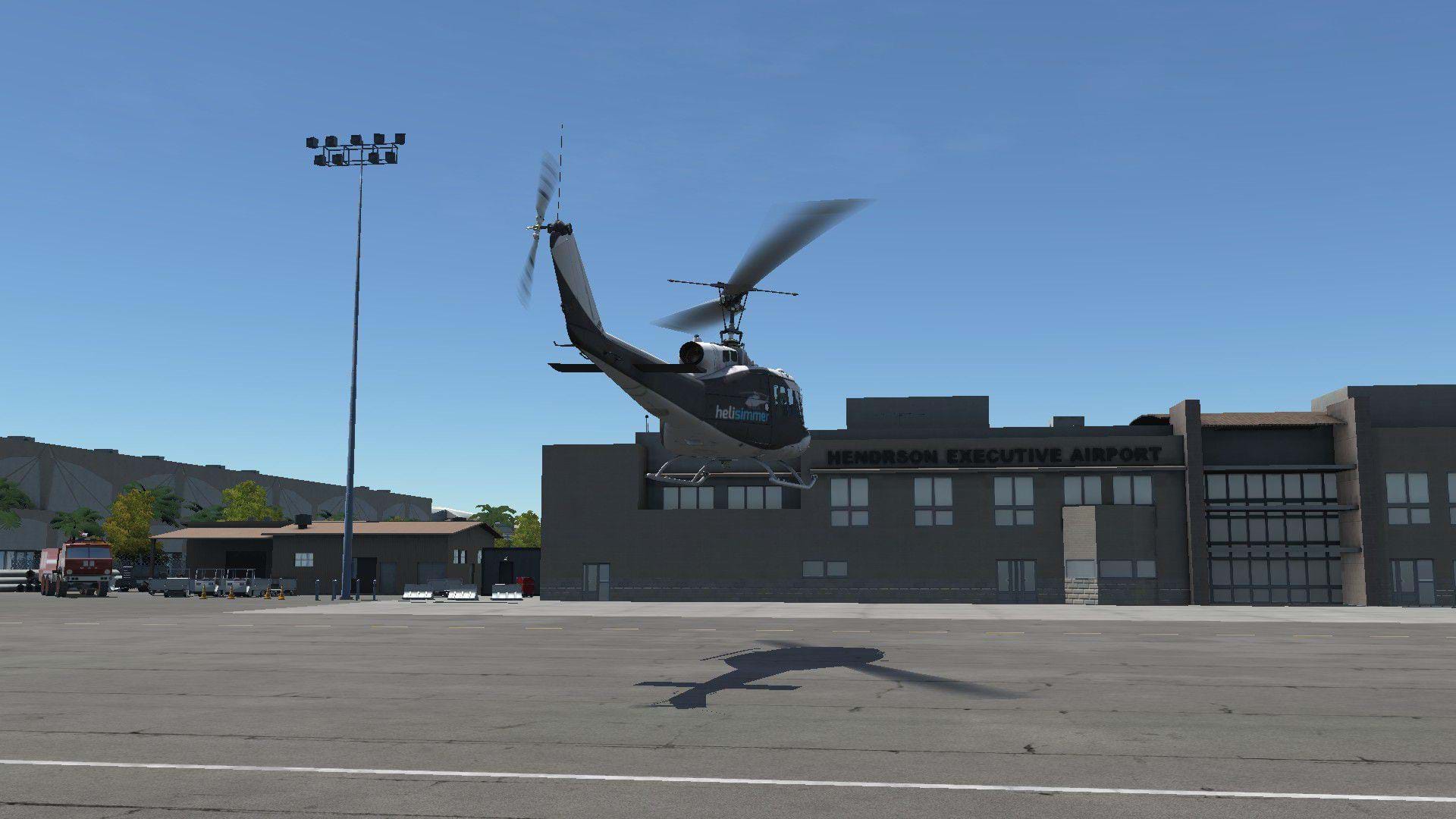 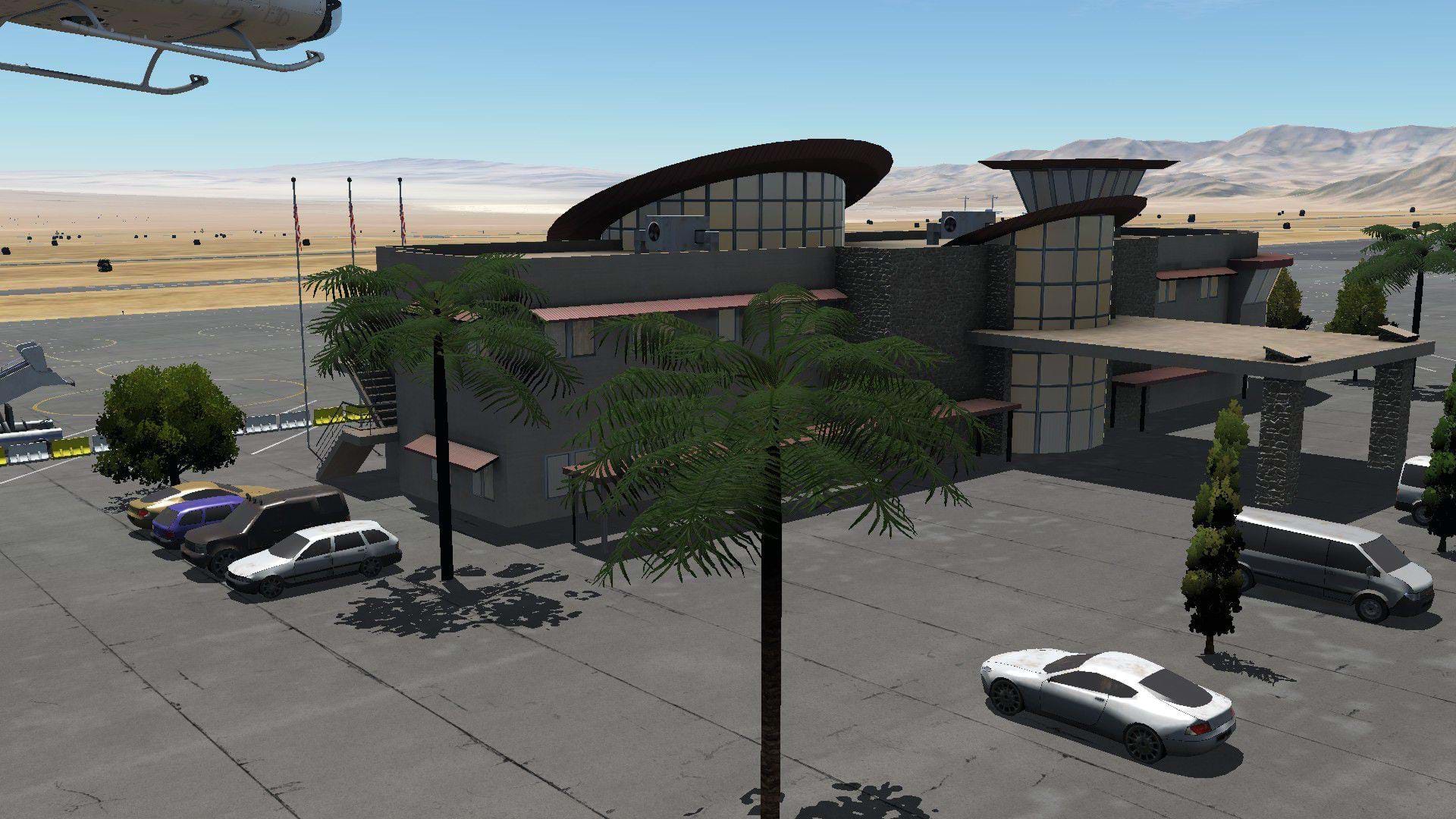 Almost all of the airports have a good amount of extra objects displayed around the airport grounds. Items such as parked cars, boxes, crates, and various other things that one would expect to find at a general aviation airport. This may seem like clutter, but in my opinion, they are essential details that help bring the scenery to life, and keep it from looking sterile or stale. 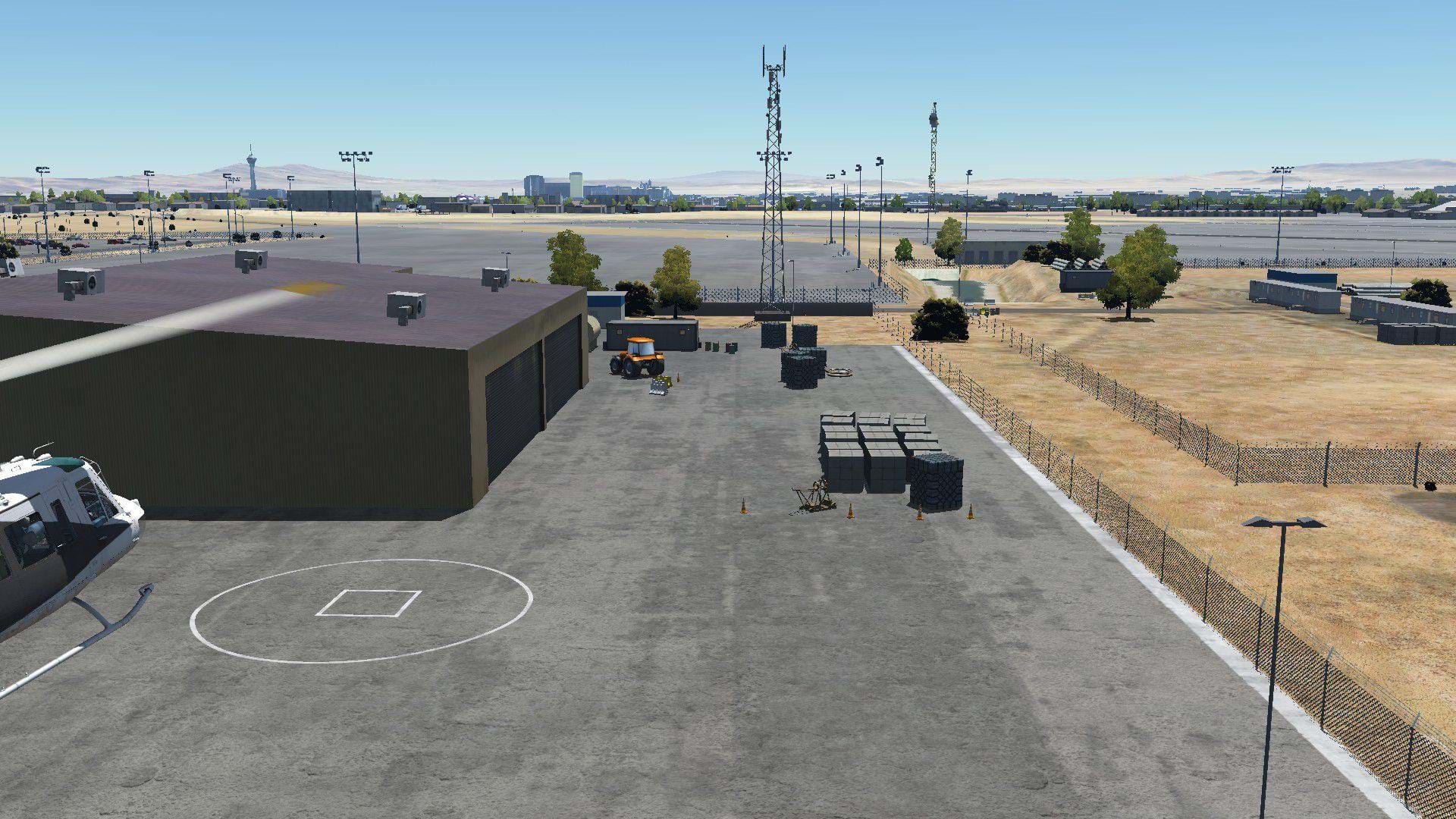 As good as the clutter may be there is one thing that is missing from all of these new airports that keeps them from being much better: there aren’t any other aircraft at the field.

Unlike the depiction of McCarrn International, There are no static aircraft parked anywhere on the airfield. Not a Cessna, Piper or Beachcraft in sight. While there are plenty of buildings, the lack of other aircraft makes these airfields seem abandoned. But, remember, this is still an Alpha, so there’s still room for Eagle Dynamics to add these details later.

The only airport I would call inaccurate would be Mina (3Q0). From the screenshot above you can see that there isn’t much to Mina airport, just a runway. It is only inaccurate because it is depicted as a paved runway. In real life the surface is dirt. This really isn’t that big of a deal because the runway appears to be too short for use by any of the DCS fixed wing aircraft, and I can’t imagine any Helicopter simmer is bored enough to want to fly all the way out there just to see a runway that they don’t need to use. In real life, Mina is mostly used by the Ultralight crowd.

If I had one complaint about the buildings at all of the airports, it would be that in some cases where there are long rows of hangars in real life, Eagle dynamics placed work shop or warehouse type buildings instead. This has taxiways leading to areas on the airport where there are warehouses instead of airplane hangars which don’t make a whole lot of sense. These really look out of place in an otherwise very nice airport depiction. 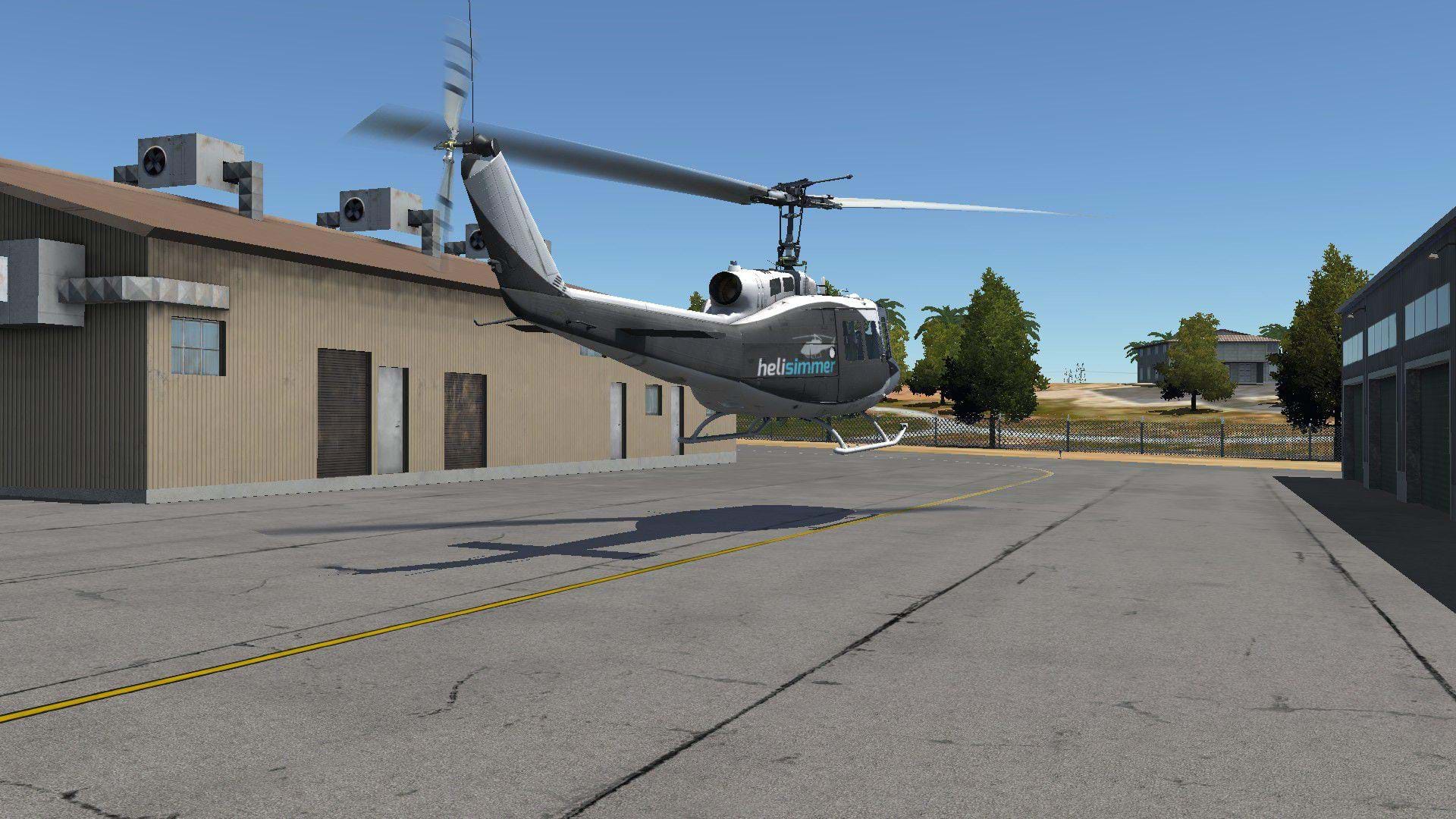 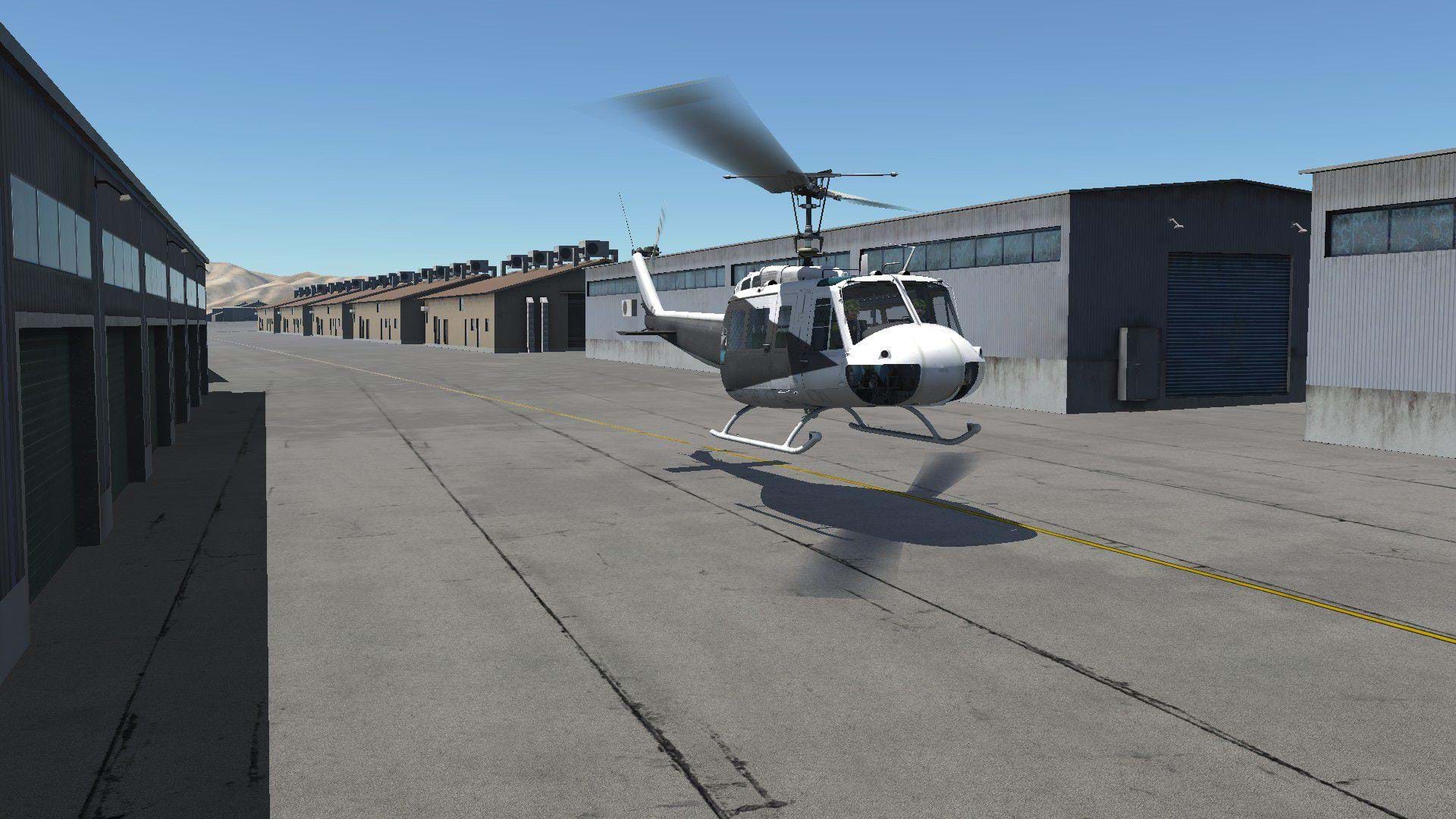 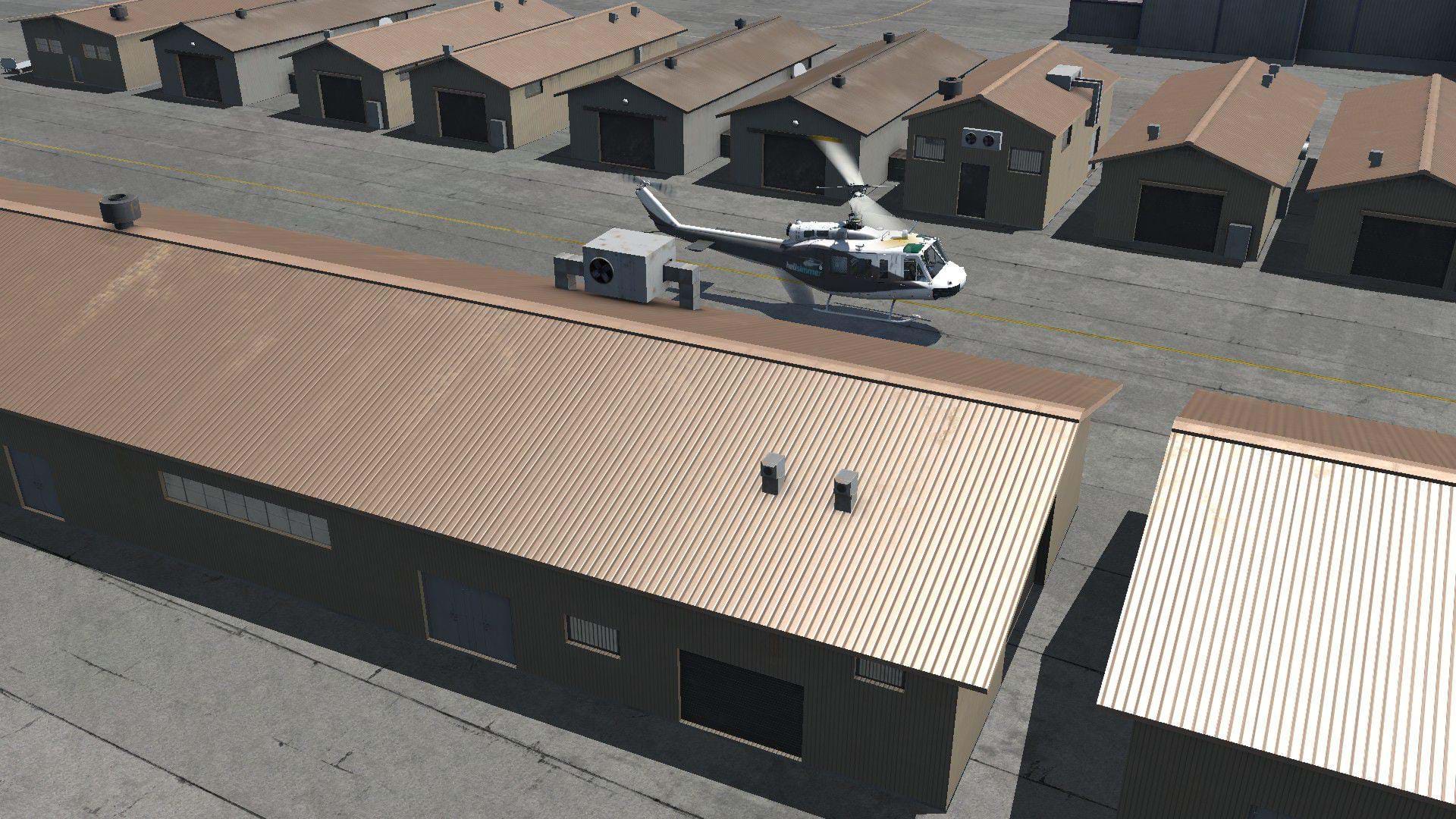 I didn’t notice this in the first review of the Nevada NTTR, but there are a few depictions of real life businesses in the auto gen scenery. This helps bring some extra realism to the scenery by showing some brands that may be recognizable. However, in the case of this screen shot, this regional fried chicken chain doesn’t have any actual locations in Nevada. Being from outside of the United States, there’s little chance the Eagle dynamics team could have possibly known this. Even so, it’s fun to see real life businesses in the scenery. 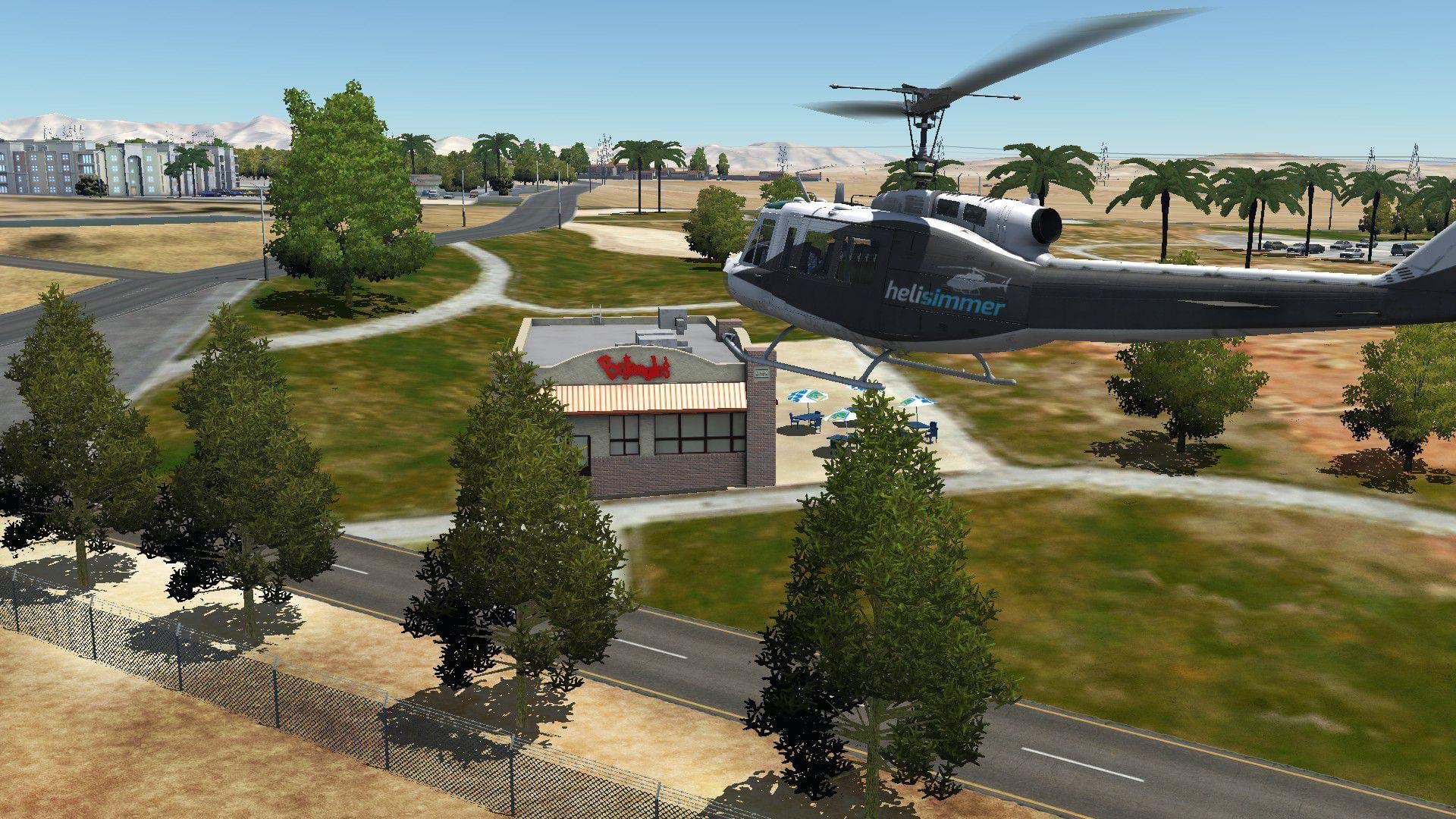 I haven’t noticed any detectable frame rate impact when operating in any of these new airports.

This update to the Nevada NTTR terrain for DCS 2.0 starts to narrow the gap between Digital Combat Simulator and the General Aviation oriented Flight simulators like X-plane and FSX/P3D. It doesn’t narrow it by much, but it does give you more non-military related activities to do in this scenery. This is now essentially a scenery pack that covers the majority of southern Nevada, parts of south eastern California and the south-western tip of Arizona. Ever since these airfields were added, I’ve found myself spending a lot more time in DCS than I used to. Back in May of 2016, I expected the Nevada NTTR terrain to mature into a highly desirable product. Well, with this airfield expansion, Eagle Dynamics is making a very large leap in that direction. So much of a step that I spend over 80 percent of my DCS time in the Nevada NTTR map now, where a few months ago, it was an even split with 1.5.

The NTTR Terrain map for DCS 2.0 is still expensive, but now you get more for your investment. It’s also still an open Alpha, so you can expect more updates and refinements in the future. If you’re a DCS guy, and haven’t yet purchased the Nevada NTTR terrain, I highly recommend it.

Installation 10
Mesh 10
Textures 10
Buildings 9
Visual impact and quality 10
Frame rate impact 8
Total score
9.4
* The above final rating is calculated from a weighted average and not the direct arithmetic average. This means that some elements of the review will have a higher influence in the final score than others.
Click here to purchase/download or more information