If you've been reading our previous FSW articles, you probably found out already about what's up with helicopters and this sim. Dovetail games is VERY much aware of the helicopter community and they know FSX was flawed when it comes to these complex machines. Helicopters will come but not right now. Or in a near future. And you know what? I am OK with that. Do your stuff, DTG.

So, update 8 is out and you probably already heard about it. It's (mostly) about trueSky which is a 3rd party weather/visuals engine. Weather is, of course, a big deal in flight simulators and DTG decided to address it right now. As Stephen Hood put it, they released early and fast so that they can get feedback from the community. That's what early access is all about, folks.

What about trueSky and why have I decided to address this update when I didn't do it for the 7 previous ones? Well, I did that because trueSky is a game changer. It's something that changes and improves the sim in such a way that I thought the heli sim community should check it out as well. 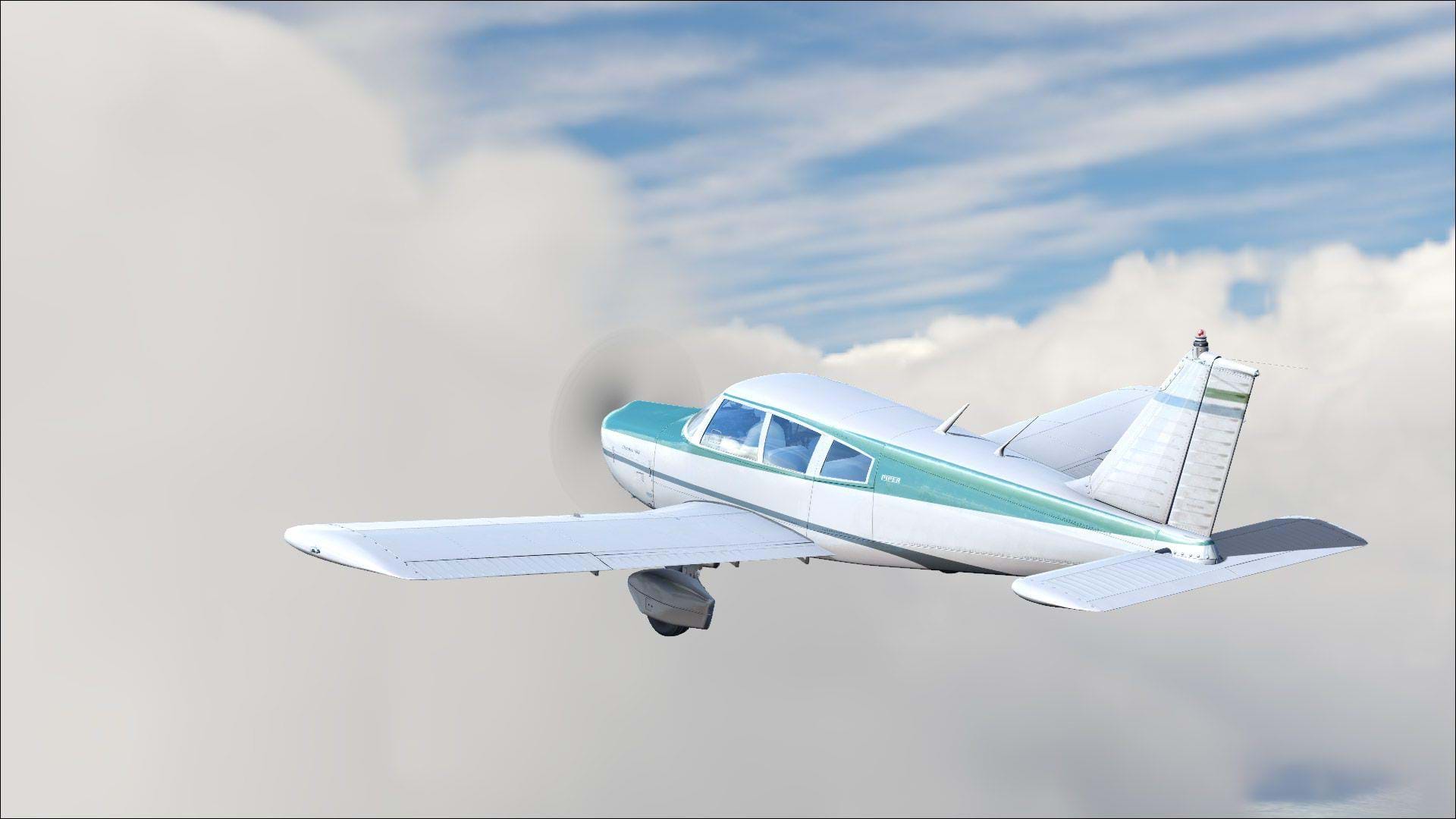 The results with trueSky are absolutely amazing. Clouds are volumetric and dynamic and you really get inside them. There's a glitch in which the world around you seems like an inverted photo when you look outside from the clouds but, other than that, you get inside them -- and get lost. For real. Not kidding, folks. You can easily get lost now if you don't plan ahead and you don't go IFR. If you are flying a VFR aircraft and you get inside clouds, you're screwed. Go back or go low if you can because things will get ugly.

It's THAT good. The folks behind trueSky did a remarkable job and Dovetail Games adding it to the sim was a brilliant move as they save time (and money) and can focus on other elements of the sim.

Hopefully, they might do the same with helicopters and implement HTR into the sim in the future. This would save them time and allow them to use an amazing library that already makes wonders in a sim where helicopters are pretty much stale. 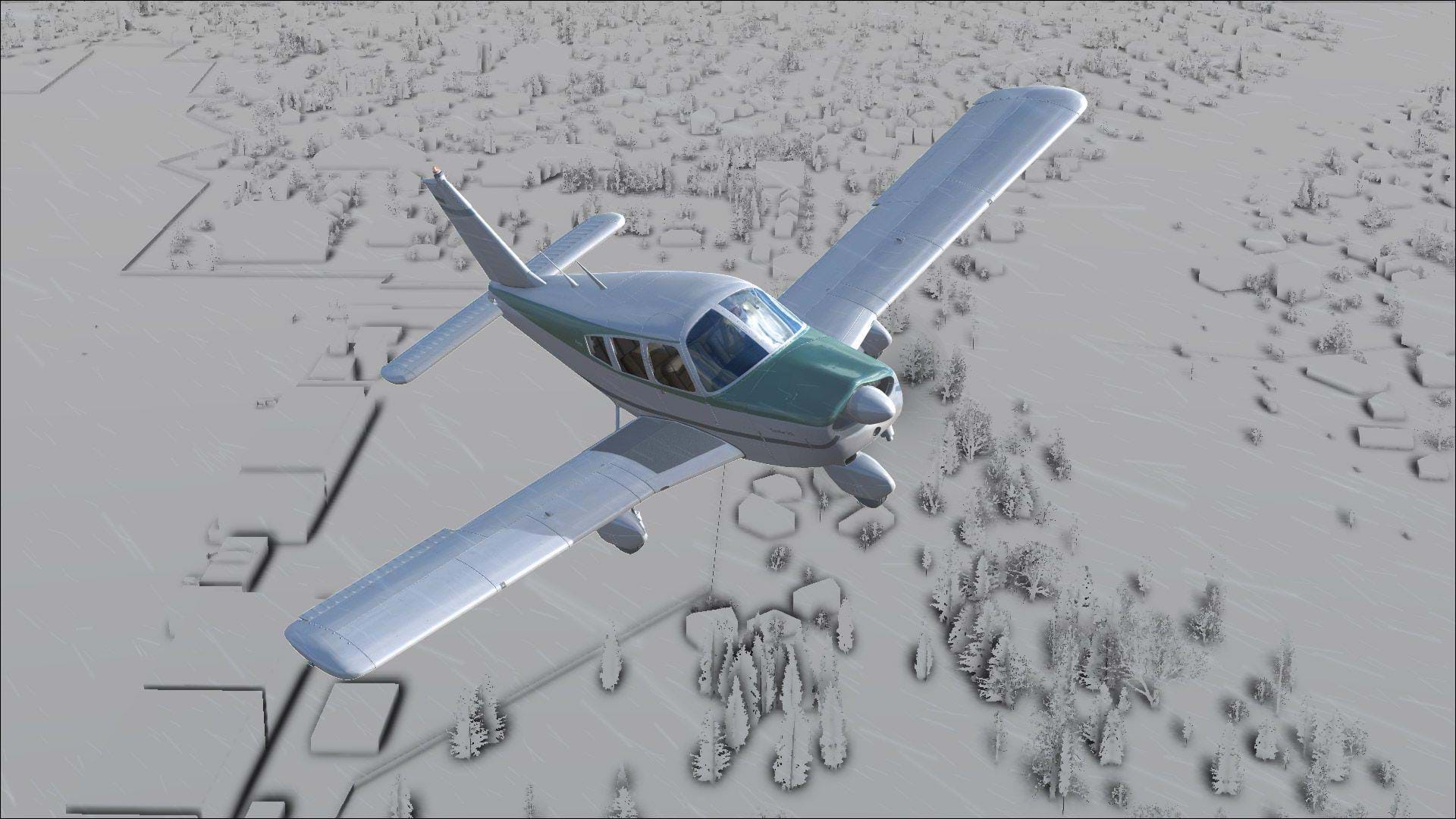 The rain! The rain!

Rain no longer falls from the "infinite sky" and, instead, falls from the clouds. If it's raining and you fly into a place where there are no clouds (or perhaps a hole in the cloud formation) the rail will stop. Head out to the clouds and it starts raining again. Rise above the clouds and the rain will, once again, stop. Rain now comes from the right places and you can run away from it -- provided you have a place to run (or fly) to.

Holes in the clouds are also very nice to watch as they tend to form areas of lighter clouds which you can recognize at a distance, which makes for a great visual clue if you are thinking about running from all the rain and want to see the sun well above the clouds.

You have probably already seen how rain drops now appear and slide on your windshield (if you haven't, check out the screenshot below but you should really check it in the sim). 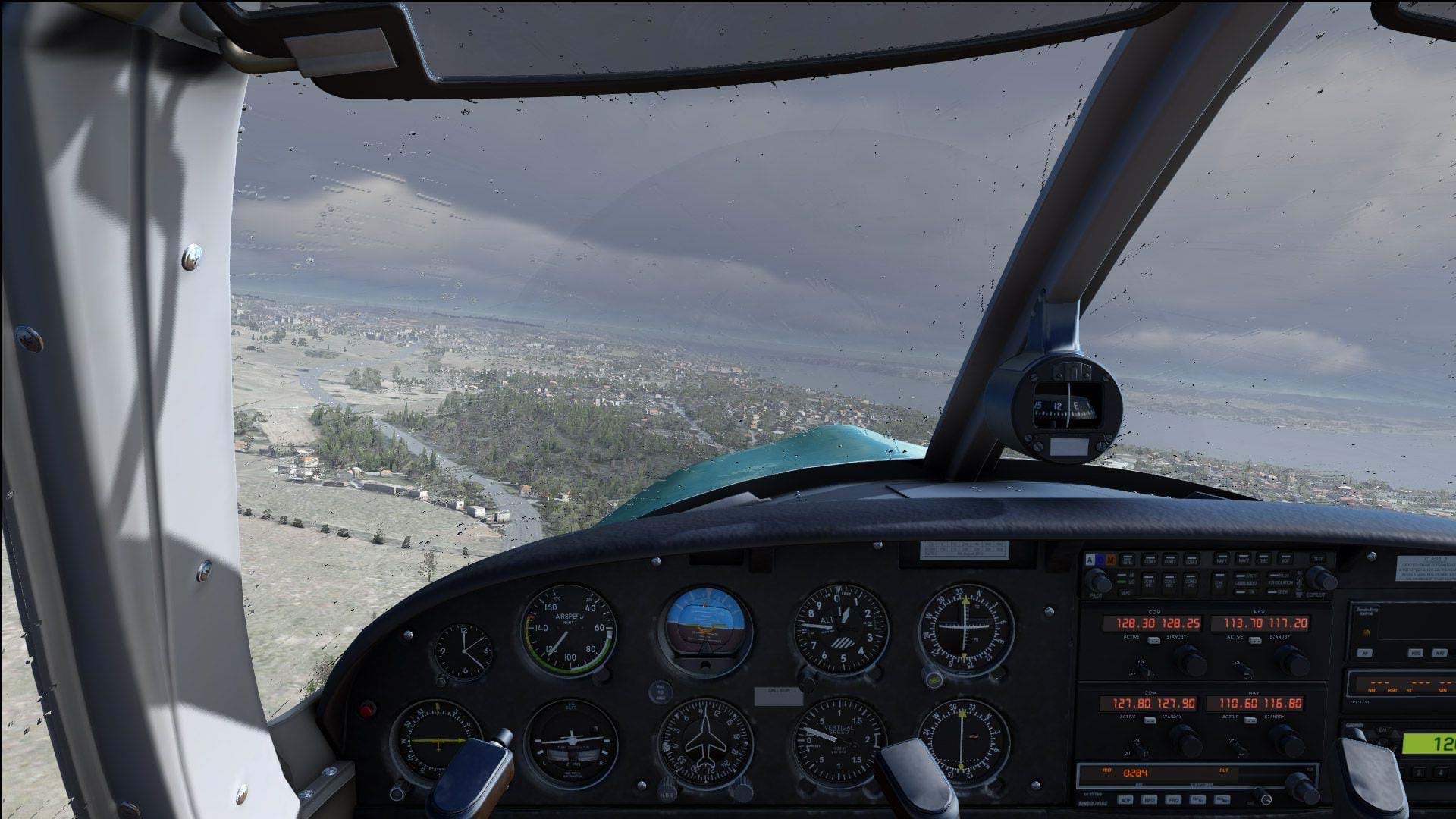 trueSky now brings us snow and what a sight it is! Screenshots just don't make it justice. You need to see it in the sim. In one of the screenshots below you can see how the snow is lifted up by the landing gear and carried away by the wind. The snow flakes randomly fall just like you see in real life.

The effect is tremendous and you feel like the snow might actually be real! Again, you have to see it for yourself. Not even the videos I found could make it any justice. Sometimes you really need to see the sim rendering stuff in front of you. 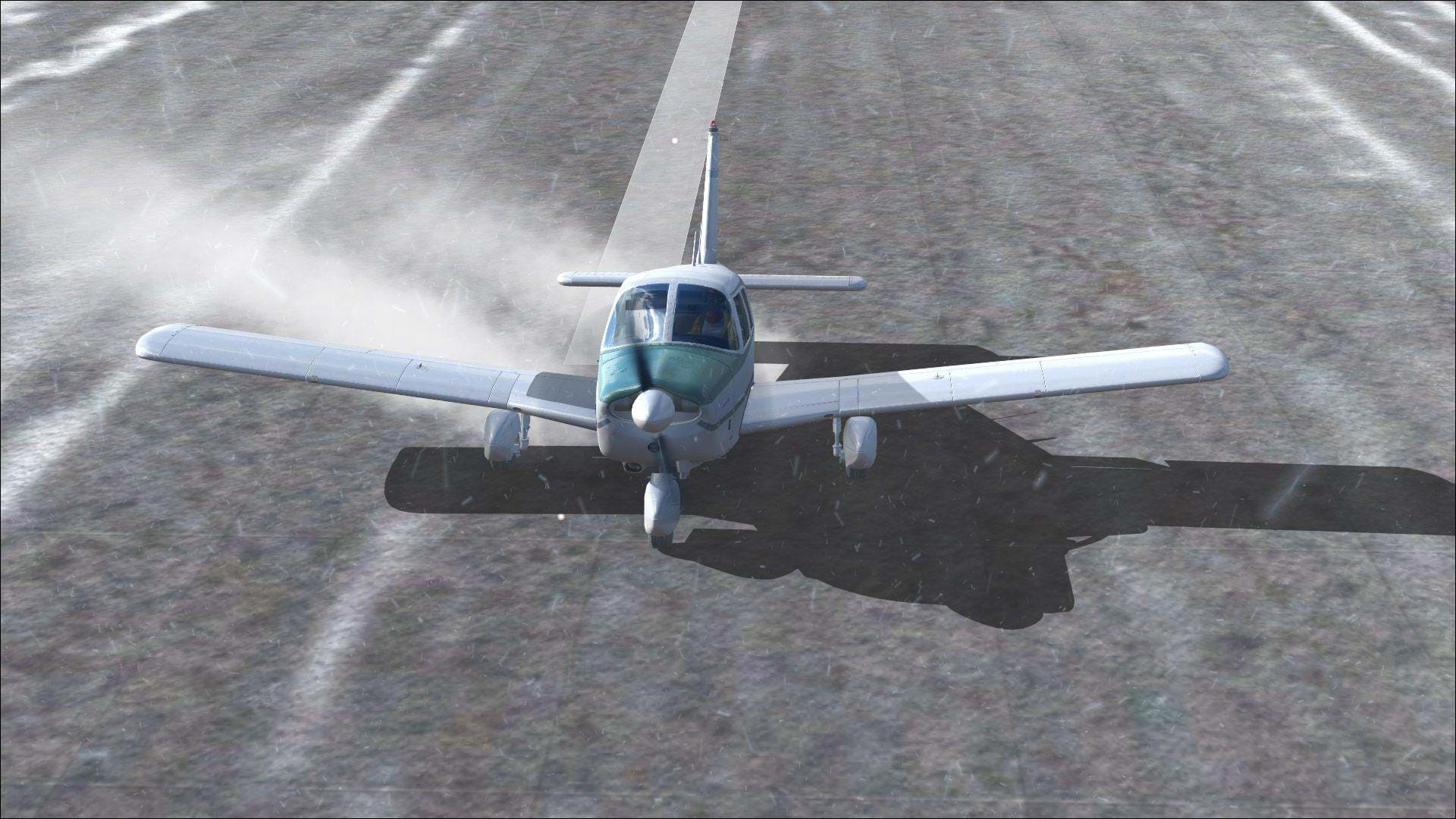 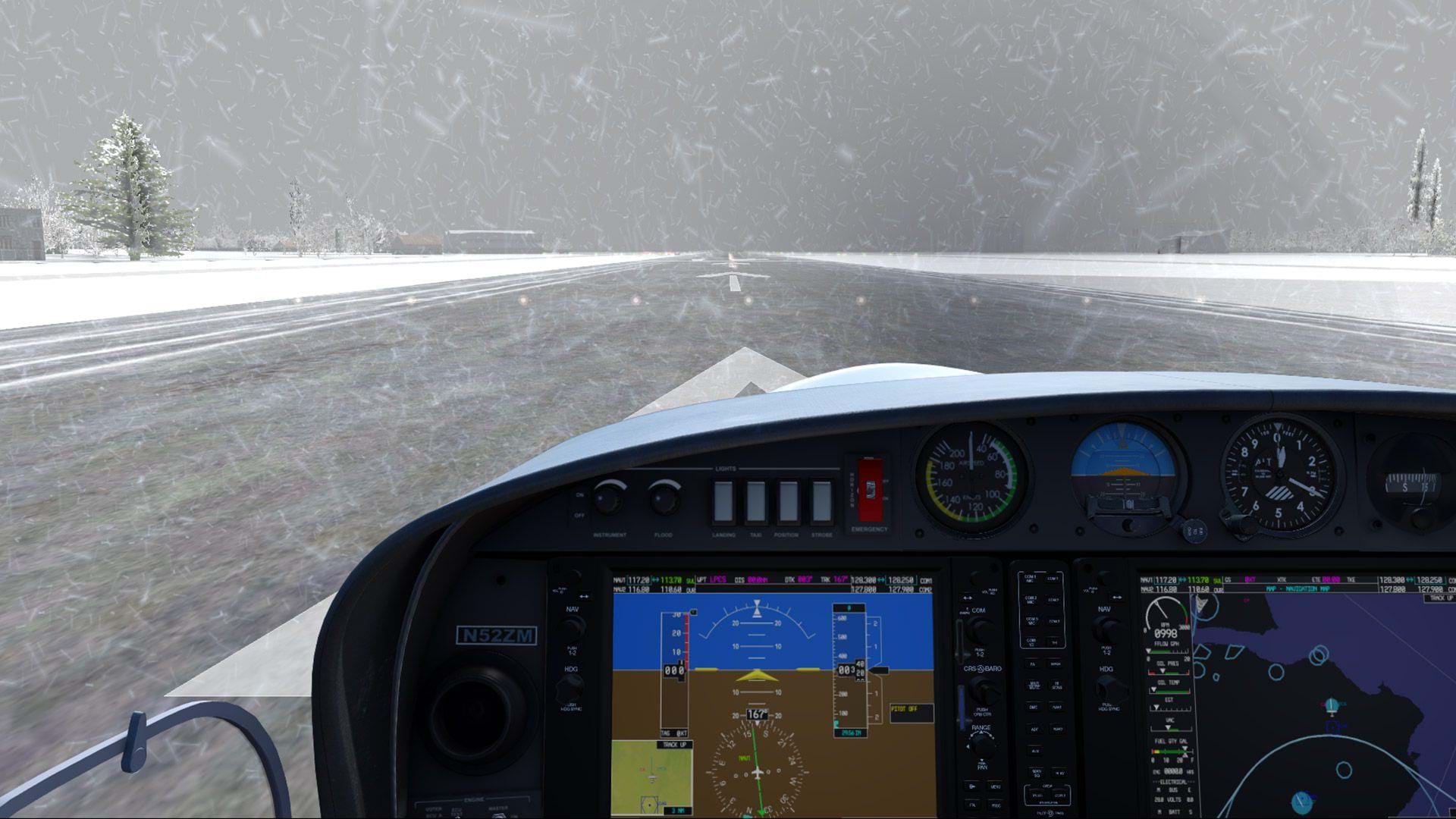 A place of freedom and discomfort

Flying has always been hand-in-hand with freedom. So far, most sims give you a false sense of actually being airborne -- especially when you started looking into clouds and rain, for example. FSW broke that barrier with the release of trueSky and I can honestly say that the amount of immersion the sim offers me now is something I was not expecting to see so early down the development map.

This works both for good and for bad. The skies can now be a place of discomfort. Turbulence is much more present. Lack of visibility is a menace and I suddenly actually look ahead and try to find the best path as to avoid the nasty clouds that can turn my day into a very bad one.

Dovetail Games will keep on building FSW and listening to us, the community. They are counting on us to help them shape the sim and make it work for us. Head out to the DTG forums and report any bugs or problems you may find or maybe even add a few suggestions.

If DTG is not aware of what we want, they won't get it in the sim.

I can't wait what the next big advancements will be. I am hoping they keep on updating the weather engine and start working on the physics engine so that new aircraft may arrive soon.