If you have been paying attention to the market (and you probably have), you may have noticed the arrival of a sim that has been turning heads. Aerofly FS2 looks absolutely amazing and the community is getting excited over it. We (virtually) sat down with Aerofly FS2 developer Torsten Hans.

Hello Torsten, thank you for taking your time to answer to our questions.

Hello Sergio, you are more than welcome to ask me some questions.

First of all I think it would be nice for our readers to get to know a bit more of your company and yourself.

Marc and I are in the flight simulator business now for over 18 years. We always liked programming and we were interested in physics, which is a good combination for developing flight simulators. I myself started programming at the age of 9 with the legendary TRS-80. We founded our company IPACS back in 1998 while studying physics at the university of Tübingen. We then decided to turn our hobby, flying radio controlled airplanes, helicopters and computer programming, into a living. Our physics background and the following doctoral degree in physics really helped us to create our first R/C flight simulator. Roughly 6 years ago we came out with our first first full scale flight simulator Aerofly FS 1 for PC, Mac, iOS and Android.

Now that we know a bit more about you, let's talk a bit about Aerofly FS2. Is this second version of your simulator something that you want to put on the market up to pair with other sims such as FSX, Prepar3D and X-Plane? I mean, the first installment of your simulator was pretty much limited regarding the scenery and aircraft. You could only fly in Switzerland and with a certain amount of aircraft that only you released. How is FS2 going to be?

Well, Aerofly FS 2 is our first step into a global flight simulator and we will be open to third party developers. So we have actually created a building block for the community. Currently Aerofly FS 2 features around 200 airports in Southwestern USA, but we intend to add more airports either ourself or through 3rd party developers in the coming months. As you may have noticed, we are taking a slightly different approach with Aerofly compared to FSX and X-Plane. Offering a good and realistic flight simulator, yet offer a smooth simulation and an easy to use interface for novice users. Its not an easy task, but for a flight simulator to be successful we have to appeal to beginners and experts alike.

So we can expect thousands of airports and navaids just like in those sims? And the ability to expand it ourselves?

Attracting 3rd party developers is own main task in the immediate future. We try to offer a SDK that allows people to easily add content to Aerofly FS 2 in the form of new airports, airplanes and even functionality. Actually at the time of this interview we have finished our first version of the SDK and have sent it to some developers for evaluation.

What about ATC? Will it be added to the sim?

ATC is definitely planned. We haven't decided yet, on how we are going to implement it, but it will eventually come.

People ask this a lot. Doing real weather is a challenging task. We have this planned as well, but we would like to focus on ATC, VR, more system depth first, before improving our weather system. 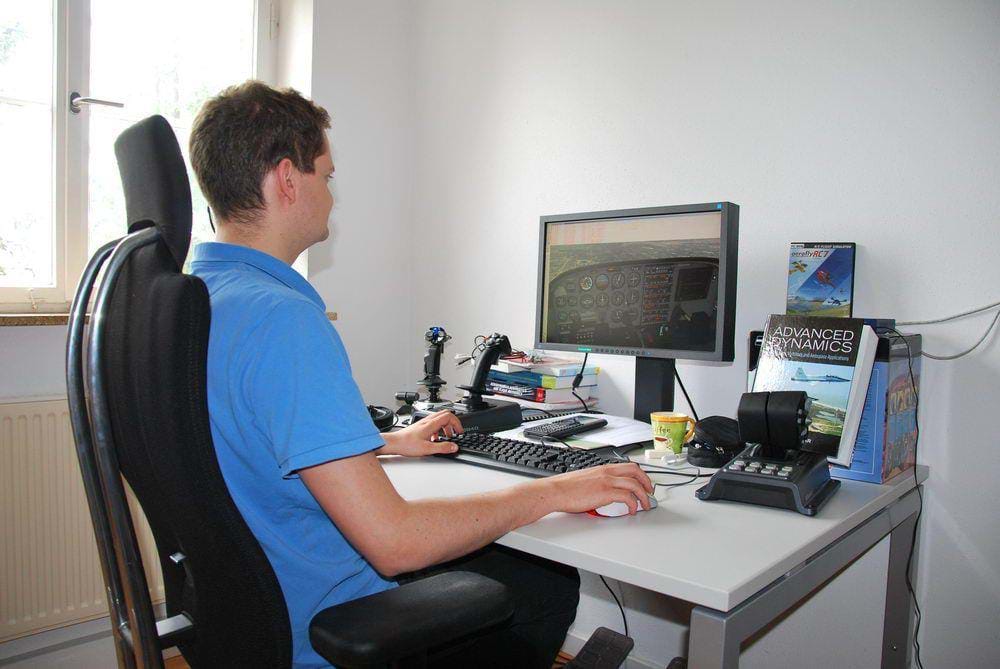 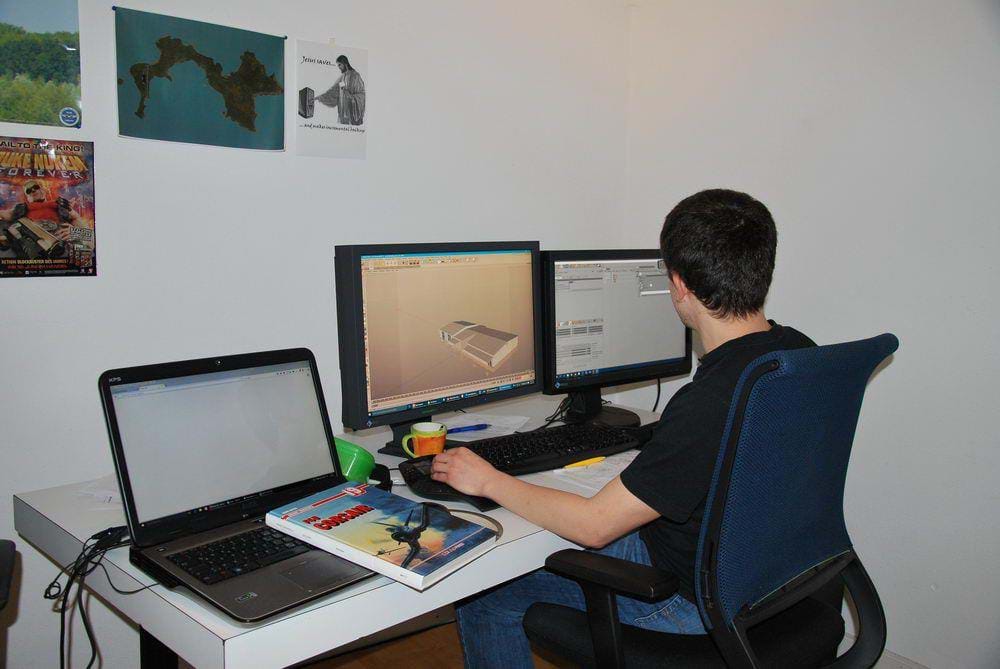 When do you think the final version will be released? Are you going to do other releases until then? And are you going to keep on developing the sim after the release or are you guys already considering a third version in the future?

Aerofly FS 2 is currently in Early Access on Steam and will stay there for at least quite a few more months. We have plans to publish new updates on an irregular basis, e.g. whenever we have new features or new content that justifies a new update. We found that the community really needs some more features, before we can leave Early Access. Once those features are included, we will eventually publish Aerofly.

What about the aircraft systems? Will it be possible to model the different systems and do a complete realistic startup or shutdown in any aircraft?

So far we offer basic cockpit interaction for adjusting the auto pilot and for setting the navigational instruments. The first updates we have planned will improve on this, so that you can actually use LNAV and VNAV in all of our airliners. Realistic startup and shutdown is challenging, not from the physics side, but we have a hard time finding good sound sequences for startup and shutdown. So we might offer this feature on selected airplanes in the future.

I see. And what about the flight models? Can we expect realistic aircraft behavior?

We can proudly say that our flight model, by this we mean the physical simulation of the flight dynamics, is considered one of the best on the market. We have many real world pilots that confirm this. Aerofly is even used by professional aerobatic pilots to prepare for tournaments.

The simulator looks very good. The scenery is of very high quality and the aircraft are stunning. The reflections and shadows really blew me away. What engine are you using? Is it your own? For how long have you guys been working on it?

Yes, we have written the engine ourself. Its the result of many years of work. The main advantage is, that it is much easier to improve an engine that you have programmed yourself, compared to a 3rd party licensed engine. That doesn’t mean we will never incorporate any 3rd party stuff, but the overall performance of Aerofly will be better if we stick to our own. 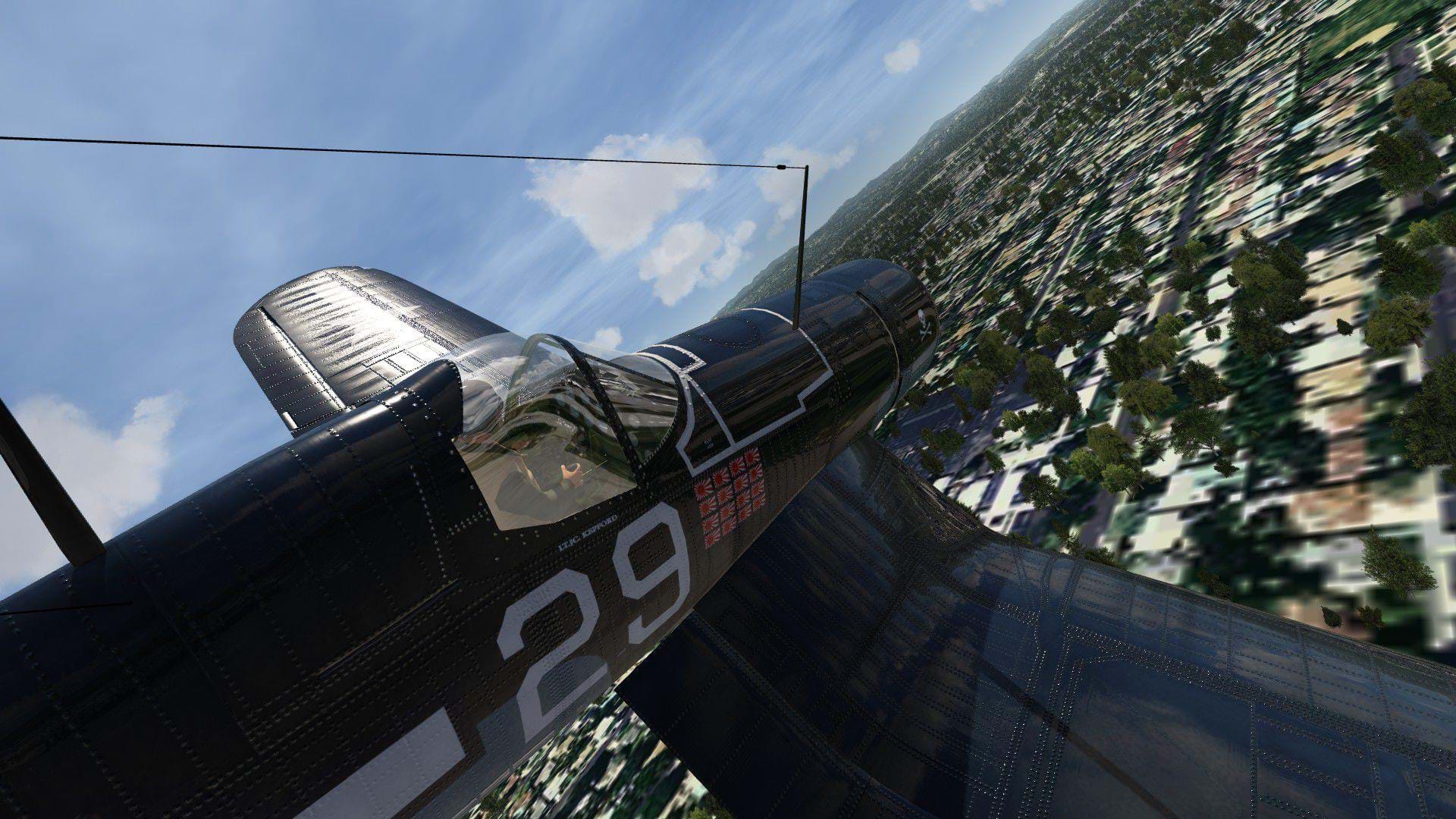 By what you said regarding the ability to develop add-ons for the sim, I think you understand how important that is for the longevity of a simulator. And people will only develop if they have the right tools and it's easy for them to do it. What tools can the developers expect to have at their disposal to make their own add-ons for the simulator? Are you just releasing some low-level tools or are you including some programs that will allow developers to actually see what they're doing?

We will offer low level tools for creating new airports, scenery objects and of course airplanes. The modelling of those objects requires that the developer has access to a modelling software like 3D Studio Max or Cinema 4D. We can add support for other 3D modelling tools, but it is not planned yet. We then offer converter tools, that convert from those programs into our generic format. Adding new airports and scenery objects will be fairly east to do, as it basically only requires 3D modelling skills. However, adding a new airplane is a lot more challenging. Besides the 3D modelling part, the developer also needs to set up the flight dynamics definition file which requires a lot of work depending on the comlexity one wants to achieve.

Let's talk about something that is really the reason why any flight simulator should exist: helicopter (laughs). Yeah I think pretty much every simulation software out there was built with the sole purpose of people flying helicopters! Seriously, now. I have seen on your forums that helicopters are something that are planned but not at this stage. When can we expect to see them?

As you might have guessed, we already have the physics engine for helicopters for our R/C model simulator, so in theory we can upgrade this engine a little, which would allow us to simulate large helicopters. If the physics in the small scale are 'right', its not that much work to get it right for bigger helicopters. Its just that demand for helicopters is a lot lower compared to the other features that have been requested, so we are putting a lower priority on helicopters for now. But helicopters are planned, I can assure you. Just don't ask me yet, when you will see them. Just to give you some perspective, we already have a finished model of a R22. If we do have some spare time, I wish we would have this (laughs), we might even put the R22 into the simulator as a 'preliminary' version. 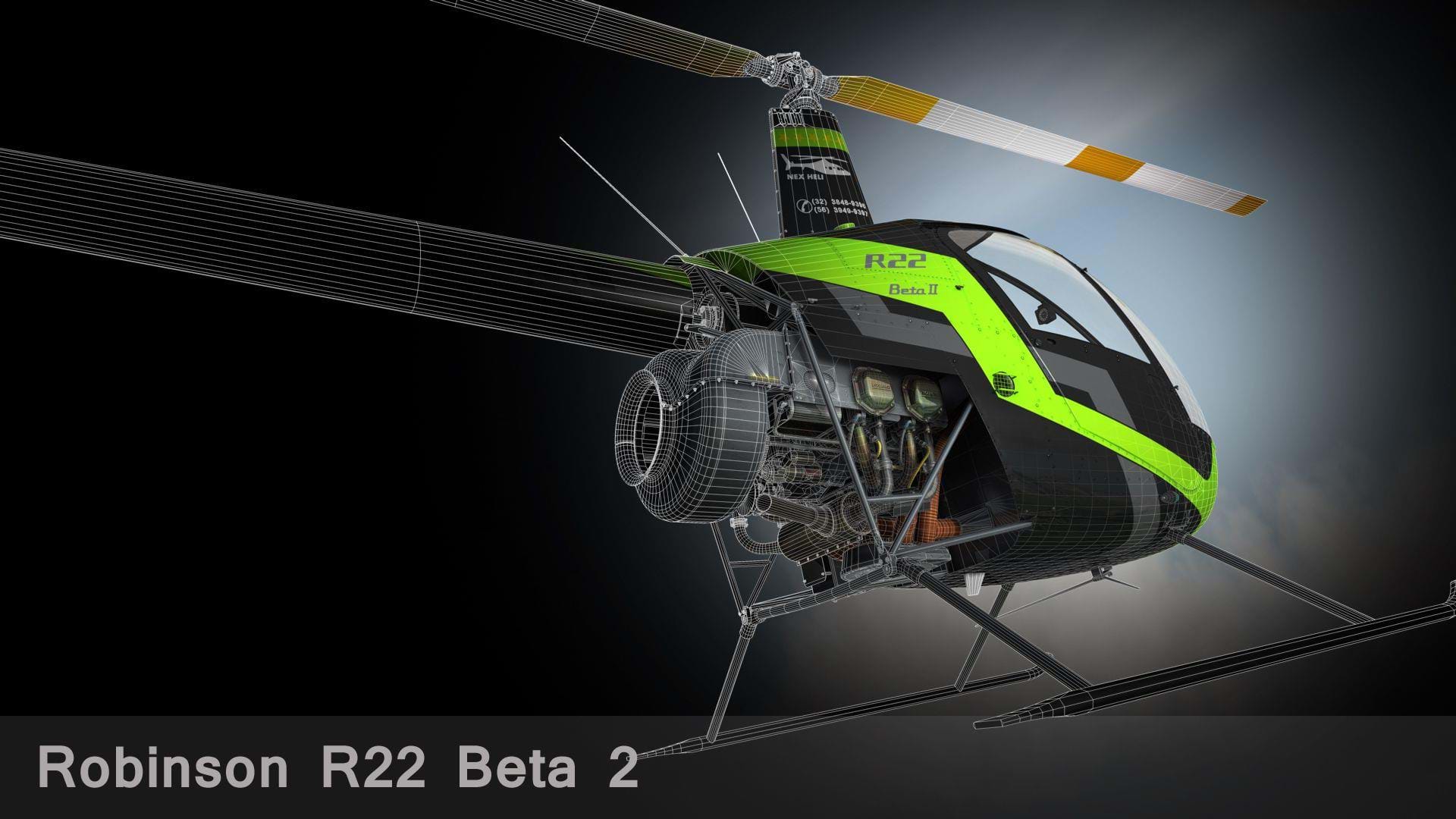 One of the main concerns of helicopter simulation fans is, of course, the flight dynamics. Apart from everything you mentioned already, there are some worries that helicopter fans have. Namely: autorotations, VRS and multi-engine models are often the top concerns of those that love these aircraft. What can we, helicopter fans, expect from Aerofly FS2? Are you guys planning on going the extra-extra-mile for helicopter pilots?

Our R/C flight simulator already simulates autorations, multi-engine models and so on. And like I said, if the physics in the small scale are correct, its actually just a matter of adjusting the flight parameters for larger models. So if we come out with a helicopter for Aerofly, expect to see realistic flight dynamics, like autorotations and so on.

Well, we do fly R/C helicopters and we do have some people in our team that are really into helicopters.

OK I need to ask you this or our readers out there will kill me. Is. It... 64 bits? (laughs) I ask this because everyone out there is asking about it. Whenever someone sees something about a new sim, their concern is not if systems are modeled, if the flight model is correct, if we can simulate procedures, or anything related to the actual simulation but rather if it's 64 bits. So, OK, I'll ask! Is it 64 bits?

[Laughs] Yes, Aerofly is 64 bit, but we could also build a 32 bit version and you wouldn’t really notice a difference. It really isn't that important. Its one of those common beliefs 64 bit results in a better and faster program. If your engine is optimized well, one can still write good 32 bit programs. Anyway we still think 64 bit is the way to go as it gives us room for more stuff to add to our simulator. Its just said it take so long for the Windows platform to adapt to 64 bit, even Apple was much quicker with their mobile devices. 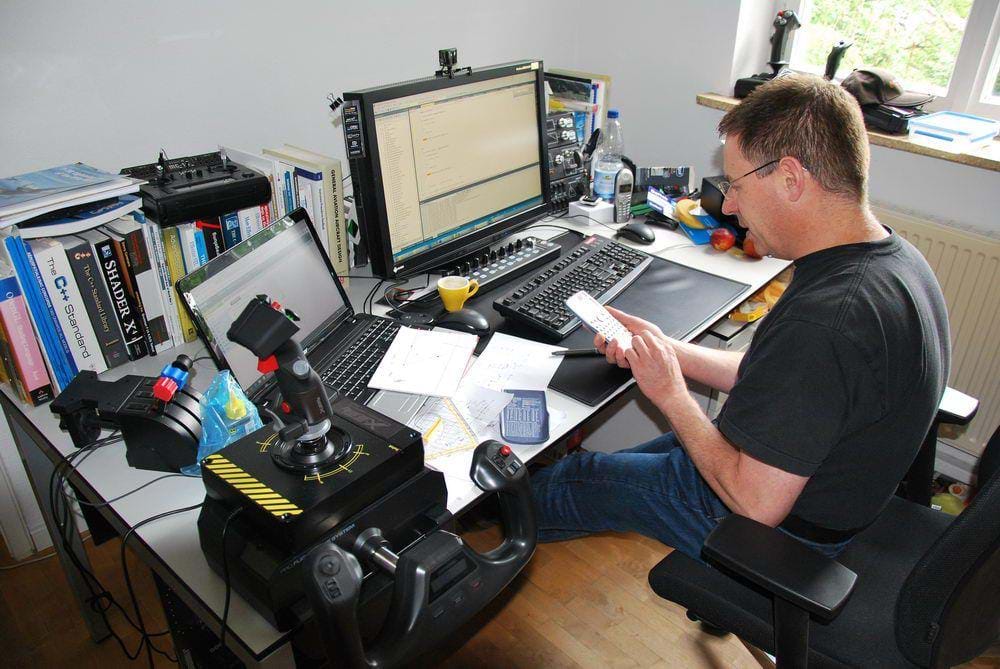 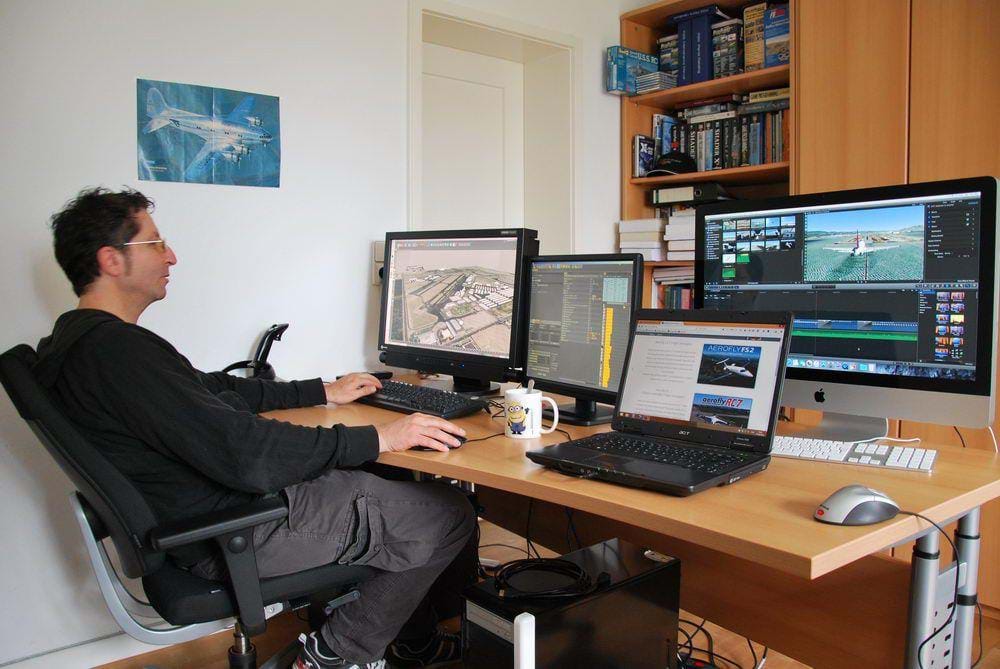 Torsten, thank you very much for your time and for answering our questions. I would like to finish with a challenge for you: tell our readers why Aerofly FS2 is something they should pay attention to in the following months.

Well, we really want to create an easy to use, yet very realistic flight simulator. I personally think this can be done even though flying itself is a complex process. If you give us time or if you even support us, while we are still in Early Access, you will hopefully see a new fresh new flight simulator in the near future. It might not be a full FSX or X-Plane replacement, but I am sure it will appeal quite a few users.

Sergio, thank you very much for this interview.

Where to get Aerofly FS2

PLEASE NOTE: as of today, Aerofly FS2 is still in early access so don't expect it to be a finished product.

If you still want to go ahead, you can get Aerofly FS2 here.