Jan 26, 2017 | by Sérgio Costa
Tutorials, Basics
Tutorial, How to fly helicopters, Hover
The hover is probably the most difficult maneuver to master and one that you will need to in order to be able to perform several operations in an helicopter.
This article was made having recreational flight simulation in mind. Under no circumstances, it should be used for real flying or for real flight training.

After getting to know your helicopter, its controls and how they interact with each other, it’s time to get your feet wet and start working on this important (and hard) maneuver.

Throughout your helicopter “career” you’ll have to transition to and from the hover. You get into a hover after you take your skids (or wheels) off the ground, prior to cruising. You get into a hover while going from cruise to landing. You’ll hover to pick up cargo on sling operations, etc.

Pretty much everything you do in a helicopter forces you to hover so this is something you really need to master and it’s not something easy to do.

Remember all those forces trying to shred your helicopter to pieces? We’ll have to handle them all.

Hovering requires you to use extra power when compared to forward flight, which means there’ll be more torque as well, and off we go. But we’ll get to it. First things first.

Start practicing in a place with plenty of room around you. Clear all the weather and wind. You don’t need the extra burden. At least not in the beginning.

If you do feel that you are having trouble controlling the yaw, add a bit of head wind. Perhaps 5-10kts as to keep the helicopter stable.

As you'll see, this is where all that we've talked about in previous articles will start making sense and why we have gone through it -- even if it seems boring.

Start by slowly increasing the collective. I cannot stress this enough: do it very slowly. Most of the problems I’ve seen with newcomers is exactly the fact that they crank up the collective.

If you do crank the collective up, your RPM will drop rapidly and the torque will increase dramatically. You’ll get yourself in a very nasty position where you’ll lose control of the helicopter very fast. If the loss of RPM won’t make you crash, your “dance” around will. You will eventually hit the ground and smash your helicopter.

Any movements in the controls should be done with care and slowly. Always.

So, again, slowly increase the collective. As you do, you’ll eventually feel the helicopter’s nose move in the direction opposite of the rotor rotation. This is the reaction to the torque and you will need to counter-act it with the anti-torque pedals. 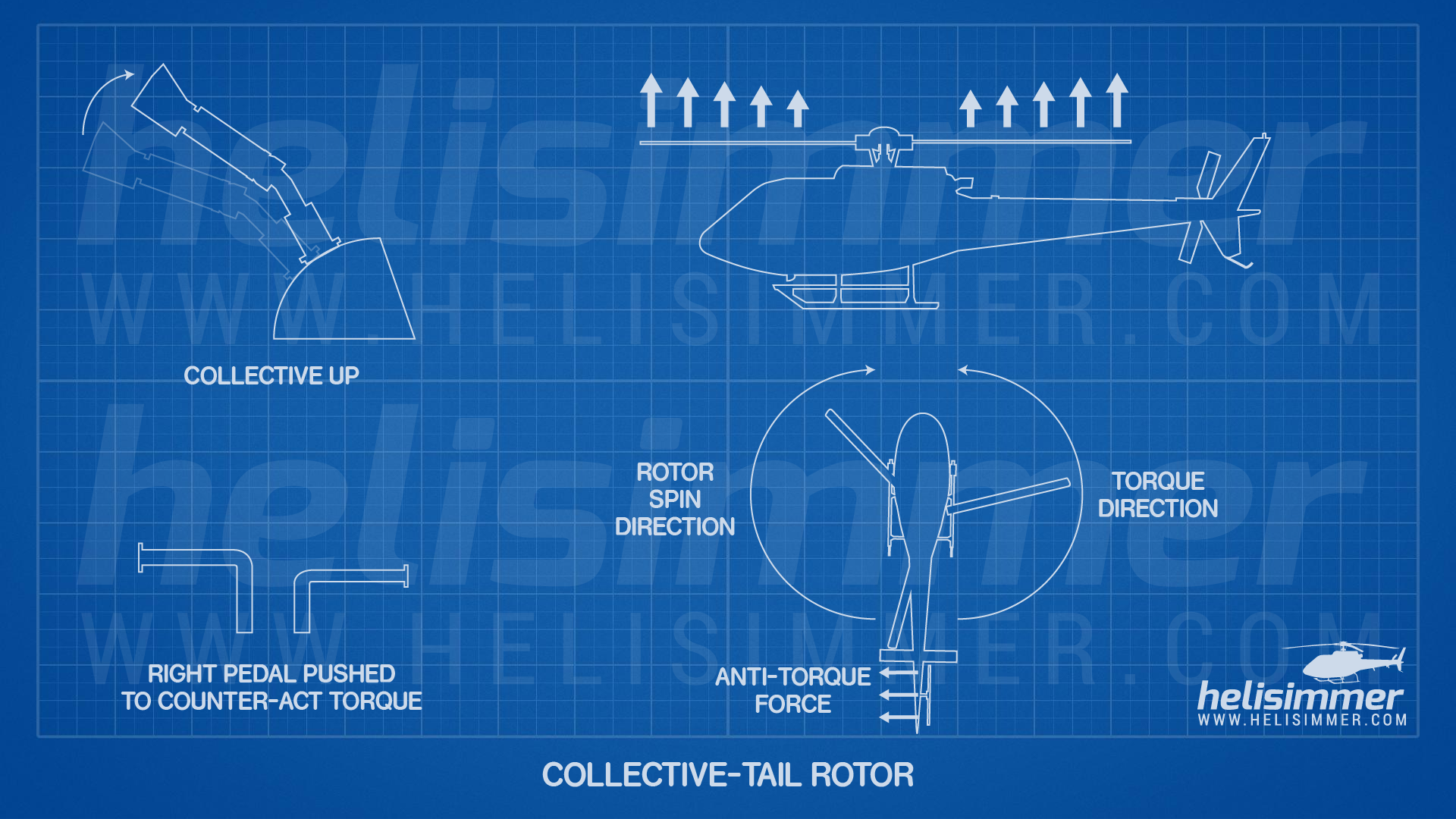 As the collective increases, so will torque, so you’ll need to adjust your pedals accordingly. Lift will also increase and you’ll soon have your skids (or wheels) off the ground.

Once you lift off, your helicopter will try to move around. You’ll need to keep it under control with the cyclic. You should not move the collective unless you are climbing too much or need to do some minor adjustments. If you moved the collective slowly and stopped once you lift off, you should now be a few feet above the ground and vertically stable.

Move your cyclic slowly to counteract the movement of the helicopter. Always wait for the helicopter’s reaction as it may take a second for it to react.

Remember: it won’t be easy. You’ll probably end up upside down or fly against a building. It’s all normal. It takes time for you to get to know the controls and the helicopter and to build up some muscle memory. Muscle memory is very important and it will be a big part of your flying skills.

There will be a time where you’ll be hanging by the rotor, hovering above the ground and keeping your helicopter in the same place.

Remember that you will always need to be on top of the helicopter. You cannot simply put the cyclic in a position and forget about it. Physics will keep throwing stuff at you and you’ll need to be constantly fine-tuning and adjusting your position.

There’s something that you will probably notice: if you stop moving the collective after you start climbing, the helicopter will eventually stop the ascent after a few feet.

That’s because, during those first feet, the helicopter is under the influence of ground effect.

Ground effect is a very complex phenomena that pushes the helicopter upwards when there's a surface underneath it at a certain distance. I won't cover it here as it's really very complex but I wanted to tell you about it because it may get you into trouble and it does influence your flight at low altitude.

This is something you need to have in consideration when taking off from building roofs, oil rigs or pinnacles, for example. 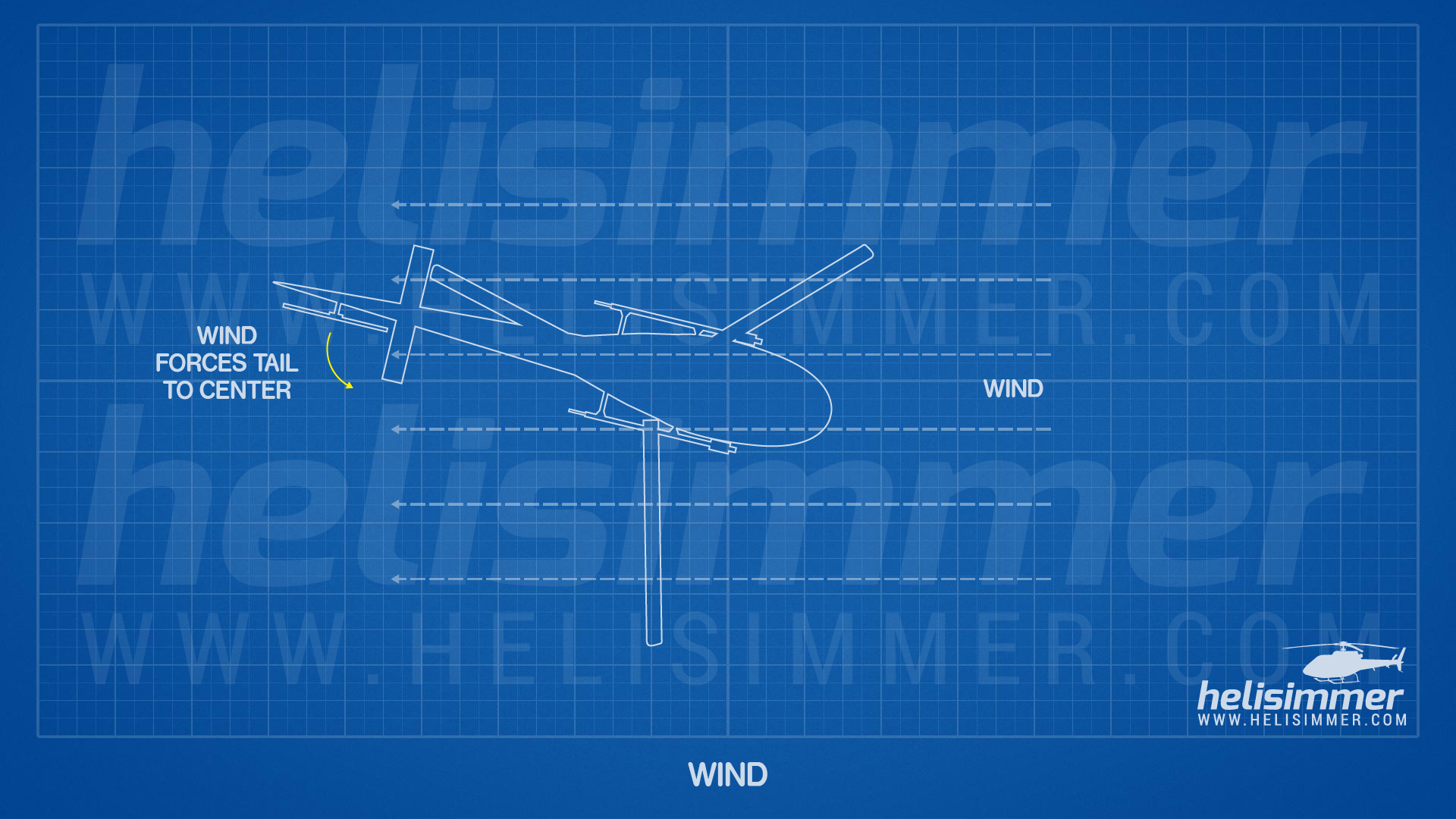 After you start mastering the hover with no wind, add some wind to it. Start by making it so that the wind comes from the front of your helicopter to the back of it. You see, helicopters tend to turn into the wind. By placing the wind into that direction, you’ll not have to fight lateral forces and will not have to correct your yaw axis too much.

In fact, you may actually feel that you need to correct your yaw axis a bit less since the wind will force the tailboom to stay in place.

With head wind, you will have to push the cyclic a bit forward in order to stay in place. That’s normal and expected and you’ll earn how to compensate in time.

Once you are comfortable hovering with head wind, try changing its position.

Don’t try to hold your hover with a lateral or backwards wind, though. Move your helicopter’s nose into the wind as soon as you can as it’s the better, most stable position. That will keep you safe.

If, for some reason, you cannot rotate into the wind, try to get on the move as quickly as possible. You’ll be in a situation which can be very unpleasant, very quickly.

The hover is something that you should put as much practice into it as you can. Don’t push it too hard, though. Pratice in small 5-10 minute sessions and then move on to other, more fun things. You should not get burned out because of it.

I hope I manage to pass you the fundamentals of the hover. This is a very important maneuver that you should master in order for you to be able to get into other ones such as taking off and landing. Especially in very confined areas.

I'd like to thank Joe Hudson for all the help and support while writing this article.