Feb 19, 2017 | by Sérgio Costa
Tutorials, Basics
Tutorial, How to fly helicopters, Take off
While being of the easiest things you perform on a fixed-wing aircraft, taking off with a helicopter is quite a challenge.

Every flight starts with a takeoff (at least it should). It's the start of your journey and, it's pretty much a matter of configuring the aircraft, throttling up and off you go.

Unless you're flying a helicopter.

If you read the previous articles of this section (if you haven't I highly recommend you do), you may have noticed helicopters have a lot of complex physics behind them and something so theoretically easy as bringing your skids off the ground is, in fact, a complex maneuver.

Breaking up the takeoff 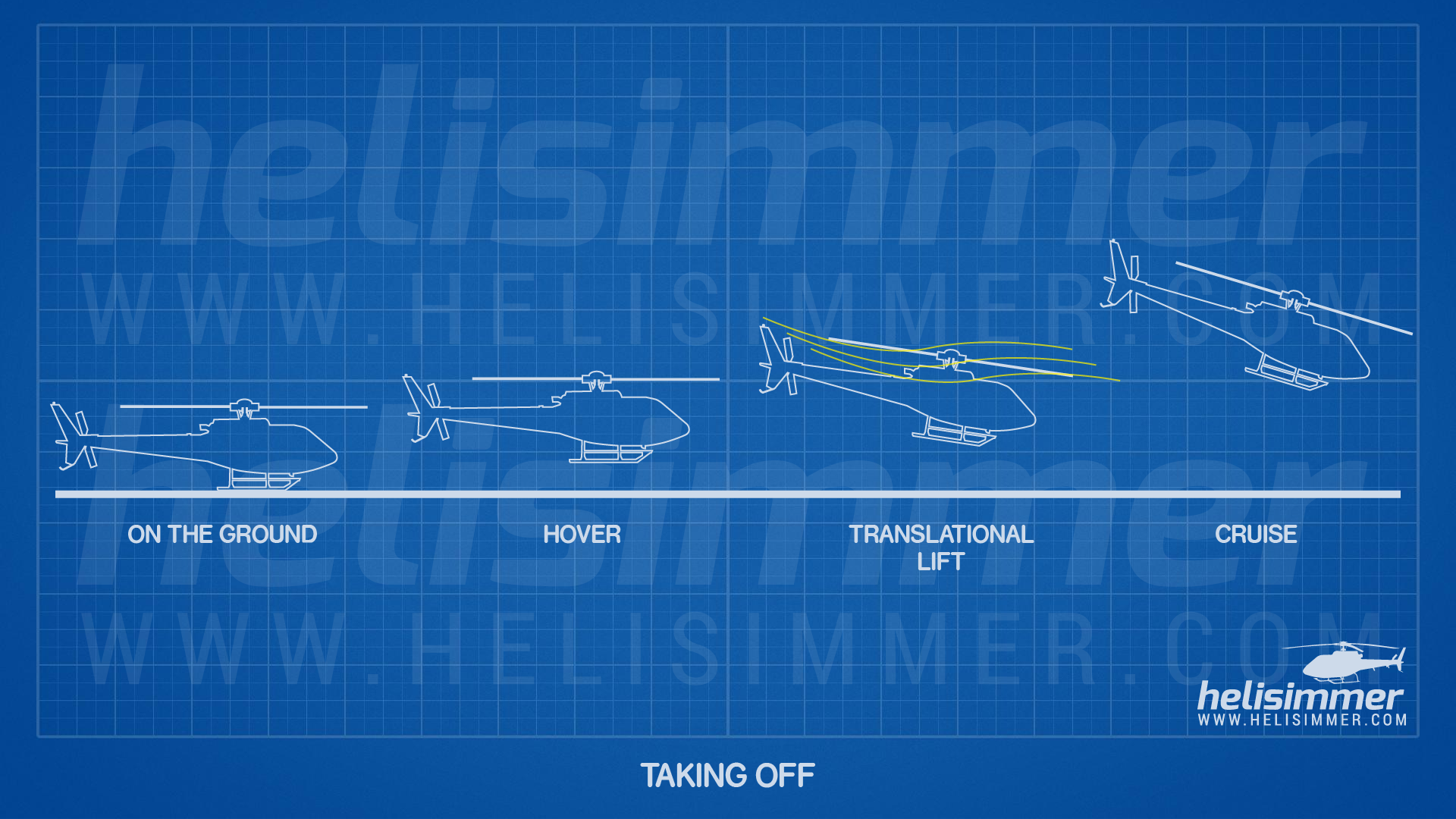 Taking off in a helicopter can be broken up in 3 stages: hover, transitioning and cruise.

I won't go into much detail on the hover as you can read all about it on a previous article. You should place yourself in a stable hover for a few seconds, check your instruments to see if everything is within the required parameters. If something goes wrong, you'll be able to settle back down safely.

The next part of the takeoff is the transition. You should pull the collective a bit to gain more lift and gently push the cyclic forward.

This will put you in a forward motion and you'll start picking up speed. Do not push it too hard and try to gain speed too fast. Keep everything gentle and under control. Between 16-24kts you will notice the helicopter will "pop-up" a bit as it gains more lift.

That's called "transational lift" and it's a phenomena that happens as the air flows through the blades of the rotor. So, when a helicopter is in motion at speeds over 16kts, you'll get increased lift (more lift for the same amount of collective), which is rather cool! 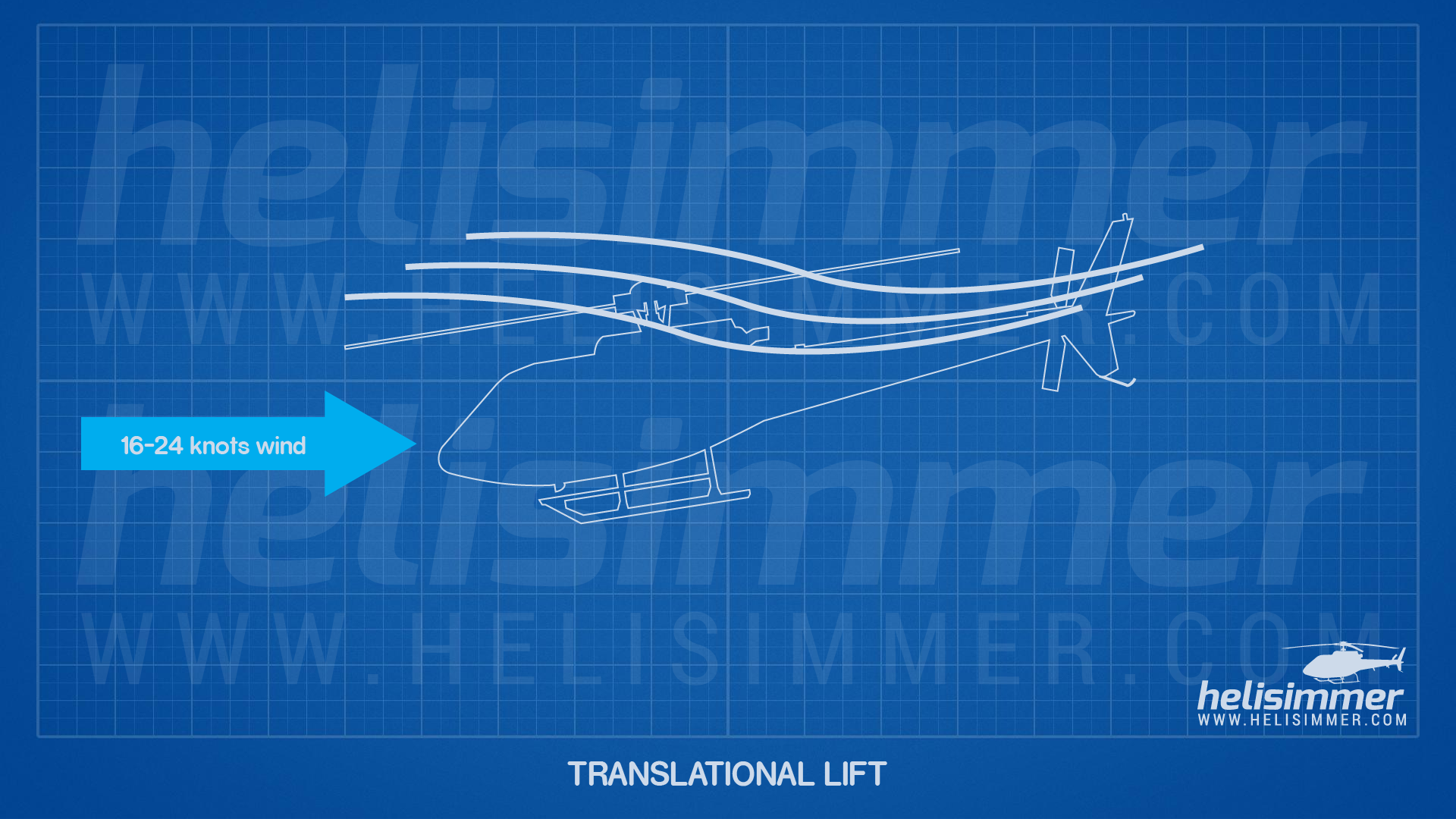 I will not go into all the physics and the details -- to be honest I don't know them all. Perhaps we'll have an article about it written by someone that knows a lot more about it than me. All you need to know right now is that translational lift is there and it will help you.

After passing through this stage, you'll enter the cruise stage.

Cruising is all a matter of keeping your horizontal and vertical speed under control.

There's a tendency to overuse the collective when you are trying to control your vertical speed. While that's OK for when you want to perform big changes in altitude, you'll be better off using the cyclic for minor adjustments.

Yes, you will gain or lose a bit of speed but that's usually better than going up and down with the collective and have those extra forces (such as torque) to control. You don't need the extra load.

Keep in mind that you should move all your controls in such a way that you don't over-control the helicopter but you should keep it under control the whole time. So you cannot be too hasty or too slow. It's quite an hard balance to achieve and fixed-wing aircraft are usually a lot more forgiving.

So, off you go! Get into a hover, push your cyclic forward and have fun! Experiment a bit with both the cyclic and the collective to see how it influences your flight.

On the next article we'll learn how to settle down and land.

I’d like to thank Joe Hudson for all the help and support while writing this article.