Helicopter controls, although somewhat similar in shape, are quite different from their fixed-wing counterparts. If you’re like most simmers and come from a fixed-wing background, get ready: things are about to become fun (and perhaps a bit weird). 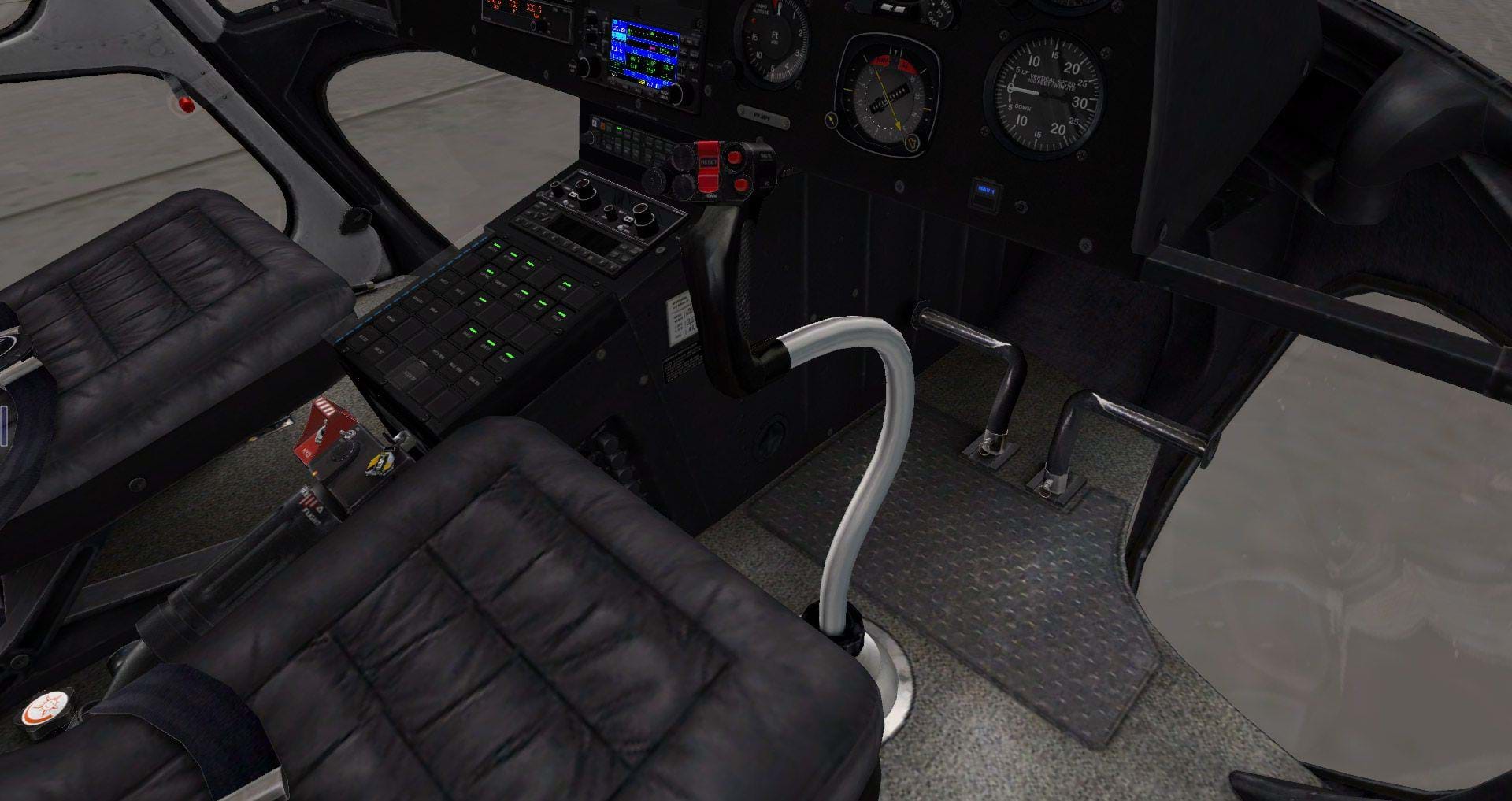 Now that we got to know the outside of a helicopter, it’s time we look at the cockpit and learn how is it that we can control helicopters.

Flying helicopters requires you to master these controls all the time and any changes in one of them usually requires you to do changes on another one or all of them together.

Helicopters have 4 controls, of which can be considered the main ones: the collective, throttle, cyclic and pedals. They will all help you control your helicopter in all axis.

Let’s start, shall we?

The collective can be found on the left side of the pilot (and co-pilot’s) seat. It’s a kind of a lever which you can move up and down. It moves in a similar motion to a parking brake in some cars.

The swashplate, on its turn, controls the pitch of the rotor blades. The more pitch the blades have, the more air they “bite” and the bigger the lift they produce. You can see it all working on the video below.

Therefore, raising the collective increases lift and lowering the collective decreases lift. In a very simplistic way, you could see it as the means to increase or decrease a helicopter’s altitude. It’s not that simple though, as we will see further down the line. Nothing is, really, but that’s what makes helicopters fun to fly.

Nonetheless, when you increase the pitch, drag increases and the RPM tends to go down so the engine must move faster to keep up.

On most helicopters, we will not be using the throttle a lot since they are equipped with a governor.

This handy piece of equipment monitors the engine’s RPM and controls the engine as to maintain it within the require parameters. On helicopters equipped with a governor, we usually crank the throttle up as per the checklist and don’t touch it until we land and/or shut the engine down.

The cyclic is basically “the stick”. It’s the most visible control and the one people identify better as something that controls a helicopter.

Instead of moving the swashplate up and down in a uniform way, the cyclic controls the swashplate so that the lift is not even. When you push the cyclic forward, the lift will increase on the back of the helicopter. If you pull it backwards, it will increase in the front of the helicopter. If you push it left, it increases the lift on the right side and vice-versa.

What this does is allow you to move the helicopter in those directions. That’s right: in order for a helicopter to move forward, you will need to push the cyclic forward. If you come from a fixed-wing background (and most of us do), it’s counter-intuitive. We are used to crank the throttle to move forward and push the stick to pitch down, right? Not in a helicopter.

So, the cyclic allows us to move in these 4 directions: front back, left and right. In time, and with a lot of practice, we should be able to do it smoothly and place our helicopter in tight spots or land in pinnacles, top of buildings or even a dolly!

There are several different helicopter designs: helicopters with 2 co-axial, tandem or intermeshing rotors, single rotor with no tail rotor (NOTAR), etc. We’re keeping things simple so we’ll assume all helicopters have a main rotor and a tail rotor. The principle of the anti-torque pedals is basically the same.

So, in this world where all helicopters share the same design and all of them have a main and a tail rotor, the anti-torque pedals control the tail rotor.

If you’re wondering why is it that they’re called the “anti-torque pedals”, the explanation is simple.

You see, when you pull the collective up, lift increases but so does the blades drag – we’ve seen that before. The engine has to move faster and more force (torque) is applied to the transmission of the helicopter, which is in the fuselage. According to Newton's 3rd law: "for every action, there is an equal and opposite reaction". So the rotor spinning in one direction will make the fuselage spin on the opposite direction.

To counter-act this spin (or to act against the torque), we use the tail rotor. We’ll see more about this later.

As you can see, the controls are pretty simple and they all make sense: they have a purpose in helping the helicopter in all directions.

In the next article, we will see how they all work together and, from there, we’ll learn how to take off, hover and all the other basic maneuvers.

I'd like to thank Joe Hudson for all the help and support while writing this article and, in particular, by adding some technical insight in order to make the videos be a bit more clear and realistic.