Mar 23, 2017 | by Sérgio Costa
Tutorials, Basics
How to fly helicopters, approach, landing
We are nearing the end of our basics tutorials. We have learned quite a bit so far and now it's time to tackle the approach and landing.

I've always seen approaches and landings as the most challenging part of flying in a simulator -- be it fixed wing or helicopters.

The whole concept of aligning the aircraft, configuring it, setting the speed correctly and glide to the ground was something that was not easy for me to grasp as I gave my first virtual steps into this world. I think it's something a lot of us struggle with in the beginning.

Helicopters should be easier, right? After all we can even stop mid-air if necessary so everything's a bit more manageable, which should make landing these machines less of an hassle.

Sure. Only it's not quite like that. Yeah, really. Nothing's easy when it comes to helicopters, is it?

In a sense, the approach is a bit easier than when performed with a fixed-wing since, in a helicopter, you are not forced to maintain a minimum speed so that the aircraft keeps itself in the air (as opposed to entering a stall and crashing into the ground). So, that part's easier.

For now, think of descending vertically as a big no-no. Trust me on this.

So, how do we perform a nice approach? First of all, if you are looking into magic numbers, there aren't many. I won't tell you to start your approach at X miles and Y feet and descend at Z feet per minute. What I will tell you is: start your approach at a comfortable distance from your landing spot at an altitude that will allow you to descend smoothly and safely. Also: always try to land while pointing your helicopter's nose to the wind. Don't forget helicopters love (and try) to keep pointing towards the wind so that's will help you keep your aircraft stable.

Reduce your speed so that you don't have to lose a ton of it over your landing spot. I usually start my approach a mile or two away from my landing spot at a speed of 60-80 knots. 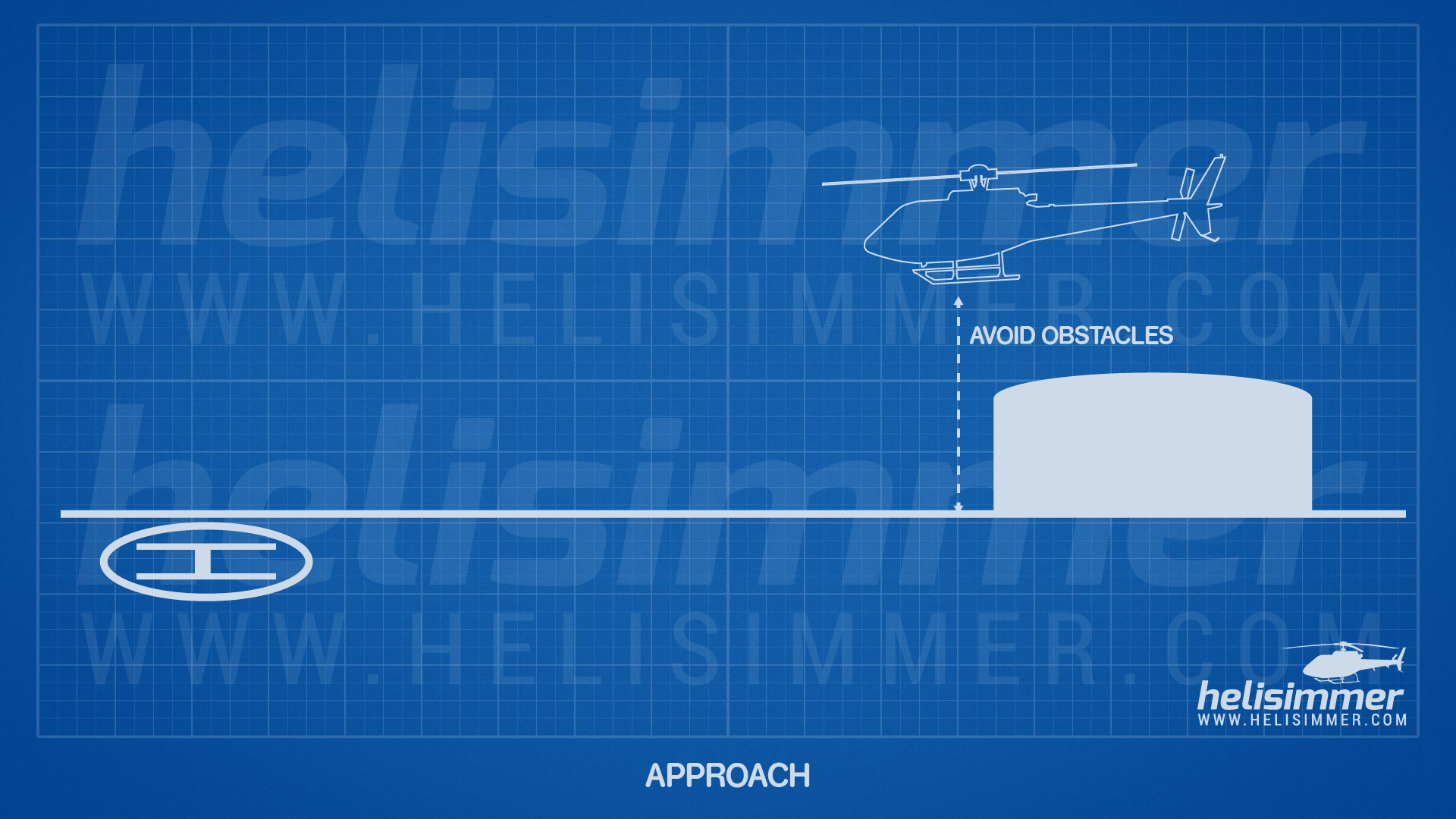 From there, I slowly move towards my landing spot, keeping an eye for any obstacles and preventing my speed to go up from 60 knots. Things can go south very quickly if you let your helicopter pick up too much speed at this time and you may need to go-around.

As I approach my LZ, I start reducing my speed. And this is where the next part begins.

Transition to hover and touchdown

At such low speed we need to control our collective quite a bit more. By now we should also be in ground effect, which will help us a bit. The helicopter will also want to wobble a bit more since we lost a lot of our speed (making it more unstable). The dance starts and both our feet and our legs will be all over the place trying to balance the helicopter and settle us to a hover. 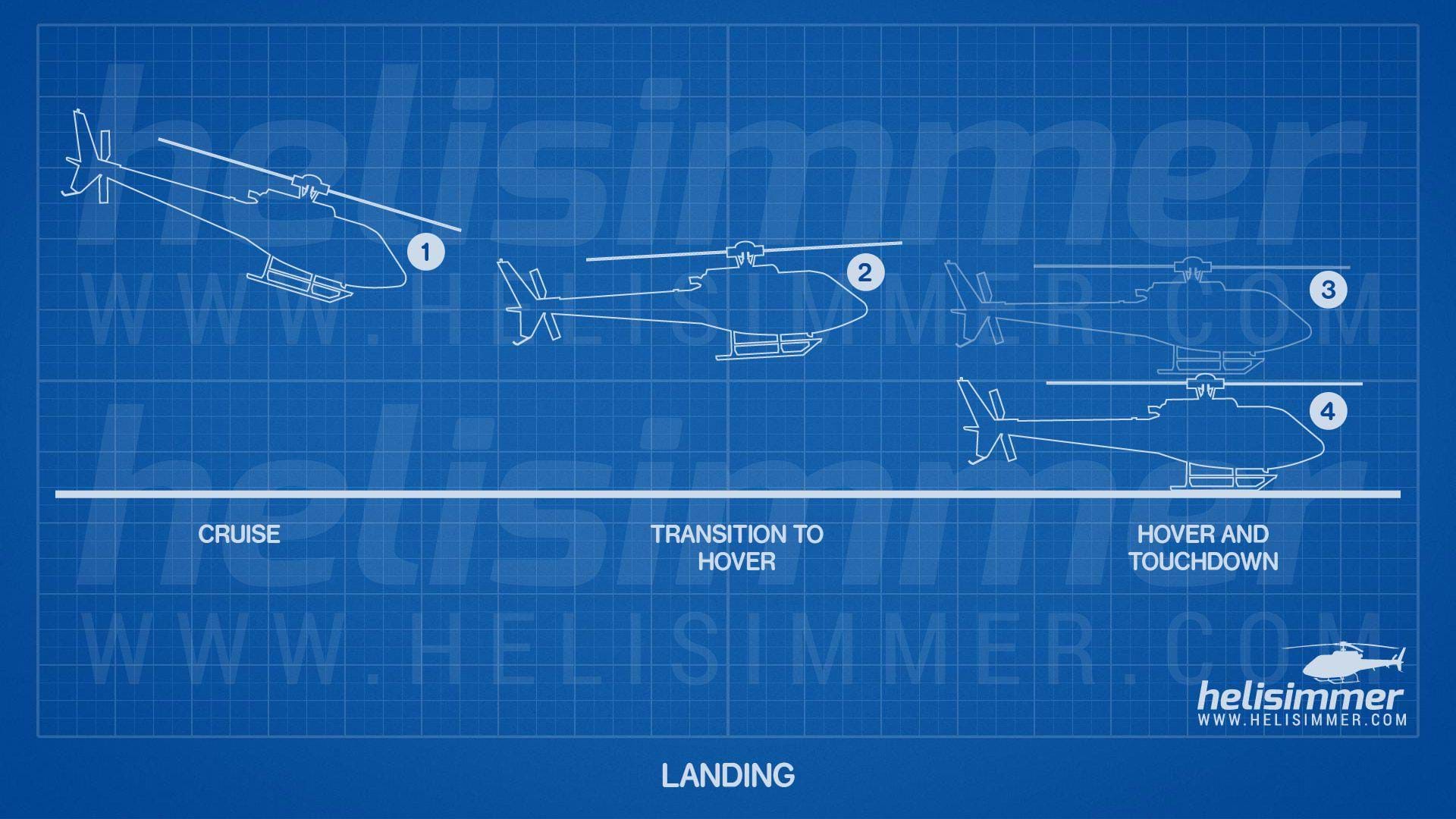 Once over the landing spot, we should stop all horizontal motion and hover the helicopter. Once we are satisfied with our position, we should slowly reduce the collective and let the helicopter settle down. Trust me: it's easier said than done and you'll have to go through quite a bit amount of tries until you nail it -- kinda like with everything else, so there's nothing new here.

Once you feel the helicopter's skids settled on the ground, fully lower the collective to prevent you from moving (or flipping over).

I’d like to thank Joe Hudson for all the help and support while writing this article, as well as the landing video.