Goodbye, HoverControl, you had a heck of a run

HoverControl has always been a landmark in the helicopter flight simulation landscape. A few days ago, though, it went down. 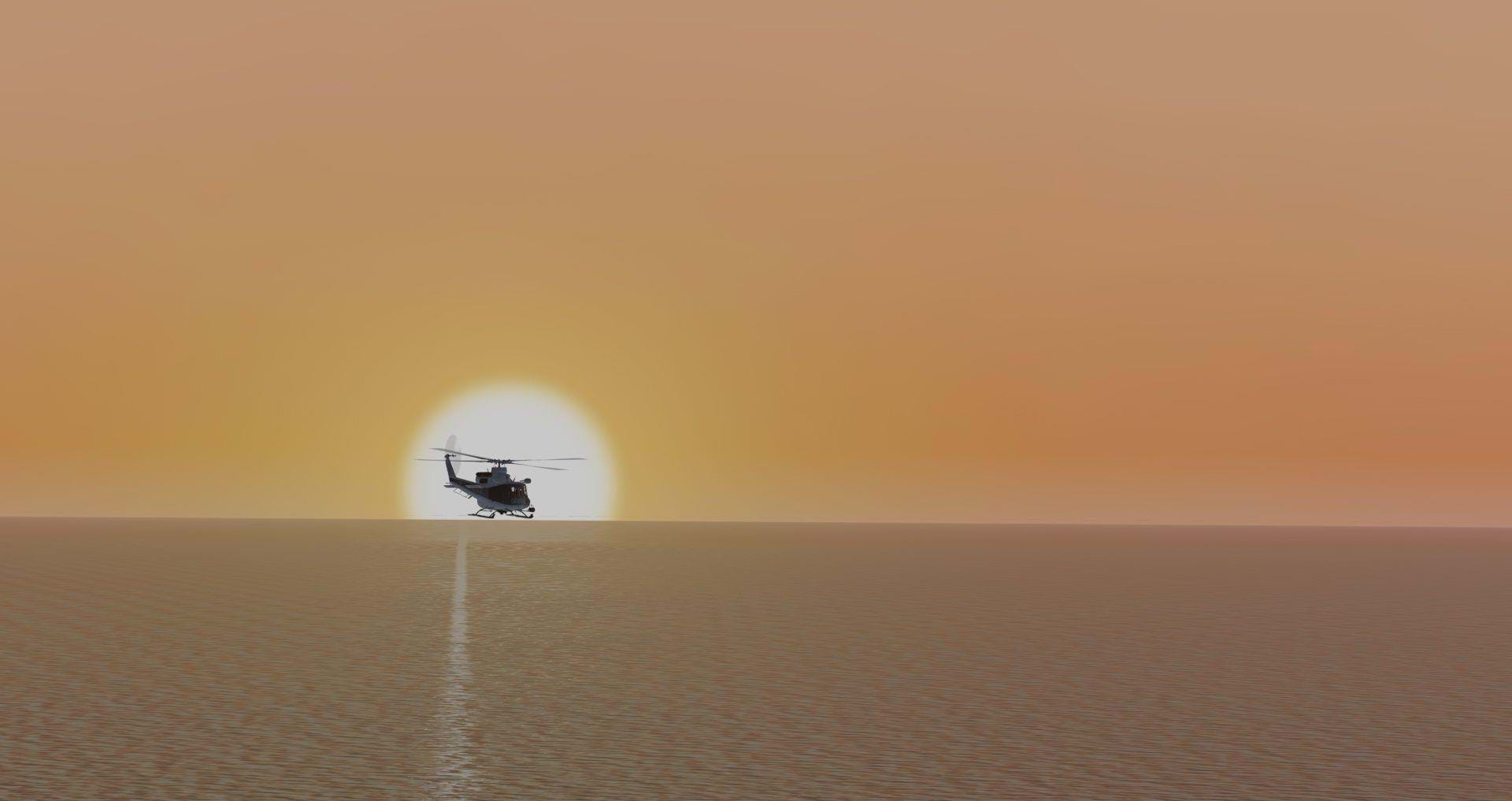 Back then, FS2002 came out. It brought a few of new features such as ATC and AI aircraft. Microsoft had already added a helicopter back in 1997 (the Bell 206 JetRanger) and a lot of us were struggling to fly it for some time. X-Plane also added their first helicopter around this time (perhaps in version 3, also in 1997?).

I don’t remember exactly when was it that I joined HoverControl but I do remember very clearly the joy I felt when I realized that not only there were others out there that were interested about helicopter flight simulation but there was someone going through the trouble of having this great resource available for all of us to learn from.

HoverControl had flying lessons, articles on how to set things up, a training program and, perhaps even more important: a thriving and helpful community. 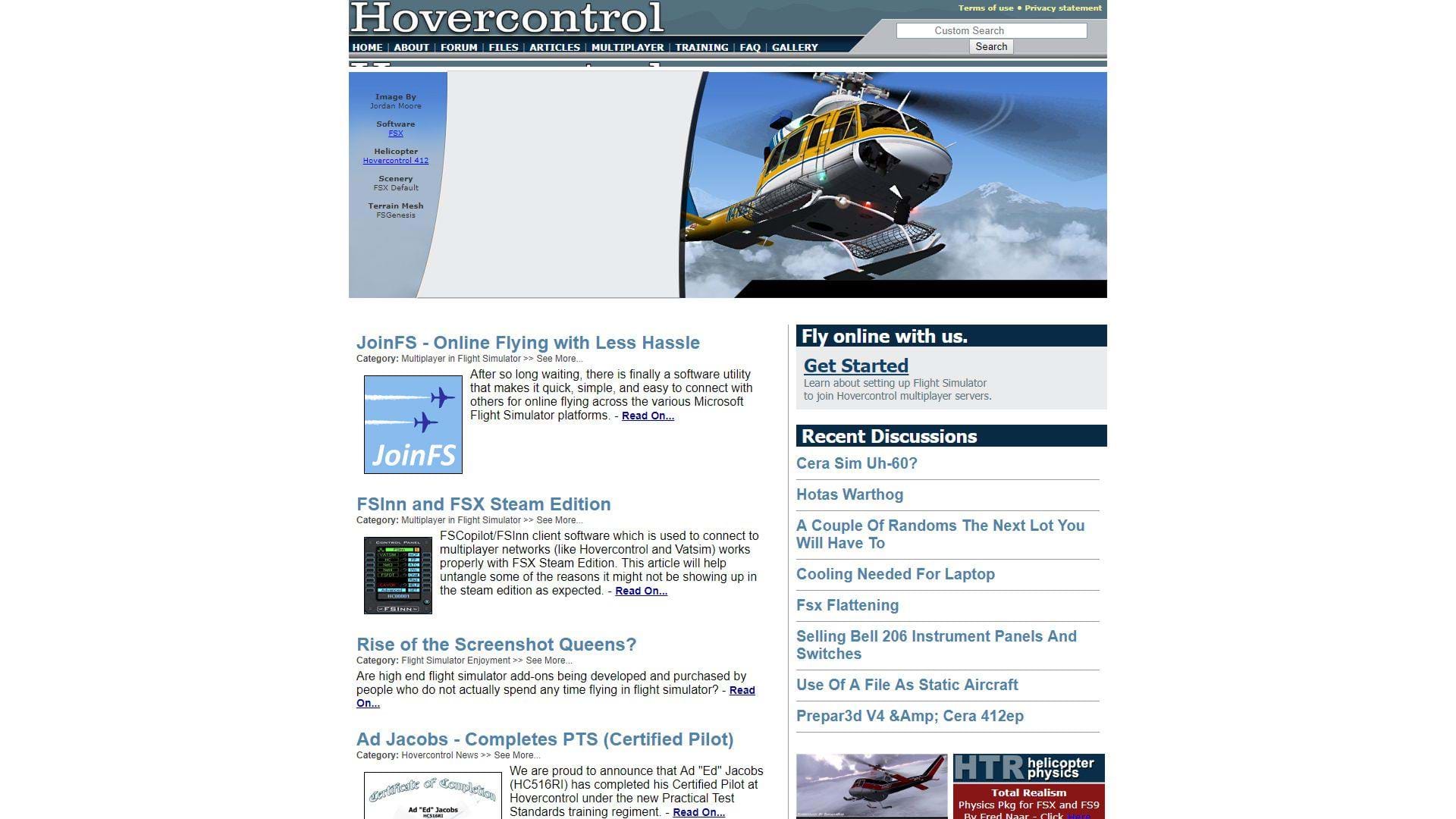 It was a place where we could discuss about our passion for the hobby and learn from each other. A lot of folks I know today in the simulation landscape are still very active today. Some of them, such as Chris Ryan (Ryan Aerospace), Christopher Wiebe (Pro Flight Trainer), Richard Price (Komodo Simulations), Mark Hungerford (Rainman Automation and Simulation) and Shawn Lund (Wildfire Training Solutions, Inc.), have their own simulation-related companies – curiously, most of those companies around helicopter flight simulation hardware (which is well needed).

Some of those contacts exist until today and even became friendships (as much as possible given the distance between each other). 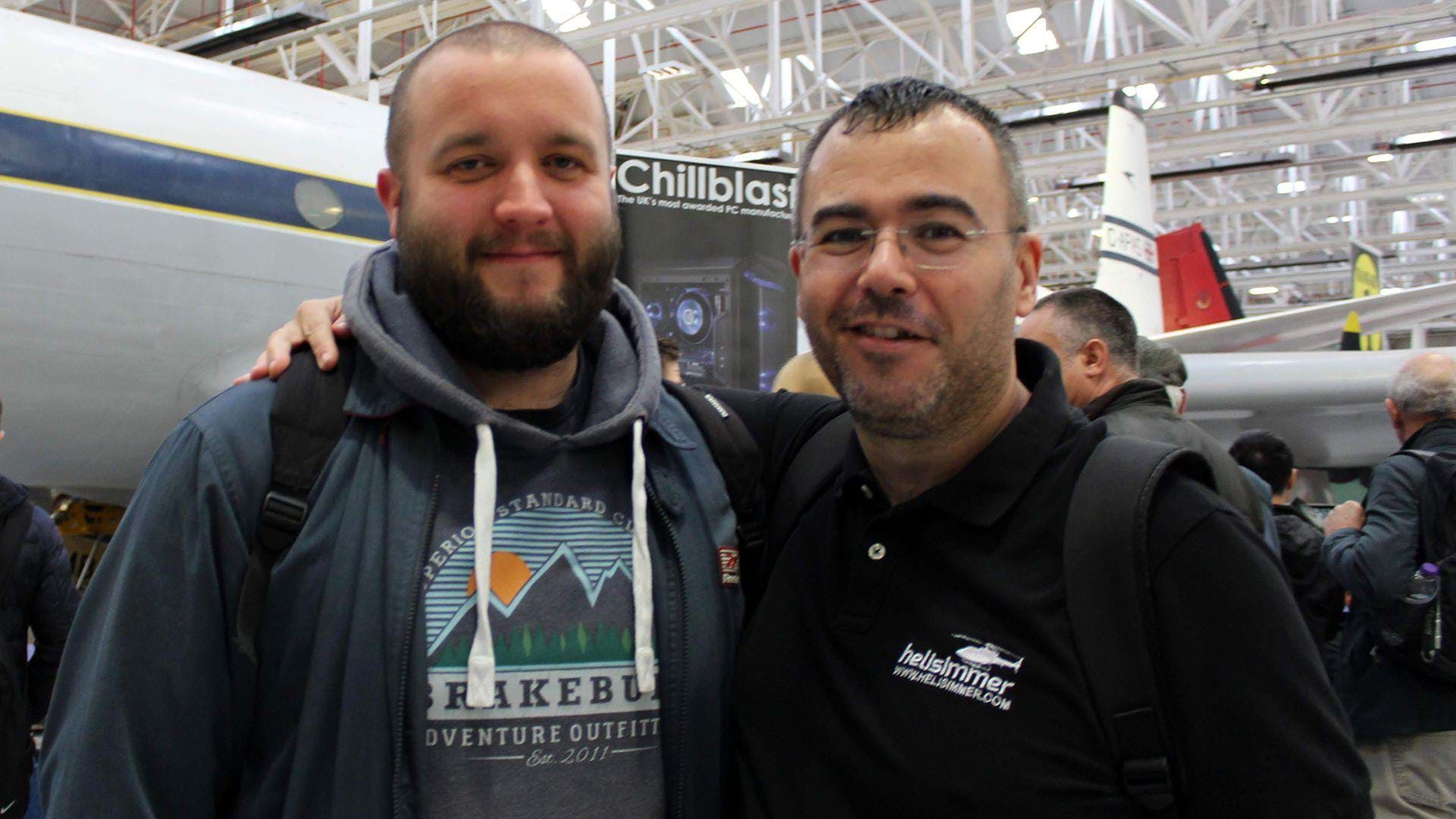 Above: me and Laurie Bennett (known as SeaKing61 at the -- now extinct -- HoverControl forums)

HoverControl helped me actually learn more about helicopters, how they work and how I could get them to do as I pleased. Well, kinda. But I WAS learning a lot and getting better and better.

Jordan Moore and the team around him and HoverControl were spearheading the community, educating simmers and overall making the hobby much more fun and interesting.

I owe a lot of my passion for the hobby to Jordan and HoverControl. If I hadn’t found the website, if I didn’t have all the resources available and the community to back me up, I would probably never get to enjoy simming as I have been enjoying for so long and HeliSimmer would not exist for sure.

Although in a different format, I wanted HeliSimmer to be a way to support the community and educate people about helicopters and how to fly them. Jordan and HoverControl inspired me to do so and I cannot thank him and the team enough for all the amazing work, dedication and time they offered to the community.

Today, HoverControl is down. Although non-officially, we have learned that it’s out for good. And that makes me really, really sad.

HoverControl was a place for learning and, for many years, my “virtual home” as far as online communities go. I spent hours on the forums, met a lot of amazing people and learned a lot.

To you, Jordan, goes my absolute gratitude for HoverControl. I’m glad it was such a big part of my life and the hobby I love so much.

Thank you, HoverControl. You had a heck of a run!

It is a little hard to describe what HoverControl meant to the community and to me personally without some context.

Let’s go back 17 years ago just before HoverControl was founded.

I was a veteran, project manager, engineer, avid PC gamer, and father. I played all genres of games and had quite the collection. At the time it was primarily combat FPS type games. Then September 11th happened. The country and I were personally reeling. The number of folks I knew within one or two degrees of freedom that we directly affected hit me hard. Add the fact I had back injury that would keep me from re-entering the service to join the fight did not leave me in a happy place mentally.

Additionally, my wife noticed my 5 and 6-year-old sons playing in the backyard imitating what they saw in the games I was playing. At her request I put the violent games away and went seeking something else to occupy my play time.

I was no stranger to flight simulation. I started with a Commodore 64 in 1984. I had Microsoft Flight Simulator, all the MicroProse titles for the C64 and eventually the PC. So, off to the store I went to buy a new copy of Microsoft Flight Simulator (MSFS) and a joystick. I figured I could get back to my aviation roots (they stretch back to WW2 through my grandfather, then my own service) and it would be a good way to educate my growing boys on flight.

The first thing I noticed was the addition of the Bell JetRanger. The second thing I noticed was that I sucked horribly at flying it and it was nothing like my real-world experience. I began poking around the web looking for anything that could help me master this virtual beast. While there were quite a few sites dedicated to MSFS, the vast majority were dedicated to fixed wing aircraft. I did find a few that were dedicated to helicopters. They had aircraft and scenery downloads but not much in the way of advice.

In my Internet trolling over the Thanksgiving holiday that year I discovered a new site: hovercontrol.com. It was so new I don’t think it had even 50 people with forum accounts. I started exploring and checking the site daily as a lurker. I was totally impressed with the approach to flying and flight simulation.

This was not just aircraft and scenery downloads. Their approach was unique and holistic. The site had forums and articles across flight dynamics, aircraft modeling, aircraft repainting, scenery building, and software development. They had training, not to be a real world pilot, but training to make you a successful simulation pilot. You could connect online and speak with an instructor one-on-one. Where other sites had bits and pieces this was the first site that was all-encompassing and solely focused on helicopters.

On January 2002 I finally created a real account. If you would have told me then what that one simple act would have meant to my life as a whole, the knowledge I would gain and share, the relationships and bonds I would forge, I would have laughed at you.

I moved pretty quickly earning my Certified Pilot, then Instructor Pilot and eventually becoming a Staff member. We founded a flight demonstration team called the HoverControl Hawks. One of the guys even got us shirts. We used to spend hours formation flying and trying maneuvers. Countless hours were spent flying, tweaking, install aircraft and scenery.

I provided remote tech support and troubleshooting to more than a few members. It was a solid, core group of us sharing our hobby and quite a bit of life. Everything from the unfortunate passing of a family member, the birth of kids, or in some cases grandkids, to my back-to-back layoffs in 2009 and 2012. We supported each other. After that last layoff for me in 2012 I was very fortunate to find my dream job. HoverControl was a big reason for that as it allowed me to keep my technical skills sharp and relevant.

Obviously, the site and the hobby went through a lot of change over those 17 years. Microsoft released Flight Sim 2004, at what I consider to be the peak of the flight sim hobby. Because of HoverControl’s reputation a number of us were invited to participate in the development of Microsoft’s FSX and FSX Acceleration. We provided our expertise to numerous other aircraft, scenery, and software development efforts for a wide variety of developers.

With Microsoft’s missteps in FSX interest in X-Plane, with its different approach to flight dynamics and graphics,  began to grow on our site. We did a full site refresh and added new online flying server technology that also tracked flight hours. Jordan even built his own mission system. With all the projects and change over the years there is one project I am most proud and fond of, the HC412. 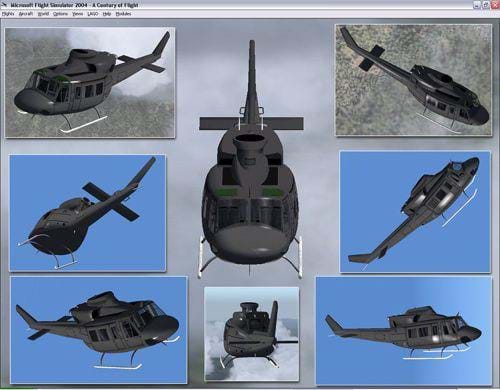 Fairly early into HoverControl’s history Jordan made a model of the Bell Huey, an aircraft very near and dear to a great many helicopter enthusiasts. Jordan decided to do a follow up of that aircraft and decided to model Bell’s follow up, the twin engine, four bladed version called the Bell 412. There was a significant twist though. Not only was he going to create a beautiful, framerate friendly model, with the advances afforded to him with advancements in MSFS, he decided to accurately model systems as well.

A key part of that was an accurate dual engine start up and shutdown procedure. Hundreds of hours of research, development, and testing went into that project. Hundreds more were spent by the training team and staff after it was released to the community helping members master the simulated systems and procedures. All of this was free to the community.

Time continues its merciless march on. Microsoft stopped development and sold off portions of the flight simulator code. Lockheed bought the commercial side and has published Prepar3D. Dovetail games bought the consumer side and republished FSX Steam Edition. X-Plane has continued to flourish.

Even with that, the once vibrant flight simulation hobby has continued to shrink. Additionally, I would be remiss in not mentioning that technology has changed over that time as well. Social media has replaced more than a few dedicated, specialty web properties. There is also the fact that the vast majority of media consumption today is on mobile devices. They are certainly less than ideal for the type of flight simulation that we used to enjoy.

While I am saddened by the retirement of HoverControl I agree it was time for it to go. I am forever grateful to Jordan Moore for building it, the contributions it made to the flight sim community, for the enduring friendships I have made that span the globe, and the countless hours of enjoyment it provided. I raise my glass to you sir and wish you well in all your future endeavors. 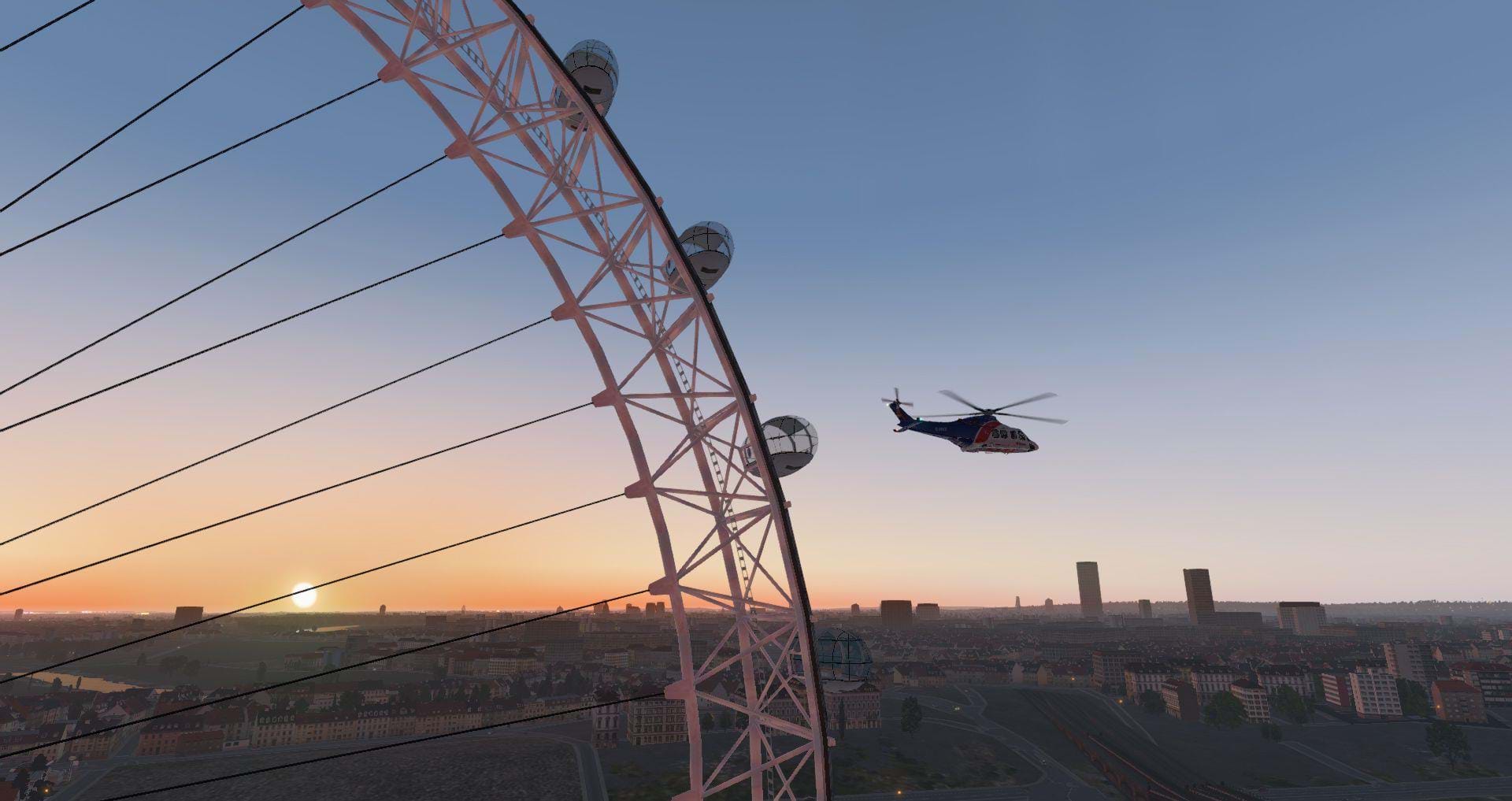