We continue to take a look at hardware that will help you take better control of your helicopters without breaking the bank. This time we will check out a couple of pedals.

On Part 1 we covered the main part of your controls: the joystick/throttle combo.

This combo is usually also comprised of a way to control the anti-torque pedals (rudder pedals for our fixed-wing friends), be it via a twist grip or another way.

This is just fine, and I have, personally, used both these methods for years. But I always felt I was not having the control I needed to have.

By using your hands to control the anti-torque pedals you not only usually have a smaller travel length (which means you get a bigger movement in the sim for a smaller movement in your stick) but you are adding a bit more of force to your wrist and hand as well, which will make you lose precision.

Does it cut it? It does. But it’s not perfect.

I will tell you this right away, because you will go through this and you will curse my name when you do.

If you never used pedals before, you will probably find it very hard to get the hang of it. It will be hard, awkward and you will wonder how is it that humans can do this.

After years of using a twist grip/buttons on the back of the throttle, it was pretty much impossible for me to get a hold of it. It took me some time to get used to.

But once I finally did, I started doing a much better job.

Transferring the responsibility from my arms to my legs allowed me to have more precision with both. I wasn’t doing too much with my hands anymore nor applying different forces (for example, moving the stick as a cyclic but also twisting it – which forced me to change the way I moved the stick). Add this to a centering spring (before getting the X-45 [/tips-and-tricks/making-your-joystick-more-helicopter-friendly]), and it was mayhem.

Not only that but pedals allowed me to have greater control since the travel length is bigger. So, I could make smaller, more precise movements, which prevented me from over-controlling the helicopter.

Believe me, when I say this: rudder pedals make a huge difference. 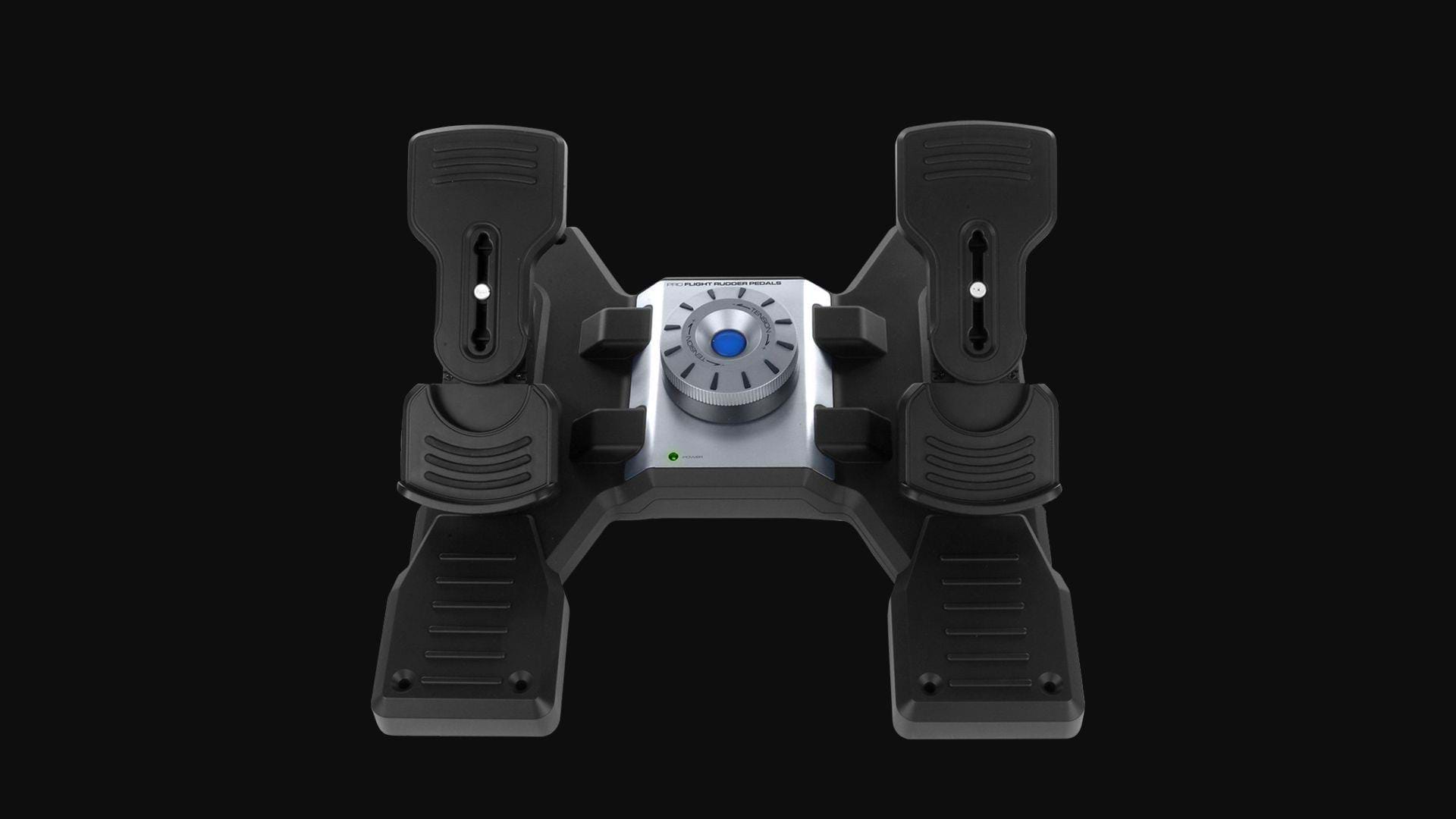 The pedals that I have used for many years are not this model but the Combat Rudder Pedals. Those were amazing pedals, with lots of metal parts, quite precise and very sturdy. Unfortunately, Saitek/Logitech stopped selling those.

But the Pro Flight Rudder Pedals were its little brother and I have tried them a few times.

These are made of plastic, but they feel very nice and, like the ones I used to have, you can adjust the tension, making it easier or harder to move them.

As a bonus, you’ll also get toe-brakes, so the pedals actually have 3 axis. The distance between the pedals is also quite comfortable.

While not brilliant (and definitely not in the same league as the Thrustmaster TPR ), the Logitech Pro Flight Rudder Pedals are a great choice and not terribly expensive. You can get these for less than $150 on some stores.

Easier on the wallet: the Thrustmaster TFRP rudder pedals 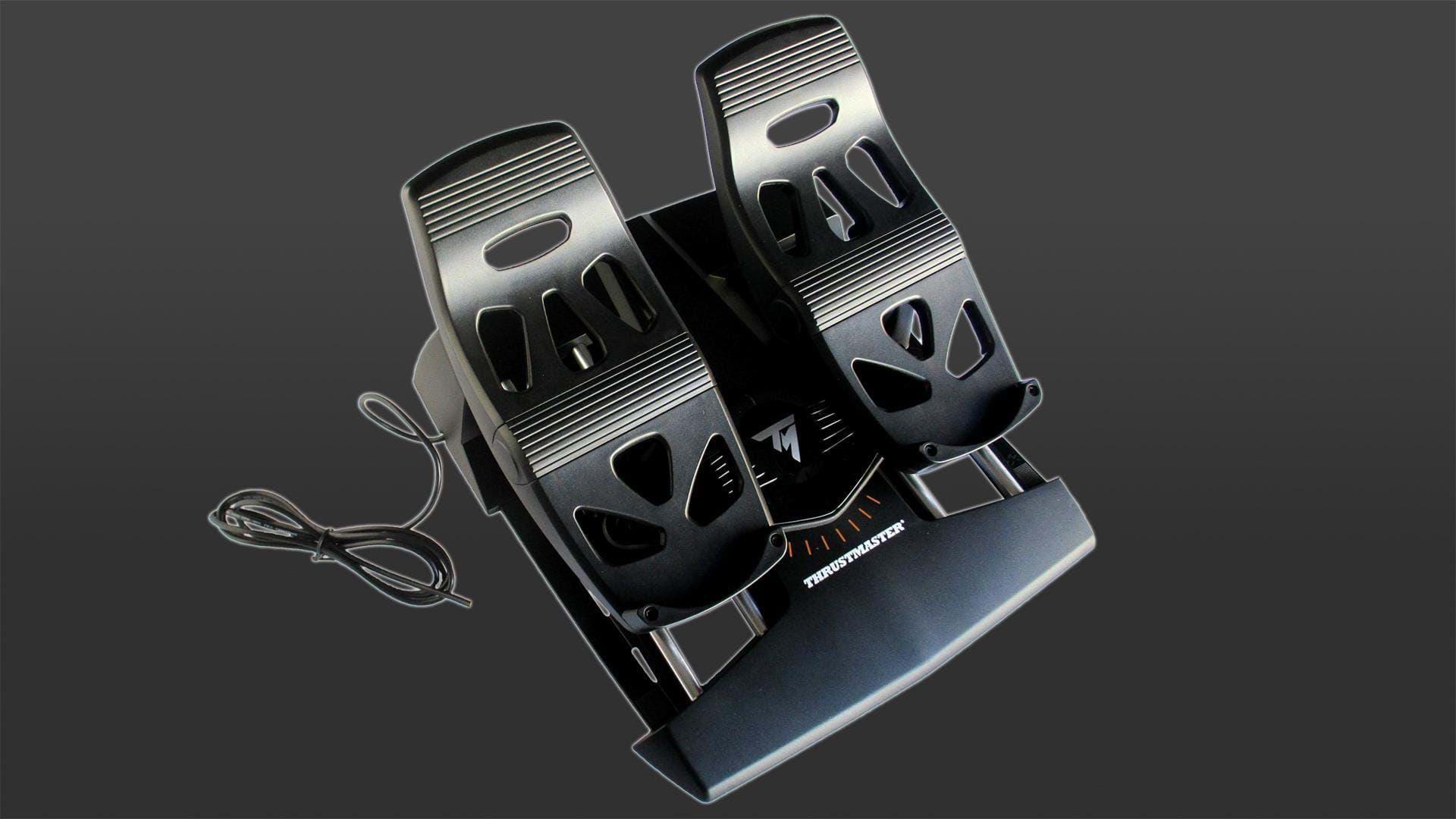 Back in 2016, I reviewed the Thrustmaster TFRP pedals and I was nicely impressed by it.

It not that’s a remarkably set of pedals but, for the price (you can find it for less than $100), it’s a surprisingly good set.

They are precise and, despite the distance between the pedals (which I think should be a bit bigger) they are comfortable.

For anyone starting in sims and wanting a kit that won’t break the bank, this is, definitely, the piece of hardware to look at. But, bear in mind, you might want to go into a bigger league further down the road. Nonetheless, the Thrustmaster TFRP pedals should be enough until you do so.

What about other options?

There are a few other options out there in the market and a few of them are priced quite nicely.

However, I cannot and will not recommend hardware I haven’t tried myself. I don’t have a huge history of pedals (and not all manufacturers send me their stuff to test) but I was fortunate enough to be able to try some of the nicest sets out there, that fall into the “on-a-budget” category.

I am sure a lot of other simmers out there will be able to help you out with alternatives.

All I can say is that these are my recommendations based on my experience. I hope this helps and, if you’re on a tight budget. These will help you.

You can find Part I here.