Virtual Reality: has it landed?

This author of this series of articles used the Oculus DK2 developer kit. The consumer version due to be relea

ed later this year promises lower latency, greater comfort, and almost double the pixel resolution. The author tried to capture what it actually looks like through the optics where possible rather than take frame-grabs from repeater windows which often look much better than in the headset. The nature of the photography also degrades the quality further but should give some impression of the visual quality. Again, this is from a developer kit. 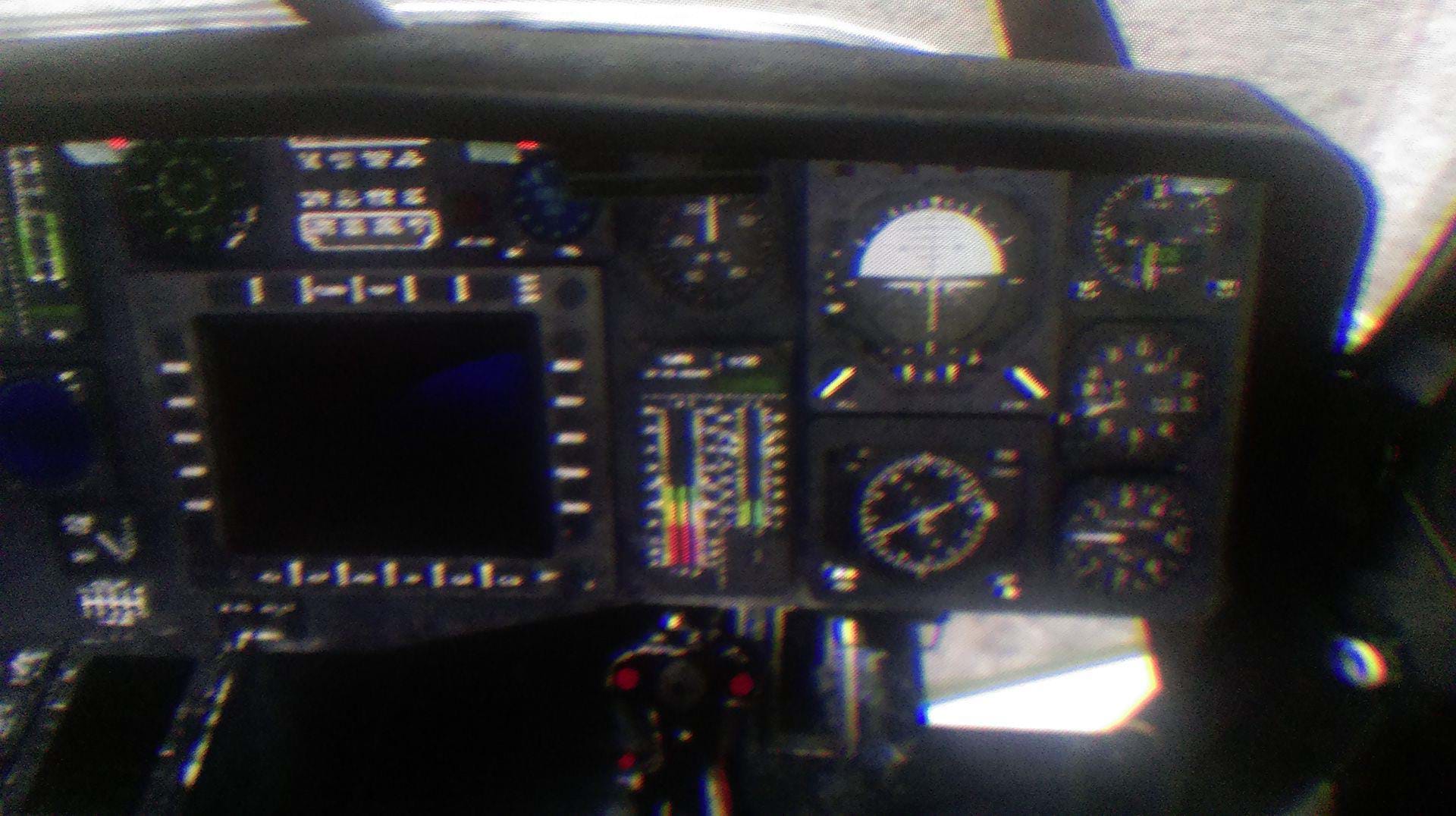 2016 could be the breakthrough year for Virtual Reality on the PC as three-consumer grade units prepare to launch in the first half of this year; Facebook backed Oculus Rift, Valve with the HTC Vive and seasoned PC peripheral manufacturer Razer with the OSVR (open-source virtual reality).

This January, days before the 2016 CES in Las Vegas, Oculus fired the first salvo in what is going to be an interesting tech-year by announcing Rift pre-orders at the sticker-shock inducing price point of $499 USD (before taxes etc.) Actually, the price reveal was more controversial as you did not know how much it was going to cost until you actually pre-ordered one. The Oculus store traffic surge resulted site malfunctions and a patchy ordering process. Those that did complete a zero-hour pre-order and only then saw the cost took to social media to express their shock at the price; those in European countries were looking at close to $799 all-in. The following days saw an impressive amount of damage control and debate over the Rift cost. At time of writing HTC has yet to announce price points for their packages while Razer is still offering OSVR developer kits at a more pocket friendly $299 however, supply is limited. Each of these kits appear to have their own pros and cons, all would be wise to consider the technical details before making the investment. Not all VR devices are created equal. The Rift uses two custom made screens for optimum quality but they clearly focus on a sit-down experience. The HTC Vive requires two external laser beacons in addition to a front facing camera, to date most demonstrations focus on stand-up experiences, it’s clear that they want people hopping around living rooms, something Kinect failed to do. All that extra hardware will bump up costs and we don’t yet know what the final screen quality will be like. OSVR specs are close to DK2 but interestingly Razer have said that this will be upgradable due to the modular construction.

The commercial success of virtual reality will hinge on whether there is enough compelling software to keep people interested. Oculus and HTC seem to be mirroring the long-term game of the console market, sell hardware at a loss until costs come down and build up the infrastructure, the content portals.

Flight simulation enthusiasts do not need an excuse to try fringe hardware, they are tech savvy, manage their own content and categorised as a niche group who are keen to invest in hardware that supports their interests. In principle, virtual reality should be the perfect match. 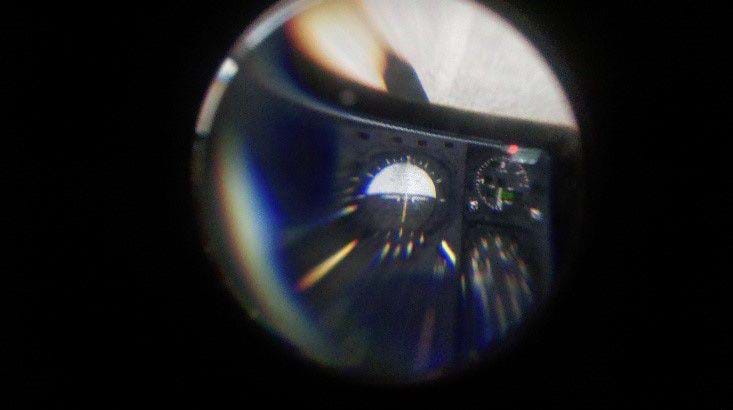 Why should we care at all about VR at all? In 2001, NaturalPoint Inc. released the first generation TrackIR device; this optical head-tracking unit changed how thousands interacted with games by translating the users natural head movement to game camera rotations. VR has potential to be even more disruptive and a new format. It provides a new way to experience flight simulation in a way that has not been possible until recently. Is it good? Yes, without any doubt, it really is an amazing experience. With thirty-five years of gaming experience, this last year has provided me with some of the most amazing and immersive gaming moments of my life. Is it going to dominate consumer flight-simulation? I am not yet convinced; it has a place but I do not think there will be a mad rush to replacing physical cockpits or giant screens for a long time.

Looking at a 2D screen, depth perception is abstract information derived from parallax motion and numbers, in VR depth is instantly apparent, it is instinctive, it feels natural.  This is what people mean when they use the term “presence”. It feels totally natural to be in that space. Once you put on a VR headset and experience it, you instantly get why this second generation of VR technology is compelling. You often hear descriptions along the lines of “You ARE in the cockpit of <blank>”. These are accurate statements but temper this with the knowledge that a headset cuts you off from the outside world so operating keyboards, cockpit controls or reading documents requires lifting up that headset or peeking through gaps in the bottom.

Virtual reality headsets should be thought of as high-end wearable gaming monitors with motion tracking. The price of entry not just the cost of the headset, a lot of CPU and graphics power is required to run at frame-rates double what some simulation enthusiasts are comfortable with. Without smooth frame-rates that feeling of “presence” is easily shattered. And even juddering brought on by data streaming can be enough to cause a momentary feeling of slosh nausea if you happen to be moving your head at that moment. The sweet spot for frame rates is a wallet squeezing 75fps which matches all my personal experiences so far across a number of simulations. Anything below that and you might as well take the thing off your head and gaze into the disapproving eyes of your spouse and children. Fortunately, there is a way of reducing latency when moving your head. The Rift and Vive use different techniques but both perform asynchronous image updates to keep the displays updated faster than the simulator fps. Oculus use a technique called “Timewarping” which pans partial frames and interpolates movement of the image combined with a prediction on how long it takes to receive a new frame. So there is scope for improvement, tuning. HTC Vive uses a similar but less accurate technique, but also reduces the amount of a partially completed frame that needs updating. One is more accurate, the other more efficient. These techniques get better with each iteration.

How well does it work?

DCS World 1.5 and the 2.0 alpha is currently the only flight simulation platform that has native support for the Oculus Rift. The Rift is auto-detected by default and ready to go on launch. FSX and Prepar3D requires third-party tools to add Rift support. We played with the stock helicopters in Microsoft Flight Simulator X/Prepare 3D v3.0 and my personal pet hate, the Ka-50 “Black Shark” from DCS (best described as an abusive relationship). 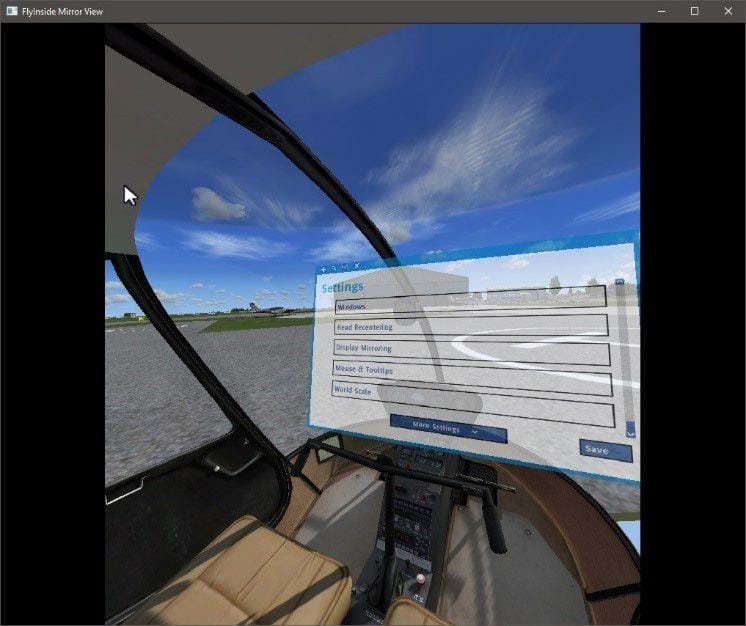 Setting up Prepar3D 3.0 for VR was painless thanks third party software: FlyInside. There are separate versions for FSX and Prepar3D. The asking fee for FlyInside is a bargain for what it unlocks. A free evaluation version is available so you really have nothing to lose.

Launching Prepar3D in VR mode is a matter of launching Prepar3D as you normally would. First time launch requires clicking through alerts to automatic configuration changes that take place after that first installation. The defaults were enough to get going, all the UI of Prepar3D and FSX still run on the native desktop. You put on the headset once a flight has been loaded. But once you do, the world of Flight Simulator will never quite be the same again.

FlyInside features a well thought out interface for modifying multiple settings and performing in-cockpit configuration without having to leave VR space (i.e. take off the headset). Hot keys can be defined to toggle settings panel, 3D mouse, re-center the Rift. This is much needed as tweaking performance and your head center position can be a little fiddly, this allows you to do all of that without having to lift up the headset all the time. Their virtual menu system would be great to use for aircraft checklists. What’s more, there is support for the “Leap Motion” hand tracking device which I’ll be testing in the near future. 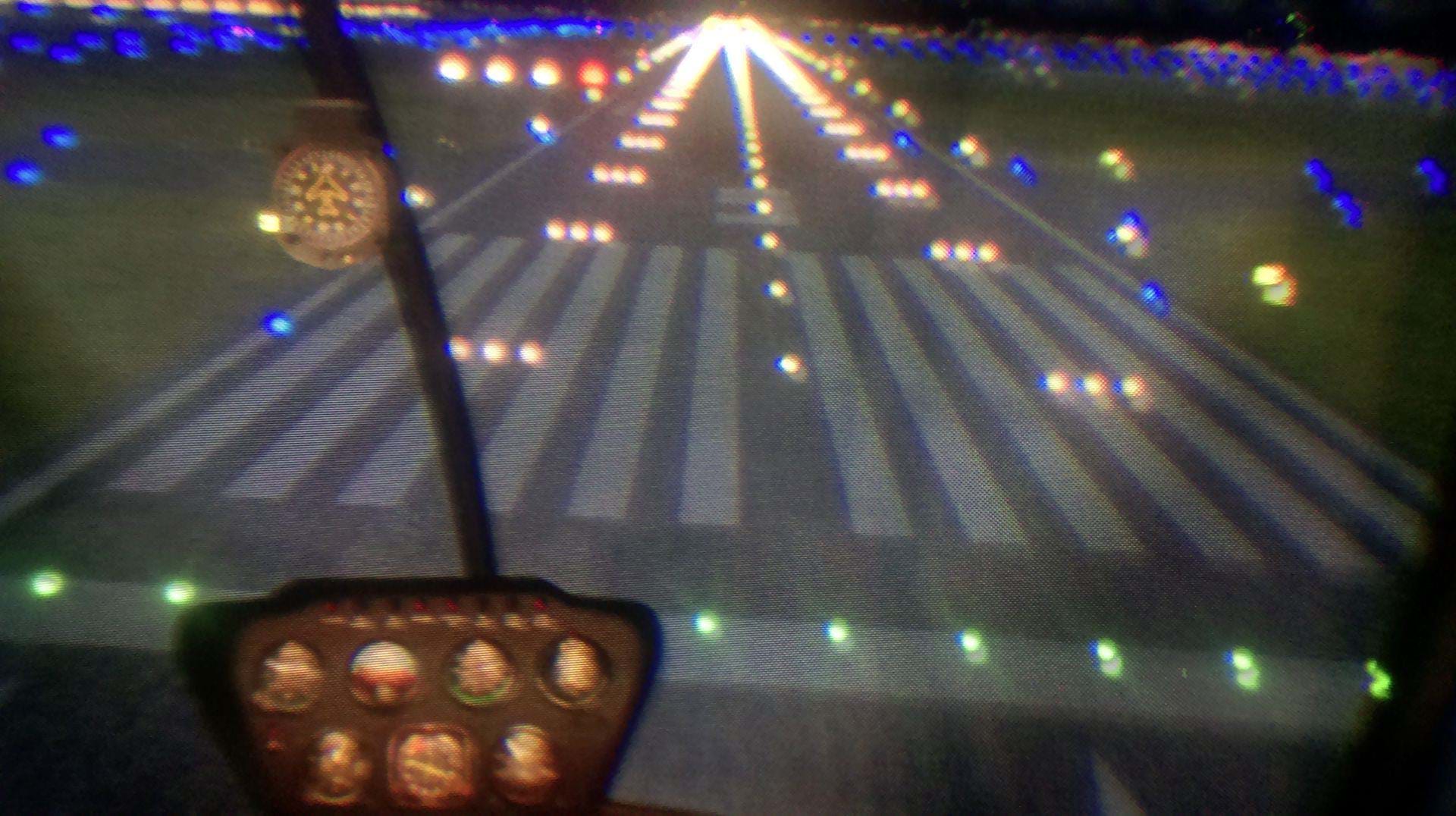 Flying a Robinson R22 with its high visibility bubble canopy is like sitting in a chair at 500 feet. Great visibility, a small instrument panel, not much to obscure the view.  An ideal helicopter to test VR. Once over the initial “wow” moment it I just had to sit in the simulator with the engine running just to take in what I was feeling. I’ve never experienced Flight Simulator like this before. I wasn’t looking at it; I was in it. Unlike TrackIR when your viewpoint is a ratio of head movement, the head tracking of a virtual-reality headset is 1:1. This means a 45-degree turn to the left is 45-degrees in game. You can physically look over your shoulder and see the rear of your cockpit in game. This 1:1 relationship makes flying any aircraft a more natural activity. You are sitting in a chair, sitting in an aircraft, it becomes easy to judge distance to the ground or that next taxi-way. 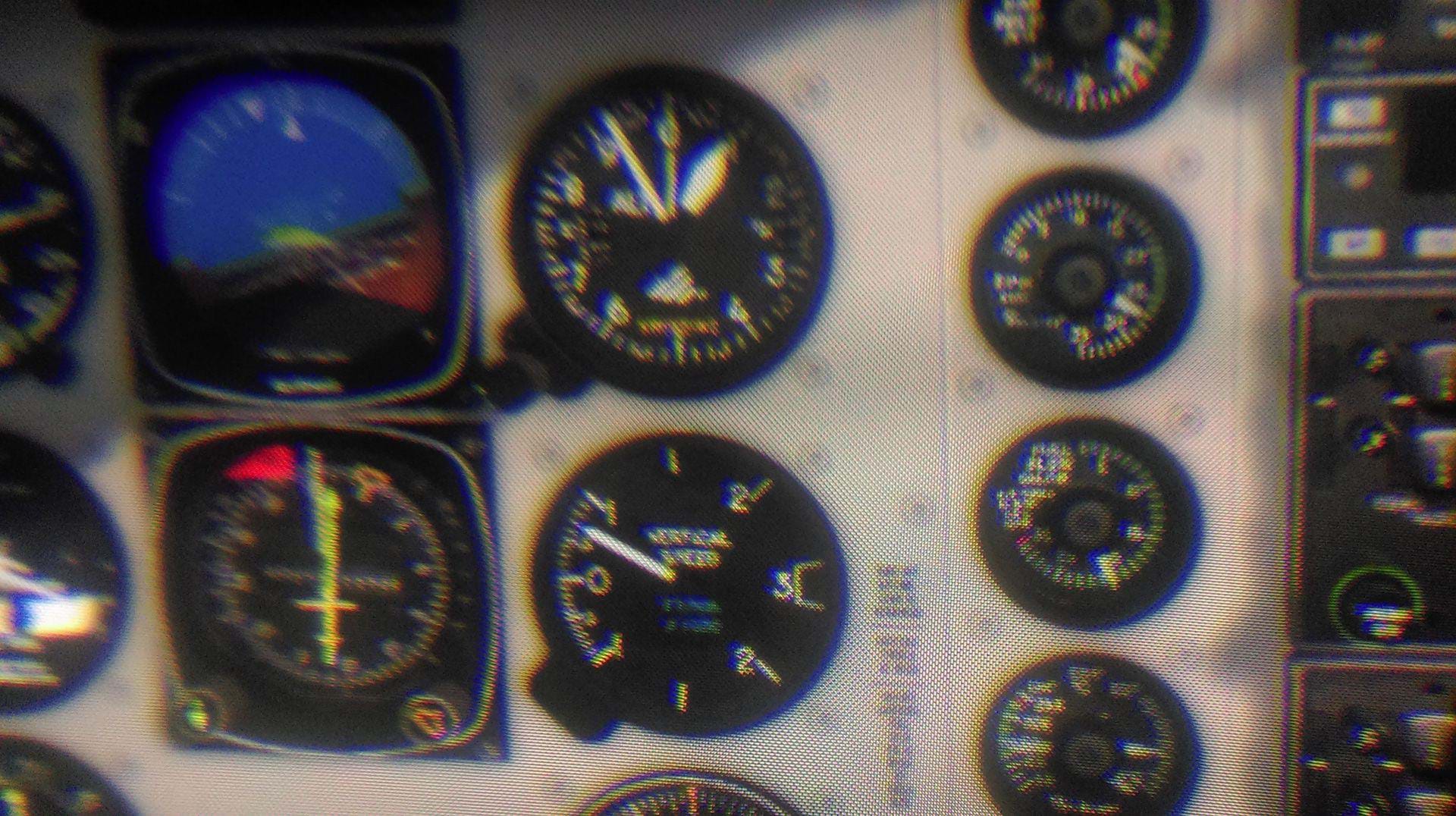 With the R22 engines running it was time to take-off and get a feel for flying. Scanning the gauges something was wrong, my first thought was there was some graphics problem, that the needles had not loaded or some gauge rendering issue. This is where we run into the first problems of this new technology; resolution of the Rift DK2 does not allow reading of the R22s gauges from an upright-seated position. The screen-door effect combined with chromatic aberration makes small details hard to read. As with TrackIR, leaning forward to read gauges is required. Increased awareness of what the helicopter is doing during flight goes a little way to counter this.

Uncommanded side-slips are the worst and this is true of all the sims we’ll be looking at. One bad coordinated turn with horizon at odds with your sense of the aircraft, and this can result in motion sickness. It’s was enough to encourage me to try much harder and think ahead about what I was doing; with practice this will make me a better pilot. But one turn was so bad I had to stop the session, that moment was the closest I come to feeling physically unwell in the Rift and I’ve now had a hundred hours in the goggles.

I flew a few visual circuits around my local airfield (EGNM) impressed by how recognizable the shape of surrounding hills were. When you’re familiar with real world scenery, in the virtual world turning your head to look at landmarks only to have them right where you expect is simply amazing. This is clearly going to be a great tool for familiarization.

Due to the jittery nature of the R22 it was not comfortable to fly for any length of time, which was surprising since I’ve spent days playing Elite Dangerous without any problems whatsoever.

That ends this first foray in the world of VR with Flight Simulator. Next time we’ll be looking at DCS World.

Richard Hawley is a contributing writer, he has been flight simulation enthusiast for 30 years working as a developer and test engineer in the gaming industry. He has contributed to PC game titles such as Enemy Engaged series, Team Alligator, Black Shark and Jane’s Longbow 2. Now in his late 40s, he’s still convinced the best is yet to come, "art is never finished, only abandoned".
More articles by Richard Hawley