It’s been my control set for the past 4 years or so and I have put it to good use on all the sims I’ve been using since I get it. And, if you have been following this website for some time, you probably know I use a lot of different sims and the Puma has been with me all the way through my simming explorations.

If you read Joe Hudson’s review of the previous version, you’ll get a very nice perspective from someone that knows helicopters very well (Joe is a US ARMY Instructor Pilot) and has been around sims for quite some time as well.

The Puma has rapidly won me over as well. 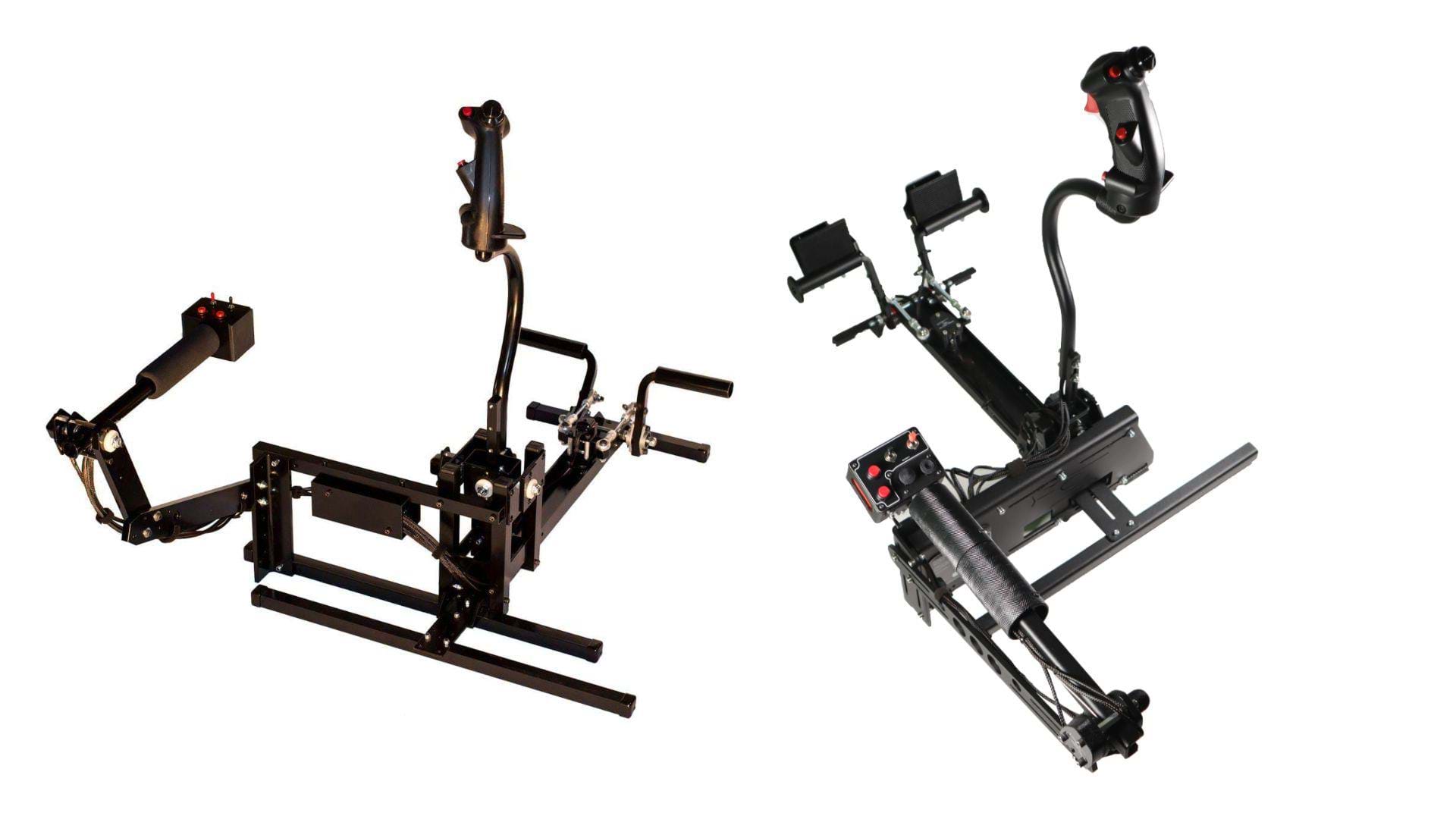 It’s a (somewhat) compact system that I can move around quite easily, put it to the side and let it sleep under my desk – where I do all my work and write these articles (in fact the Puma X is now stowed next to my legs right now) and it always treated me well, even for the (extremely) rare times where I tried a... let’s call it, non-rotary-aircraft.

I’ve been more than happy with it. And now, I have the new version, the Pro Flight Trainer Puma X, which I have been using for the past couple of months or so.

Before we move on, I just want to let you know what this article is all about – and what is not.

This is not a deep review of the Puma X. I am not going to do any ratings or anything like that. What I am going to do, though, is talk about the Puma X as someone that comes from the previous versions.

I am going to tell you about the differences, what I think of them and if I find them an improvement over the previous model.

I also have to say that I was involved in the development of the Puma X as I got a prototype which I used to evaluate and provide my feedback to Pro Flight Trainer, which implemented some of my ideas (or complaints) and suggestions. At least the ones that made sense. There’s a chance some of those ideas will eventually be added in the future. But I digress.

All right, then. Now that we are (hopefully) clear about what this article is about. Let’s dive right in. 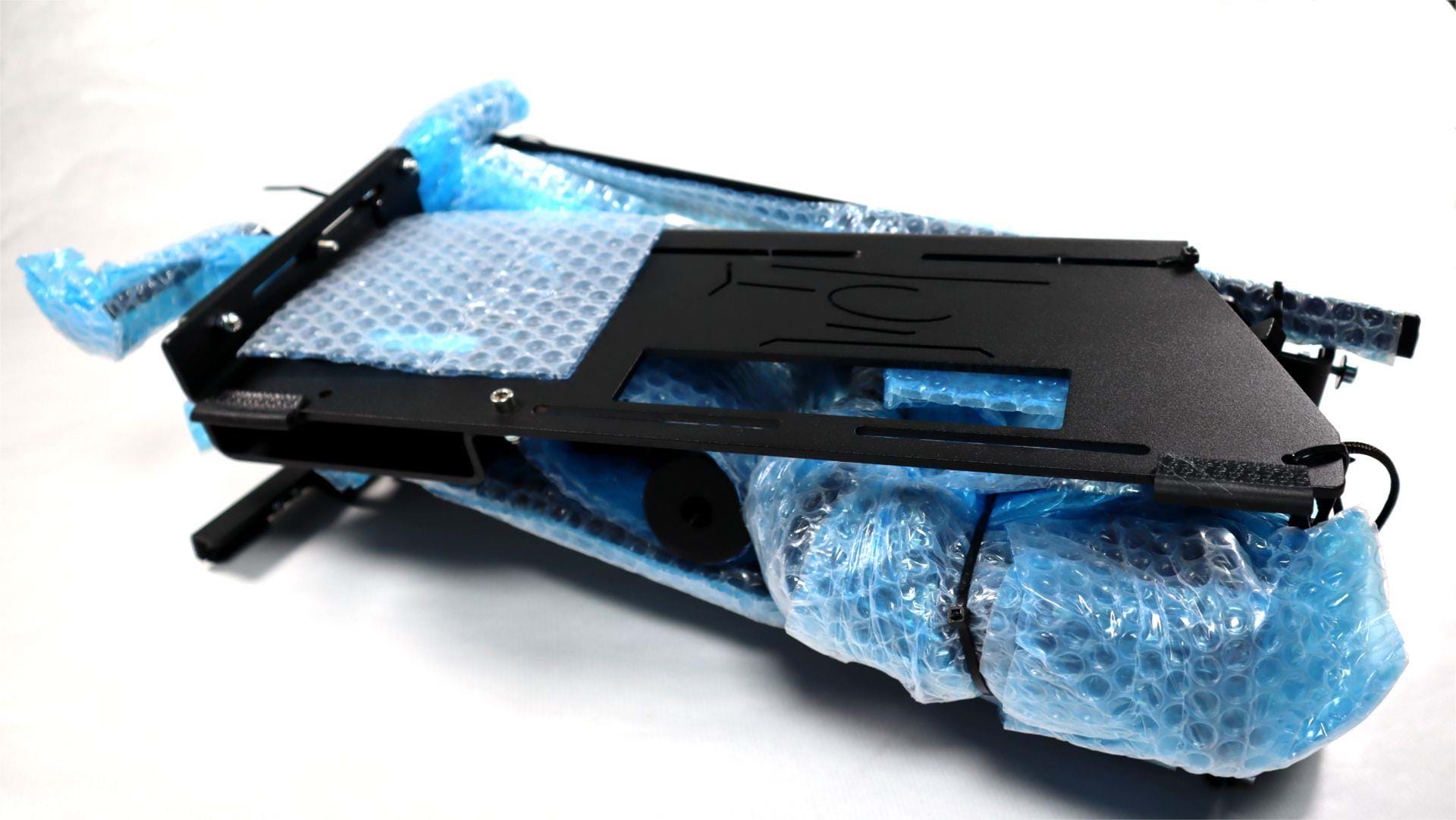 All right, this is not exactly “a difference” from the previous version but I thought it would be funny to show you. This… Brick is what was inside the box and that would eventually turn into the Puma X.

A lot. The Pro Flight Trainer Puma X is not just your regular update over a previous product. It’s way more than picking up the chassis of the v4 Puma, changing a bit here and there, polishing some stuff and off you go.

This is a very different Puma in many ways. I think the only things that weren’t completely redesigned were the pedal system, cyclic system, and cyclic tube. And even those were touched somehow.

The Puma X is a completely new and redesigned Puma.

Pro Flight Trainer decided to switch the electronics on this version so that they had more options but also so that they could adjust to the use of new hardware. 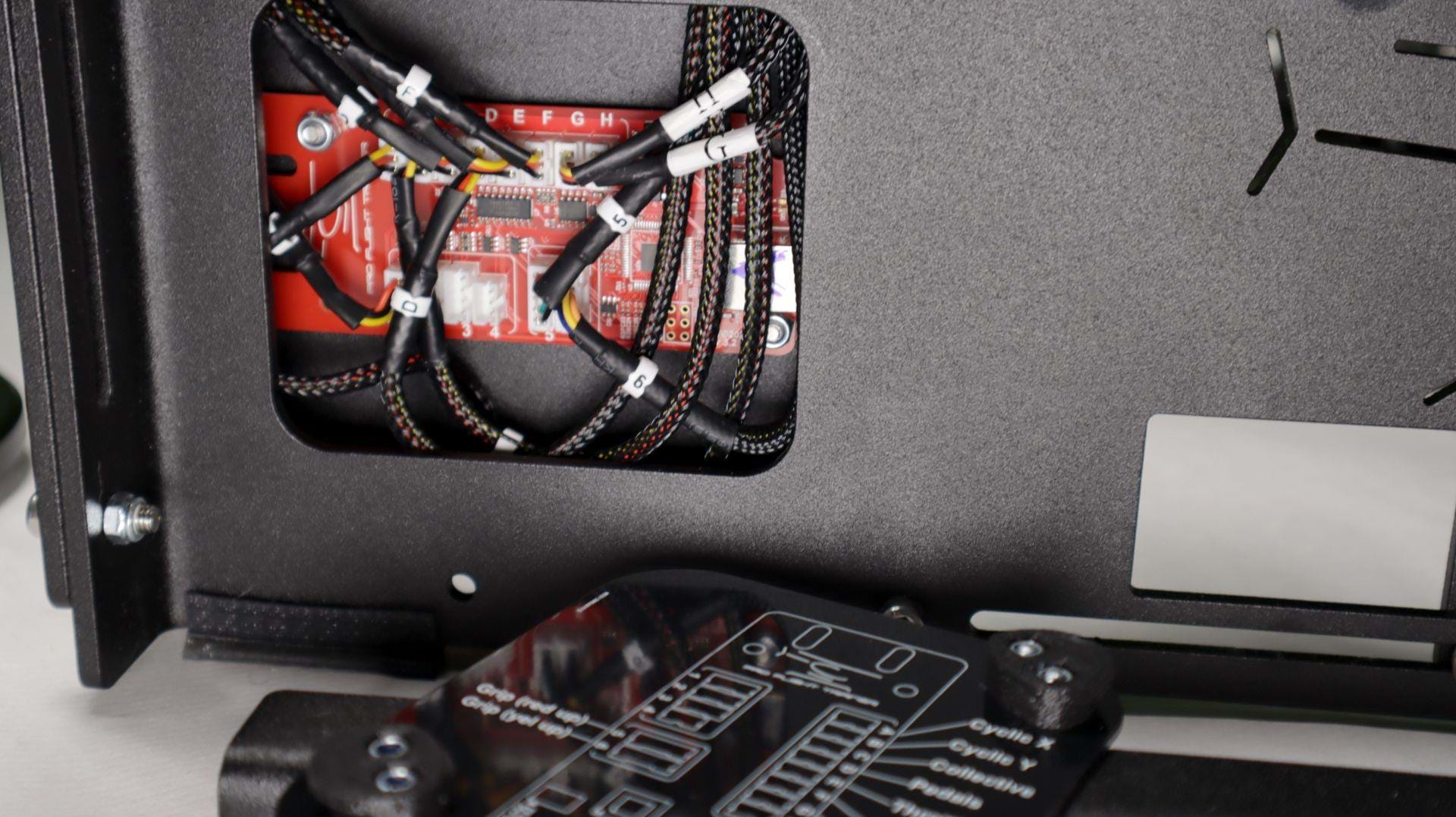 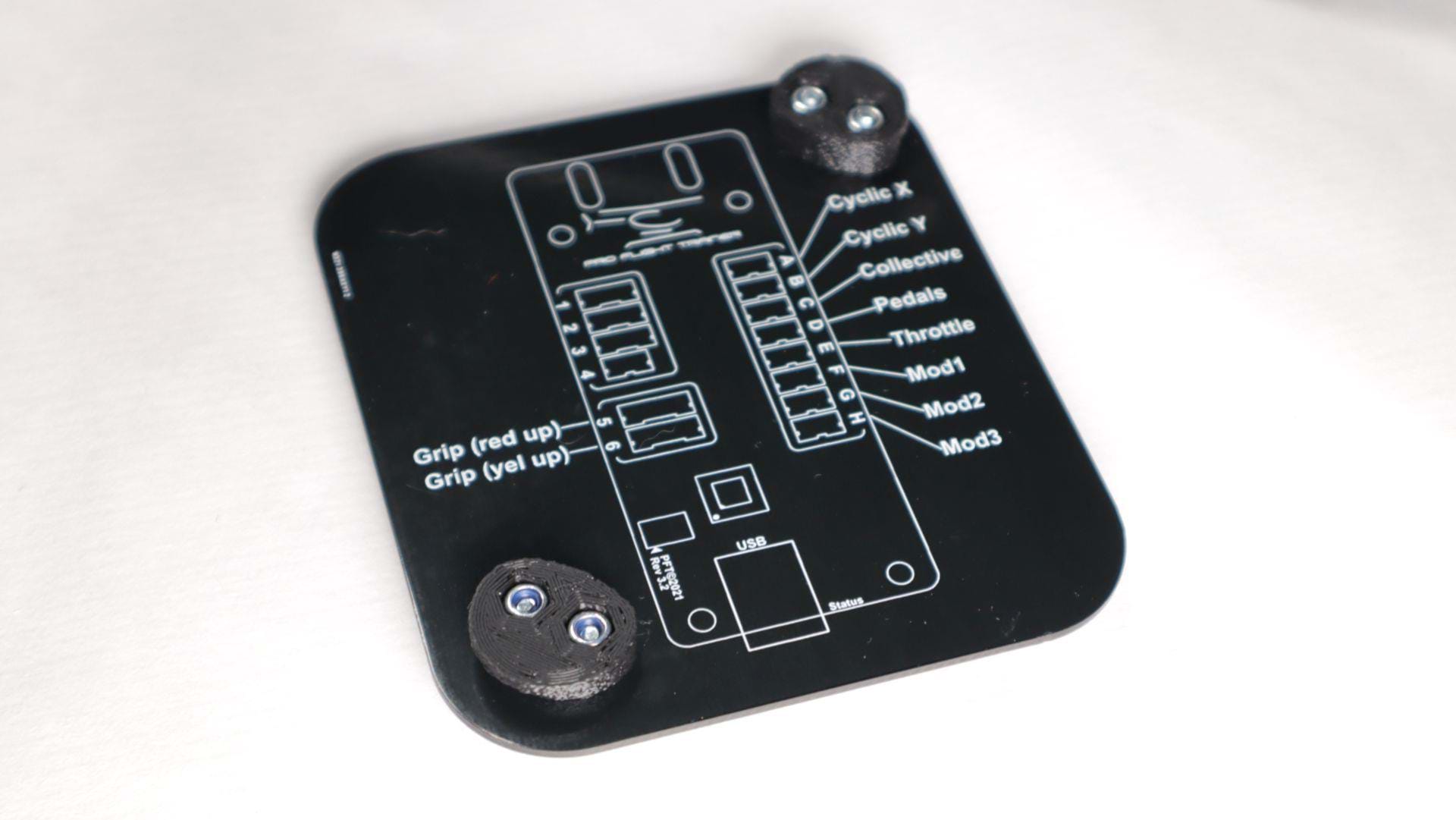 Above: on the left you can see the PFT Puma X board with all the cables connected. On the right, the inside of the cover where the board is located, with the schematics of what goes where. Nice touch and very helpful.

One of the hardware changes (electronics-wise) was the migration from regular potentiometers to Hall Effect Sensors (or just plain Hall Sensors).

Of all the changes on the Puma (and, as I said earlier, the whole kit was redesigned) this is the one that I wasn’t expecting to be much of a difference but that became my favorite change.

I can’t really explain this but the difference I felt between the old Puma and the Puma X was huge. The new Puma X seems to be a lot more precise and smoother. I didn’t feel a huge difference in the mechanical side, but the response of the electronics feels a lot better. That completely caught me by surprise.

Yes, I know hall sensors are better than potentiometers. Everyone says that, because, well, they are. But I have used different hardware that uses a different technology and I have never really noticed a huge difference.

Nonetheless, replace the kit you’ve been using for 4 years with something similar but new electronics and you do feel it. A lot. What an amazing difference it makes.

More controls on the collective 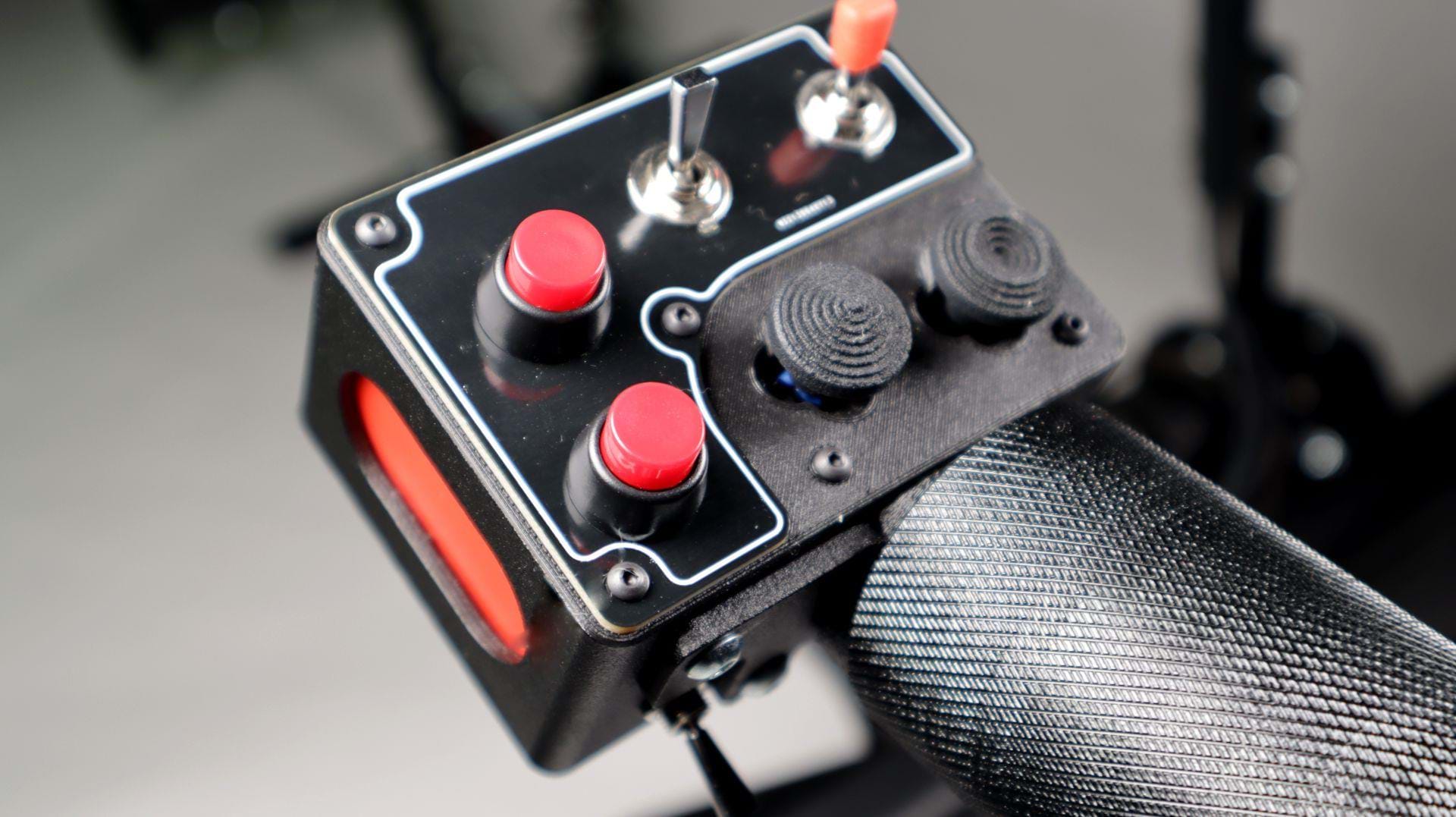 Another great and welcome change is the addition of more controls on the collective. Version 4 of the puma came with 1 x switch, 1 x 3-position switch (or shift-switch if you want to call it that – more on that later), and 2 x buttons.

The collective head on the Puma X comes with

Oh yeah, the 3-way switch? The 2 buttons on the collective and the 4 buttons of the cyclic can act as 3 buttons each.

Let me explain. Imagine you have 3 circuits and that you have a switch that toggles between circuits. That’s the 3-way switch. But, connected to those circuits, you have buttons. They are all the same buttons, but they act differently on those circuits.

So, for example, the trigger on the cyclic will be button X, but once you toggle to circuit 2, it will be button Y. If you turn circuit 3 instead, it becomes button Z. And this happens to all the beforementioned 6 buttons.

Above: the 3-way switch

The previous version of the puma allowed us to switch between 2 circuits for a total of 12 buttons + a 2-way switch and the 4-way hat. That’s a total of 18 assignments. The Puma X brings an extra 18 possible assignments. Double the amount of the gen 4 Puma. Quite the increase and very handy, especially in VR!

Another of the changes in the new version is the increased ergonomics and customization. It’s much simpler to position the collective. The pieces that compose the arm have slots instead of just round holes, which means we can slide it into a place that is more comfortable for us.

As with the previous version (although it was not available from the start), the cyclic can be fully folded forward to be stored. Handy. 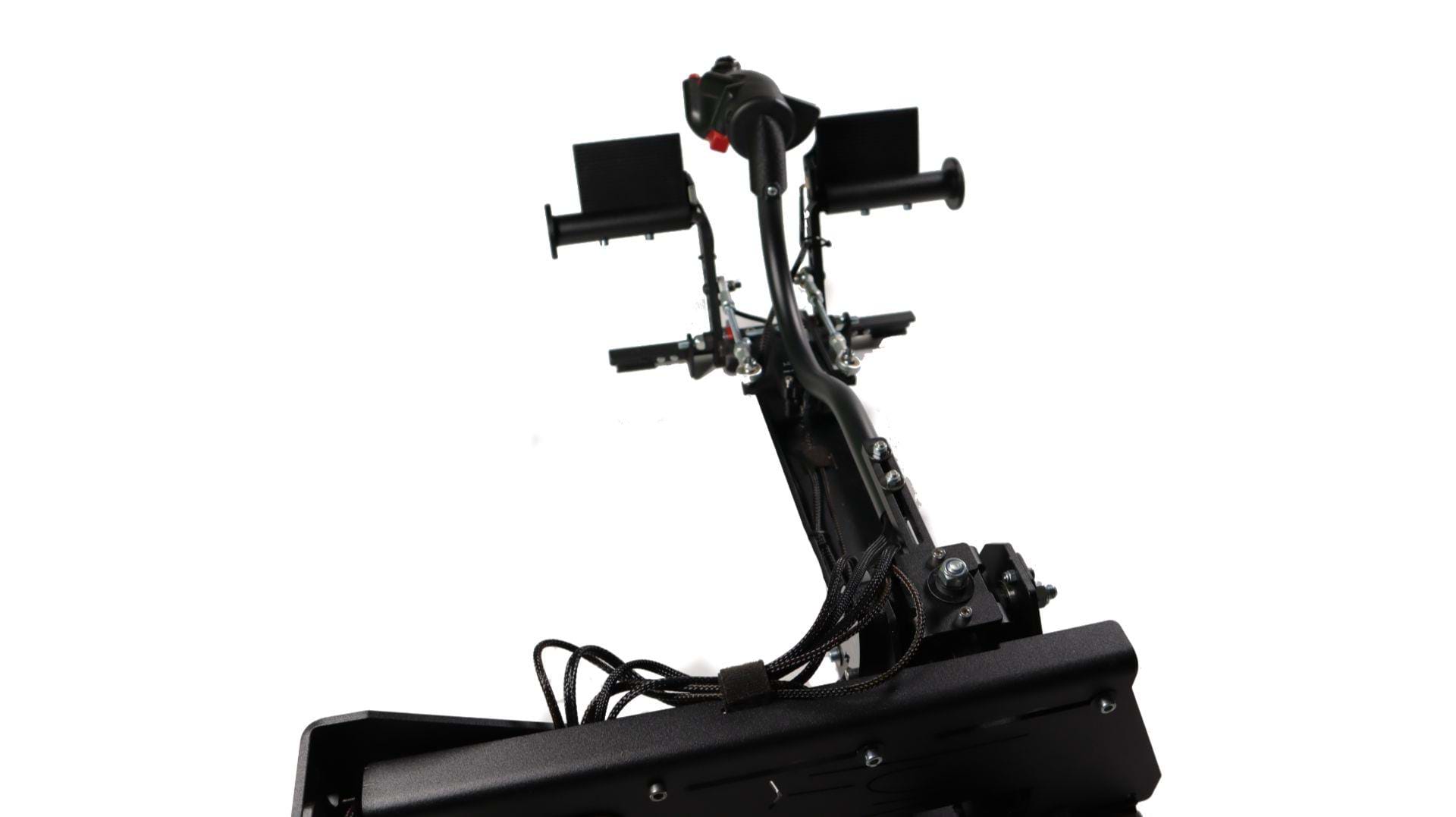 Another welcome change is the fact that we can now place the chair stopper (the part that we can use to prevent the kit from moving) at different distances and we can move the cyclic base as well. This is a great change, but I do have 1 complaint/suggestion: I would love to have a quick release system and the ability to get the pedals even closer to the cyclic. But if it was easy to use a chair before – even an office chair with wheels – that is even easier now. 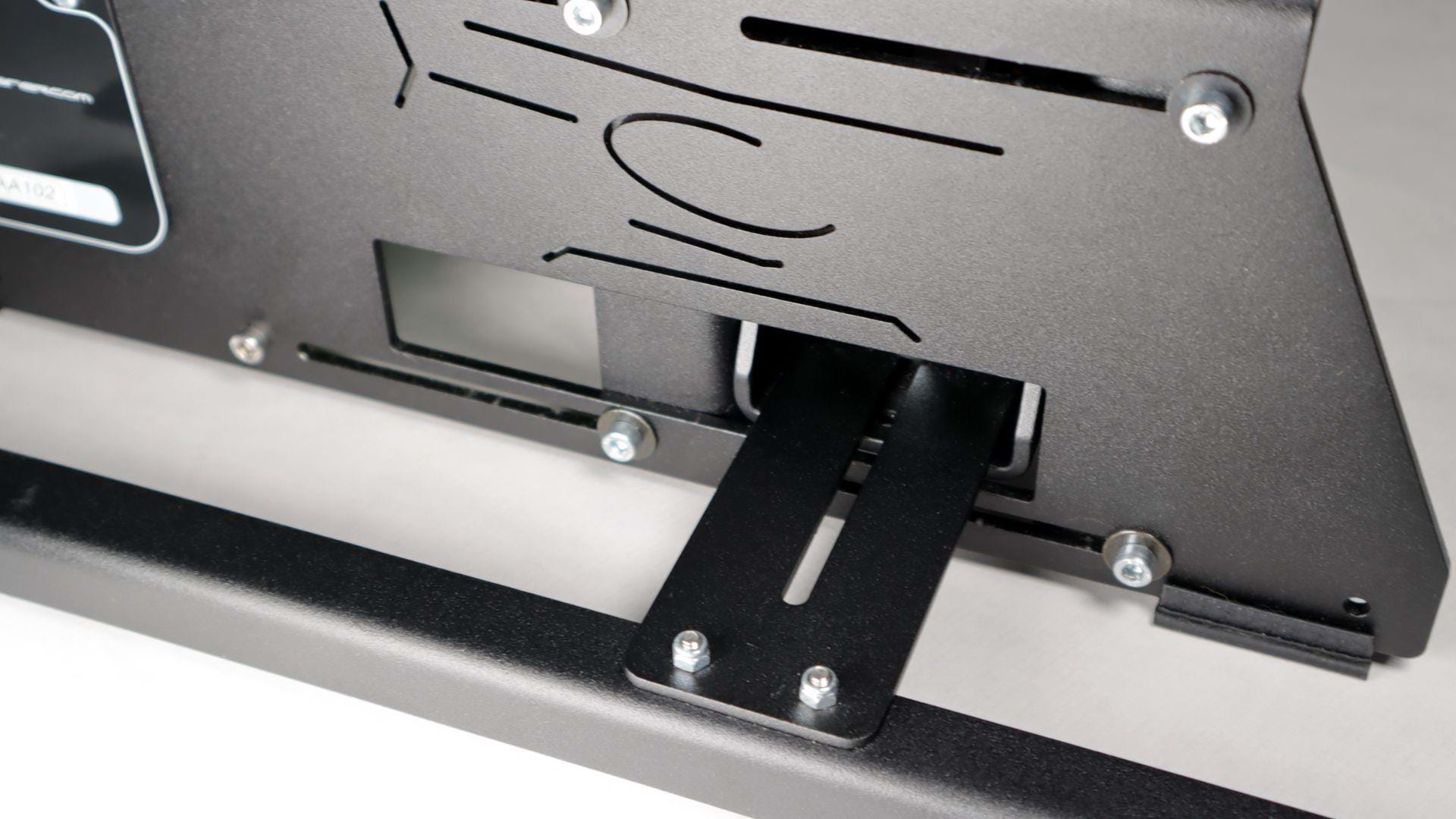 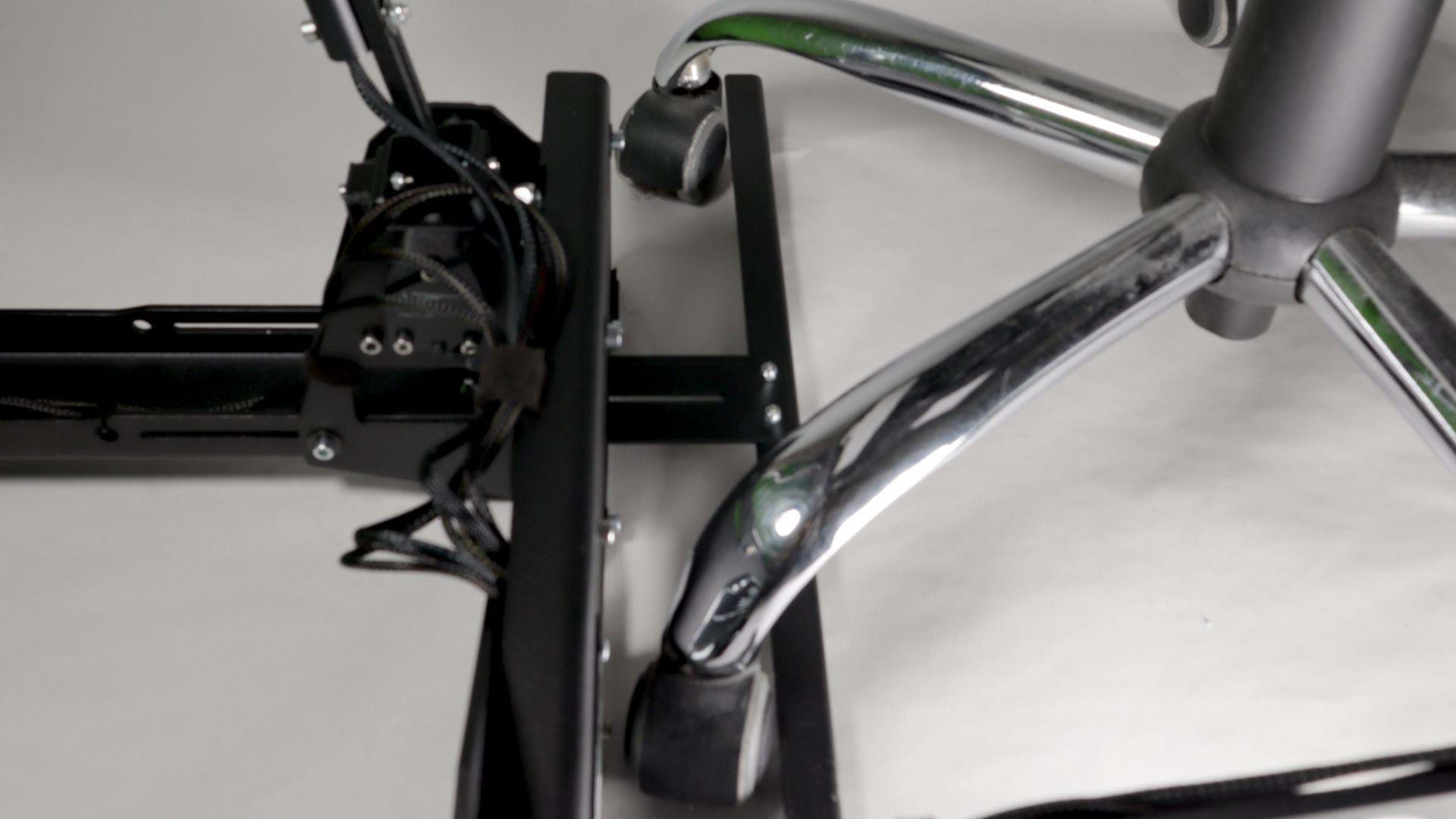 Above: on the left, the chair stop, which can be placed at different distances.

I know this is a very particular need I have but I sometimes bring the kit to events where kids want to try flying helicopters. Kids being kids, some of them may be short, of course, and very often, the poor little fellas can’t reach the pedals. It’s usually not a big deal as I cheat a bit here and change settings and/or get them into a helicopter without that much torque (or no torque at all) but still… It would be cool if they felt like “real pilots” and could place the feet on the pedals and try it!

This is obviously, a very, very particular need.

When you buy the Puma X, you will have the ability to choose between a couple of options: you can add the toe brake model (TBM), which you had to buy separately in the past (you can still buy it separately, of course, but now you can add it as an option to your kit). 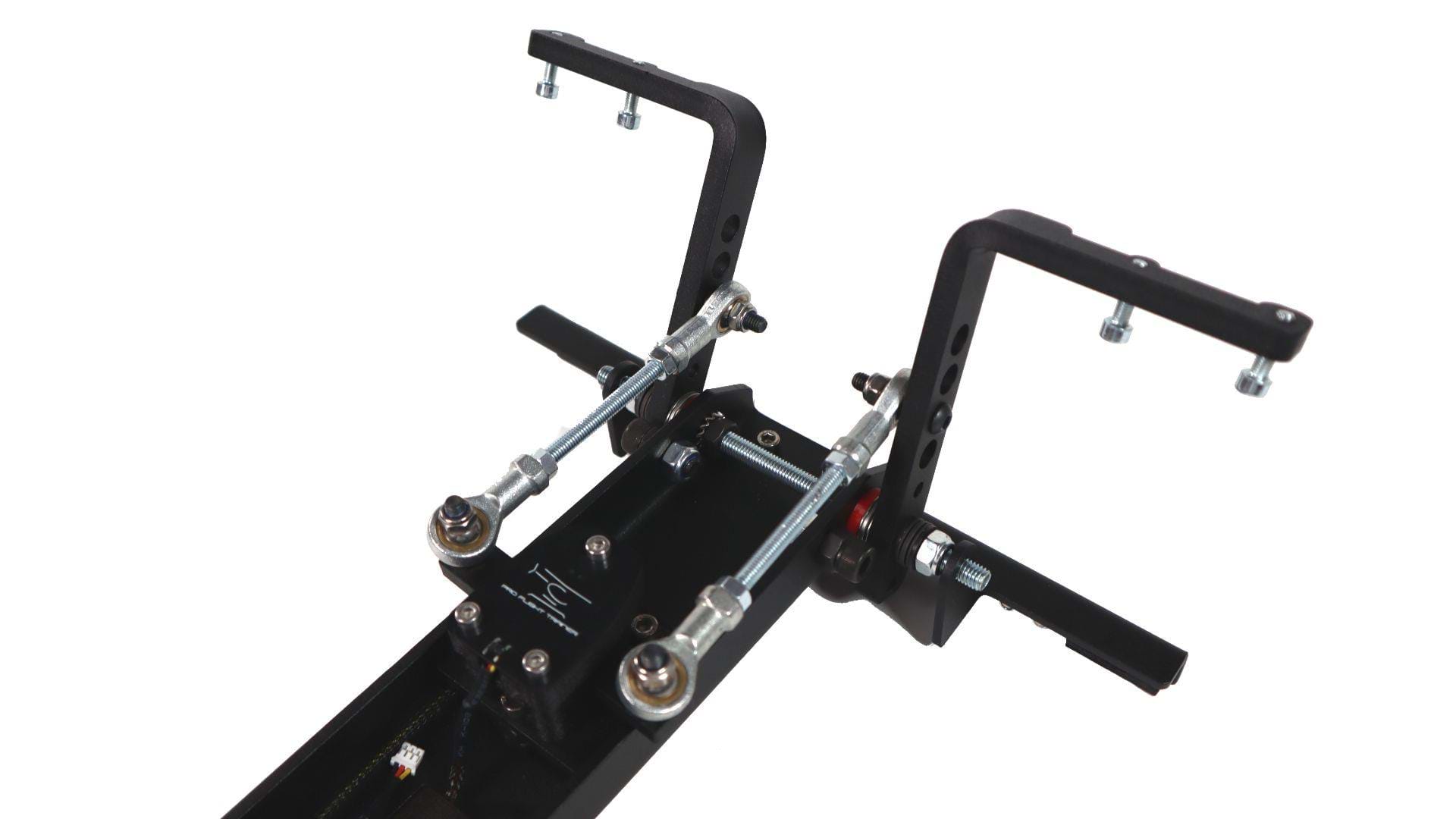 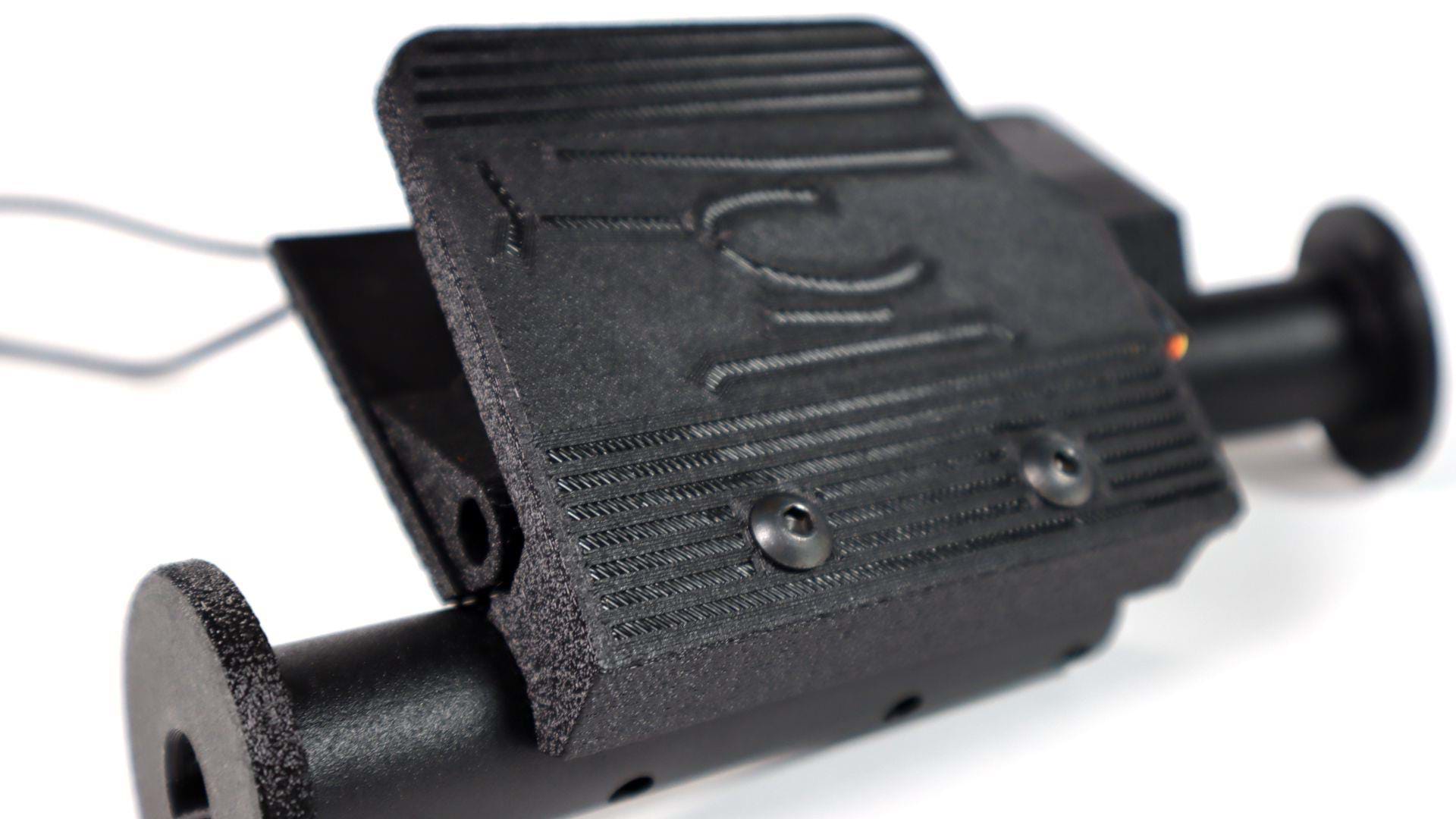 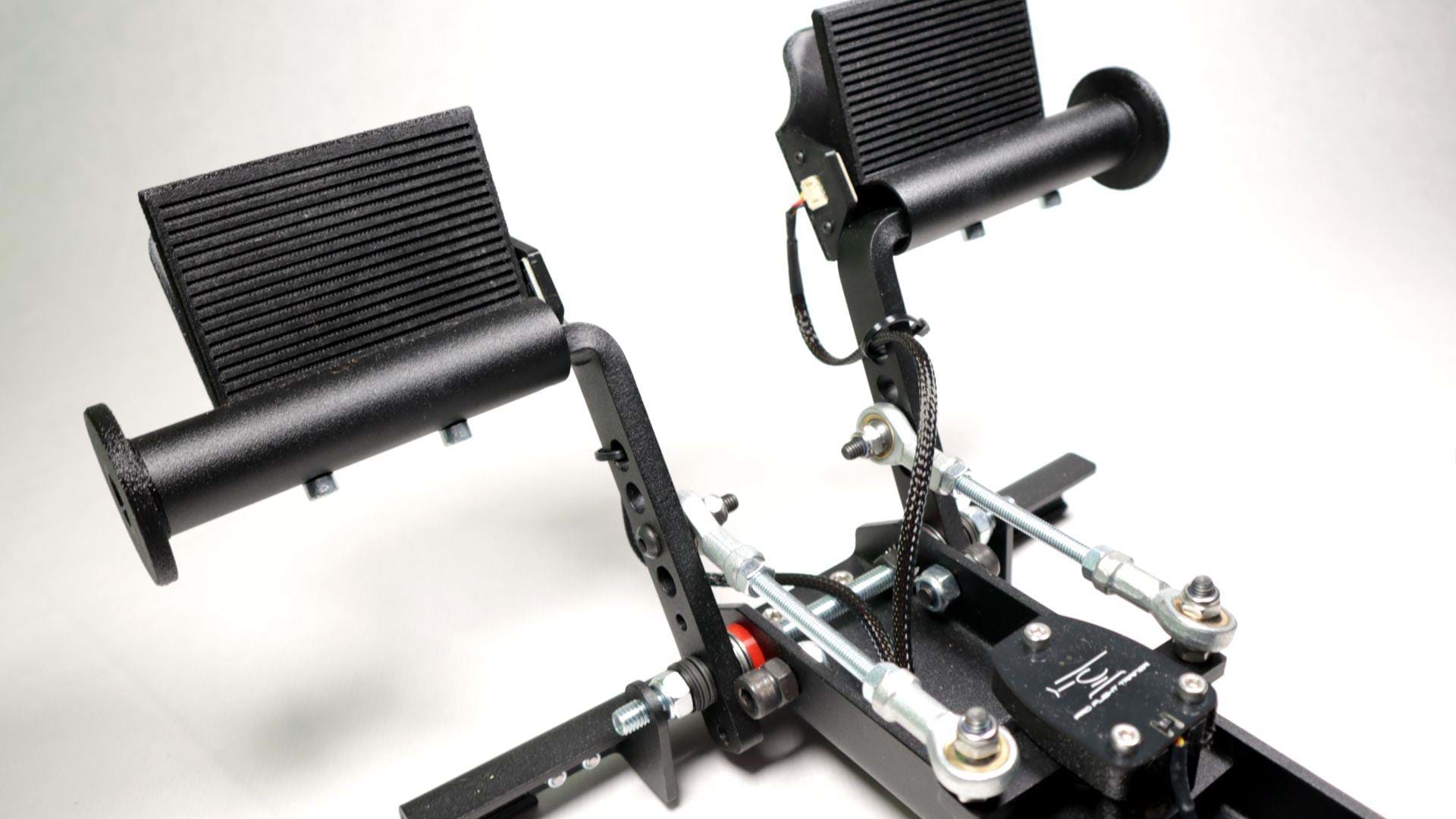 Above: on the left, the pedal structure, before the pedals are assembled. Middle: the toe-brake modification pedals. Right: the pedals, fully assembled.

The other option is the dual-throttle collective, which a lot of owners of the Puma (or people that have been looking at the Puma but decided on other products because there wasn’t a dual-throttle version) have been asking for. It’s a great new feature and I love it! I can finally do the startups on the X-Trident Bell 412 the right way!

Oh, and there’s another cool change: the throttle handles are no longer made of foam but rather metal. Very nice, indeed!

Pro Flight Trainer has been paying attention to the community and they are aware of modifications some people have been making, especially on the collective and pedals. The most popular one is the addition of hydraulic dampers.

The company decided to add some extra holes to the chassis so you can add those modifications easier, but they also talked about the eventual (not confirmed, so take it with a huge pinch of salt) possibility of having some of those kits made available by themselves. That would be fantastic.

I loved version 4 of the Pro Flight Trainer Puma and I love the Puma X. The performance is fantastic and a very nice improvement. The new ergonomic and customization features are something I was looking forward to.

There’s just a slight detail that I don’t see as a flaw but I would consider reviewing in the future: because the arm that keeps the collective in position is so long (something I asked PFT to extend when I got the prototype as it was a bit too short for me), you may feel it move a bit sideways if you put a lot of pressure on it. It’s not noticeable on regular operations, though, but I don’t think reinforcing it would be a bad idea.

But wait! Can I upgrade my previous Puma?

Are you excited about some of these features, but you don’t want to buy a new version and, instead, update your v4 Puma? Pro Flight Trainer already mentioned that a subset of the previous generation will be upgradeable . We should hear more about it soon.