Transitional flight: from FSX to DCS

For the second installment of this series, I gave DCS a try through the Mi-8MTV2 Magnificent Eight module. DCS is well known in the community for being a realistic simulator and the dedicated modules take that a step further. But DCS is, in fact, a whole new beast. In a good way.

DCS is the child of Eagle Dynamics which are the creators of other great combat flight simulators such as SU-27 Flanker (1995) and Lock-On: Modern Air Combat (2003) as well as other variations of Lock On that, finally culminated with DCS – which, by the way, stands for Digital Combat Simulator.

DCS is basically a framework on top of which other modules, such as the Mi-8 one I tried (developed by Belsimtek, which are also the ones behind the UH-1H, MiG-15bis and F-86F), may be built upon. Over 20 modules are available nowadays, ranging from WWII aircraft like the P-51 and the Bf-109, Korean-war aircraft like the MiG-15 and F-86, Vietnam (MiG-21) and modern aircraft like the F-15 and the A-10.

Unfortunately, only 3 helicopters are available: the Mi-8, the Ka-50 and the venerable UH-1 Huey. 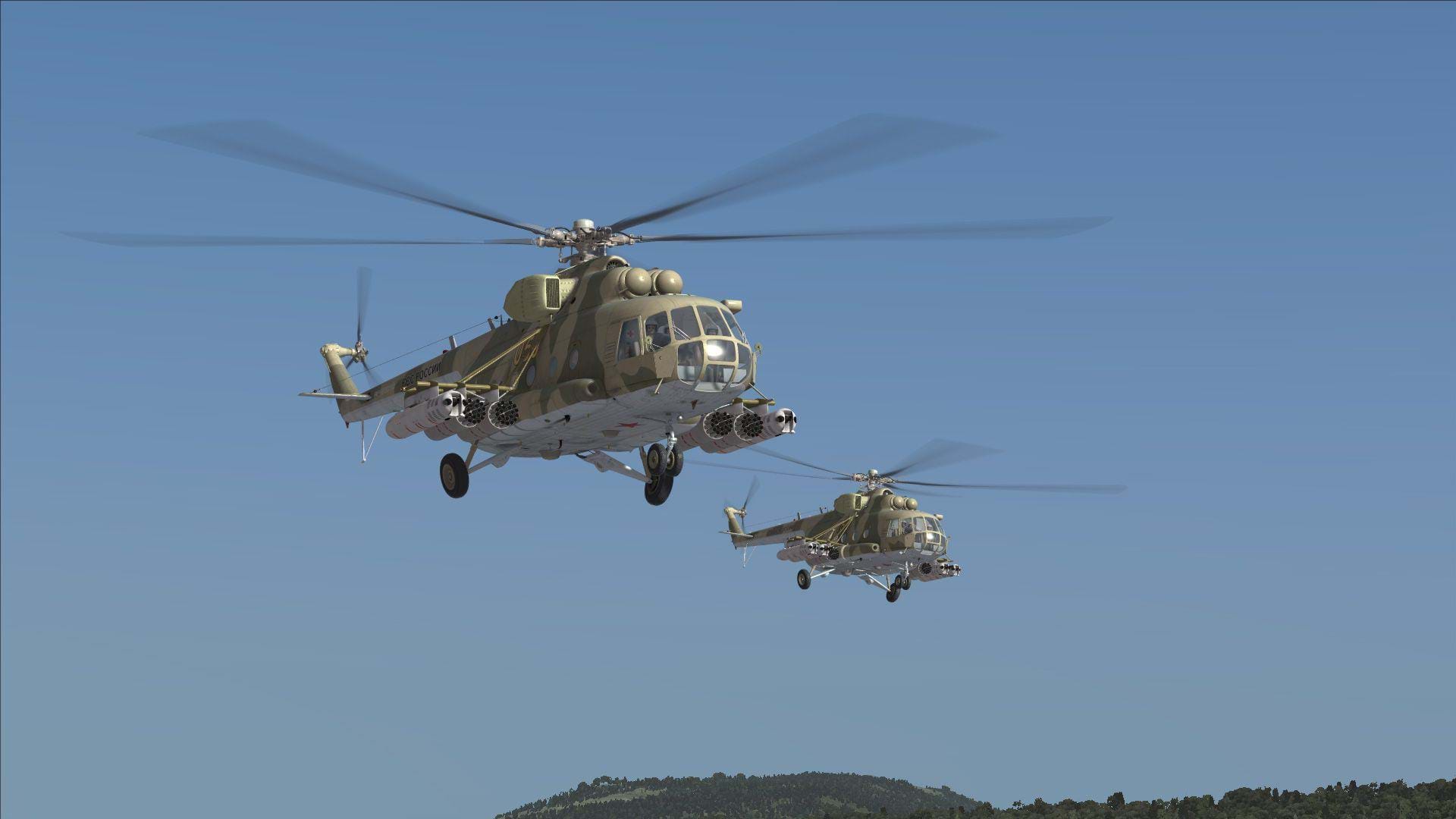 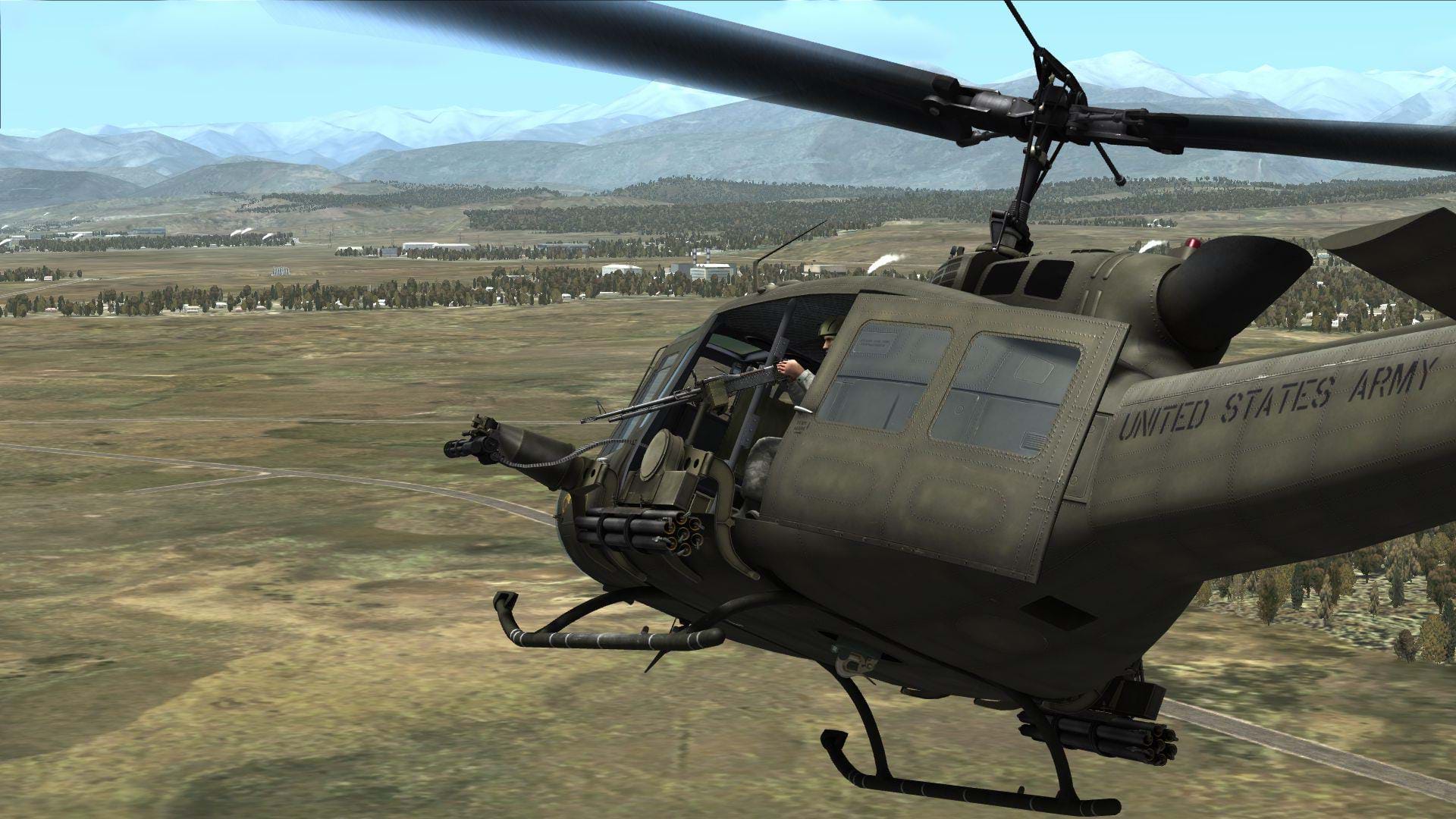 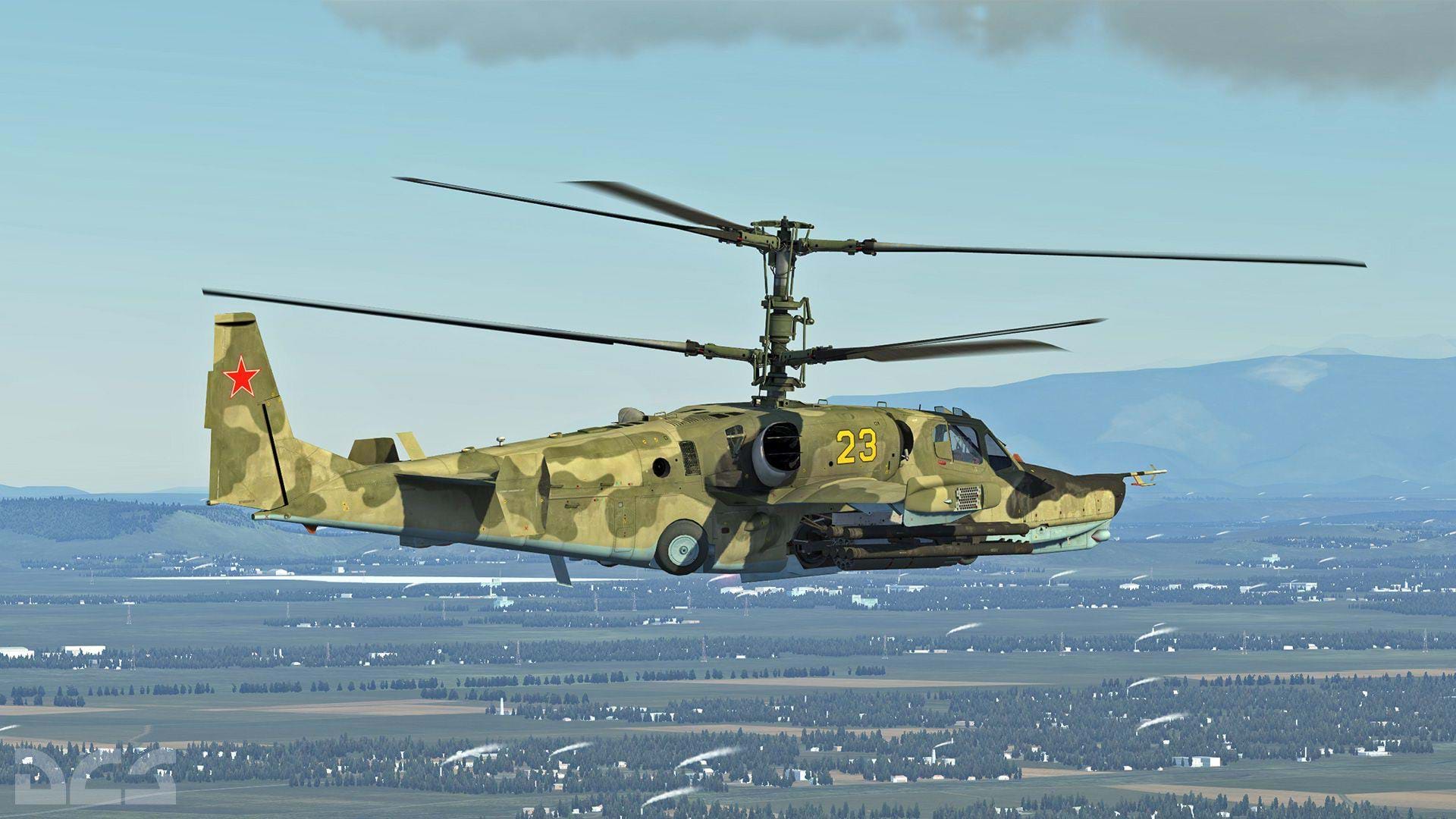 Bear in mind though: this is a military simulator, not your regular flight simulator and it does have its shortcomings. Especially concerning the amount of aircraft available and the area in which you can fly.

How to get DCS

Fun fact: you can actually get DCS for free. DCS World, that is, which is the base of everything concerning DCS. Just head out to the downloads page, download it and install it. You can even grab the open alpha for their 2.0 version. Just remember that it IS an alpha version, not even a beta. So things will be broken and your experience might not be that good. 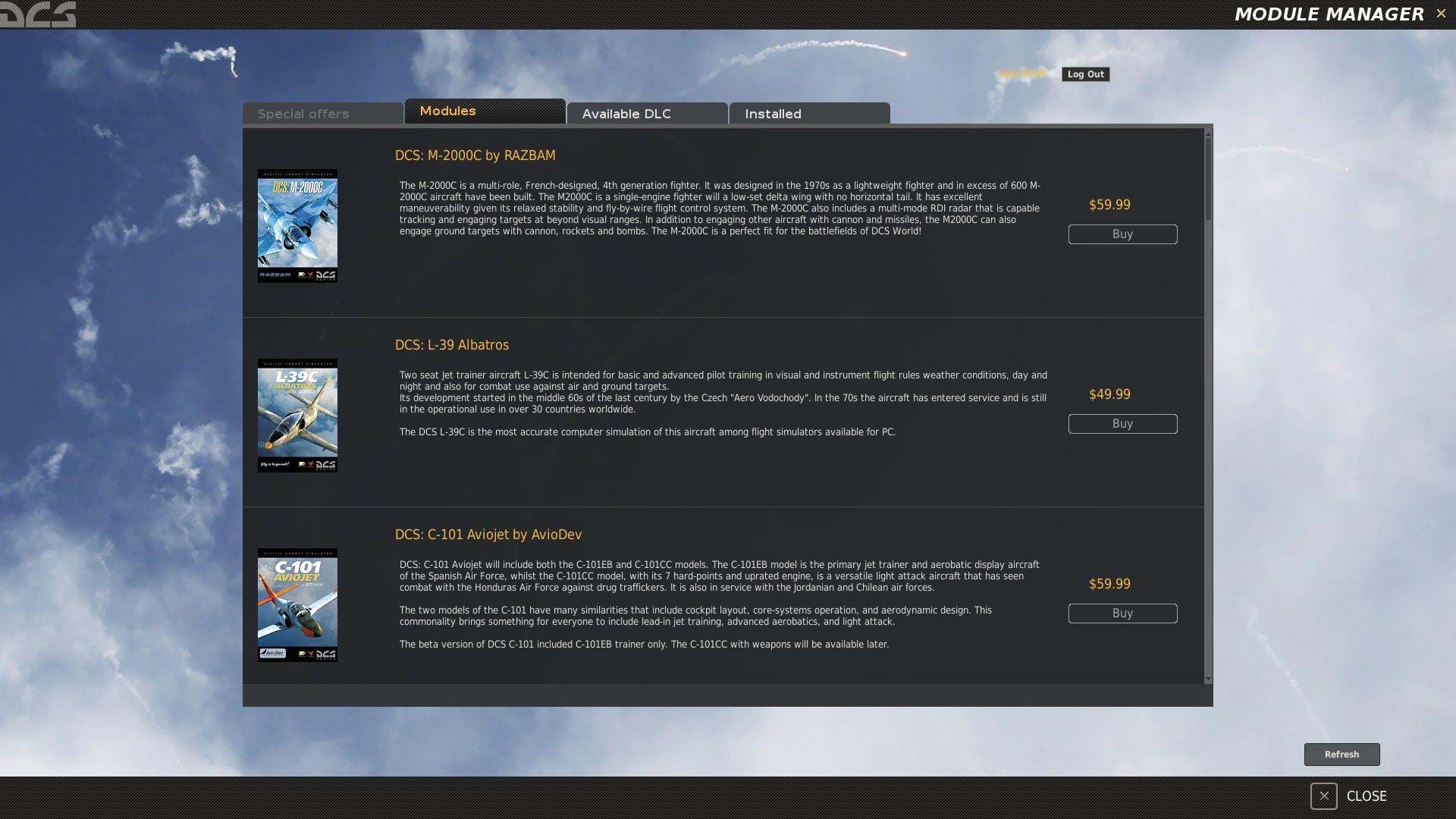 You’ll have to excuse my lack of installation screenshots. In all honesty, I’m not exactly new to DCS and I have the A-10C module which kinda prepared me to what I had ahead. Kinda.

Installation is pretty straightforward though. Open the installer, select a folder and things go from there.

Modules can be acquired at the DCS website [http://www.digitalcombatsimulator.com/en/products/] and then installed and activated from within the game itself. Or you can select a module inside the game to purchase but you’ll always be redirected to the website.

I wasn’t a stranger to DCS but I haven’t actually played it for a long time. When I booted it, it started downloading an update. DCS does that quite often, it seems, which is good. The folks are listening to feedback and fixing whatever needs to be fixed and improving what needs to be improved. I can say the main menu is now a lot more fluid than it was before. At least for me.

The interface looks sharp and you can change the wallpaper and the music track by setting another module as wallpaper. You can see the ones I have available. 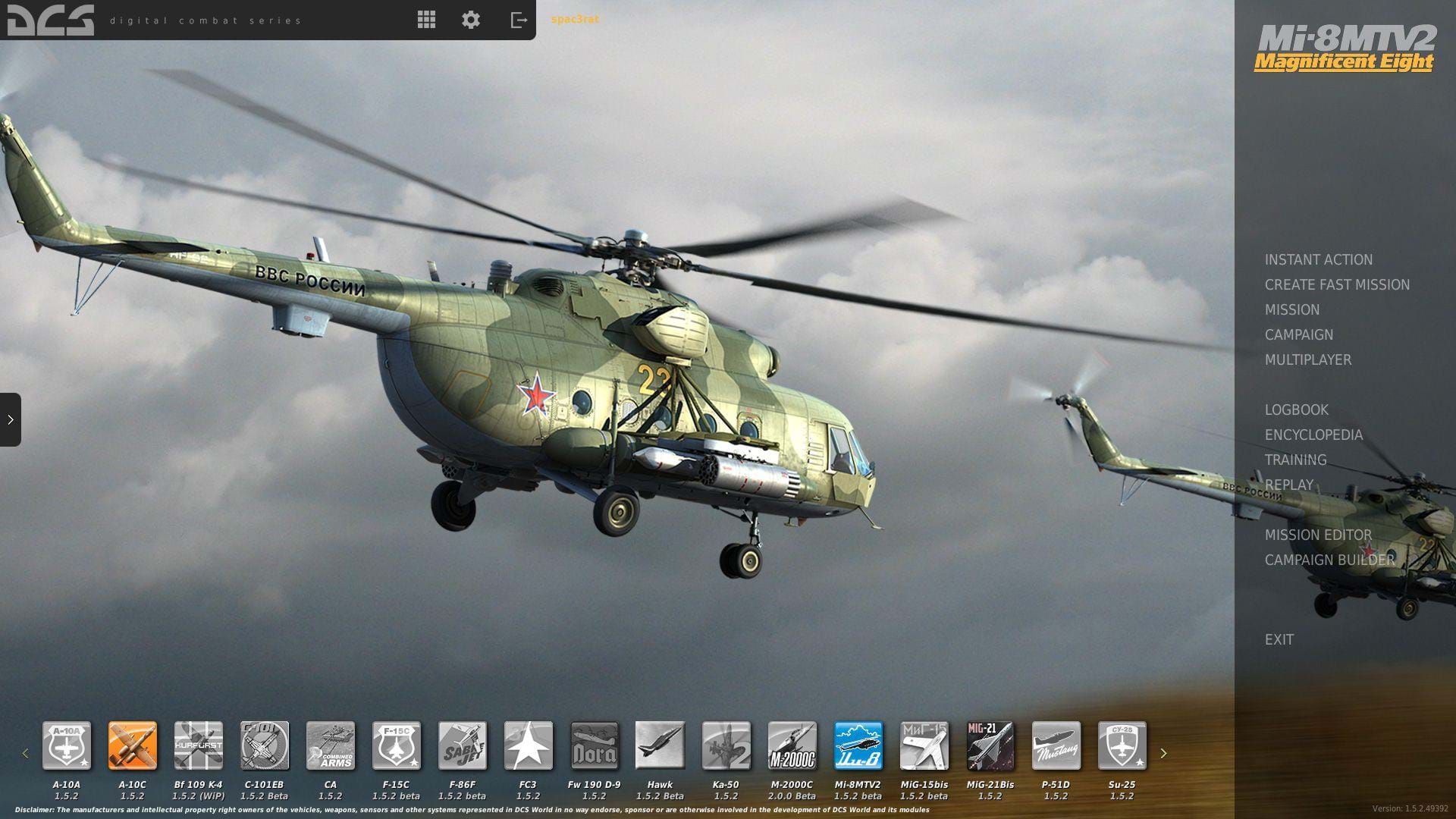 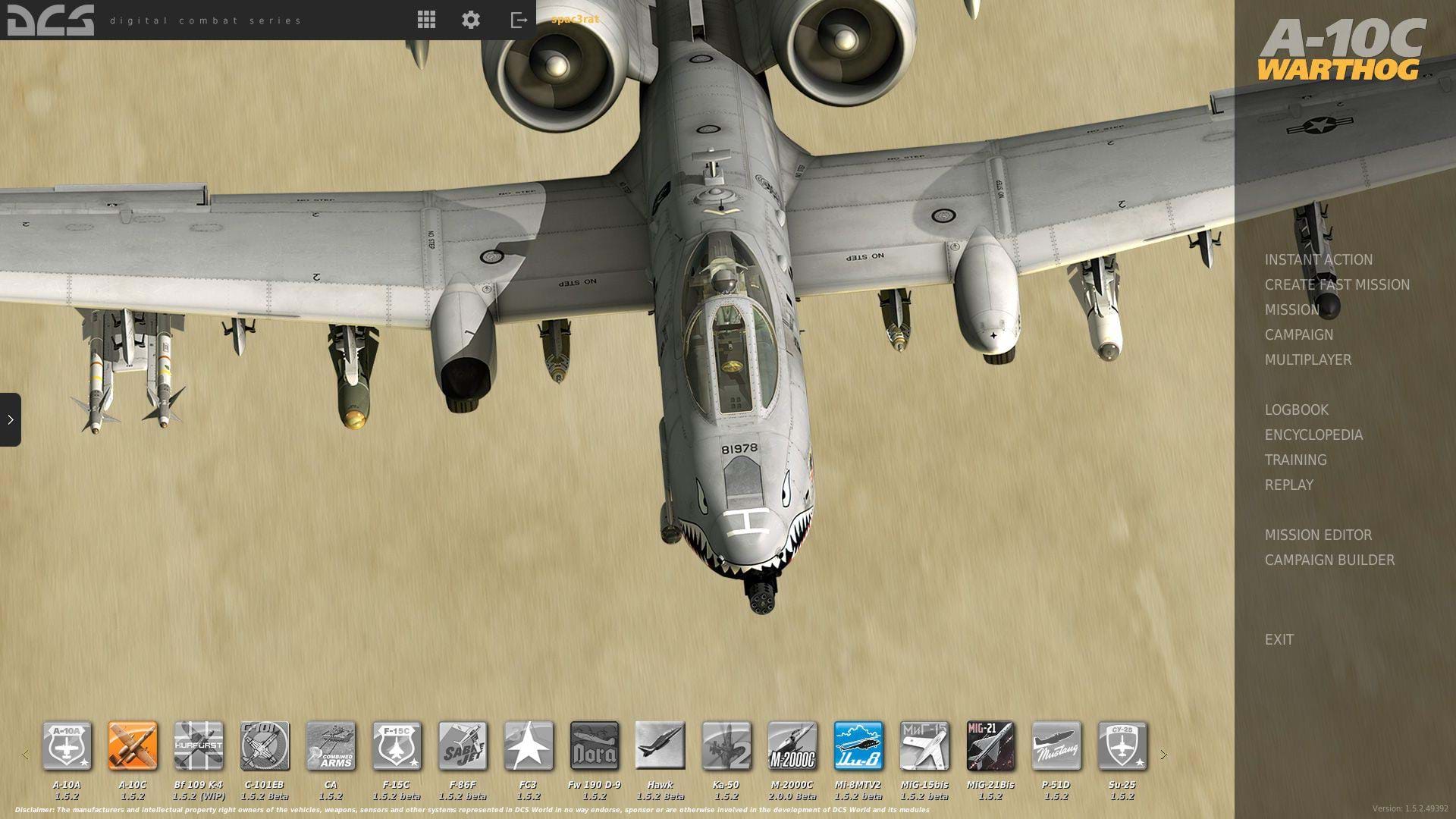 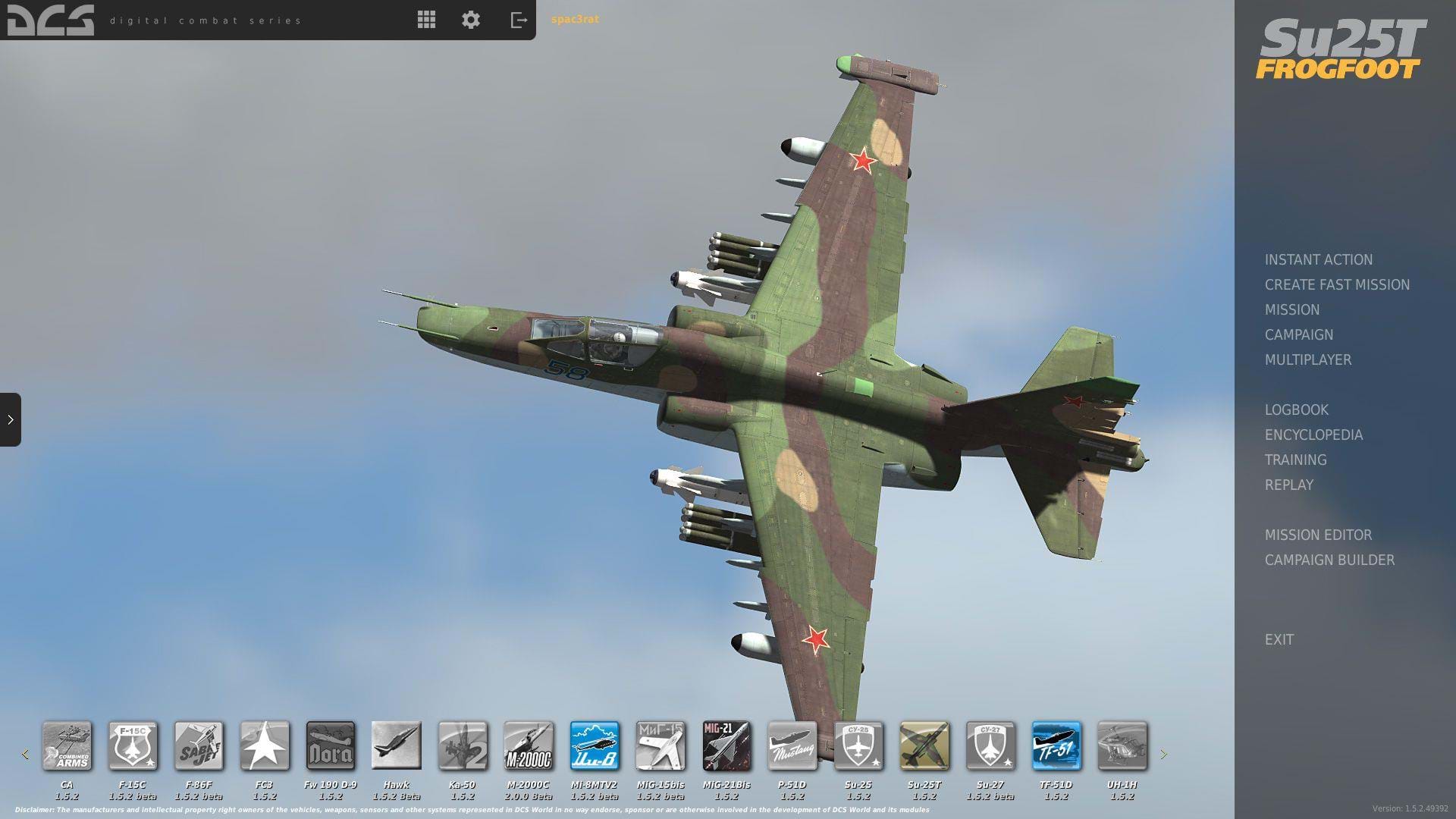 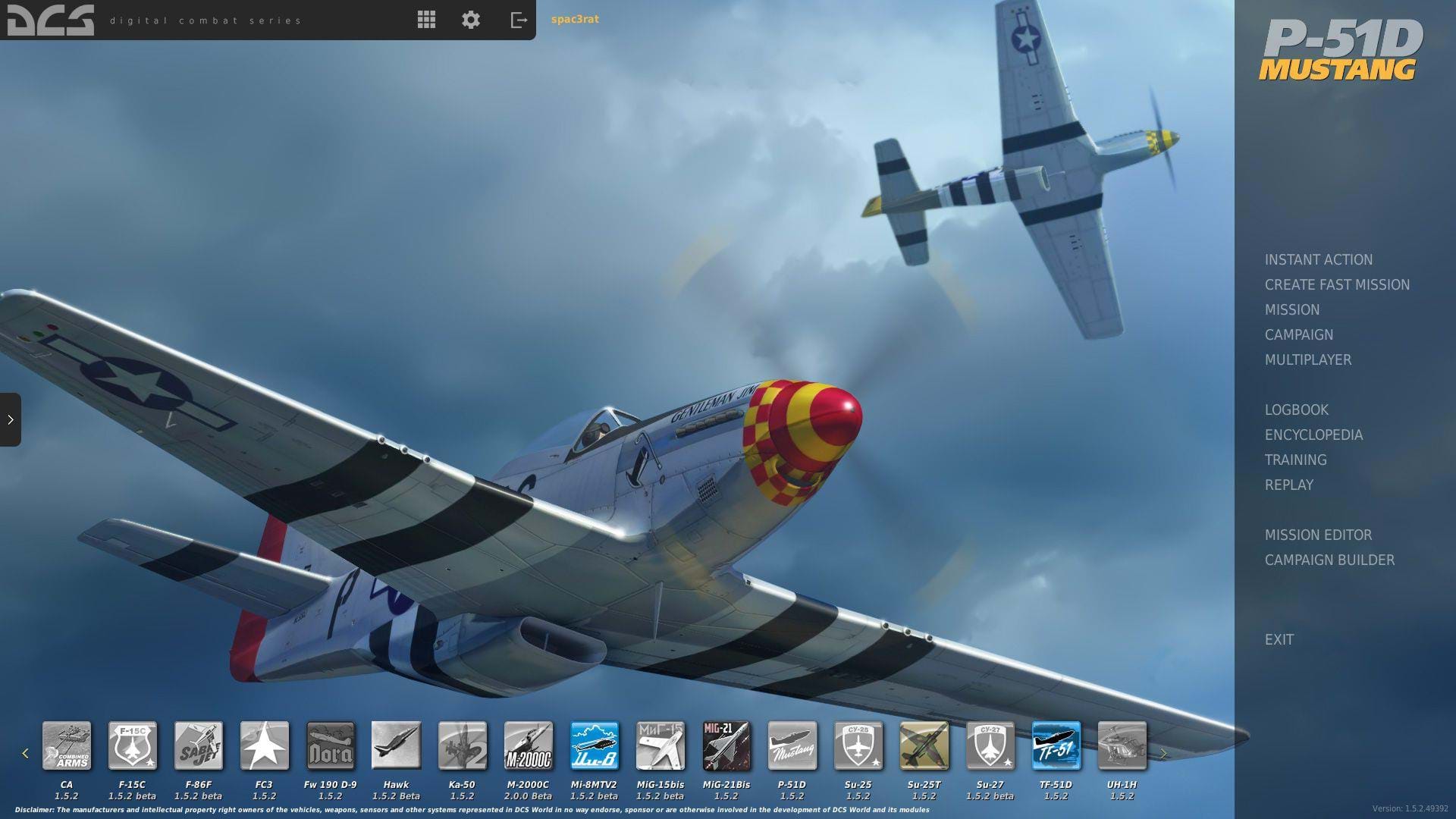 Oh boy. I knew DCS was not a forgiving sim. I knew I was in for something special from the start. But I did not expect such abuse.

Starting a free flight, I was presented with a beautiful rendered cockpit. One of the most amazing pieces of work I have ever seen in a flight simulator. I can only compare it to the cockpit of the A-10, also for DCS. Pretty impressive eye candy, right? It’s not just eye candy. 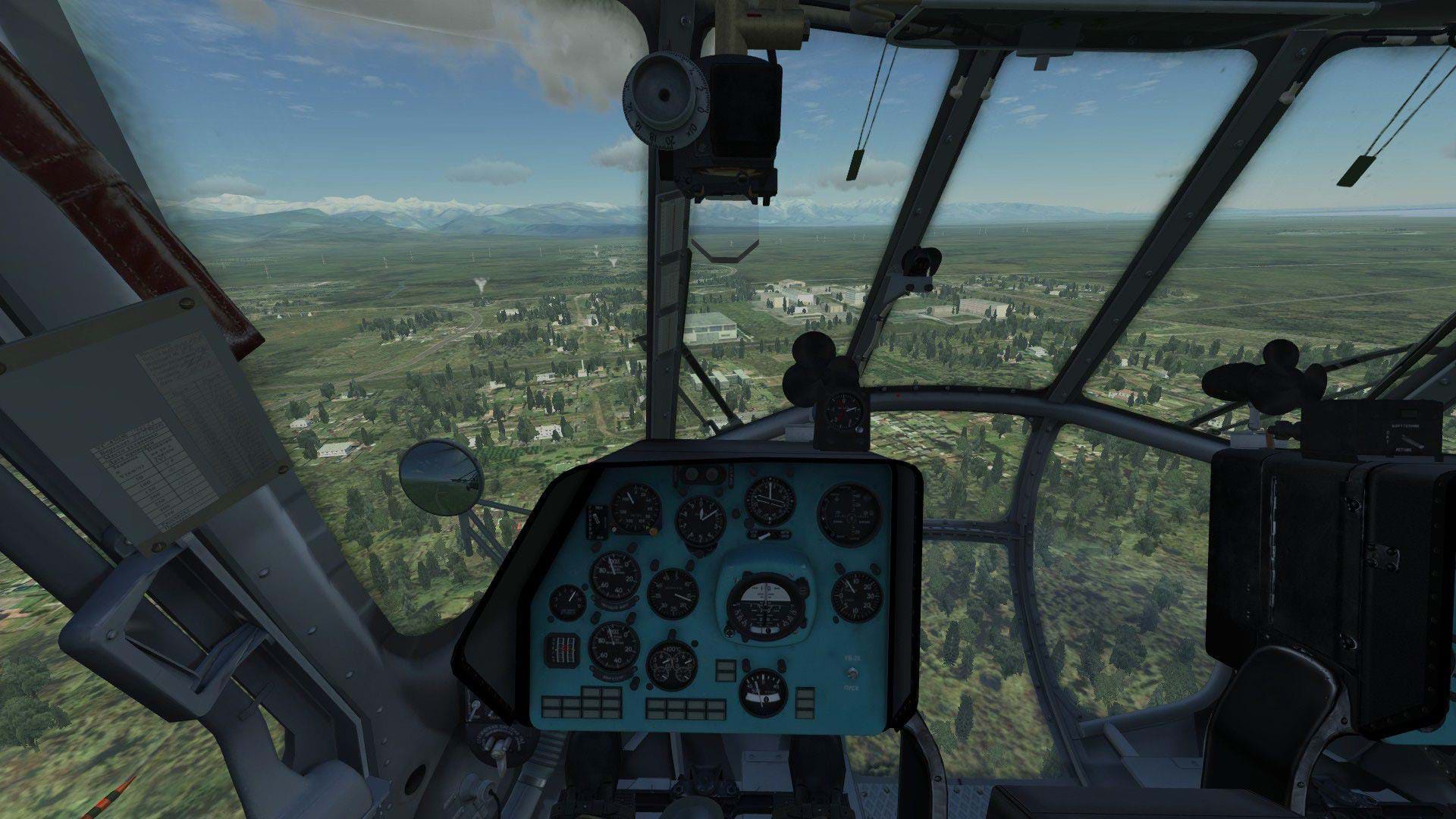 You see, everything in the cockpit works. Every knob and switch and gauge. It’s pretty much a virtual cockpit on steroids. It’s very complete, feels very immersive and it’s just great to watch. Gauges are perfectly readable and you feel like you’re inside an aircraft. Top-notch work. Time to put her in the air. 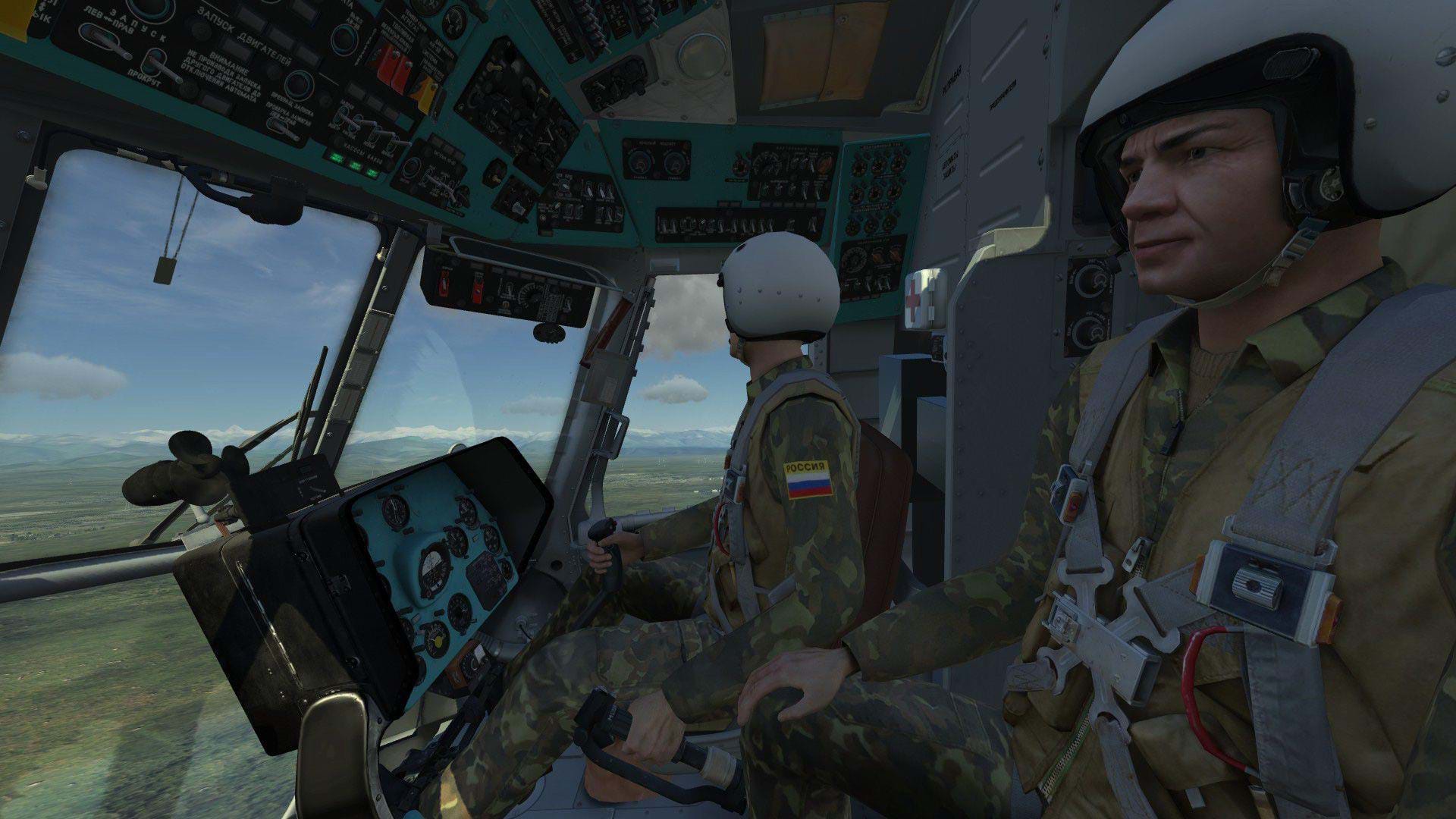 I was waiting for this helicopter to be tough but I wasn’t sure how tough it was until I pulled the collective a bit. She twisted and coughed and called my mom some nasty names while trying to murder me. WOW. She. Is. Nasty.

I’ll have to be honest: I can’t take off decently. I can’t put it on a hover and go smoothly from there. It’s not because this module has any problems. No. It’s because I have problems. Me. I can’t control it. I would have to say this thing is way too realistic for me. Honestly.

Seems like she does everything I ever heard a helicopter wants to do to you. I had to keep on my toes the whole time, even in level(-ish) flight. It’s just that much fun!

There’s not much to do here, really. I just started the simulator, jumped in and everything worked as it should. I didn’t have to take any particular care except reviewing my joystick calibration, which is something normal to me.

Again, it just works. Plug it in, boot the game, it’s there. Nothing else has to be done.

For my second flight I decided to try and push it a bit. I took off clumsily, which I’m pretty sure I read somewhere in the manual that that’s the way to do it so I’m doing it perfectly and took her for a spin around the air base.

I reduced my speed to zero and lower the collective to see what happened and, with a lot of vibration and weird noises, I started falling from the sky. I was witnessing vortex ring state in first hand.

VRS is a dangerous situation in which a helicopter starts descending on its own downwash and it loses lift. If you’re very low, this can have tragic consequences. If you’re high enough, though, and you know what to do, you can get out of it.

I pushed the cyclic forward, which felt a bit sluggish – another effect of VSR – and slowly pulled out of the downwash column, gaining lift again and continuing my flight.

Not happy with the abuse I was inflicting it (yeah I wanted some revenge for the way she was treating me), I took her higher, started a steep descent and pulled hard on the cyclic and collective. The sound of the blades beating the air was amazing. And then g-force ripped the tail boom out of the fuselage. You can see it below. 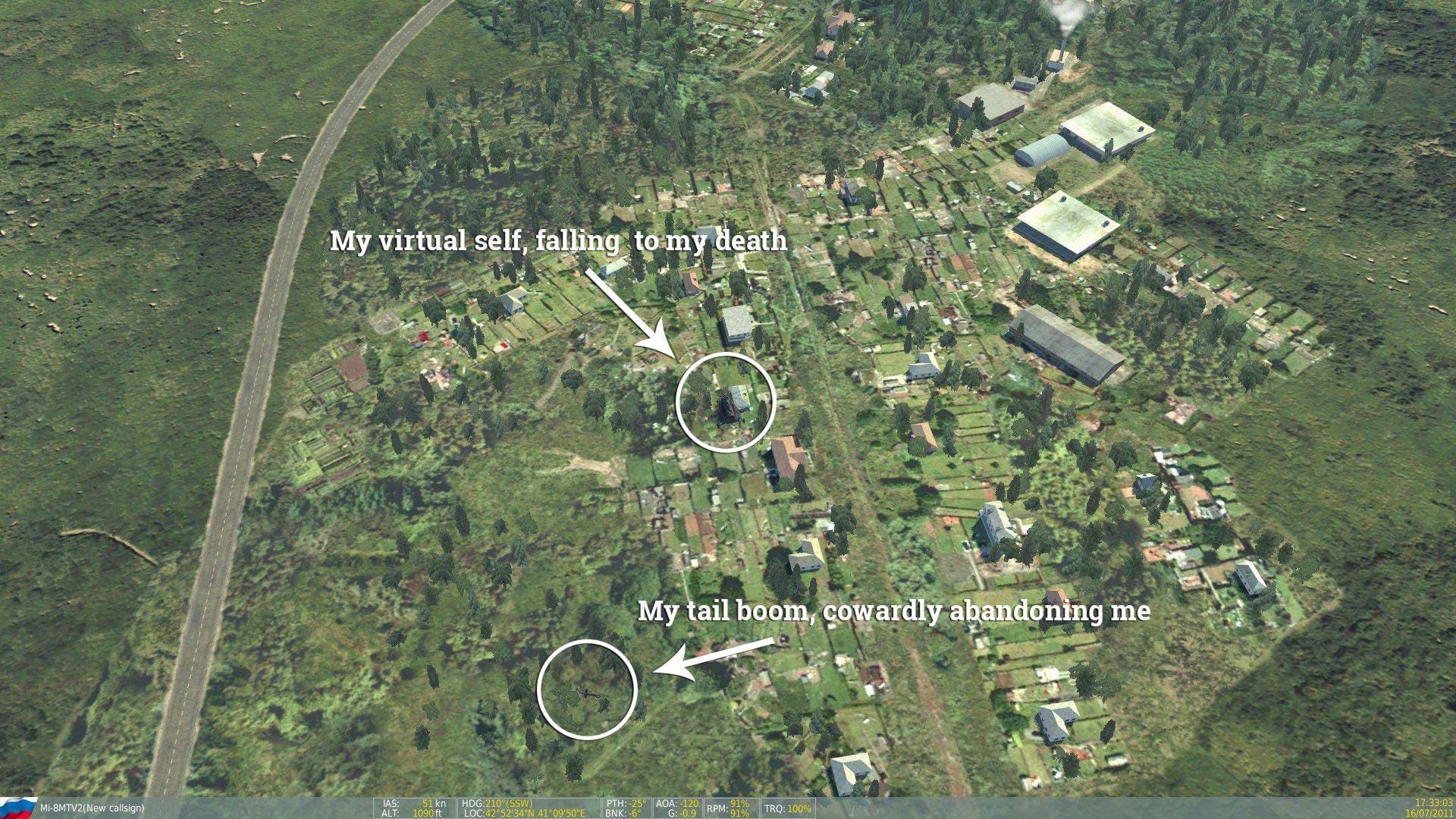 There’s a lesson here, boys and girls: do not abuse your helicopters. They are the ones in charge. And, in this case, she’s boss. Period. Need some more proof? Here you go: 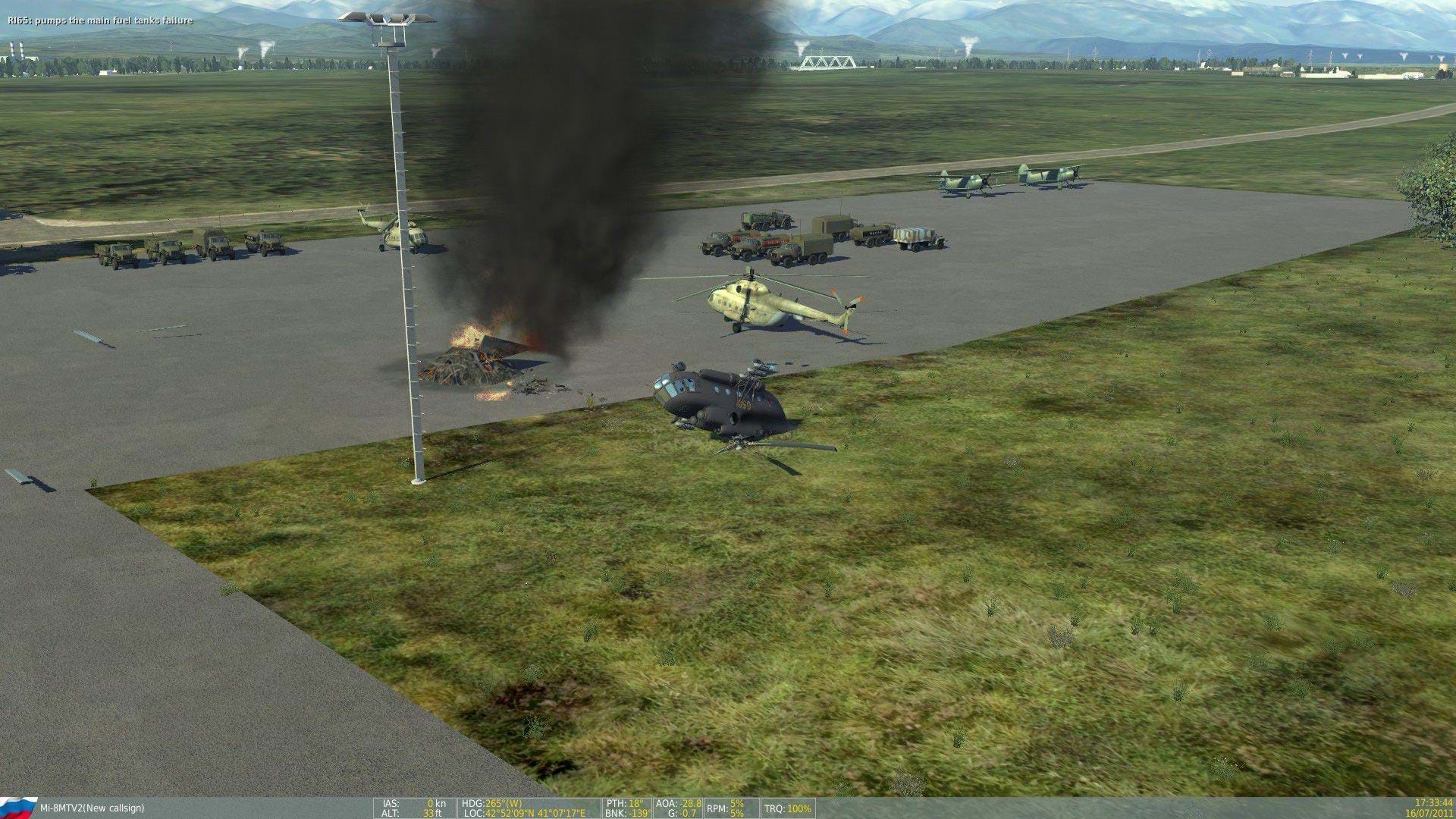 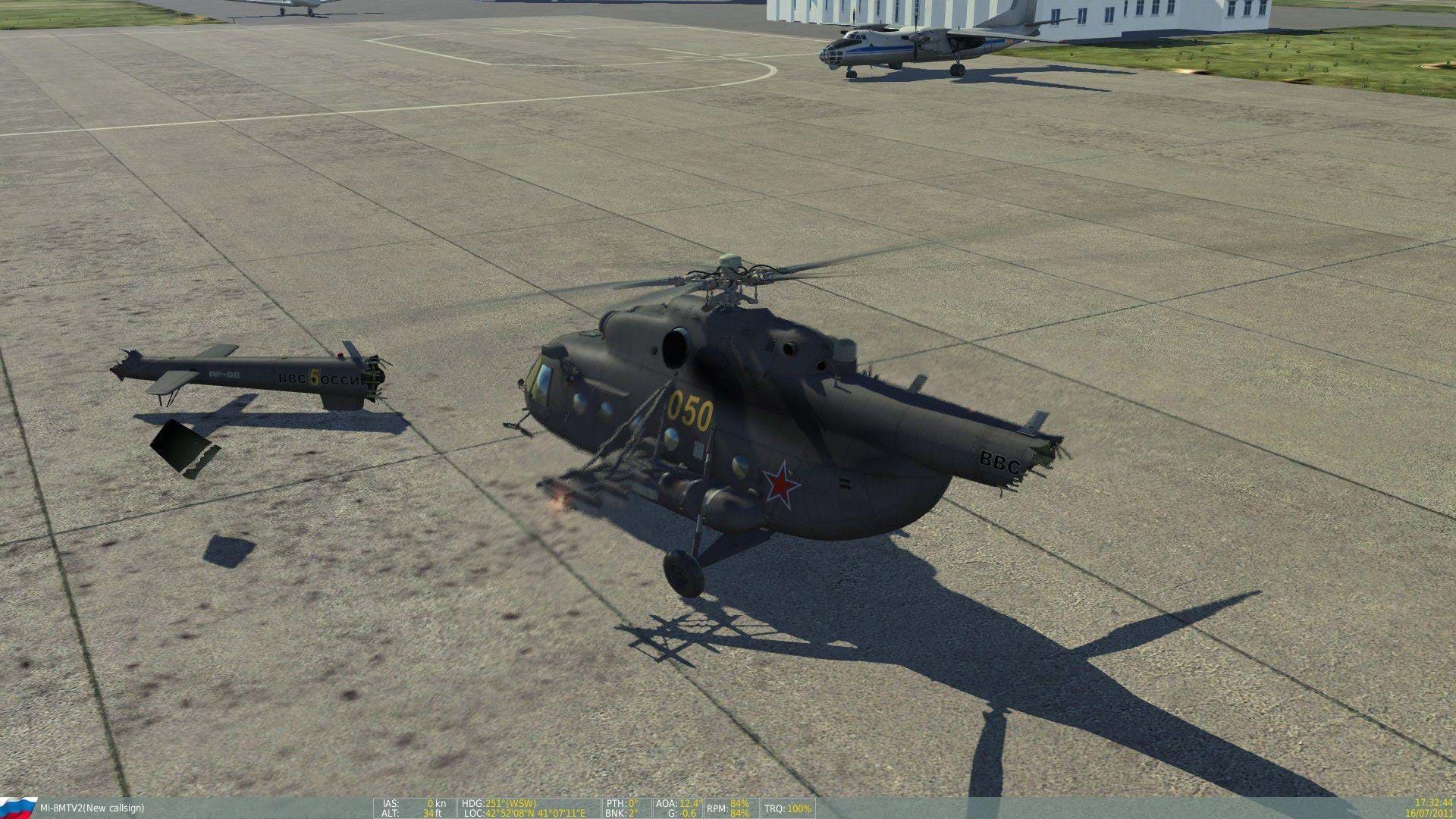 DCS doesn’t have a huge amount of offer like other simulators such as FSX and X-Plane. But that’s not the goal of Eagle Dynamics and it’s not the way this simulator was developed.

Whatever module you get, you’ll pretty much be getting a piece of art. Everything in the cockpit works, systems are realistic. Checklists are realistic. You don’t get a ton of aircraft but the ones you do are top-notch. You don’t get a whole lot amount of terrain – not even close to the whole world – but the one you get? It’s top-notch. And you get great missions along with your aircraft too, which is always a plus. If you’re up for some flying just for the sake of flying, start a free flight session and off you go. You’ll have a blast. Guaranteed. 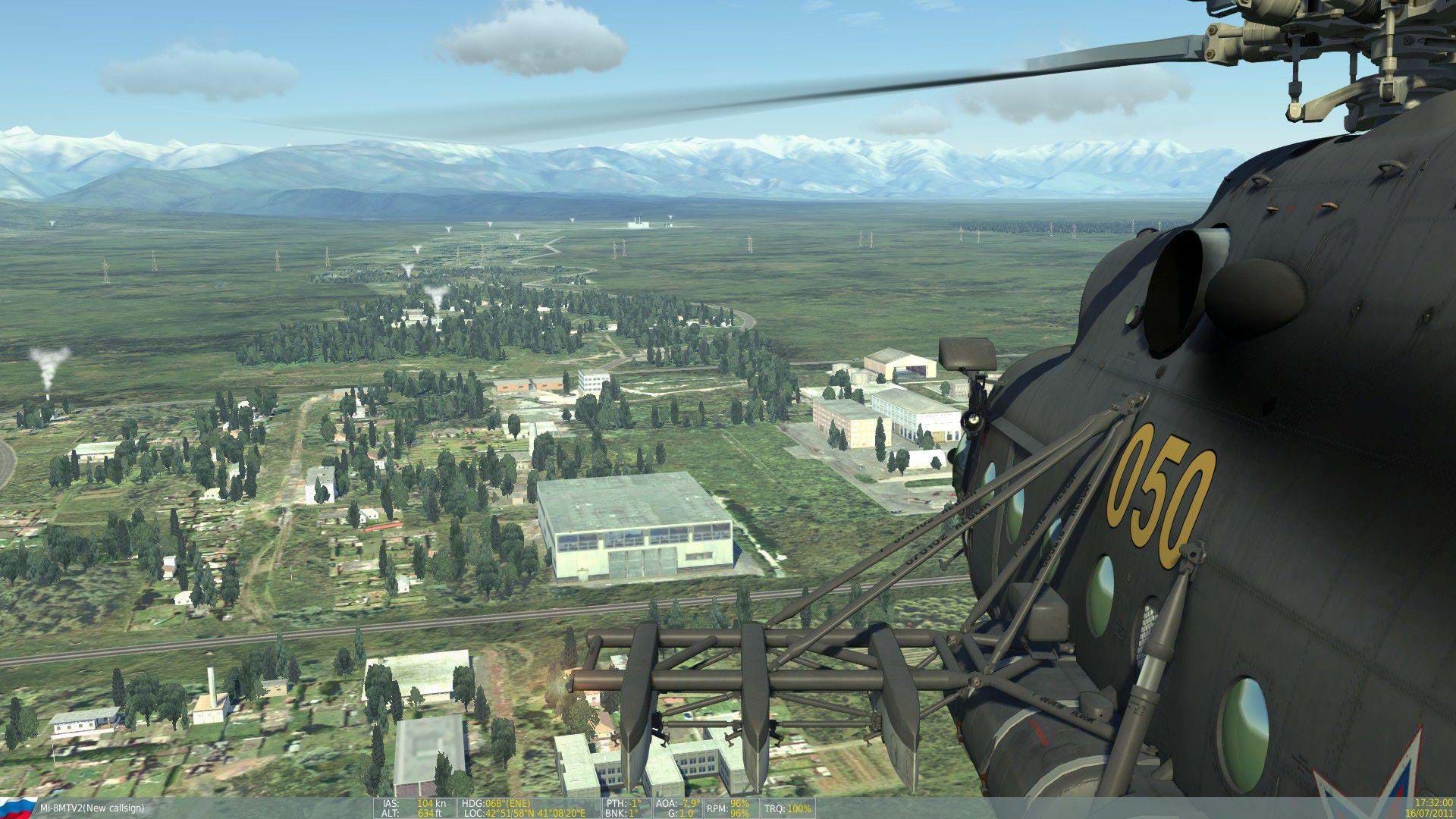 The project manager for the Mi-8 module is actually a real world Mi-8 pilot so you know he wanted to get things right. It seems like he did.

Overall, DCS is quite a hard simulator to learn. My experience with the A-10 and the Mi-8 are quite similar – except the A-10 didn’t try to kill me. At least not that often.

You’ll have a bucket load of stuff to learn. If you want to start in a dark and cold cockpit, you will have to learn all the systems, where everything is and do it using the checklist. This is a simulator. A real simulator. And it kicks serious ass.

Will it replace FSX? No. It doesn’t mean to. It’s not its purpose and you shouldn’t see it that way. This is a whole different level of flight simulation. But it’s sure one you’ll spend a lot of time actually learning and understanding the physics behind flying a helicopter.

You owe that to you.

Other articles in this series