Search and Rescue is one of the most noble and exciting roles helicopters and their crews are capable of performing. These machines carry their highly trained brave crews through all kinds of weather and dangers to save the lives of strangers. Or, in this case, of colleagues. This is a true story of a training assignment that became a real search and rescue mission after 2 F-18s crash near the Canary Islands, Spain

Search and rescue: from training to the real deal 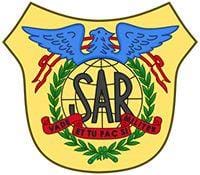 Since I arrived in 2013 to the 802 Squadron SAR with base in Gran Canaria, I always had in mind that perhaps one day I might be involved in what we called a “military SAR mission”.

We all had quite a bit of experience in real search and rescue missions of a civil nature. By that time there were frequent missions in search of small boats (called “cayucos”) for illegal immigrants trying to reach the islands from North Africa. We also were tasked for many medical evacuations of seamen from ships. We picked up the patients with a hoist maneuver from the ship deck, more than 200 miles from land and brought back them to the hospitals in our island, where they received the required medical assistance.

However, none of the members of the squad ever took part in a search and rescue mission of an ejected fighter pilot in our area of responsibility. We shared the Air Force base with a fighter unit, the 462 Squadron, equipped with F-18 Hornet. In addition, the airspace of the Islands was the scene of frequent military exercises, both national and international. Personally, I loved those days in which one could wander off the apron and see next to our F-1 Mirage, F-18 Hornet, Eurofighter and AV8-B Harrier, other aircraft such as the American F-15s, many F-16s of various nationalities, and even some Boeing E-3 Sentry of NATO. In spite of all that volume of flights of military aircraft, during the last years we had not have to carry out any rescue of pilots. 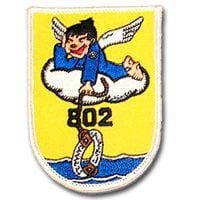 This did not lead us to drop the guard, and we always kept training for this type of missions. We practiced maritime searches every week. We simulated the small inflatable boats that the fighter pilots carry below their seats, known as dinghies, with truck wheels inner tubes with a red cover. A helicopter departed early in the morning and threw one of these “dummy” dinghies to the water. An hour later, a fixed-wing aircraft from our squadron took-off and started the search operation, led by our RCC (rescue coordination center). Once the plane had returned to base, another helicopter took off with an identical mission and after finding the “dummy”, picked it up in a fast hoist operation.

I was returning to the base after one of these flights when PAPAYO (the military control agency in the area) informed us that two F-18 flying in close formation, had just vanished from the radar screens, about 40 miles from our position. They had been trying to communicate with them via radio with no success. After checking that we had enough fuel to reach the area and return to base, we asked the approximate heading to the last known position of the aircraft and we tacked off toward that direction. 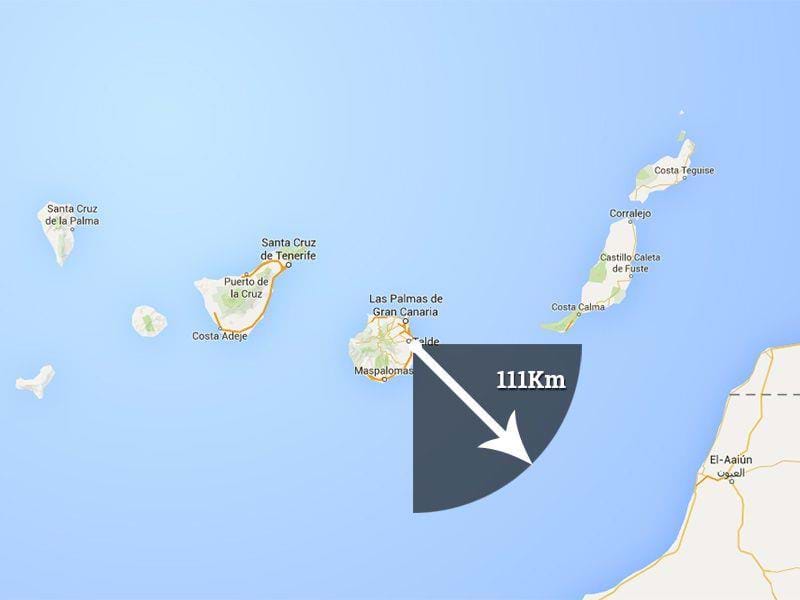 One of the hardest things in a SAR mission is the management of communications, because you need to maintain contact with several agencies at the same time. And in the case of a real emergency, the channels are often saturated. Sometimes it’s really difficult to understand anything. In our case, and after receiving the information from PAPAYO, we had to contact with our RCC to receive further instructions, and with civilian Approach Control to inform them about our position and intentions. In short, we had three different agencies which constantly spoke to us to give new information, or request information from us, all this in an environment of uncertainty because nobody knew exactly what happened to the missing aircraft and the pilots.

Our AS332 Super Puma is a fast helicopter, and may cruise at 130 knots without any problem. However, on this occasion, our calculations showed that the fuel was scarce and we decided to adjust the power for an economic cruise, which was of about 120 knots (indicated air speed). Since we were subject to 10 knots head winds, our ground speed was 110 knots. 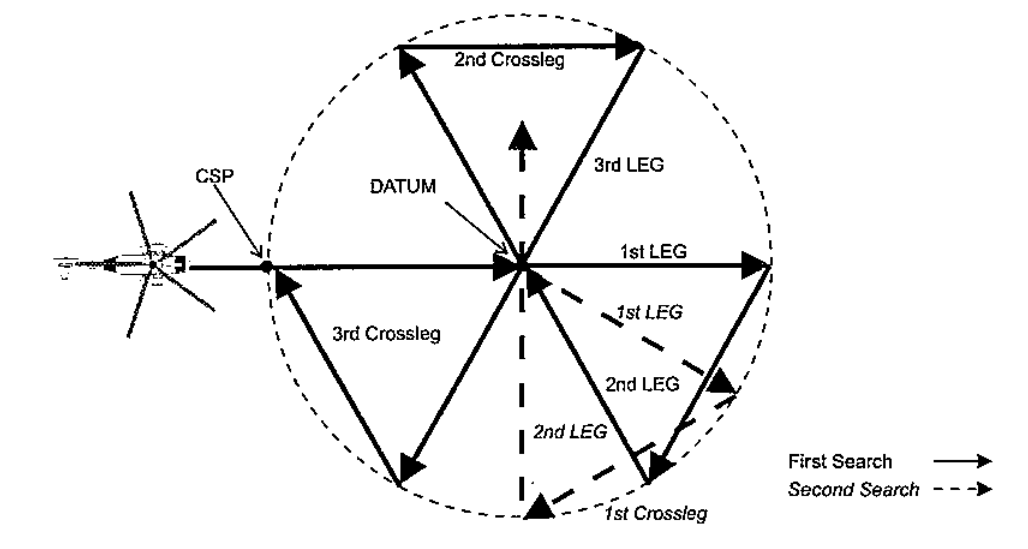 The 25 minutes it took us to get to the area seemed like an eternity. During that time, we improvised a search like the one we had just performed during the instructional flight. For this we used the IAMSAR (International Manual for Maritime Search and Rescue Operations), volume III, which we all knew by heart. Since we had a relatively accurate position in a small search area, we chose the Sector Search pattern.

As you can see in the figure, this search is composed of a few straight legs like diameters of a circle and turns to the right so that the helicopter passes several times over the same point, which is the point where it is considered more likely that the survivor is.

The search waypoints are entered in the FMS or GPS by the copilot before reaching the area in order to fly the search with autopilot. This allows the crew, including both pilots to focus on looking out to spot the target (which is not always easy). The speed and height during the search are variable and depend on visibility and sea state. Larger waves can hide the target. In this case you should fly slower to make sure you don't pass over the target without noticing. The standard parameters are 80 knots and about 500 feet.

When we were almost entering into the area, we were informed that some commercial airliners had reported seeing 2 parachutes, so we already assumed that both planes had crashed and that we would have to recover two pilots from the sea.

Shortly after we started the search, by engaging the autopilot, we saw first a puddle of fuel and the remains of a F-18 sinking. The pilot of another F-18 that had come to the area and had just localized the survivors contacted us immediately through the guard frequency (121.5 Mhz.). He told us he would pass over them firing some countermeasure flares to show us their position. That allowed us to spot them right away so we left the search pattern, disengaged the autopilot and prepared everything to pick them up.

After 10 minutes, both pilots were on board, safe and sound. 25 minutes later, we were landing at the Air Base. We were received by many people, including the base staff and part of the personnel, media journalists and a medical team. An ambulance immediately took the pilots to the nearest hospital for some checks. 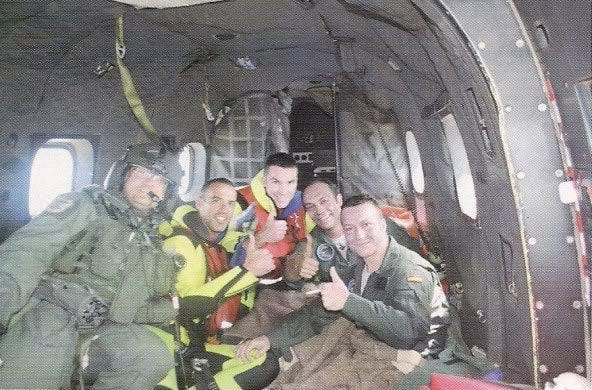 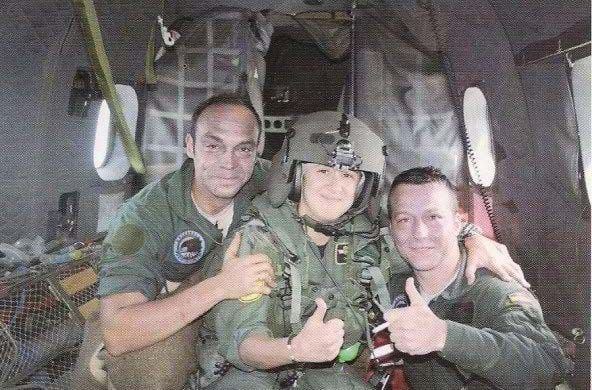 Everybody in the crew was filled with emotion. I knew both pilots very well, as they had been my colleagues in the military academy. I recall their faces just after getting into our helicopter. They couldn’t stop smiling while some teardrops rolled down their faces, showing their immense gratitude for being rescued so soon.

Few jobs are more rewarding than being a pilot in a SAR unit!

My name is Carlos Palacio and I'm nearly 40 years old. My relation with helicopters started when I joined the Spanish Air Force in 1997. First I worked as a helicopter mechanic and soon I promoted to officer and became a helicopter pilot.

I served as a Search and Rescue pilot for 9 years in the 802 Sqn. based in the Gando Air Base, Gran Canaria, Canary Islands. I have logged more than 2000 flight hours, most of them in AS332 Super Puma and in off-shore operations.

I'm keen on flight simulators, which I use for my own training and I enjoy 'tweaking' helicopter models to make them more realistic. At this moment I'm developing an AW139 SAR model for FSX and P3D while studying a Master on Business Administration.
More articles by Carlos Palacio