Do you want to increase the realism of your current fleet? HTR - Helicopter Total Realism is one of those pieces of software we have the luck to encounter once in a while. It's amazingly good at its job, allowing you to control the amount of realism/changes done to your helicopters' flight model. And it's FREE.

Extra realism at no cost

Yes, free. And yes, that good.

What HTR does is process dozens of user-defined parameters and make forces act upon your aircraft in a realistic matter. HTR uses Fred Naar's own physics library, which took him quite some time to develop and tweak making it one of the most complete and accurate pieces of code for helicopter flight simulation physics. 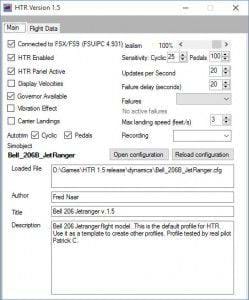 HTR communicates with FSX and gets data about your aircraft and what's doing and what's happening around you: wind speed, direction, your own attitude and everything else that's possible to get and relevant to understand what should be physically happening to your helicopter. All this huge amount of information gets into HTR where Fred's library kicks in and the magic is done.

In a split second, everything is calculated and HTR sends other information back to FSX, telling the simulator what forces should act in what way on your aircraft. And, if you're not careful, hell may and will break lose. You see, you're not flying your old regular default Bell 206 anymore. Your steady, predictable old friend just turned into a heartless, sensitive, hard to control bastard.

And. It. Rocks. It's amazing! If you wish, you can revitalize your entire fleet. As long as someone already released a config for your models or you make, all your helicopters can gain a new life. And you can learn how much you really know about controlling your helicopters.

But fear not. Fred's a nice guy and he has a heart of gold. He wouldn't just sit idle and see people smashing their helicopters all over the ground. You have a realism slider that allows you to define how easy or how hard our friend physics should be on you. And you might want to mess with it a bit because your skills might not be as great as you thought they were. Trust me: I know.

Before installing HTR you might want to install FSUIPC if you don't have it already. You can purchase it to get access to a hug amount of great features, but FSUIPC is free, so don't worry. HTR uses FSUIPC to connect to FSX so you don't have an option here.

After you get and install FSUIPC, you can grab a copy of HTR from our friends at HoverControl. You will need to register there but don't worry: they won't spam you or anything. They are a group of trustworthy, amazing fellow helicopter fans like you and they protect and preserve their members' privacy.

Once you get HTR, just unzip it to a folder of your choice. That's it. Some users may be a bit baffled because there's no installation file but there's actually no need.

Giving it a try

Got FSUIPC? Got HTR? Good. Time for a test drive. Boot up FSX and after you get to the flight selection menu, you can start HTR. If you try to open it before booting FSX or before reaching this screen, you'll get a warning indicating FSX should be running. So do that.

Create a flight with the default Bell 206, make sure you have this config file loaded on HTR and get ready to roll. The difference between the default flight model and the one HTR will throw on you is very big and you'll notice it right away.

Building your own settings

HTR allows you to build your own settings for the helicopters you love. Fred was very kind as to include an Excel file explaining a lot of the 200+ settings HTR uses. According to Fred, once you grasp how everything works, making a new config file should take you 2 or 3 evenings which is pretty amazing for something that changes the behavior of helicopters so drastically.

You can get FSUIPC, which HTR uses to connect with FSX here: http://www.schiratti.com/dowson.html

Get HTR at here at HeliSimmer.