Feb 09, 2017 | by Joe Hudson
Tutorials, Recommended reading
Article, Tutorial, Ground Effect
Ground effect is something that everyone seems to be aware of, but not many completely understand. And there can be a lot of confusion and misconceptions as to what it actually is and how it effects helicopters.

The most common explanation or description of ground effect is that the aircraft, Helicopter or Airplane, is sitting on a “cushion of air. My goal with this article is to explain away the cushion of air way of thinking, and replace it with a deeper understanding of helicopter aerodynamics.

Vectors, Resultants and Angles, Oh MY!

So to explain this, we’re going to need to go back to basics for a little while. This article is going to have a lot of Diagrams so it’s important to know what we’re looking at, and what it means. Now, I’m not a math or Physics wizard, but I’ve had to learn a little bit of it so I can properly explain aerodynamic theory to students. I also understand that some of you are out there in the internet world actually are math and physics wizards. And to you Wizards out there reading this, I ask you to bear with me as I do my best to explain a few things to my people, the non-wizards, so everyone is on the same page.

A vector is a symbol that will display a direction, and magnitude of a force. The classic examples of vectors are in the Lift, Thrust, Drag, and Gravity diagrams that illustrate the individual forces acting on an aircraft or airfoil. Vectors are almost always depicted as a straight line with an arrow at one end. The length of the line shows the magnitude. For example, the longer the lift vector, the more lift is being created. The arrow at the end of the line depicts the direction of that force. For example, the drag vector is always depicted as going in the opposite direction as thrust indicating that this force is acting in an effort to slow the aircraft. 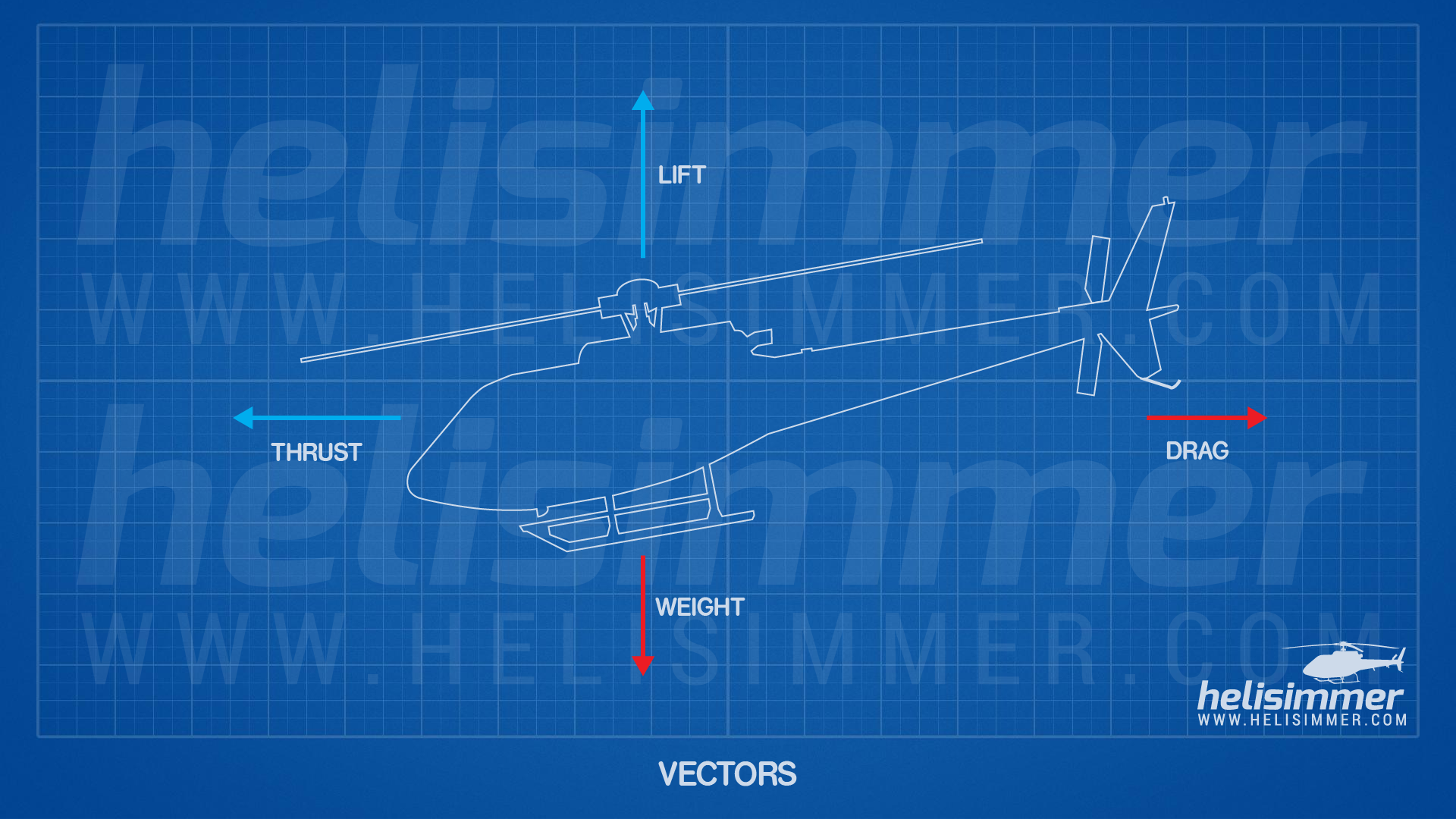 The resultant is basically the combined effect of two vectors that interact with each other. With helicopters, as always, it’s not that simple. There’s always a lot more to what is going than what the textbooks say, and sometimes the effects of the vectors depicted can look like the resultant force is backwards. This has a lot to do with the way air flows down through the rotor. It isn’t defying the laws of physics, it’s just making it difficult to visualize. 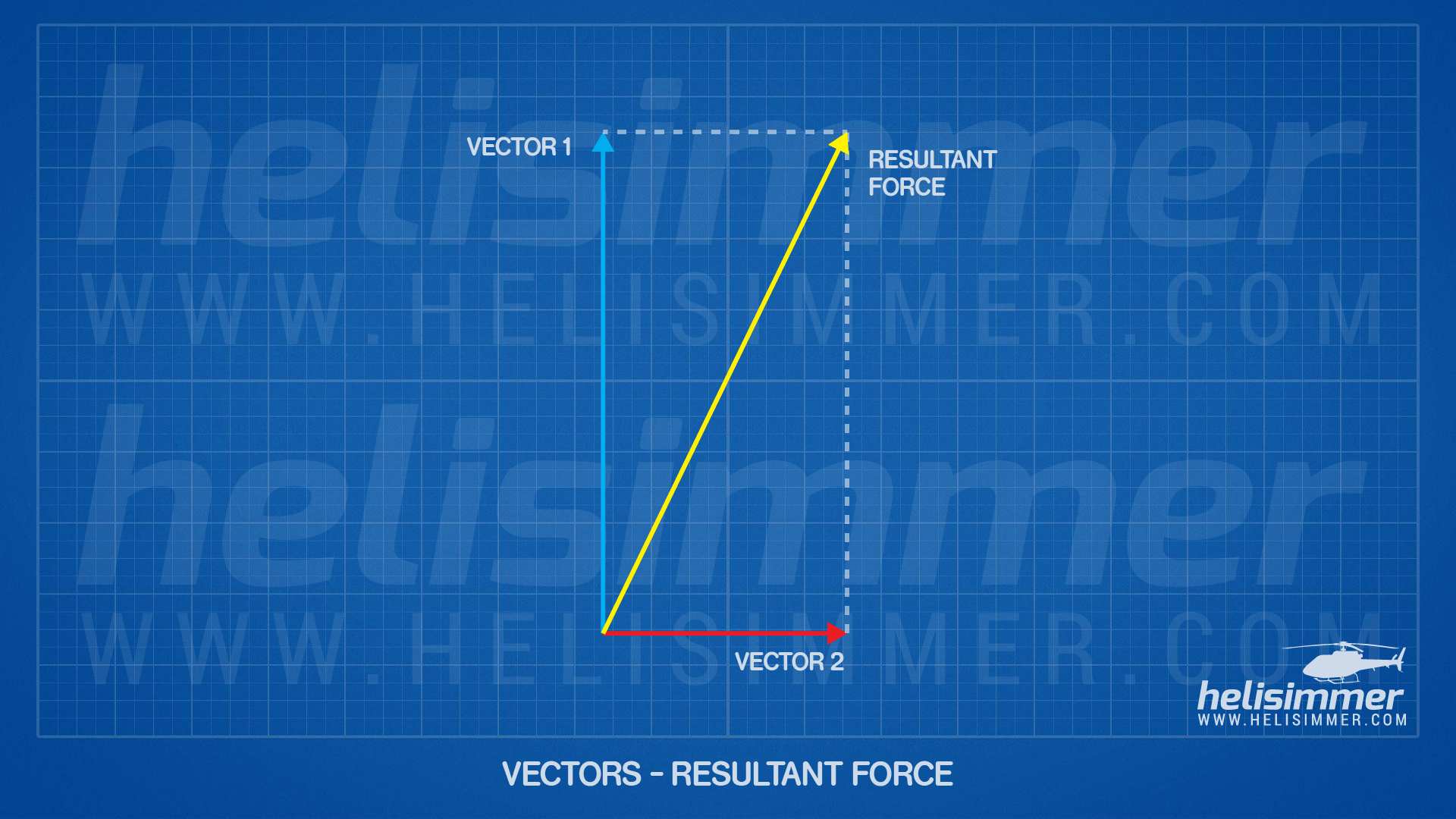 The wings on an airplane create lift by moving air over their top and bottom surfaces. Generally speaking (and for the benefit of explaining this in the simplest form possible), the air on earth doesn’t move fast enough to lift an airplane off the ground on its own, basically it just kind of sits there. So, the pilot uses thrust to push the whole airplane through the air. This gives the wing the “wind” it needs to generate lift. Helicopter pilots can’t be bothered with having to constantly move their entire aircraft through the air just to get off the ground. So we rotate the blades to get the same effect. This movement of the blades results in what’s called Rotational Relative Wind. Because the air is pretty much standing still (I know the air on earth is constantly moving, I’m just keeping things simple) this movement through the air creates wind that is relative to the airfoils surface. The angle that the Rotational Relative Wind makes contact with the airfoils leading edge can be affected by many things, but when talking about ground effect, Induced flow is the biggest factor. We’ll talk more about induced flow a little later, but when induced flow affects the angle of the relative wind, we get the Resultant Relative Wind. Which you may have already put together from our discussion about vectors and resultants above, the resultant relative wind is the result of the rotational relative wind vector, and the induced flow vector. That may not make a whole lot of sense now, but hopefully it will in a moment. It’s also very important to note that the lift vector of an airfoil likes to stay perpendicular to the relative resultant relative wind. So, the closer the resultant relative wind gets to the chord line, the further back the lift vector is displaced. 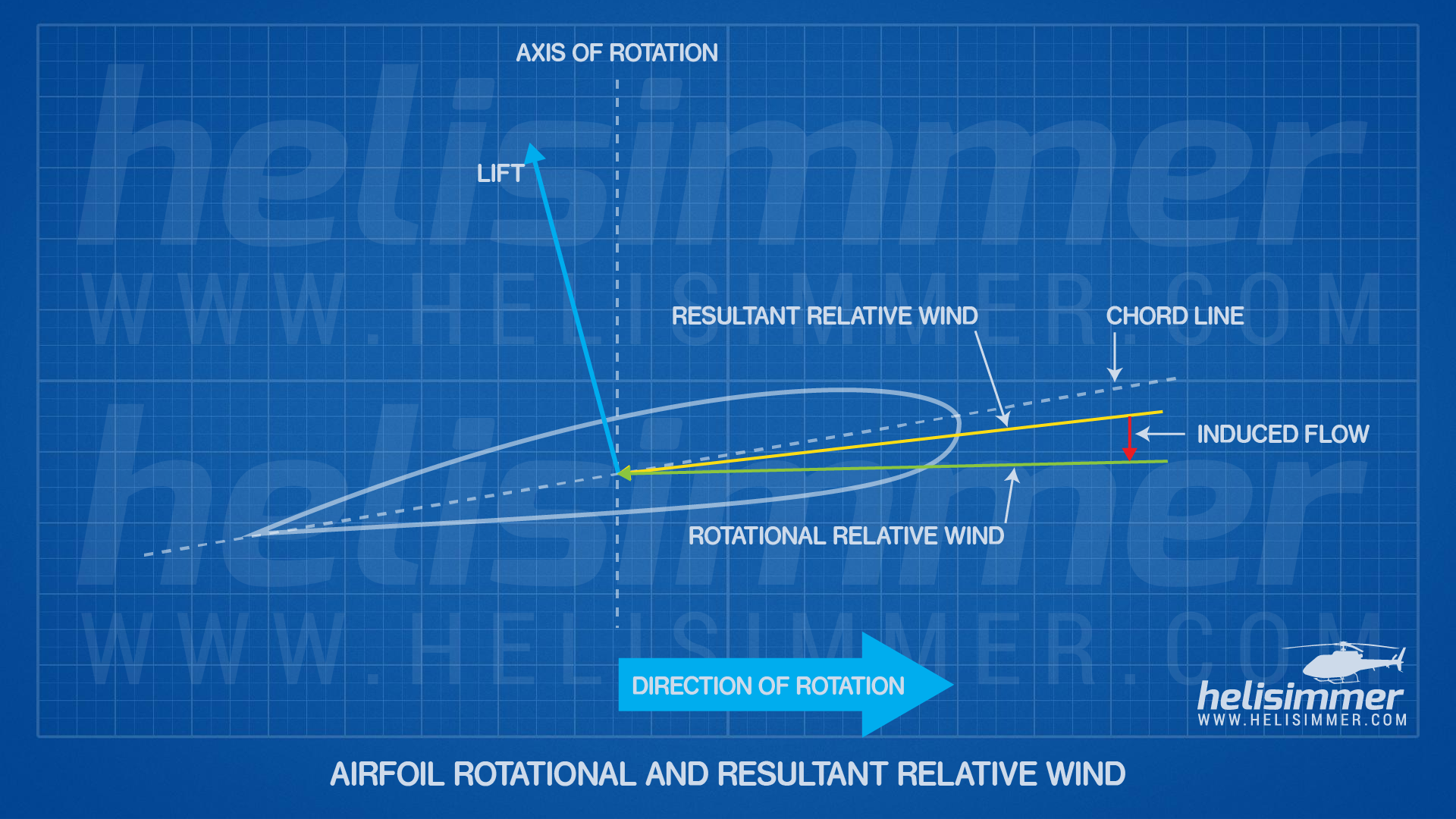 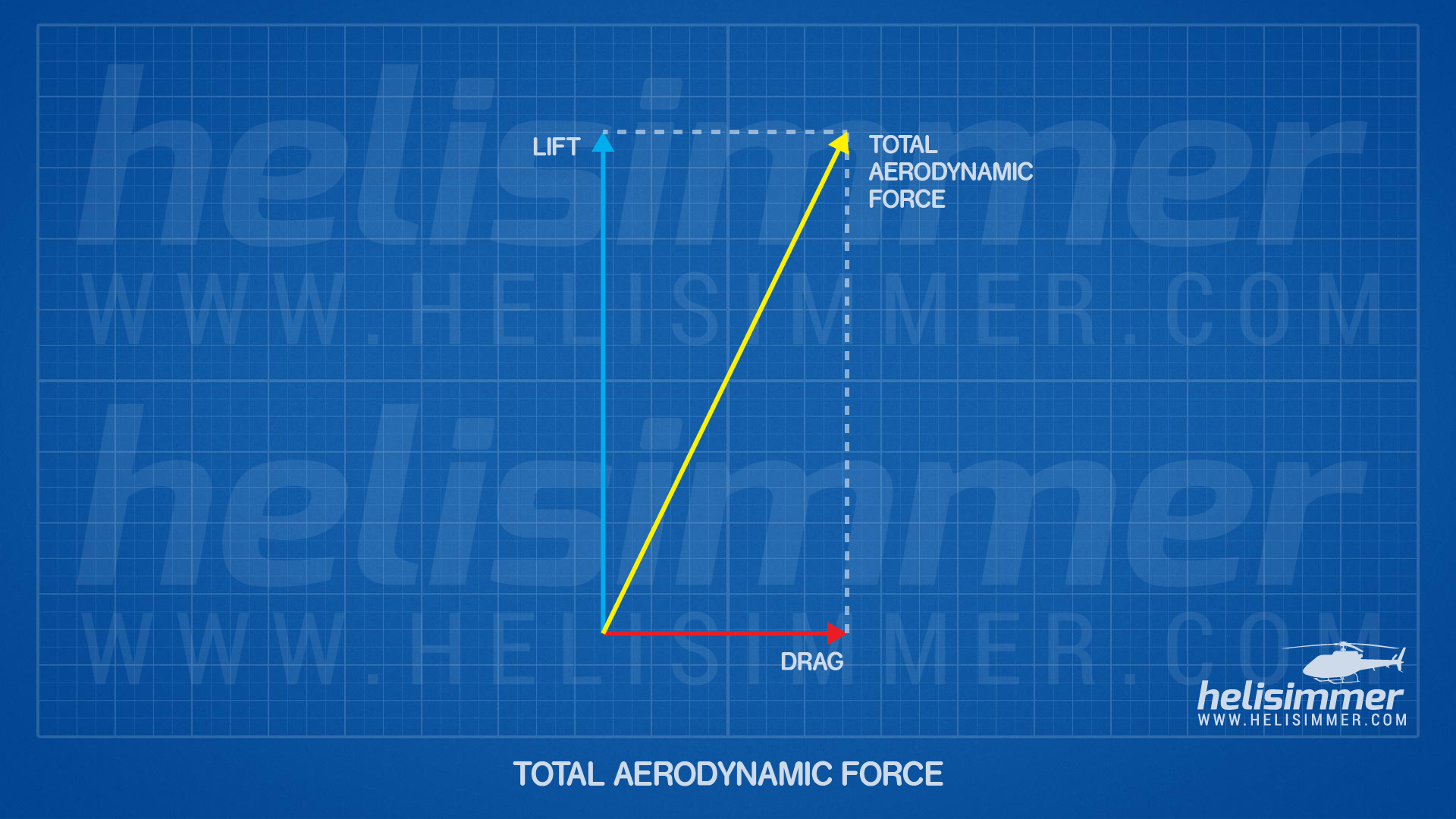 Angle of Incidence vs Angle of Attack

The Angle of Incidence or AOI, also known as the mechanical angle. This is the actual physical angle that the pilot commands the rotor blades to via the collective or the cyclic and is measured between the airfoils chord line, and the rotational plane. The rotational plane is the path the rotor blade will follow when it’s spinning around the rotor mast. It is also usually in line with the rotational relative wind vector. AOI is often confused with the Angle of Attack or AOA, and to understand ground effect, it is important to know the difference. 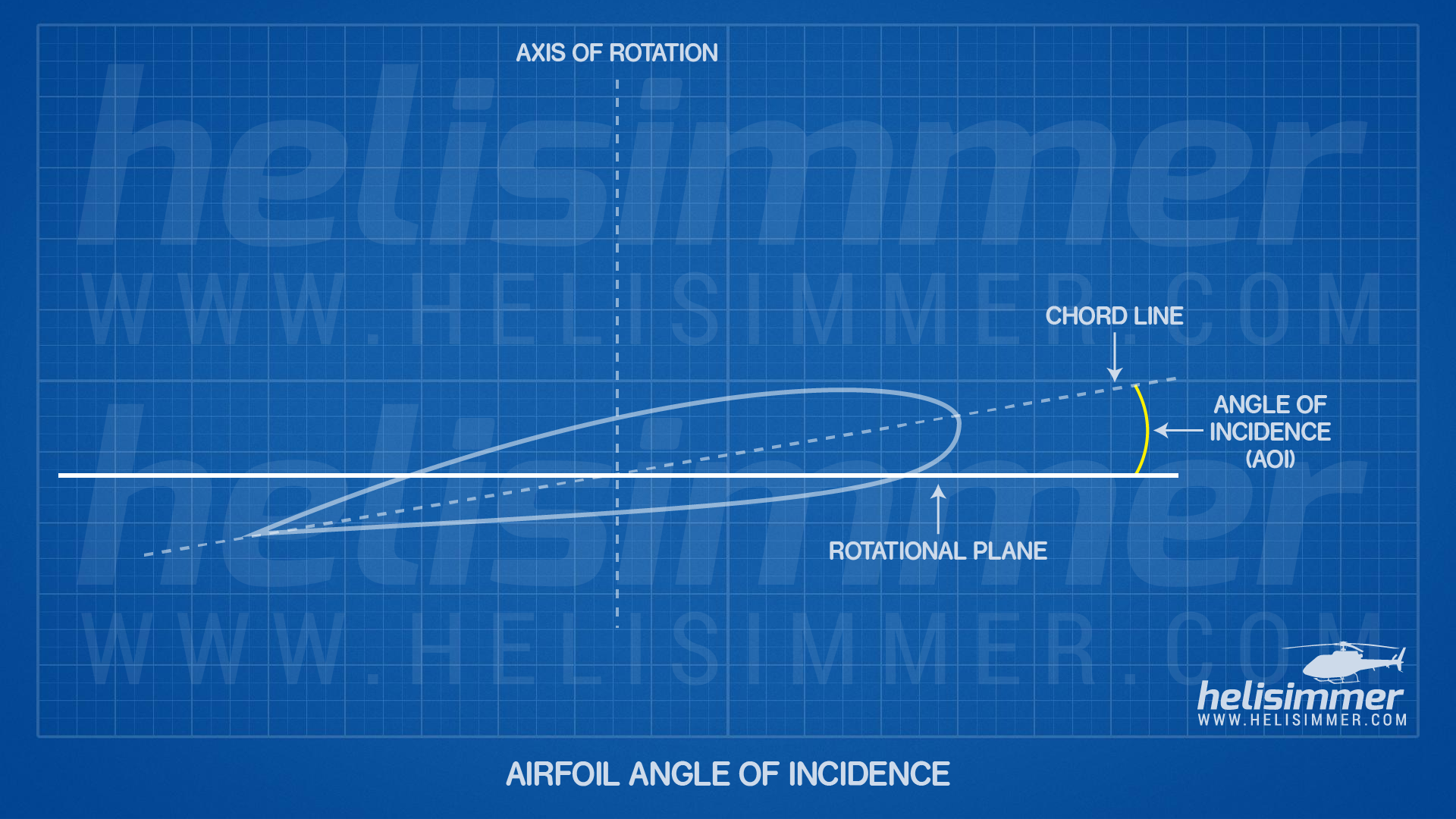 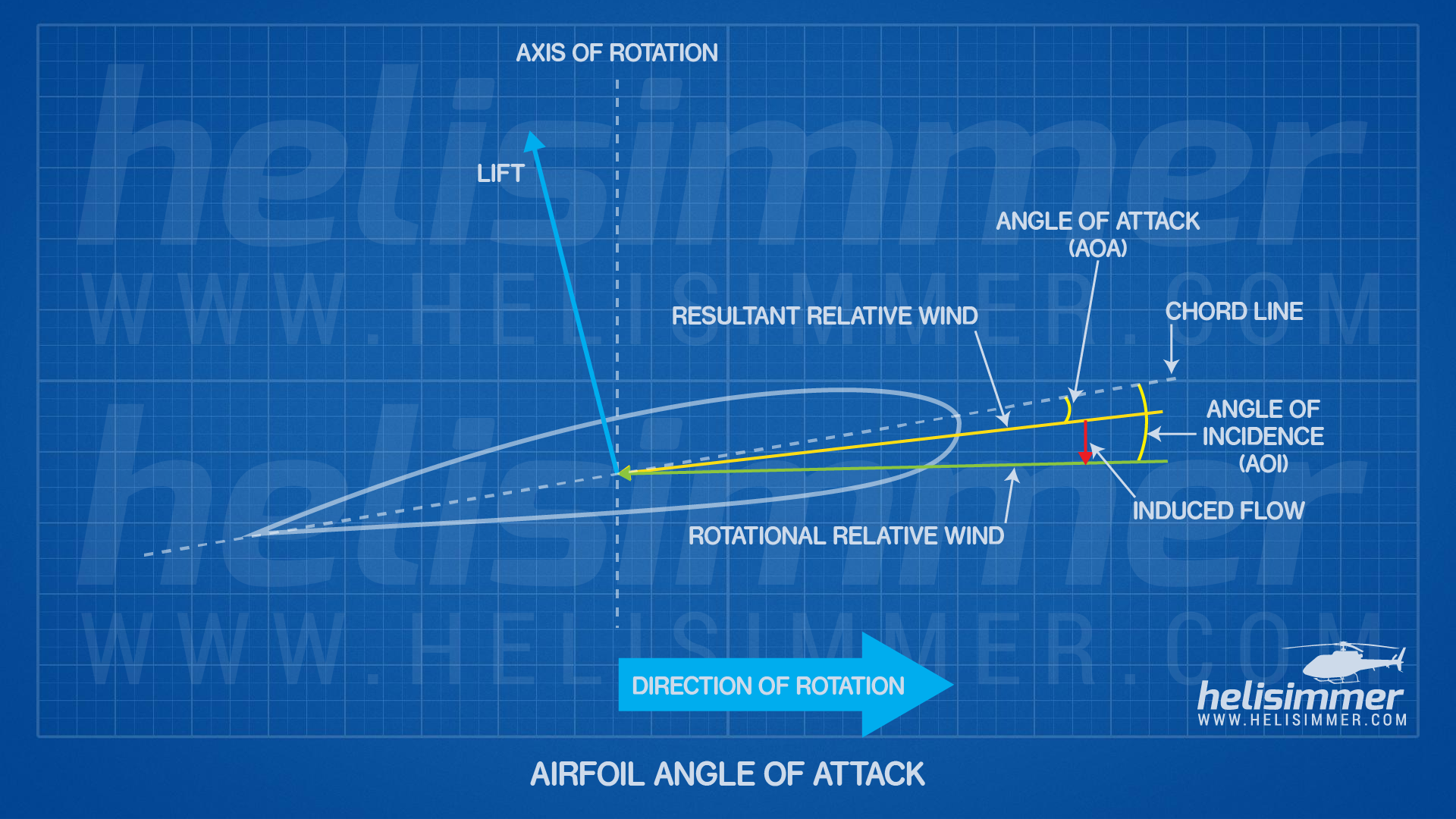 It’s All About Drag

As we discussed earlier, a helicopters rotor creates lift by moving the blades in a circle. When the pilot increases the collective, the rotor begins to draw air down through the top of the rotor system. This air flow of air is called induced flow. Induced flow also creates a certain amount of induced drag, which is a big part of what ground effect really is. Because of the way drag works, the faster the induced flow, the more drag is created. For the wizards out there it’s expressed mathematically as this;

For my people, the non-wizards, the important part of all of that math gibberish is the V2. It means Velocity squared, which to us means the faster you go, the more drag you’re creating. And more drag, means more power.

Putting it All Together

So to start making sense of all this we’ll start up high. When at an out of ground effect (OGE) hover, induced flow is unrestricted and can zip down through the spinning rotor system as quickly as the rotor can pull it through. This is illustrated by the long induced flow vector in the diagram. Combine the induced flow vector with the rotational relative wind vector, and we have our resultant relative wind. So in order to obtain the AOA required to hover, a large AOI is needed. And as we all know, more pitch in the blades equals more drag which requires more power to keep the blades turning. 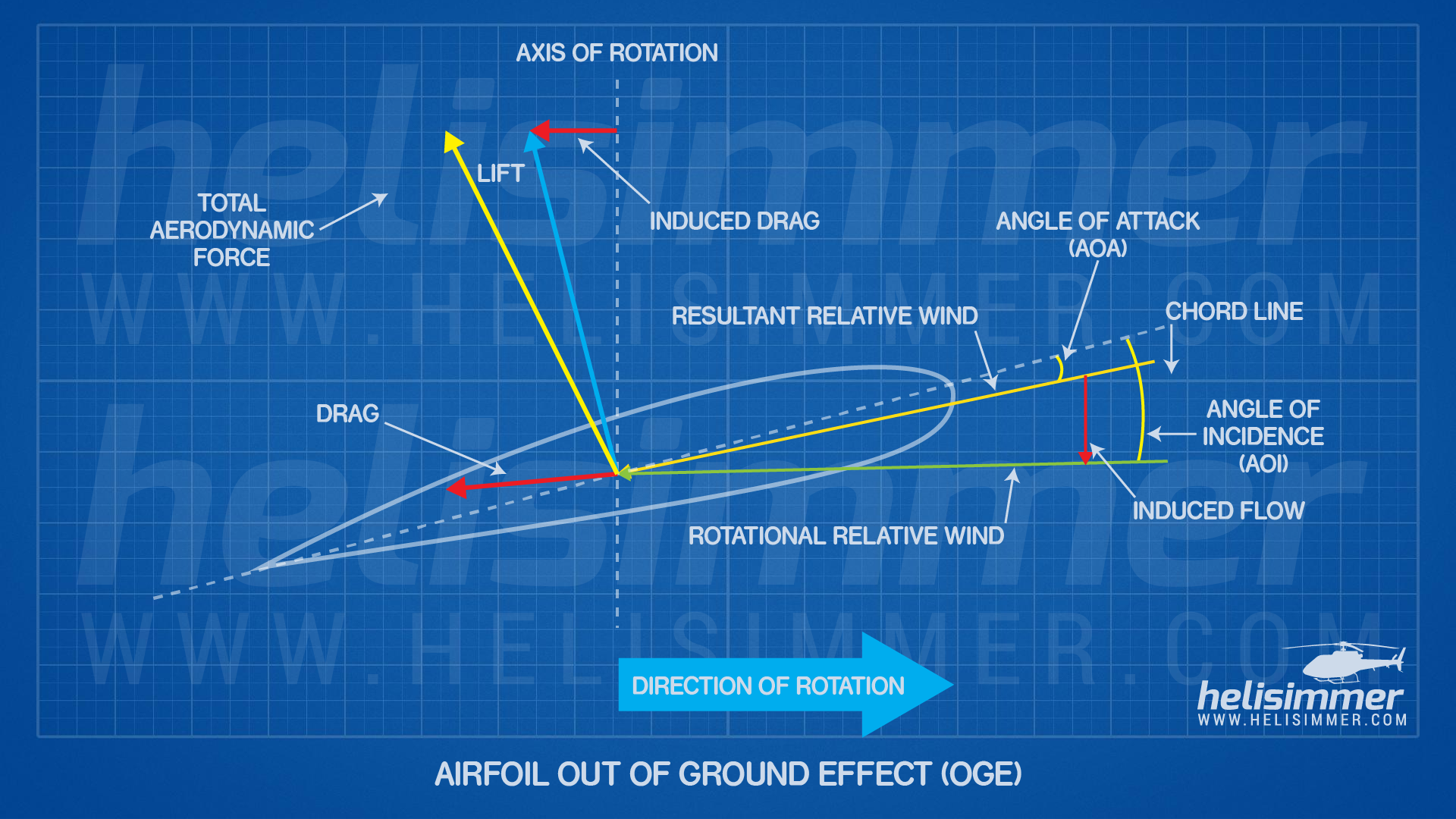 Depending on who you talk to, a helicopter is in ground effect when it is hovering anywhere from one to two rotor disk lengths above the ground. This also depends on the type of helicopter and the surface the helicopter is hovering above. When hovering in ground effect (IGE) the induced flow of air comes down through the rotor system, hits the ground and then rapidly begins to slow down as it changes direction from vertical to horizontal. The ground acts as a barrier that restricts the velocity of the airflow as it is drawn down through the rotor system, unlike our OGE scenario where the airflow was uninhibited.

Now, this is where the cushion of air misconception comes from. Some interpret this slowdown of air as cushion of trapped air that the helicopter can rest on. This interpretation of the cushion of air theory is that this trapped air pushes back against the rotor system utilizing newton’s third law. Considering all the physics involved, there is some of this at play. But because the helicopter isn’t hovering in a closed system and is free to go where ever it likes, the air takes the path of least resistance and is pushed away from the aircraft horizontally along the instead of pushing back up against the heavy helicopter. So, what is really happening here?

In the diagram below we can see that due to the slowing of the induced flow our induced flow vector is much smaller. We can see how, combined with the rotational relative wind vector, our resultant relative wind has roughly the same angle of attack as our OGE hover, but with much smaller AOI. The lower blade pitch setting creates less drag which requires less power to maintain rotor RPM.  The reduction of drag also gives us a more vertical total aerodynamic force, which increases efficiency. 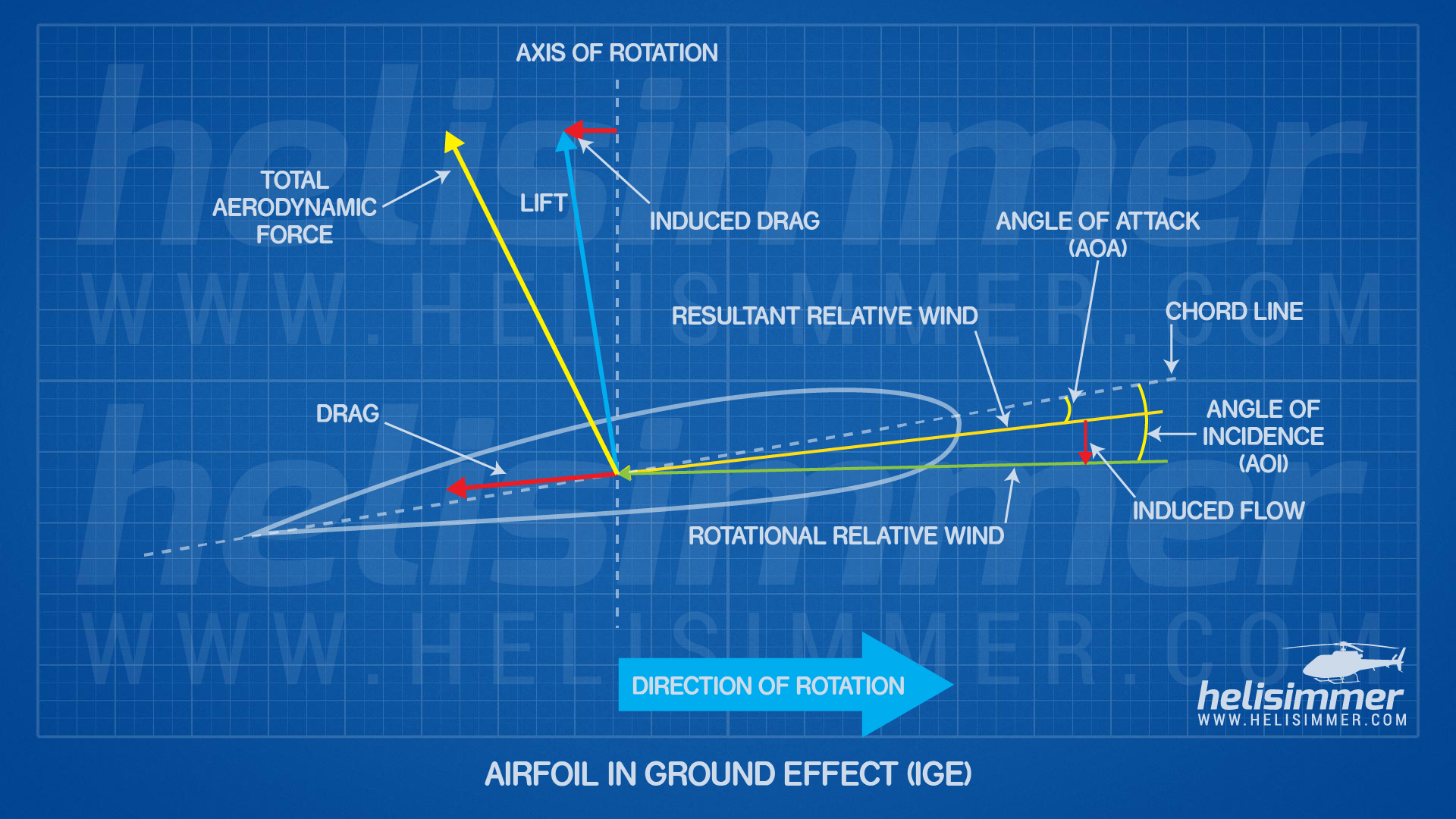 Reduced induced flow velocity isn’t the only thing that causes us to benefit from ground effect. Being in ground effect has the added benefit of reducing the size of rotor the tip vortex produced by each blade as it travels through the air. Vortices produce a type of drag called Form Drag. Some say that Pressure drag and Form Drag is the same thing. While others say Vortex drag is its own type of drag different from the other two. I’m not here to argue any of those points; I just want you guys to know that large vortices create more drag on the rotor. Any time an airfoil is creating lift, it’s creating a vortex. That vortex is simply the higher pressure air underneath the rotor blade, seeking the lower pressure air on top. These two air masses always find each other, but their union is the most dramatic at the tip of the rotor blade where they create that swirling vortex as they meet.

So when hovering OGE, once again our air is flowing around free and unobstructed. This means that there is nothing to stop the high pressure air from seeking out and finding the lower pressure air. Add to that our increased blade pitch angle required for the OGE hover, and we’re creating some pretty big vortices that create even more drag, which means we need more power to hover. 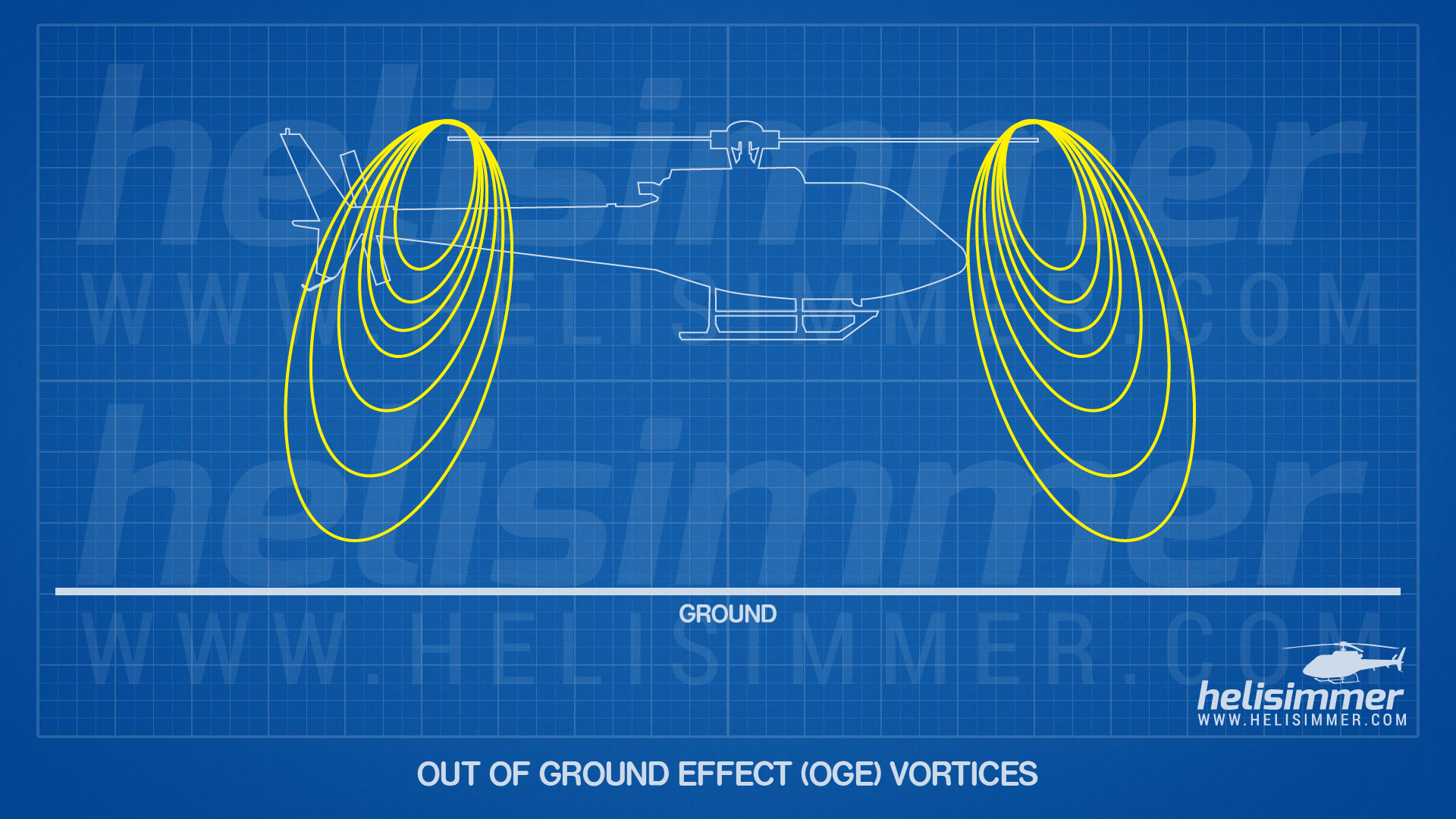 Now, let’s get back closer to the ground where we can get some help with this. When a helicopter is hovering in ground effect, the high pressure air that would normally find its way back to the low pressure air hits the ground instead, and just like our induced flow, it gets re-directed and flows outward horizontally away from the helicopter in the form of rotor downwash. This prevents a lot more of the high pressure air from reticulating and helps make the vortices smaller which reduces drag. Smaller vortices equal less drag, which means less power required. 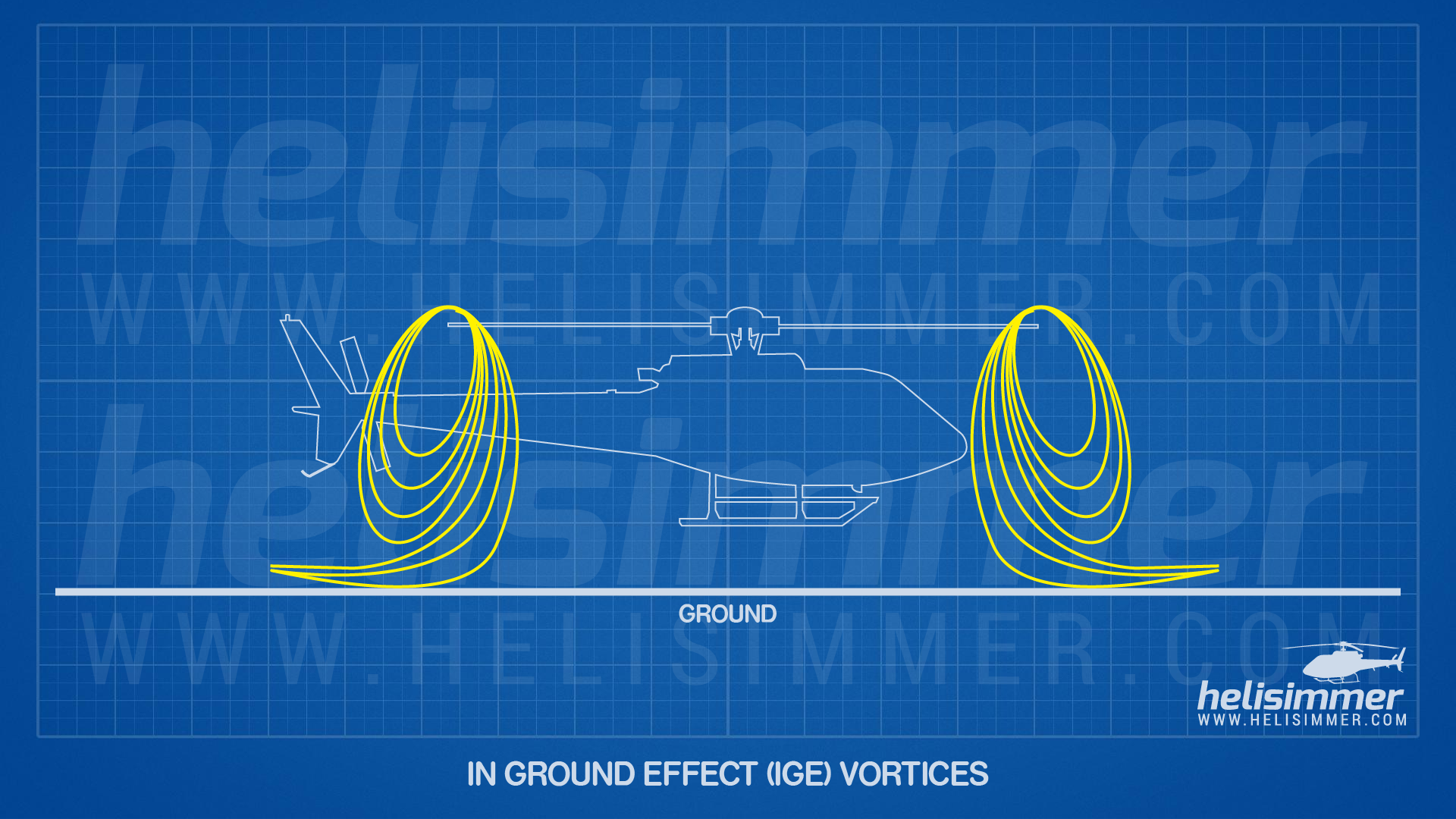 Ground effect in its most basic form is a simple concept that’s really easy to misunderstand. Now, just like everything else with helicopters, there’s more to it than what we covered here. The benefits of ground effect are also dependant on the surface the helicopter is hovering over. For example, the effects are reduced when hovering over water, or tall grass. But all that is beyond the scope of what I intended this article to be. I hope I was able to shed some light on what ground effect is, and what it isn’t, so all the non-wizards out there like myself, have a better understanding of what this aerodynamic phenomenon actually is.