One of the first questions we usually hear from those that wish to enter the helicopter flight simulation hobby is pretty standard: what is the best helicopter simulator? Given all the market has to offer, this is quite a hard question to answer.

Please note: this article was written in 2016. For an updated version (from 2019) click here 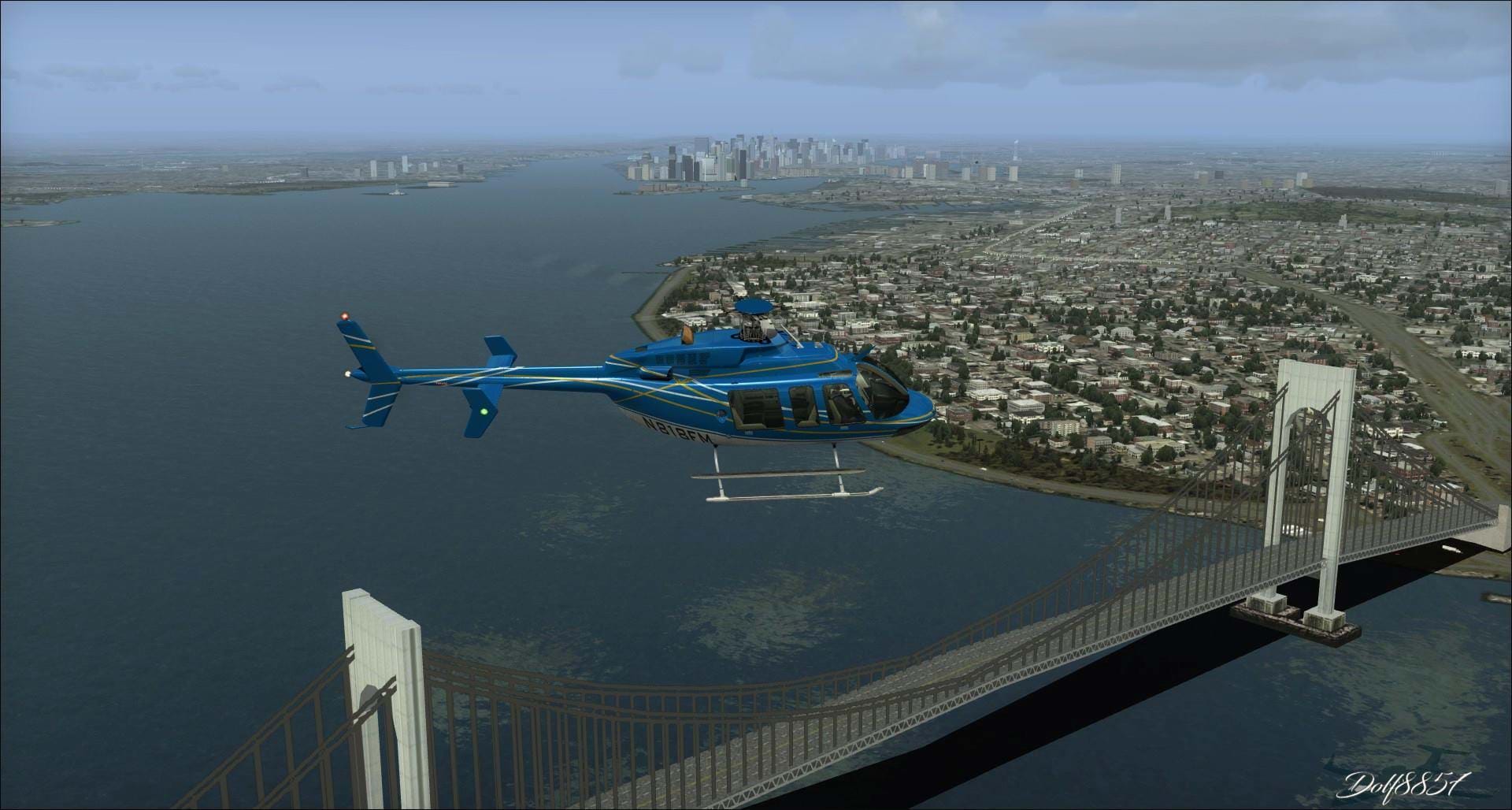 There are several sims out there in the market, each with its own strengths, weaknesses and even purposes.

Let's take a quick look at the available sims.

Note: all the screenshots in this article were provided by flightsim community members in Facebook and Reddit. 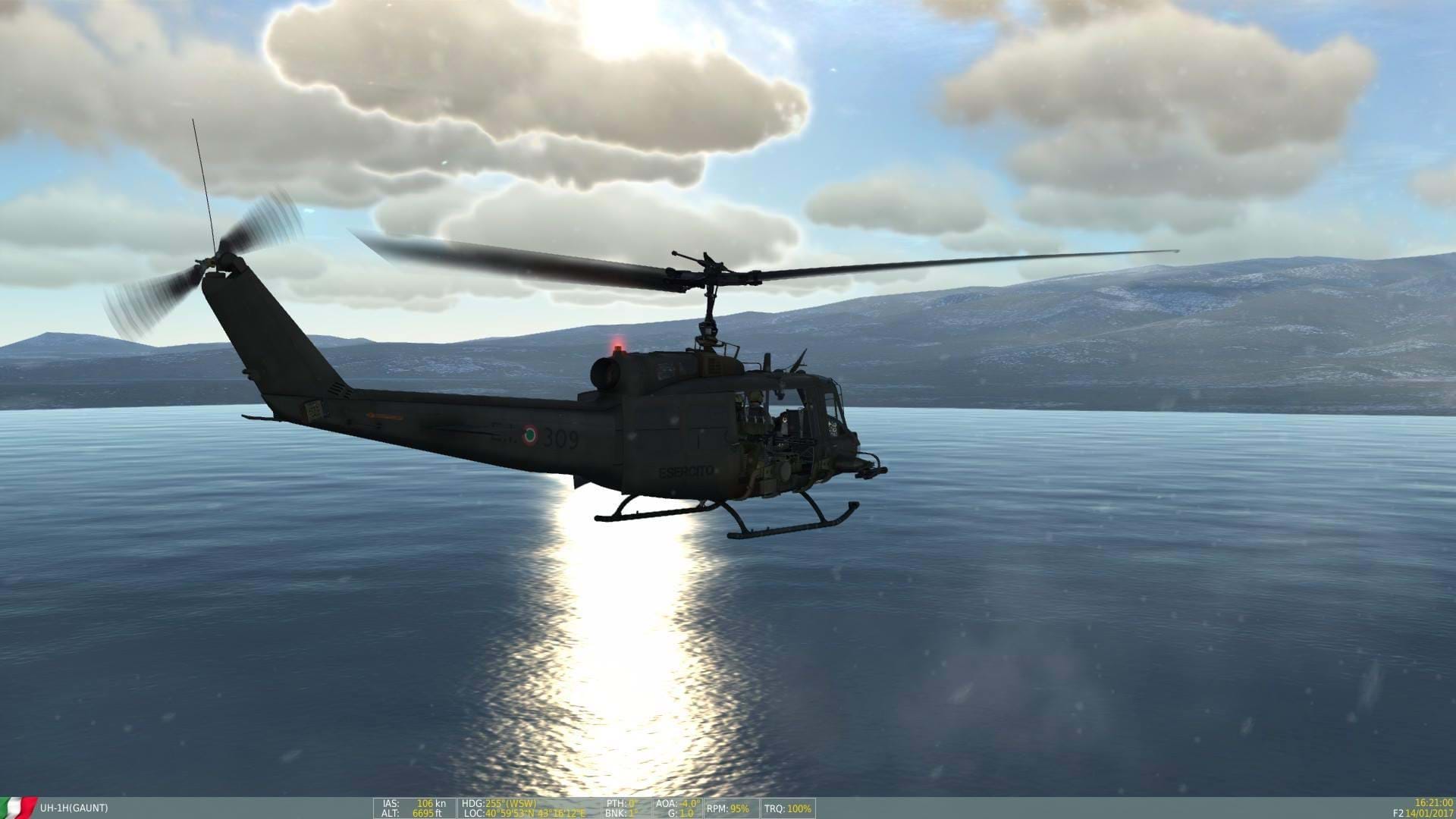 The military section is a small one as there's only one sim that allows us to fly helicopters. That's Eagle Dynamic's Digital Combat Simulator World or DCS World (or just DCS as most pilots call it).

DCS is the grandchild of the 1995 SU-27 Flanker. Eagle Dynamics hit the nail on that sim, making it the best and most realistic combat sim of the illustrious Russian fighter. ED continued developing it, adding new aircraft and, eventually brought it all the way up to what we know as DCS World today.

DCS World keeps on offering the same level of realism and quality as the 1995 sim, but, obviously, updated to the current standards. DCS is one of the most amazing, realistic and good looking sims out there. A lot of people would say it is the most realistic one -- and the best sim, hands down.

I would probably agree with that statement as well. DCS is absolutely stunning and very realistic; this is something that has be attested by real pilots. 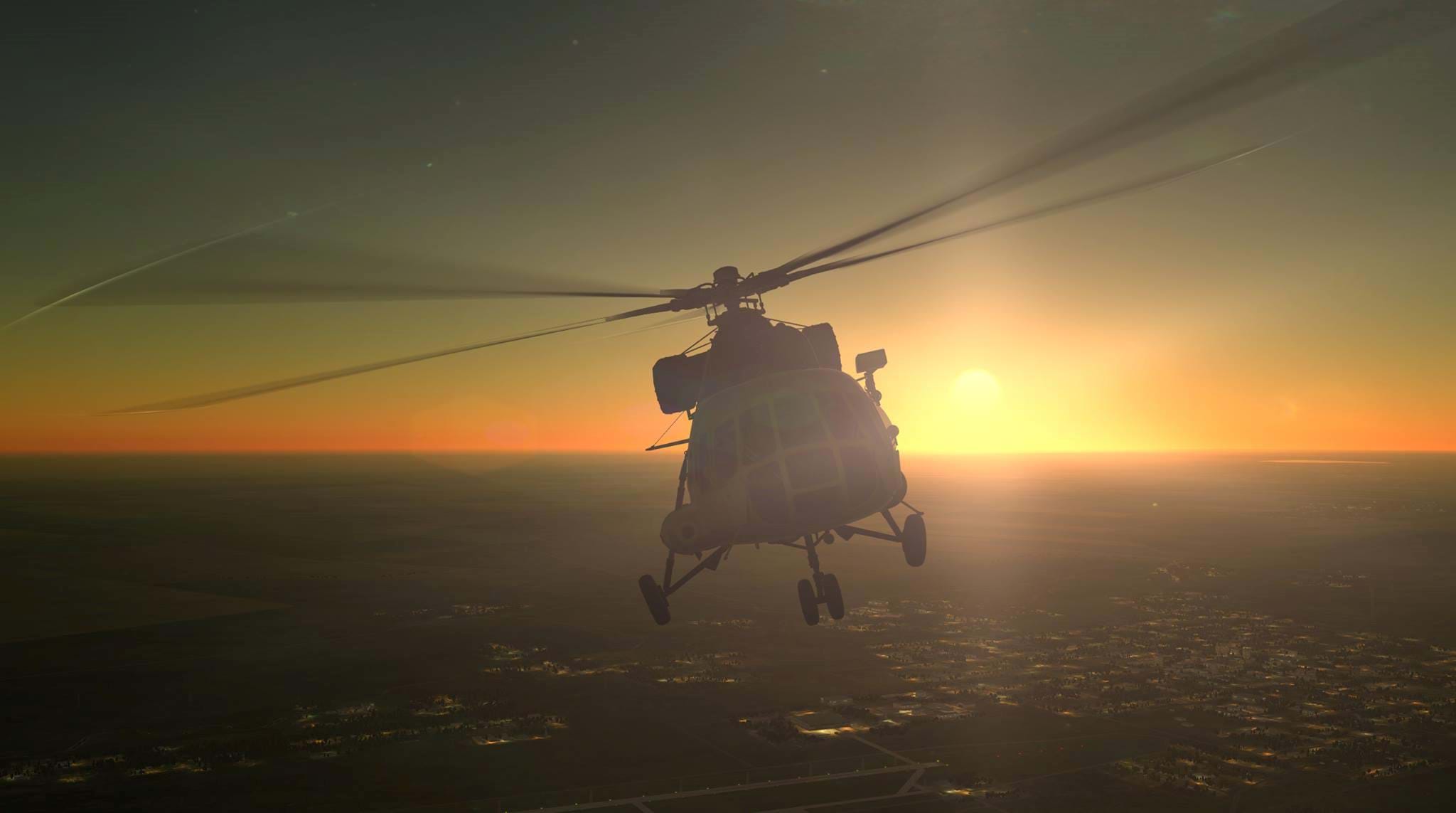 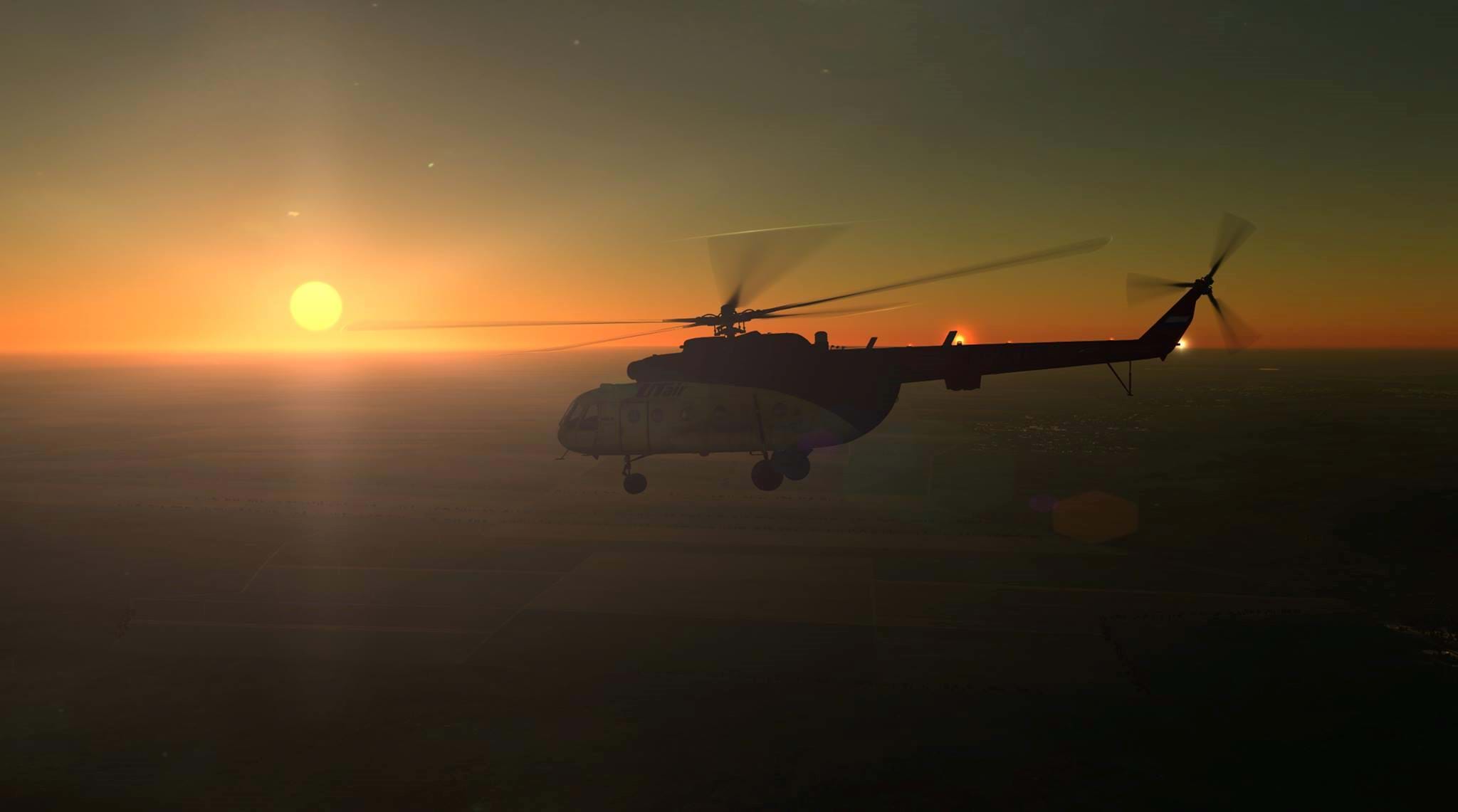 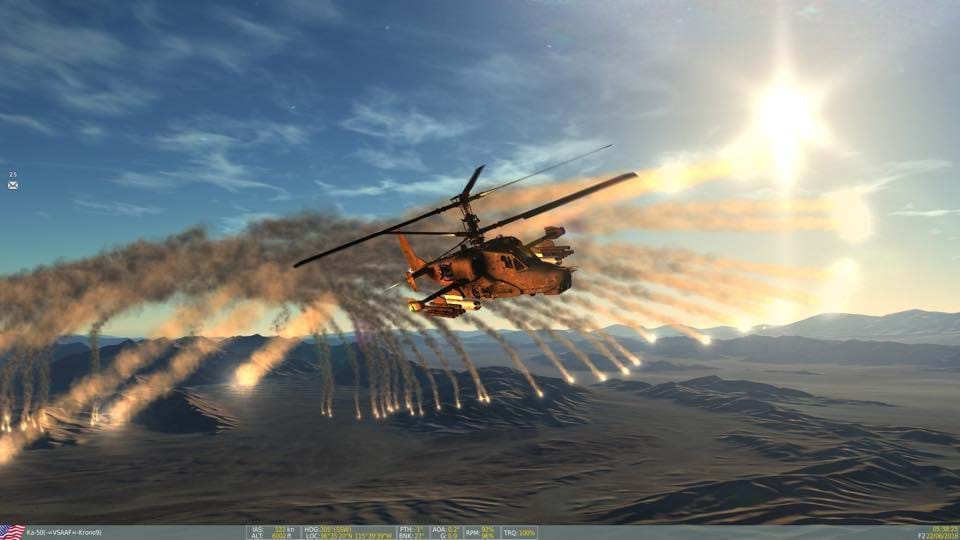 There's something that I should mention which is the fact that you can get DCS for free. Really. There are some limitations, of course, but you can get to fly the SU-25 and the TF-51D aircraft. Granted, these are not helicopter but you can still download it and give it a try to see if it works fine in your computer. You can get DCS World at the official website.

DCS has 4 helicopters available (which you need to buy separately): the KA-50 Black Shark, the Mil-Mi-8MTV2, the notorious UH-1H Huey and the amazing European-designed SA342 Gazelle, which has been constantly updated by Polychop Simulations.

All these modules are highly impressive, extremely realistic and allows you to fly combat missions either alone or with some friends. Since the modules are only developed by licensed developers and coded specifically for each aircraft, it's safe to say that these helicopters are pretty much custom-made with all the bells and whistles.

All this comes with a catch, though; well, a couple of catches, actually. First of all the terrain is very limited. There's only one area available -- part of Georgia, in the Caucasus, with the Nevada Test and Training Range Map being on the works, so you cannot fly the world. Not even close.

The other catch is precisely the amount of aircraft available. All the aircraft -- with the exception of the SU-15 and TF-51D are payware, which can be a bit heavy on the wallet, and there are not a lot coming out. Apart from the 4 listed above, we know that Polychop is working on a BO-105 but there's no word on any other helicopters being developed.

DCS is, therefore, an amazingly good helicopter sim, but with a few nasty shortcomings. But, if you can live with them, we cannot recommend it enough. It's THAT good. No, wait. It's not THAT good. It's even better than that. Are you seriously into helicopter flight simulation? You owe yourself a spin on the Huey or the Gazelle (our DCS favorites).

DCS World is only available in Windows. You can get it here.

Now here's where the sim market shines. All the sims I'll speak of allow you to fly around the world and have quite a few free and payware aircraft available. 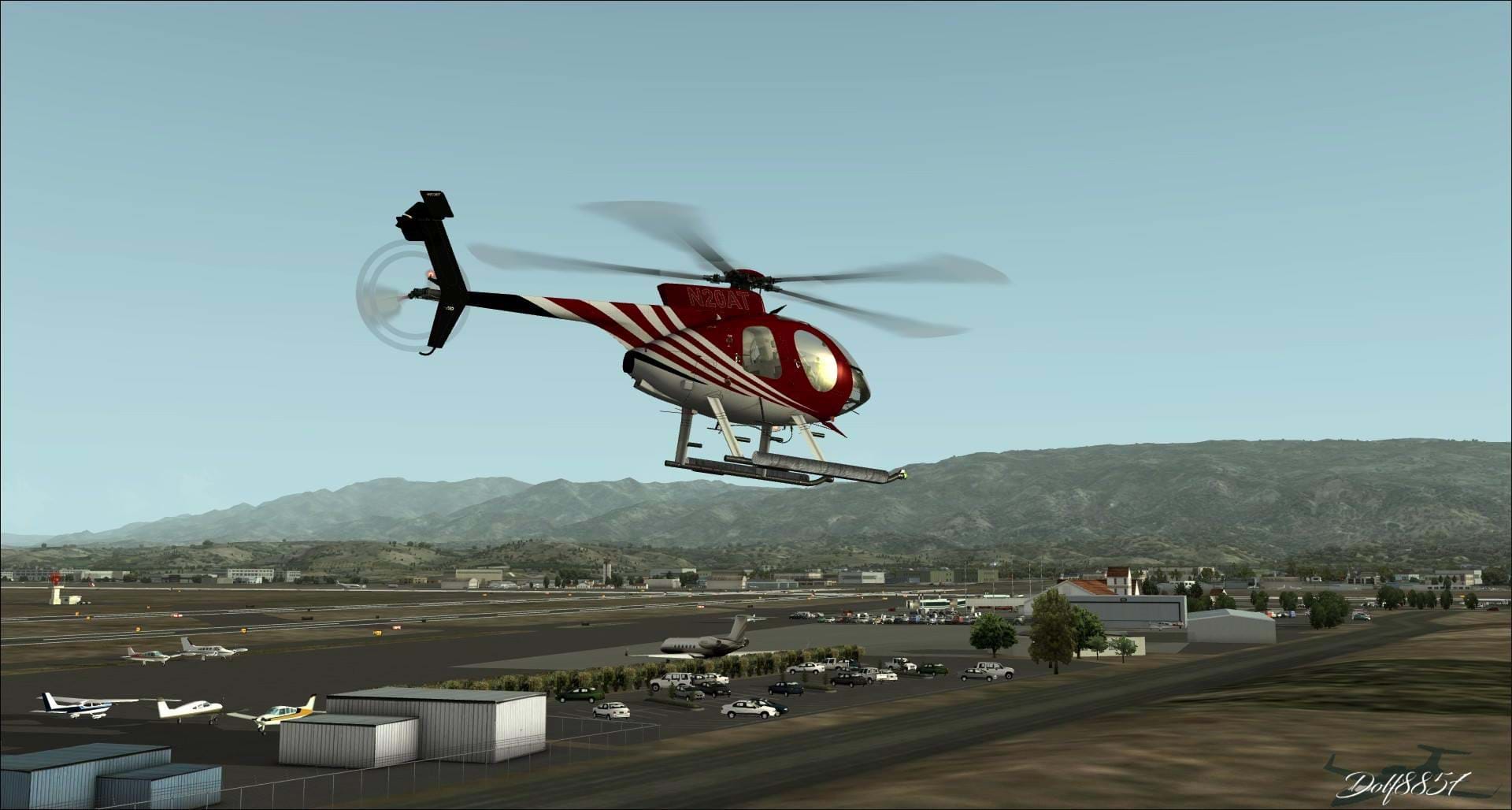 There are a lot of available helicopters for FSX but, due to the limitations in the simulator, the flight characteristics are not that good. Dodosim revolutionized the sim when they released their Advanced 206 and there was a Huey on the works which was never released. The Dodosim Advanced 206 was highly acclaimed by the helicopter community and has shown that it was possible to deliver high quality helicopters, even if it required an external program and extensive hacking.

The Dodo is still the best "out-of-the-box" helicopter out there for FS9 and FSX but there's also another solution for other helicopters.

Picking up on the work performed by Dodosim, which used an external software that connected with FS9 and FSX, Fred Naar released a free piece of software called HTR - Helicopter Total Realism, which allows to build custom flight characteristics for any helicopter available in FSX. 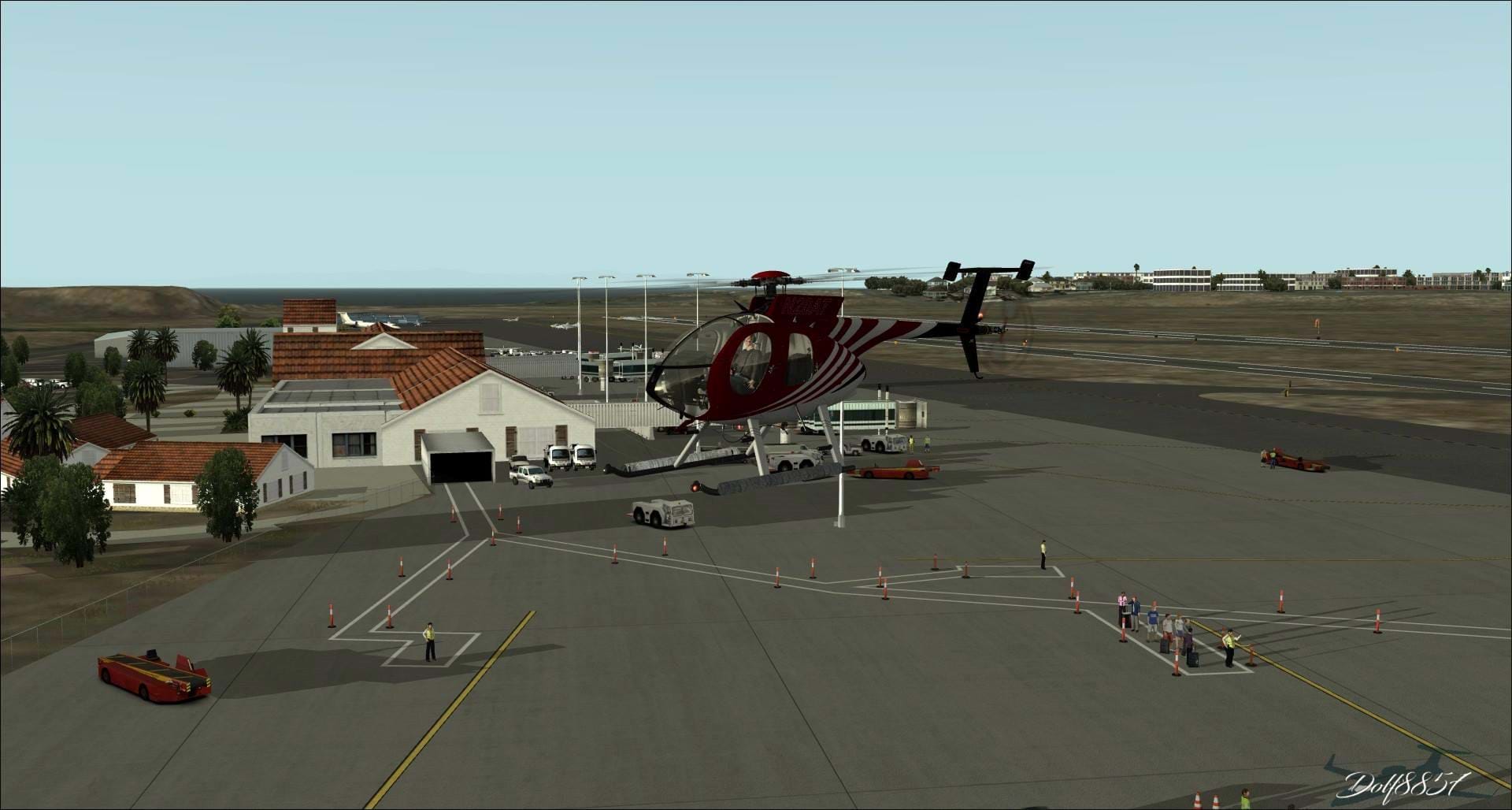 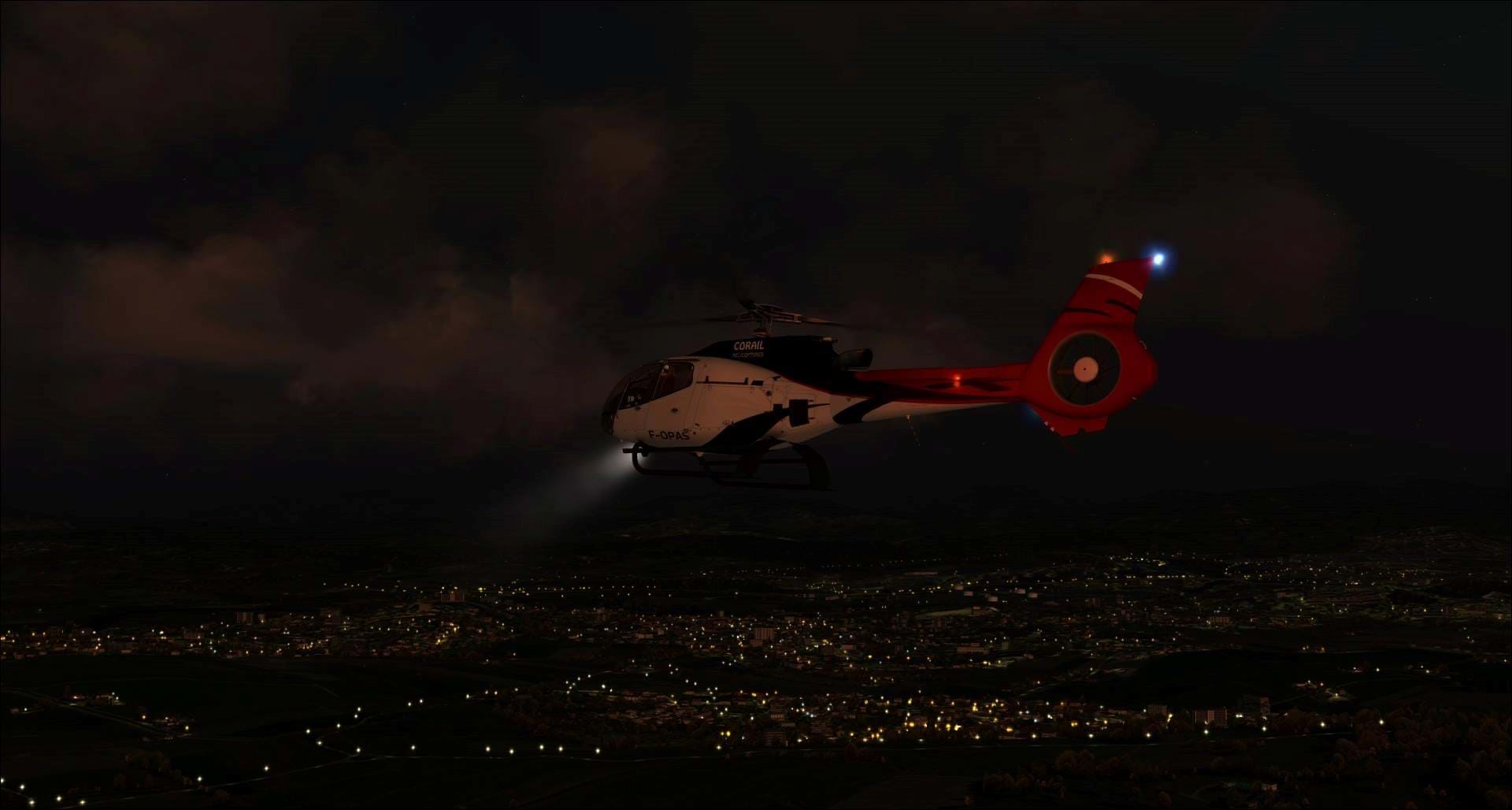 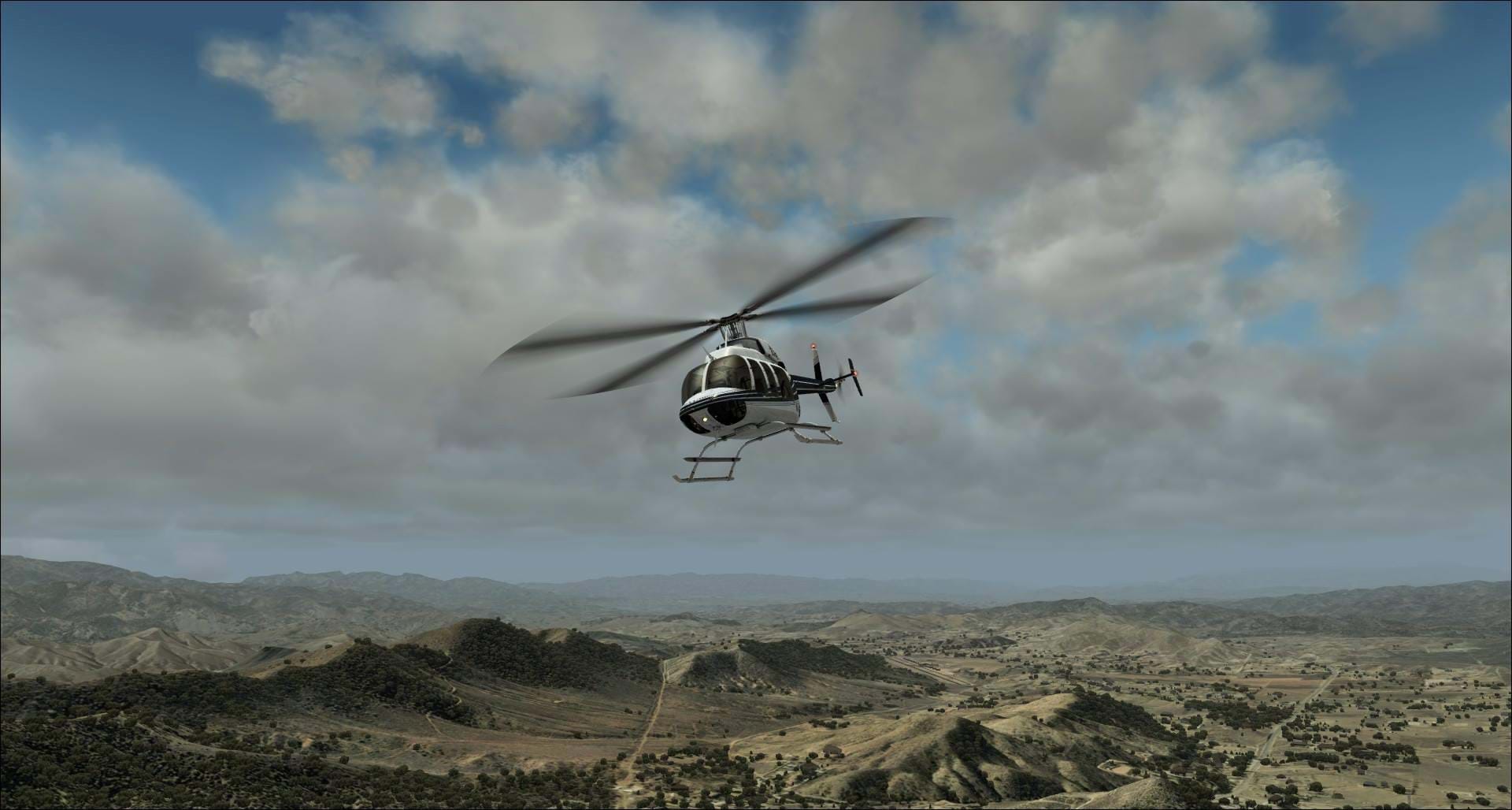 Unfortunately not a lot of users release profiles, so despite being an amazing piece of software that truly transforms -- and vastly improves -- helicopters in FSX and Prepar3D, it lacks the support of the community to become a huge success and transform the world of helicopter pilots in these sims.

The greatest thing about FSX is the fact that has a lot of developers working for it on both aircraft and scenery. It's possible to bring a marvelous amount of realism to the scenery with excellent mesh and texture quality. Companies like ORBX completely transform the landscape and make FSX one of the most enjoyable sims to fly in.

FSX is available for Windows only. You can get the Steam version (which I highly recommend you do if you want to get FSX) here. 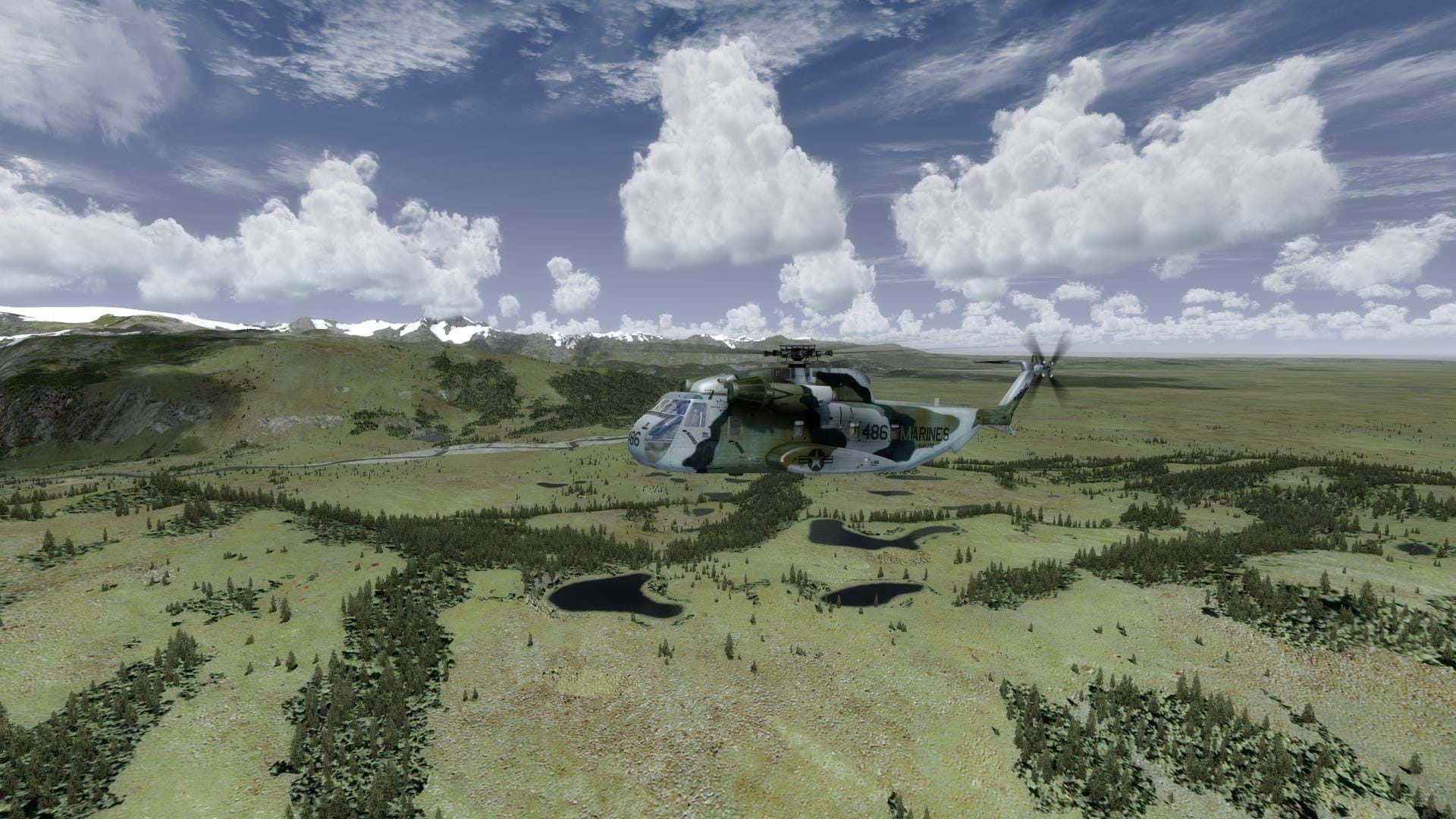 Prepar3D or P3D is pretty much FSX on steroids. Lockheed licensed ESP, which was the professional/teaching arm of FSX and started to update its engine and features, making it more of a tool for student pilots.

Despite the updates, P3D still suffers from the poor helicopter flight characteristics but the upside is that pretty much everything that's made for FSX is compatible with P3D and vice-versa. So, there's a LOT of aircraft and scenery available. With the improved graphics engine, P3D can easily become a gorgeous sim, with great scenery for us helicopter pilots to fly around -- if you can see past the flight limitations. 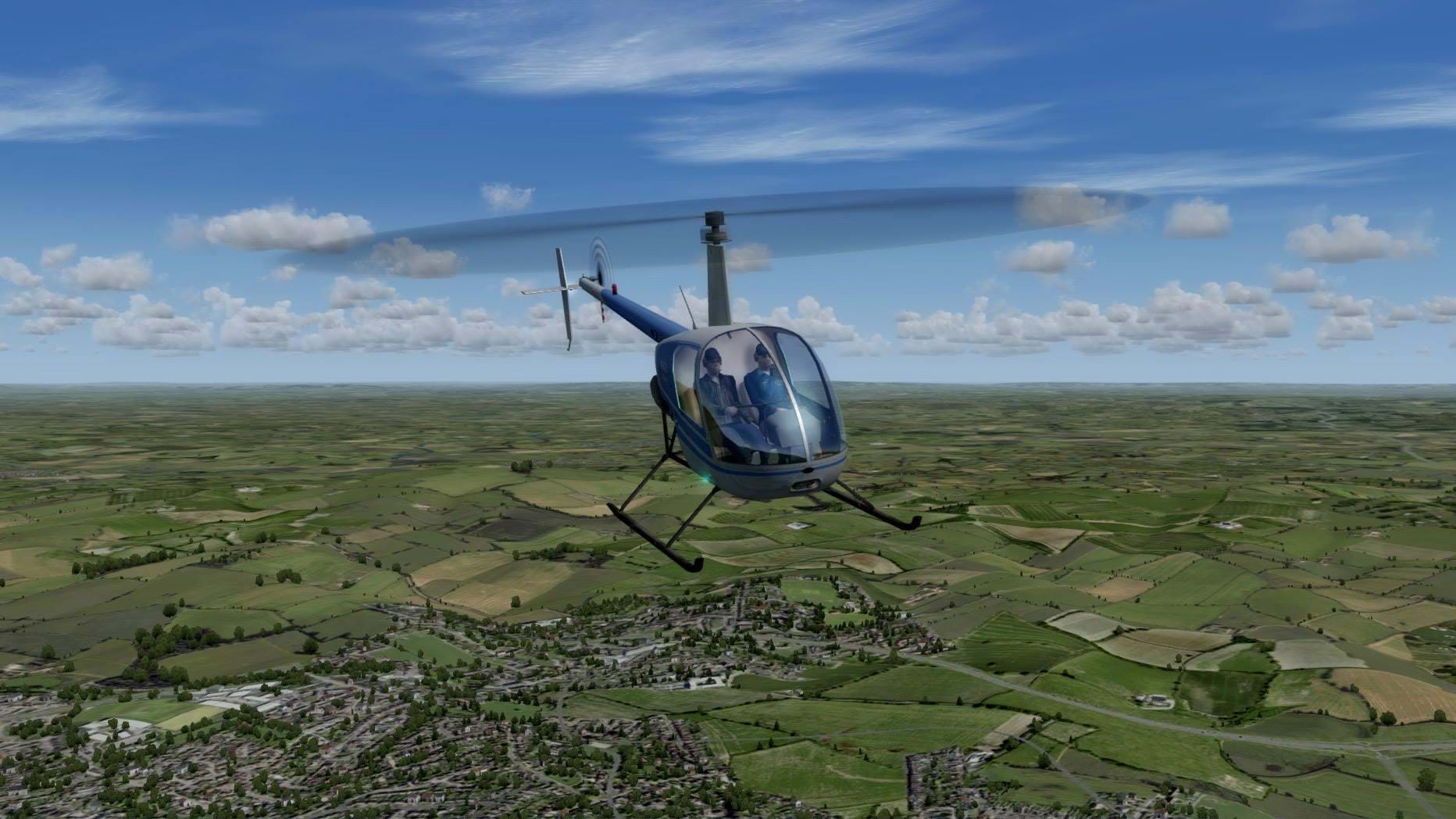 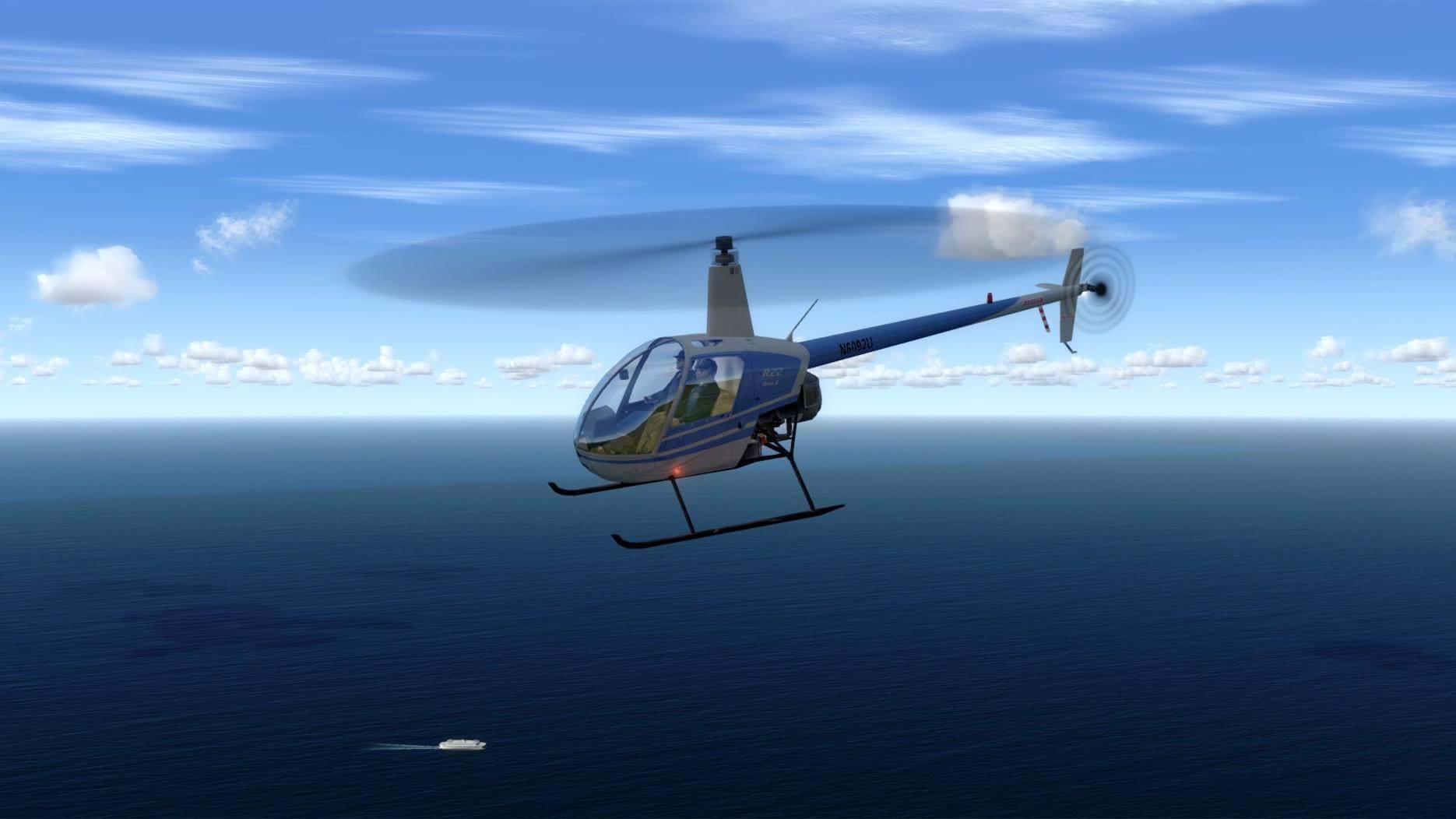 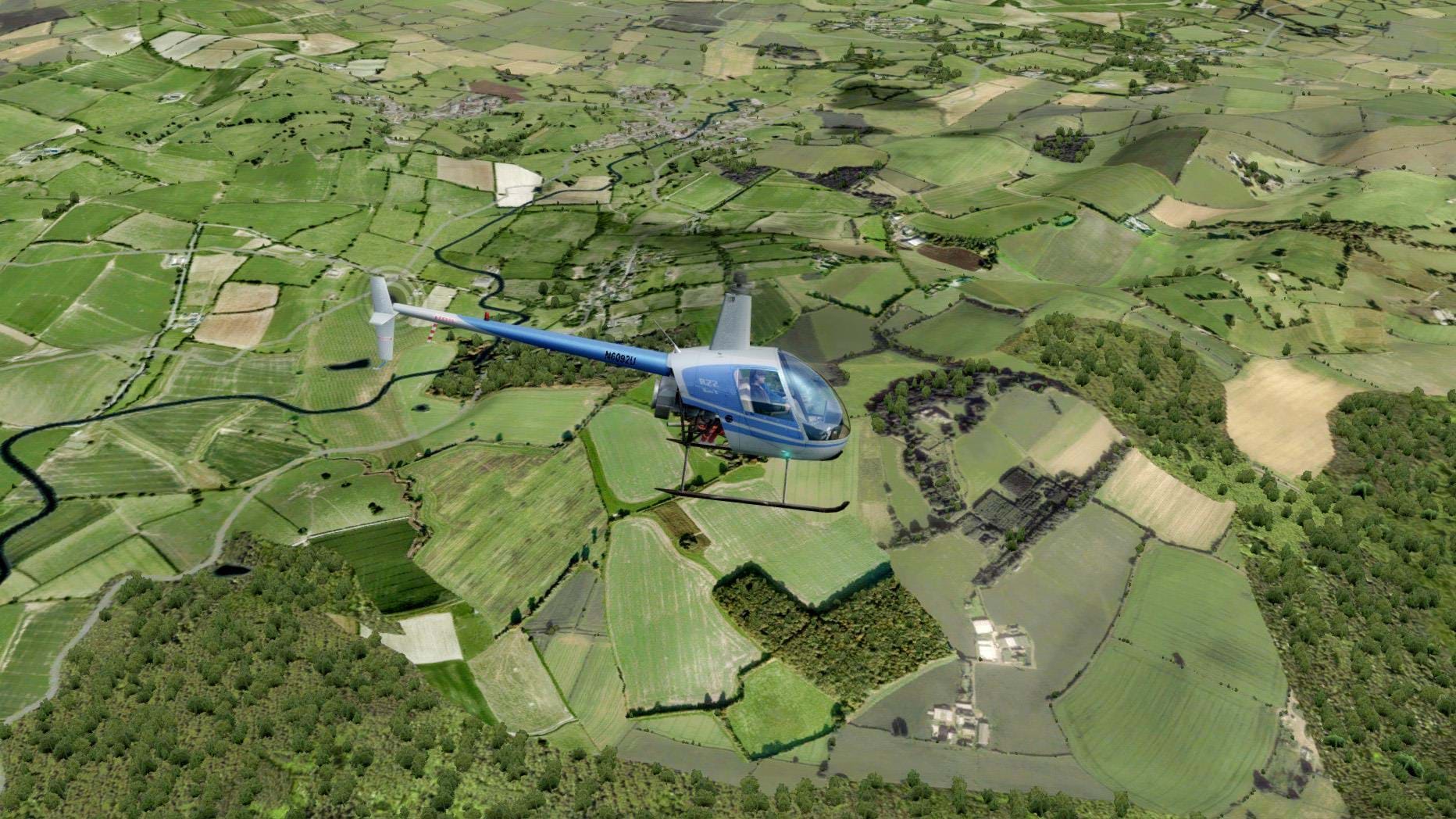 You can purchase it here. P3D is only available for Windows.

X-Plane is FSX's and P3D's big contender. For helicopter pilots, though, X-Plane is much better regarding the flight characteristics. It's pretty much a dream for us, with great features that allow us to have realistic aircraft. With companies like DreamFoil Creations, releasing increasingly better quality products, helicopters in X-Plane are quickly becoming more complex and very interesting to fly.

It's possible to perform hoisting or fire-fighting operations, so X-Plane brings quite a lot on the table when compared with the other sims. 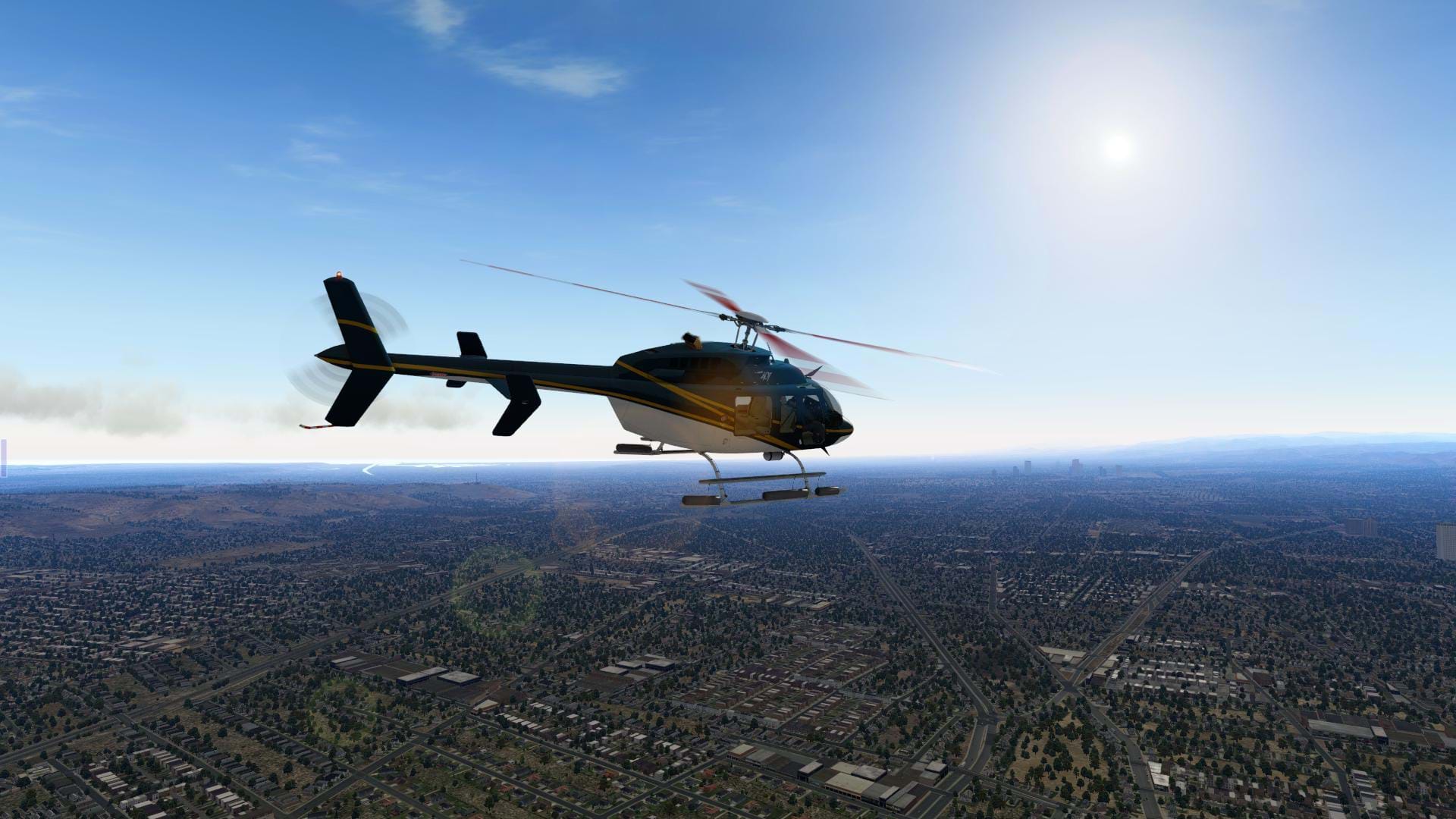 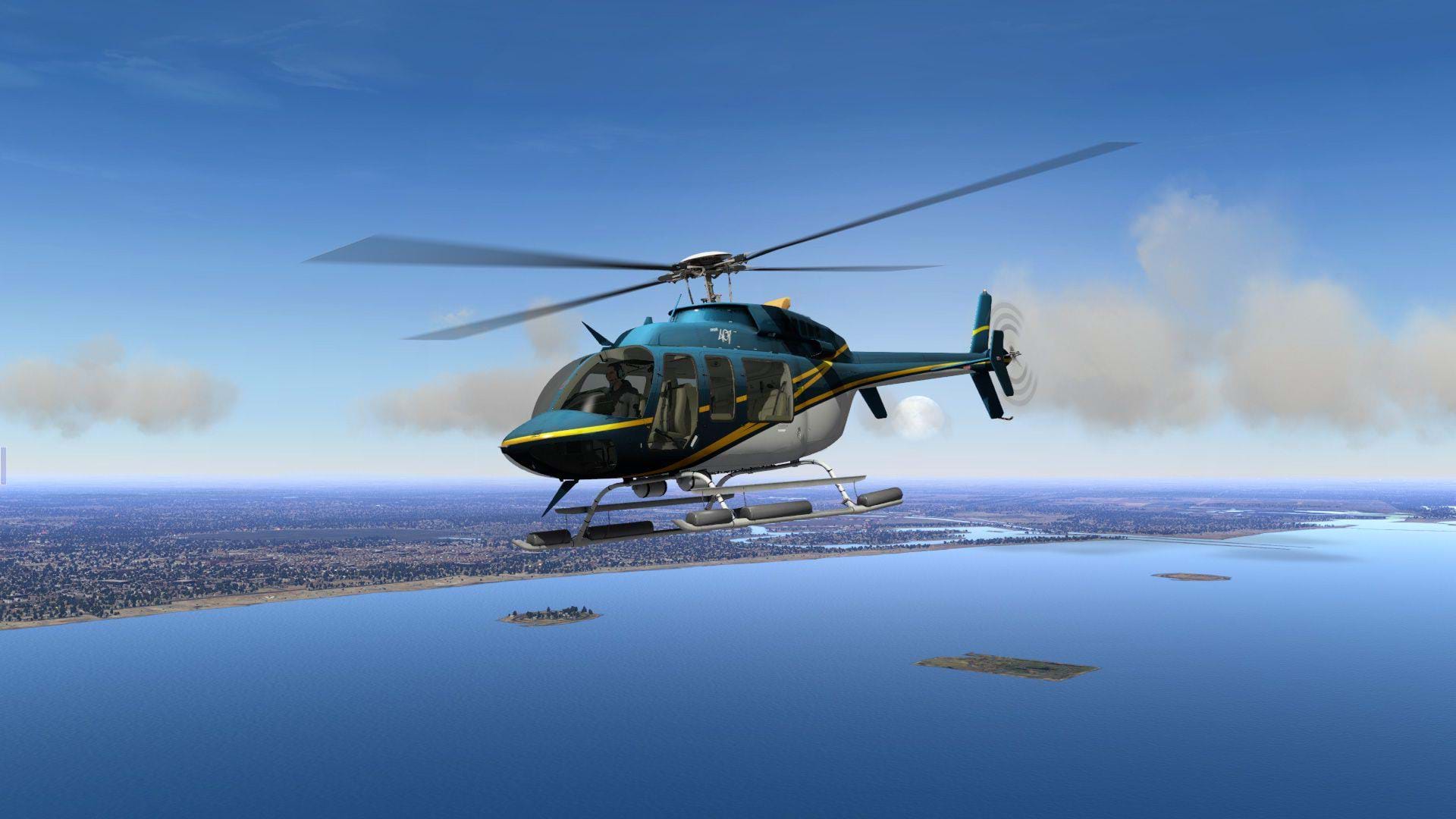 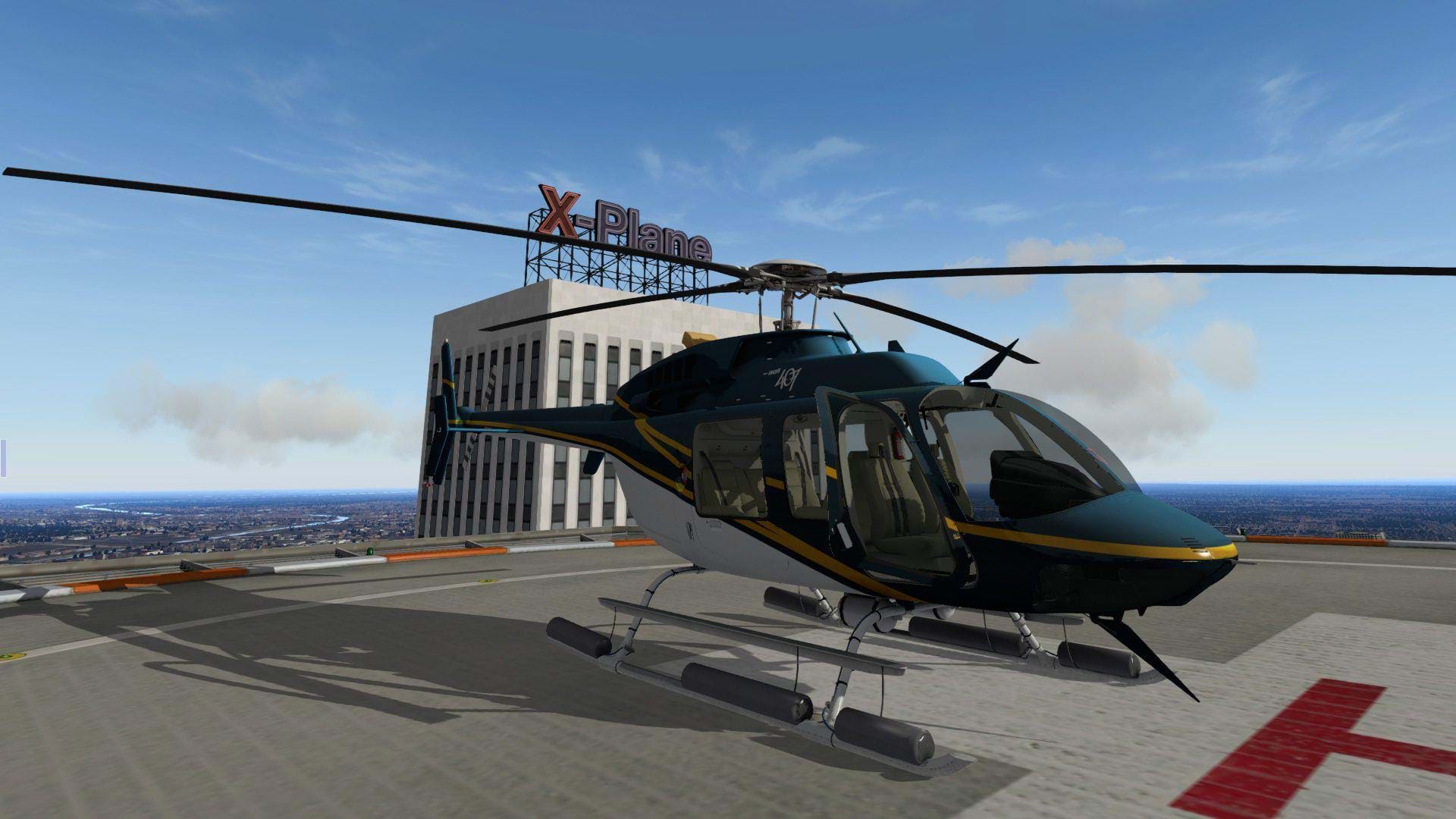 The downside? Scenery. X-Plane's default scenery is as bad as FSX's default scenery (or worse) but with a bigger problem: the amount of high quality scenery out there is pretty low. X-Plane needs someone like ORBX to start working on it. With some better scenery, X-Plane can become the (almost) perfect civilian helicopter flight simulator. All the rest is there: realistic startups, flight model, the works.

Bonus: you can download the X-Plane demo for free and try it out before committing to buy it. You can get the demo here, and purchase it here.

X-Plane is available for Windows, OSX and Linux. 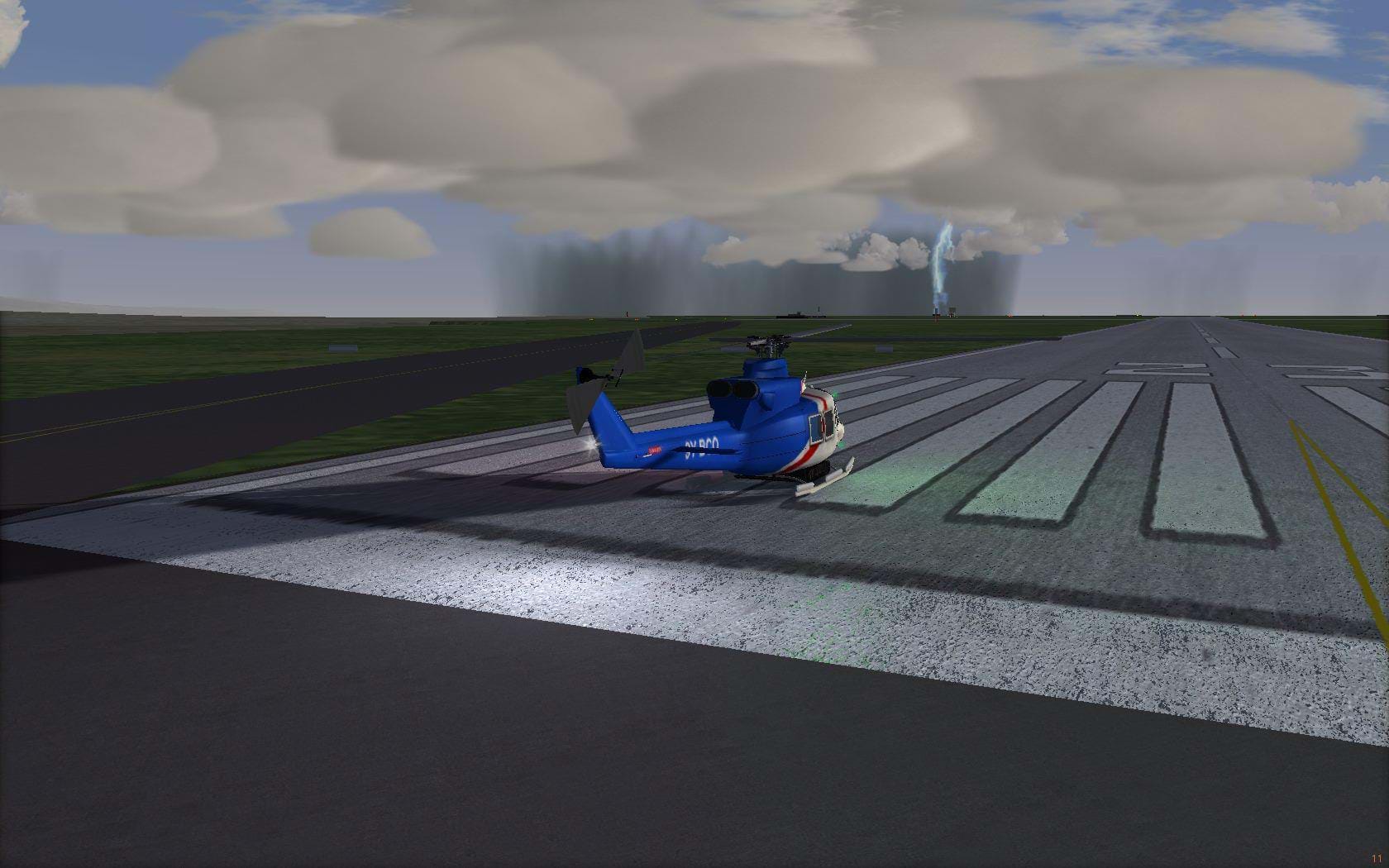 FlightGear is somewhat of the "rogue" sim of the bunch. Of all the simulations presented here, this is the only one that's free and open-source.

The helicopter flight model is pretty good but the aircraft and scenery offer is one of its weak points. I have yet to find a helicopter with fully functional virtual cockpit and realistic startup and shutdown. The graphics engine can also be a major turn-off for some virtual pilots. Nonetheless, it's still a good choice for those that want to start flying helicopters -- or flight sims in general.

It's not up-to-pair with the commercial sims yet, but the potential is there. 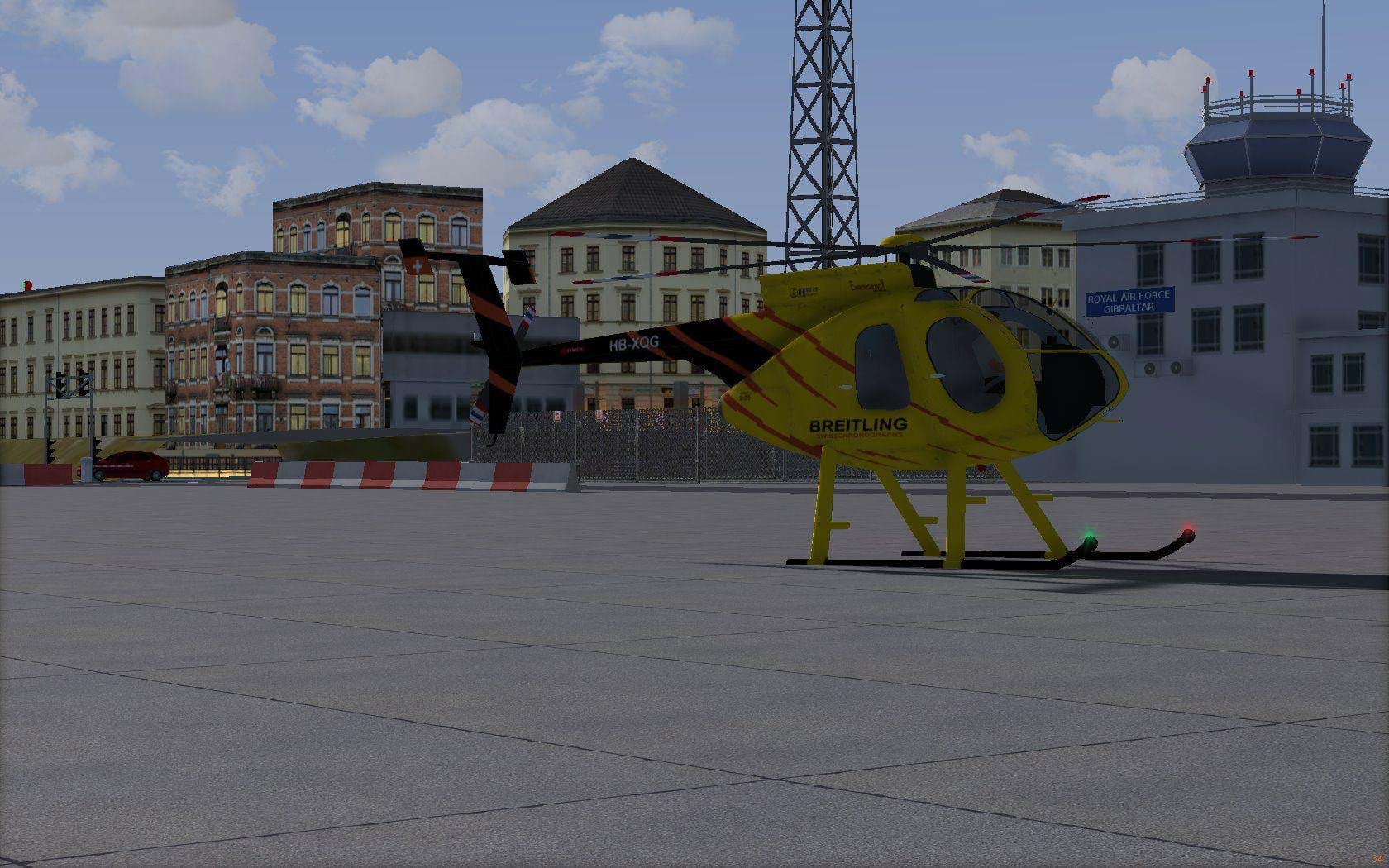 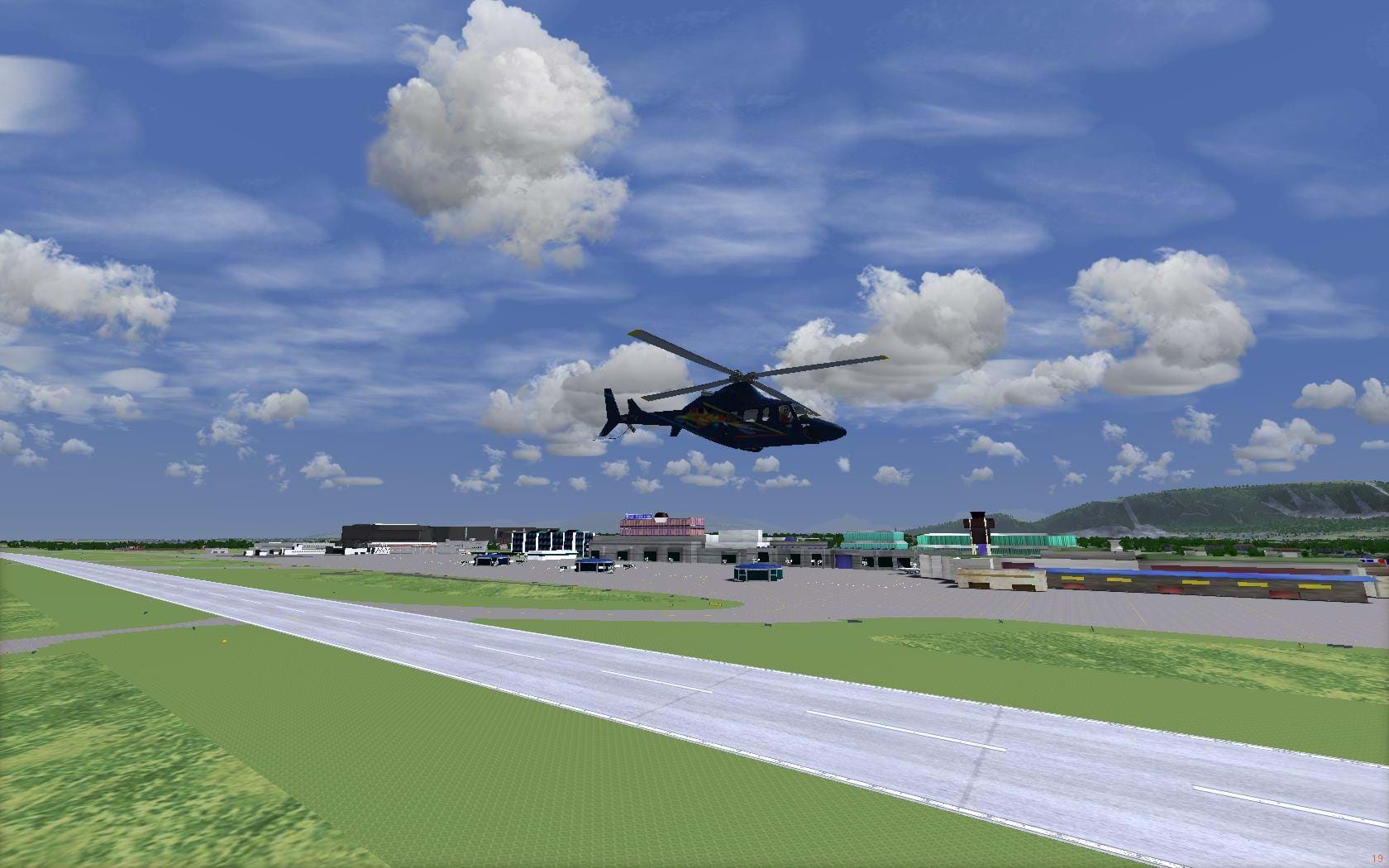 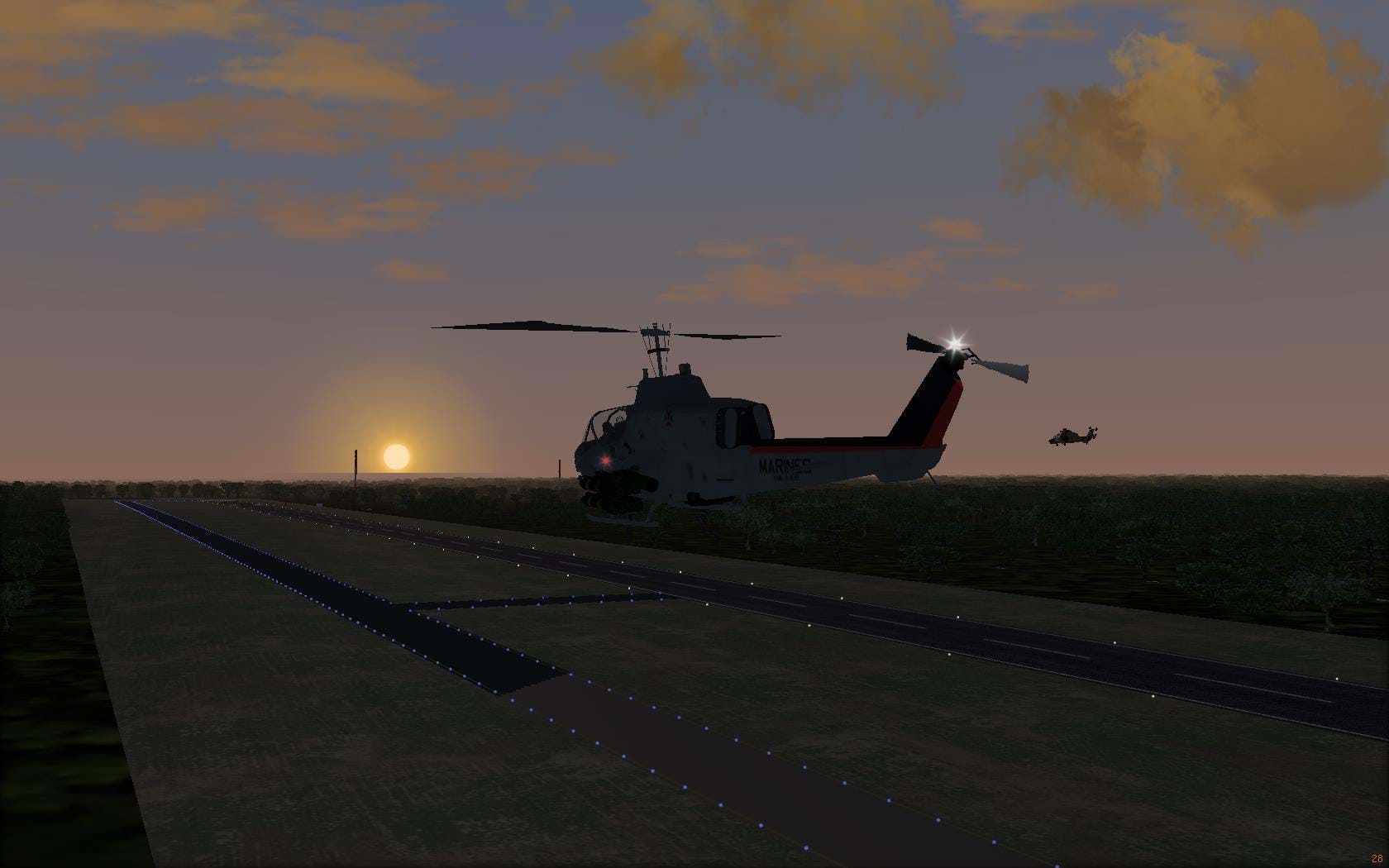 I thought it would be good to mention it here for the price/quality ratio. But, when put along with the other sims, FlightGear has still a lot of ground to cover.

FlightGear is available for Windows, OSX and Linux. You can get it (for free) here.

When putting everything on a scale: flight model characteristics, scenery, overall quality, a winner comes out: I believe X-Plane is the best simulator for helicopters. This is an opinion that is shared with other people not only in HeliSimmer but the helicopter flight simulation community as well.

It's weakest point, right now, is the poor scenery. I dream of a day in which companies like ORBX wake up, start to see X-Plane's potential and start working on new and gorgeous scenery add-ons for this sim, making it absolutely unstoppable.

So if you want to fly realistic helicopters all over the world with a decent (not brilliant) scenery, X-Plane is your sim.

If you can live with a very limited scenery and maybe just one or two helicopters (of a list of four at the moment), do go with DCS. If DCS offered a world-wide experience and an open third-party-addon policy, it could become the best sim out there. Military or civilian.

For now, we'll have to keep on going with X-Plane and its dull scenery. 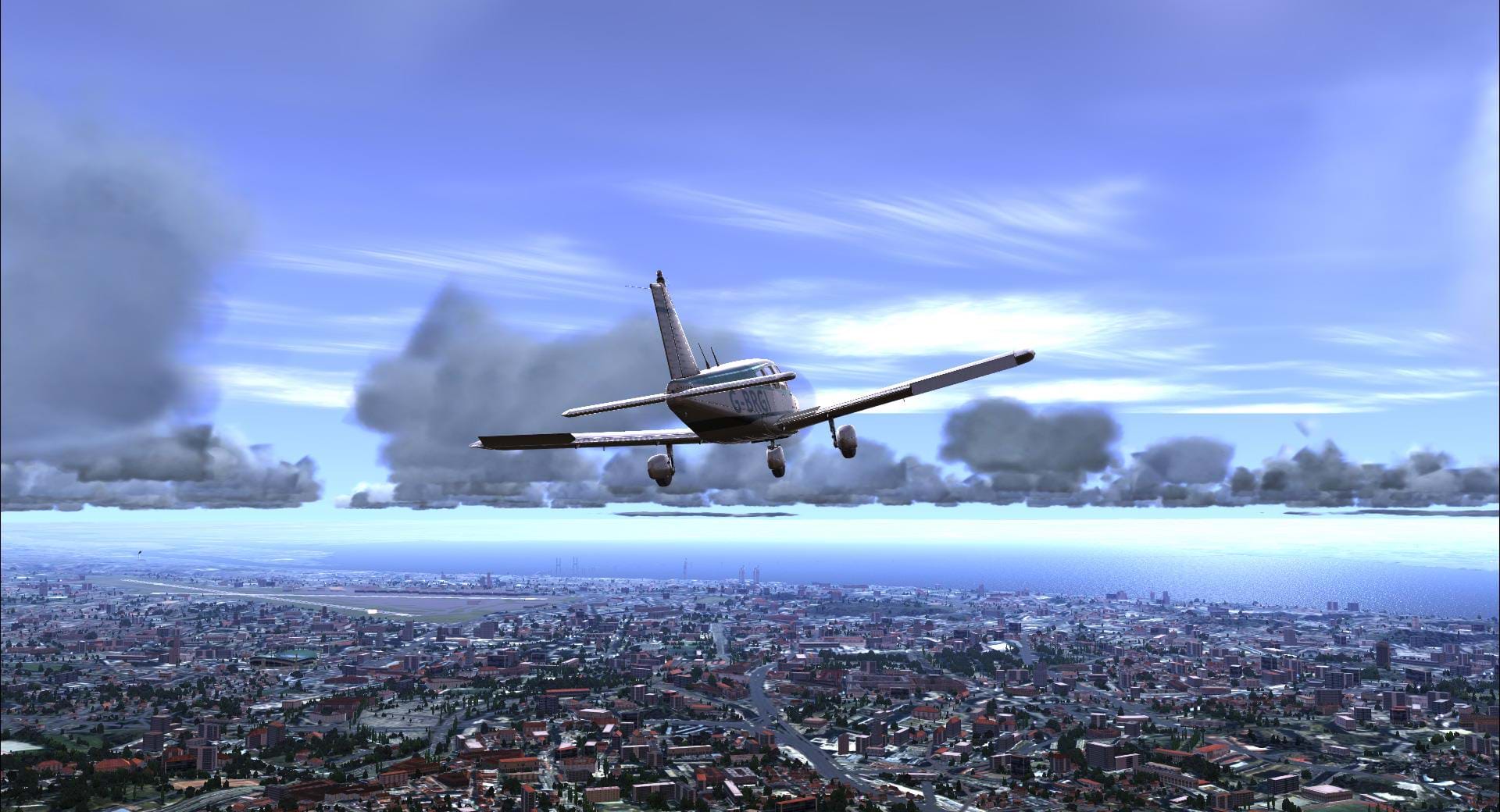 I know, I know. That's not an helicopter. I'm so sorry about that! That's a screenshot of Dovetail Games Flight school and there are no helicopters there (yet?).

DTG is evolving Flight School. They have released their first dual engine aircraft and, hopefully, they will continue to bring more and more complex machines. Perhaps even, someday, a helicopter.

Now, don't get your hopes too high just yet. Dovetail Games knows they have to work on helicopters but they are not jumping at it right away (I swear I have no clue about the guy they are talking about that nagged poor Steve about helicopters all the time <whistles innocently>).

Dovetail Games does seem to have helicopters on their list and they will eventually get to it. And, when they do, and if they do it properly, they can just become a very, very tough contender. I would say they have the potential to become the best helicopter simulator in the market. The balls is on your side, folks.

Right now? I'm all in for X-Plane.